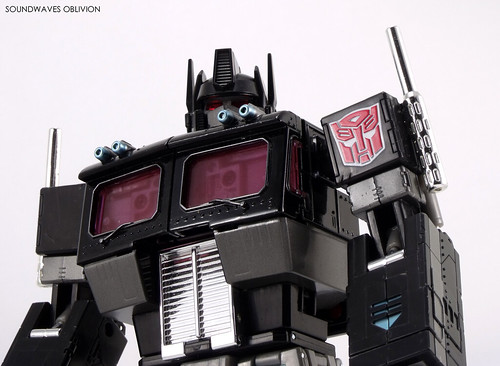 Profile (Translated from the Trading Card)
MP-1B Cybertron General Commander Convoy Black Version
Function: Cybertron General Commander
Motto: "Freedom is the right of all sentient beings."
Profile:
Has taken it upon himself to protect all life forms including those on Earth; constantly fighting to defeat the Destrons. Can separate into 3 self-contained modules. Convoy can function without the other 2 modules however they will cease to function if Convoy is inactive.
STR...10; INT...10; SPD...8; END...10; RNK...10; CRG...10; FPR...8; SKL...10 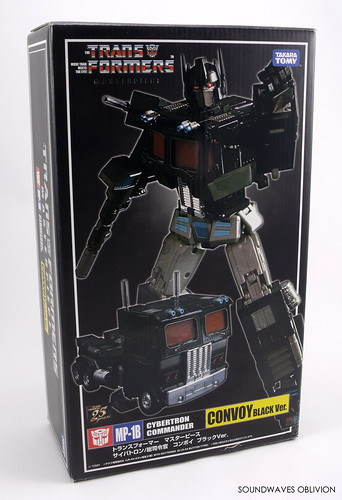 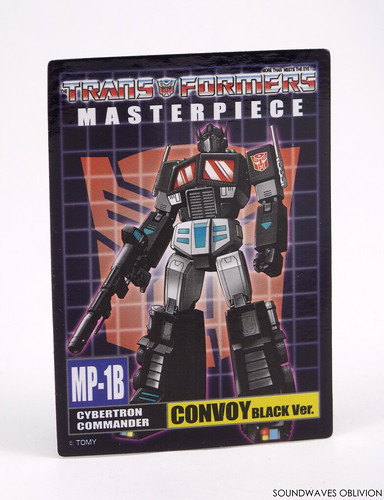 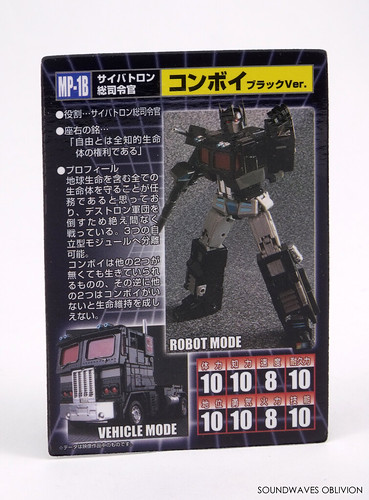 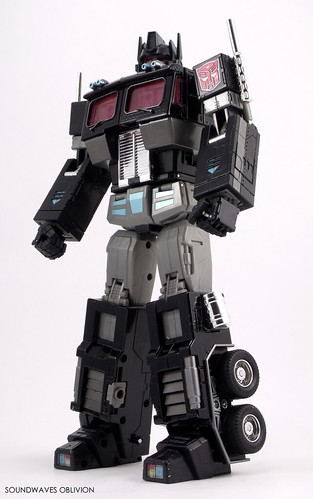 MP-1B Convoy Black Version was an e-Hobby exclusive which was announced at the beginning of August 2009 and was scheduled for release in January 2010. The e-Hobby version came with an exclusive comic book written by Naoto Sakai and illustrated by Hidetsugu Yoshioka. 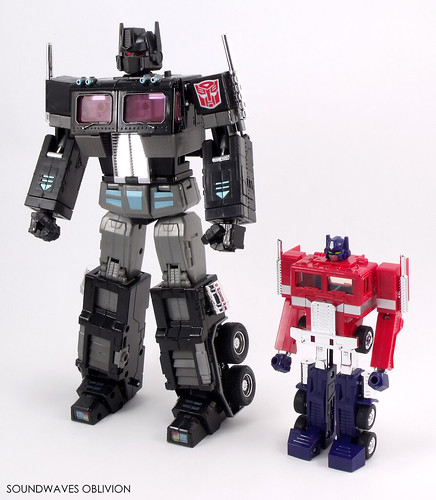 Despite being an e-Hobby exclusive, MP-1B was released first by Hasbro Asia in late November 2009. This version was identical to the e-Hobby release but instead of a comic it came with a die-cast metal plaque and a velvet bag. 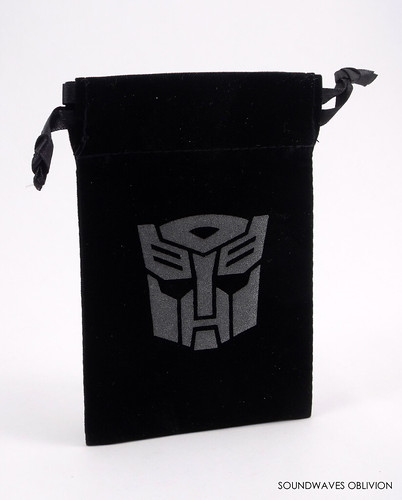 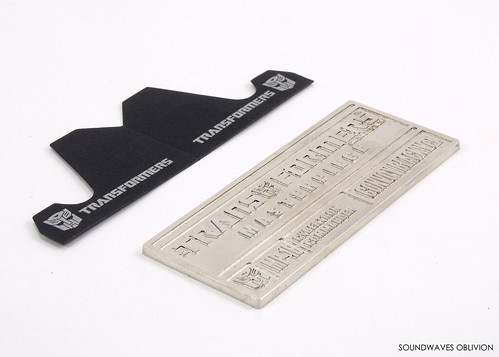 The character card that came with the figure is identical (other than the artwork) to MP-1 Convoy so you could easily assume this black version of Convoy was the original Convoy. However the story was only expanded upon in the e-Hobby comic. The reverse of the comic also has a profile for MP-1B Convoy but the text is identical to the character card. Within the comic MP-1B Convoy has been given artificial intelligence using the mind of "Dan" a human who we can assume (although it is not explicitly stated) to be Daniel Witwicky especially as it mentions using an Exo-Suit. 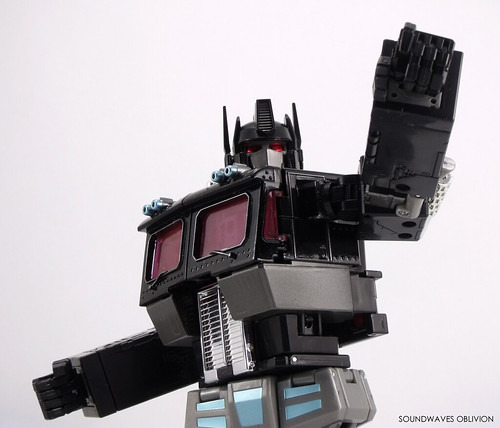 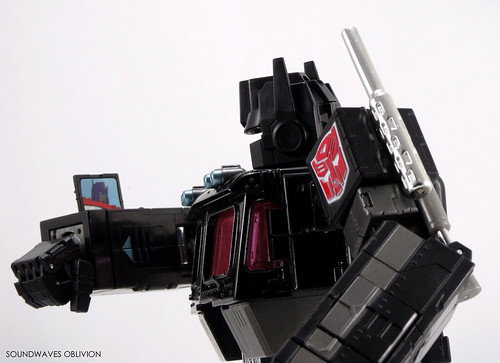 Packaged in robot mode, Convoy is huge by today's standards and the black, grey and teal colour scheme broken up by the large red Cybertron insignia look very impressive. The colour scheme is identical to Black Convoy who would eventually make an appearance in the Masterpiece line in 2013. Convoy comes with the same accessories as MP-1 although in different colours. The Energy Axe is now in translucent red, the Megatron gun is a much darker gunmetal colour and the Matrix is purple with a red core. The Ion Blaster retains its grey colour though the coloured plastic inside the end of the barrel is red instead of blue. 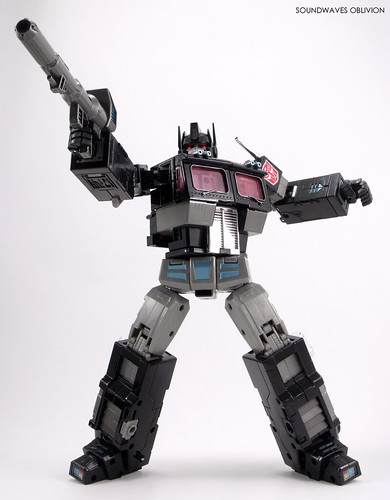 The wrist communicators have been updated and show Convoy on his right wrist and Rodimus Convoy on his left. I found the Matrix on mine really hard to remove than my MP-1 version. 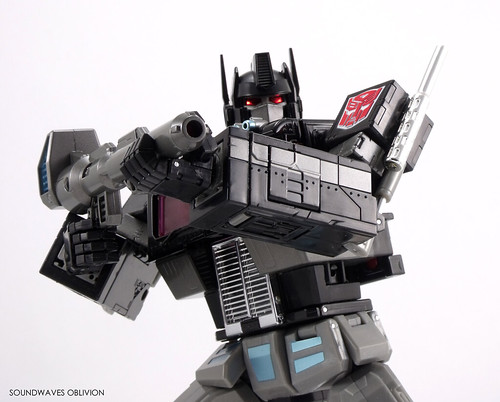 Transformation to truck mode is still straightforward although its weight (over 1 kg) makes it rather awkward. The panel on the robot back where you fold the head into has a tendency to pop off on my version but it is easy enough to clip back on. 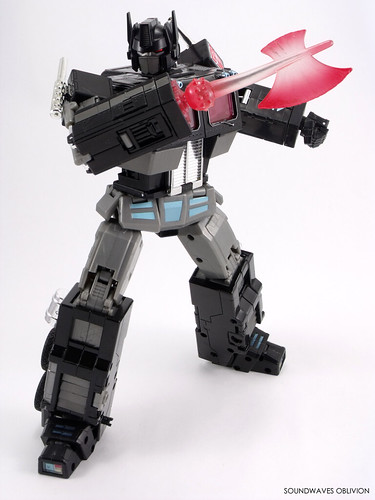 Truck mode is the weakest feature of MP-1B and was vastly improved with MP-10 and MP-44. Unfortunately MP-1B does not come with a trailer as such but like MP-1, the cardboard insert can form a trailer which you can clip onto the trailer hitch. The colours of this trailer are black and red, and is based on the 2007 T.H.S-02B Convoy Black Version trailer. 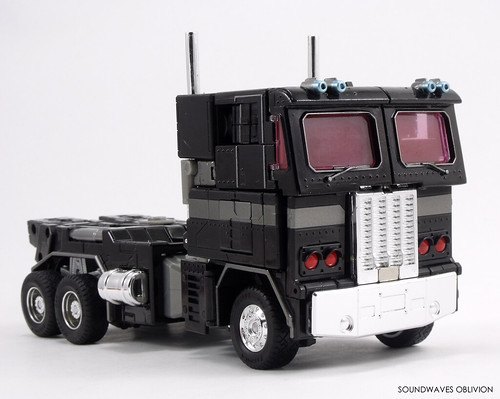 Overall MP-1B Convoy is a fantastic figure although I do find MP-10B the more superior figure. 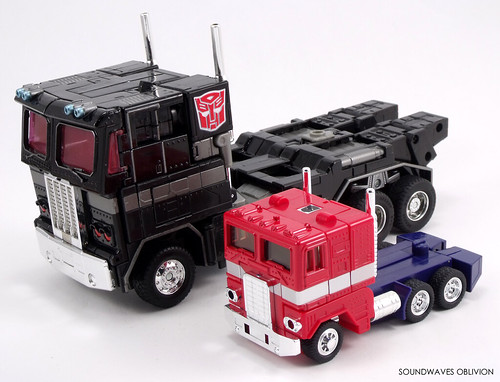 e-Hobby Shop: Original Comic
Story:
The appearance of Galvatron II motivated the weakened Destrons and they regrouped and once again ravaged energy resources across various locations. The Cybertrons, outmatched by the relentless Destrons, made Laser Ultra Magnus realise the gravity of the situation. Ga’Mede devised a psychological stratagem to combat the Destron threat. It was an ingenious plan to use the Destrons' fear of “Convoy” against them. The plan was to dispatch “Convoy” Type “Eldedroids” to the various locations under threat from the Destrons. After the initial Eldedroid Convoy was built, Wheeljack used his Duplication Machine to create more, one by one, until there were 21 in number and ready to mobilise. Operated by Flipsides back at headquarters, each Eldedroid left for their mission.
The comic was released with both Japanese and English text although the English translation was pretty rough. I've translated this myself and have hosted it on my main website. 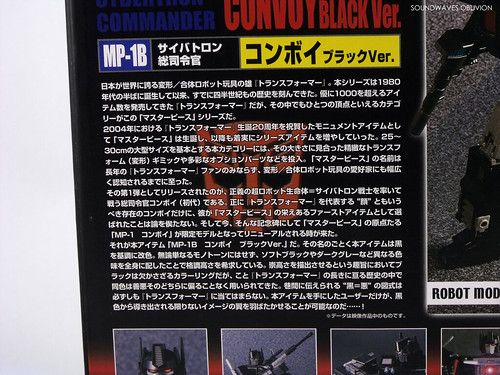 Back of the Box Translation
“Transformers” is Japan’s most famous transforming / combining robot toyline. The series has been going for a quarter of a century since its inception in the mid 1980’s. The “Transformers” has already seen over 1000 characters released and the “Masterpiece” brand is the pinnacle of the series. The Masterpiece brand was created to commemorate the “Transformers” 20th anniversary in 2004 and the series has been steadily expanding ever since. This category specifically focuses on figures between 25 to 30cm in height with elaborate transformations which compliment the figure’s size; and also included are various optional accessories. The brand “Masterpiece” is not just well known by lifelong “Transformer” enthusiasts but also by fans of other transforming / combining robots. General Commander Convoy (G1), leader of the Cybertrons and a Super Robot Lifeform who believes in justice was the first to be released. Convoy is the face of the “Transformers” universe so it should be no surprise that he would be the first to represent the Masterpiece brand. Now has come the time to relaunch this commemorative Masterpiece “MP-1 Convoy” as a limited edition model. “MP-1B Convoy Black Ver” is that item. As the name implies Convoy has a new black colour scheme. Instead of a monotone colour scheme, different colours have been utilised such as soft blacks and dark greys to create a sense of prestige. In the long history of the “Transformers”, black has been used for both good and evil characters. Here, black is used to portray a sense of majesty. The general consensus of black equals evil does not necessarily apply to the “Transformers”. Only those who have this item in hand will be able to let their imagination loose and have a great time with this black recolour……….! 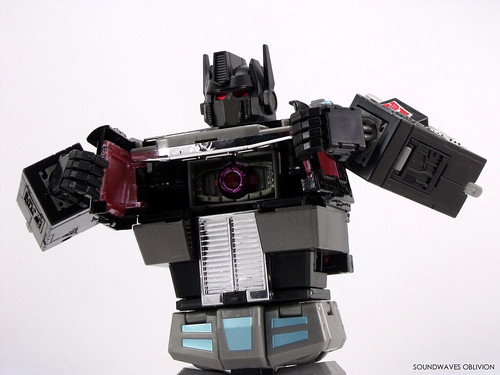