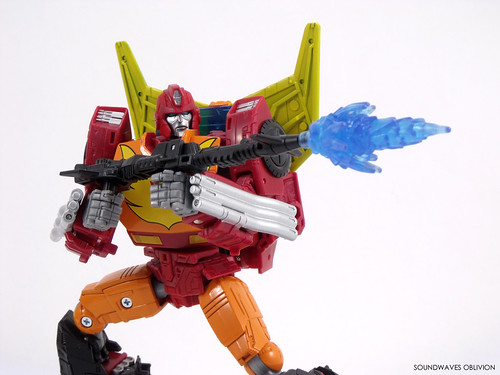 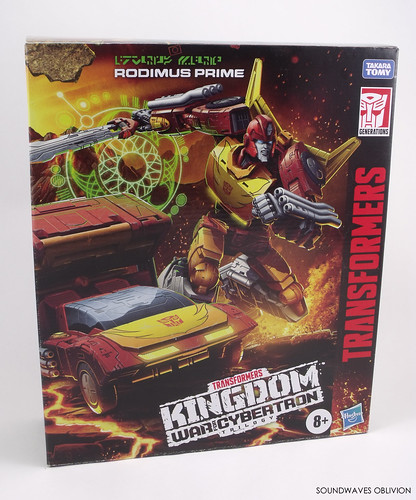 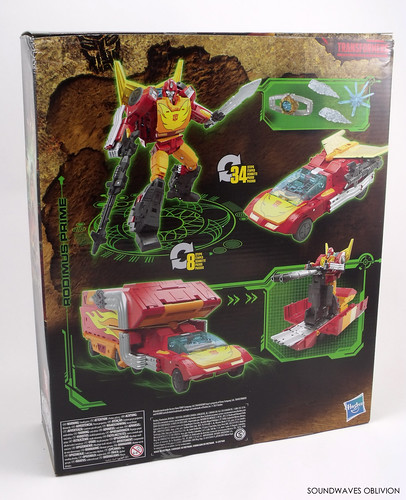 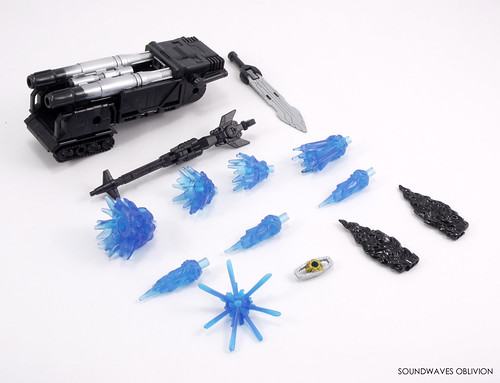 Rodimus Prime comes in a large but relatively flat windowless box with fantastic box art on the front and a CGI mock up on the reverse. What is pictured isn't quite what you get in the box as there are two translucent plastic smoke effects which are actually black and the vehicle mode canopy is much more translucent than the final product. 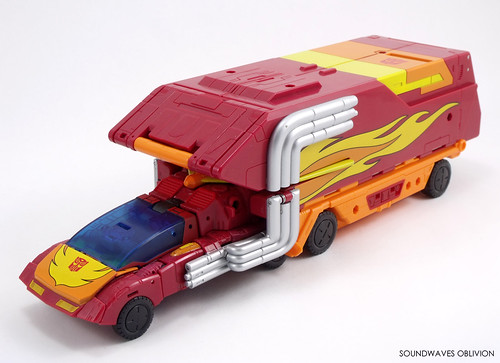 In the actual box are 7 translucent blue blast effects, 1 Matrix glow effect, 2 smoke effects, Mobile Cannon, Photon Eliminator Rifle, the Sword of Primus and the Matrix of Leadership (stored within Rodimus' chest). The trailer is opened up in the box and Rodimus Prime is in his vehicle mode. My trailer like many others would not fully close initially however keeping the cannon out of the trailer, I attached an elastic band around the front of the trailer and left it for a few hours. Now my trailer closes without any gaps as long as the cannon is kept out of it. 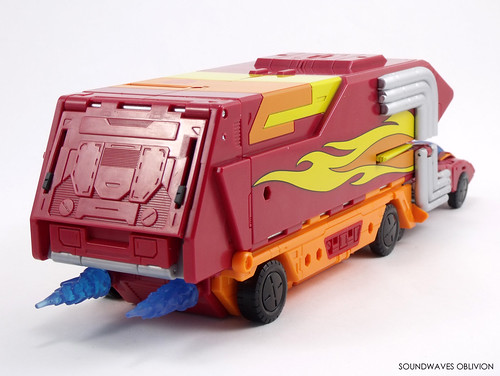 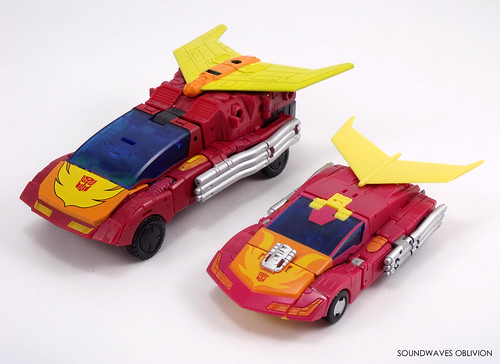 In the G1 cartoon, Rodimus Prime was very rarely seen without his trailer, much like Optimus Prime, however there was a scene in the Season 3 episode The Face of the Nijika where we see Rodimus' separate vehicle form for a split second. 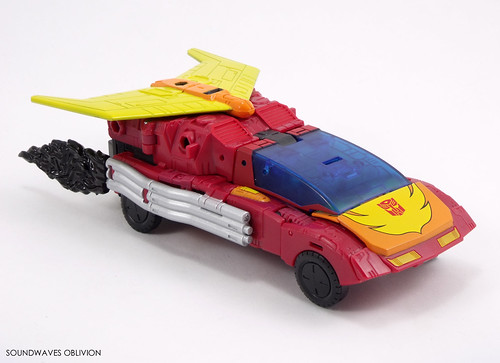 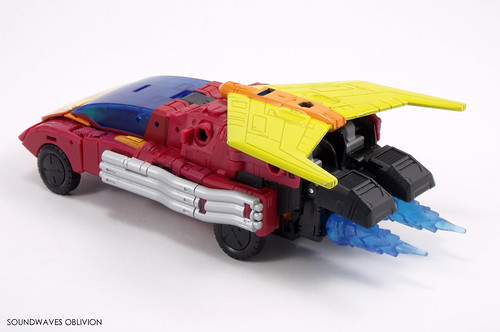 Attaching the car to the trailer can be tricky but I've found by having both trailer and car on a flat surface and rolling the car into the trailer makes it a lot easier. There is a black tab on a spring on the underside of the trailer which fits into a notch on the yellow spoiler, although it may seem like the car won't push all the way into the trailer, it will do with not a lot of force. I am concerned about the yellow paint rubbing off but the paint does seem rather thickly applied. 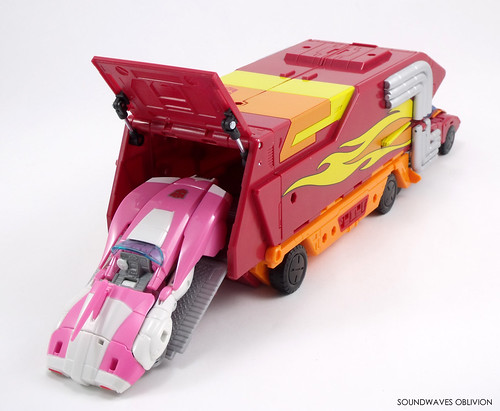 The combined car and trailer is huge and the car does seem to protrude from the trailer a lot more than the G1 animation model and the original G1 toy but the fact you have a full car makes it worth it, and in hand you hardly notice it. 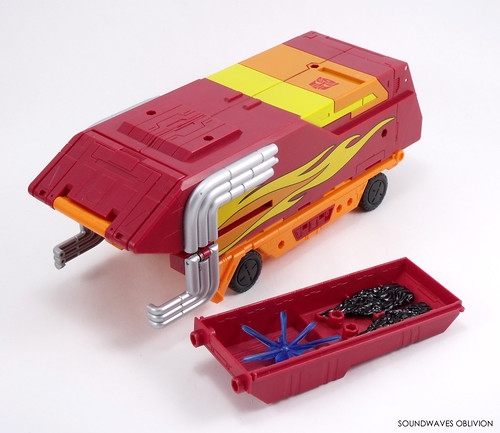 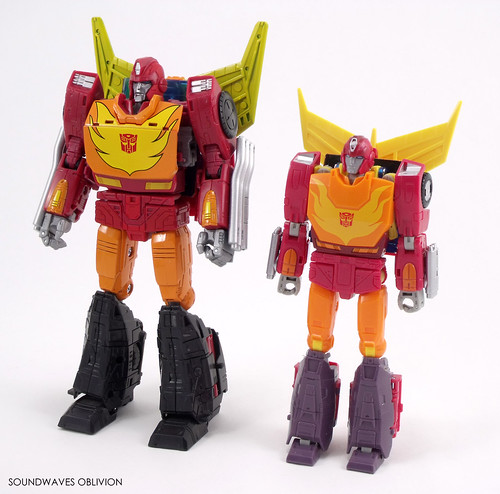 Transformation is very complex for a mainline Transformer and I was surprised by how involved it was. The transformation is completely different from the 2020 Studio Series Hot Rod but it does include the arm rotation transformation. Another nice touch with the transformation are the shoulder wheels which open out and clip into the shoulder to give it a seamless join. The pain in this transformation is clipping the chest into the translucent blue windscreen, this is a very tight fit and unpegging it is just as uncomfortable. I will be sanding the clips down slightly on my copy just to make this much easier in future. Both Kingdom Rodimus and Studio Series Hot Rod were designed by Yuya Onishi (who also designed MP-28 Hot Rodimus' vehicle mode). 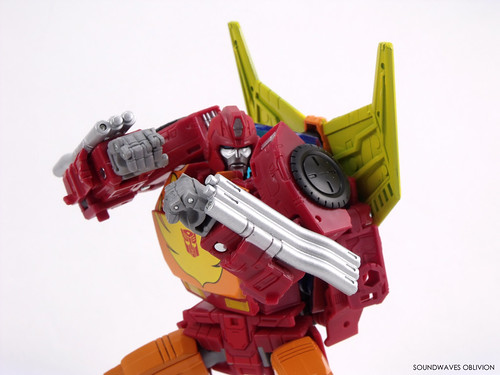 Rodimus Prime has a very impressive robot mode, it is a stylised version of the G1 animation model with a very serious and angular face and large articulated hands. The index fingers are separate from the rest of the fingers allowing Rodimus to point and replicate that scene from Transformers The Movie. 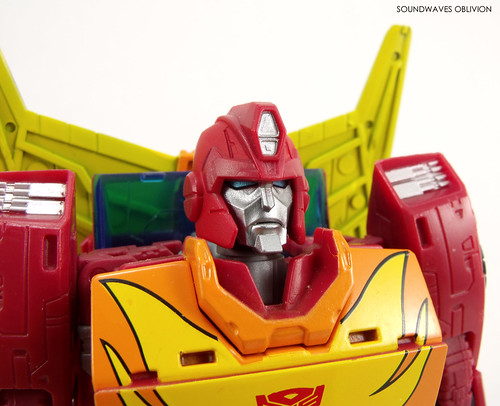 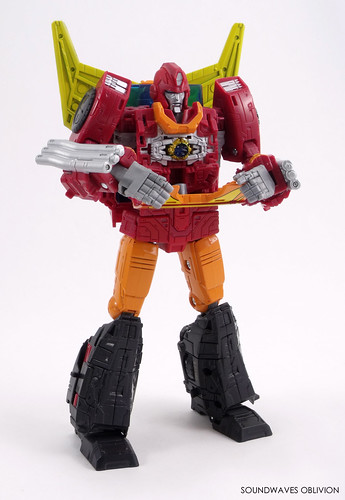 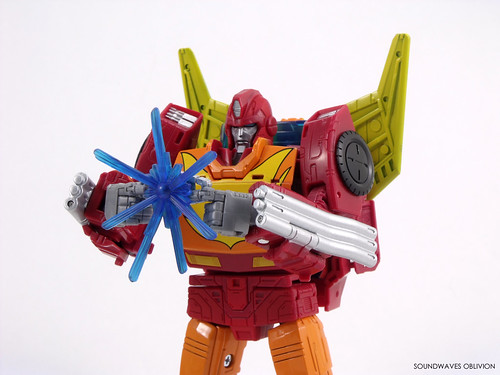 Rodimus has a great range of articulation allowing for some nice poses. The Photon Eliminator Rifle can be held in one or both hands and you can add the blast effects to the barrel although adding too many sections of the blast can make the rifle droop. Unfortunately the Rifle doesn't split in half to form two weapons like MP-9 or the Power of the Primes Rodimus, I think this was a missed opportunity. The weapon can store in a port on the side of the robot mode either in full gun mode or when folded. The sword stores on the back in a port on the yellow spoiler. 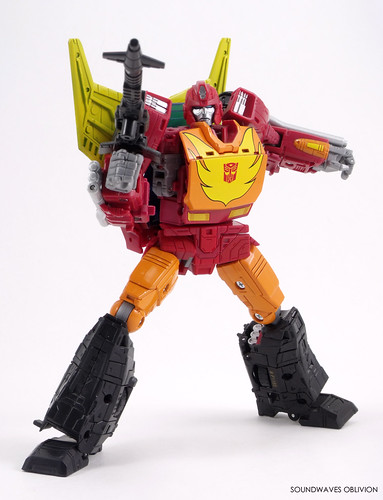 Exactly like the G1 Rodimus Prime the trailer opens out to form the combat deck and the cannon folds up. You can position Rodimus in the trailer and hold the handles of the cannon. The base of the cannon has a continuous track moulded in so you get the idea this can be moved independently from the trailer. This is a great feature, potentially inspired from the removable combat deck robot from MP-44 Convoy. The absence of the cannon allows you to make use of the space within trailer in vehicle mode. 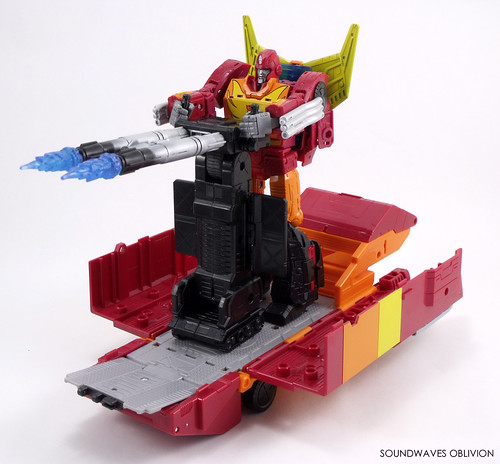 Overall this is a fantastic figure but really only worth picking up if you find one on offer.
Posted by Jeremy Barlow at 09:53

Email ThisBlogThis!Share to TwitterShare to FacebookShare to Pinterest
Labels: Kingdom