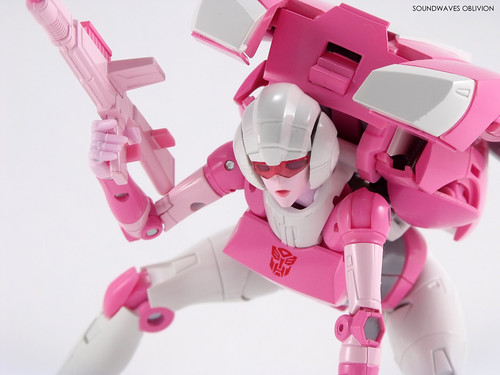 Profile (Translated from the Character Card)
MP-51 Cybertron Warrior Arcee
Function: Warrior
Motto: “Looks are always deceiving.”
Profile:
Intelligent and witty, Arcee is an affectionate, bright, gentle and beautiful female Cybertron. However, in battle her actions don't match her outward appearance; she is a brave and dependable warrior who shows no mercy. Arcee’s most important assignment is the protection of her human friend, the young boy Daniel.
STR...5; INT...7; SPD...7; END...7; RNK...6; CRG...9; FPR...5; SKL...7 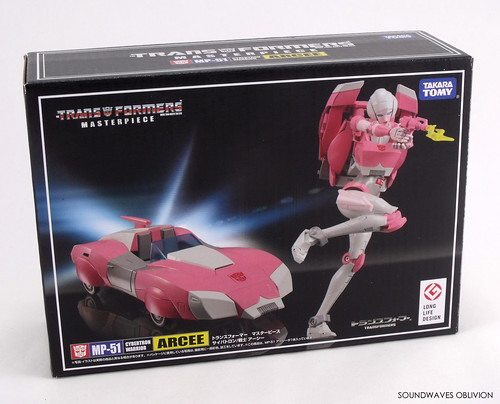 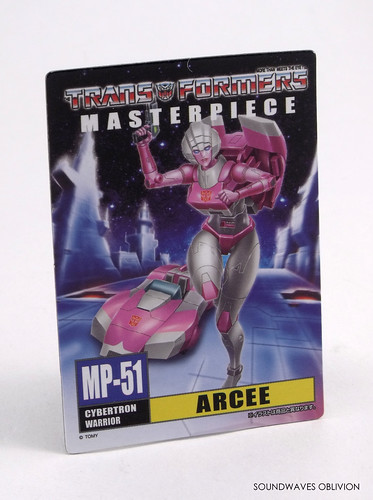 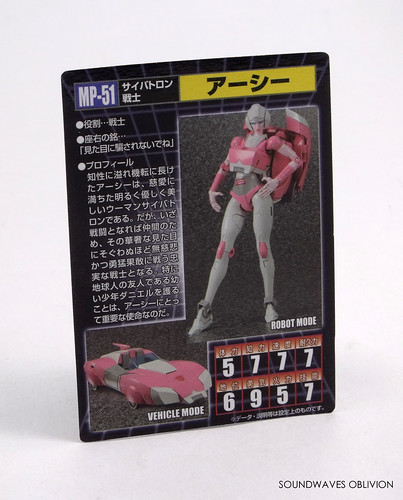 MP-51 Arcee was a surprise reveal alongside MP-50 Tigatron at the 2020 Winter Wonder Festival held in Japan at the Makuhari Messe International Exhibition on the 9th February 2020. Both figures were fully painted and appeared very close to the final retail version. Arcee would eventually be released in November 2020 retailing for 16,000 Yen (around $140 USD / £100).


Debuting in the animated 1986 Transformers The Movie, Arcee was initially designed by Floro Dery who took inspiration from Star Wars' Princess Leia. The vehicle mode was an open top futuristic sports car with a design very similar to Blurr's vehicle mode. A non transformable  prototype was designed (pictured above right) based heavily on the initial concept art but it was never taken any further and Arcee would not see a toy release.

In Season 4 of the cartoon, Arcee became a Headmaster with her human friend Daniel Witwicky. A Headmaster version of Arcee was also planned early on in 1987 which was a repaint of Chromedome but once again this toy was never released.
Transformers Masterpiece toy designer Hironori Kobayashi is a fan of the 1986 movie and in preparation for a job interview with Takara (the interviewer was Hideaki Yoke), he scratch-built a transformable toy of Arcee based on her 1986 appearance. This not only secured him a job at Takara but he also modified his model and entered it in a custom Transformer competition at Botcon Japan on the 13th December 1998 and won.

Hironori Kobayashi's Arcee took him 5 days to make and was made out of plastic sheeting, resin and epoxy putty. The robot mode stood 12.2 cm and the car mode was 9.5 cm in length.

Arcee would see her first mainline toy release in 2004 under Transformers: Energon however it was in 2014 under Transformers Generations that an Arcee based on her 1986 movie appearance would be released. Hironori Kobayashi put himself forward to design Arcee and persuaded Hasbro to base Arcee on the animated movie model. If you are familiar with the 2014 Arcee you can see from the transformation sequence above that Kobayashi based the design on his 1998 scratch-built custom with added improvements. 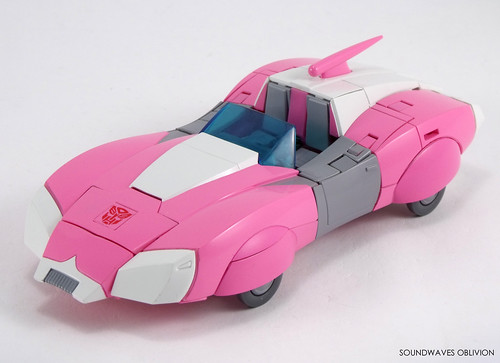 Six years later MP-51 Arcee would be released in 2020 and as you would expect from the Masterpiece series, Arcee is very close to the 1986 animation model design. The transformation is also very close to Hironori Kobayashi's original, albeit MP-51 is a bit more than an up-scaled version of the 2014 Generations "Thrilling 30" version. 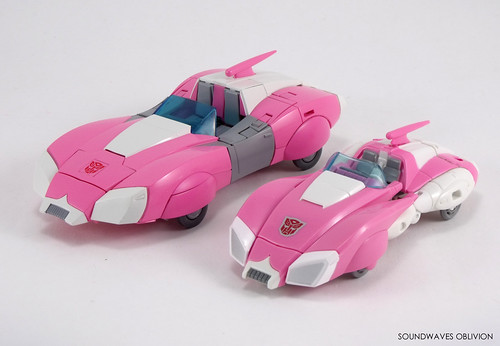 Arcee is packaged in her sports car mode which recreates the cartoon design complete with the grey door sections. Although the small Daniel Witwicky figure that came with MP-22 Ultra Magnus cannot be seated in Arcee's car mode (unless you remove the legs) the dashboard is still very detailed. 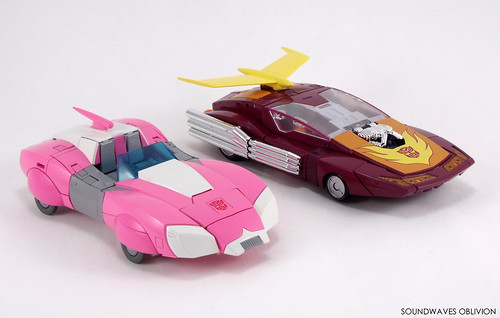 The weapons can store in vehicle mode with the smaller handgun hiding away on the underside of the car by either of the front wheels. The rifle and larger pink handgun can attach to the side of the vehicle mode. The "Crusher" weapon attaches in front of the front right hand side wheel replicating the scene from the 1986 Movie where Arcee uses it against the attacking Junkions. 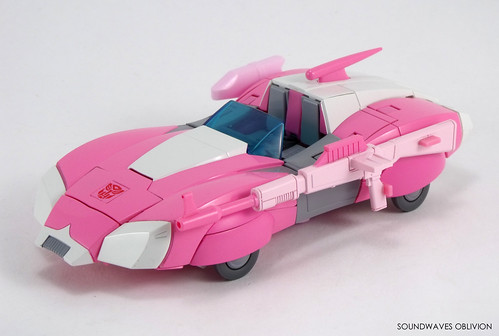 Transformation into robot mode is comparable to the 2014 Generations version however due to the larger size there are many more differences. I found the windscreen to a tricky step in the transformation. I did have trouble with the backpack section at first as it seemed higher than it should have been but there is a flat section that plugs into the underside of the neck / collar and I did not have that pushed all the way in. 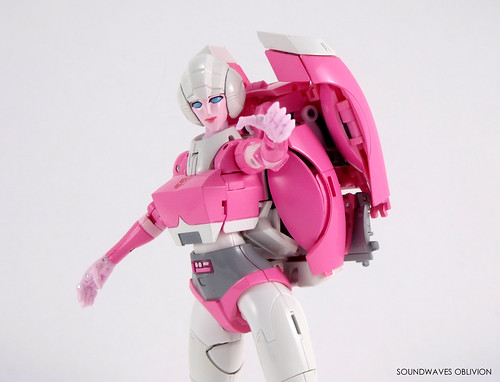 Whereas the vehicle mode is cartoon accurate, the designers have taken a few liberties with the robot mode design. It was mentioned in a Figure King article (issue #202, November 2014) about LG-10 Arcee (Generations Arcee) that they intentionally changed the blocky design of the waist in the cartoon for a more streamlined body look. The designers also carried this over with the MP-51 design which has made the chest appear lower. This design has garnered some criticism and a few fans have created alternative chests which make it more animation accurate. 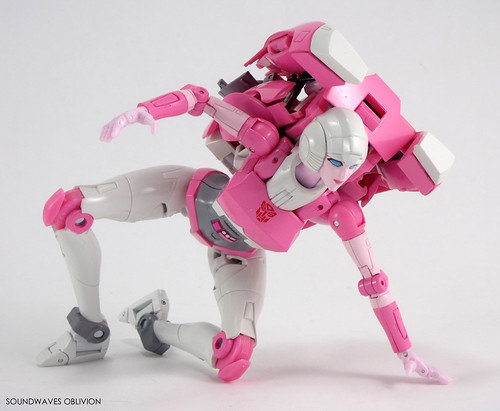 Overall Arcee is incredibly articulated and although being top heavy with relatively small feet, she can stand just fine although sometimes it can take some time to get the feet positions just right. 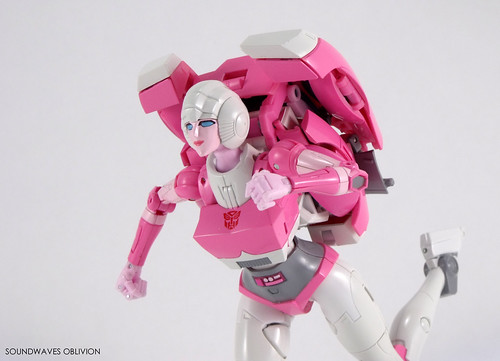 Arcee comes with three guns, they don't have specific names. The small gun is first seen in the 1986 movie when Arcee blasts the claws inside Unicron as they are attacking Daniel. The pink gun comes with a holster which attaches to Arcee's thigh and the long rifle can attach to Arcee's backpack when not in use. Each of the three guns comes with their own yellow blast effect. 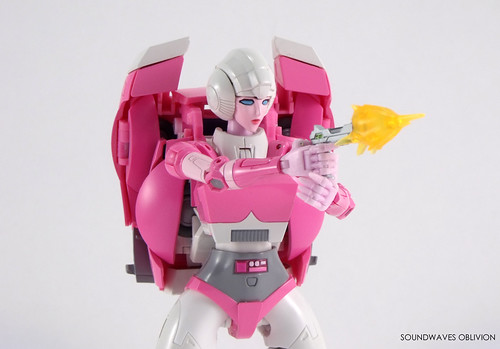 Arcee comes with three other faces. To swap them you need to lift the top of the head and slide the old face out. There are also 2 runners, when you want to use the red visor, the face needs to slide down the furthest runner from the front of the face to allow clearance for the visor. 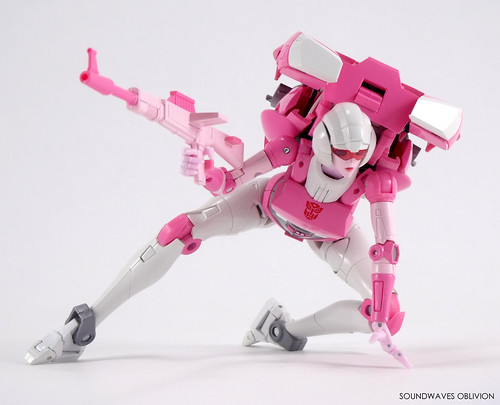 Overall Arcee is one of the best Masterpiece Autobot cars, you can overlook the backpack and low chest with everything else the figure offers. 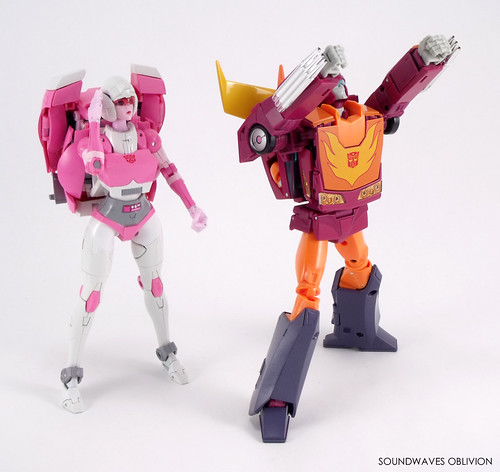 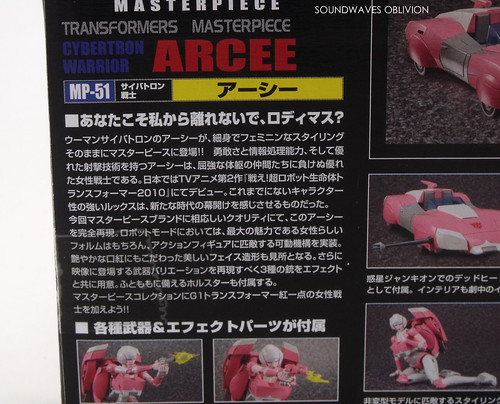 ■ Rodimus, you aren’t leaving me here? (Translated from the back of the box)
Arcee the female Cybertron has been released in the Masterpiece series complete with her delicate feminine styling. Arcee is an excellent female warrior, possessing courage, intelligence and is a skilled sharpshooter which makes her just as capable as her much stronger compatriots. Arcee debuted in Japan in the second animated series “Fight! Super Robot Lifeform Transformer 2010”. This new strong character, the likes of which have never been seen before, made the series feel like the dawn of a new era. Arcee has been faithfully created for the Masterpiece brand with superb quality. Her most attractive feature is her feminine robot form as well as her impressive articulation making her comparable to an action figure. Another highlight is her beautiful face sculpt complete with glossy lipstick. She comes with 3 different types of weapon complete with blast effects as seen in the animation. She also has a holster that can attach to her thigh. Add this female warrior to your G1 Transformer Masterpiece collection!! 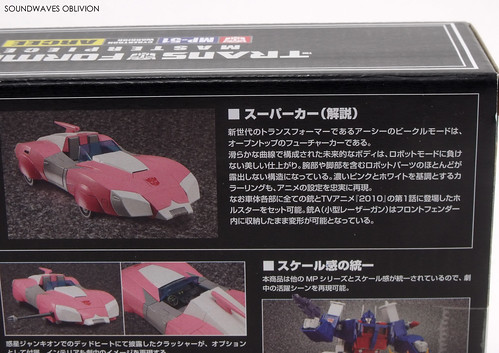 ■ Supercar (Description) (Translated from the back of the box)
As a new generation of Transformer, Arcee’s vehicle mode is an open topped futuristic car. The futuristic bodywork is made up of smooth curves and has a beautiful finish comparable to the robot mode. Most of the robot parts such as the arms and legs are hidden away. The dark pink and white colours are faithfully reproduced from the animation. All the included weapons and the holster as seen in the first episode of “2010” can be stored on the car's body. Gun A (the small laser gun) can be stored within the car’s front wing (fender). 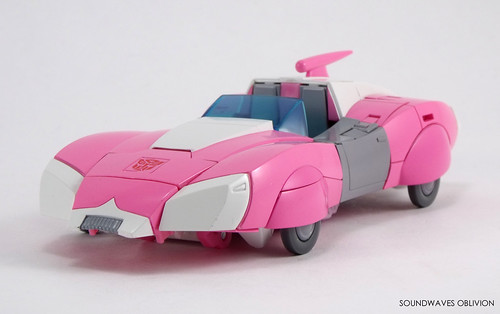 Vehicle Mode: Supercar (Translated from the instruction pamphlet)
Unlike the other Cybertrons who crash landed on ancient Earth and were revived in the 1980’s, Arcee’s vehicle mode is a supercar from her homeworld. It is a left hand drive two seater open top and its dashboard is lined with various monitors. Much of the robot mode is internal save for the pink colour scheme and front section of the car. The retro-futuristic design is curvaceous, smooth with excellent aerodynamics and is very fitting for Acee’s feminine form.
Her vehicle mode was first seen when the Destrons attacked on Planet Junkion in the second half of “The Movie”. Her supercar mode has excellent manoeuvrability and acceleration as seen in the first episode of “Transformers 2010” where she catches up with her sweetheart Sprung as they chase after a mysterious assailant. 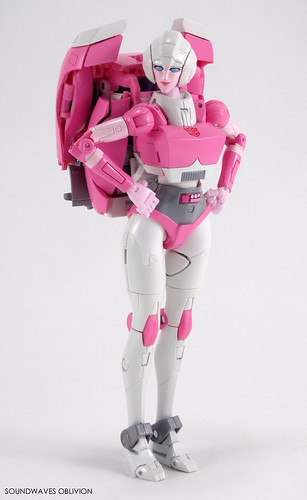 Robot Mode: Arcee (Translated from the instruction pamphlet)
Function: Warrior Motto: “Looks are always deceiving.”
Profile:
The female Cybertron Arcee, originally appeared in the animated movie “Transformers The Movie” which depicted the Unicron War but for the Japanese audience she appeared as a new member of the Cybertrons in the cartoon “Fight! Super Robot lifeform Transformers 2010”. Arcee quickly became an indispensable member of the Cybertrons. Despite being overtly feminine showing compassion and kindness, she also has a strong-willed and open-minded character. As well as her intellect she is also a skilled marksman and is extremely reliable in battle. She also used Galvatron's Sci-Fi gun on a Trans-Organic who was turning her friends into vampires one after another. In the “2010” series she built up her relationship with Sprung in private and is visibly upset at times when Sprung is badly wounded.
In the domestic sequel “The Headmasters”, she was still part of the main cast although she did not take part on the battlefield as much as the previous season. In the overseas sequel, “The Rebirth”, Arcee chooses her human friend Daniel, who she sees as a son, to be her Headmaster partner. The diversity by being a warrior, female and a mother is what makes Arcee so appealing. 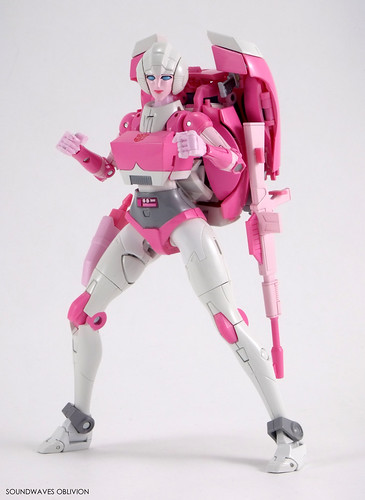 Weapon: Gun (Translated from the instruction pamphlet)
Arcee is a skilled sharpshooter and has three guns at her disposal, each of which comes with blast effects. Gun A: The weapon that is most used by Arcee. Gun B: A handgun which can be stored in the holster. Gun C: A rifle used by Arcee when the shot matters. 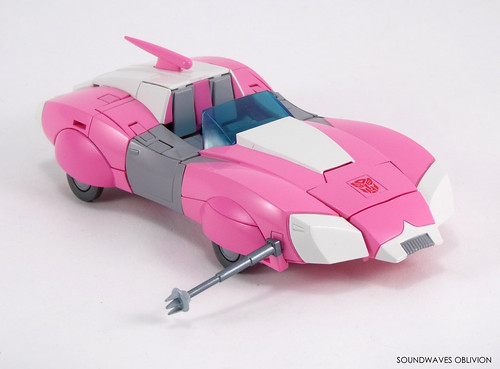 Weapon: Crusher (Translated from the instruction pamphlet)
Arcee is equipped with a crusher on the front side of her vehicle mode. It was used in the second half of “The Movie” against a Junkion who was riding a fellow Junkion in their vehicle mode. 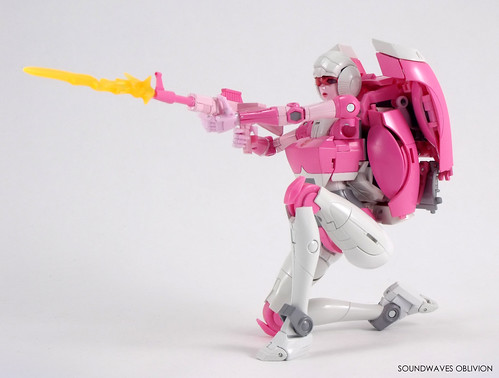