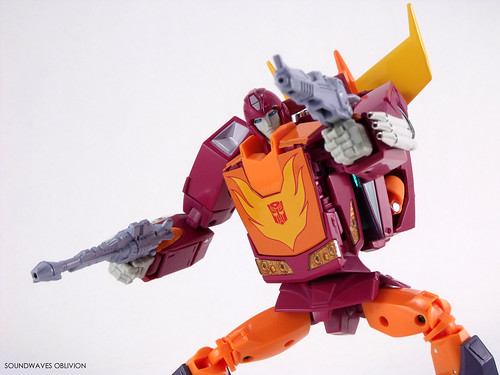 Profile (Translated from the Trading Card)
MP-28 Cybertron Cavalier Hot Rodimus
Function: Cavalier
Motto: “My actions speak louder than words.”
Profile:
Hot Rodimus is a young Cybertron warrior who dreams of becoming a hero. His youthful impulsive behaviour can be a disadvantage, however he is brave and conscientious and worthy of his Cavalier title. Excels at shooting with his two Photon Lasers and exhaust pipes, however he prefers fishing with friends rather than combat.
STR...10; INT...10; SPD...9; END...10; RNK...10; CRG...7; FBL...10; SKL...10 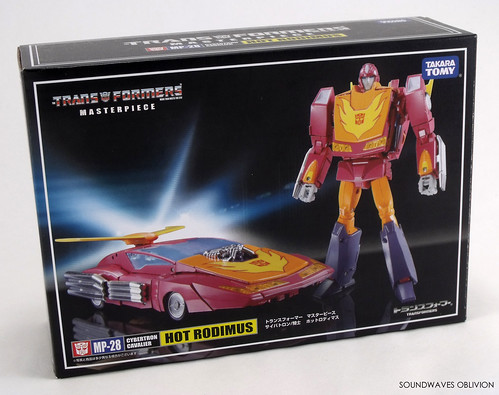 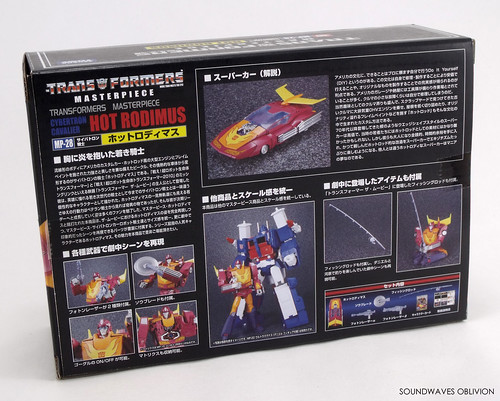 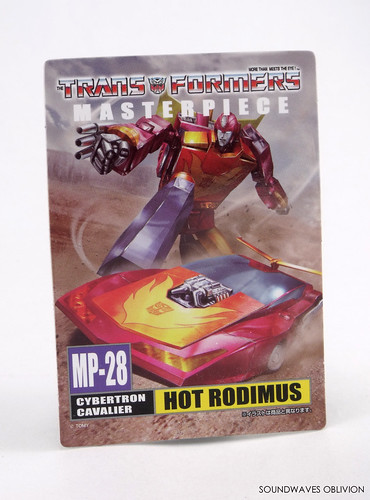 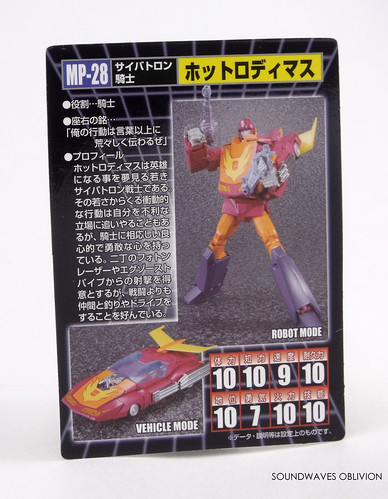 With the "soft reboot" of the Masterpiece line, it was inevitable that Hot Rodimus (aka Hot Rod) would make an appearance sooner or later. The initial MP-9 Rodimus Convoy released in 2011 was a figure that tried to do too much and ended up with an overly complex transformation making MP-5 Megatron look simple in comparison. 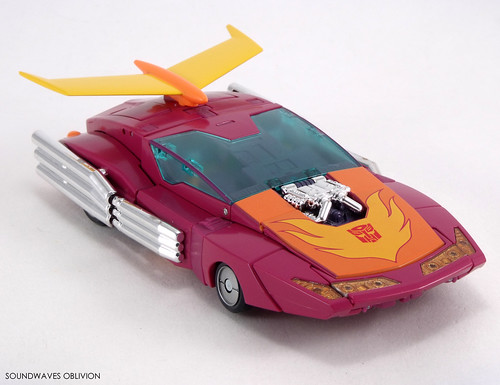 The premise was good - one figure which could turn into both Hot Rodimus and Rodimus Convoy along with both alternate modes, however the execution left a lot to be desired. I do like the MP-9 figure but it is plagued with quality control issues a figure that expensive should not have. 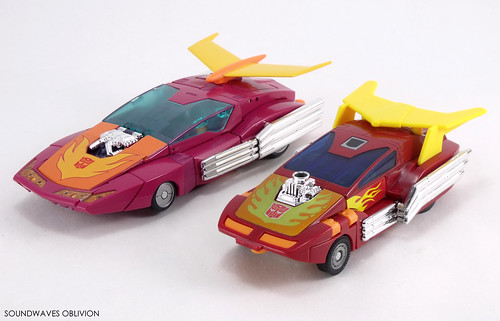 MP-28 Hot Rodimus in my opinion was a welcome addition which keeps things simple, it remains simply as Hot Rodimus retaining scale with the likes of MP-10 Convoy, Lambor and the other Autobot cars. However this figure is not without a few issues, although I may be nitpicking. Vehicle mode looks like it came out of the animated movie; the MP-9 version was good, maybe a bit more stylised but MP-28 pulls it off better. I would of prepared a comparison between the 2 but I'm not transforming MP-9 anytime soon. There are a few clearance issues on the undercarriage of the car which prevent it rolling fully - although I may not have the transformation as fitted as I could have done. 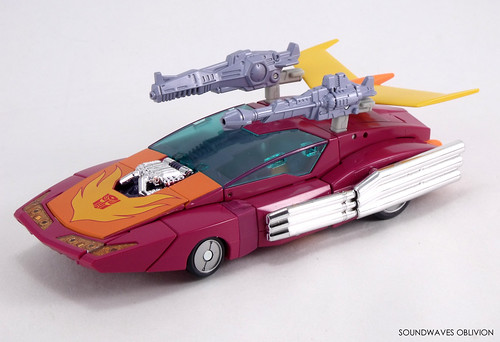 The weapons can plug in the roof of the vehicle mode (mine certainly struggled to fit) and the chromed engine section lifts up (very stiffly) to fit a weapon in as well much like the original G1 toy. 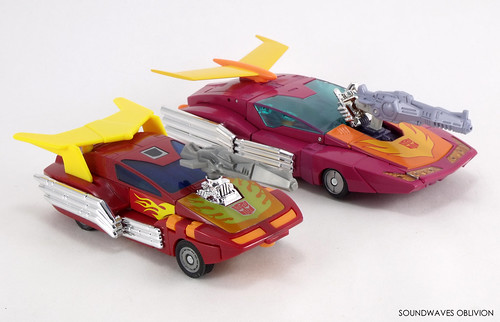 Transformation to robot mode is a much better experience than MP-9, as well as being quicker and less fragile to handle. Robot mode is slightly taller than the standard Masterpiece Autobot cars and certainly looks like Hot Rodimus. At certain angles the proportions are slightly off, the arms are too long, the torso is wide and boxy, the legs are narrow and the head is small. The chest also opens up to fit MP-10 / MP-44 Convoy's Matrix which is a nice touch. Vehicle mode is pretty much perfect but Takara Tomy didn't quite nail the robot mode. 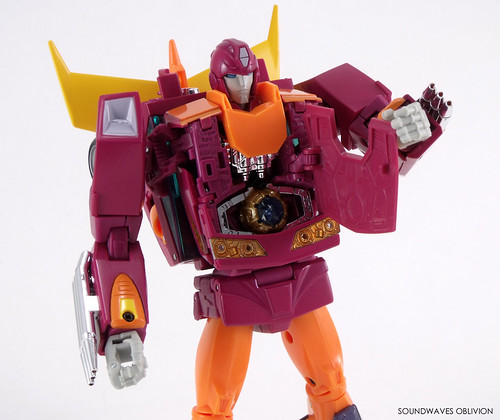 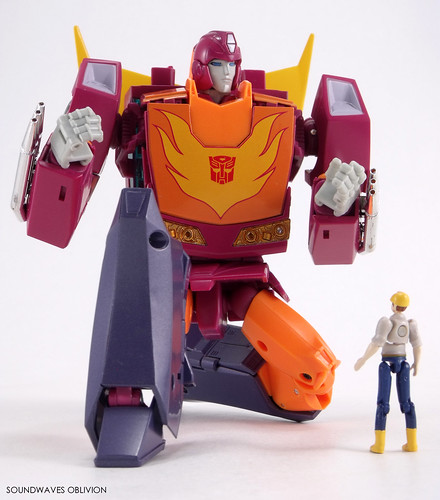 This is however the best Hot Rodimus that has been released so far. Accessory wise he comes with the two weapons the 1986 version came with, and the saw blade and fishing rod as seen in the 1986 animated movie. It is a shame Takara Tomy didn't release the Targetmaster partner as well but at least we have a fishing rod... (Addendum: The Targetmaster was released with MP-40 in 2018) 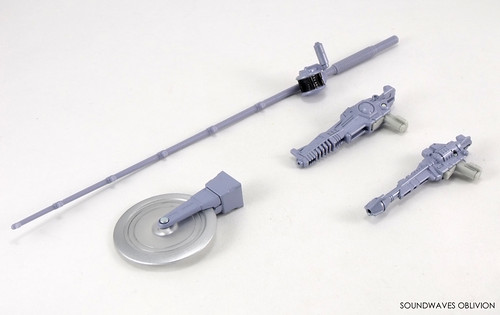 Overall this is a decent figure and well worth picking up despite a few minor issues. It isn't the best Masterpiece Cybertron car. At first I found it rather underwhelming but in time it has grown on me and I would certainly recommend it. 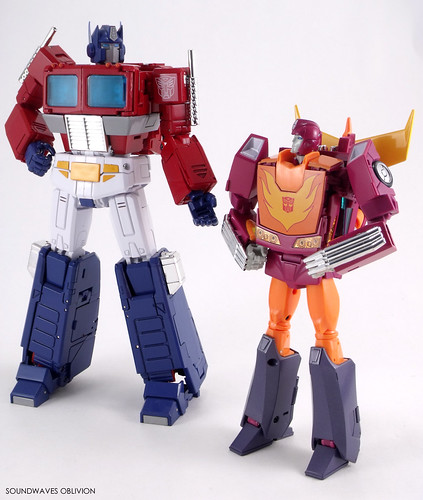 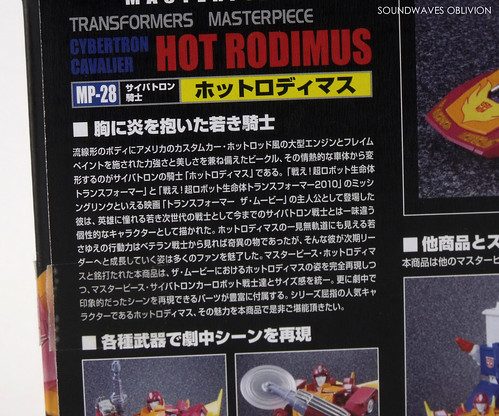 ■ A flame adorns this young Cavalier's chest. (Translated from the back of the box)
The Cybertron Cavalier “Hot Rodimus” transforms into a vehicle mode which combines the power and beauty of a streamlined body with a large custom American Hot Rod engine and a flame paint scheme. He was the main character in “Transformers The Movie” and is the character who ties “Fight! Super Robot Lifeform Transformers'' and “Fight! Super Robot Lifeform Transformers 2010” together. As a next generation hero he was intentionally designed to be different from the previous Cybertron warriors. Hot Rodimus’ unorthodox actions confused veteran warriors and his journey to leadership appealed to many fans. This Masterpiece Hot Rodimus perfectly reproduces his appearance in the Movie and scales well with the other Masterpiece Cybertron Car Robots. He also comes with a wealth of accessories allowing you to replicate scenes from the Movie. We hope you enjoy the charm of Hot Rodimus, one of the most popular characters in the series. 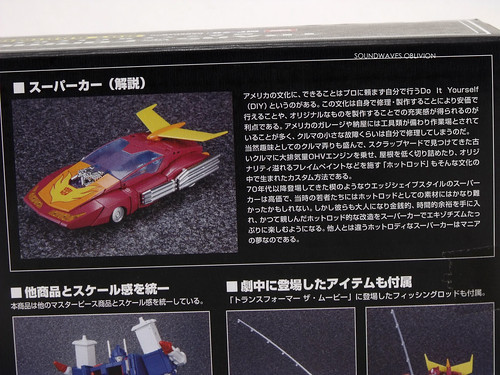 ■ Supercar (Commentary) (Translated from the back of the box)
There is a lot of “Do it Yourself” (DIY) in American culture rather than a dependence on professionals. The advantage of this is it's much cheaper to do it yourself and it gives you a sense of fulfilment. American garages and barns are filled with tools and equipment and are used as workshops to repair broken down cars. Tinkering and modifying cars is a popular hobby and the creation of “hot rods'' was born in this culture. Large OHV engines were fitted on old cars found on the scrap heap, roofs were lowered and flames were painted over the car body. Supercars imitating a wedge shape appeared during the 70’s and were too overpriced for young people to buy as “hot rod” material. However, as they grew up they had more disposable income and free time and could enjoy modifying exotic supercars into hot rods. An original hot rod supercar is the dream of all enthusiasts. 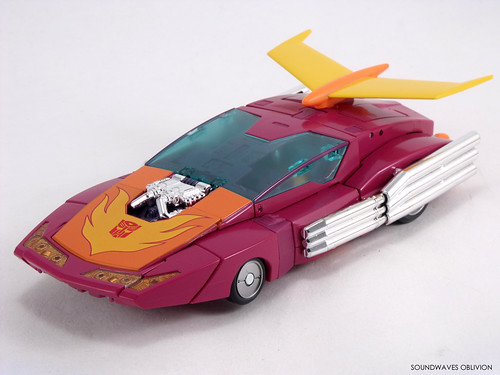 Vehicle Mode: Supercar (Translated from the instruction pamphlet)
Hot Rodimus’ vehicle mode is reminiscent of an American custom hot rod car, with a large exposed engine in the hood and painted flames on the body of the car. It has a futuristic feel to it which is common with the Cybertron warriors of the 2010 era. The beautiful and energetic vehicle mode is suitable for the young Hot Rodimus. Maximum speed of 193 km/h, when in motion he can emit shockwaves which can temporarily electromagnetise Destron microcircuitry. He can also drive underwater. Hot Rodimus has a close relationship with Daniel, the son of the first human the Cybertrons befriended. He enjoys taking Daniel out for carefree drives, rather than driving into battle. Because of his impulsive personality, he drives recklessly in vehicle mode, much to the annoyance of veteran warrior Chear. When Cybertron City was under a large scale attack from the Destrons, Hot Rodimus was among the first to respond, colliding with the Insectrons head-on as they were eating their way into Cybertron City. 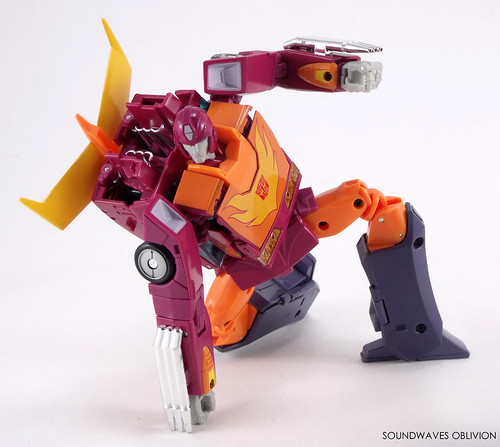 Robot Mode: Hot Rodimus (Translated from the instruction pamphlet)
Function: Cavalier
Motto: “My actions speak louder than words.”
Profile:
Cybertron Cavalier Hot Rodimus is a youth who dreams of one day becoming a hero. Due to his youth he has a tendency to act impulsively, something which veteran warriors struggle to understand so they end up judging him unfairly. His ability to take action is integral to the new generation of warriors and is a merit for Hot Rodimus. Although hot tempered he has noble intentions and is worthy of his Cavalier title. He courageously confronts any adversity to defend his comrades. During the Unicron War he showed remarkable achievement taking the Matrix of Leadership and being reborn, succeeding Convoy as the new Supreme Commander. This was surprising to many who knew the impulsive Hot Rodimus, however he has demonstrated his skill as a leader protecting his friends and entering a friendship with Junkions and other tribes. After becoming Supreme Commander he was greatly affected by the demands of leadership. Although he had matured over time, he eventually returned the Matrix back to the resurrected Convoy and was able to live on in his former state as Hot Rodimus. The tale of a youth's twists and turns is an appealing part of Hot Rodimus’ character. 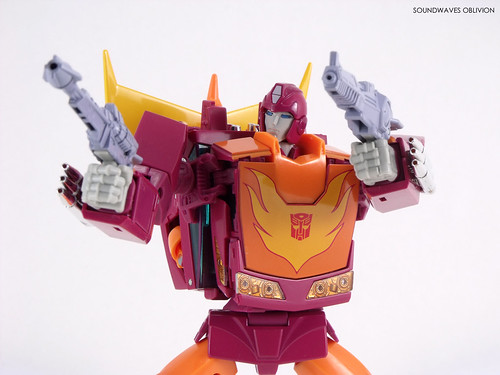 Weapon: Photon Laser (Translated from the instruction pamphlet)
Two pistols equipped with Hot Rodimus. These weapons have a range of 6440m and are effective tools with their accuracy and power alongside his shooting skill. In the 28th episode of “Fight! Super Robot Lifeform Transformers 2010”, “The Too Heavy Burden” he stunned Scourge with a powerful blast and reclaimed the Matrix. 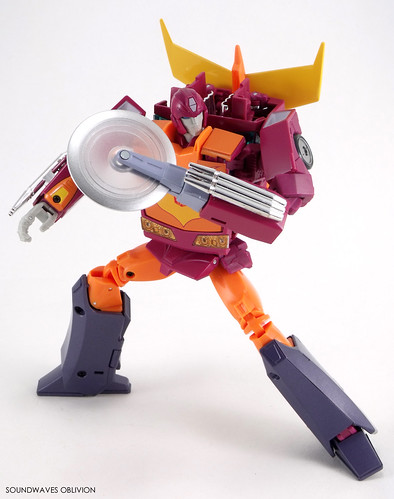 Weapon: Saw Blade (Translated from the instruction pamphlet)
A rotating saw built into Hot Rodimus’ arms. Armed for a variety of purposes from combat to the removal of obstacles. When attacked by a huge squid robot when lost on Planet Quintessa in “Transformers The Movie”, Hot Rodimus successfully repelled the creature using his saw blade. 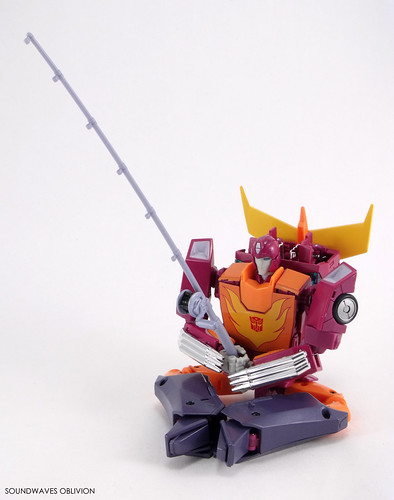 Accessories: Fishing Rod (Translated from the instruction pamphlet)
Hot Rodimus’ favourite fishing rod that he uses for his favourite hobby. Like other Cybertron warriors, Hot Rodimus loves Earth's culture and especially loves the fun of fishing. His first appearance in “Transformers The Movie” shows him enjoying fishing with Daniel. Confident with his fishing skills and was even shown catching a big fish. 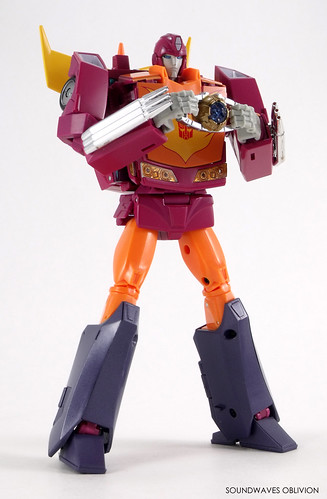 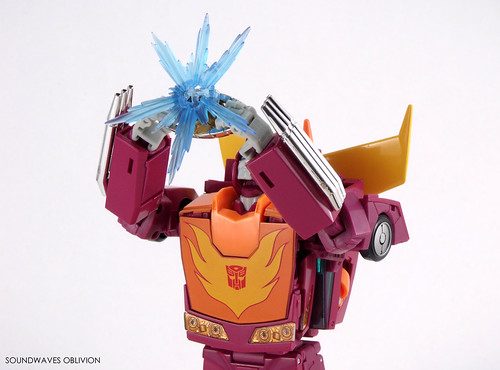