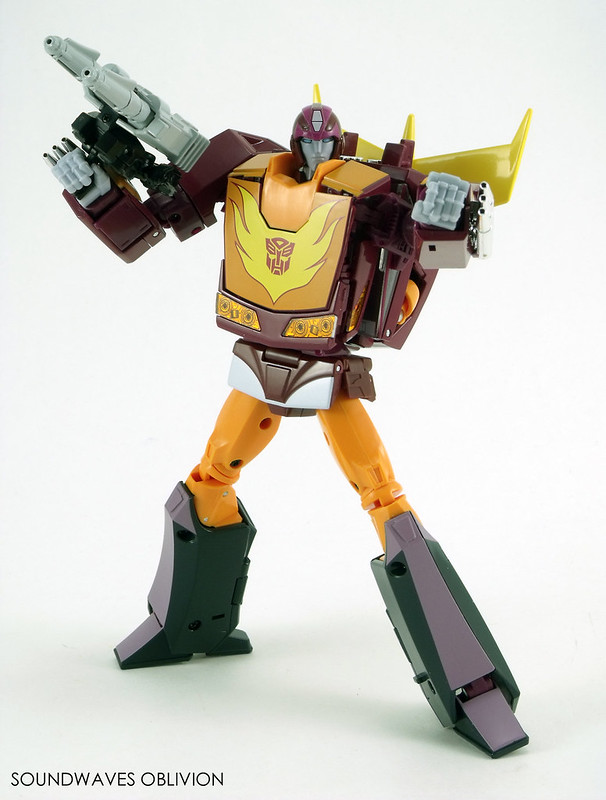 Profile (Translated from the Trading Card)
MP-40 Cybertron Cavalier / Targetmaster Hot Rodimus
Function: Cavalier
Motto: “My actions speak louder than words.”
Profile:
Hot Rodimus is a young Cybertron warrior who dreams of becoming a hero. Because of his youth his impulsive behaviour can be a disadvantage, however he is brave and conscientious, worthy of his Cavalier title. Working with his partner Firebolt who transforms into an Electrostatic Discharge Rifle, he can temporarily electromagnetise Destrons micro-circuitry.
STR:10; INT:10; SPD:9; END:10; RNK:10; CRG:7; FBL:10; SKL:10 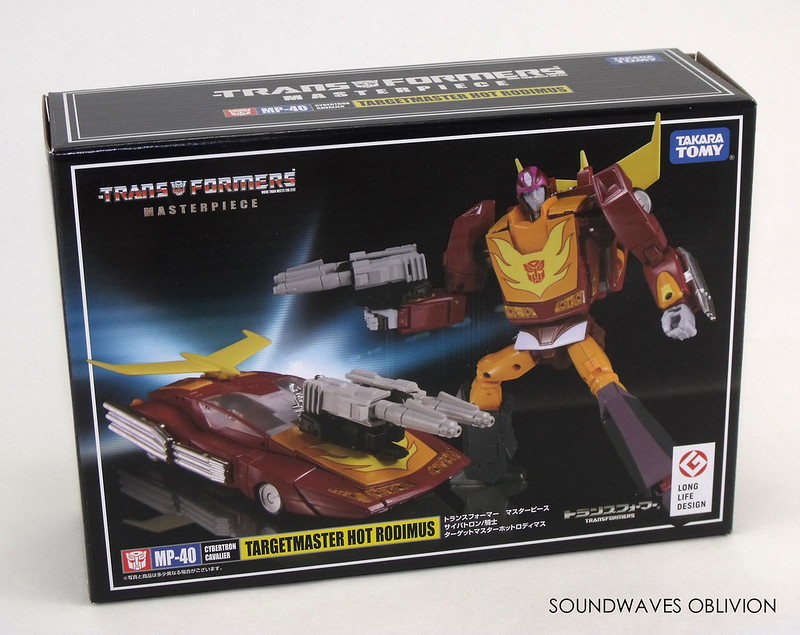 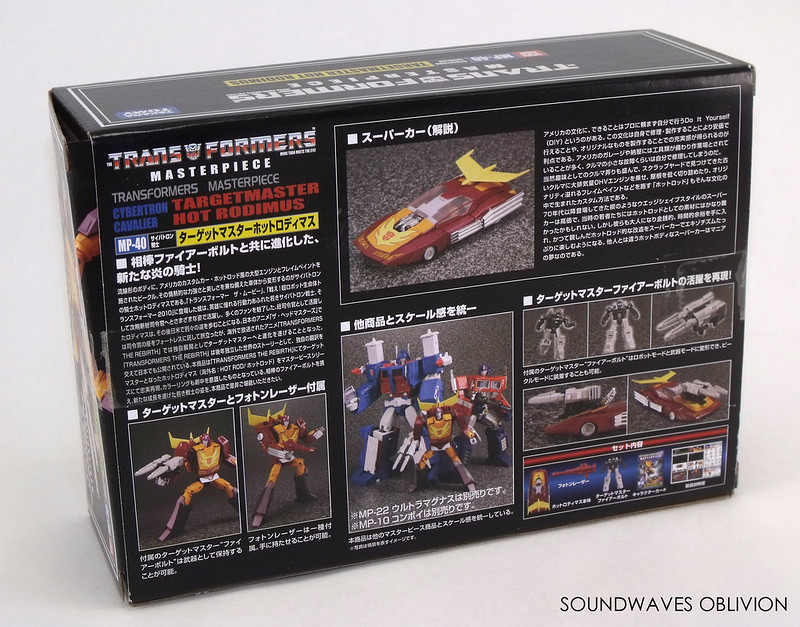 MP-40 Targetmaster Hot Rodimus was released in February 2018 and is a direct repaint of MP-28 Hot Rodimus which was released 2 years prior in February 2016. To differentiate from the original, MP-40 is based on Hot Rods appearance in the three Season 4 episodes "Transformers The Rebirth" where Hot Rod featured a slightly different colour scheme. Season 4 never aired in Japan and was replaced by The Headmasters cartoon series, however The Rebirth was released to home media in Japan in 1996 and was dubbed in Japanese. Only a few of the characters maintained their Japanese names, Convoy and Hot Rodimus being amongst them, the rest of the characters went by their western names. 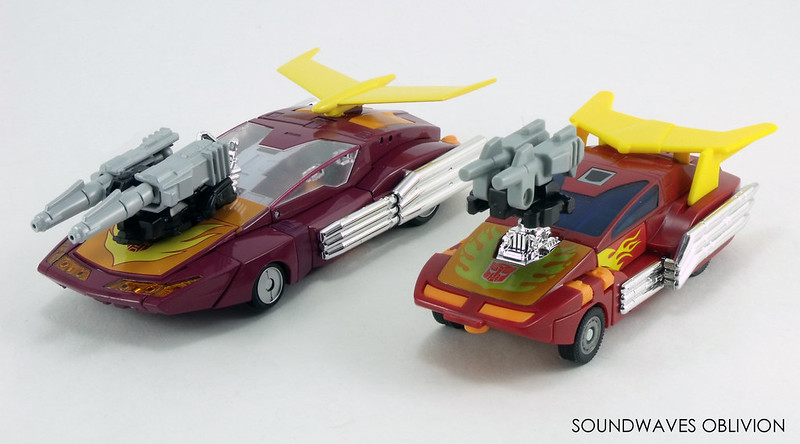 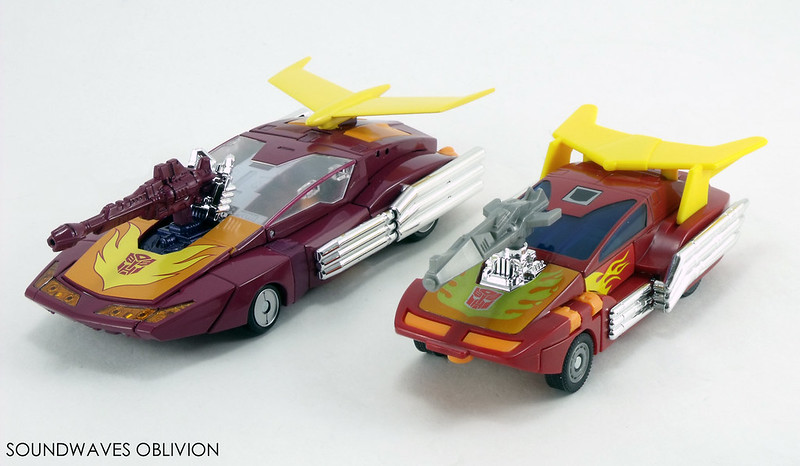 The entirety of Transformers The Rebirth was animated by the South Korean animation company AKOM which was founded by Nelson Shin, the director of the 1986 Transformers The Movie. Unfortunately the Transformers episodes produced by AKOM feature sub-par animation, errors and the use of older animation models which explains why Hot Rod is coloured differently in this series. 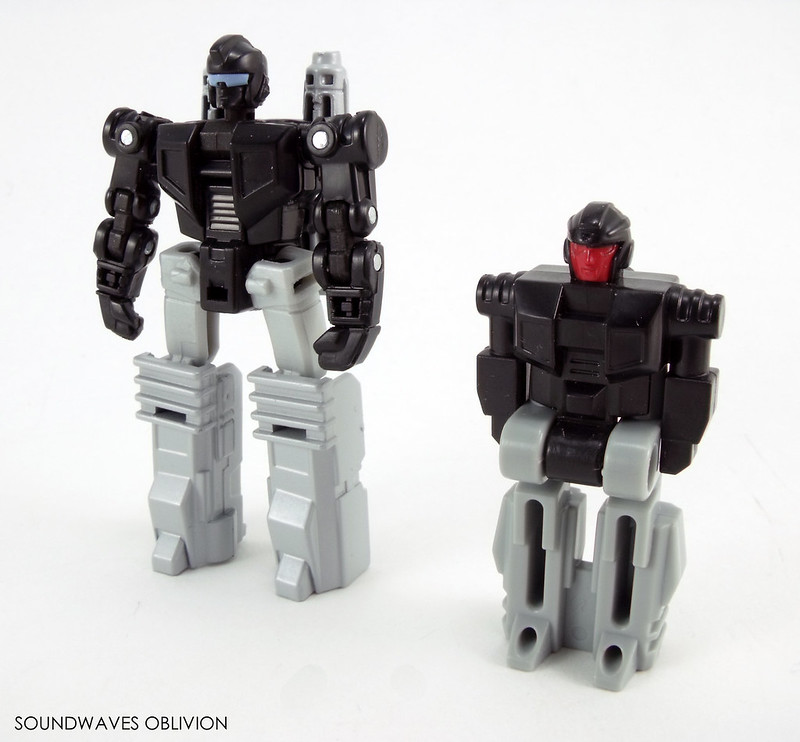 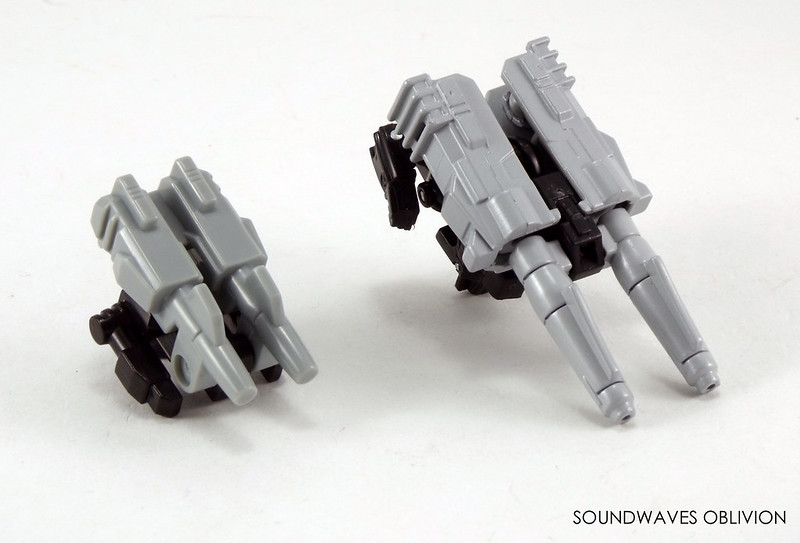 MP-40 features a deep red body colour, a larger Cybertron / Autobot symbol on the bonnet, a grey painted section beneath the now clear windscreen and the lower section of his waist is painted white. The front of Hot Rodimus' legs are painted in a pale lavendar colour because AKOM used colours for what should have been shading. 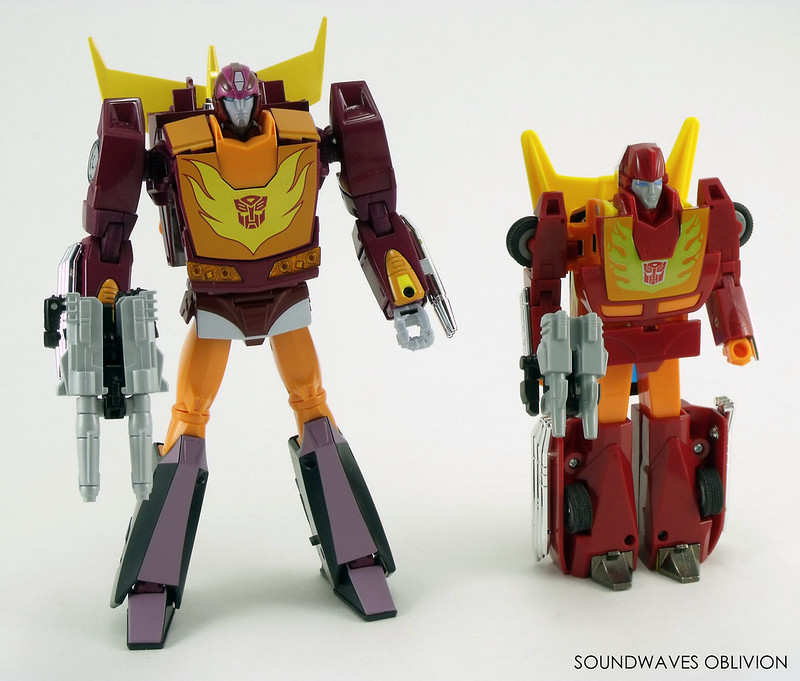 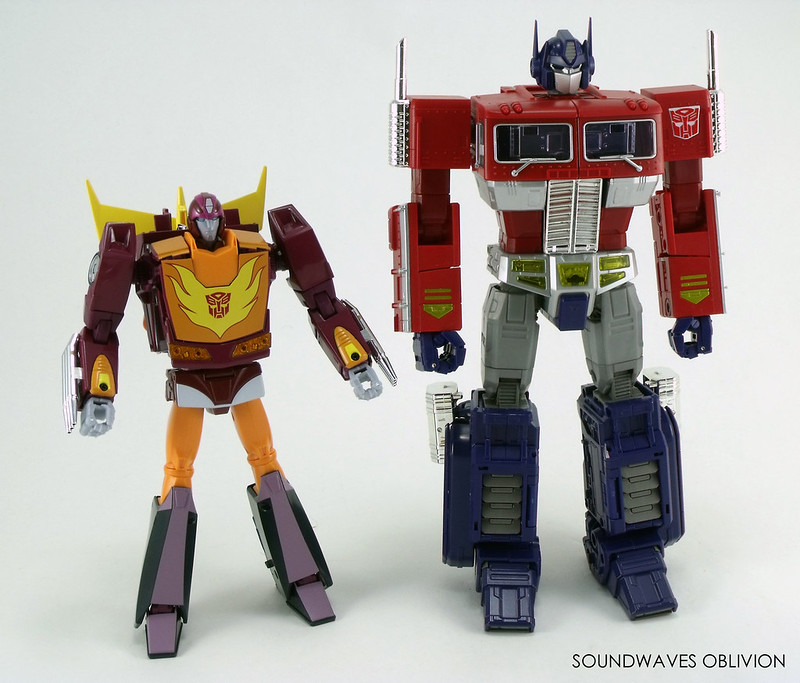 Although Firebolt is a cartoon accurate repaint of Offshoot, Firebolt features remoulding so it can fit in Hot Rodimus' hands and engine block. For some reason, Firebolt has a longer neck then Offshoot and the shoulders have been misassembled so in gun mode the robot arms don't sit flush alongside the body. It still transforms but it's just a shame for a premium figure. 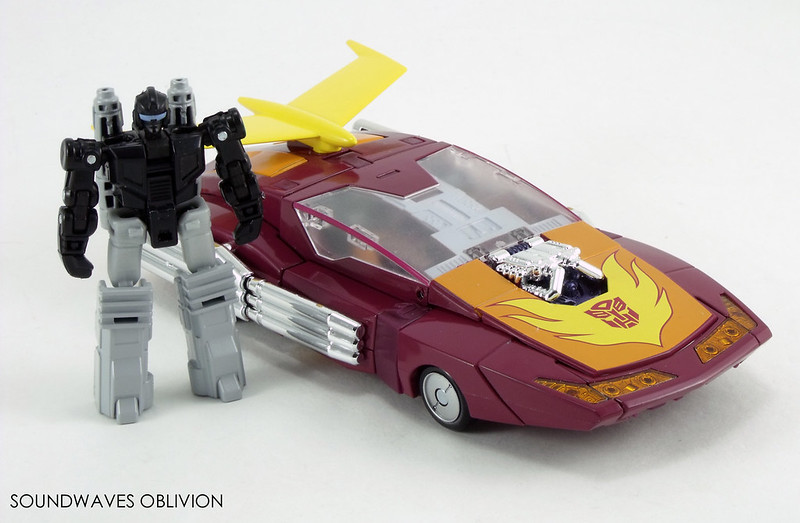 I found the original MP-28 figure underwhelming and I did not anticipate that I would like MP-40 as I'm not a fan of the The Rebirth colour scheme, however in hand, I like this figure a lot better than MP-28. It has a quality feel to it that MP-28 was lacking and I would certainly recommend it over MP-28; my MP-28 came with a few stress marks out of the box and the plastic feels weak and there are certainly none of these issues with MP-40. The only negative on my copy is that the right arm is quite loose at the shoulder so posing with the heavier Targetmaster weapon can be difficult. 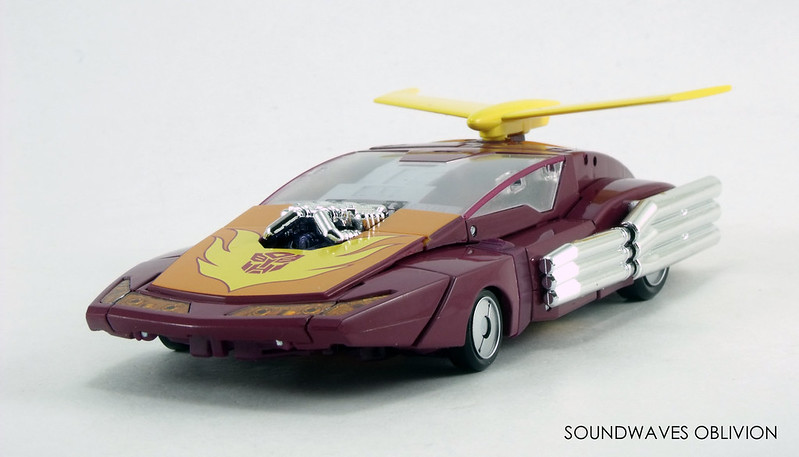 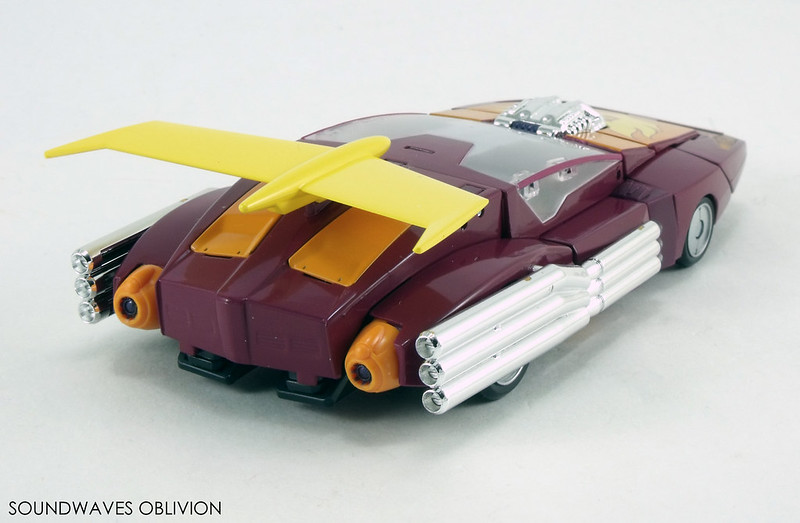 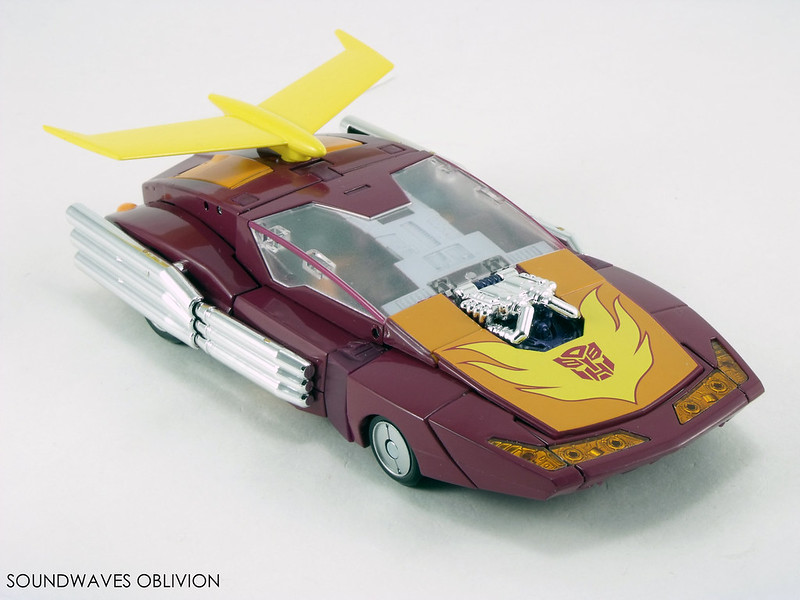 Vehicle Mode: Supercar (Translated from the instruction pamphlet)
Hot Rodimus’ vehicle mode is reminiscent of an American custom hot rod car, with a large exposed engine in the hood and painted flames on the body of the car. It has a futuristic feel to it which is common with the Cybertron warriors of the 2010 era. The beautiful and passionate vehicle mode is suitable for the young Hot Rodimus. Maximum speed of 193 km/h, when in motion he can emit shockwaves which can temporarily electromagnetise Destron microcircuitry. He can also drive underwater.
Hot Rodimus has a close relationship Daniel, the son of the first human partner, whom he enjoys taking out for carefree drives, rather than driving into battle. Because of his impulsive personality, he drives wildly in vehicle mode, much to the annoyance of veteran warrior Char, yet at the same time he still has the courage to confront the Destrons head on.
To reproduce the way this product appeared in “Transformers The Rebirth”, the Targetmaster Firebolt can fit on the hood to achieve a power up. 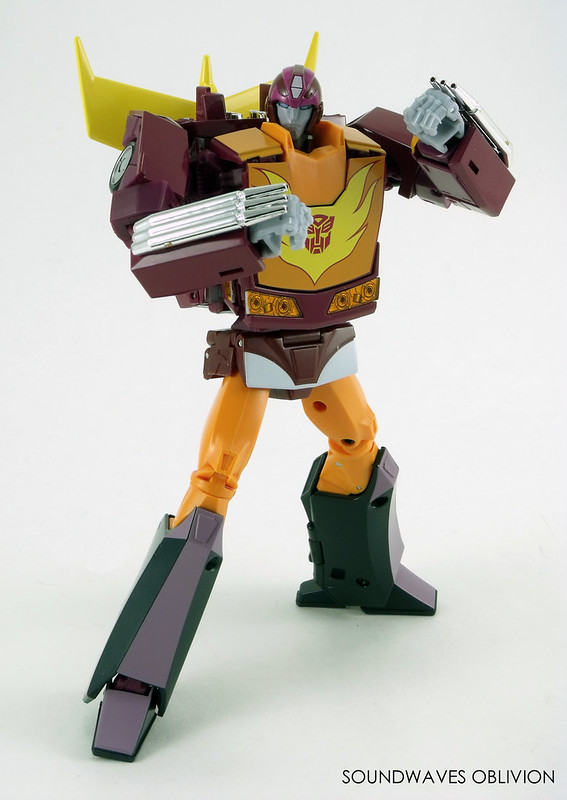 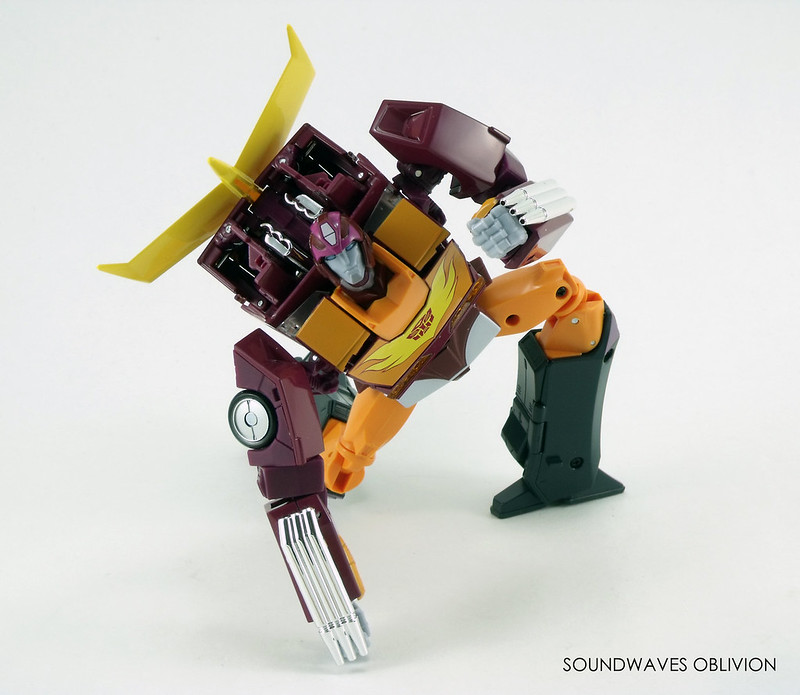 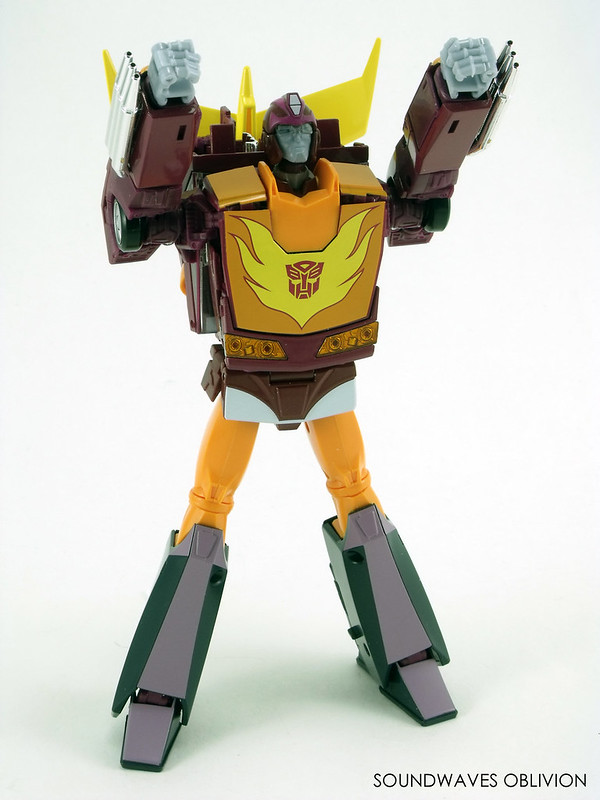 Robot Mode: Hot Rodimus (Translated from the instruction pamphlet)
Function: Cavalier
Motto: “My actions speak louder than words.”
Profile:
Cybertron Knight Hot Rodimus is a youth who dreams of becoming a hero. Due to his youth he has a tendency to act impulsively, something which veteran warriors struggle to understand so they end up judging him unfairly. His ability to take action is integral to the new generation of warriors and is part of Hot Rodimus’ appeal. Although hot tempered he is a faithful companion who faces any crisis head on, worthy of his Cavalier title. After the Unicron war he became the new Supreme Commander and afterwards returned the Matrix to the resurrected Convoy becoming a warrior once again. In the overseas continuity “Transformers The Rebirth” he was a participant in the battle on planet Nebulon over plasma energy. In the initial battle the Headmasters gave the Cybertron warriors new abilities but after an initial struggle with the Destrons, Targetmasters were added to their forces. By doing this Hot Rodimus (Overseas as Hot Rod) was powered up as a Targetmaster, borrowing the power of the Nebulon Firebolt. Hot Rodimus has made huge progress welcoming his new partner and becoming a pioneer. 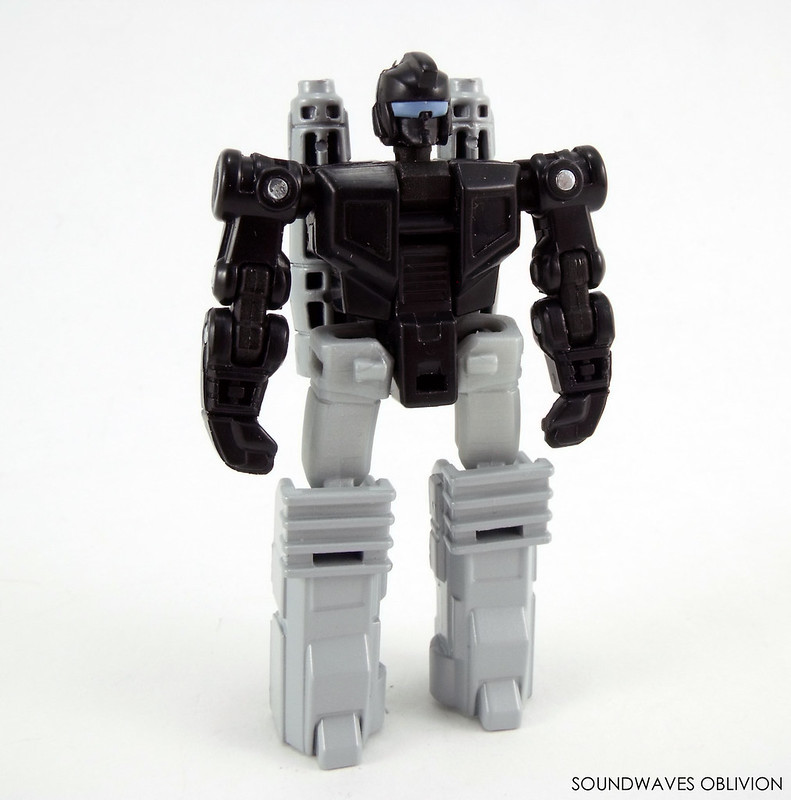 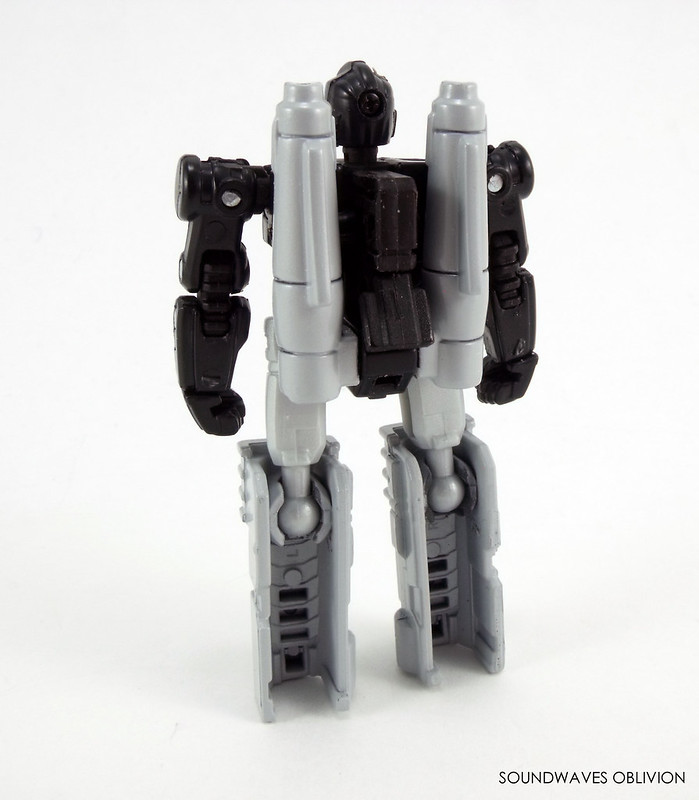 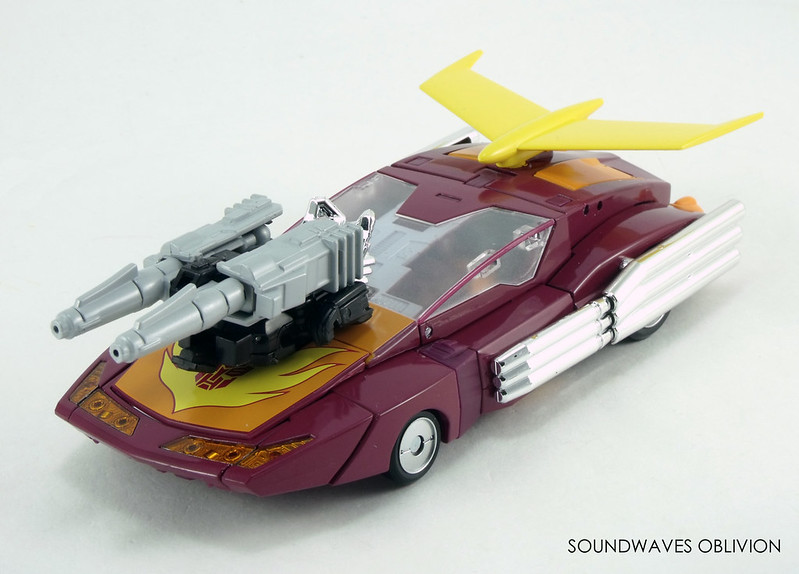 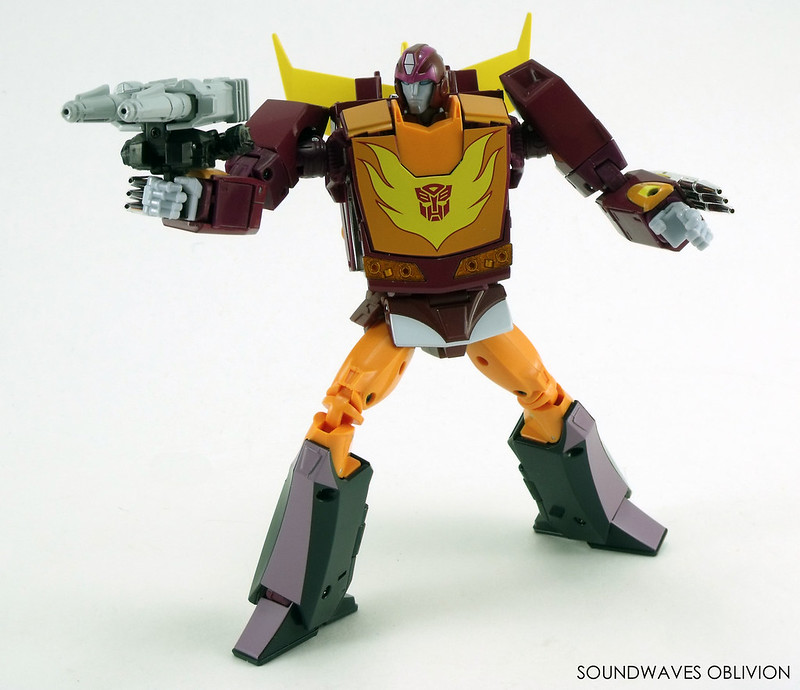 Weapon: Targetmaster Firebolt (Translated from the instruction pamphlet)
Firebolt transforms into an Electrostatic Discharge Rifle which has the ability to temporarily electrify Destrons micro-circuitry. He first appeared in “Transformers The Rebirth”, a Nebulon who was an atomic physicist and now seeks thrilling adventures with his good friend Hot Rodimus. 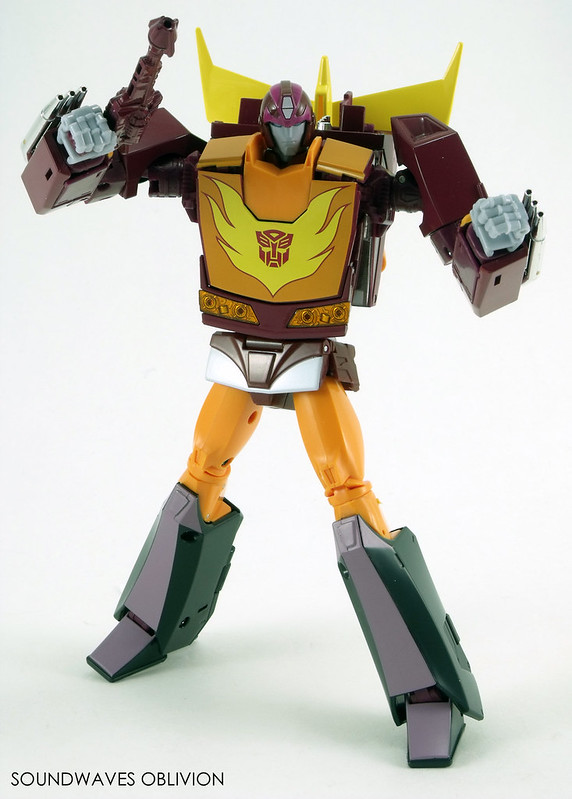 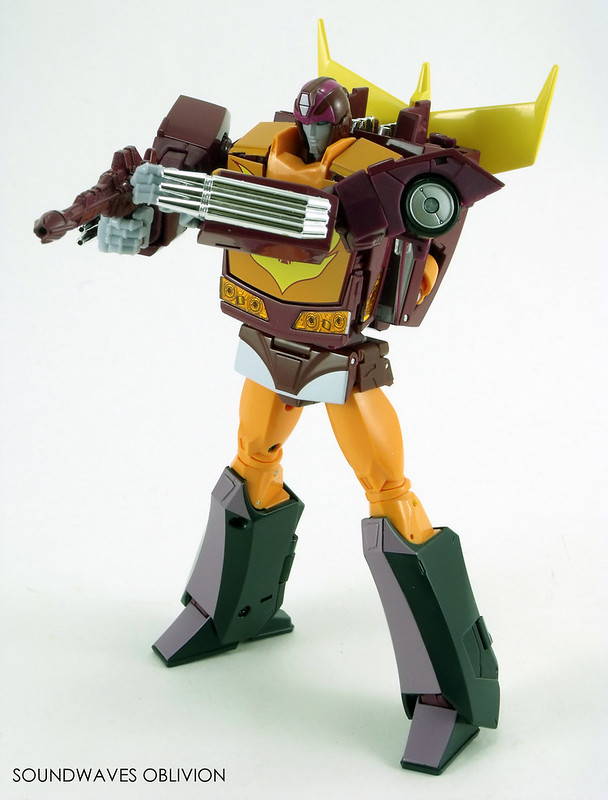 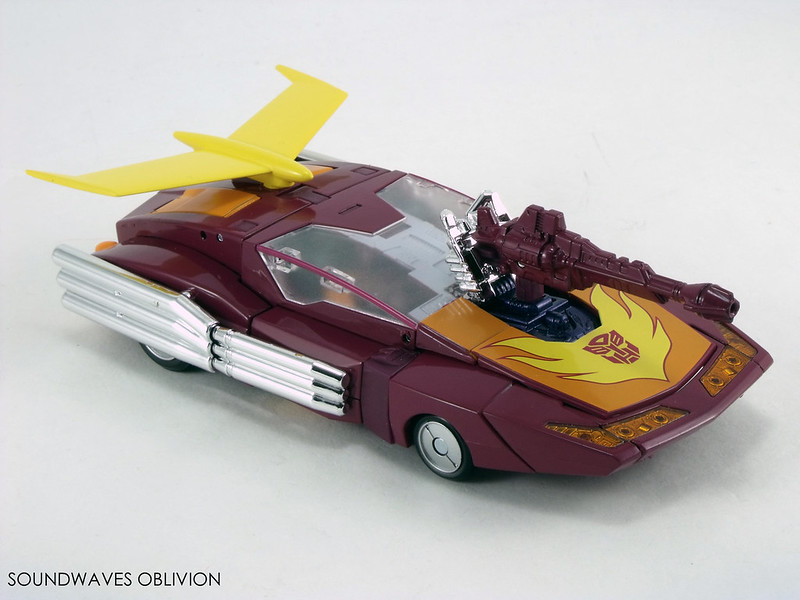 Weapon: Photon Laser (Translated from the instruction pamphlet)
A handgun equipped with Hot Rodimus which has a range of 6440m; combined with his shooting skills he demonstrates outstanding accuracy and power. He can also fire the weapon when driving by connecting it to his hood. 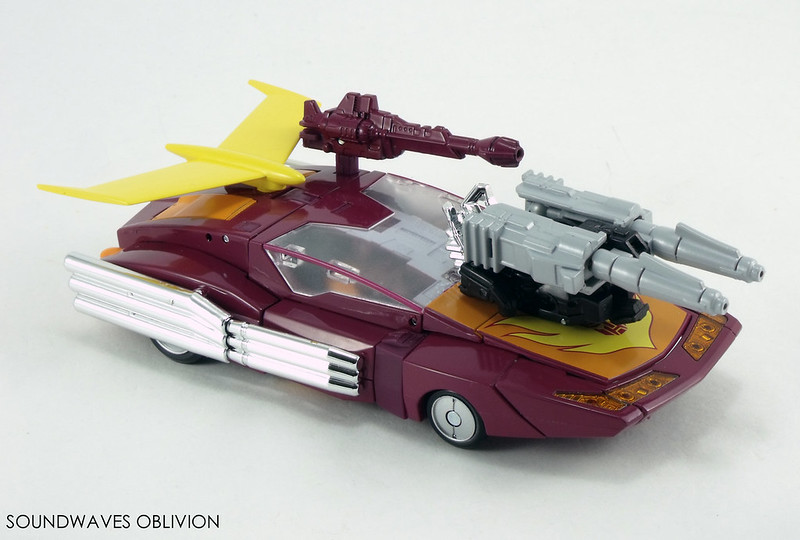 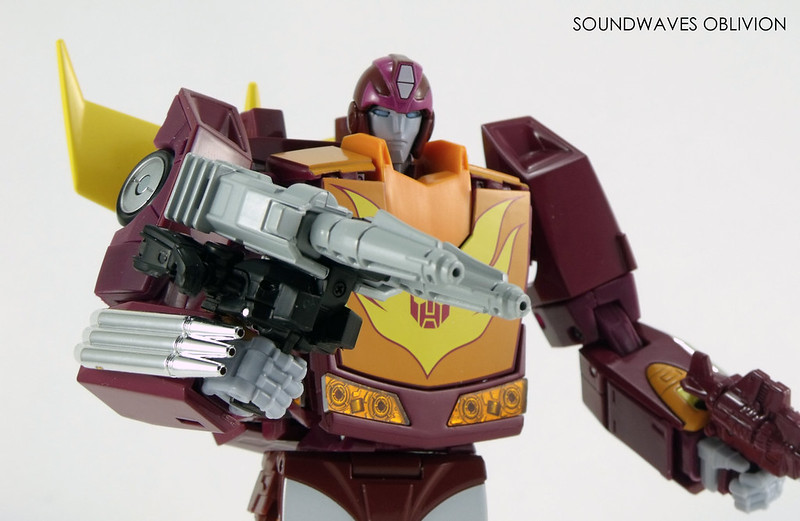 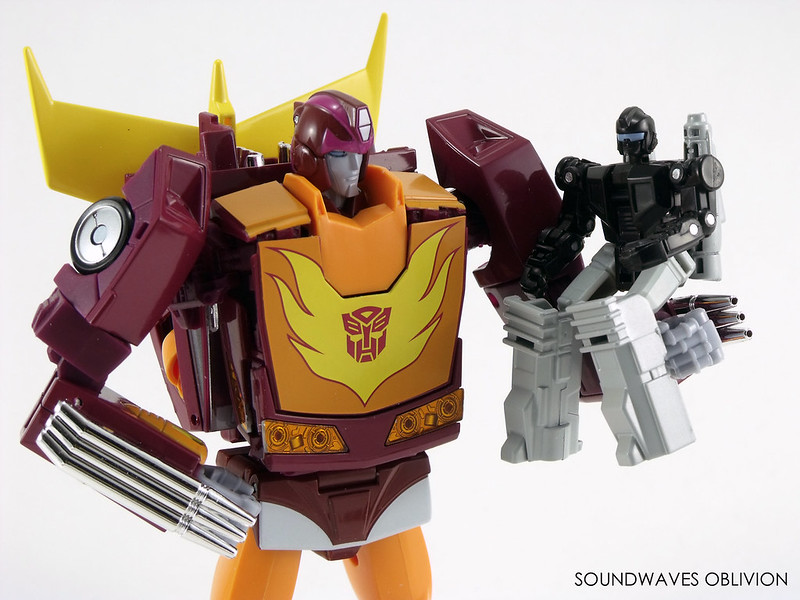 View the full gallery here on Flickr.
Posted by Jeremy Barlow at 08:04