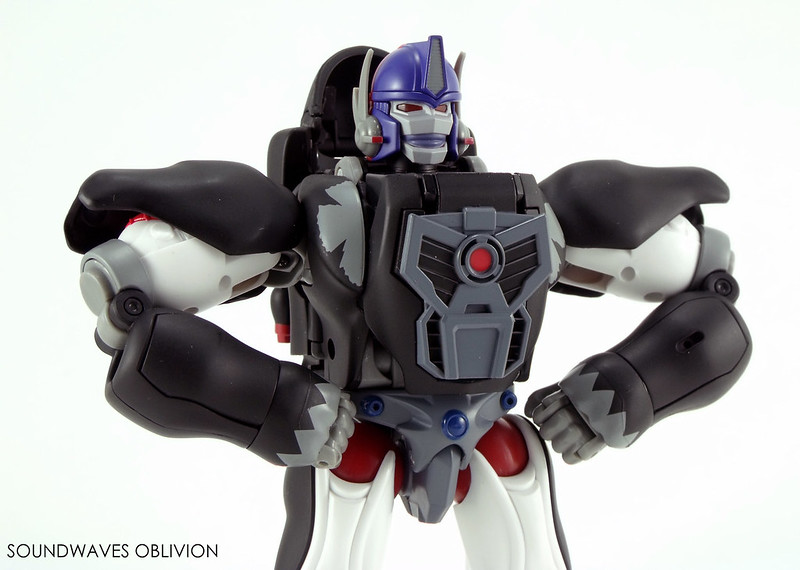 Profile (Translated from the Trading Card)
MP-38 Cybertron Commander / Convoy (Beast Wars) Legendary Leader Ver.
Function: Supreme Commander
Height: 2.8m (Robot Mode)
Weight: 2.0t (Robot Mode)
Profile:
The Legendary Supreme Commander Convoy, crossed time after being summoned by a Cybertron Warrior. In this far future on the planet Gaia during battle with Majin Zarak, his Energon Matrix shone red within his chest from being inspired by the future Cybertrons. After their victory, he bid his farewell to the future Cybertrons and then returned once again to the Beast Wars.
STR:10; INT:10; SPD:10; END:10; RNK:10; CRG:10; FBL:10; SKL:10 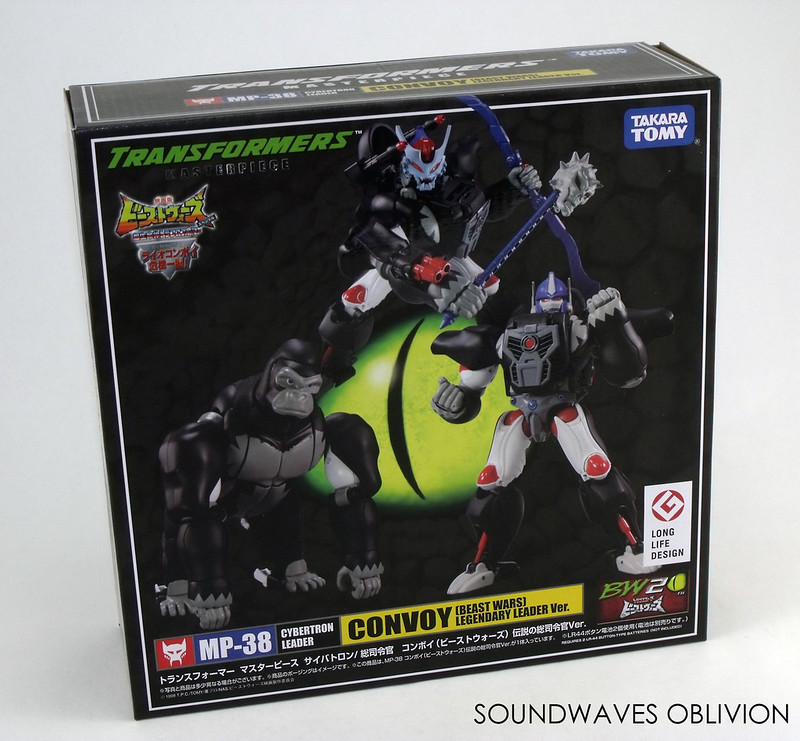 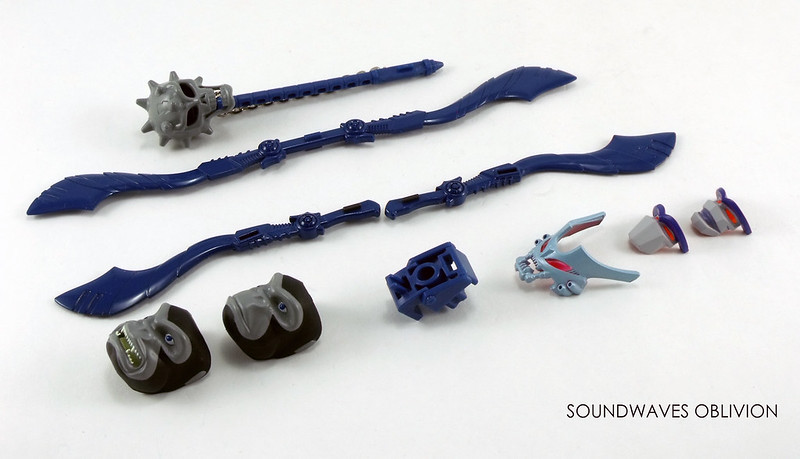 Released in June 2017, MP-38 Convoy is a straight repaint of MP-32 Convoy and also comes with a range of different accessories. Where MP-32 was based on the CGI model from the original Beast Wars series, MP-38 is based on Convoys appearance in the cell animated Beast Wars Second theatrical special episode, "Lio Convoy in Imminent Danger" from 1998. 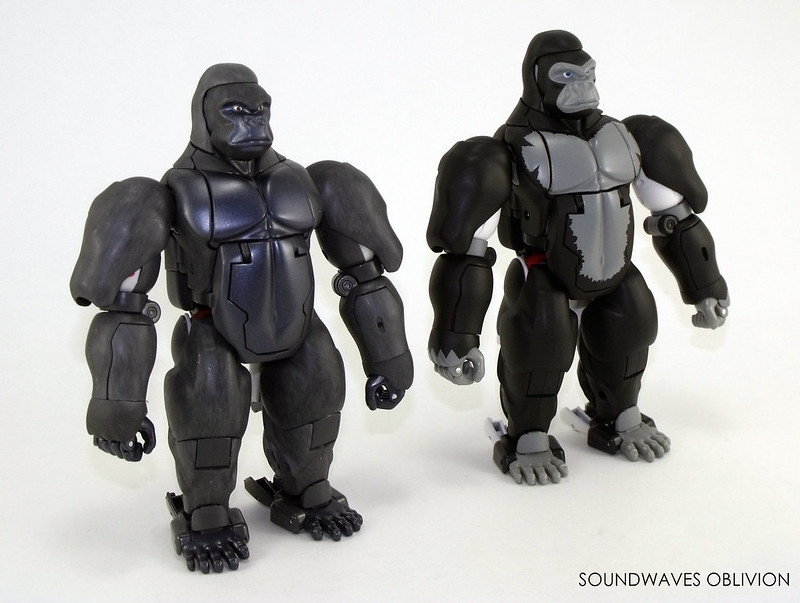 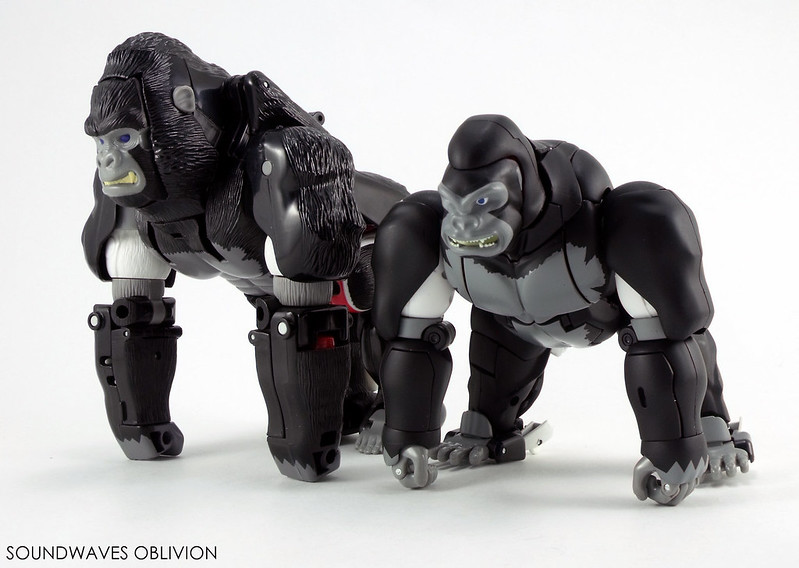 MP-38 Convoy's colour scheme is also similar to the original 1996 Ultra Class Convoy / Optimus Primal and as such MP-38 comes with a range of accessories based on the original toy such as the battle mask, mace and the double bladed sword which was depicted on the box art of Takara's release. MP-38 does not come with as many extra robot mode or beast mode faces as MP-32, coming only with the face plate and aggressive beast mode versions. 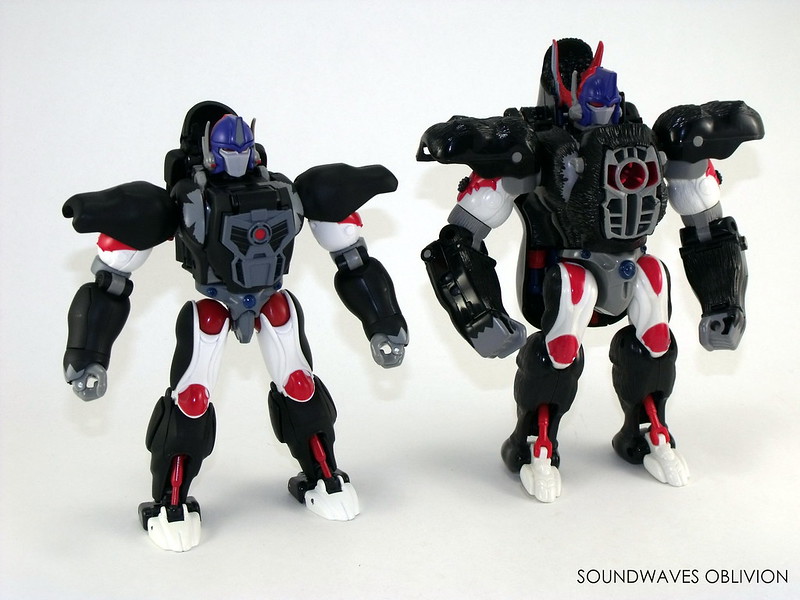 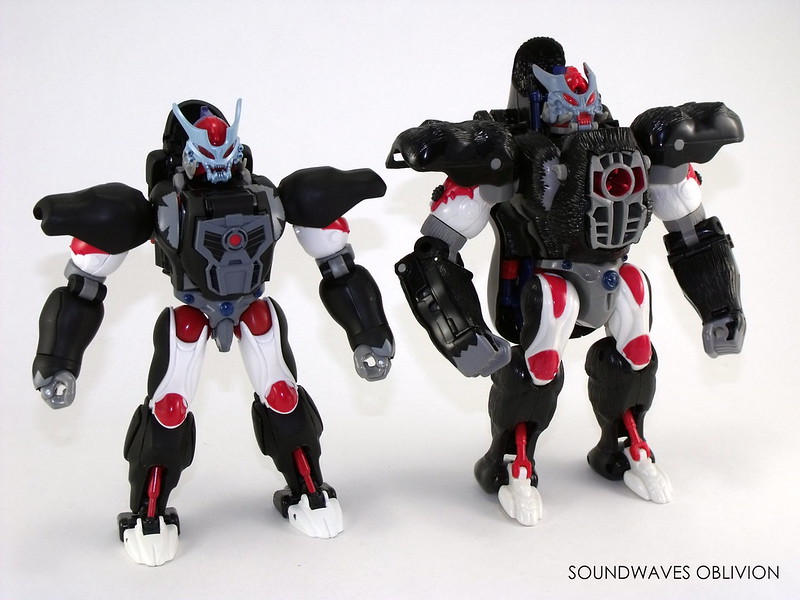 The original Ultra Class Convoy had moulded fur and MP-32 had fur effect however MP-38 is just smooth matt black replicating the cell animation. The flip out post on MP-38's back now has a function as it allows the weapon rack to be plugged in which holds the new accessories for this release - mace, battle mask and double sword. This release still has the small port in the left arm which still serves no purpose. Similarly with the original figure, for the battle / beast mask the robot head has to be turned around and the face mask is plugged into the back of the robot head. 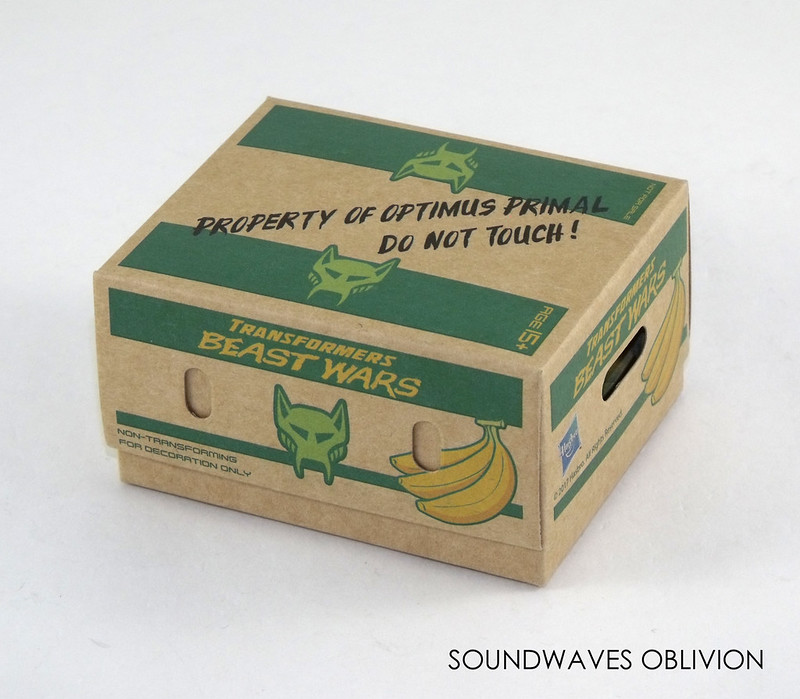 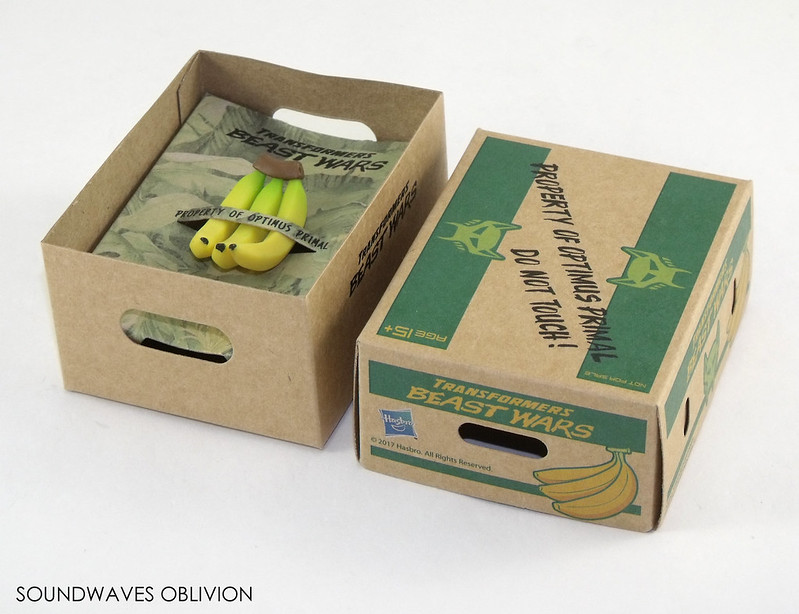 This figure would probably have best served as an exclusive release rather than in the mainline Masterpiece line as it doesn't add anything that original MP-32 didn't. It is a great figure but MP-32 is much better in my opinion. Paint chipping is an issue with this figure; on MP-32 there was a paint chipping issue on the upper arms where they rubbed against the shoulder pads but on MP-38 the issue is the chest which is a lot more noticeable. Take care when transforming from robot mode back into beast mode when folding out the chest, as the tolerance is quite tight it can rub against the side of the figure which will rub off the grey paint. This did not seem to be an issue with MP-32 but it is an issue I have found with my copy. 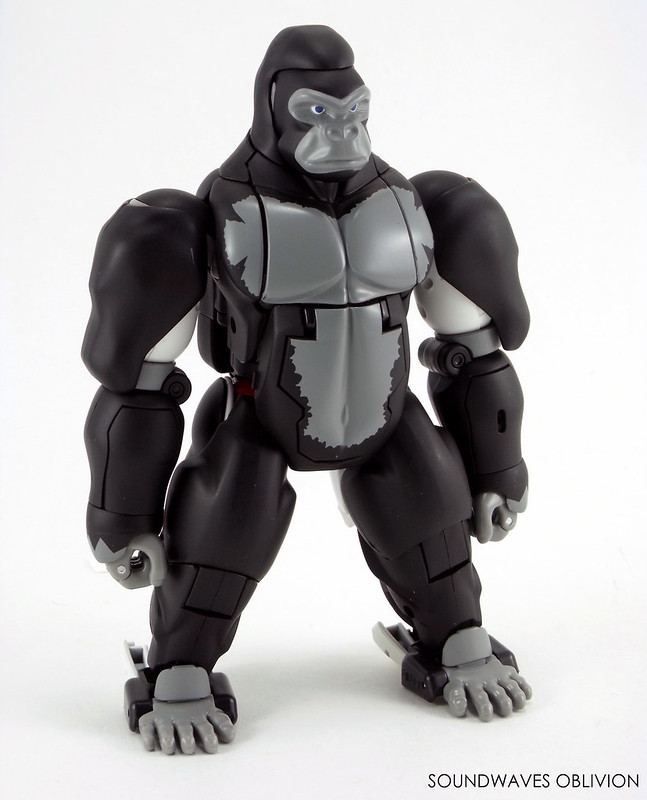 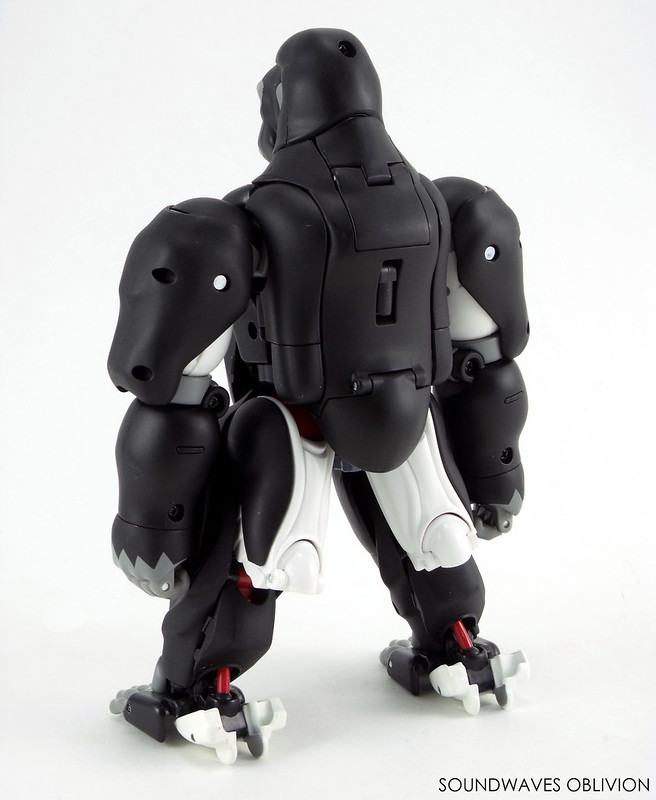 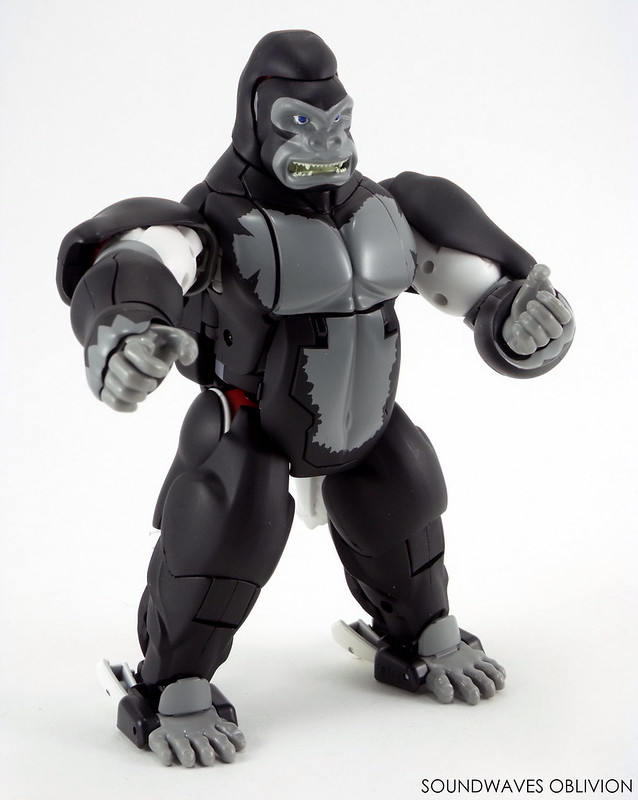 What this release is also doing is following Takara Tomys recent trend of releasing a cartoon accurate figure (MP-32) followed by a toy accurate figure, although MP-38 is also technically representing another cartoon appearance. 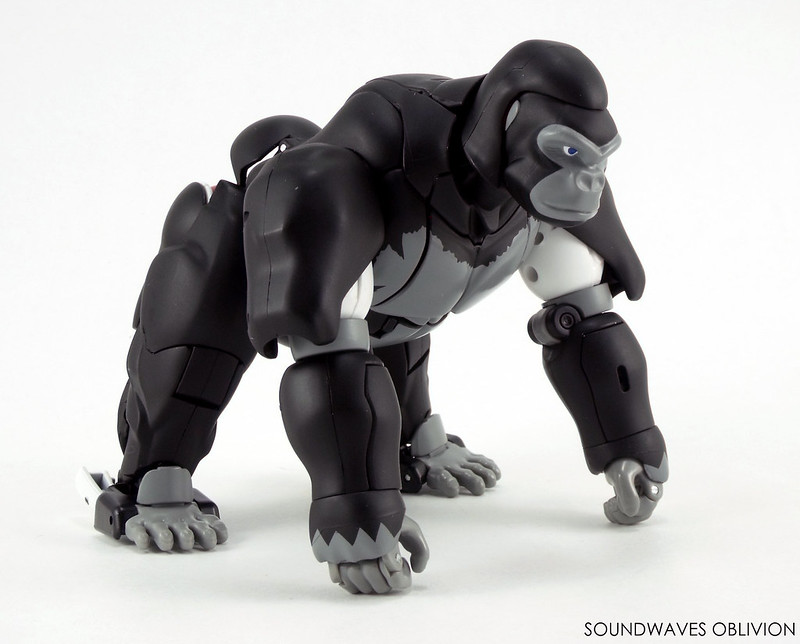 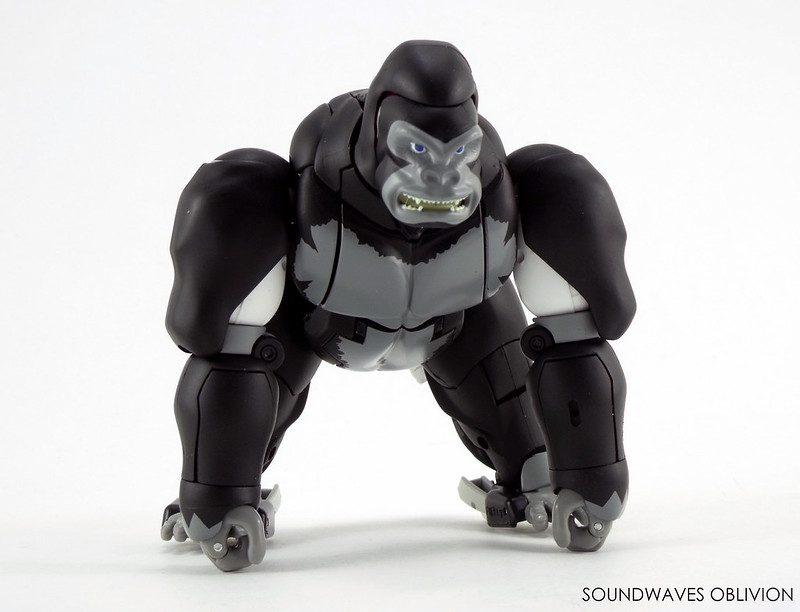 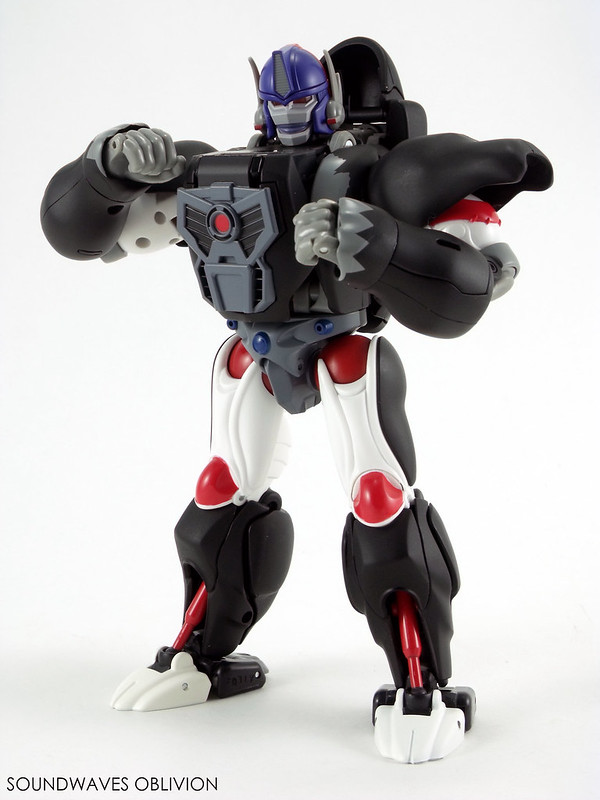 Cybertron Supreme Commander Convoy (Beast Wars) Legendary Leader ver. (Translated from the instruction pamphlet)
Function: Supreme Commander
Height: 2.8m (Robot Mode) Weight: 2.0t (Robot Mode)
Profile:
Transforms from robot to gorilla; in the Beast Wars he is the great leader of the Cybertron warriors, a position he will hand down in later years. The appearance of a gorilla has a powerful image as well as being known as the wise man of the forest; uses his variety of weaponry for sword fighting and shooting which is appropriate for the Cybertron Commander. Even though he is named Convoy, he is a different individual from the original Cybertron Supreme Commander Convoy. Coincidentally sharing the name of the legendary leader; he is the young captain of the spacecraft the Axalon who was given the mission to explore the universe. Has a serious sense of justice but is immature as a leader, disliking conflict. Following a battle with the Destrons led by Megatron who had stolen the Golden Disc, they crash landed on planet Energoa which started the Beast Wars. He occasionally panicked and was reckless due to the strength of his responsibility, however he managed to gather his troops and overcome the hardships together. He would become a great leader worthy of honouring the original Convoy both in name and conduct. Millions of year later there would not be a Cybertron warrior who did not know of his prestige. In order to fight against the threat of Majin Zarak, summoned by Galvatron using a transport gate which had crash landed, Magnaboss summoned this legendary warrior using the last of his own power source. This figure not only helped free the Cybertron warriors buried beneath tons of rubble but also gave them the courage to spur on. Convoy and Lio Convoy, two Convoys separated by an era now stood firmly together. The Energon Matrices shone in their chests turning them into Burning Convoy and Flash Lio Convoy enabling them to defeat Majin Zarak. This battle was the first time the Legendary Commander was not ashamed of his name. After the battle he entrusted the future to the young Lio Junior who will lead the next generation; he then returned to his original timeline. 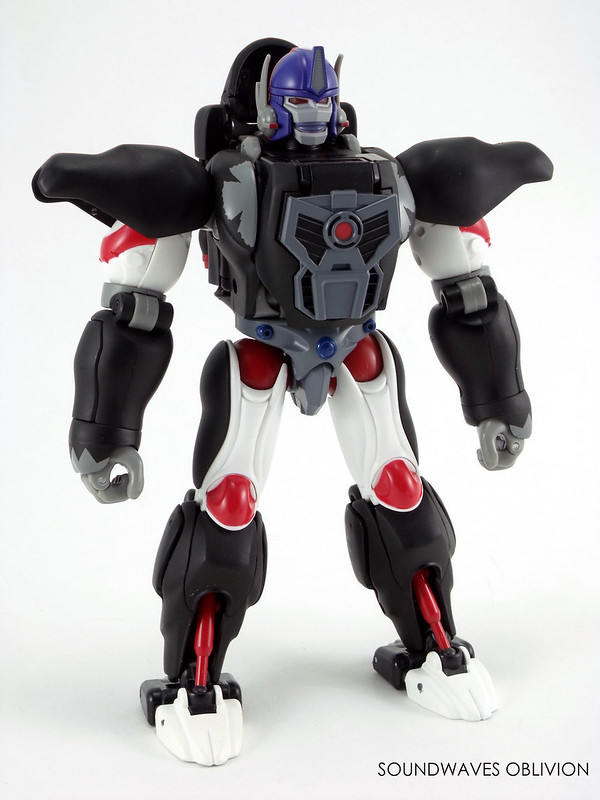 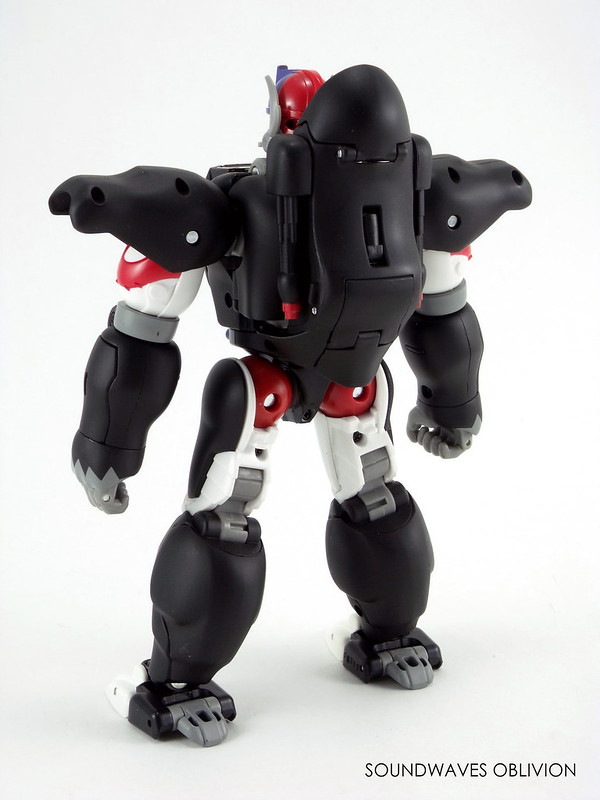 Weapon: Cyber Blade / Double Blade (Translated from the instruction pamphlet)
The Cyber Blades, Convoys hand held weapons, have appeared many times throughout the show. The two swords are impressively sharp and are used skillfully by Convoy such as the time he cut off Megatron’s right arm. The Double Blade is a double edged sword when the handles of the two swords are connected and requires great skill in handling. It can be wielded in one hand as seen in the original illustration with the appearance of an aggressive looking Convoy. 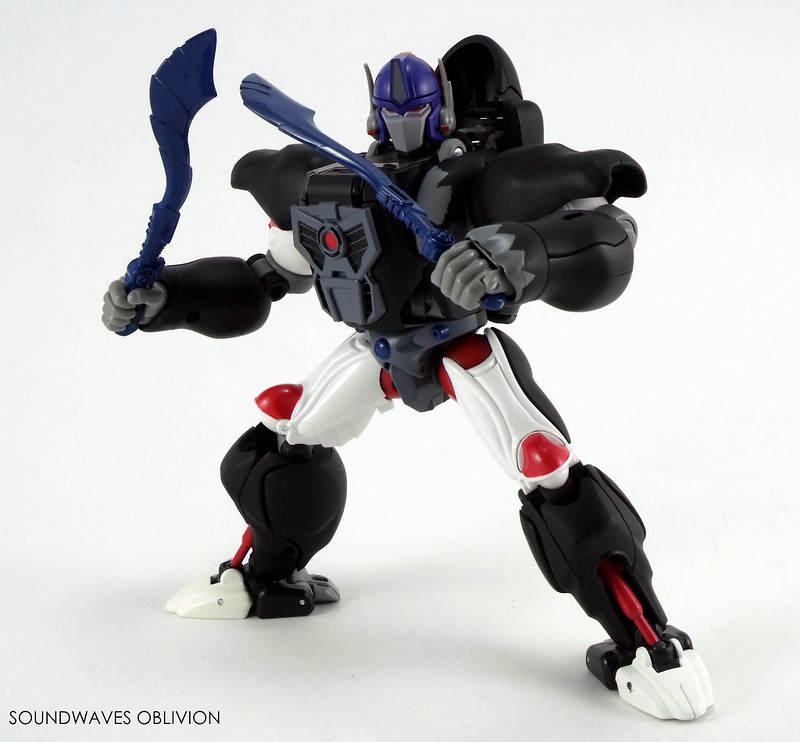 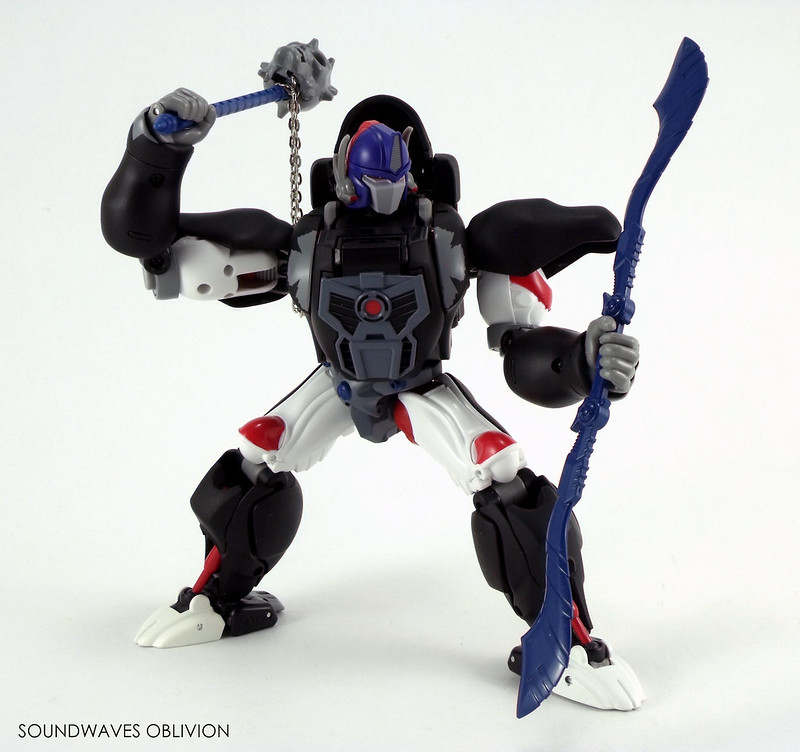 Weapon: Hammer (Translated from the instruction pamphlet)
An aggressive looking skull hammer which embodies Convoys wild side. When his main firearms can’t be utilised such as close combat, he demonstrates its power, swinging the skull to crush his enemies. It can also form a club mode allowing more direct strikes. This bizarre weapon with spikes growing from the skull represents the violence of the Beast Wars. 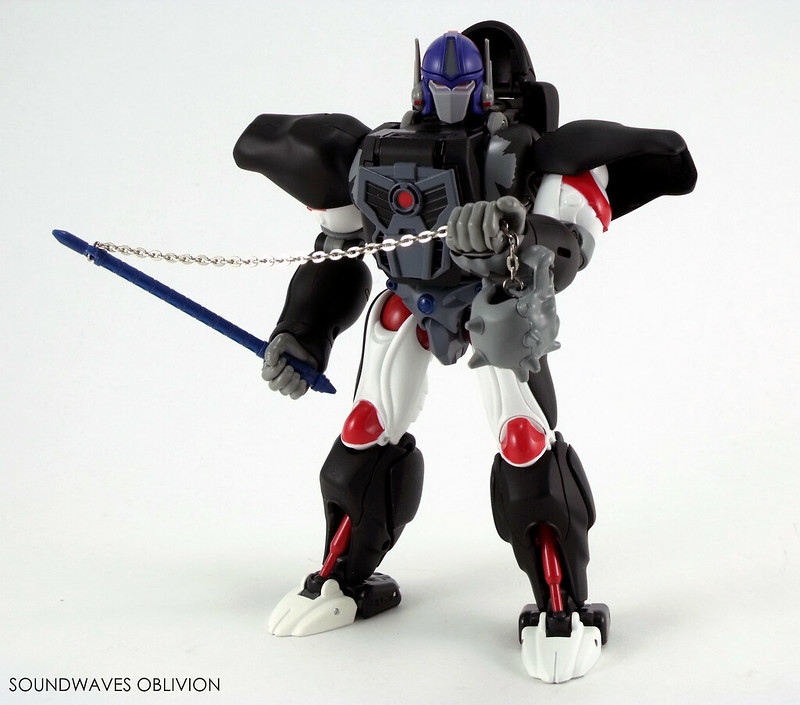 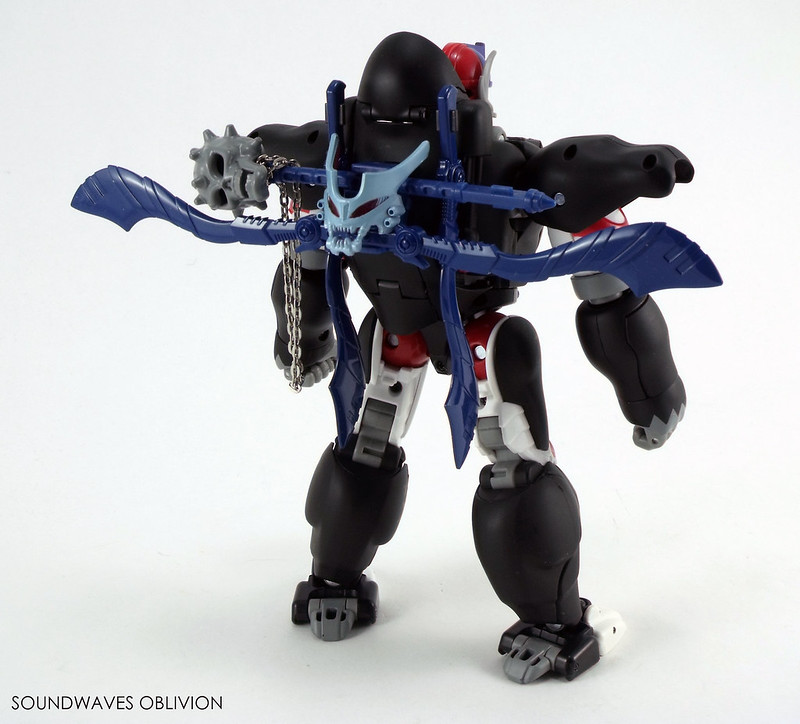 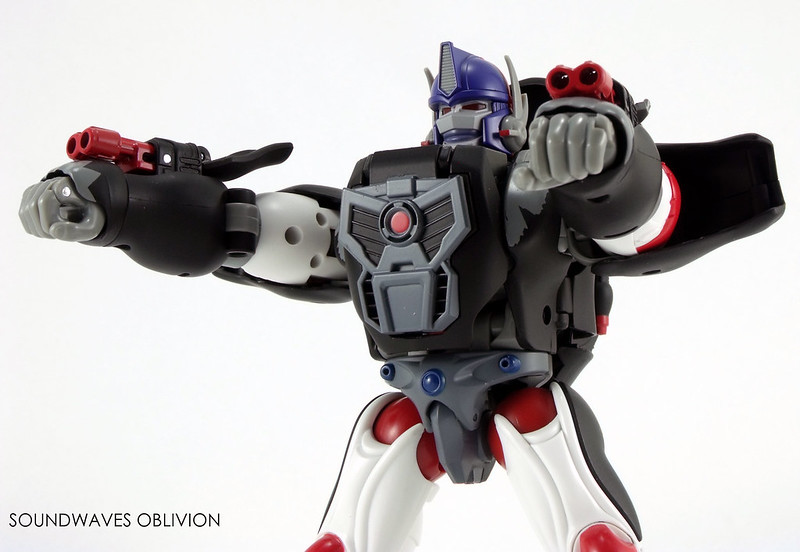 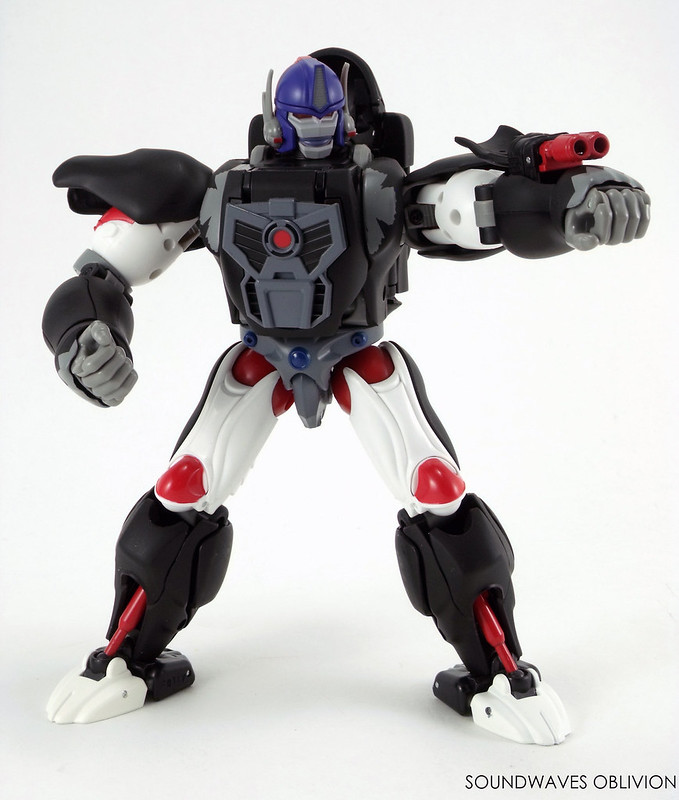 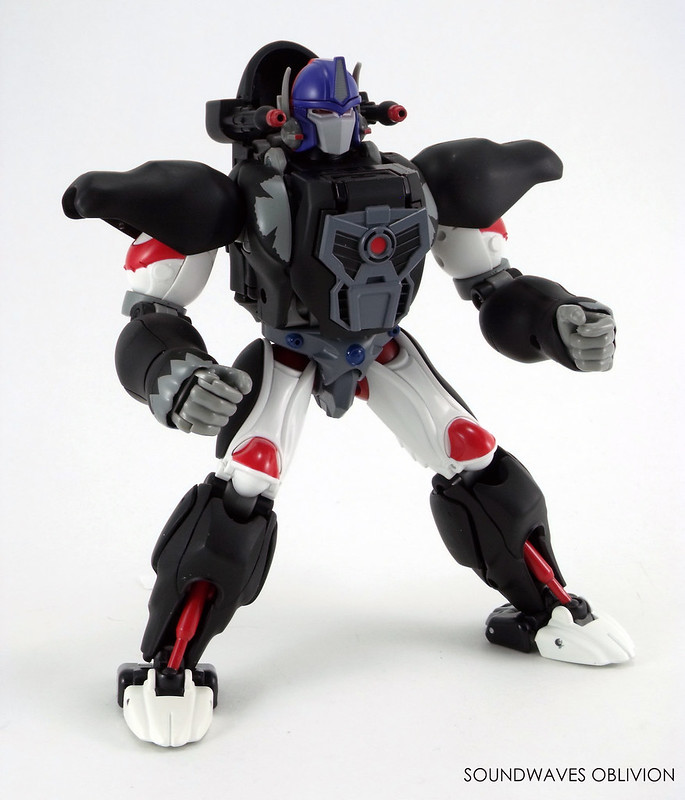 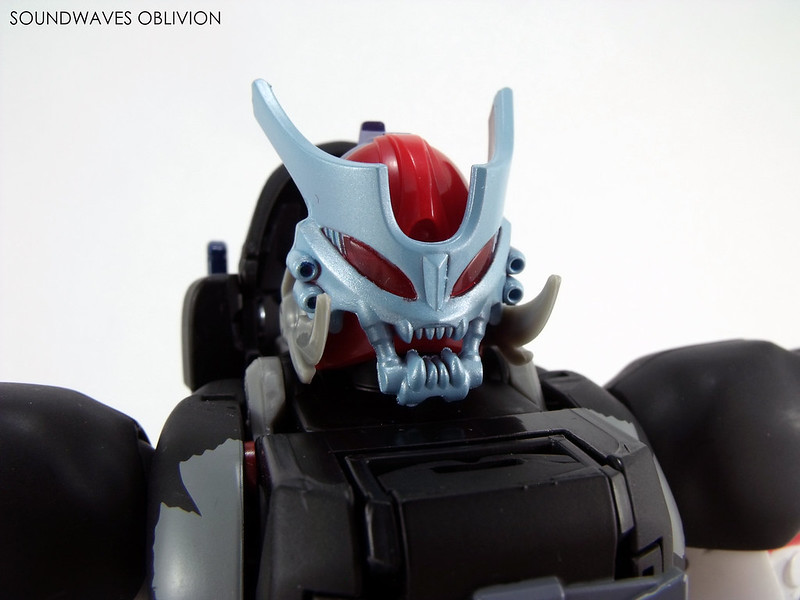 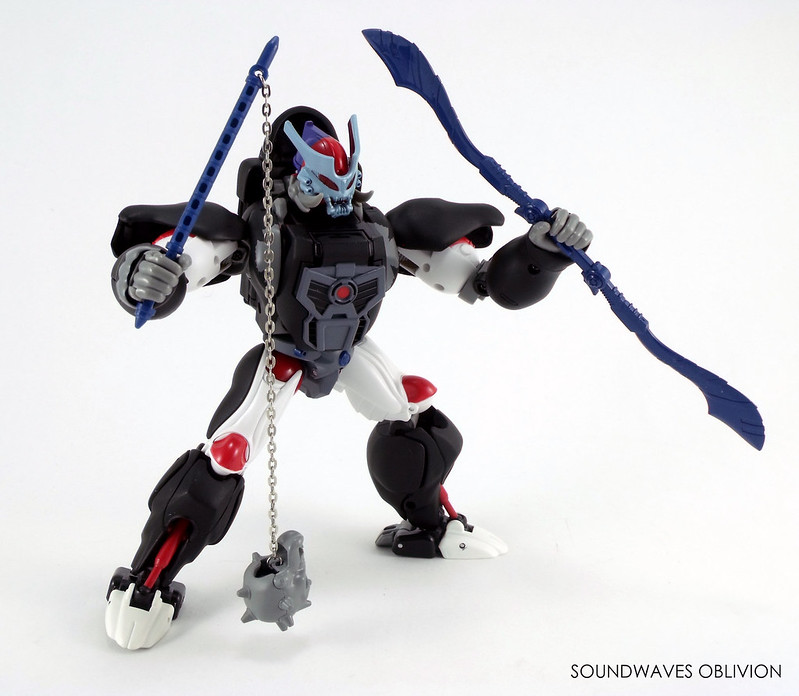