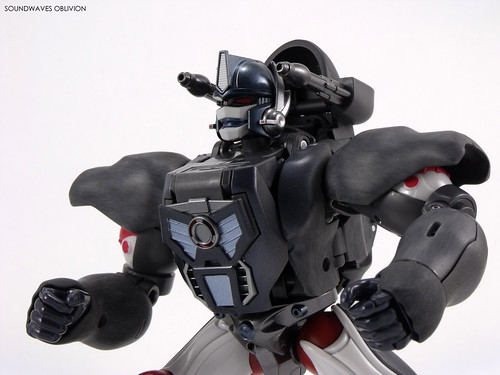 Profile (Translated from the Trading Card)
MP-32 Cybertron General Commander / Convoy (Beast Wars)
Function: General Commander
Height: 2.8m (Robot Mode)
Weight: 2.0t (Robot Mode)
Profile:
Convoy, the General Commander of the Cybetrons, transforms into a gorilla. Powerful with a sense of justice; he was unexpectedly drawn into a battle against the Destrons led by Megatron. Still an inexperienced leader, he grows in maturity together with his companions. With the secrets of an unknown alien planet, Megatrons ambitions along with a variety of mysteries and speculation, they are swept into the battle of the Beast Wars.
STR...10; INT...10; SPD...10; END...10; RNK...10; CRG...10; FBL...10; SKL...10 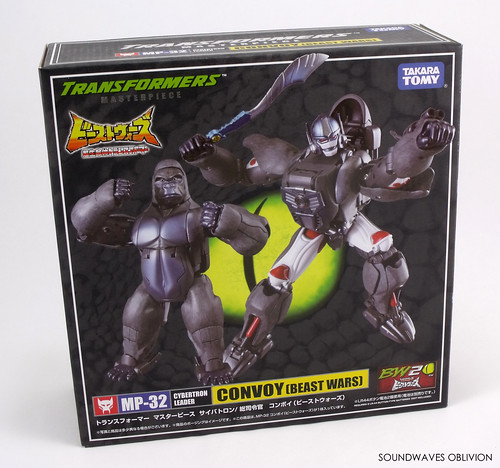 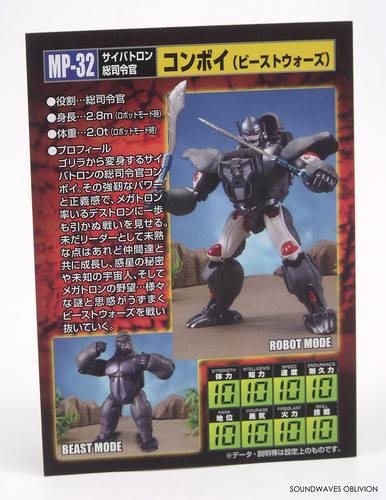 During the Generation 2 period of Transformers I was losing interest in Transformers; however in 1997 I came across the Beast Wars range. I was unfamiliar with the line and did not realise they were a spin off of the Transformers brand, especially when I saw the Kenner logo not realising at the time that they were now a subsidiary of Hasbro. Incidentally, catch The Toys That Made Us episode on Star Wars on Netflix which looks at the rise of Kenner in the late 1970's. 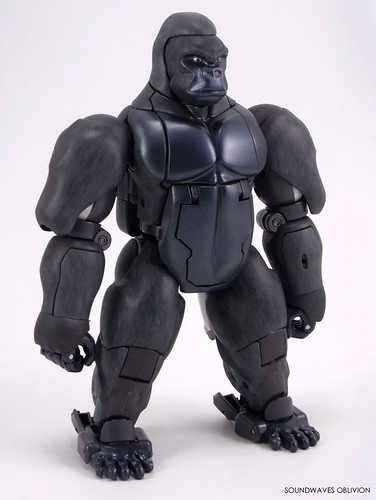 The figure that caught my eye was the Ultra Class Optimus Primal and I bought it for £16.99 and was not disappointed. I then found the Beast Wars show was airing on Television and caught a few episodes. The original figure was nothing like the CGI version and this is where the Masterpiece version shines. 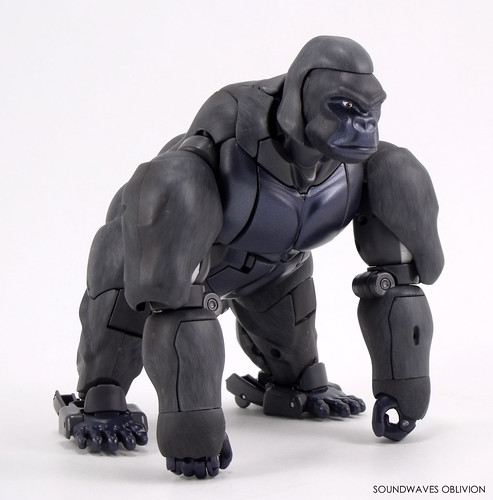 
Convoy comes packaged in beast mode and is a replica of the CGI appearance. To replicate the basic CGI model of the time, the beast mode does not feature moulded fur like the original figure but the fur effect has been applied using water transfer printing. Like the TV show Convoy can stand upright in Beast mode and can also stand on all fours like the original Ultra Class figure. There are three gorilla faces to choose from, neutral, smiling and angry. Transformation to robot mode is simple but being a Masterpiece figure there are a few twists and turns to make it more involved. Care needs to be taken when lowering the arms from the shoulder pads as the red paint on the upper arms will scratch off. 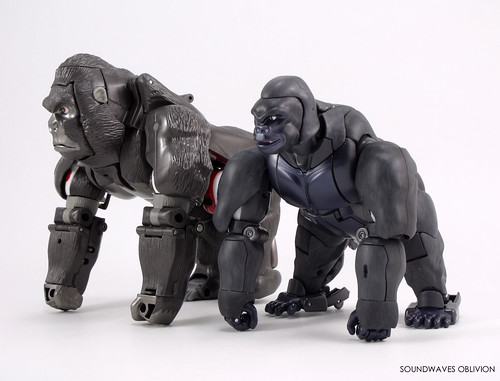 In robot mode Convoy has a range of features, both forearm panels flip up revealing cannons, cannons on the robot mode back flip up for the shoulder cannons, the cannons flip back down and a booster on the robots back flips out replicating the Convoy Jet. Two Cyber Blade weapons fit in the robots back much like the original figure. The figure does not come with a mace weapon like the original however, when bought through Hasbro Asia, Convoy comes with a die cast mace accessory which is packaged in a small banana crate box. Convoy also comes with four different faces - neutral, smirking, angry and the face plate version. The robot head also features light up eyes, the batteries are stored beneath the beast mode head which needs to be removed to install the batteries. When you push the head down the eyes light up and stay lit for 10 seconds before fading out. Its not a feature I would use and I would rather not have this gimmick as the inclusion of the electronics have made the head very stiff and difficult to pose. 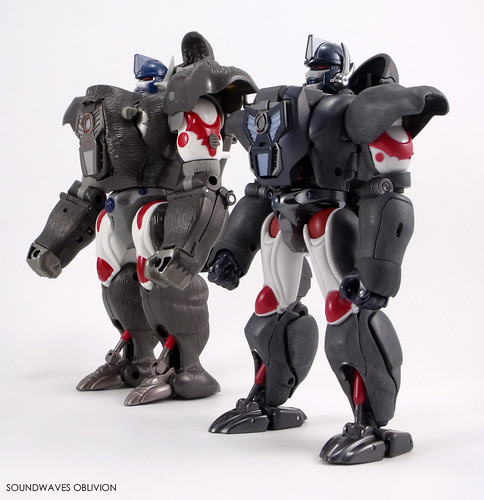 There are 2 undocumented features, one of which is a small hole/ port in the left arm - possibly for a communicator or a feature that was scrapped after development. The MP-38 Convoy Legendary Leader does not come with any accessory to fit this port. The second undocumented feature is a peg on the back of the figure. Many have used this peg to attach the Deluxe 2014 Generations Rattrap / LG-01 Rattle in beast mode, however the MP-38 release used this peg to attach a weapon rack. 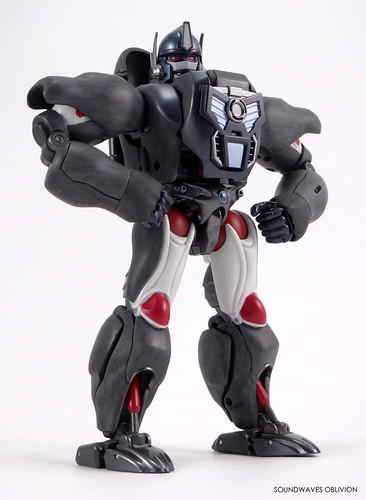 Overall this figure is a must buy especially for a Beast Wars fan, the only negative is the price; the figure retailed at 12000 Yen which is around $110 / £80. 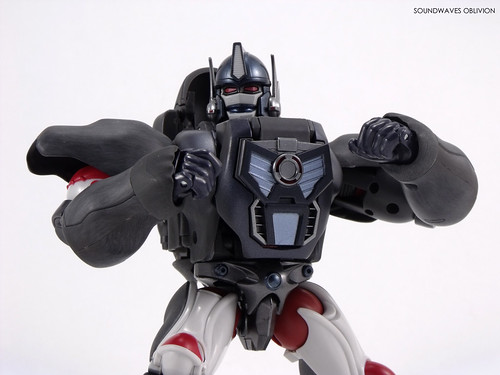 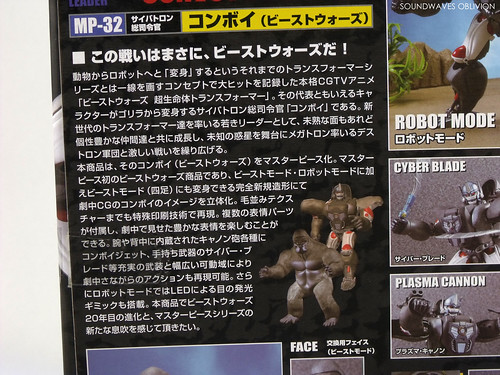 ■ The battle is Beast Wars! (Translated from the back of the box)
A departure from the previous Transformers series, “Beast Wars Super Robot Lifeform Transformer!” is a full CGI animation with the concept of robots transforming into animals. The character who represents this series is Convoy, the Cybertron General Commander who transforms into a gorilla. A young leader of the new generation of Transformers; together he quickly matures alongside his inexperienced friends in the battle against Megatron and his Destrons on an unknown world. This item is a Masterpiece version of Convoy (Beast Wars) and is the first ever Masterpiece Beast Wars figure. It can transform from beast mode to a four legged beast mode and then into robot mode. It is a perfect representation of Convoy from the CG animation. The textured fur has been recreated using specialist printing technology. It also comes with multiple facial expressions as seen in the animation. It comes with a wide range of armaments, from cannons built into the arms and back, the Convoy Jet and hand-held weapons such as the Cyber Blade. It has a wide range of articulation allowing you to reproduce many poses from the show. It also has a light up LED eye gimmick in robot mode. We hope this product demonstrates the evolution of Beast Wars in the past 20 years, as well as a breath of fresh air into the Masterpiece series. 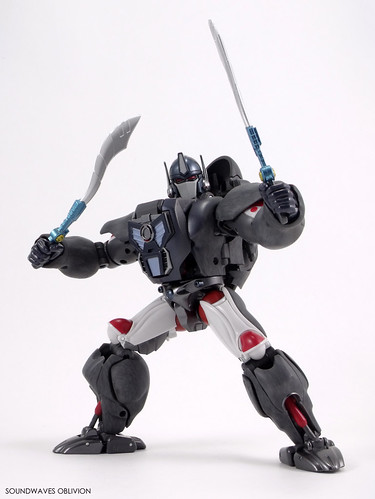 Convoy (Beast Wars) (Translated from the instruction pamphlet)
● Function: General Commander
● Height: 2.8m (Robot Mode) ● Weight: 2.0t (Robot Mode)
● Profile:
Convoy is the leader of the Cybertrons in the Beast Wars and transforms his appearance from gorilla to robot. Although named Convoy, he is not the same Convoy who commanded the original Cybertron forces but a new generation of warrior, sharing the name of the legendary leader. During a space exploration mission, the Cybertrons found themselves pursuing a Destron ship to retrieve the Golden Disc, stolen by the new generation Megatron. Both ships were caught in a transwarp and crash landed on an unknown planet...here the Beast Wars began, sending Convoy and his crew on a fateful journey. The planet they landed on was rich in Energon which their robot modes could not withstand for long periods of time; they therefore scanned the appearances of local wildlife and gained beast modes. Convoy chose the appearance of a gorilla. The gorilla is a most suitable form for a Cybertron leader; they have a large and powerful presence yet are calm and wise, often called the wise man of the forest. Convoy has a burning sense of justice but he is still a young and immature leader. It often takes him time to call on his comrades and because of his sense of responsibility, he often acts alone and finds himself in trouble. Through battle Convoy has grown in experience along with his comrades and has become a leader worthy of his name. He dislikes the futility of war and hopes to stop the Destrons without hurting them. Although Convoy dislikes fighting he has sufficient fighting power and is more than evenly matched when battling veteran Destron warriors and is a match for Megatron the Emperor of Destruction when toe to toe. Good at brawling but will utilise a variety of tactics depending on the circumstances such as his built in weapons like his cannon gun and twin sword. He can also take part in aerial battles using the booster equipped on his back. In order to prevent planetary destruction Convoy would embark on a suicide mission to trap Megatron, even if it cost him his life. This however was only the beginning of the great battle that would decide the fate of Planet Seibertron. 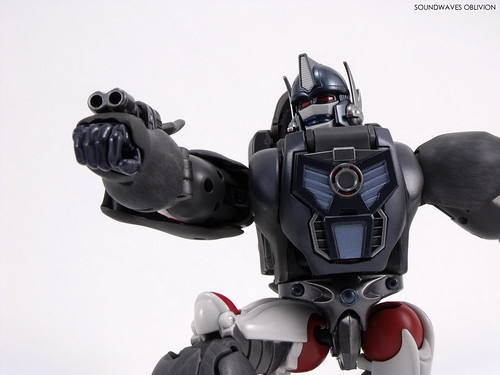 Weapon: Plasma Cannon (Translated from the instruction pamphlet)
Built into both arms, each cannon has twin barrels and are Convoy's main weapons for combat. Both weapons can fire simultaneously; the cannons have such high power a blast penetrated the body of Tarans in close quarters. Useful for firearm battles at medium range and Convoy can also fire them when in flight. 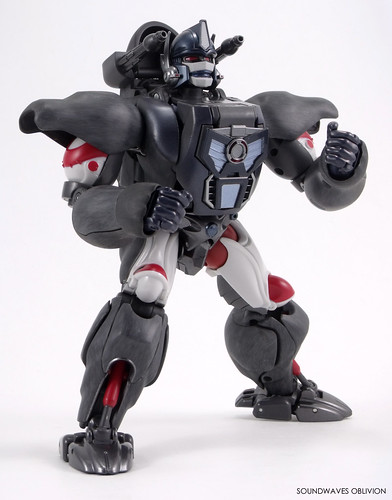 Weapon: Mega Blaster (Translated from the instruction pamphlet)
Cannons built into Convoy's back which are deployed and mounted on his shoulders in battle. Mainly used for long distance targets or utilised during aerial battles. In ground combat they are highly capable at firing at aerial targets, picking off Destron warriors such as Terrorsaurer and Waspeeter, as well as being able to intercept missiles. The Mega Blaster can also be used alongside his Convoy Jet when in flight. 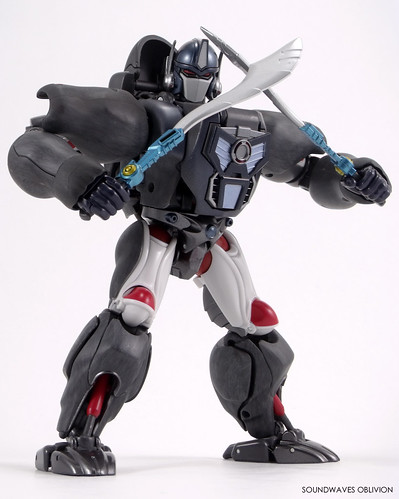 Weapon: Cyber Blade (Translated from the instruction pamphlet)
These twin swords are Convoy’s hand-held weapons. Although Convoy excels with his firearms, he is also a skilled swordsman. This is a skill which came in handy during his one on one fight against the veteran warrior Dinobot. The swords are incredibly sharp however there are a few scenes where Convoy does not utilise them to their full potential, refusing to hurt others more than necessary. However when he was confronted by Megatron, in the heat of the moment he sliced off Megatron's right arm with a single blow. 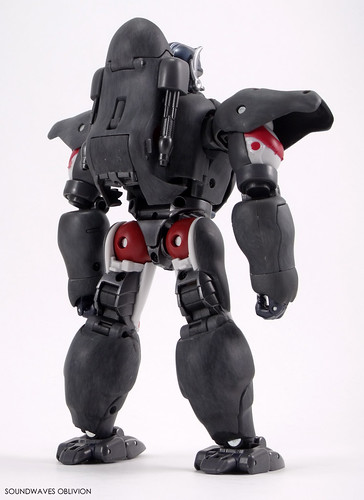 Equipment: Convoy Jet (Translated from the instruction pamphlet)
Convoy is one of the few Cybertrons who can fly, and can do so with the Convoy Jet built into his back. Used frequently when rushing to an incident or when carrying his friends. Because of this he is often targeted by the enemy but he has rarely been shot down. It is however an important piece of equipment and has saved the Cybertrons countless times, such as when he slowed the descent of his crashing ship with his friends on board. 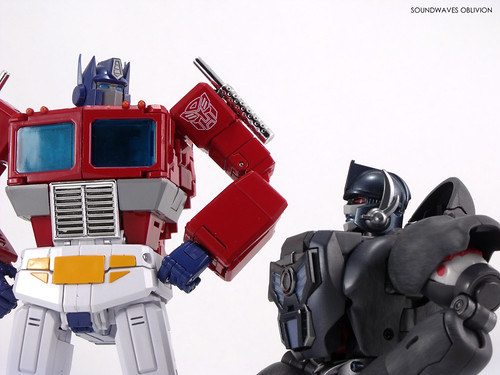