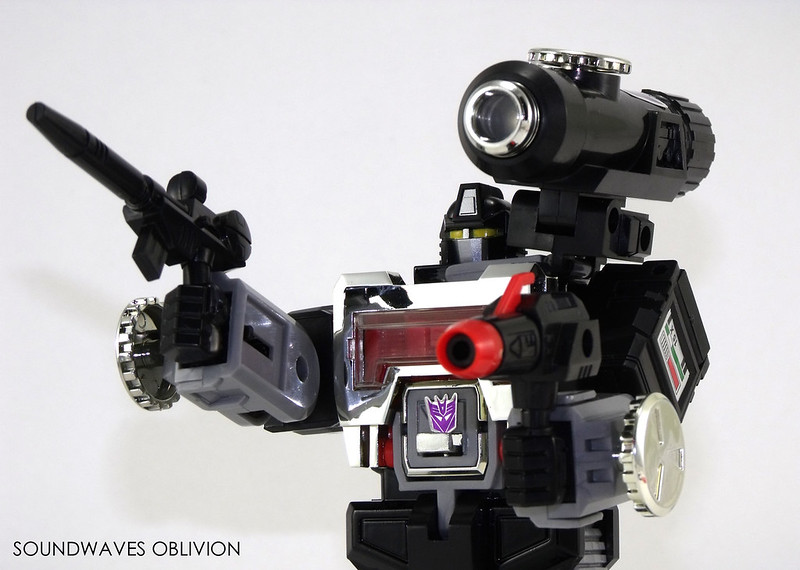 Profile (Translated from the Trading Card)
68 Destron / Joint Force Magnificus & Ga’mede
Status: Outcast (Magnificus)
Function: Volunteer Soldier (Ga’mede)
Transformation: Tank / Tech Bay
Background:
Once the military consul of the Destron-controlled territory Mebion, Magnificus was snared in a cunning ruse by high-ranking Destrons envious of his position, and forced to become a pit fighter in the distant reaches of the galaxy. His partner, Ga’mede, was a member of the royal family of Planet Xeptos of the subatomic microcosmos, but was rescued into the macrocosmos by Magnificus’s matter-enlarging scope just as he faced execution after an internal feud. Soon forming an unspoken bond of trust fueled by their similar experiences, the two traversed countless battlefields and badlands, amassing sufficient wealth and armaments for the day when they would exact merciless revenge on those who betrayed Magnificus.
Weapons: Zero-Point Cannon, Ion Rifle, Spear Gun (Magnificus)
Weapons: Pulsar Rifle, Magno-Gun, High Frequency Machete (Ga'Made)
STR:10; INT:10; SPD:5; END:10; RNK:8; CRG:10; FPR:10; SKL:10; TTL: 73 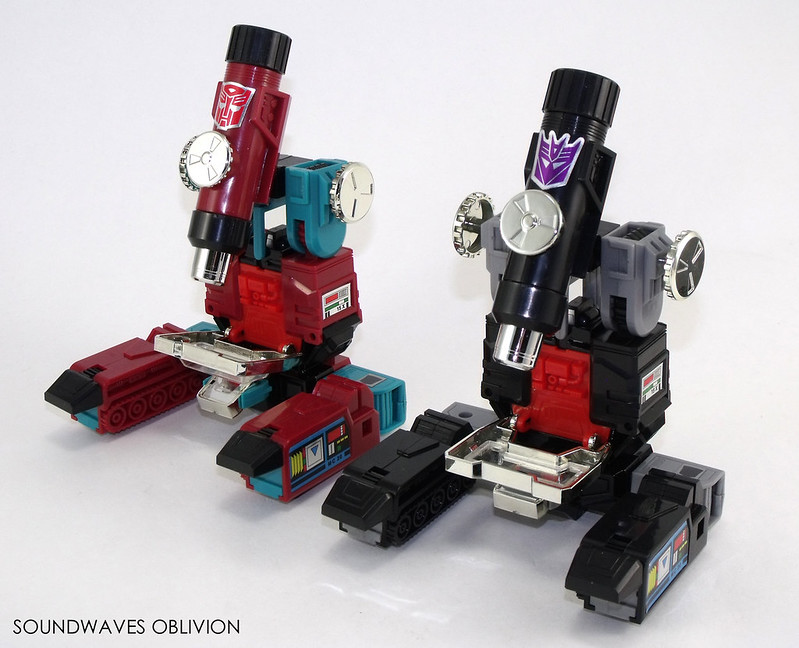 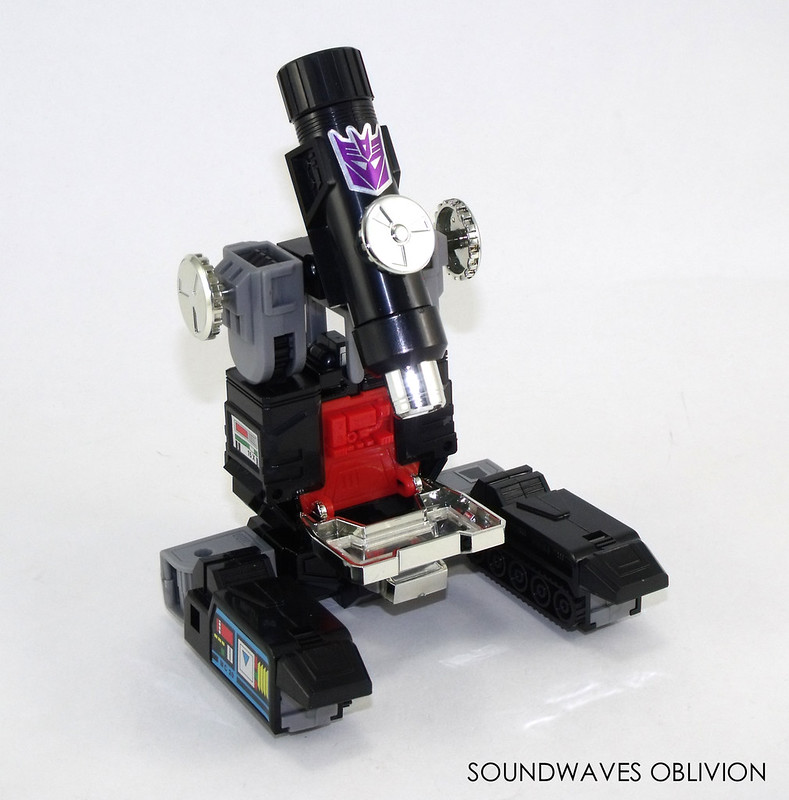 Released in 2005 as an e-Hobby.co.jp exclusive, Magnificus is a black redeco of Cybertron Perceptor who was also reissued in 2005 under the Transformers Collection series. Magnificus is based on the original Micro Change "Microscope Robo Microscope" released in 1984. Magnificus also came with a partner, Ga'Made who is a highly poseable Microman figure. I'm not sure whether this set was meant to commemorate both the Transformers and Microman series but it is a welcome addition nonetheless - 2004 was the 30th anniversary of Microman and 2005 was the 20th anniversary of Transformers (in Japan). 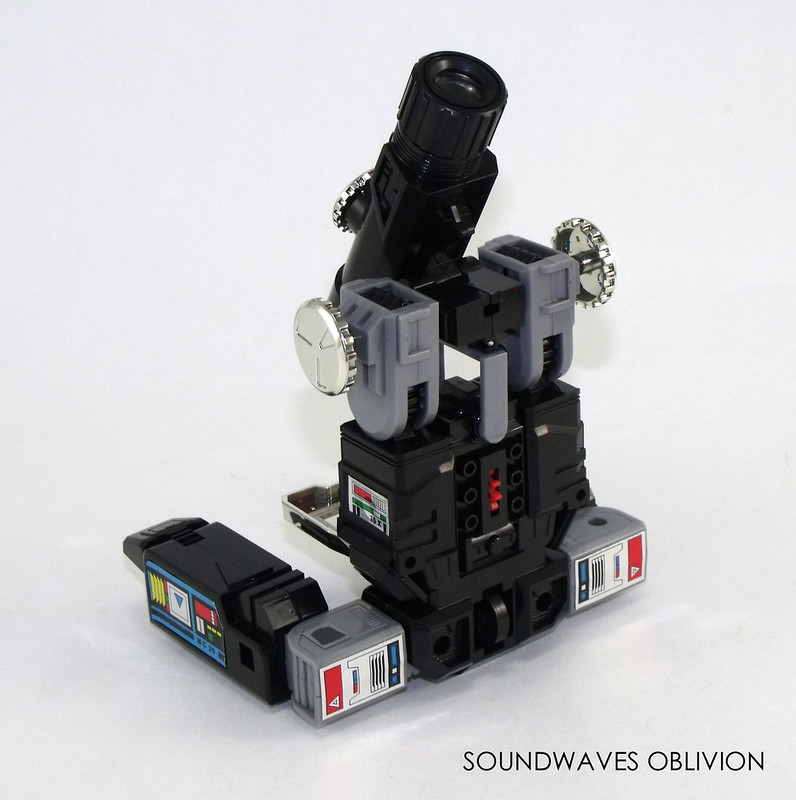 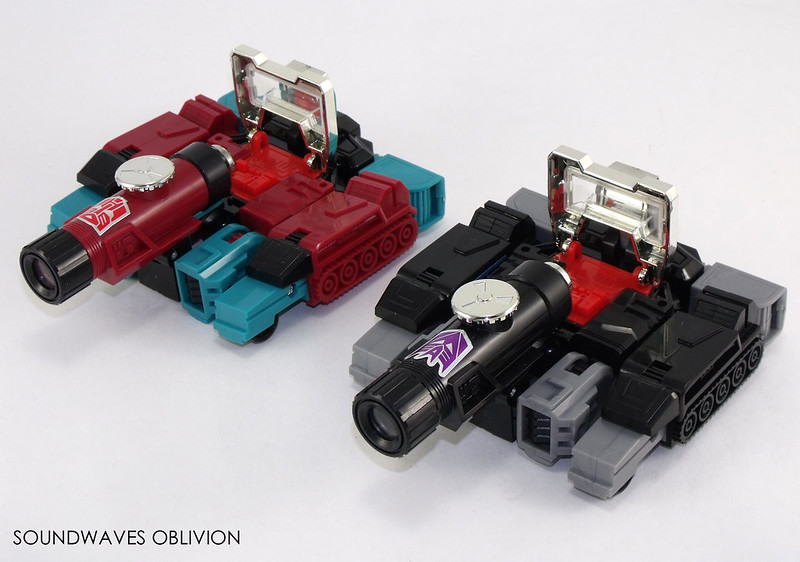 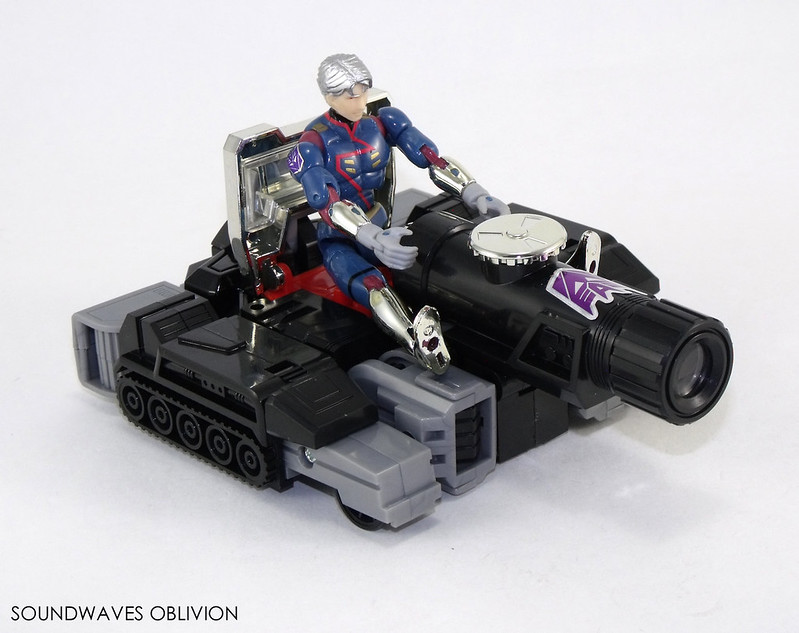 Like Perceptor, Magnificus is a working Microscope and can also transform into a tank which can interact with a Microman figure. 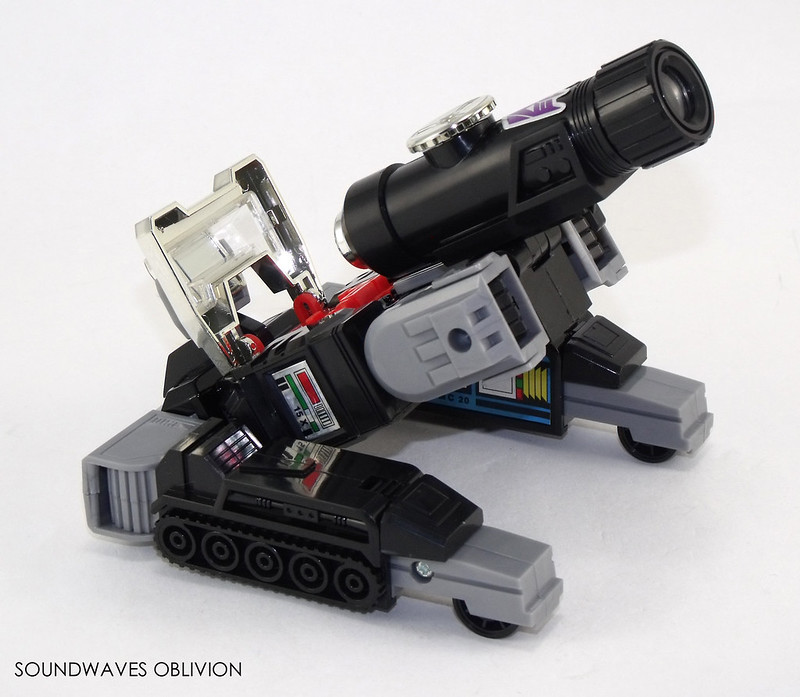 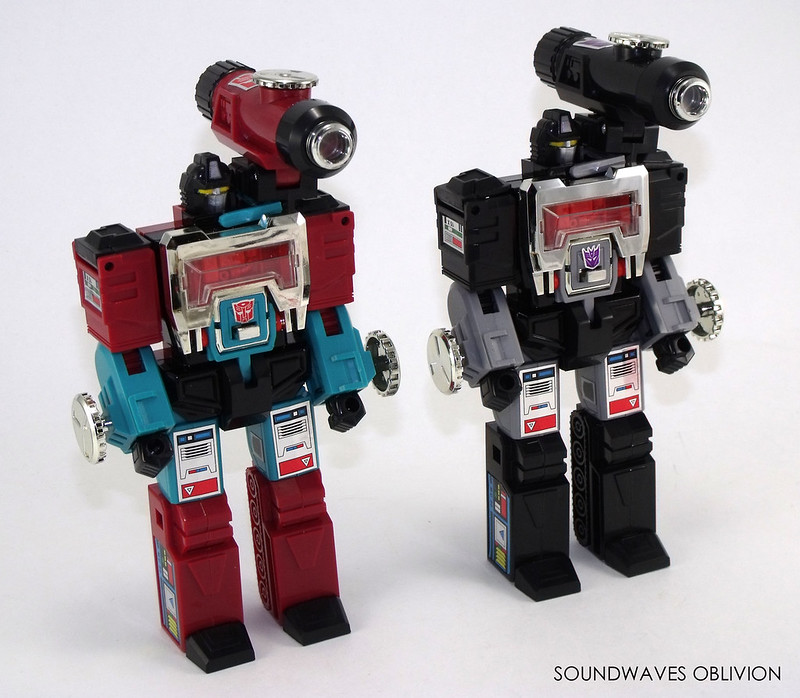 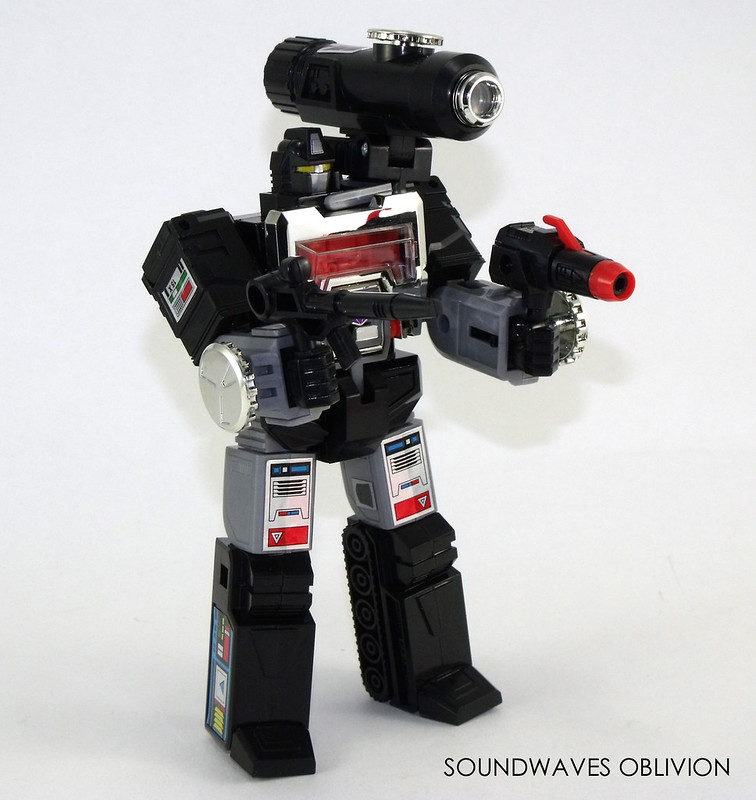 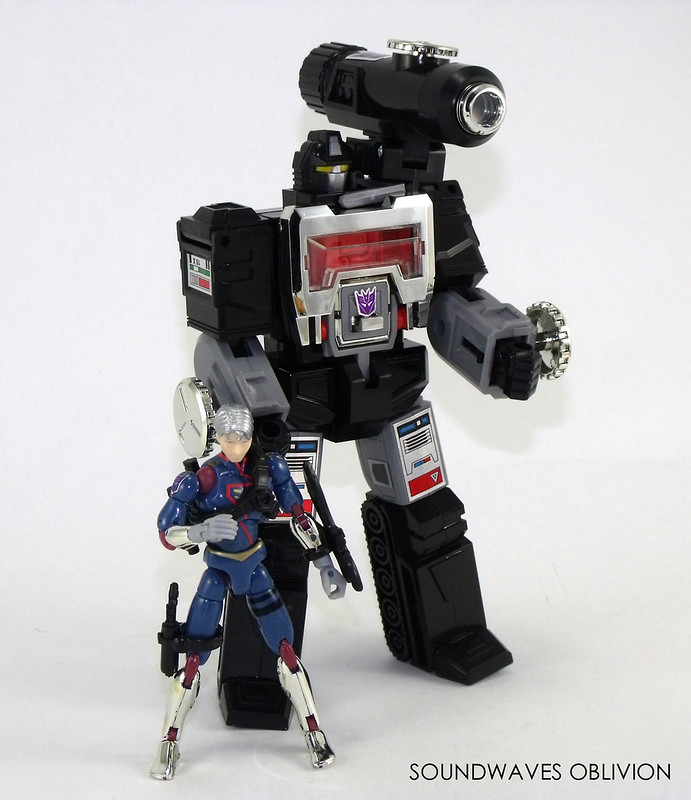 Ga'Mede is a repaint of a Microman figure released in 2004 during Micromans 30th Anniversary. Incidentally this anniversary was also celebrated in the Transformers series with the release of SL Grand Convoy & Kicker in the 2004 Super Link series. Ga'Mede's weapons however are black repaints of the weapons that came with the 2003 Microman Commander. Ga'Mede is named after a beautiful youth from a Greek myth, Ganymede, who was tending to a flock of sheep when Zeus carried him off to Mount Olympus to be his cup bearer. Hera, Zeus' wife, became jealous of Ganymede's beauty so Zeus put him in the sky as the constellation Aquarius. In 1610 the largest moon of Jupiter (Zeus' Roman name) was discovered by Galileo and the name Ganymede after the Greek myth was suggested by astronomer Simon Marius. 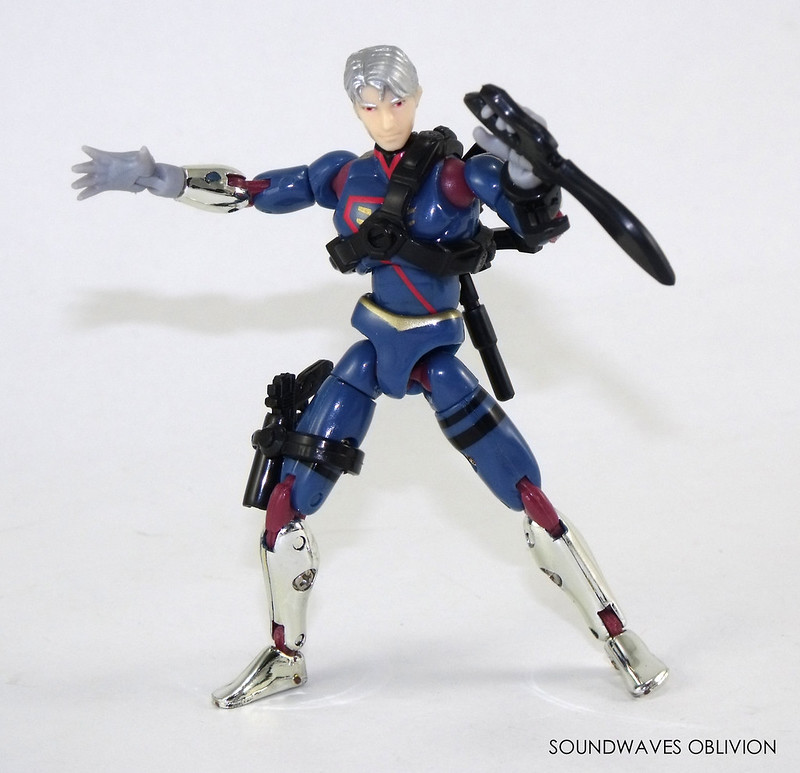 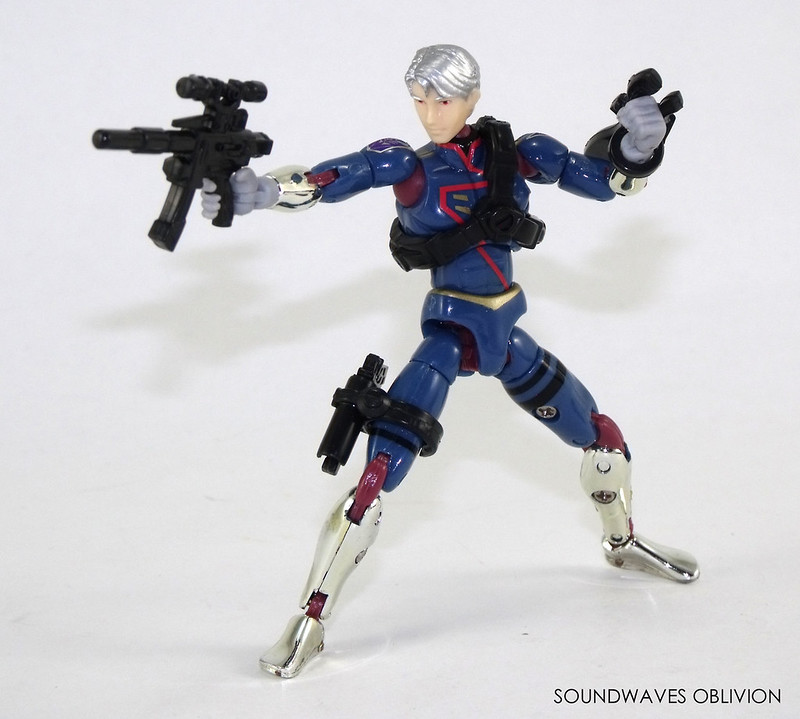 Ga'Mede is a combination of two previous Microman releases; the body is a repaint from the 2004 Microman series "Kiguru Microman". In the set KM-SP02 Megalon VS Jet Jaguar, Microman Walter (translucent blue body with chromed head) was repainted as Ga'Mede. Ga'Mede's weapons were from the "Microman 2003" series, released in 2003.  The figure MF1-01 Commander Microman came with a chromed chest harness, machine gun, machete with holster and a gun with holster. The Commander Microman was also re-released in exclusive colours as Commander Survive as a 2003 Wonder Festival exclusive limited to 1000 pieces. The accessories were chromed blue in this set. Magnificus, minus Ga'Mede was released in the Transformers Generations line, once again as an e-Hobby exclusive. This time around, Magnificus was a black repaint of the 2011 Reveal the Shield / Transformers United Perceptor. The face was resculpted to resemble the original Micro Change sculpt.

Overall if you are a G1 & Micro Change fan this set is worthwhile getting, however I've noticed that time has not been kind to my Ga'Mede figure as the chromed parts are turning yellow in colour which indicates poor quality chroming process so this many not be applicable to all Ga'Mede figures.

Extended Profile from e-Hobby.co.jp translated by Doug Dlin
Magnificus & Ga’Mede 68
Position: Outcast (Magnificus)
Function: Volunteer soldier (Ga'Mede)
Transformation: Battle Chariot, Tech Bay
Background: A crossover team of a former Destron military consul and a humanoid alien warrior. Kindred souls connected by bonds forged on the battlefield, they continue their war of vengeance on the Destron command staff who ensnared Magnificus. In this way, Magnificus hopes he may expunge the resentment he feels for the unjust tactics by which he was chased out of his position. Once the Military Consul for the Destron domain of Mebion, Magnificus was framed and convicted thanks to a crafty trap set by Destron command staff who were jealous of his position. He was ousted and sent to be a pit-fighting robot in a remote region of space. His partner Ga'Mede was a member of the royal family of Xeptos, a planet existing a subatomic inner space, but just as he was to be executed over a family dispute, he was rescued into the macroverse thanks to Magnificus' matter-enlarging scope. The two were bonded almost immediately by implicit trust owing to their similar circumstances, and have crossed numerous battlefields and parts of the underworld together. Their travels have gained them a suitable stock of wealth and armaments, with which they carry out a campaign of heartless revenge on the traitors who brought Magnificus low.
Weapons: Zero-Point Cannon, Ion Rifle, Spear Gun (Magnificus)
Weapons: Pulsar Rifle, Magno-Gun, High Frequency Machete (Ga'Mede)
STR: 10, INT: 10, SPD: 5, END: 10, RNK: 8, CRG: 10, FPR: 10, SKL: 10, TTL: 73 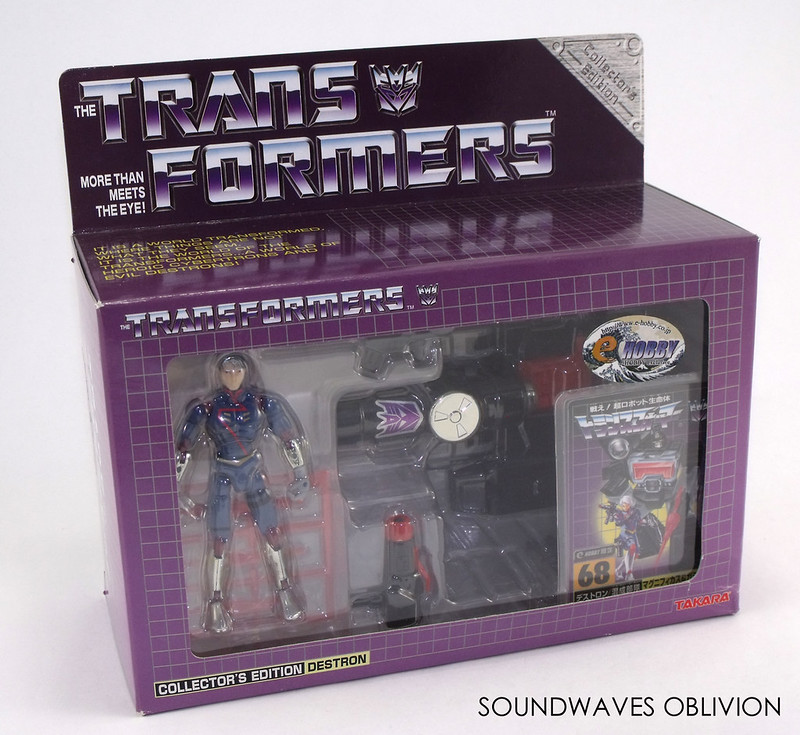 View the full gallery here on Flickr.
Posted by Jeremy Barlow at 09:46