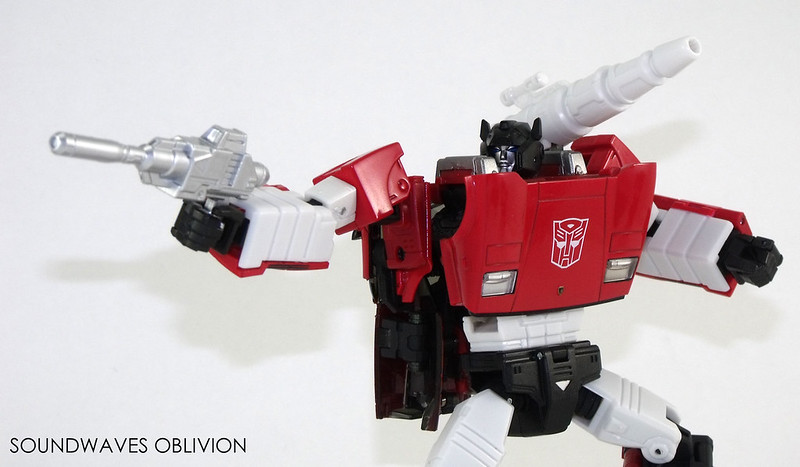 Profile (Translated from the Trading Card)
MP-12 Cybertron Warrior / Lambor
Function: Warrior
Motto: “I don't break rules, I bend them - a lot!"
Profile:
Lambor is a warrior with respect for justice and dedication to the mission. On the other hand he will take reckless action to ensure the mission is accomplished. He has the ability to transform into an Earthen Lamborghini Countach LP500S. Capable of aerial combat allowing him to fight head to head with the Jetrons. Quite often as a result of his careless behaviour he is under the care of the medic, Ratchet.
STR:6; INT:7; SPD:7; END:7; RNK:5; CRG:10; FBL:3; SKL:6 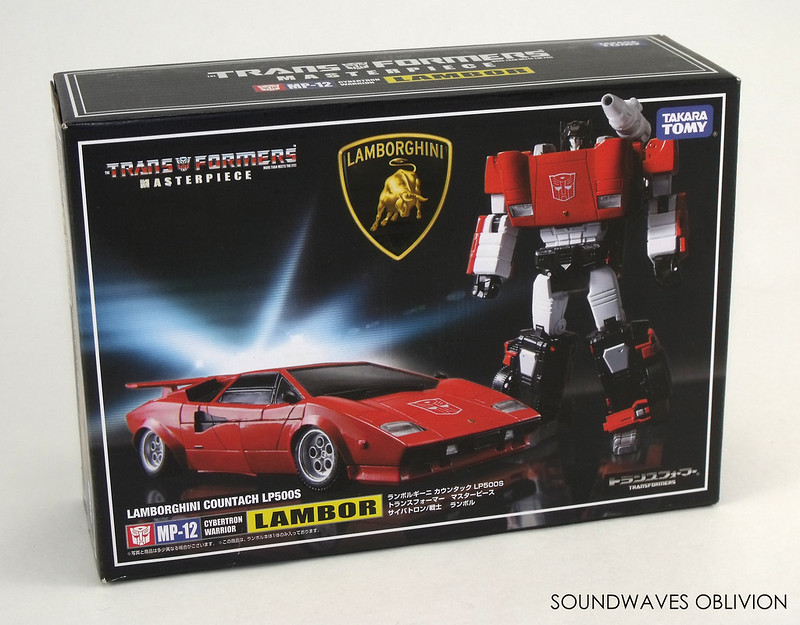 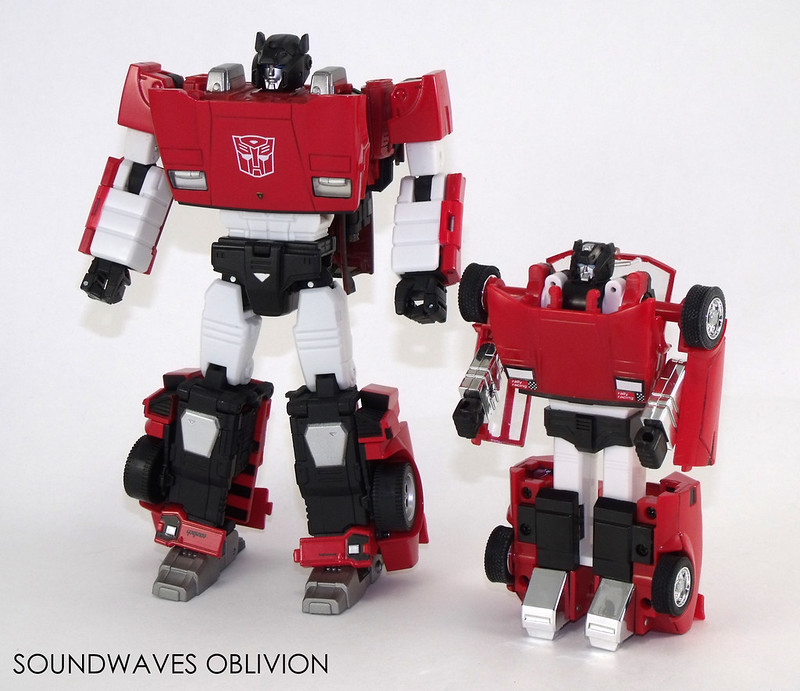 MP-10 Convoy may have been the figure at the start of the soft reboot of the Masterpiece line, but MP-12 Lambor / Sideswipe cemented it. Lambor was released at a cheaper price point (6000 Yen), no die-cast or rubber tires included but this was an accurate representation of the Lamborghini Countach LP500S with a smooth, straightforward transformation to a highly poseable robot mode which itself is an updated version of the original Diaclone / G1 toy and the 1984 animated model. 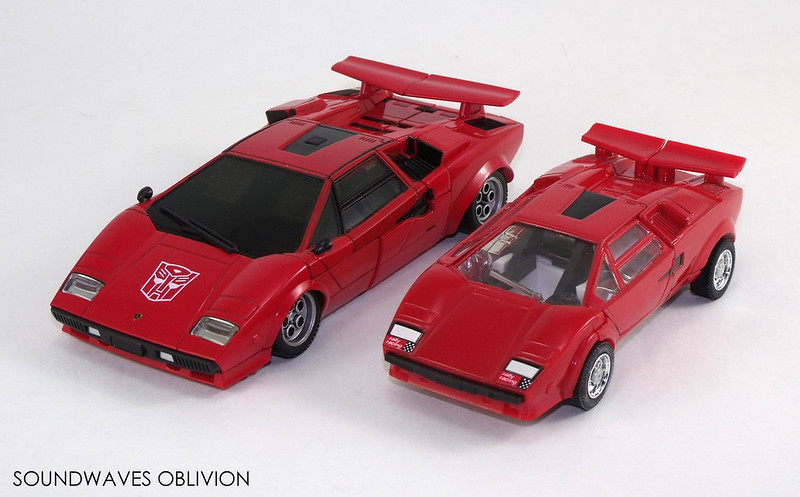 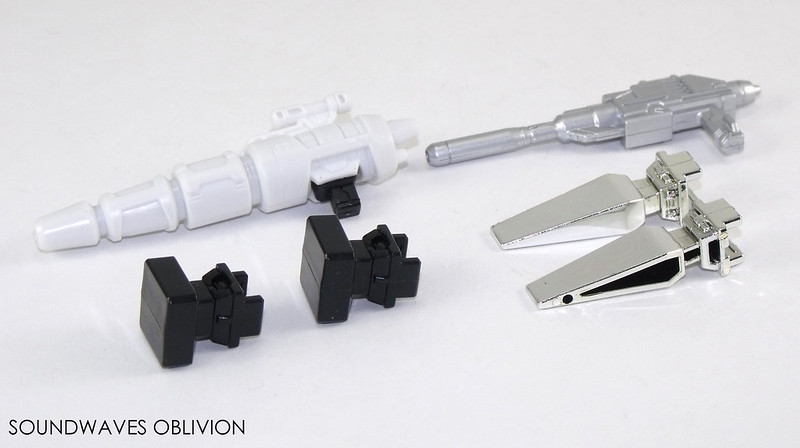 Lambor comes with several accessories, a missile launcher which does not actually fire anything, flare gun and a pair of pile drivers which were used in the 1984 animated episode "A Plague of Insecticons". The missile launcher and flare gun also combine together and can slot into a port on the roof of the vehicle mode. When ordered through Amazon.jp, Lambor came with an additional pair of chromed pile drivers as seen in the 1985 animated episode "Dinobot Island Part 2".

Lambor has been re-released several times; as well as the initial Japanese version and Hasbro Asia's version (with the collectors coin), in 2013 both Lambor and Alert were also available in South Korea but packaged in robot mode.

In 2014 between August 9th and August 17th at the Transformers Expo in Yokohama City, Japan, Lambor was reissued without the prominent Cybertron / Autobot logo on his chest. The box also had a foil sticker indicating it as an exclusive.


Lambor was reissued once more in Japan in February 2015 and in Asia in September 2015 which came with a completely different collectors coin.


Lambor was also made available to Australia at the end of 2015 as well. At the time of writing Lambor is set to be made available once again albeit in the cartoon variant colours as MP-12+ Anime Color Edition. As well as the different colours, this version will also come with additional Pile Drivers that came with MP-14C Clampdown. 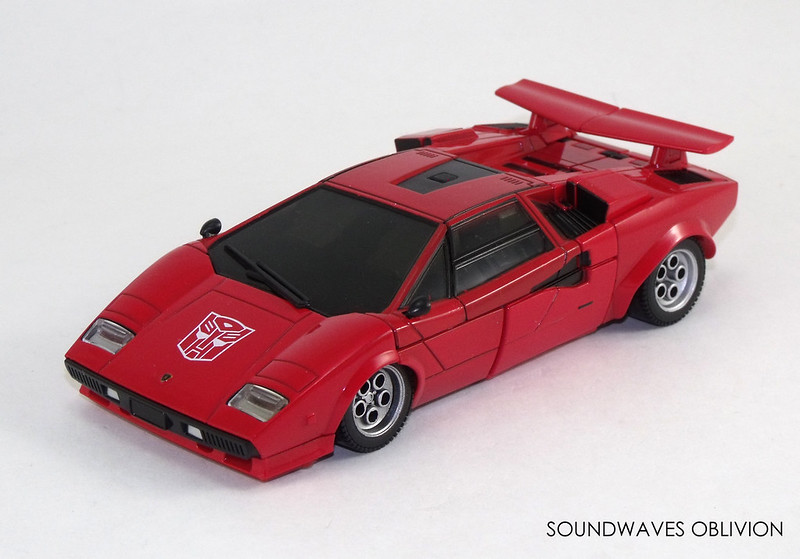 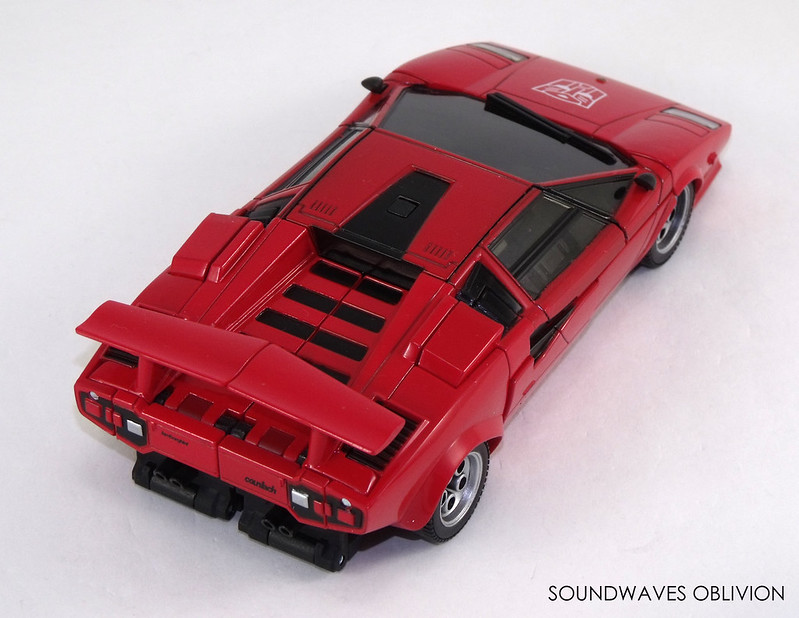 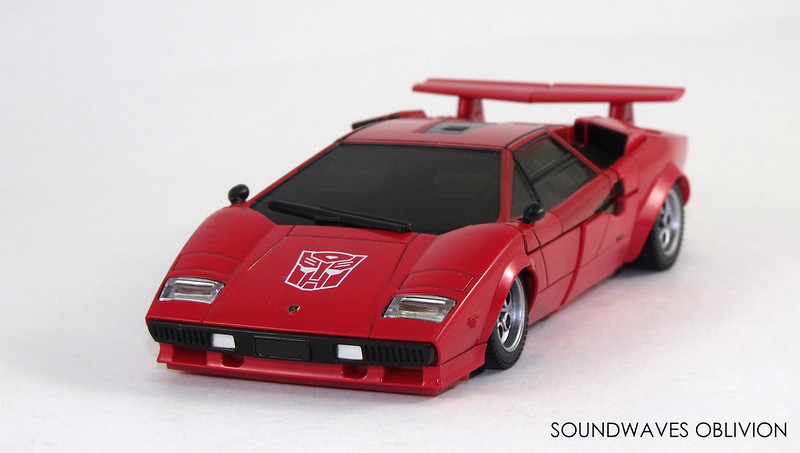 Vehicle Mode: Lamborghini Countach LP500S (Translated from the instruction pamphlet)
The Lamborghini Countach LP500S is Lambors vehicle mode. It’s safe to say the bright red vehicle mode embodies his passionate and vibrant nature, a particularly stylish appearance out of the Cybertron warriors who transform into cars. However contrary to his immaculate appearance, characteristically, Lambors driving is rough and he can’t stand scratches on his body. His twin brother Sunstreaker also transforms into a Countach, although they have very different personalities, he too hates getting scratches on his body. In emergency situations he heads directly to the scene with Commander Convoy to support him. While he doesn’t lead the advance, he sometimes acts as commander directing his fellow Cybertrons. In the overseas version developed in America, the character's name is Sideswipe meaning “a side on collision”. When released domestically in Japan in 1985, he was named Lambor, inspired from “Lamborghini” the manufacturer of the Countach LP500S, a more memorable character for the Japanese audience. 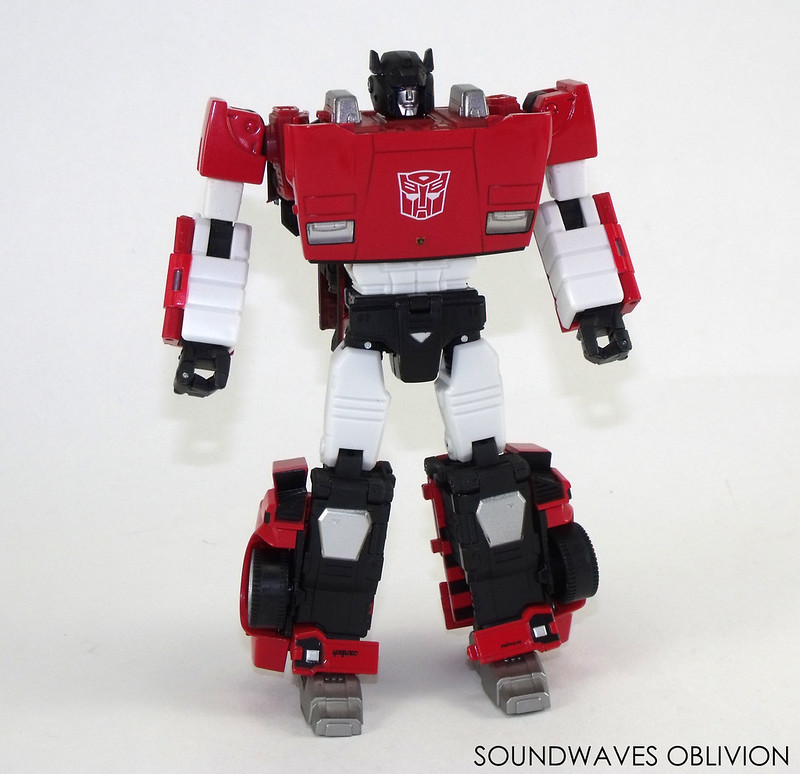 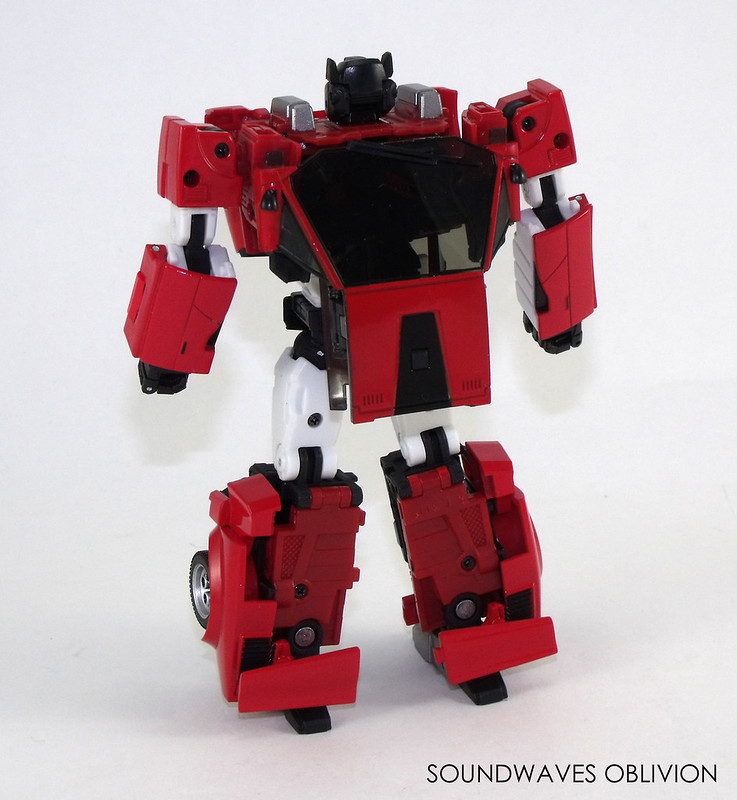 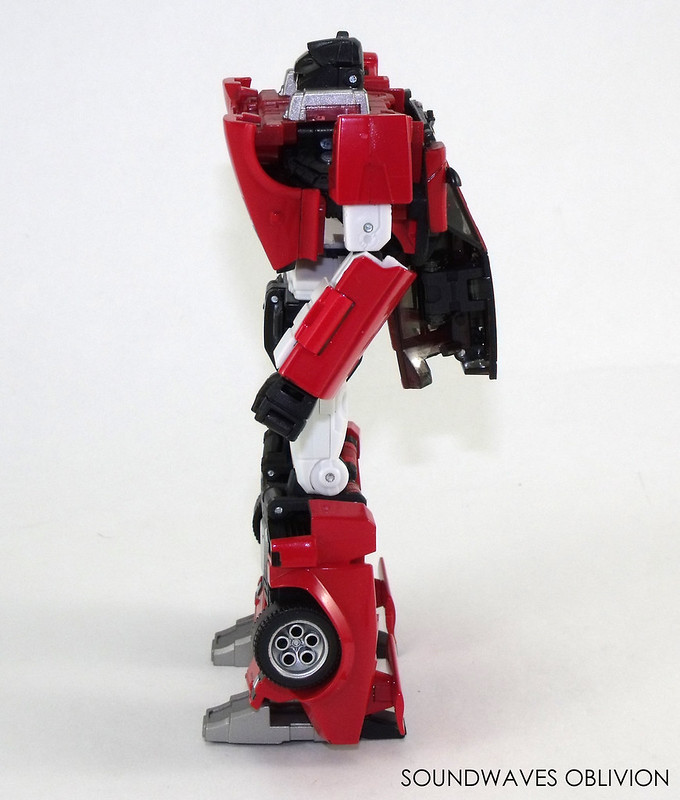 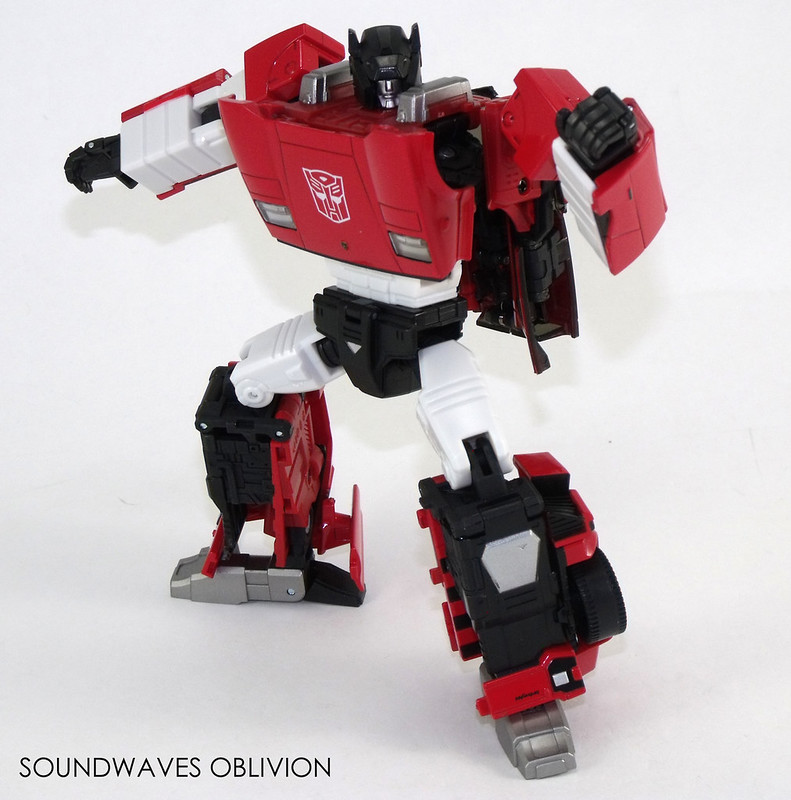 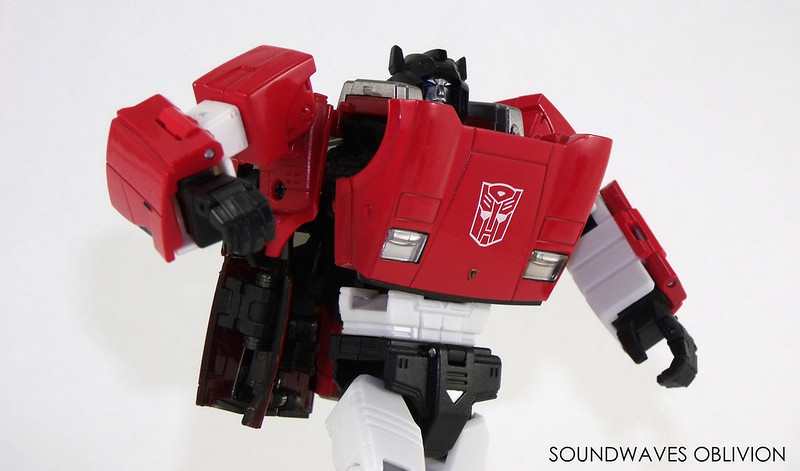 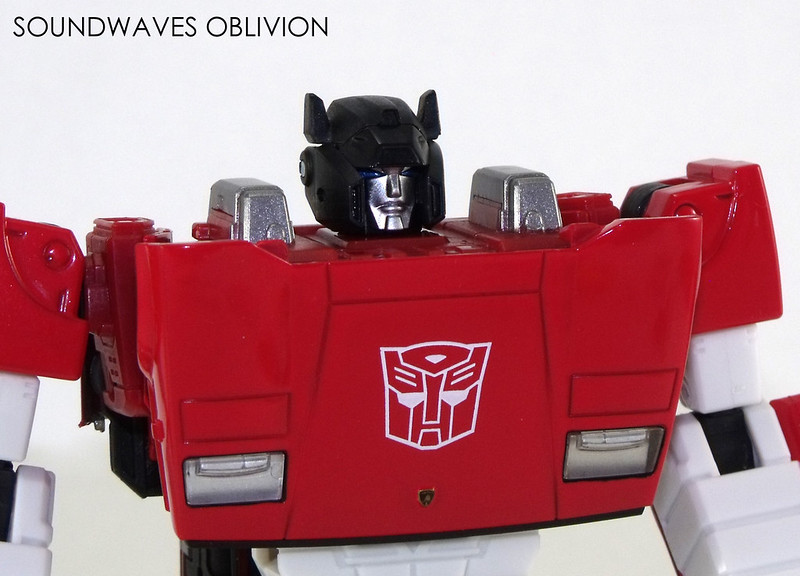 Robot Mode: Lambor (Translated from the instruction pamphlet)
Function: Warrior
Motto: “I don’t break rules, I bend them - a lot!”
Profile:
Lambor has a bold and impulsive character who acts first and thinks later. A natural warrior, fearless of pain he will speed to the frontline. Has exceptional strength amongst the Cybertron warriors and by transforming his arms into pile drivers he can crush rocks. Although a good warrior, because of his strength and destructive power he is often side-lined to work on civil engineering duties. He is also capable of high speed flight, one of the few Cybertrons who can take on the Destron warriors who specialise in aerial attacks. Sometimes able to disperse Destron forces by pretending to attack Starscream, the Destrons main aerial power. During tactical manoeuvres he frequently teams with his twin brother Sunstreaker who transforms into a yellow Countach. Their combination puts the Jetrons in a predicament when they utilise their aerial slaughter method. His reckless nature however often leaves him injured and constantly under the care of the medic, Ratchet. 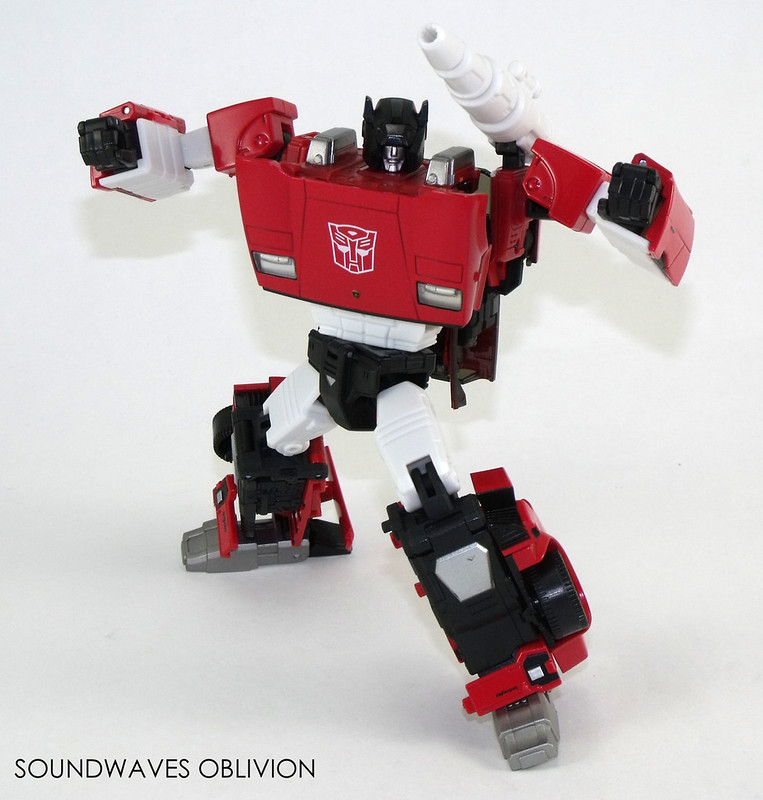 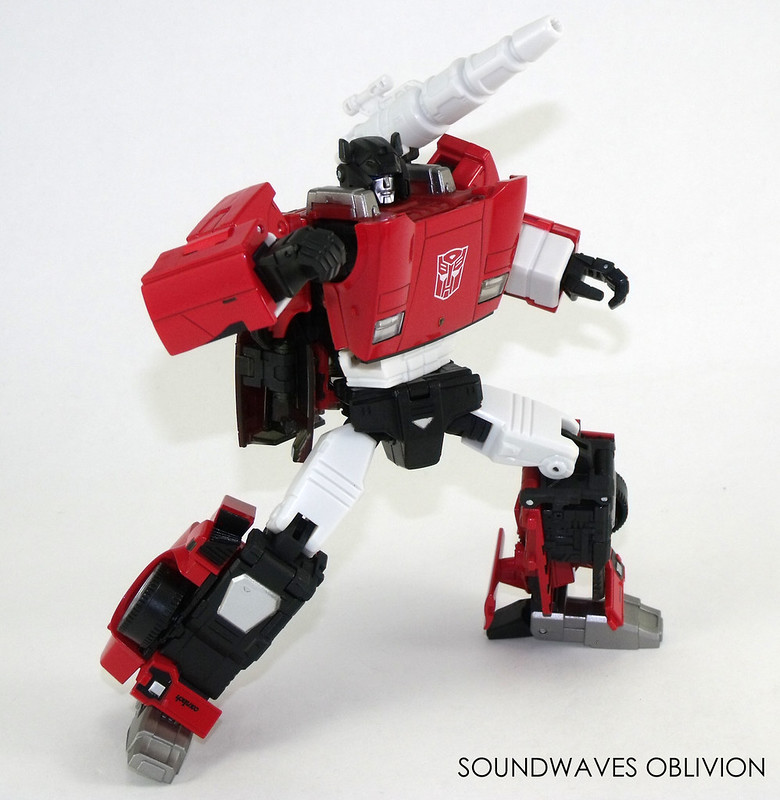 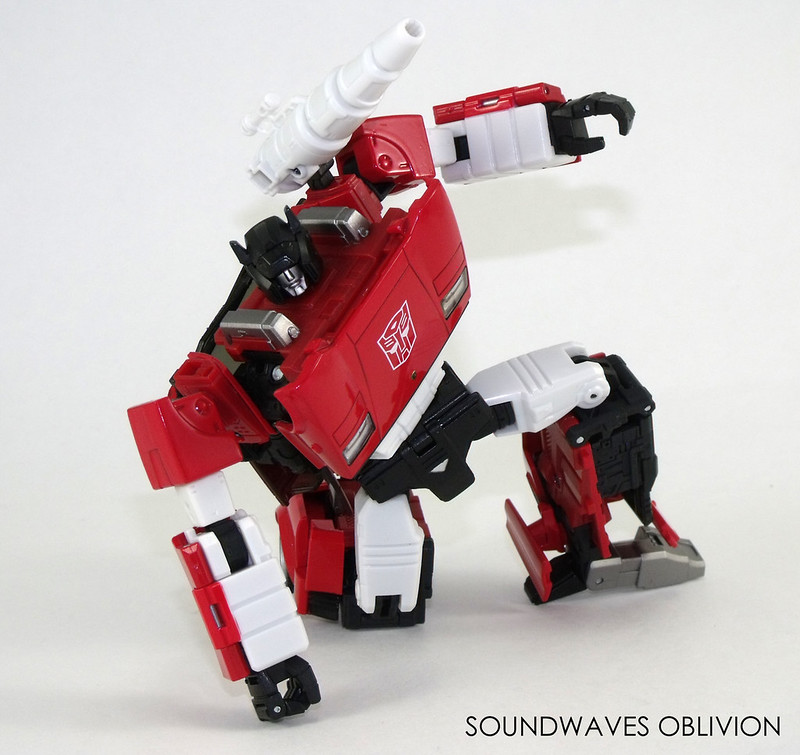 Weapon: Missile Launcher (Translated from the instruction pamphlet)
A large launcher equipped on Lambors left shoulder. Normally equipped with flares for aerial battle at night but by changing the mounting at the tip he can fire a variety of items such as live ammunition, lasers and a flamethrower. 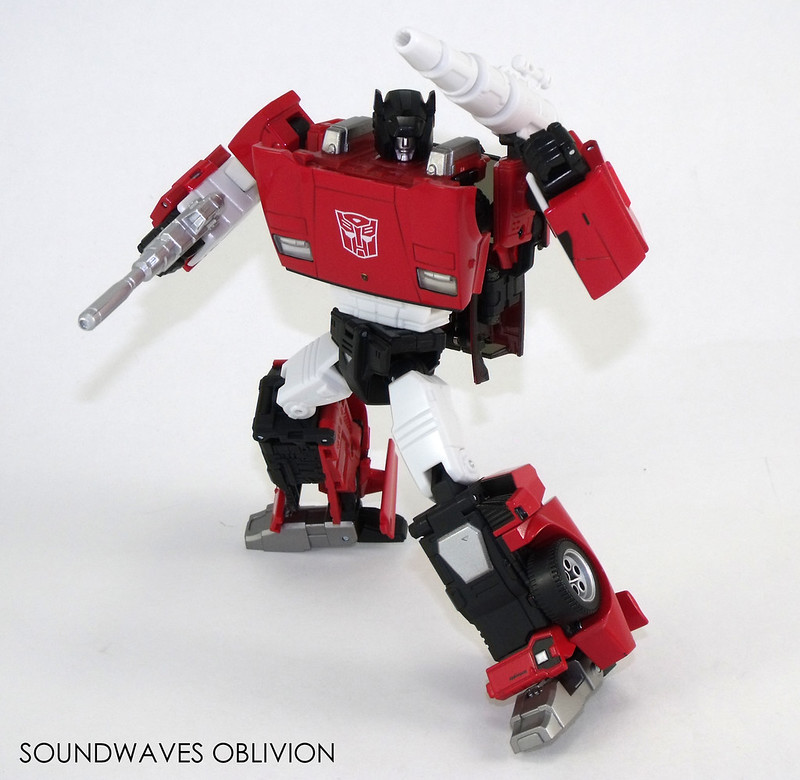 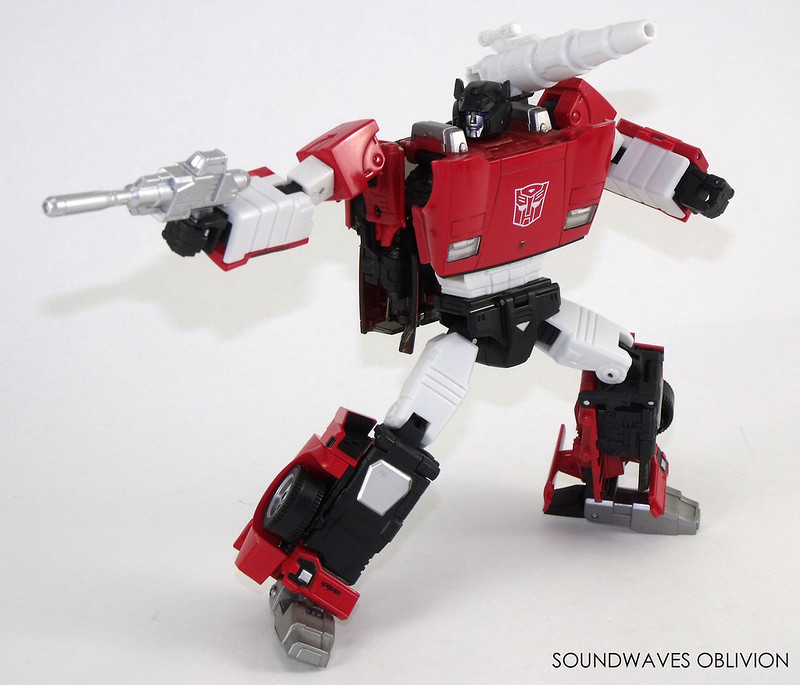 Weapon: Flare Gun (Translated from the instruction pamphlet)
The Flare Gun is Lambors favourite weapon. As well as being able to throw fire, he can also use it as a laser weapon against the Destrons. In episode 7 of the original cartoon “Birth of the Dinobots,” Wheeljack uses this flare gun to cut through the Energon chains which were holding Convoy prisoner. 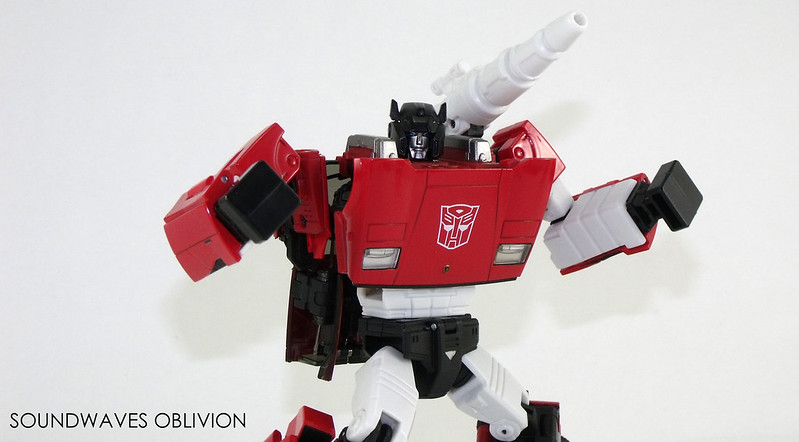 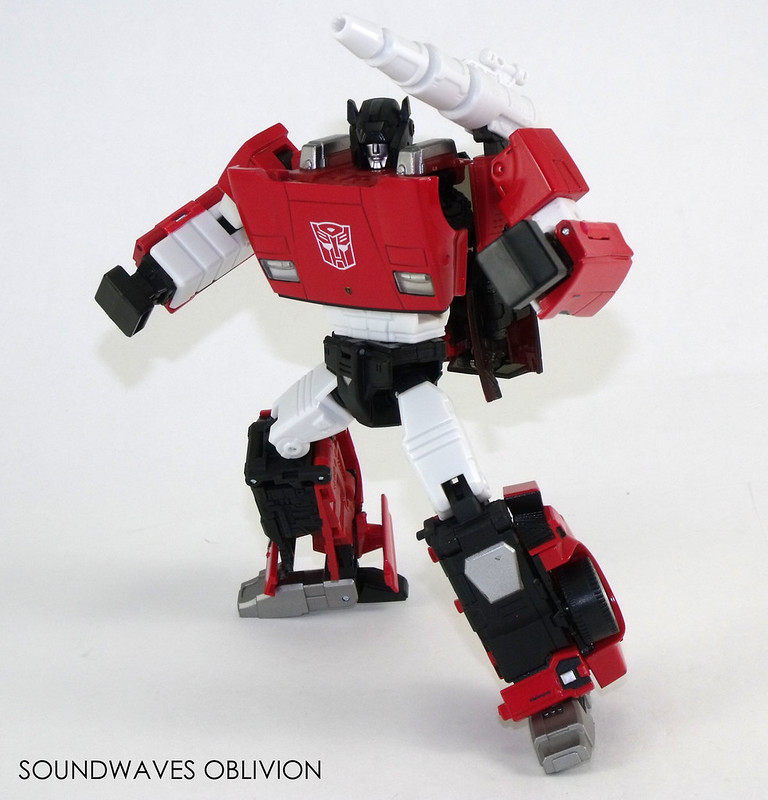 Weapon: Pile Driver (Translated from the instruction pamphlet)
Similar to the other Cybertron warriors, Lambors arms can transform into several weapons. The Pile Drivers were first used to dig out rock in the 59th episode of the cartoon “The Mystery of the Insectrons”. They exert 3.6t of force up to 5 shots a second, additionally very effective at close combat and breaking through fortifications. 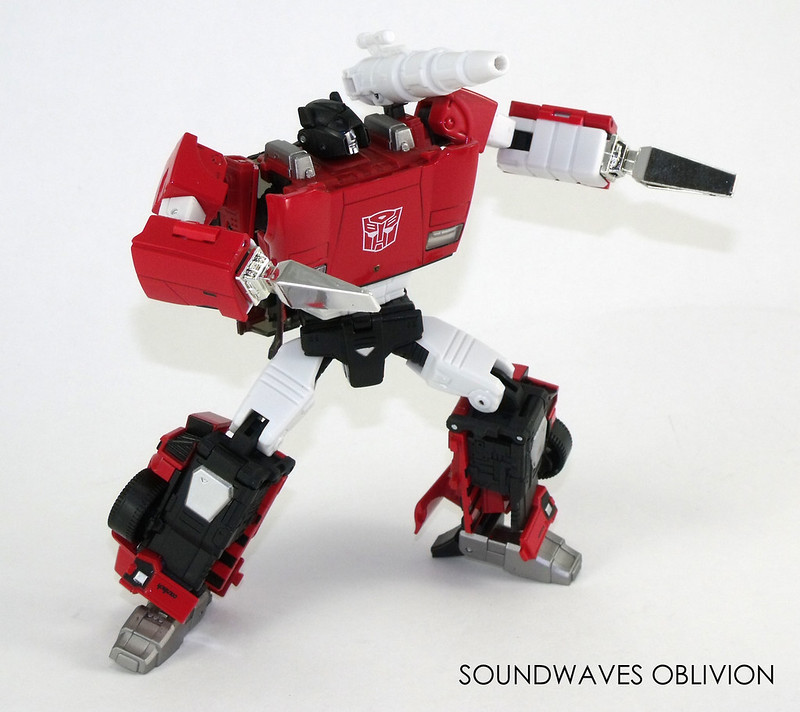 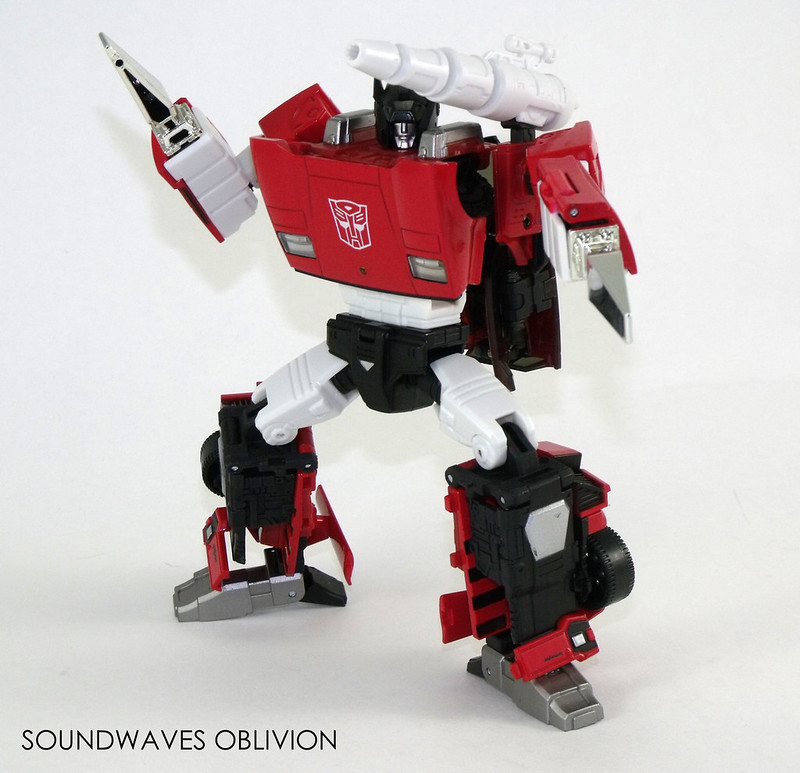