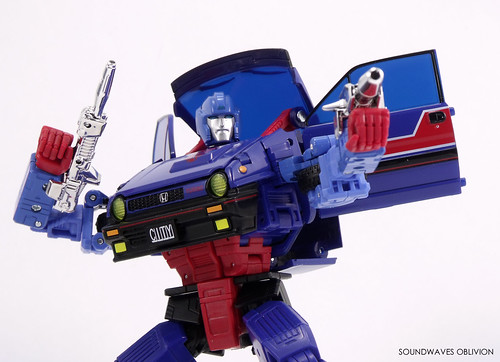 Profile (Translated from the Character Card)
MP-53 Cybertron Warrior Skids
Function: Warrior
Motto: "Deep down, we are more like than unlike humans."
Profile:
Skids is a thoughtful warrior who would rather ponder over Earthen lifeforms instead of fighting. He is usually immersed in theoretical research at Cybertron Base. His main weapon is a Liquid Nitrogen Rifle which has a range of 600 feet. His Twin Electron Blasters can generate a charge of 20,000 volts. Has the ability to decelerate to a stop within 25 feet of an object after travelling 560 miles.
STR...4; INT...9; SPD...5; END...6; RNK...8; CRG...7; FBL...7; SKL...7 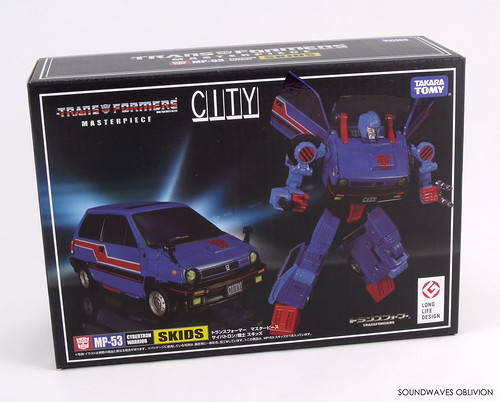 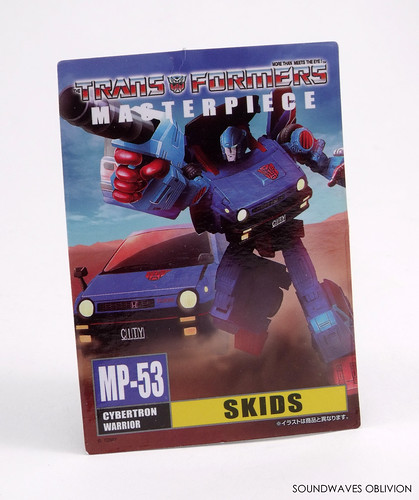 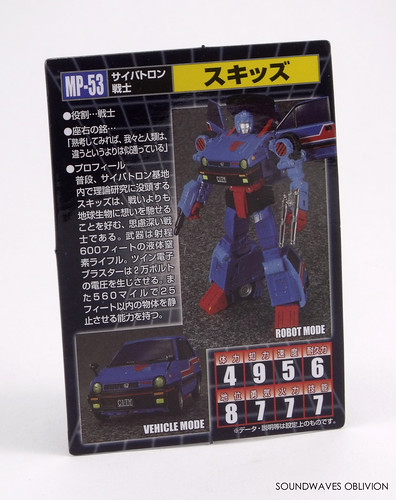 MP-53 Skids was released at the end of November 2021 alongside MP-54 Reboost. Skids was first revealed in a series of two "tweets" by Takara Tomy on their Twitter account on the 1st January 2021. Skids was pictured as a line CAD drawing until photographs of the grey prototype were unveiled in a "tweet" from Honda on their Twitter account on the 25th February 2021 which promoted issue 277 of Figure King magazine. 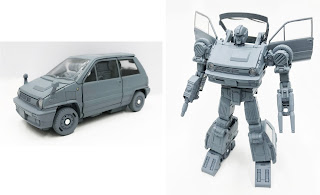 Figure King issue 278 was released on the 26th March 2021 and featured the first colour mock up of Skids as well as the reveal of MP-54 Reboost. The magazine also featured an interview with Kojin Ono on the design of Masterpiece Skids. The interview confirmed that Takara Tomy are taking a new direction with the Masterpiece toyline taking a "hybrid" approach with the design. The reasoning for this is to have a more simplistic transformation, realistic vehicle modes and keeping costs low. 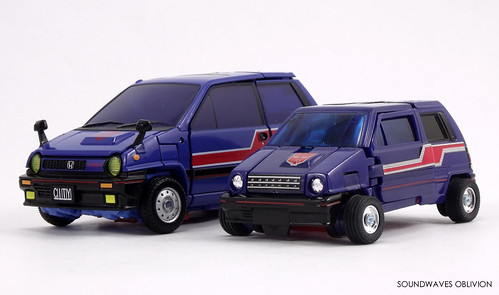 Takara Tomy worked with Honda to design the updated MP-53 Skids and MP-54 Reboost in order to commemorate the 40th Anniversary of the Honda City. Skids transforms into a very realistic version of the City which could be mistaken for a scale model. The Sunbow cartoon model was much more simplified and could be easily mistaken for a van rather than a compact car. In the Marvel Comics, Skids was also presented as a van rather than a small car. 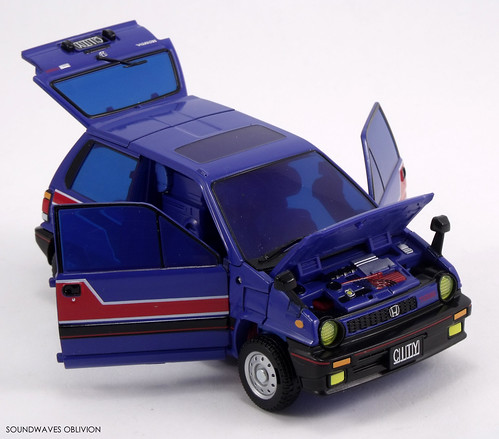 Skids only appeared as a background character and very briefly in two episodes, "Quest for Survival" and "Triple Takeover". The lack of character development may have been down to the toys availability with Skids getting a release in December 1984 and getting short packed in 1985. In Japan, Skids was only available in the VSZ set alongside Buzzsaw and Sunstreaker. 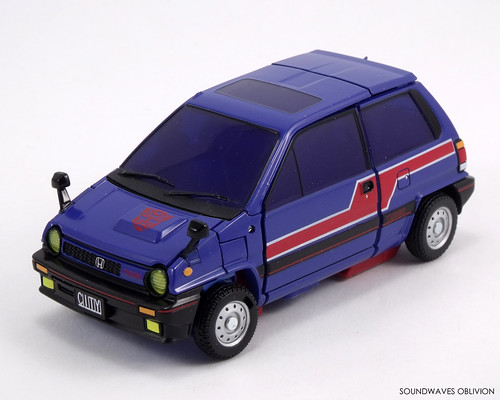 In his vehicle mode Skids is a deep glossy blue. The bonnet opens to reveal the engine and this is not part of the transformation so it is nice that this effort was included. The doors and rear boot opens as well. Unlike Reboost Skids does not come with a Motocompo a decision made as the original Transformer also omitted this accessory. Instead you can fit Skids accessories inside. 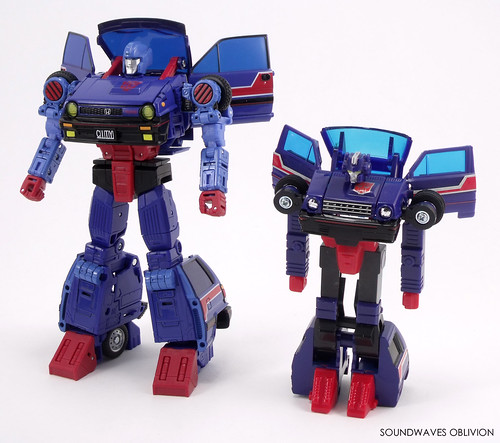 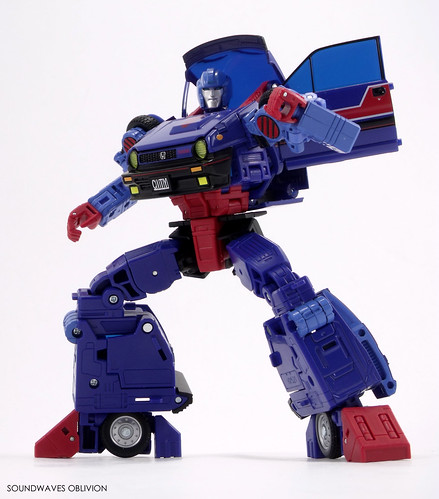 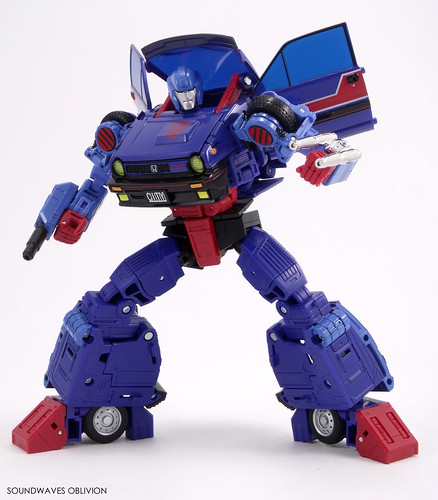 Skids has a decent range of articulation, not as much as previous and more expensive Cybertron cars but as Takara Tomy are keeping the parts count down, the end result is still a decent effort. Skids is a fantastic figure and a welcome addition to the Masterpiece range. It will be an interesting wait to see where Takara Tomy are taking the Masterpiece line forward, although they are pushing ahead with cheaper "hybrid" Masterpieces, they are still releasing cartoon accurate figures such as the recent Seekers as well as upcoming figures, Cliffjumper and Skyfire. 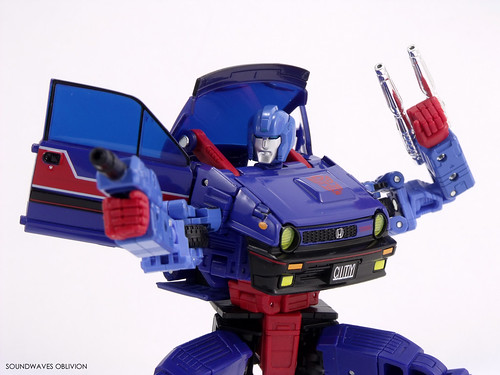 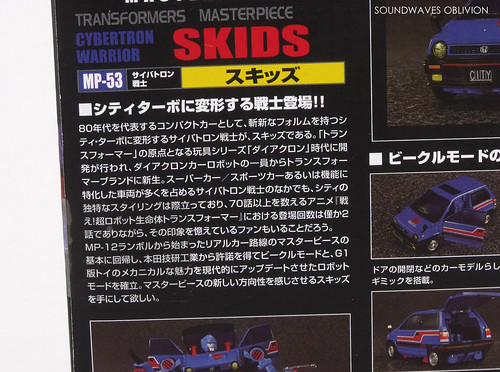 ■ Introducing the warrior who transforms into a City Turbo!! (Translated from the back of the box)
Cybertron Warrior Skids transforms into the innovative City Turbo, the iconic 80’s compact car. Developed during the Diaclone era (the series that would later become the Transformers), this Diaclone Car Robot would be reborn under the Transformer brand. As many of the Cybertrons transformed into supercars, sports cars and functional cars, the City’s unique design certainly stands out. He only appeared twice in the cartoon “Fight! Super Robot Lifeform Transformer” which had over 70 episodes, but Skids left a lasting impression on many fans. With a back to basics approach focusing on realistic cars which was established with Masterpiece MP-12 Lambor, we have created a vehicle mode with permission from Honda Company Co.,Ltd and a robot mode which has updated the mechanical charm of the original G1 version. We hope that Skids will make you anticipate the new direction of the Masterpiece series. 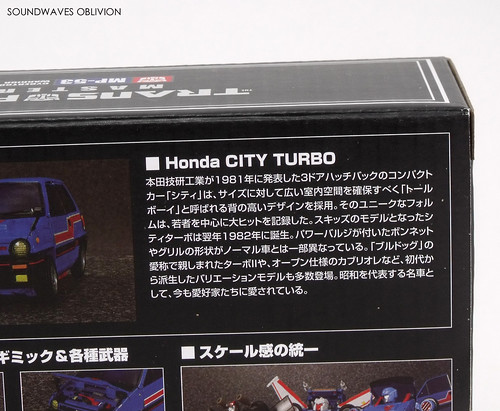 ■ Honda City Turbo (Translated from the back of the box)
The “City” is a 3 door hatchback compact car announced by Honda Company Co.,Ltd in 1981. It adopted a “Tall Boy” design to accommodate a large interior space. Its unique design was a massive hit, especially amongst the younger generation. The City Turbo which was released the following year in 1982 became the car model for Skids. The newer model incorporated a different shaped grill and bonnet with a power bulge. Many other variations derived from the initial car model such as the Turbo II, nicknamed the “Bulldog” and the convertible Cabriolet. This famous car representing the Shōwa era has many admirers. 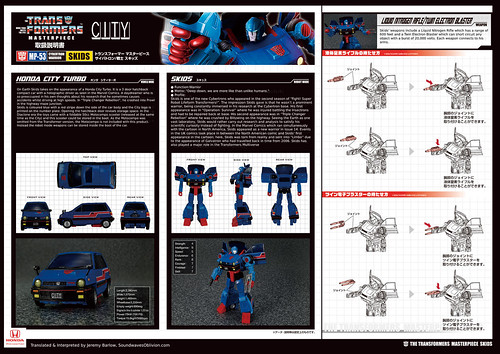 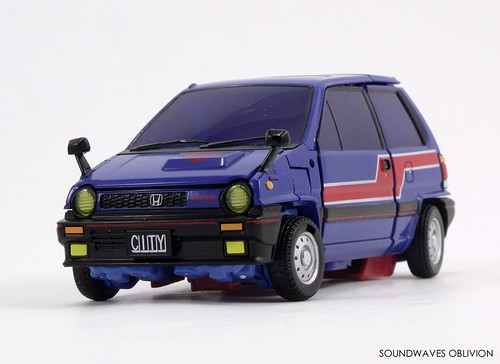 Vehicle Mode: Honda City Turbo  (Translated from the instruction pamphlet)
On Earth Skids takes on the appearance of a Honda City Turbo. It is a 3 door hatchback compact car with a holographic driver as seen in the Marvel Comics. A daydreamer who is so preoccupied in his own thoughts about his research that he sometimes causes accidents whilst driving at high speeds. In “Triple Changer Rebellion”, he crashed into Prowl in the highway maze junction. Skids is coloured blue with a red stripe down the side of the car body and the City logo is printed on the number plate. Opening the hatchback door reveals storage space. In the Diaclone era the toys came with a foldable 50cc Motocompo scooter (released at the same time as the City) and this scooter could be stored in the boot. As the Motocompo was omitted from the Transformer version, the Motocompo is not included with this product. Instead the robot mode weapons can be stored inside the boot of the car. 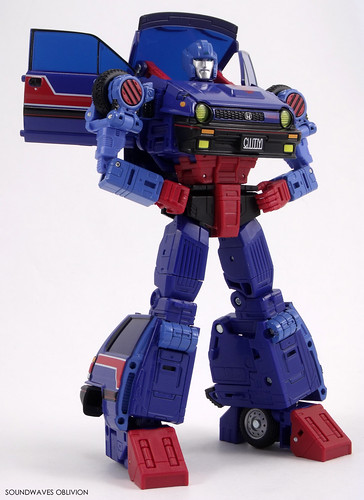 Robot Mode: Skids  (Translated from the instruction pamphlet)
● Function:Warrior
● Motto: "Deep down, we are more like than unlike humans."
● Profile:
Skids is one of the new Cybertrons who appeared in the second season of “Fight! Super Robot Lifeform Transformers!”. The impression Skids gave is that he wasn’t a prominent warrior, being constantly immersed in his research at the Cybertron base. His first appearance was in “Operation: Survival” where he was injured battling the Insectrons and had to be repaired back at base. His second appearance was in “Triple Changer Rebellion” where he was crushed by Blitzwing on the highway. Seeing the Earth as one vast laboratory, Skids would rather carry out research and analysis to satisfy his scientific curiosity instead of fighting. In the Marvel Comics which ran simultaneously with the cartoon in North America, Skids appeared as a new warrior in issue 14. Events in the UK comics took place in between the North American comic and Skids’ first appearance in the cartoon; here, Skids was torn from reality and sent into “Limbo'' due to the appearance of Galvatron who had travelled back in time from 2006. Skids has also played a major role in the Transformers Multiverse. 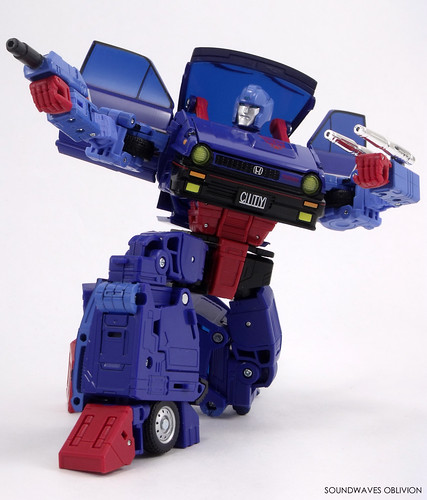