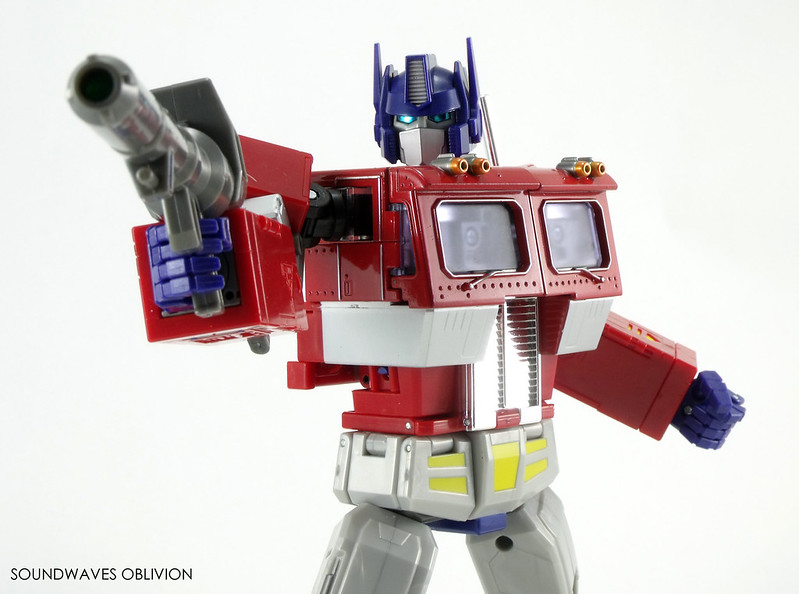 Profile (Translated from the Trading Card)

MP-1 Cybertron General Commander Convoy
Function: Cybertron General Commander
Motto: "Freedom is the right of all sentient beings."
Profile:
Has taken it upon himself to protect all life forms including those on Earth; constantly fighting to defeat the Destrons. Can separate into 3 self-contained modules. Convoy can function without the other 2 modules however they will cease to function if Convoy is inactive.
STR...10; INT...10; SPD...8; END...10; RNK...10; CRG...10; FPR...8; SKL...10 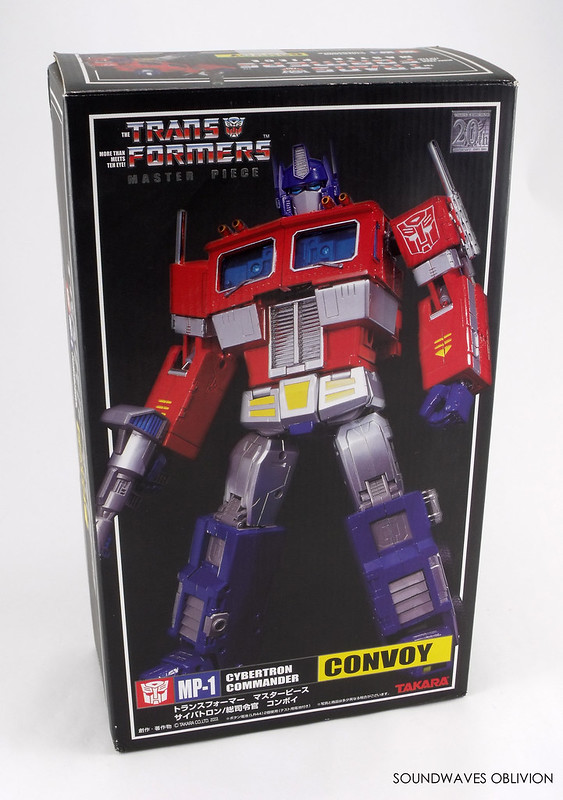 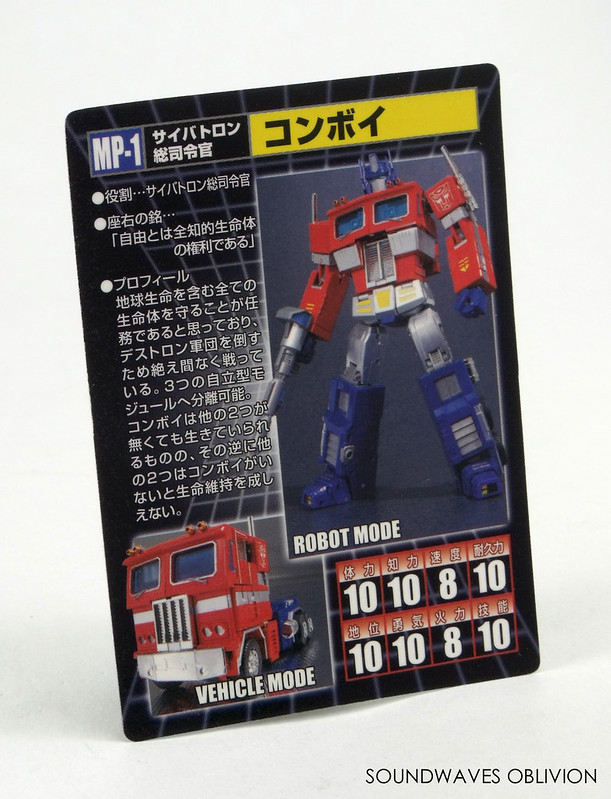 MP-1 Convoy was the figure that started off the Masterpiece line and was initially only intended to be a one off to celebrate the Transformers 20th Anniversary. It had been teased by Hasbro that a special figure was in development for the anniversary and we first caught a glimpse thanks to photographs taken at a toy event in Japan. As well as revealing BT-01 Smokescreen from the Binaltech line, there were also photographs of a resin prototype Convoy / Optimus Prime. This photograph revealed all accessories var the energy axe. The information card in front of the figure simply states "Transformers Masterpiece Convoy (Scheduled release in December)". There was speculation at the time as to whether the figure would come with a trailer.

In November 2003 a feature in Dengeki Hobby magazine revealed the figure in full colour as well as showing the figure would come with a cardboard trailer. This magazine also featured a full page advertisement for Masterpiece Convoy.

Released on the 13th December for 9,800 Yen, Convoy comes packaged in robot mode in a plastic tray secured with a large number of twist ties. The plastic tray sits inside a cardboard tray, and it is this tray that will turn into the accompanying trailer. As well as the size of the robot mode, standing around 12 inches tall, the main thing you notice with this figure is the weight. This thing is heavy, which back in 2003 was a good thing as we had seen a decline in diecast metal but in hindsight MP-1 Convoy uses far too much. 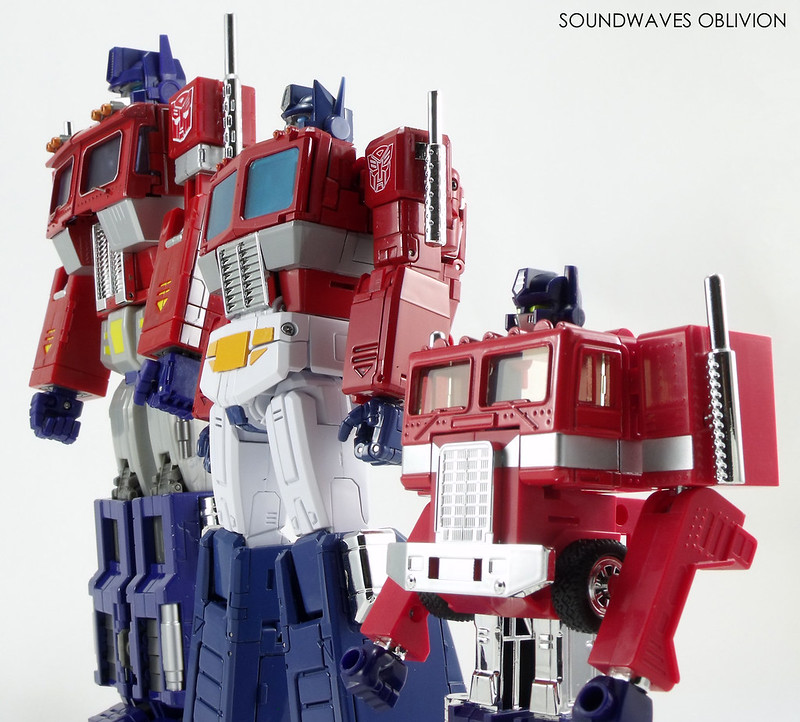 There has been some criticism against the way the current Masterpiece series is focusing to much at replicating the original cartoon designs however this first Masterpiece figure was designed with the cartoon version in mind which is explicitly stated within the accompanying booklet. The robot mode is a cross between the animation model and the original G1 figure and this think is packed with gimmicks. 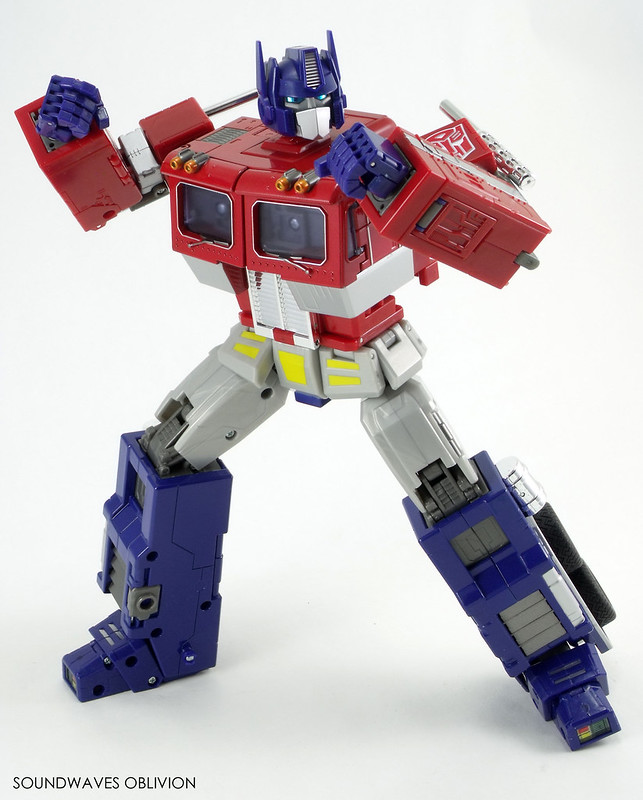 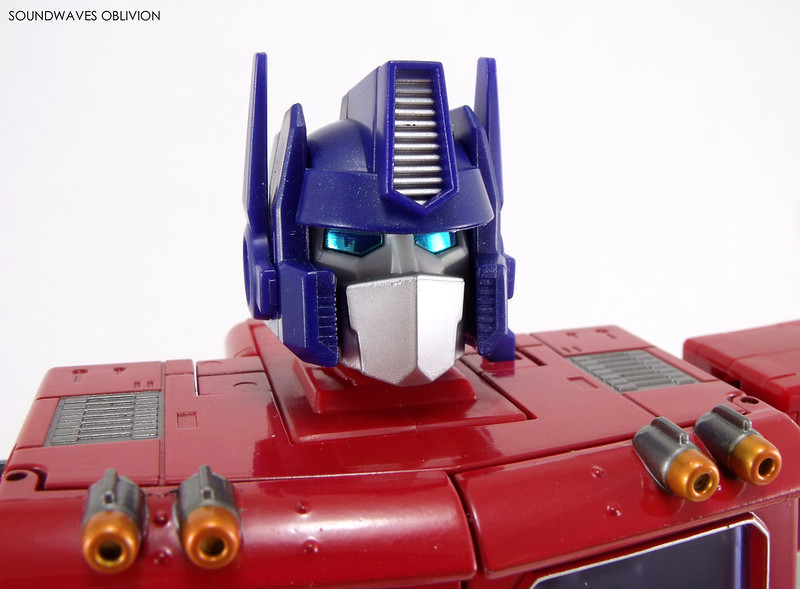 Starting from the head down; there is a button on the back of the head which moves the face plate to show Convoy talking as he did in the animation. Additionally an "Easter Egg" with this figure is if you dissemble the head and remove the face pate, there is a mouth, similar to how it appeared in the Marvel comics. The head itself is on a ball joint so had a wide range of movement. 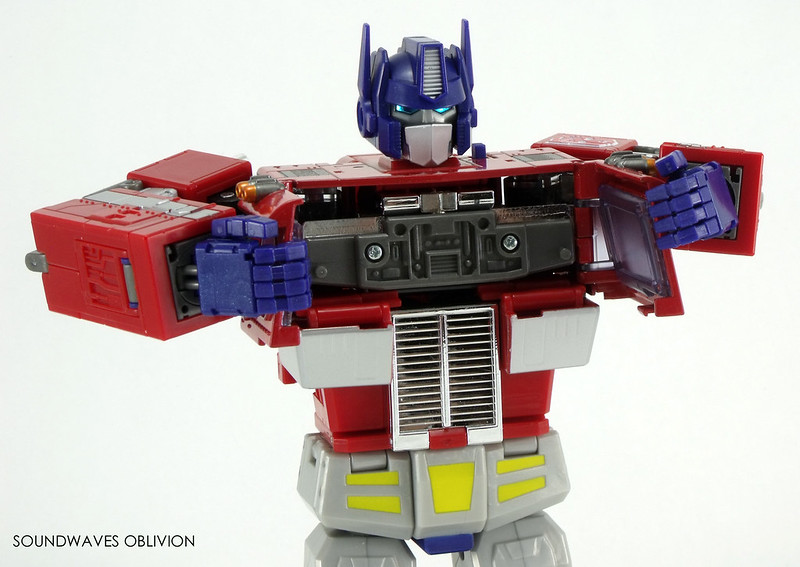 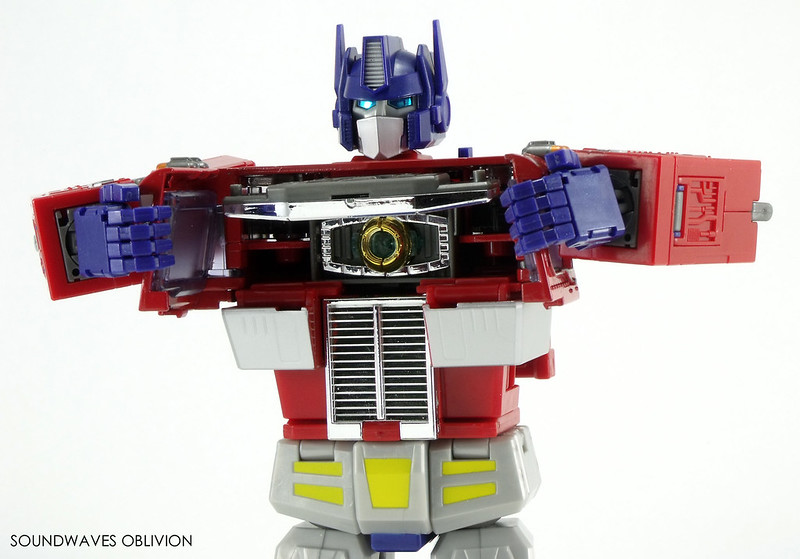 The chest opens up similar to the 1986 animated movie and you can reveal the Matrix of Leadership inside which can be removed. There is also a blue switch to the left of Convoys head which lights up the Matrix. 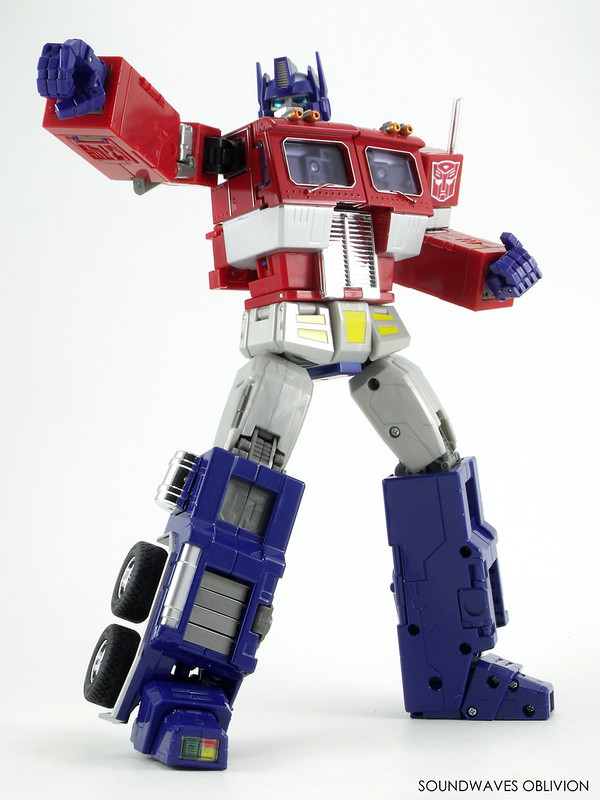 There is one Cybertron / Autobot insignia embossed on Convoys left shoulder just like the animation model and the elbows feature real working pistons for added detailing. Both forearms feature flip up communicators as seen in the cartoon. The left arm features an image of Bumble / Bumblebee from the cartoon and the right arm features an image of Starscream. The hands also feature movable fingers and each thumb is on a ball joint. 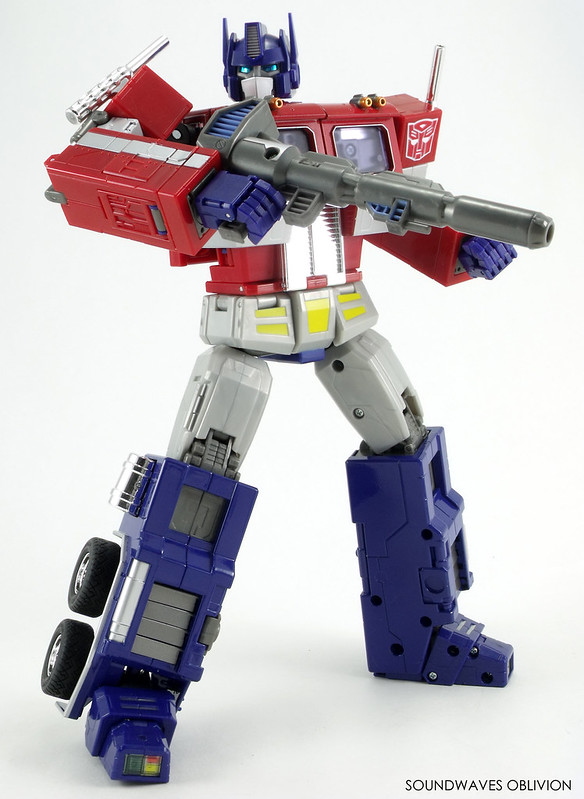 There are vents on Convoys shins and when you press down on the figure these vents open up. The back of the feet also feature working pistons jut like the elbows. The robot mode is very posable but on the other hand this posability is limited, certainly by modern standards. The main limitation is the weight of the figure but is doesn't hinder it too much. 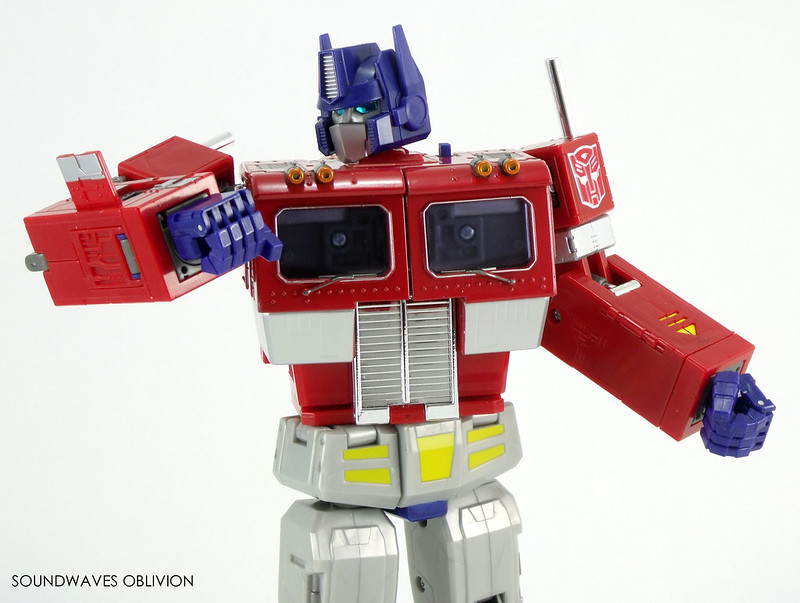 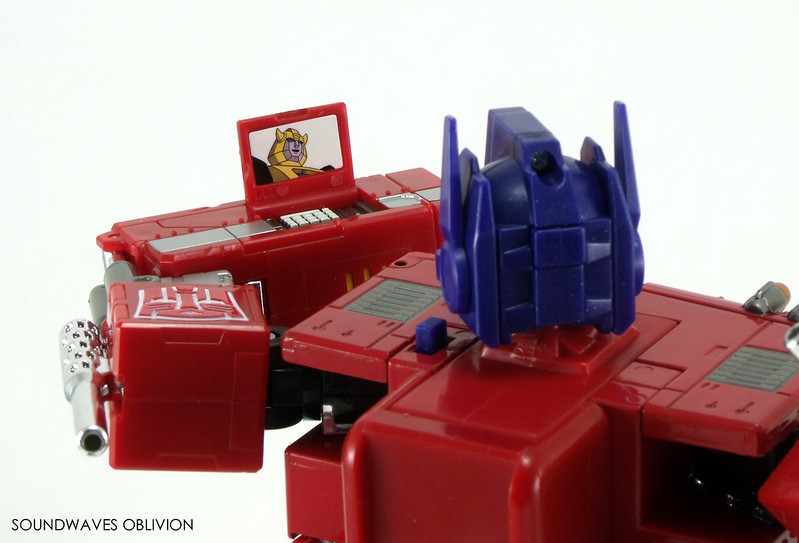 Convoy comes with three weapons, his classic Laser Rifle, Energy Axe and Megatron in his gun mode. For some reason the Laser Rifle is gun metal grey, not black like the original toy or animation. However if you would prefer the black version of the rifle you could always use MP-2 Ultra Magnus' rifle. 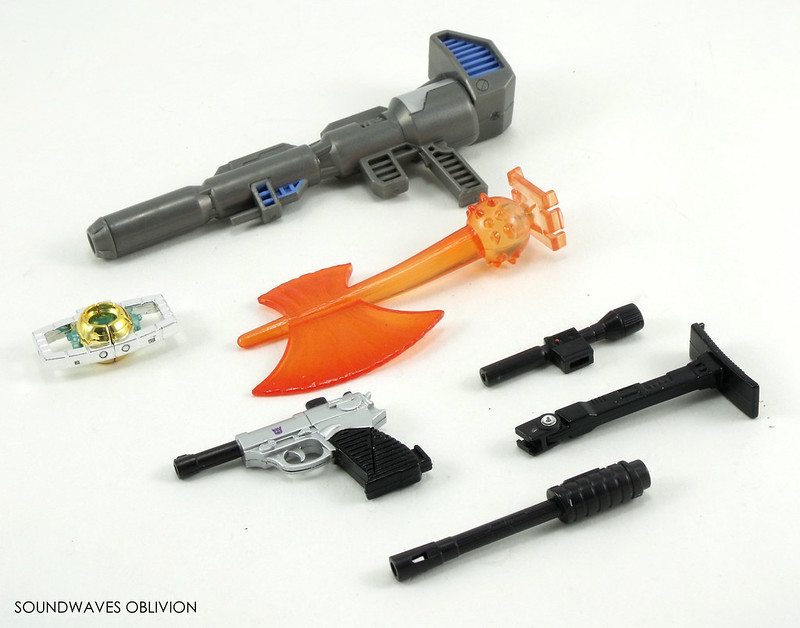 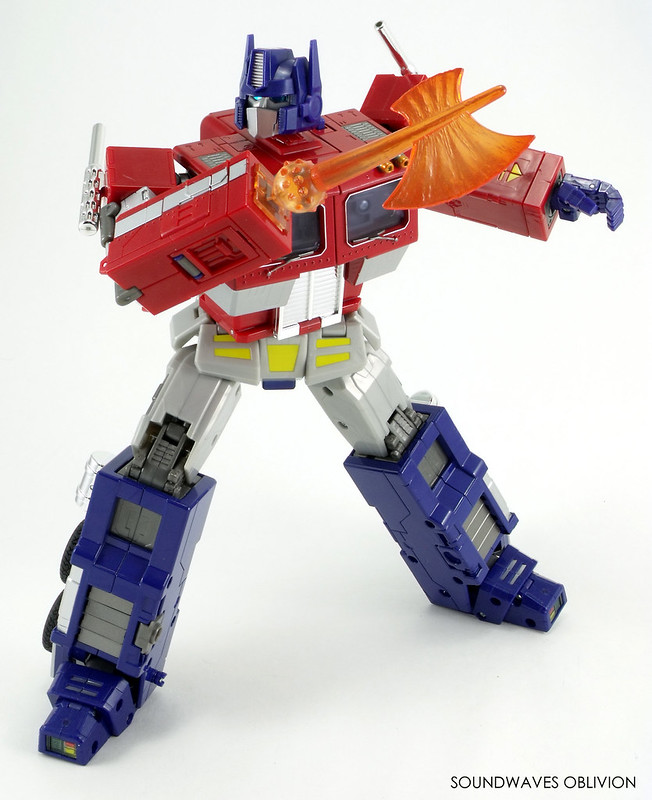 In order to fit the Energy Axe you need to retract the fist and plus the axe into the gap. The axe is made f a translucent orange soft plastic. Unfortunately my copy is degrading as the plastic is getting very sticky to the touch. 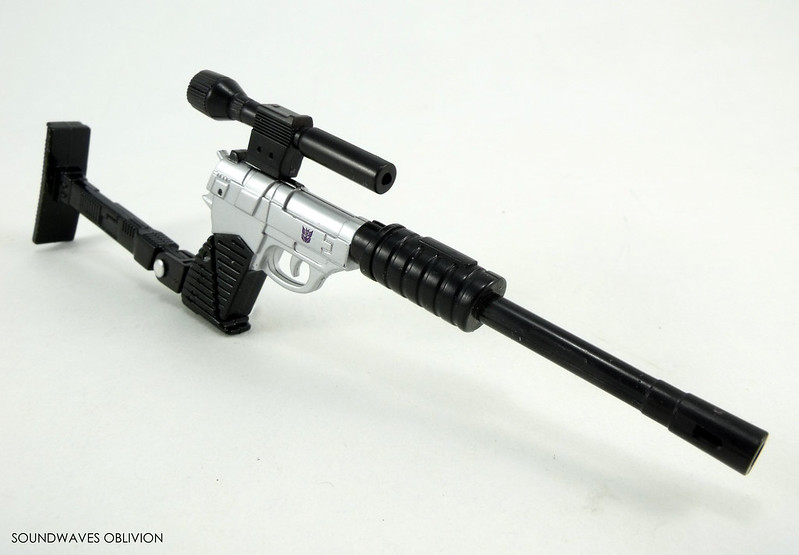 The Megatron gun is quite well detailed for its size. In order to fit in Convoys hand the grip extends to make it longer. Additionally you can remove the silencer, scope and stock which is a nice touch. This mould of the Megatron gun has since been packaged with several other Masterpiece figures (MP-1B, MP-1L, MP-2, MP-4, MP-4S, MP-13, MP-13B & MP-11SW). 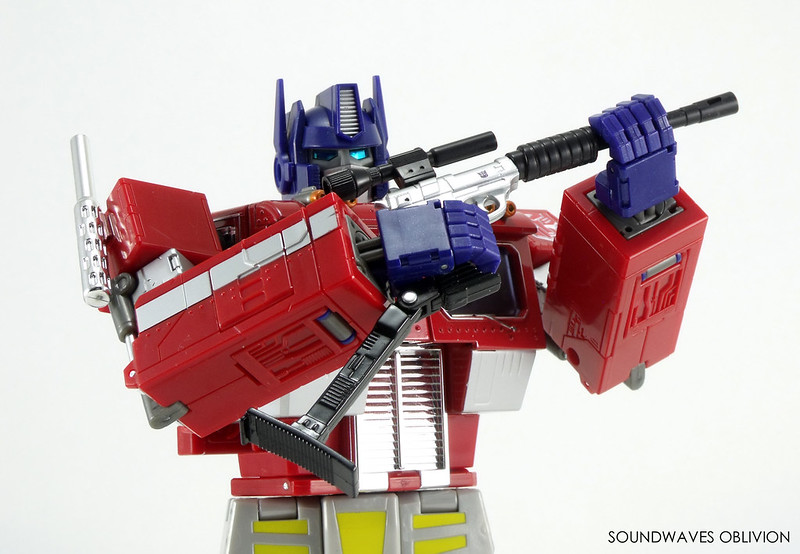 Transformation for MP-1 Convoy is quite fun and the way the wheels fold inside the body is very clever. Unfortunately you can tell that the designers focused on the robot mode rather than the vehicle mode. The wheels in vehicle mode feature real suspension and the tires have "Desert Dog Formula" embossed on them, just like the original G1 toy. The front windows still open up and inside is a seat, however it doesn't come with a driver to fit inside.To finish off the overall look of the vehicle mode you can always assemble the trailer and attach it. MP-4 Convoy Complete Edition released 3 years later in 2006 finally came with the trailer. 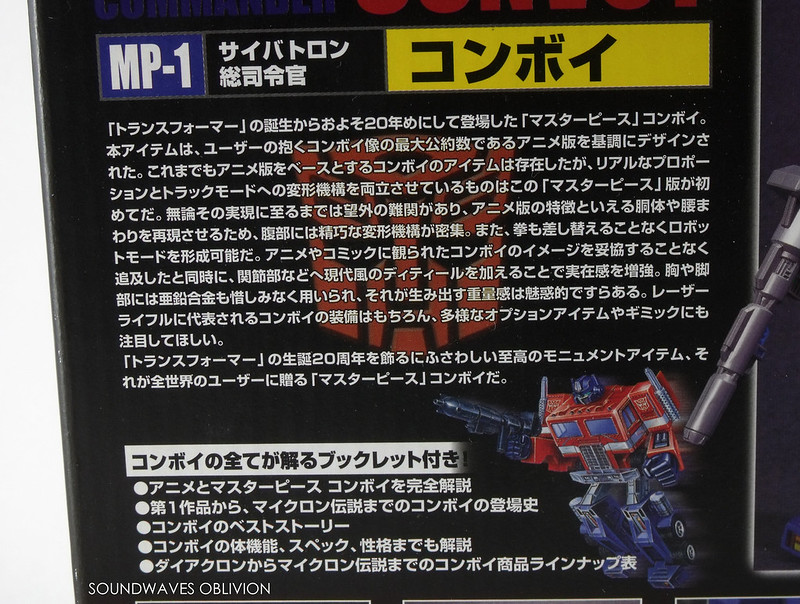 Back of the box translation (also in Page 1 of the booklet)
“Masterpiece” Convoy is on the scene 20 years after the creation of the “Transformers. This item's design is based on the cartoon version, the version that comes to mind when most people think about Convoy. There have already been products based on Convoys appearance from the animated series but this “Masterpiece” version is the first to have realistic proportions with the ability to transform into truck mode. There were of course unexpected difficulties during the design; in order to recreate the waist and torso in the animated style, an elaborate transformation mechanism is contained within the abdomen. The robot mode can also be formed without removable fists. Without making any compromises we pursued the appearance of Convoy as seen in the comics and cartoon with additional modern enhancements to the joints etc for a sense of realism. Zinc alloy has been generously used for the legs and chest creating a captivating sense of mass. Convoy comes with his famous Laser Rifle and we’d also like you to pay attention to the other gimmicks and optional accessories.
This supreme monument is certainly worthy to celebrate the Transformers 20th anniversary; Masterpiece Convoy is a gift for the whole world.
A booklet all about Convoy is also included!
● Descriptions of the animated and Masterpiece Convoy
● The history of Convoys appearance from his first outing to Micron Legend
● Convoy’s best story
● Explanations of Convoys functionality, personality and specifications
● A Convoy product lineup from Diaclone to Micron Legend 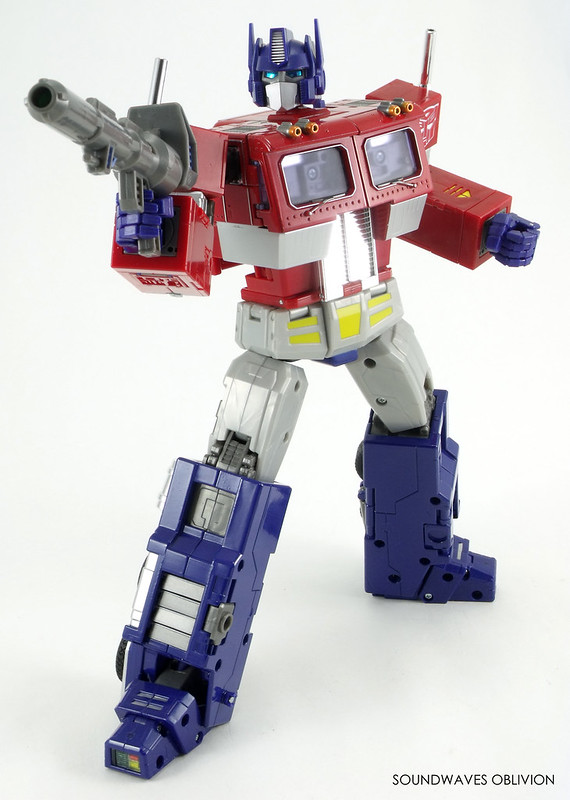 Translations from page 2 of the booklet:
Item: Matrix
The sign of a Cybertron General Commander, protected by Convoy. In the “2010” cartoon series “The Resurrection of Convoy Part 2”, it was opened for the wisdom of the ages to save the galaxy from danger.
Item: Energy Axe
Only used once in the cartoon episode “Secret of the Ruby Crystals”. He deployed it in a fierce battle with his nemesis, Megatron. Many Transformers can turn their fists into weapons or tools.
Item: Laser Rifle
Convoy’s favourite weapon. Prides himself with his accuracy, even when firing one handed. In the episode “Operation Space Bridge” he demonstrates that he can regulate its output by adjusting the barrel.
Item: Megatron Gun
Convoy has occasionally worked alongside his enemy, Megatron. Convoy has used Megatron in his gun form in the episodes “Operation: Obliterate Earth” and “Insectron Syndrome”.

Function: Communicator
Convoy is equipped with communicators in both arms. The triangles on both his arms are an energy gauge and both light up when he needs to replenish his energy as seen in “Capture the Negavator”.

Function: Suspension
Supporting his body are Convoy’s robust legs. In “Transformers The Movie”, he lands following a high altitude jump and attacks the Destrons without losing his balance.

Function: Suspension
Convoy’s high performance suspension installed around his wheels allow him to travel on the rough terrain of the United States with its many valleys (image taken from the episode “Operation: Survival”). 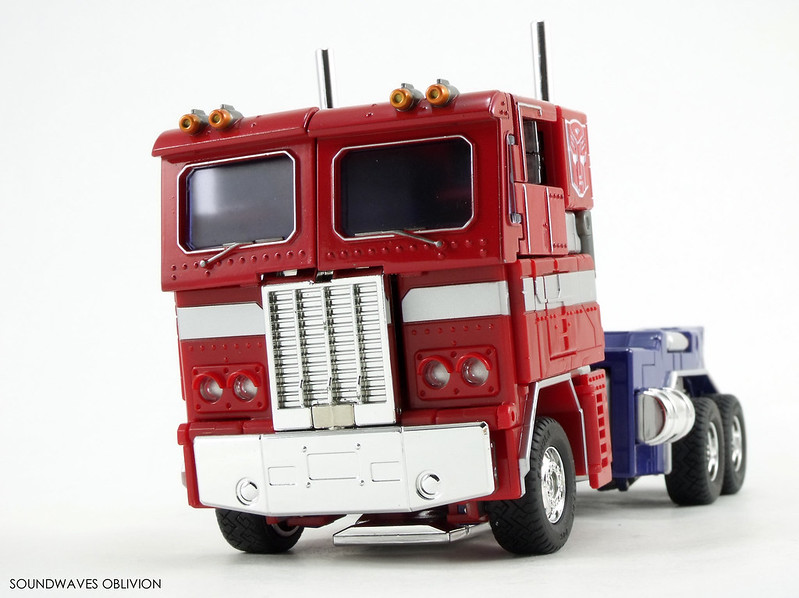 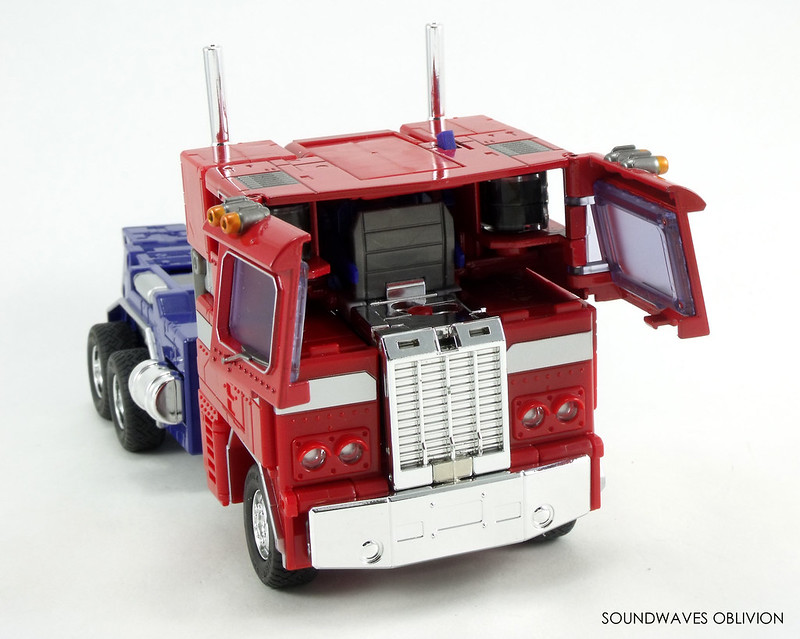 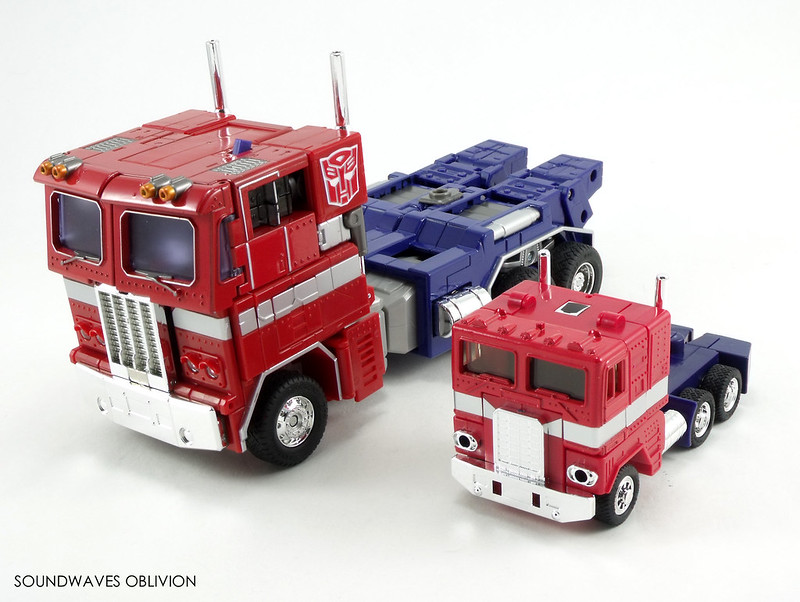 20th Anniversary Optimus Prime
Hasbro released their version of MP-1 Convoy in 2004 called 20th Anniversary Optimus Prime, the first wave came with the same grey gun as MP-1 Convoy but later waves came with a black gun. This figure also sits in a cardboard tray and although it doesn't turn into the trailer, it resembles the interior of the trailer complete with the Combat Deck robot. The 20th Anniversary Optimus comes with shortened smokestacks and additional battle damage and weathering painted on the figure.
Toyfare Magazine covered the release of Hasbro's version in their May 2004 magazine, prior to the release they contacted me to ask to use one of my photographs for their magazine. I obliged and they used the photograph, which wasn't the best of poses but it was the one they wanted. Unfortunately they ignored my credit request, crediting the photograph as "Photo courtesy of Oblivion of megatronofcybertron2.homestead.com" - as far as I know my name is not "Oblivion" nor was it my main website, just a now obsolete subdomain, the main website being SoundwavesOblivion.com! 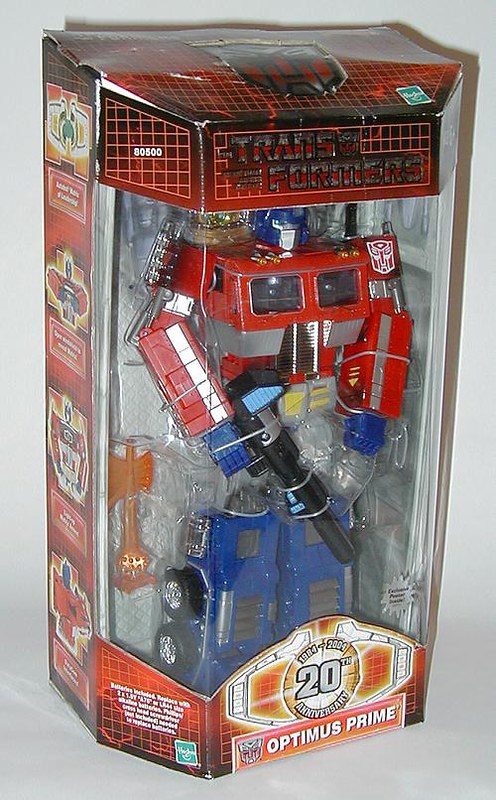 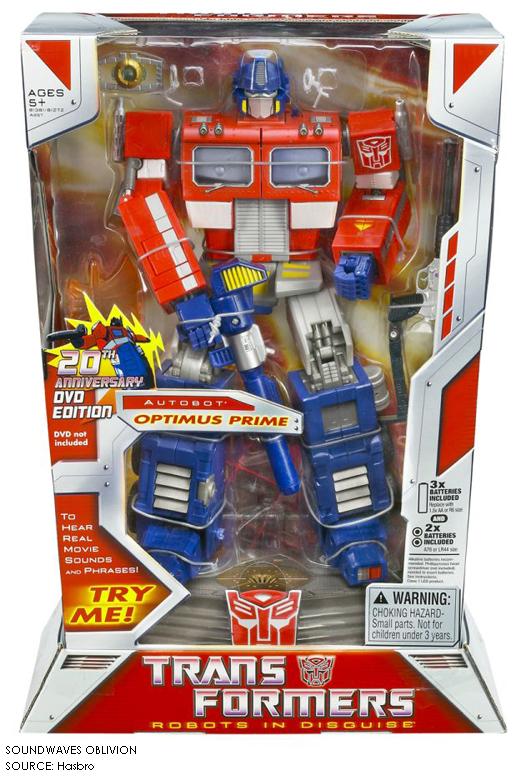 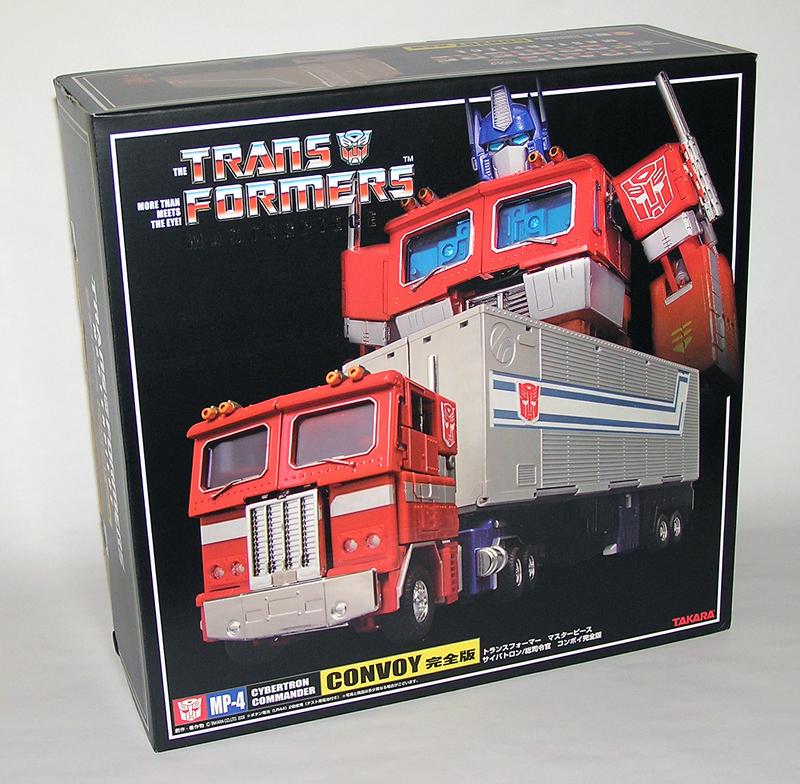 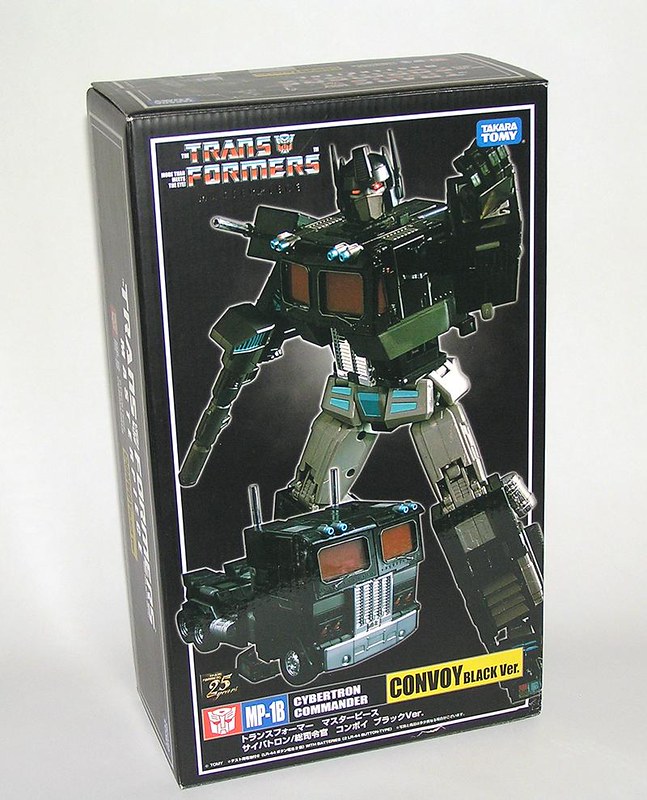 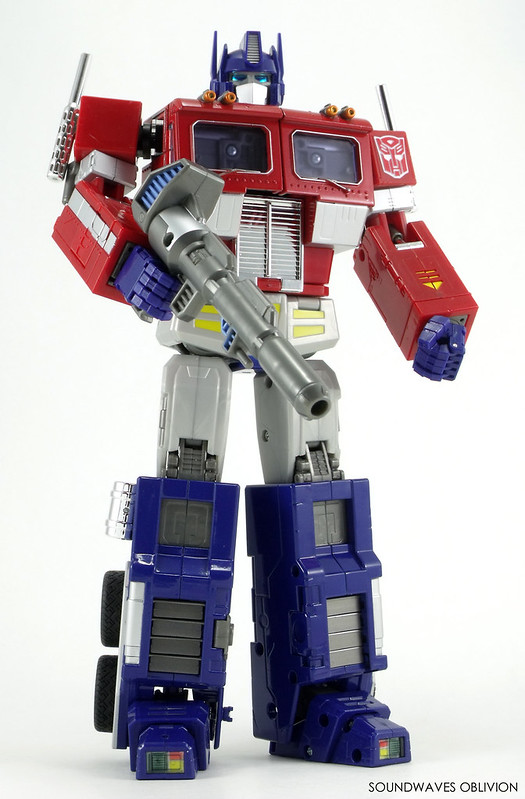