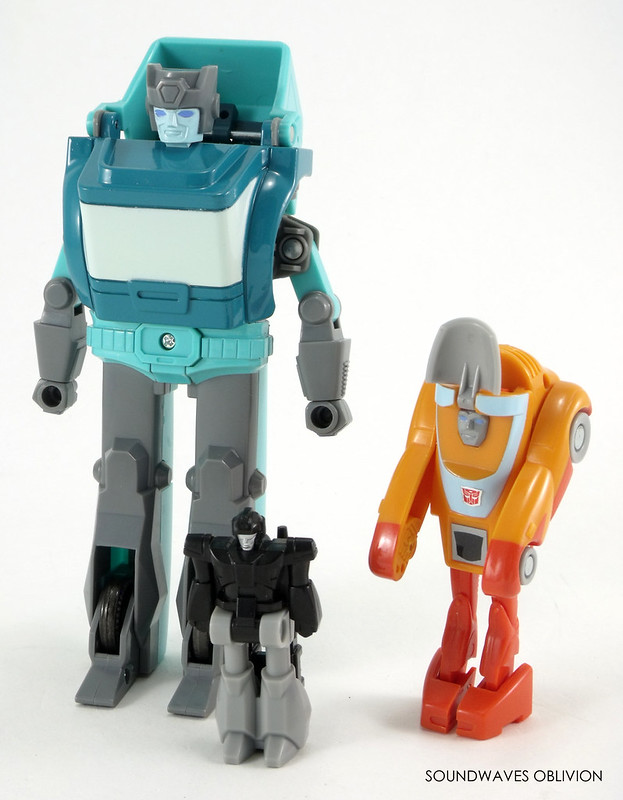 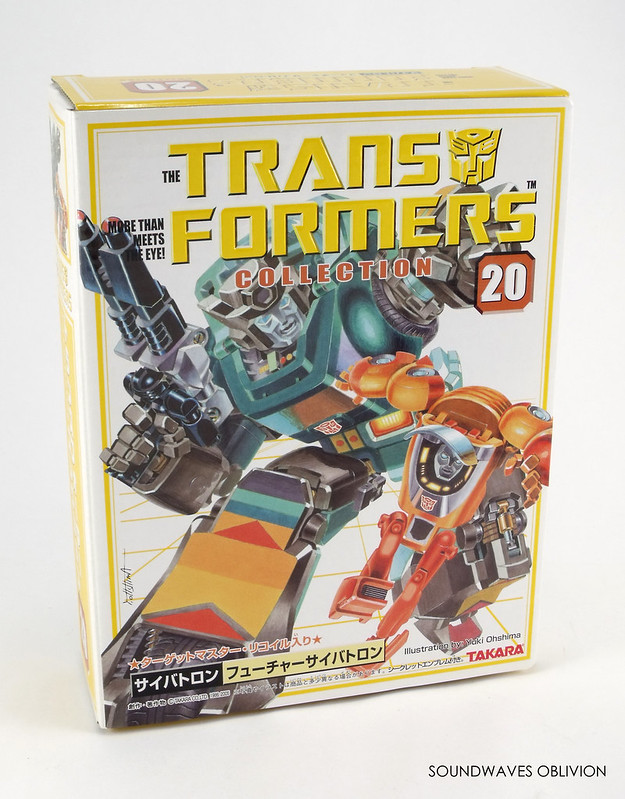 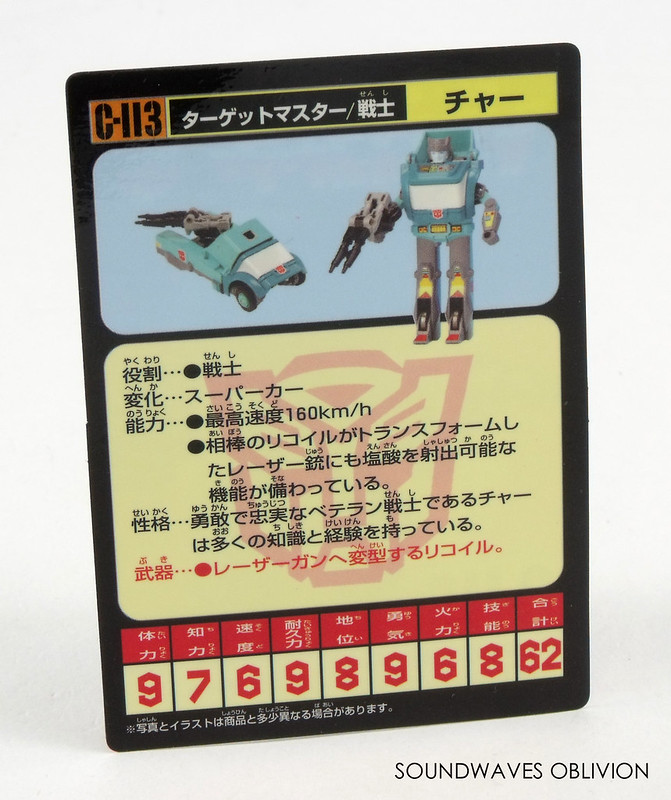 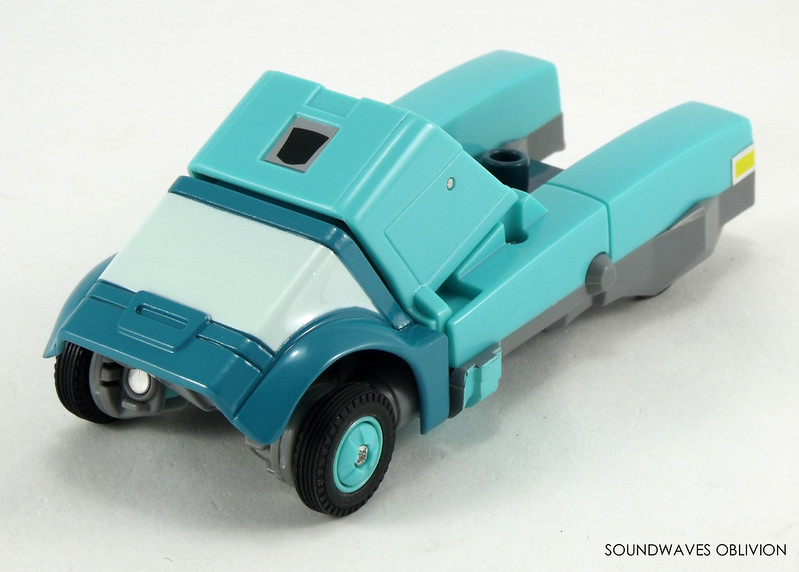 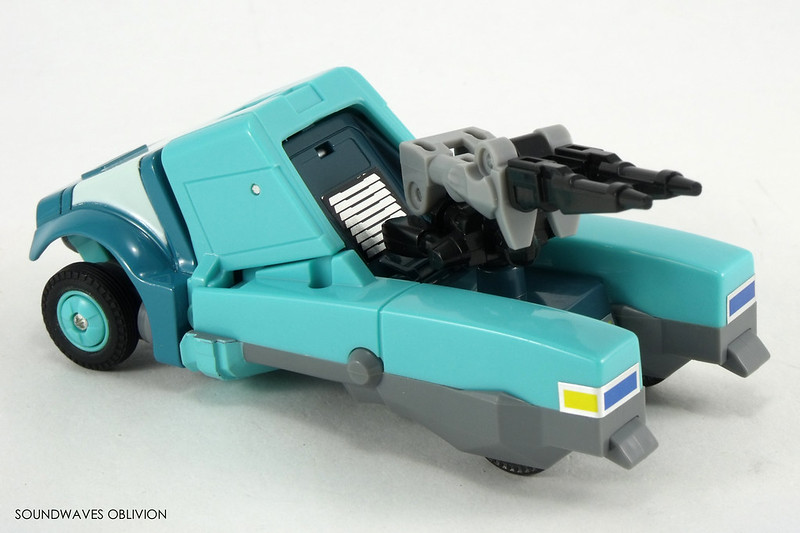 Chear comes packaged in vehicle mode which is a futuristic pickup truck and the Targetmaster mould includes a port on the rear of the truck for Recoil to plug into as a weapon. Chear has quite a weight with the front portion of the vehicle made out of diecast metal. Die cast metal is also used for the two rear wheels and the front wheels have rubber tyres. 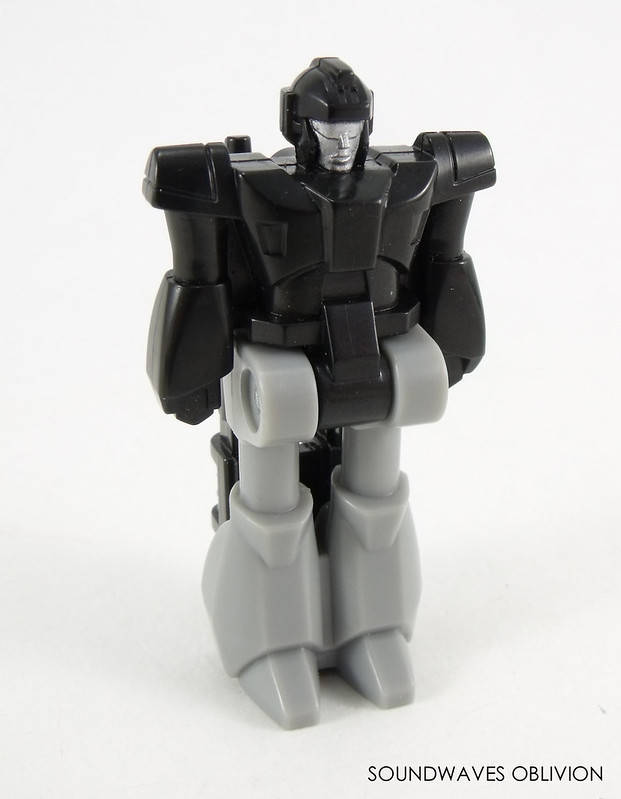 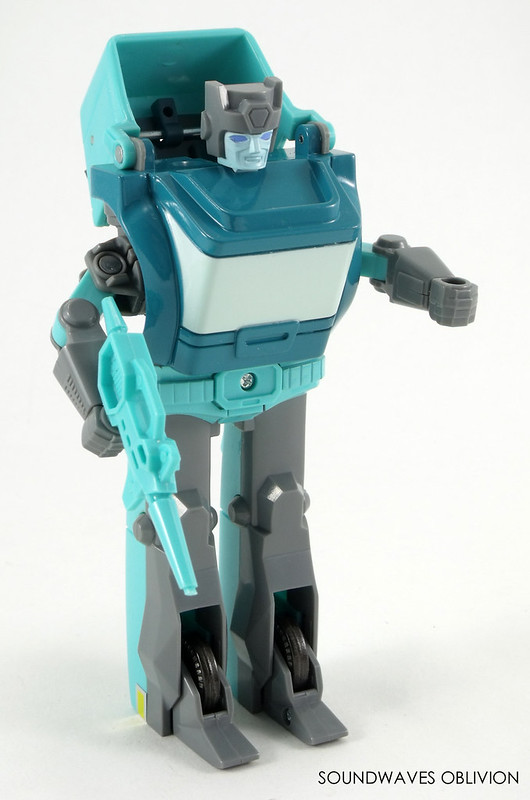 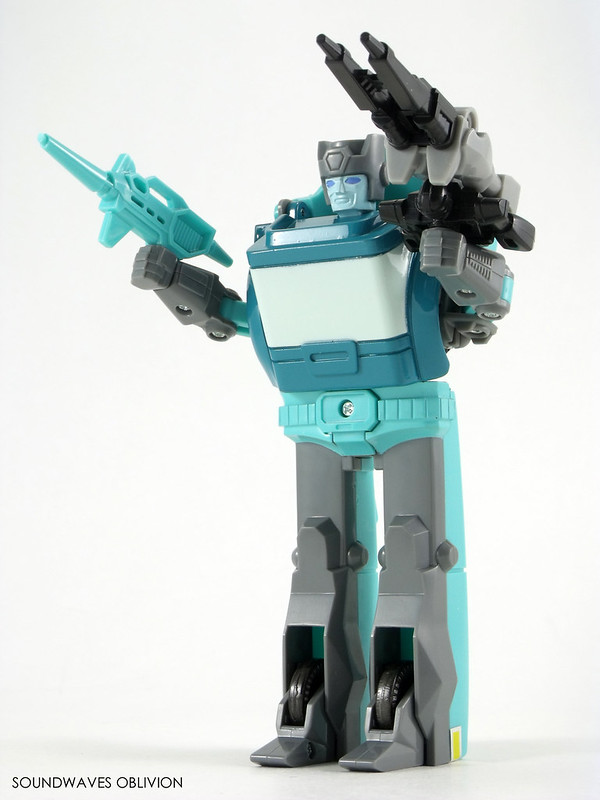 Transformation into robot mode is basic and the robot form looks quite close to the animation. The Targetmaster mould of Chear has wider fist holes so he can hold both weapons and the generous arm articulation allows a few poses with the weaponry. Chears legs however do not move. 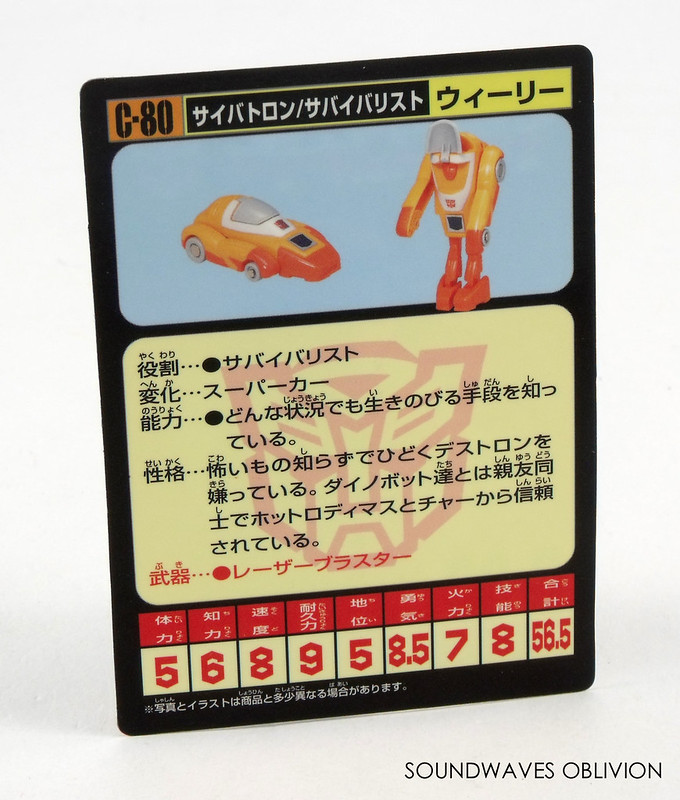 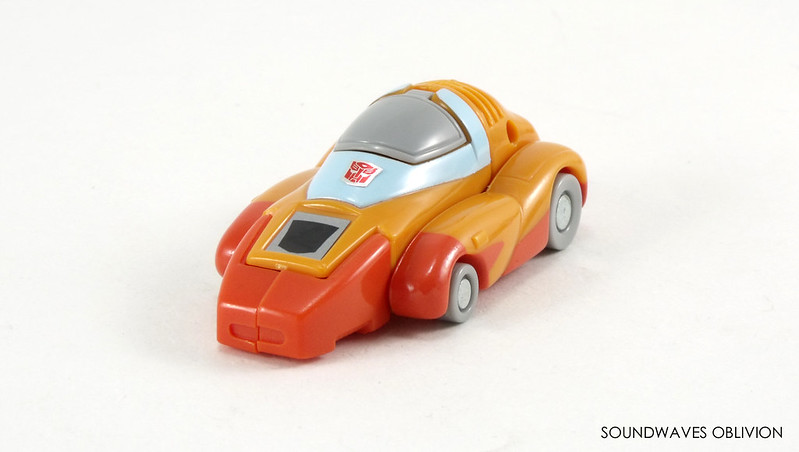 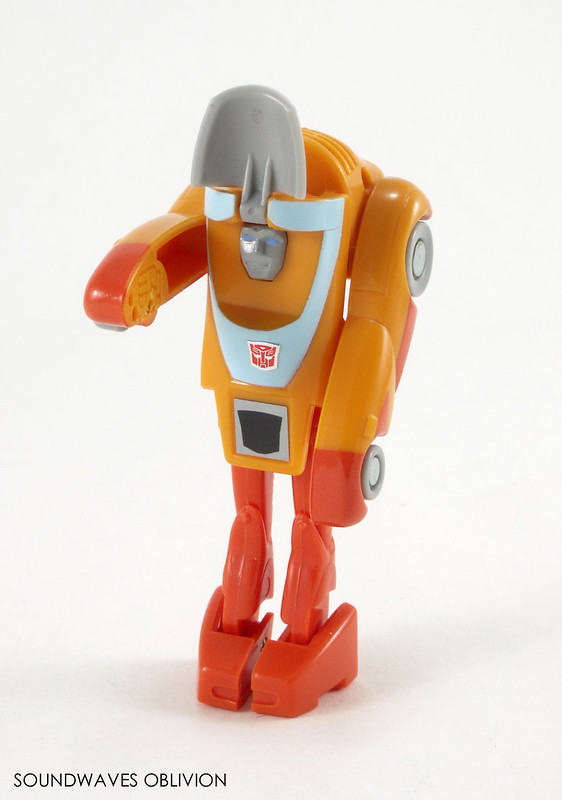 The Minibot Wheelie also comes with the set. Wheelie is the first Minibot that does not originate from the Micro Change toy line and also happens to be the weakest design. Wheelies vehicle mode isn't to bad, he is an orange futuristic race car and robot mode is where the problems are. The arms are too long, he has a hunch back and skinny legs. For the reissue Takara did repaint the original orange face a light grey colour with blue eyes. 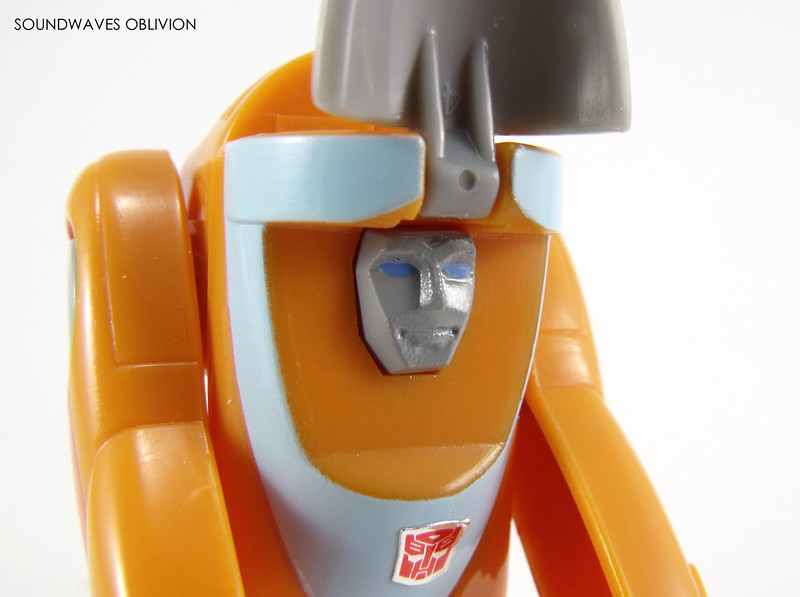 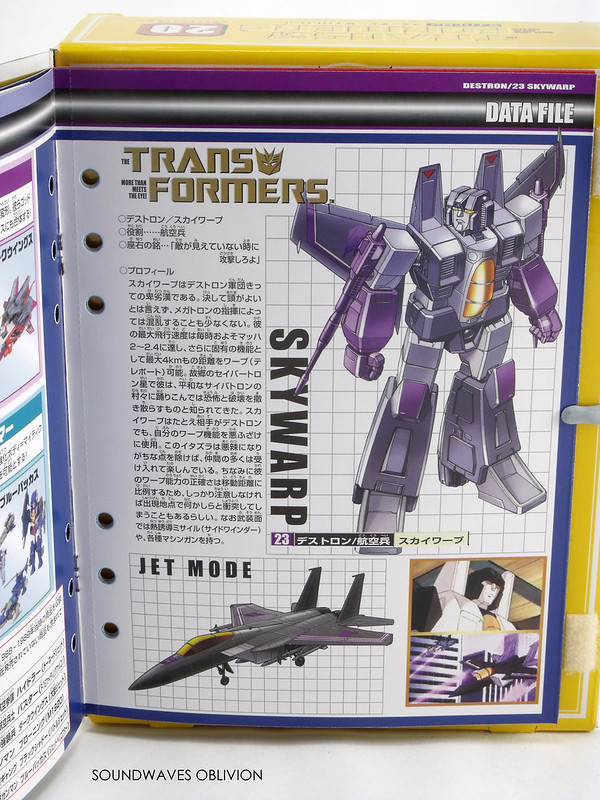 ○ Destron Skywarp
○ Function: Aerial Warrior
○ Motto: “Strike when the enemy isn’t looking.”
○ Profile
Skywarp is the sneakiest of the Destrons. You could never call him smart and would be confused without Megatron’s command. In flight he can reach speeds of Mach 2 to 2.4 per hour and has a unique ability enabling him to warp (teleport) up to a distance of 4km. On his homeworld on Seibertron he was known to bring fear and destruction upon peaceful Cybertron villages. Skywarp will even prank fellow Destrons with his warp ability. Many of his peers enjoy the joke apart from the one being pranked. The accuracy of his warp ability depends on the distance travelled, if he’s not careful he may collide into things as he reappears. Armed with heat seeking missiles (sidewinder) and a variable machine gun.
Western release in 1984 “THE TRANSFORMERS” Skywarp
Released June 1985 “TRANSFORMERS” No. 23 Skywarp
Released June 2001 “TRANSFORMERS” Collectors Edition No.23 Skywarp
Western release in 2003 “THE TRANSFORMERS GENERATION ONE” Skywarp
Skywarp was released among the initial lineup of toys with the Destron styled colouring of black and purple. As with Thundercracker, there are variations with different vertical tail fins depending on the time of release as well as differences with the shape of the canopy. Additionally the western release “GENERATION ONE” version had newly shaped missile accessories to comply with the latest safety standards.
Wheelie 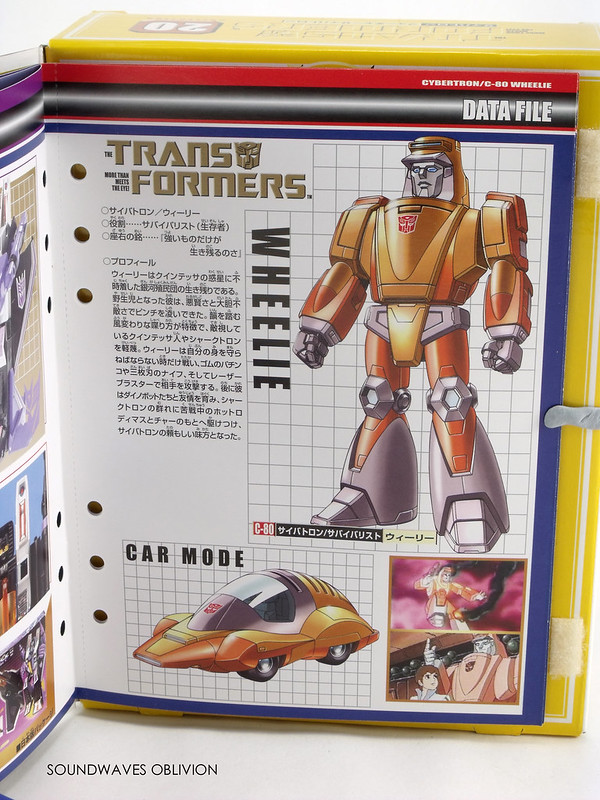 ○ Cybertron Wheelie
○ Function: Survivalist (Survivor)
○ Motto: “Only the strong survive.”
○ Profile
Wheelie is a survivor from the galactic colonies who crash landed on planet Quintessa. A wild boy who survives tough predicaments using cunning and fearlessness. Distinguished by talking in rhymes and will always defend enemies of the Quintessons and Sharktrons. Wheelie will only fight to defend himself; armed with a slingshot, three bladed knife and laser rifle. A reliable Cybertron ally; he later developed a close friendship with the Dinobots and rushed to aid Hot Rodimus and Chear who were battling a swarm of Sharktrons.
Western release in 1986 “THE TRANSFORMERS” Wheelie
Released November 1986 “TRANSFORMERS” C-80 Wheelie
Released August 2005 “Transformers Collection” 20 Future Cybertron
Wheelie was released in 1986 and is the only Minibot released that year who was an entirely new mould. In the 1986 series Wheelie was categorised as a Minibot; and Wheelie was also present in the initial 1987 catalogue for the “Headmasters” series in Japan. 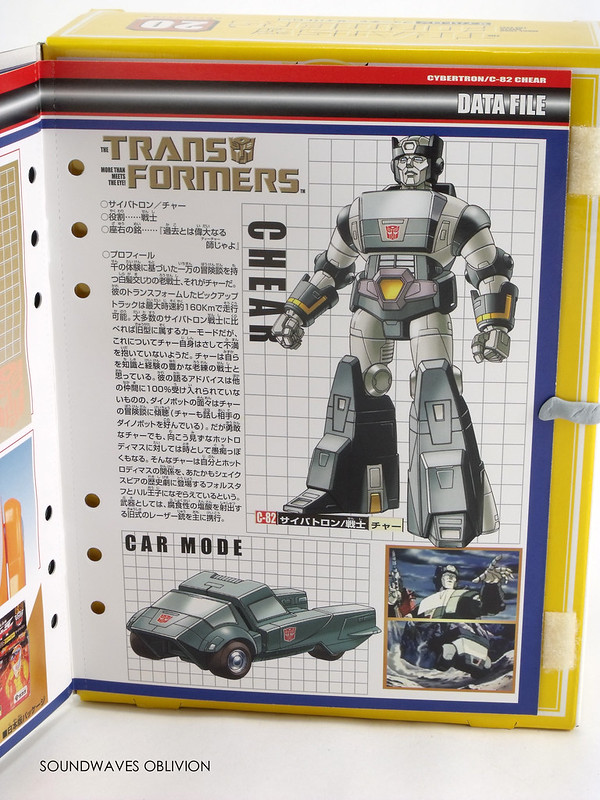 ○ Cybertron Chear
○ Function: Warrior
○ Motto: “The past is the greatest teacher.”
○ Profile:
Chear is a veteran warrior who always has a story based on his one thousand adventures. Transforms into a pickup truck with a maximum speed of 160 km/h. Compared with the other Cybertrons, Chear’s vehicle mode is rather old fashioned though he doesn’t seem bothered by this. Chear considers himself as an experienced warrior with a wealth of knowledge and experience. Although his advice is not always accepted 100%, the Dinobots always enjoy listening to his tales (and Chear also enjoys the Dinobots company). The brave Chear occasionally grumbles over the reckless Hot Rodimus. It is said that Chear compares his relationship with Hot Rodimus to that of Falstaff and Prince Hal from Shakespeare's historical play. Carries an old fashioned laser gun that fires a corrosive hydrochloric acid.
Western release in 1986 “THE TRANSFORMERS” Kup
Released November 1986 “TRANSFORMERS” C-82 Chear
Western release in 1987 “THE TRANSFORMERS” Kup (Targetmaster)
Released August 2005 “Transformers Collection” 20 Future Cybertron
The earliest western release of Chear used die cast metal and rubber wheels, but mid production these were changed to plastic. Even the 1987 Targetmaster version, with partner Recoil, had plastic wheels. Although the 1986 gun did not come with the Targetmaster version, the 2005 “Transformers Collection” version comes with both guns for the first time and the wheels are made of rubber and metal, the same as the initial western release.
View the full photograph gallery here on Flickr.
Posted by Jeremy Barlow at 18:52