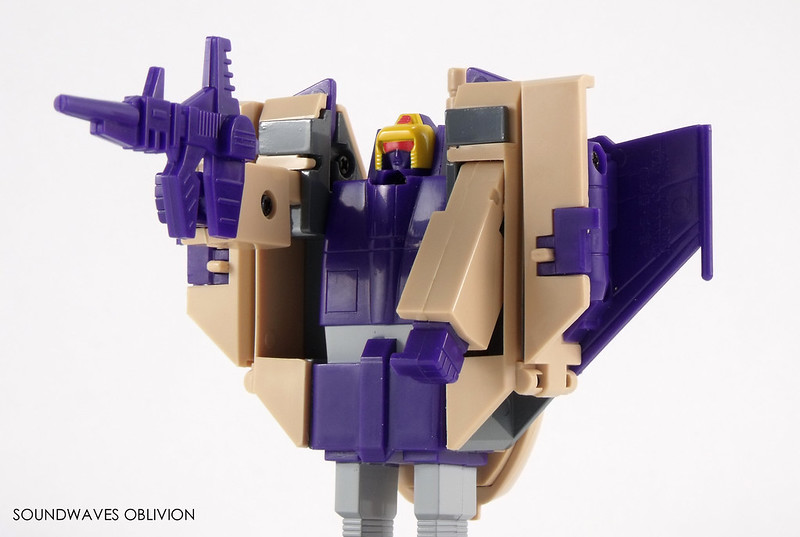 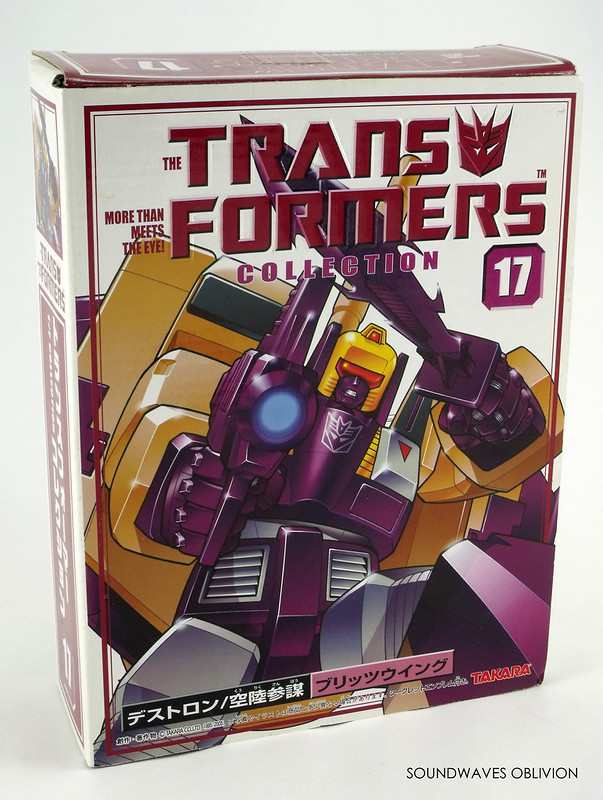 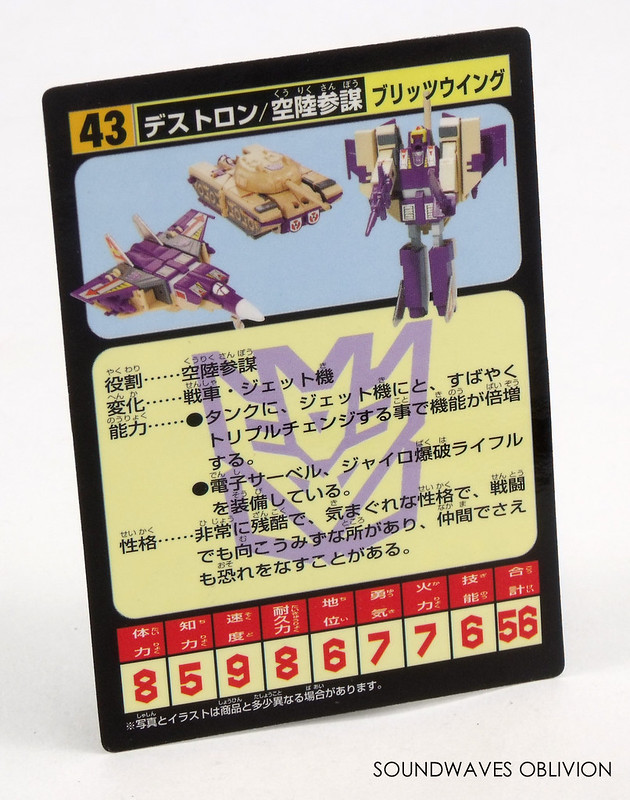 In my opinion, no other Triple Changers released since 1985 have surpassed Blitzwing or Astrotrain both of whom look great in all three modes. The only other Triple Changer that I have been impressed with, and highly recommend is the 2013 Generations Springer. 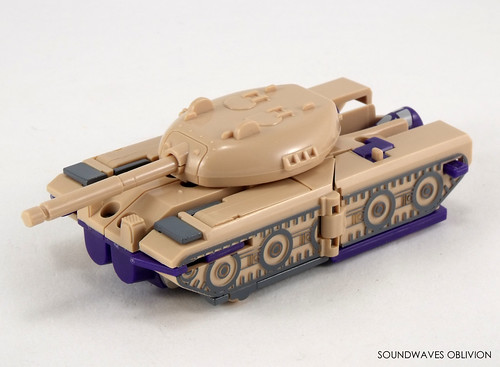 Blitzwing was originally released in the Diaclone series in August 1984 in a completely different colour scheme to what would eventually appear in the Transformers toyline. The Diaclone version was named "Variable Squadron Triple Changer Jet Type" and was close in colour to the original Japanese Type-74 Tank and Russian Mikoyan-Gurevich MiG-25 Jet.


Promotional artwork and a few mock up samples of the Diaclone Blitzwing depict the robot mode with a completely different head before settling on the version finally used. 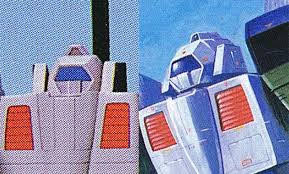 Much like the majority of the Diaclone line, it also saw a release in Italy in late 1984 called "Aereo A Tripla Trasformazione" or Triple Transformation Plane. The Italian version was very close to the Japanese version however this replaced the 3 missiles with two "safety" missiles. The sword that came with the Italian version was also altered so the tip was rounded unlike the pointed Diaclone version.

In 1985 both Hasbro and Takara released Bitzwing who featured a very different colour scheme to the Diaclone and Trasformer versions. Blitzwing was released with the blunt sword mould which came with the Italian Trasformer version. Interestingly the blunt sword mould was also released with Takara's version of Blitzwing in Japan. When Blitzwing was reissued in Japan under the Transformers Collection Series in 2005 the sharper sword was finally included. 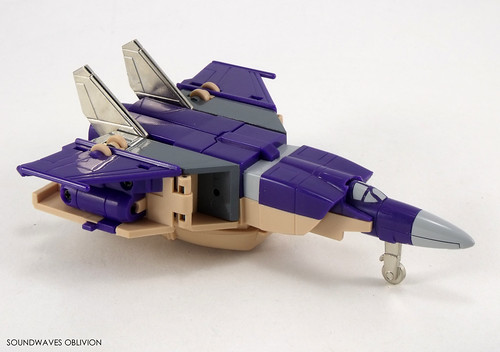 Also released alongside Blitzwing as an e-hobby exclusive was the new character Overcharge who retained the original Diaclone colouring. Interestingly this release is not a Destron but is referred to as a "Terrorbot" on the included character card. The Quintessons created them as military hardware however they developed sentience. Overcharge comes with Blitzwings sticker sheet and a second sticker sheet with 6 faction stickers: Cybertron, Destron, Quintesson / Terrorbot, Ancient, Earth Defence Command & Unicron Herald. 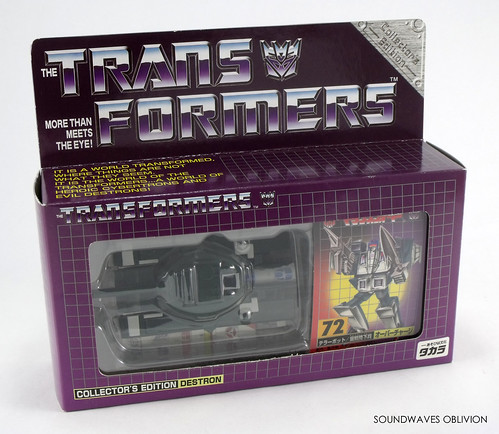 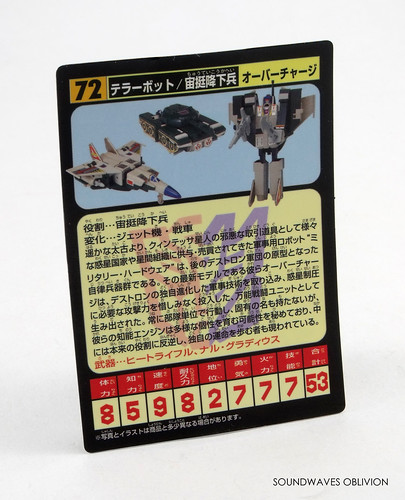 Profile (Translated from the Trading Card)
72 Terrorbot Overcharge
Function: Spaceborne Trooper
Transformation: Jet Plane & Tank
In the distant past, "military hardware" robots were furnished and traded to numerous planetary nations and interstellar organizations as tools of the Quintessons' malevolent business dealings. These autonomous weapons would become the prototypes of the Decepticons. The newest model of this line, the Overcharges, were produced as all-purpose combat units, ones incorporated with the Decepticons' distinctively evolved military technology and more than sufficiently endowed with the offensive strength necessary for global domination. Normally, groups of them act as a single unit, not even possessing individual names, but their intelligence engines conceal the capability to foster diverse personalities, and emerging among their ranks are some who have rebelled against their original function and now seek their own unique destinies.
Weapon(s): Heat Rifle, Null Gladius
STR…8; INT...5; SPD...9; END...8; RNK...2; CRG...7; FPR...7; SKL...7; TTL...53 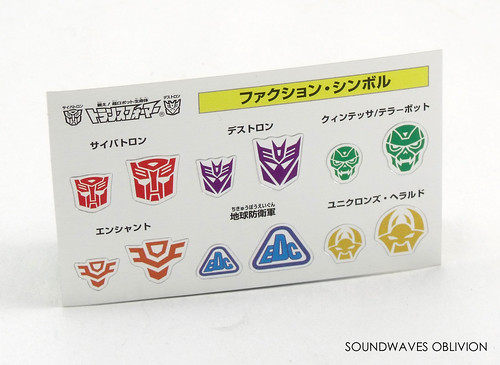 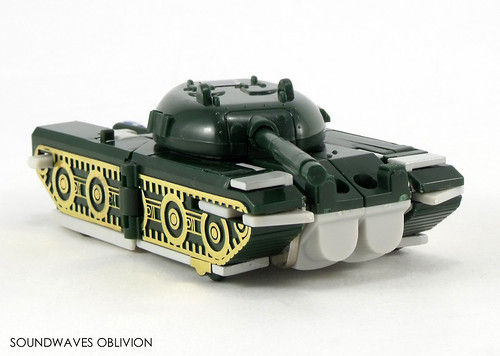 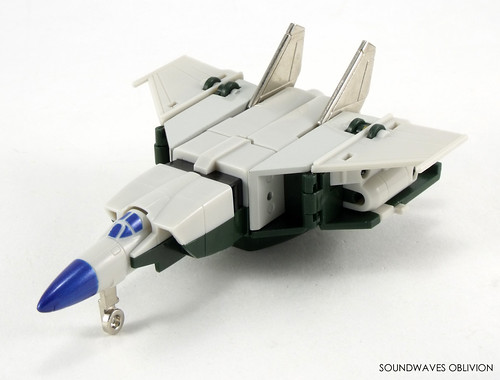 Blitzwing was not reissued in Hasbro's Commemorative Series line however he was eventually released under Hasbro's Platinum Edition line in the Decepticon Triple Changers box set in 2015. Blitzwing was released with Astrotrain but both figures were not released in their original colour schemes. Blitzwing has a brown tank mode and red jet mode as it is based on the 1987 Duocon Flywheels. Astrotrain has a white, orange and purple colour scheme seemingly based on the 1989 Transformers Victory Multiforce member Machtackle. 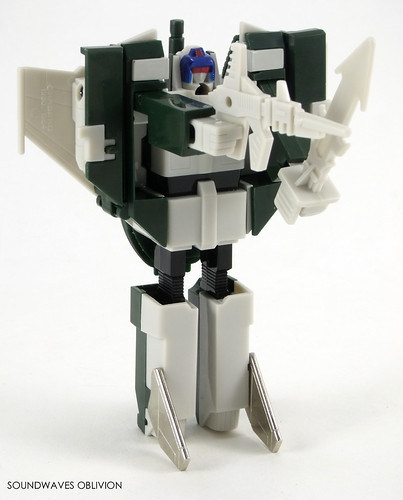 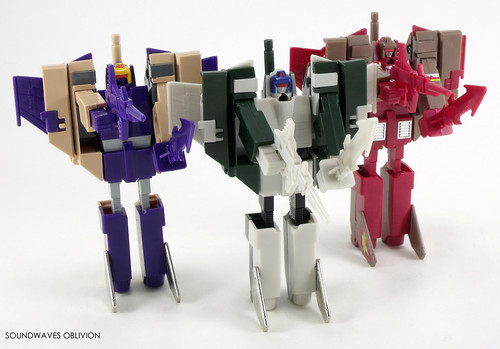 Much like the Transformers Collection version, the Platinum Edition also featured the sharper sword. 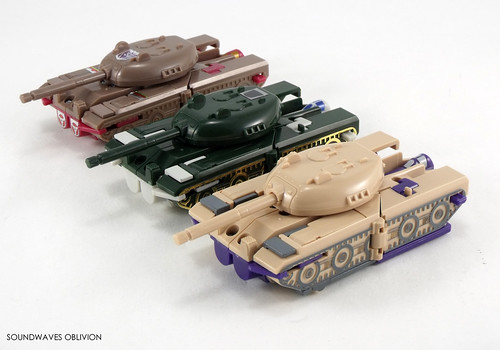 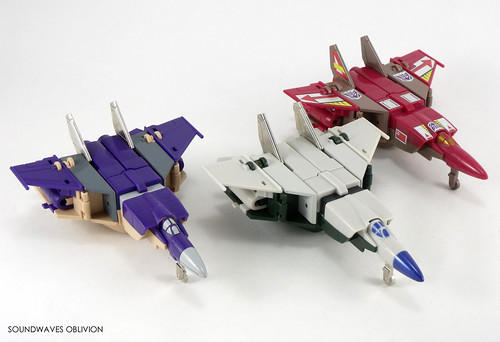 The Transformers Collection Series Blitzwing comes with Character Data Files for both Predaking and Blitzwing (both of whom have very similar mottos): 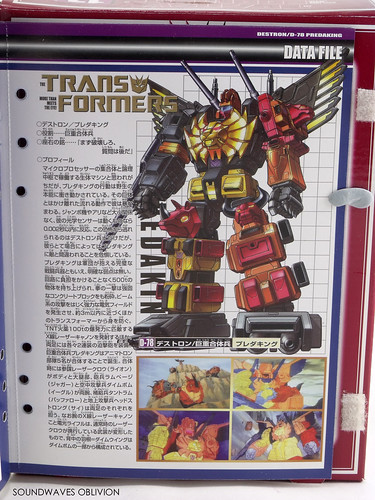 ○ Destron Predaking
○ Function: Giant Combiner Warrior
○ Motto: “Destroy first, ask questions later.”
○ Profile:
Although a living machine who operates with a collection of microprocessors and a logic centre, Predakings behaviour is driven by pure instinct. His giant form rampages with a fierce fluidity. His optical sensors react to any movement within 0.002 seconds regardless of size, be it a jumbo jet or an ant. Only Destron warriors can escape this terror however they fear that Predaking may mistake them for an enemy. Predaking is the perfect weapon with no known weaknesses. He can lift a 500 ton object without straining a circuit and a single punch from his fist can shatter a solid concrete block. Generates a powerful electric field around himself which repels energy based beam attacks and prevents other Transformers from getting within 3m of him. As well as his X-Ray Laser cannon which is equivalent to the power of 100 tons of TNT, each foot is equipped with twin mortars. The giant warrior Predaking is made up of the five Animatrons. Combined, Staff Officer Razorclaw (lion) forms the body, Gunner Rampage (tiger) and Aerial Attack Soldier Divebomb (eagle) form the arms and Fueler Tantrum (buffalo) and Ground Assault Headstrong (Rhinoceros) form both legs. The X-Ray Cannon mounted on his arm and Lightning Rifle are modified versions of Razorclaw’s standard weapons and the wings on his back consist of parts from Divebomb. 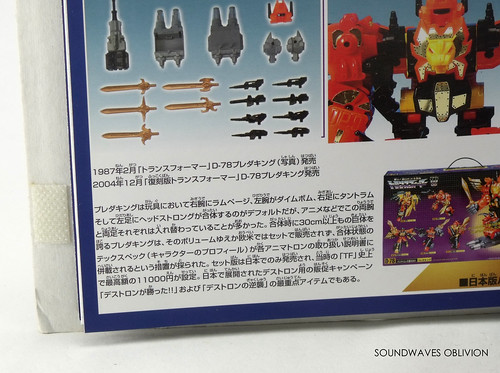 Released February 1987 “Transformers” D-78 Predaking
Released December 2004 “Transformers Reissue” D-78 Predaking
Predaking is comprised of Rampage for the right arm, Divebomb for the left arm, Tantrum for the right leg and Headstrong for the left leg. In the cartoon the arms and legs were often swapped around. When combined, Predaking stands 30cm tall and possibly due to its size, the giftset was not sold in Europe or America but Predakings tech spec (character profile) was included in each of the Animatrons instructions. The giftset was only released in Japan for 11,000 yen, the highest price point of any Transformer at this point in time. Predaking was also the flagship product for the campaigns “Destron Victory!” and “Destron’s Counterattack” which were launched in Japan. 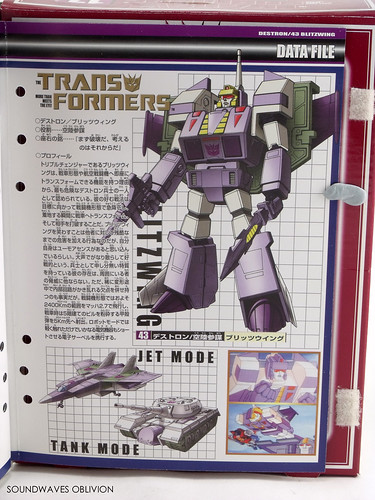 ○ Destron / Blitzwing
○ Function: Air / Land Staff Officer
○ Motto: “Destroy first, think later.”
○ Profile:
The Triple Changer Blitzwing is recognised as one of the most dangerous Destrons because of his ability to rapidly transform between his tank and jet forms. His preferred tactic is to dive towards his target in jet form and transform into his tank form when he lands, crushing his target. Thinks he has a sense of humour but what makes him laugh is being brutal and cruel to others. Being loud mouthed and militant gives him great presence as a warrior but is not good for those who have to be around him. One of his drawbacks however is that his circuits sometimes get scrambled when he is in mid-transformation. In fighter jet form he can fly a distance of 2400km at Mach 2.7 and in his tank form his explosive shells can destroy a 5 story building 5km away. In robot mode he carries an electronic saber that will short-circuit any electrical device with the lightest of touches.
Released August 1984 “Diaclone / Variable Squadron Triple Changer”
Released 1985 “The Transformers” Blitzwing
Released November 1985 “Transformers” No.43 Blitzwing
Released January 2005 “Transformers Collection 17” Blitzwing
Blitzwing is based on the original “Diaclone / Variable Squadron”. The “Variable Squadron” version had a dark green and grey colour scheme whose colour was changed to purple matching that of a Destron warrior. The sand coloured tank mode, unique for the Transformers version, was based on the tanks seen in the Middle East during the 1980’s. The western version was also packaged in the tank mode.
Full gallery links:-
Posted by Jeremy Barlow at 18:57