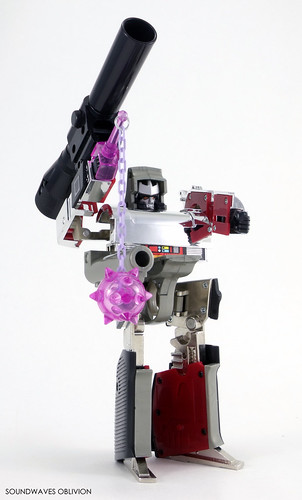 Profile (Translated from the Trading Card)
Collection 06
16-S Destron Emperor of Destruction Megatron
Function: Emperor of Destruction (Destron Leader)
Transformation: Walther P-38 (Pistol)
Ability: His Fusion Cannon has tremendous destructive power. The Fusion Cannon links to a black hole where he draws out antimatter creating a fearful destructive force.
Character: The Destron Emperor is set on the conquest of the universe. He is determined to destroy the Cybertrons and plans to possess Earth's resources.
STR…10; INT...10; SPD...4; END...8; RNK...10; CRG...9; FPR...10; SKL...9; TTL...70 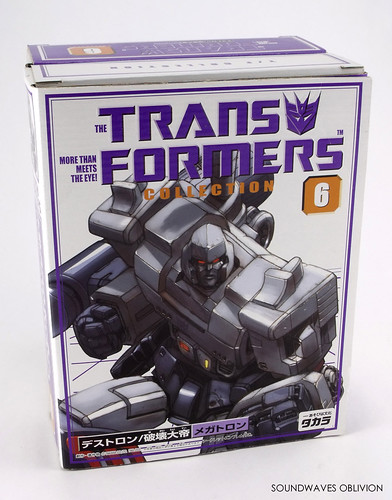 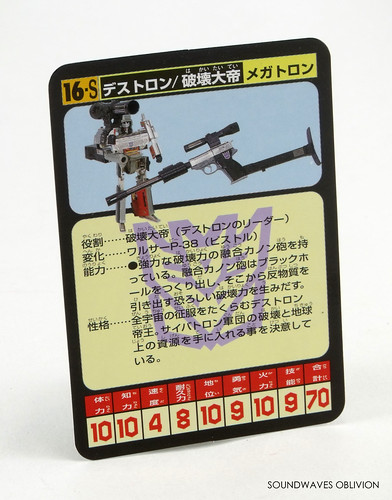 The early 2000's were quite an event for the Transformers, when Hasbro released Beast Machines in 2000, Takara went in the opposite direction and back to their roots by releasing the Car Robots series. Transformer fans also saw Mattel release their Masters of The Universe Commemorative Series and wondered whether any of the classic Transformers would also be reissued. Nowadays these reissues are everywhere but 20 years ago was completely different. Transformer fans would have their answer when Takara started things off by releasing three reissues in 2000 alongside their Car Robots toy line, these were Convoy (Optimus Prime), Hot Rodimus (Hot Rod) and Ultra Magnus all of which were in reproduction boxes. The following year in February 2001, Takara released the original Megatron however they used the original Hasbro box and released the chromed version of Megatron which was unreleased in Japan until now. Takara numbered this figure 16-S (Special) to represent that this version was based on the previously released U.N.C.L.E Special.
In 1984, when Hasbro was re-purposing Takara's original Diaclone and Micro Change series into the Transformers, Hasbro chose the Micro Change MC-13 Gun Robo Walther P-38 U.N.C.L.E Special to be the leader of the Decepticons. The U.N.C.L.E Special came with a silencer, scope and stock as well as a silver gun, sword and bullets. The inner plastic colour of the arms and legs was red and the body of the gun was chromed. Hasbro disabled the firing mechanism and omitted the bullets and removed the sword accessory, presumably for safety standards as the sword was quite sharp.
Takara on the other hand chose the Micro Change MC-12 Gun Robo Walther P-38 Grey Version to be Megatron which was released in June 1985. This version of Megatron only came with the chromed gun and sword but kept its firing mechanism and bullet accessories. The internal plastic of the legs and arms remained the blue of the original Micro Change release. Takara also made a running change with this mould which was not used by Hasbro. This change was to have a full half circle moulding for the "safety catch" and an exposed pin on either side of the gun mode; this change was to strengthen the arm connection.
Takara released this mould again in November 1986 in the "Goodbye Megatron" gift set. This version of Megatron is the mould with the exposed pin and half circle moulding but also included the scope / Fusion Cannon but not the stock or silencer. This time around the internal plastic colour was red matching the Hasbro version.

15 years later when Takara reissued Megatron in 2001, this was a combination of both the Takara and Hasbro versions all rolled into one. The box was a replica of Hasbro's version, the firing mechanism, bullets and the sword accessory were included (as well as all the accessories included from Hasbro's original version) and the mould used was the exposed pin version with half circle moulding for the safety catch. 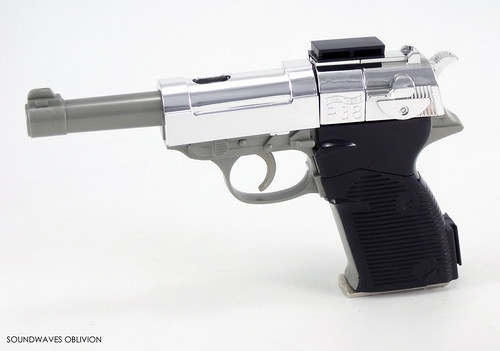 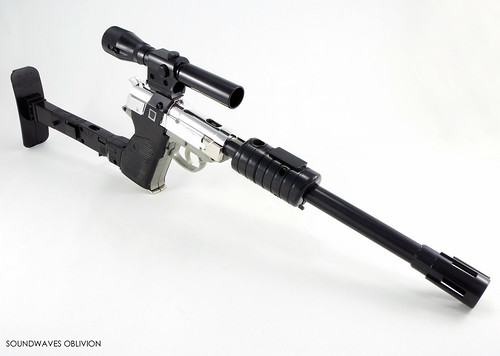 In November 2002, Takara would again release the Megatron 16 Special version in the Transformers Collection series. This figure was identical to the 2001 release other than the packaging. To make it appeal to collectors to double dip, Takara included an additional Destron insignia sticker sheet, a Destron mouse mat and a new translucent purple "Morning Star" weapon which appeared once in the cartoon series. 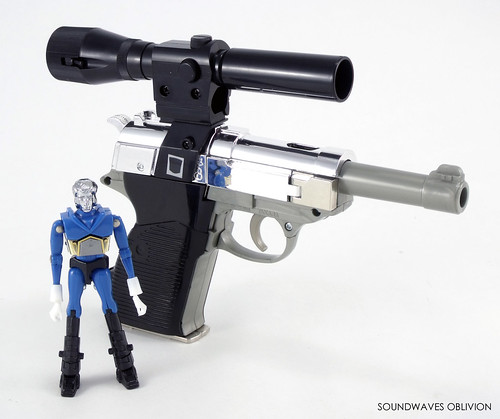 To compliment the release of Megatron in the Transformers Collection series, an exclusive was released through e-Hobby shop in late December 2002. This exclusive figure was called Megaplex and was based on the colour scheme of Takaras original 1985 Megatron. Megaplex was grey rather than chromed and came with all the accessories that Megatron in the Collection Series came with including a recoloured morning star weapon. Megaplex is a clone of Megatron, designed to protect Megatron from would-be assassins. The name Megaplex had previously been assigned in 1997 under the Machine Wars line; this character too was a clone of Megatron. 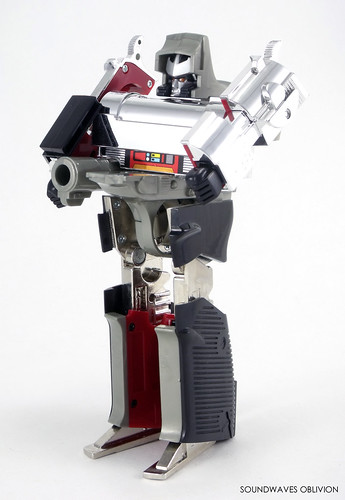 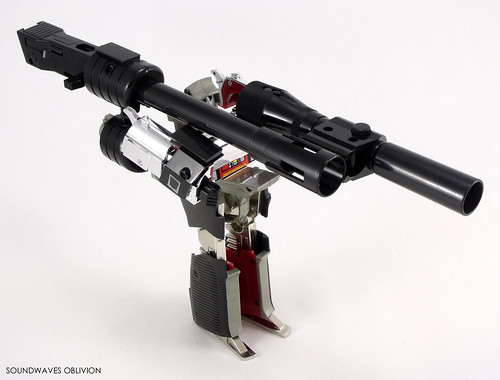 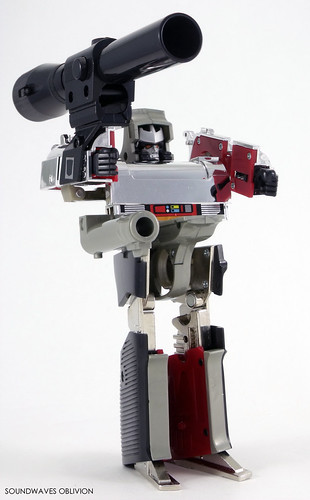 Like the other Transformer Collection series, Megatron comes with pages of information on the cartoon episodes and toys. He comes with Data Files / profiles of Omega Supreme and Long Haul, the Data File of Megatron himself came with Collection Series #2 Prowl. 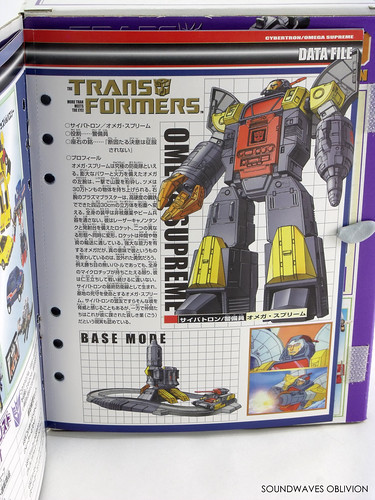 ○ Cybertron Omega Supreme
○ Function: Security
○ Motto: “Unyielding resolve has no conqueror.”
○ Profile:
Omega Supreme is the ultimate defence force. Possessing an incredible amount of strength and firepower, Omegas left arm can crush a mountainside with one blow and he can lift 300,000 tons with his claw. The Plasma Blaster on his right arm can turn a high density 30 cm cubed block of steel into dust. His armoured body is impervious to non nuclear explosives and energy beam weapons. Can simultaneously transform into two forms, a laser cannon tank and a rocket equipped with a launch pad. His rocket is used for transporting companions and supplies. Omega is powerful but it is his courage that truly distinguishes him. Against overwhelming odds in battle he will continue to fight with every last microchip of his being. Designed as the Cybertrons last line of defence, Omega Supreme’s mission is to protect the base. Fellow Cybertrons find him unapproachable but they also recognise the heavy burden placed upon him. 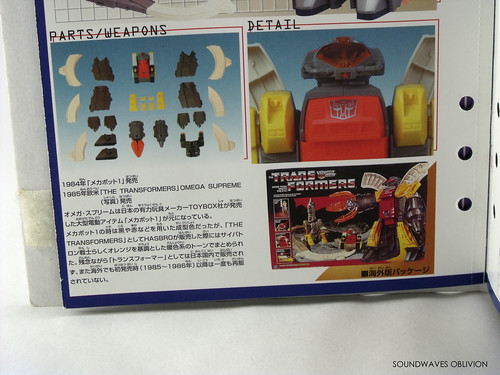 Released 1984 “Mechabot-1”
Released 1985 in Europe and North America “The Transformers” Omega Supreme
Omega Supreme is based on the large electronic toy, “Mechabot-1”, created by the Japanese toy company Toybox. Mechabot-1 was moulded in dark grey and red but when Hasbro sold the figure in The Transformers, the colour was changed to a much warmer tone to match the Cybertron warriors. Unfortunately this was never available in Japan in the “Transformers” line, nor has this been made available overseas since its initial release between 1985 and 1986. 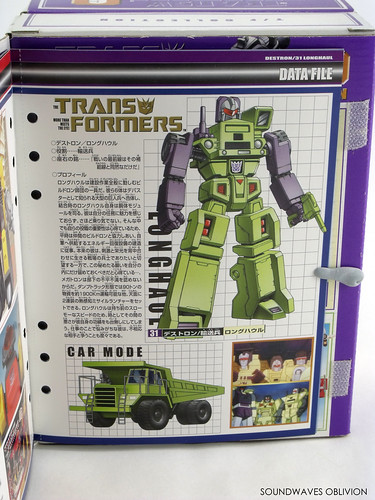 ○ Destron Long Haul
○ Function: Transport Soldier
○ Motto: “A battle front is only as good as its supply line.”
○ Profile
Long Haul is a member of the Buidrons, a team responsible for all the construction work. The 6 of them combine to form the giant warrior Devastar, Long Haul himself forms the body module. Not enthusiastic and is not happy with his role. He does however understand the importance of his job. When not engaged in battle, along with his fellow Buildrons he helps to construct energy recovery equipment to supply the Destrons. Has aspirations to be a soldier on the battlefield as well as craving the glory that comes with it but this is a secret he keeps to himself...Megatron does not entertain grievances from his subordinates. In his dump truck form he can transport 90 tons of materials for 1900 km and can also attach a dual heat seeking missile launcher. Long Haul is slow and sometimes his unhappiness reduces his effectiveness. Worries about his job and fights where he is clearly outmatched. 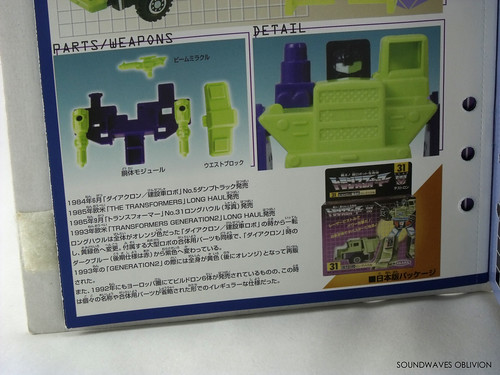 Released June 1984 “Diaclone / Construction Vehicle Robo” No.5 Dump Truck
Released 1985 in Europe and North America “The Transformers” Long Haul
Released September 1985 “Transformers” No.31 Long Haul
Released 1993 in Europe and North America “Transformers Generation 2” Long Haul
Originally entirely red as a “Diaclone / Construction Vehicle Robo”, Long Haul was recoloured to a yellow / green colour. The included parts used to build the large robot were also recoloured. The dark blue “Diaclone” parts (which were changed to red with later releases) were recoloured purple. In the “Generation 2” series in 1993, Long Haul was resold but this time recoloured yellow (and later orange). The 6 Buildrons were also released in Europe in 1992 without names and the parts needed for combination were omitted. 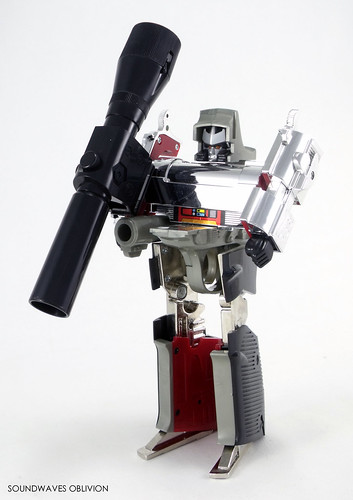 View the full gallery here.
Posted by Jeremy Barlow at 17:14