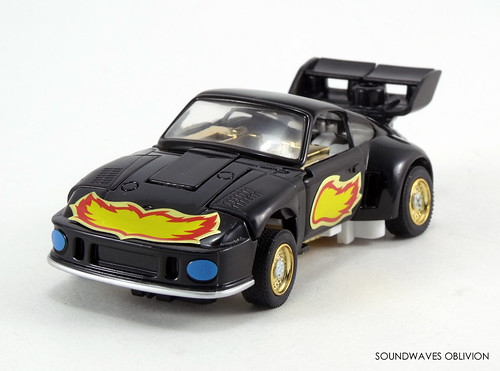 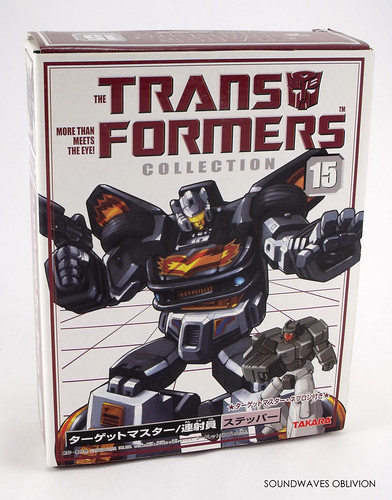 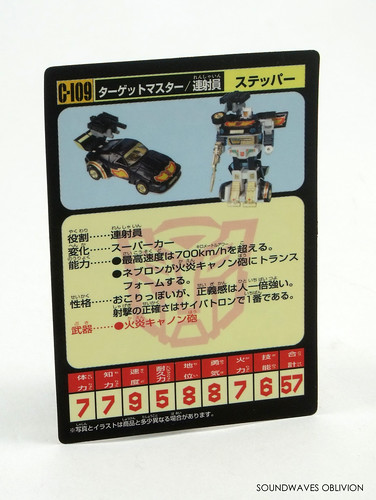 1987 saw the debut of the Targetmasters, a line of robots both Autobots and Decepticons whose weapons transformed into small robots. Each of the small Targetmaster figures had very basic transformations, mainly you folded the robot in half to form the gun mode. Both Hasbro and Takara released the same figures however where Hasbro re-released certain figures from 1986 (Hot Rod, Blurr, Kup, Cyclonus & Scourge) and gave them Targetmaster partners, Takara did not. Takara were going to release Hot Rod and Kup, even giving them numbered designations, however these went unreleased but were eventually released in the Transformers Collection Series in 2004 and 2005 respectively. 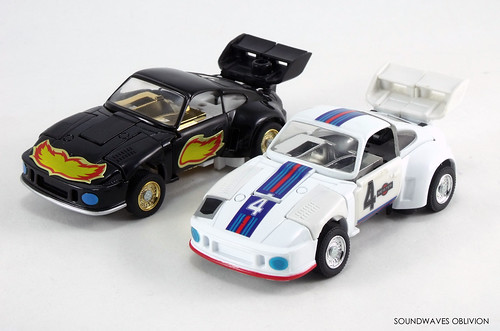 What Takara did do however was to re-purpose two toys from their 1985 line and turn those into new Targetmasters. The figures chosen were Meister (Jazz) and Inferno. Meister had his colours reversed and was given gold highlights instead of chrome and was called Stepper; Inferno was recoloured white and red and renamed Artfire. The small Targetmaster weapons were not new moulds but were reuses from Hasbros western only Decepticon Targetmasters; Steppers partner was called Nebulon, aka Nightstick who came with Hasbro's Cyclonus. Artfire's partner was called Nightstick, aka Fracas who came with Hasbro's Scourge. 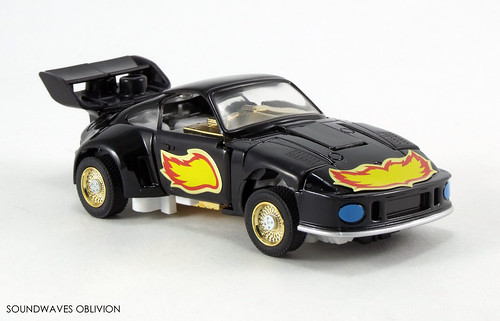 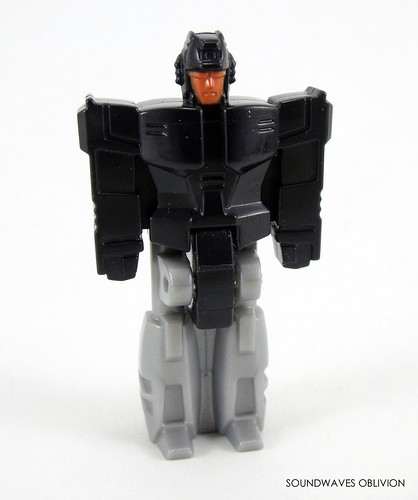 The majority of the original weapons were omitted from Stepper and Artfire. Stepper did not have Meister's hand gun, missile launcher or missiles and Artfire did not have Inferno's missiles. They did however come with a new gun mount to attach the small robots in gun mode. Artfires attached to the fire engine ladder in vehicle mode and Steppers attached to his back in robot mode. Stepper was unable to hold Nebulon in his weapon form as his fist holes were too small. Both Stepper and Artfire were released in December 1987. 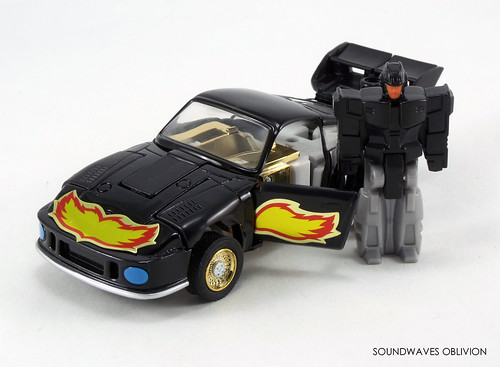 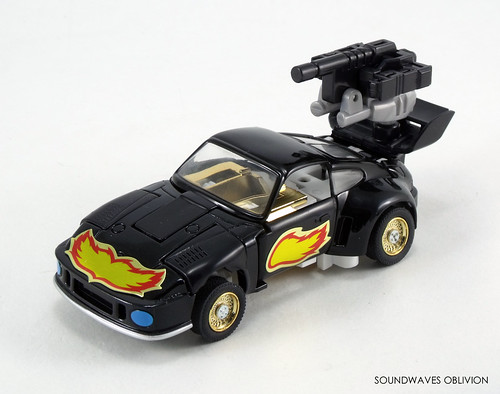 Stepper was released in the Transformers Collection Series in August 2004 and is an upgrade over the original Stepper as well as the initial Meister reissue from 2002. The second release of the Meister reissue corrected the alignment in vehicle mode however the face sculpt was not corrected. The Stepper reissue uses the updated moulding and the face has finally been corrected. As well as coming with the Nebulon Targetmaster and gun mount, Stepper also comes with Meister's hand gun, missile launcher and missiles. Nebulon has also been remoulded so Stepper can hold the weapon mode with his fists. The missile launcher button uses Hasbro's altered mould instead of the original; the comparison can be seen further down the page. 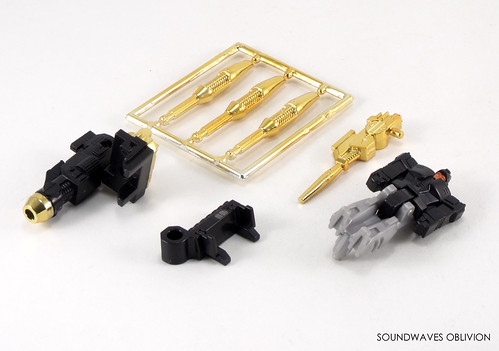 Hasbro also released Stepper in their Commemorative Series line in 2004, however like most of their Commemorative Series releases the made a few alterations. The major change was that Hasbro renamed the character "Ricochet". Ricochet was a name that already existed in the Transformers series and he was also a Targetmaster. Nebulon was also given his original name, Nightstick although this time round he isn't a Decepticon. The original Ricochet was released in 1988 and was a Targetmaster weapon for Quickmix. The reissue of Ricochet came with a matte black handgun, matte black missiles and the modified missile launcher that came with the Commemorative Series Autobot Jazz. Hasbro's reissue did not sell well at all although being a holy grail figure to many fans, however to the wider audience as this character was unseen outside of Japan most people did not have that same nostalgic feeling toward the figure. 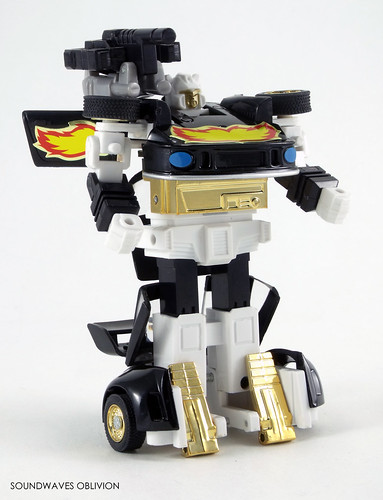 Some may have noticed that the reissue Stepper & Ricochet come with a sticker sheet with Hasbro's Transformers logo. This was also the same for the original Stepper (and Artfire) back in 1987. 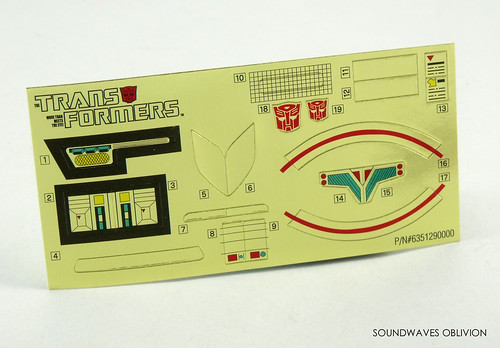 As with all the Transformers Collection series, Stepper comes with Data Files for the Destron Animatron (Predacon) Razorclaw and Stepper. These extended bios are extracts from Marvels Transformers Universe comics, however as Stepper was not originally released by Hasbro he did not have a profile. Its nice to see that Takara put some thought into Steppers extended bio rather than just reprint his tech specs from the character card. Steppers bio references both "Fusion" and "Streak" (Bluestreak). Fusion is a very obscure one-off character from the UK Marvel Comics 1985 Transformers Annual. Fusion appeared in the story "And There Shall Come...A Leader!" where he escorted Bluestreak and was destroyed for his efforts. 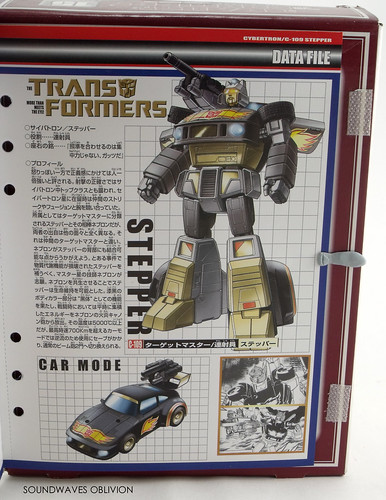 ○ Cybertron Stepper
○ Function: Rapid Fire Attack
○ Motto: “Concentration doesn’t help you aim, it’s guts.”
○ Profile:
Quick tempered but has a strong sense of justice. He is one of the Cybertrons best marksmen; on Seibertron he used to compete with his friends Streak and Fusion. As a Targetmaster Stepper is partnered with Nebulon and the pair's backgrounds could not be more different. Unlike fellow Targetmasters, Nebulon also attaches to Stepper’s back. After an incident on Planet Master left Stepper’s metabolic functions critically damaged, the engineer Nebulon volunteered to help. Now joined in symbiosis, Nebulon is Steppers life support. His jet black coloured body functions as a “Blackbody*” and collects energy when he is not engaged in battle and his Nebulon Flame Cannon fires the accumulated energy. Temperatures of the energy released can easily exceed 5000oC; however in car mode as he travels at speeds of 700km/h he won’t use this weapon due to the air flow and will instead switch to his two Beam Cannons.

*Blackbody, in physics, a surface that absorbs all radiant energy falling on it. The term arises because incident visible light will be absorbed rather than reflected, and therefore the surface will appear black. Reference: https://www.britannica.com/science/blackbody 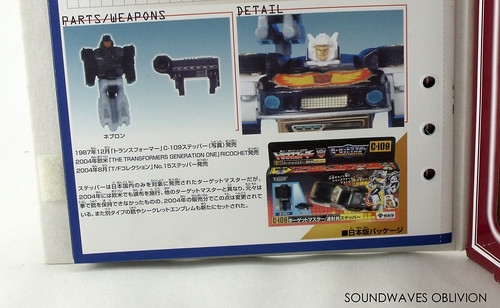 Released December 1987 “Transformers” C-109 Stepper
Released 2004 Europe and North America “The Transformers Generation One” Ricochet
Released August 2004 “Transformers Collection” No.15 Stepper
Stepper is a Targetmaster who was only released in Japan but in 2004 it was finally released in North America and Europe. Originally, unlike other Targetmasters, the gun would not fit in Steppers fist but this was changed for the 2004 release. Additionally the updated release comes with extra weapons and a secret emblem**. 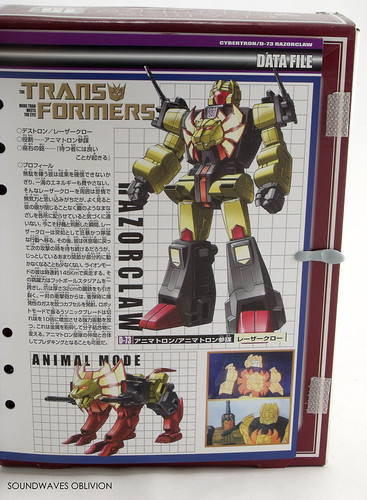 ○ Destron Razorclaw
○ Function: Animatron Staff Officer
○ Motto: “All good things succumb to those who wait.”
○ Profile:
Despises waste and unless he is sure of the outcome he will not spend a drop of energy. Many would assume he is lazy and disinterested but if you look closer his eyes never close and are constantly shifting their steely gaze. When he judges the moment is right, Razorclaw will suddenly explode into furious, ferocious action. Afterwards he will return to rest and wait until the next attack, it is not uncommon that his joints would seize after long periods of inactivity. In lion mode he can run 145km/h. He can leap as far as a football field and his claws can tear 32cm thick steel. Uses a pair of Concussion Blasters which fire capsules that explode on contact releasing a volatile gas. In robot mode he wields a Sonic Sword which emits powerful vibrations which enhances its sharpness tenfold. The sword shatters the molecular structure of metal upon contact. Combines with the other Animatrons to form Predaking. 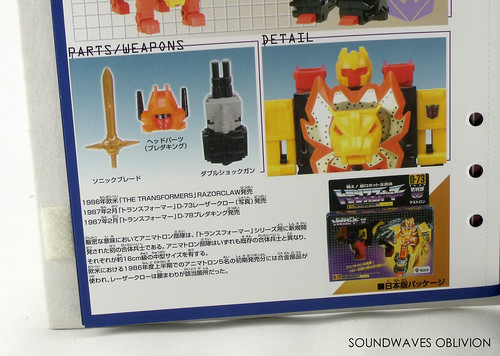 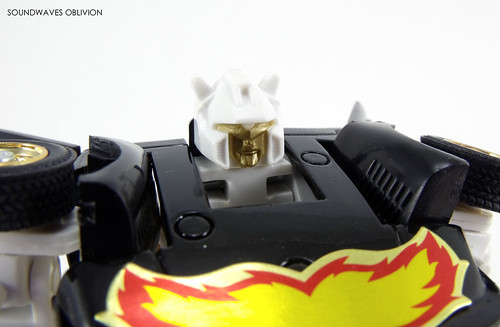 View the full galley here.
Posted by Jeremy Barlow at 19:07