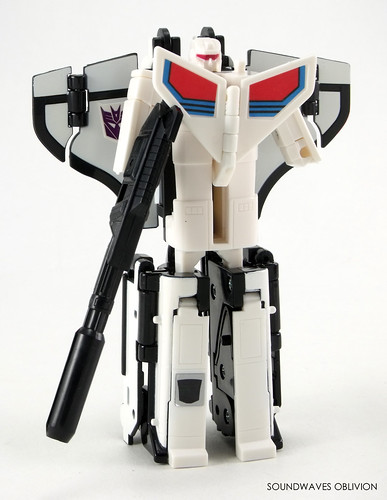 Collection 11
48 Destron Transport Commander Astrotrain
Function: Transport Commander
Transformation: Steam Locomotive / Shuttle
Ability: Depending on the situation he can triple change into a steam locomotive or a shuttle. Has a powerful Ionic Displacer Rifle.
Character: Delights in causing confusion for the Cybertrons. Physically strong in robot mode; once he is on a rampage he is out of control.
STR…9; INT...7; SPD...10; END...7; RNK...6; CRG...7; FPR...6; SKL...8; TTL...60 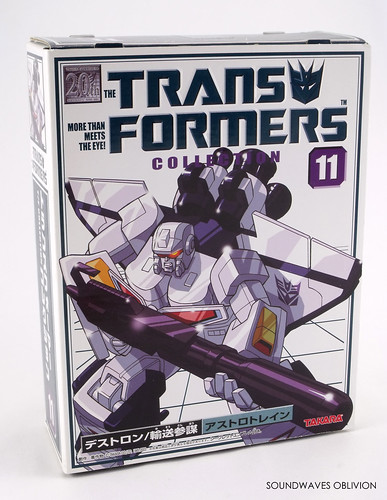 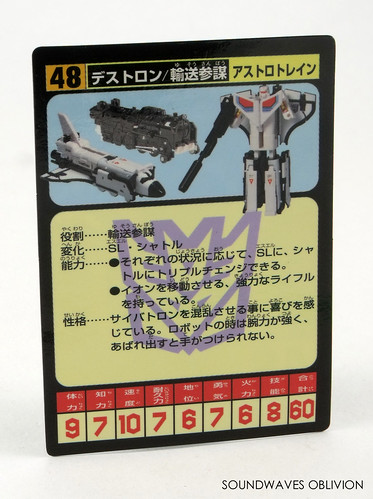 Both Blitzwing and Astrotrain were designed by Ōno Kōjin for the Diaclone series but only Blitzwing made the cut, possibly the Astrotrain mould was going to be produced in the later Diaclone series before the focus turned to the Transformers. Ōno Kōjin stated in an interview for the 2001 Transformers Generations book that of all the figures he had a hand in designing (and there are a lot such as the Dinobots, Constructicons, Powermaster Optimus Prime, Super Ginrai), both Blitzwing and Astrotrain are his finest achievements. 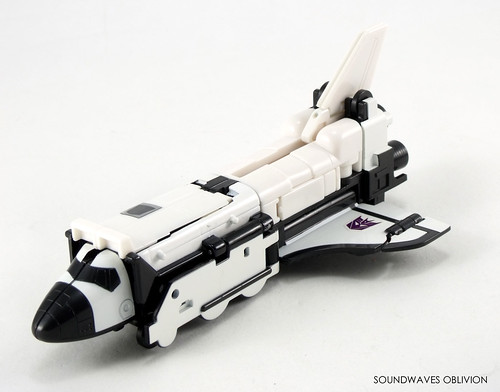 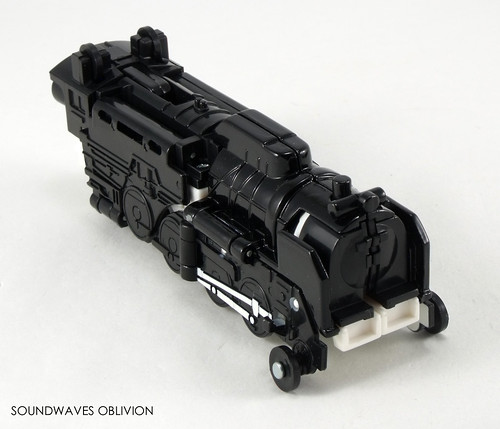 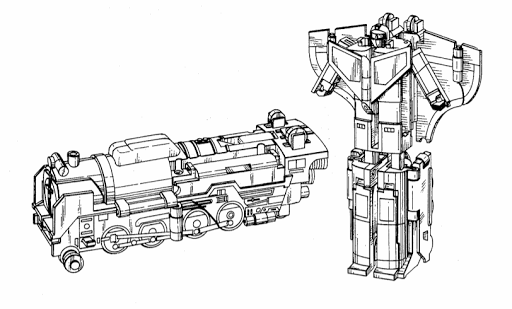 The patent for Astrotrain shows a very different head to the final version. The colouring of Astrotrain was also a very changable aspect for the figure. Ōno Kōjin stated in an interview that his intended colour was a white space shuttle and a black train (which is what Takara ended up releasing initially). Hasbro however wanted different colours to show that this character was a Decepticon so purple and grey was used instead.
A non-transformable version of Astrotrain first appeared alongside Blitzwing in the 1985 Toy Fair magazine holding Blitzwings weapons. One thing to note is the dark grey colour scheme which matches the colour scheme Sunbow used for the cartoon series. From this model it would appear that Astrotrain's arms would also be extendable, whereas the final version did not have this feature unfortunately. This prototype version of Astrotrain would also appear in the UK's 1985 Transformer catalogue that was packaged in with the toys, the catalogue printed the exact same photograph from the Toy Fair magazine. A different photograph set of the prototype Astrotrain featured in the 1985 North American Transformer catalogue, still holding Blitzwings weapons. This Astrotrain would also appear in the European 1985 MB toy catalogue, this time with different stickers on the chest shield and is still holding a Blitzwings weapon albeit this time a missile. One additional thing to note about the MB dealer catalogue is that the Blitzwing featured is actually the Diaclone version.
When Hasbro finally released Astrotrain he came in a much lighter grey colour scheme in shuttle and robot mode and a much darker purple for the train mode. Astrotrain would also have his own gun which is almost as long as the figure itself.
In November 1985 Takara released their own version of Astrotrain complete with different box art. This version was more inkeeping to Ōno Kōjins initial design. As well as a different colour scheme, this Astrotrain came with a completely different sticker set, even including "NASA" for the shuttle mode. Takara would eventually release the Hasbro version of Astrotrain the following year in October 1986.
Hasbros version of Astrotrain was re-released in 1991 under the Transformers Classics series in Europe and then Takara would release the white and black version of Astrotrain in December 2003 under the Transformers Collection series. This version of Astrotrain was a nice representation of Takaras initial version and certainly made it attainable to wesern collectors without paying out a small fortune. The white plastic almost has a reddish / pink tint to it, certainly different to the original vesion. Another difference from the original is the stickers have been slightly altered other than the sticker placement on the sheet, "NASA" has been changed to "ASTR". 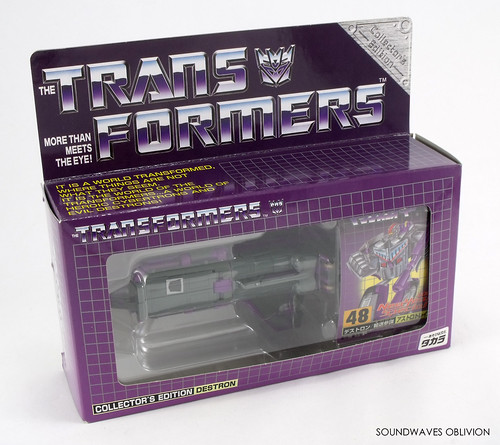 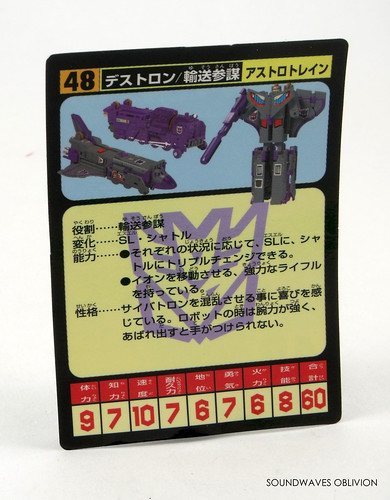 Considering e-Hobby had been releasing the Micro Change / Diaclone colour variations alongside the standard reissues in their Collectors Edition range, for Astrotrain the prototype colours were chosen. In January 2004 as a "2004 New Year Special", Astrotrain Proto Colour Version was released. Unlike other e-Hobby releases, this version was not a new character. e-Hobbys release looks quite close to the actual prototype Astrotrain, the grey colour is close but the purple on e-Hobbys version is much lighter than the original. There is, like other G1 figures a knock-off of the Astrotrain Proto Colour Version which comes in the classic Hasbro packaging, the toy inside appears to be near identical to the e-Hobby version. 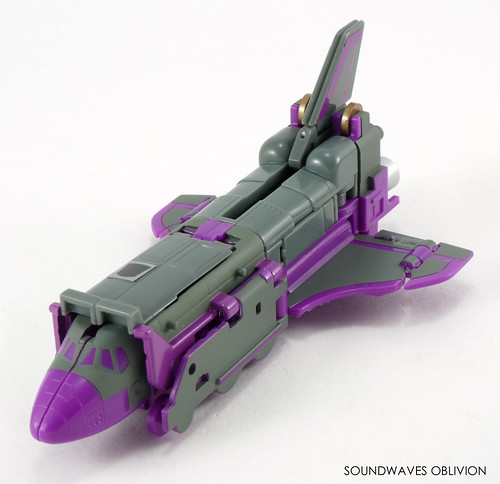 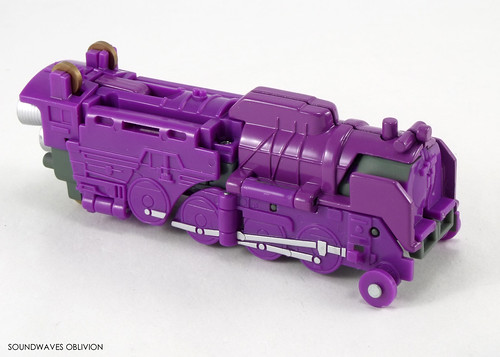 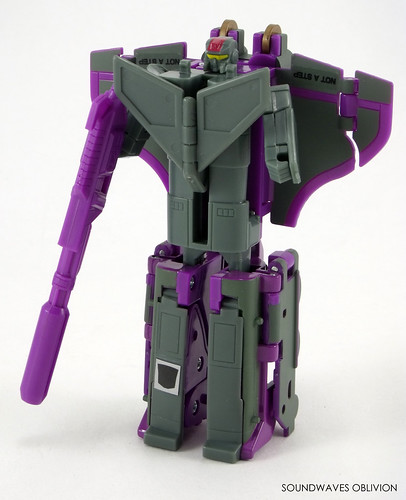 Hasbro would go on to release their own version of Astrotrain in the Commemorative Series line in 2005 which was identical to Takaras Transformers Collection series version. This version was an online Hasbro Toy Shop exclusive, limited to 3000 pieces. Inside the box flap shows other reissues "Side Swipe", "Autobot Skids" and "Ricochet with Nightstick". This version of Astrotrain would be released again in Asia in 2012, the box would be near identical to the 2005 release but the name was changed to "Decepticon Astrotrain". The inside of the box flap for the 2012 release shows Optimus Prime, Ultra Magnus and Soundwave who were also released in Asia.
A much different Astrotrain would be released in 2015 in the Platinum Edition Decepticon Triple Changers box set. This set was an Amazon.com exclusive and included Blitzwing and Astrotrain, both of whom had a very different colour scheme. Blitzwing was based on the Decepticon Duocon Flywheels, Astrotrain however is seemingly based on Machtackle, an Autobot from the 1989 Transformers Victory series. 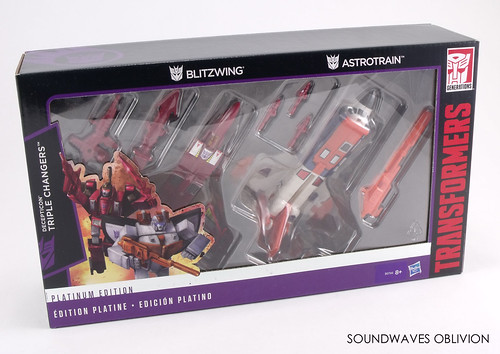 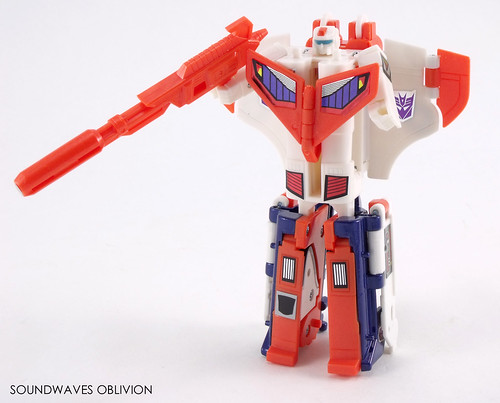 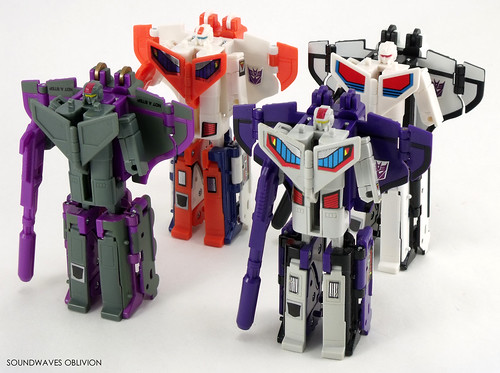 The Transformers Data Files that come with the Transformers Collection Astotrain include Powerglide, Jaguar and Astrotrain. Below are translations from the included pages:- 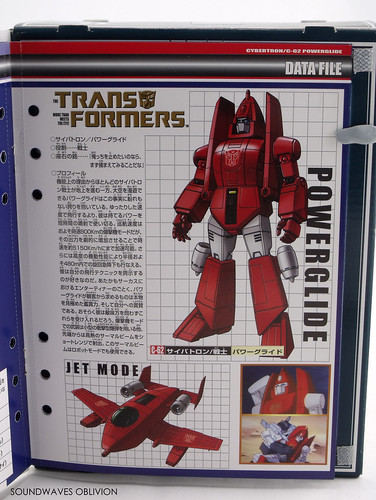 ○ Cybertron Powerglide
○ Function: Warrior
○ Motto: “To stop me, you have to catch me first.”
○ Profile:
While most of the Cybertrons have to travel about on the ground, Powerglide can take to the skies and explore, something which he is very proud of. Releases brief bursts of power to make up for his slow speed. In his bomber mode his cruising speed is around 800 km/h but by increasing his output he can dramatically accelerate to 5150 km/h. With his impressive maneuverability he can complete an aerial loop perpendicular to the ground within a radius of 480 m. Enjoys showing off his flying skills. Just like an entertainer at a circus the one thing Powerglide wants is appreciation and praise from his audience. He’ll accept this from anyone, friend or foe alike. In bomber mode h carres small concussion bombs and he can fire a short range thermal beam from his nose module. He can also use the thermal beam in robot mode. 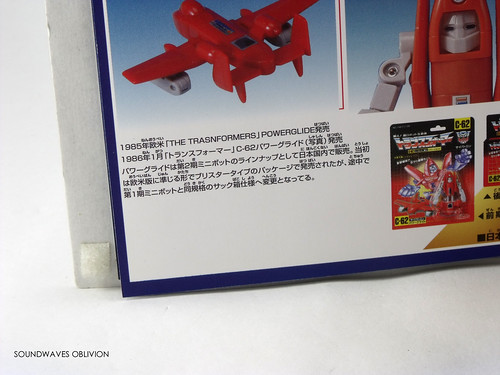 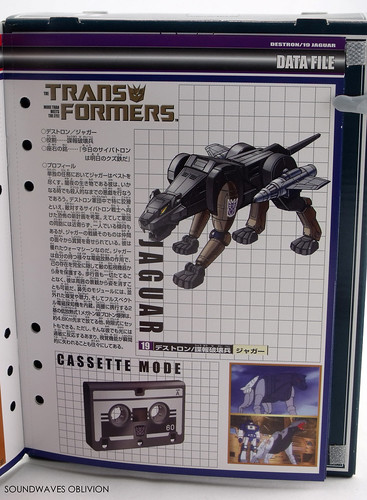 ○ Destron Jaguar
○ Function: Intelligence Destruction Soldier
○ Motto: “Today’s Cybertrons are tomorrow's scrap metal”
○ Profile:
Jaguar operates best alone. A creature of the night and will carry out his murderous mischief at that time. One of the most cunning Destrons, quick to devise new hostile strategies to use against the Cybertrons. Detached from his comrades preferring his own company, Jaguars deeds however command respect from fellow Destrons. An excellent war machine. Jaguar can render himself invisible from enemy surveillance due to his internal electromagnetic radiation. Walks without making a sound and can disappear from sight. His built in nose module gives him an exceptional sense of smell, hearing as well as full-spectrum electromagnetic wave detection. Carries two low radiation type 1 megaton class proton bombs on his waist. They have a range of 4.8 km or can be set off with a timer. Overly sensitive to light and can be temporarily blinded by it. 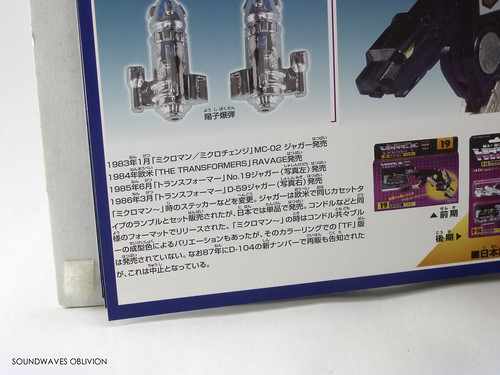 -Released January 1983 “Microman / Micro Change” MC-02 Jaguar
-Western release in 1984 “The Transformers” Ravage
-Released June 1985 “Transformers” No.19 Jaguar
-Released March 1986 “Transformers” D-59 Jaguar
The timing decals only featured minor changes from the Microchange version. In the west Jaguar was sold in a set with Rumble but in Japan it was sold individually like Condor. There was also a colour variation available in the Microman line but this was not released in the Transformer series. In 1987 Jaguar was going to be re-released with the number designation D-104 however this was cancelled. 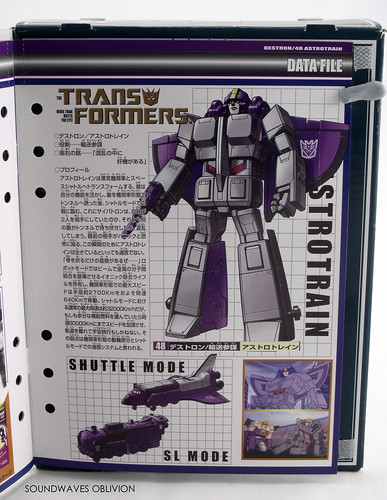 ○ Destron Astrotrain
○ Function: Transport Commander
○ Motto: “In confusion there is opportunity.”
○ Profile:
Astrotrain transforms into a steam locomotive and a shuttle. Uses his abilities to his full advantage; lures enemies into railroad tunnels in locomotive form then changes to his shuttle mode to attack. This confuses the Cybertrons making them think they are either against two enemies ambushing them in the tunnel or just the one. That moment where his opponent realises their mistake and falls into panic and fear is what Astrotrain lives for. “It’s worth the effort……”. In robot mode he carries an Ionic Displacer Rifle which breaks down the molecular bonds of metal with its beam. His maximum range in locomotive mode is 2,700 km and has a maximum speed of 640 km/h. His normal maximum speed in shuttle mode is 32,000 km/h but if he carries extra fuel he can reach speeds of 80,000 km/h. Can achieve planetary orbit and space travel under his own power. His weaknesses are his wheel assembly in locomotive mode and his communications system in shuttle mode. 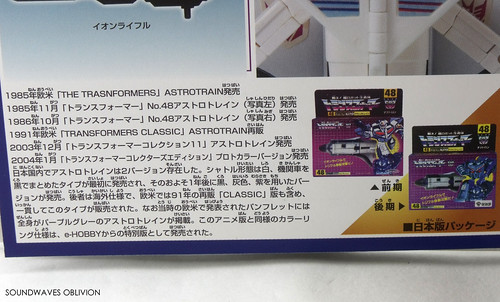