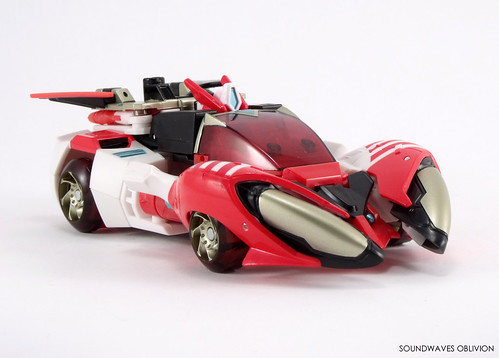 GC-10 CYBERTRON Sonic Commander Nitro Convoy
“Speed is truth, speed is justice!”
GALAXY CONVOY FILE
Racing gives him purpose and on planet Speedia, Nitro Convoy’s speed is unmatched. Due to his remarkable abilities he reigns as Speedia’s leader and all its residents admire and respect him. Unfortunately he is only interested in pursuing his speed and is not seeking universal peace which the Planet Force will deliver. But I believe he is destined to join the Cybertron’s and help guide the universe.
PWR...9; INT...9; SPD...10+; END...8; RNK...10; CRG...8; FPR...8; TECH...9; TTL...71 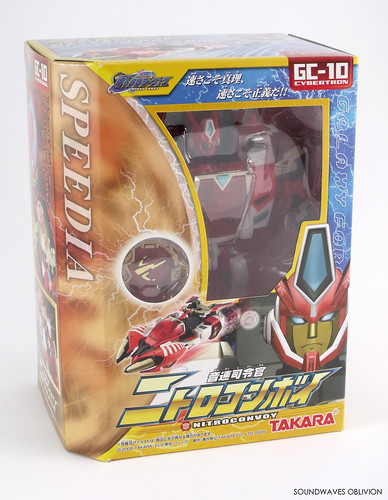 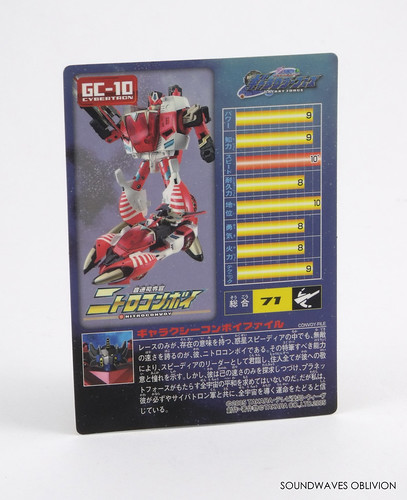 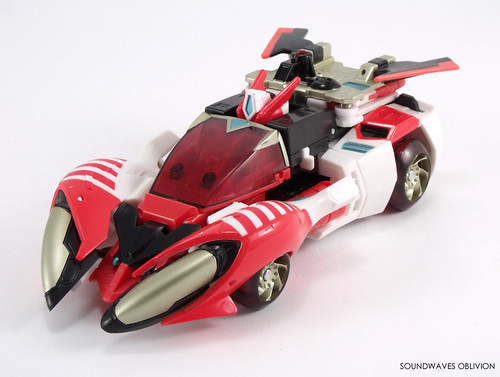 In Japan, Transformers Galaxy Force (aka Transformers Cybertron) was not a continuation of Micron Legend and Super Link but was a stand alone series. Hasbro however intended the series to be the last chapter of the Unicron Trilogy and subsequently modified the storyline to make it fit in the series. 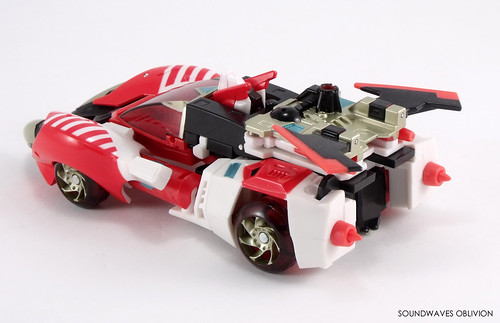 The main gimmick associated with Galaxy Force are the "Force Chips" (aka Cyber Key) which are coloured translucent "keys" which unlock spring loaded weapons on the Transformers. Each of the Force Chips bear the marking of their planets logo, these include Seibertron (Cybertron), Speedia (Velocitron), Earth, Animatros (Jungle Planet), Gigalonia (Giant Planet), Planet X and a special Chip for Vector Prime. 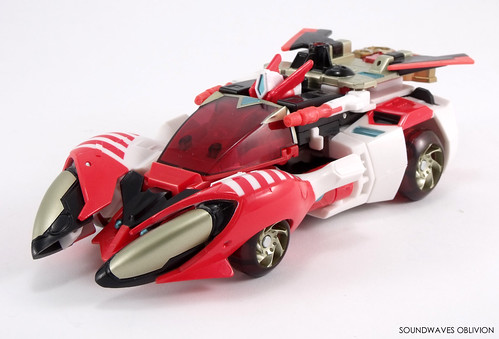 The four main planets (not including Seibertron) had their own leader who was a Convoy and the leader of Speedia is Nitro Convoy. Unlike previous versions of Convoy who shared characteristics with the original G1 Convoy (Optimus Prime), these other four Convoys looked very different. Hasbro renamed them for the Transformers Cybertron series and Nitro Convoy became "Override". 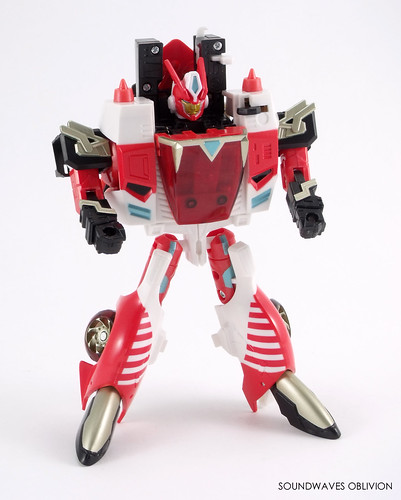 Nitro Convoy comes packaged in robot mode and is coloured white, red and black with gold highlights. Robot mode is top heavy so I found stability to be one of the negatives with this figure. I believe the head can turn but I didn't manage it nor want to force it. Posability for a figure from 2005 is okay, its just getting the figure to stand up thats the problem. 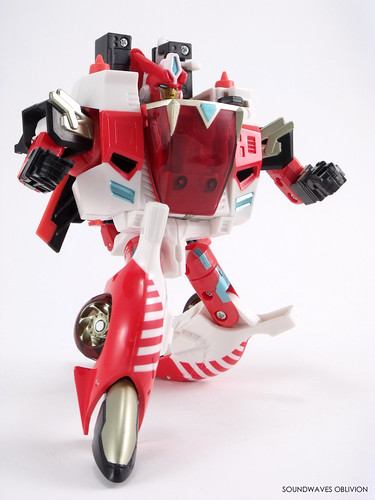 The weapon is stored on the back of the robot mode but you have to unclip the backpack to remove it and attach the backpack to a different peg once the gun is removed. The gun can be held by either hand and the Force Chip will spring two barrels out. It does exactly the same in vehicle mode. 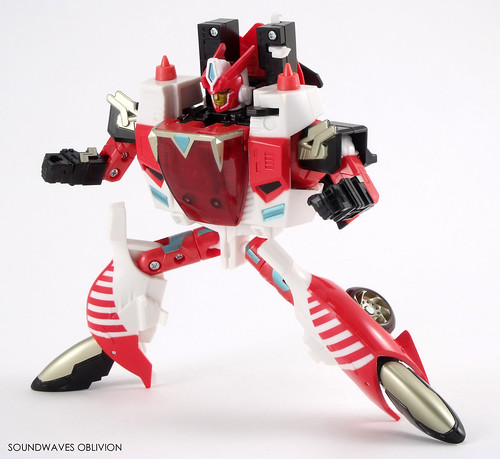 Transformation is different as this features an auto-transform gimmick. You have to transform the hips and legs attaching them to the backpack section then fold the canopy forward and fold the arms back. These are held by clips and pressing the black section on the front of the car nose will transform it back to robot mode. 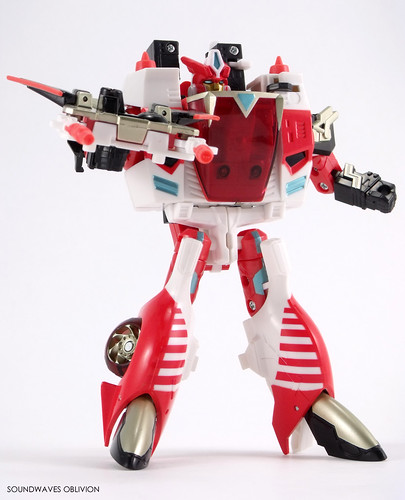 In vehicle mode Nitro Convoy is a futuristic race car. The translucent red canopy reveals two seats and the main weapon which forms a part of Nitro Convoys car mode is situated on the back of the vehicle mode. Inserting the Force Chip flips out the two gun barrels for an attack mode. 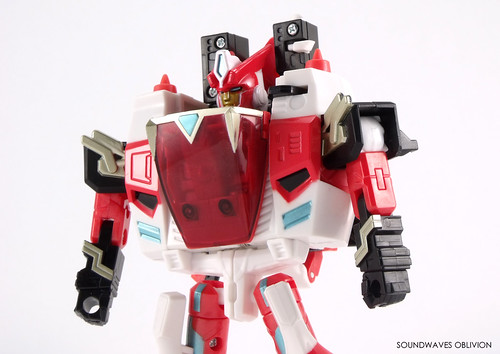 In the October 2005 edition of the Japanese "TV Magazine" was a mail-away form you could clip out and send payment for a special recoloured version of Nitro Convoy, a Destron clone called Dark Nitro Convoy which was limited to 2,000 pieces.
The updated box quote for Dark Nitro Convoy states:
"Clad in darkness my speed exceeds the speed of sound!"
The blurb from the TV Magazine reads:
A new battle has broken out on Planet Speedia! Using dark power, Master Megatron has created Dark Nitro Convoy! "I'm the fastest in the universe; I'll beat Nitro Convoy and dominate Speedia!" 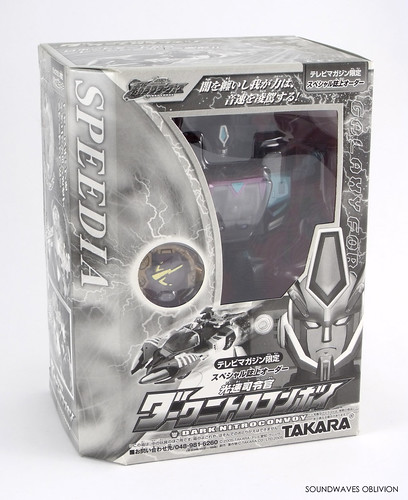 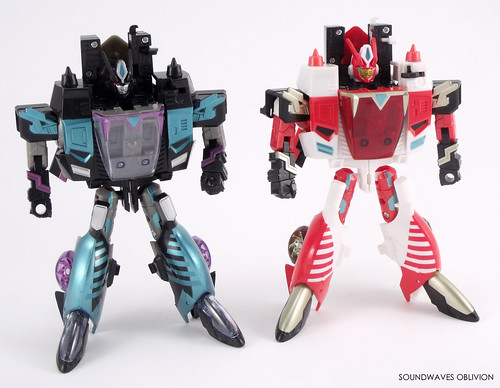 Dark Nitro Convoy comes in a grey scaled version of the standard box and even comes with the standard instruction sheet. This figure did not come with an individual character card. Dark Nitro Convoy features the now familiar "Black Convoy / Nemesis Prime" colour scheme being predominantly black and teal with purple highlights. 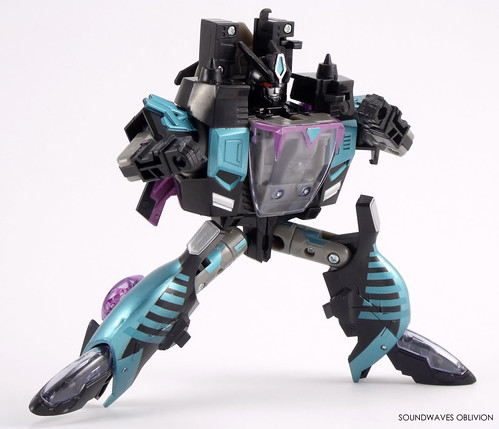 I do prefer this colour scheme over the standard GC-10 release and another stand out feature are the translucent headlights. Dark Nitro Convoy comes with a special translucent light purple Force Chip which features the Speedia symbol. 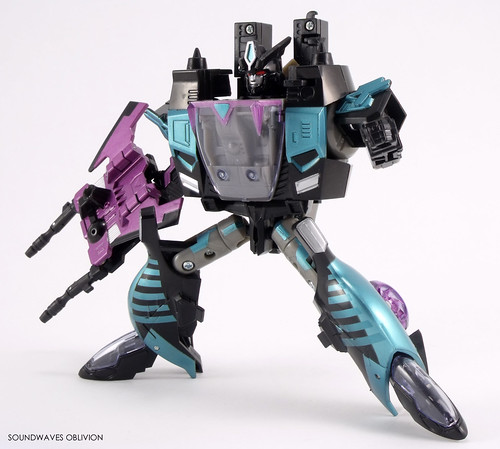 Overall Nitro Convoy is a decent figure with a stand out transformation but if I was collecting Galaxy Force again I would pass on this figure. 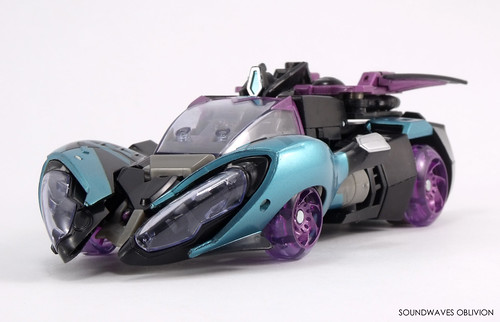 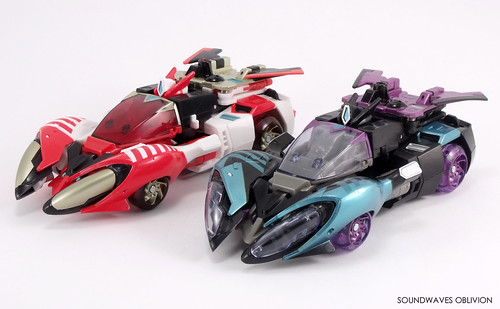