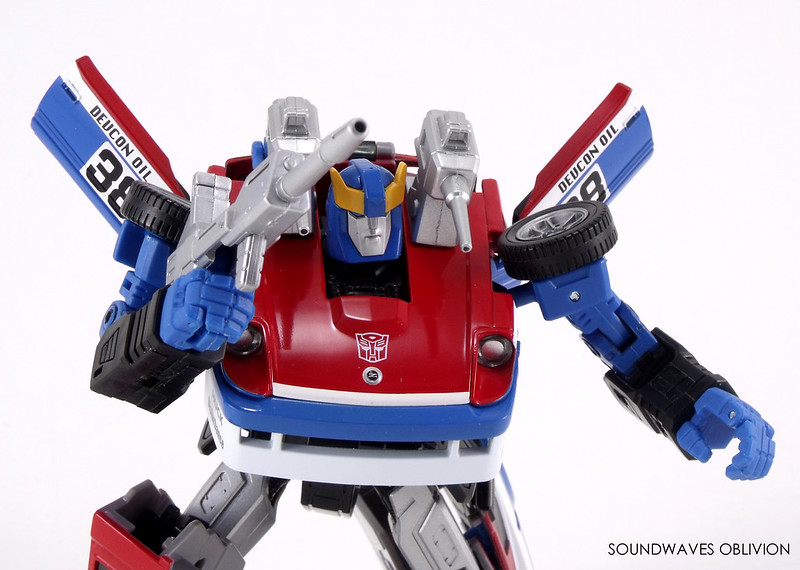 Profile (Translated from the Trading Card)
MP-19 Cybertron Tactician / Smokescreen
Function: Tactician
Motto: "A look can be deceiving; a touch can be lethal."
Profile:
Specialises in diversionary tactics, dividing and isolating the enemy. On the battlefield he leads the enemy astray so they don't discover the Cybertron’s strategy. Even adopts a poker face during friendly conversations with his comrades, never revealing his true intentions. He is however charming, affable and trusted by his peers. In vehicle mode he emits a thick black smoke that sticks to metal.
STR...4; INT...8; SPD...7; END...5; RNK...6; CRG...8; FBL...6; SKL...9 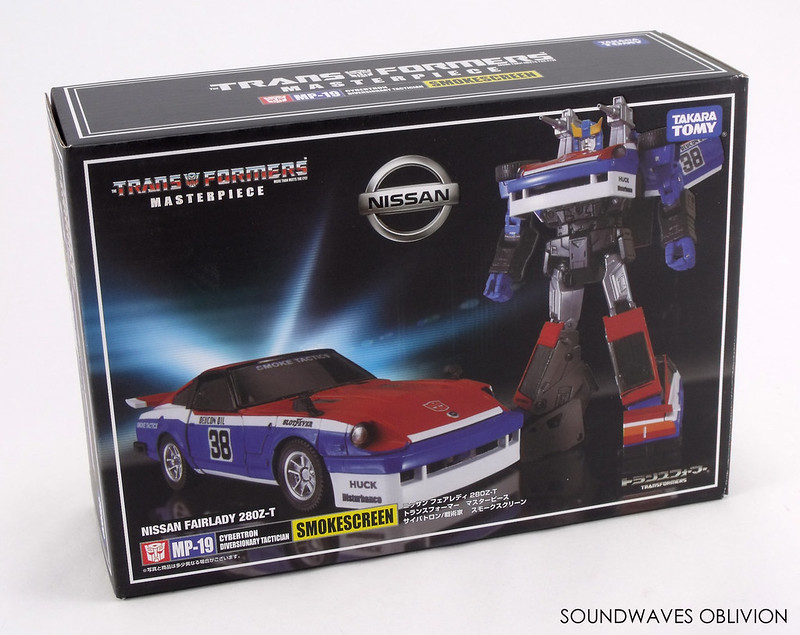 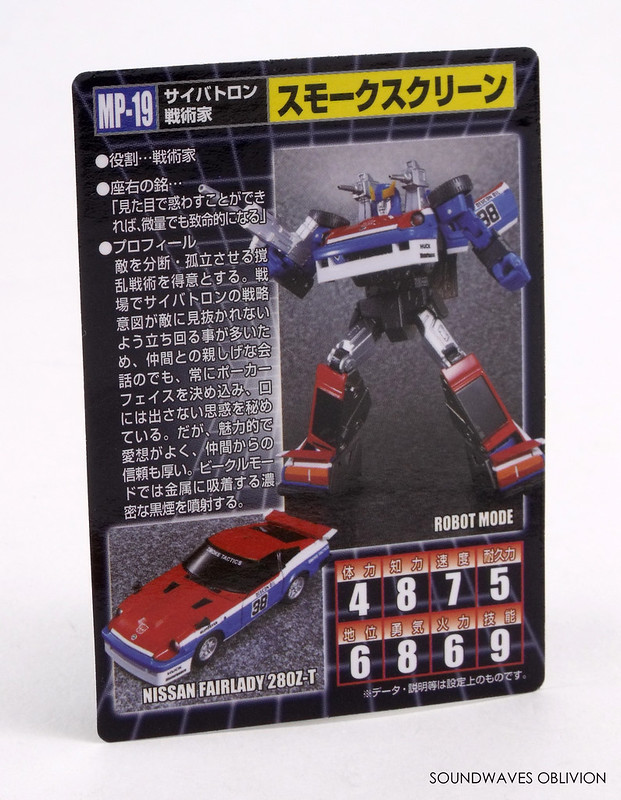 Released December 2013 for 5,800 Yen, MP-19 Smokescreen was the last of the Fairlady cars to be released (not counting exclusives or the anime recolours). Smokescreen is also the most different in both modes out of the 3 main Fairladys as he has features quite an extensive retool which includes a rear spoiler, front air dam, new head, new shoulder launchers, new upper arms and a new gun. 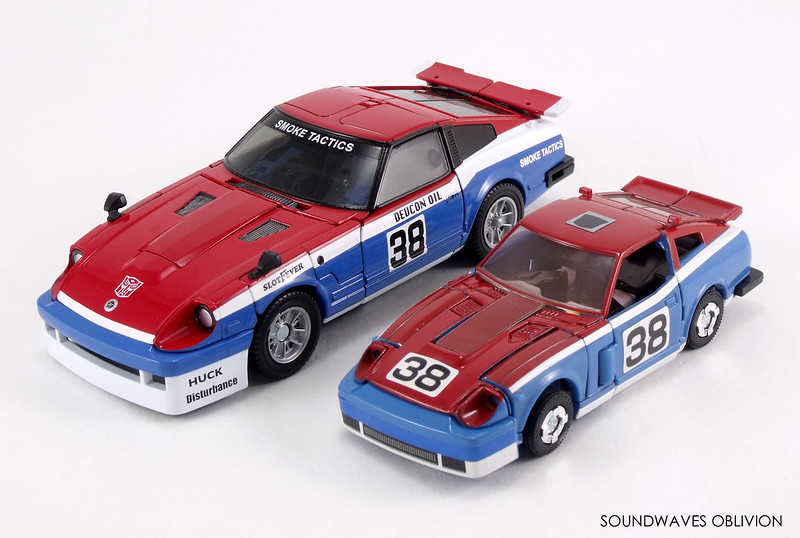 In vehicle mode Smokescreen looks quite close to the 1982 Electramotive Datsun on which it's based and although Smokescreen does feature extra moulded detail, unfortunately Takara Tomy did not include the wider rear wing (fender) as seen on the original but this would not have been cartoon accurate. The roof also features the T-Bar pattern whereas the real world version and the original Diaclone / Transformer version featured a smooth roof.


As mentioned above Smokescreen is based on the Electramotive Datsun 280ZX Turbo which won the 1982 IMSA (International Motor Sports Association GTO (Gran Turismo Omologato) Championship. The American driver, Don Devendorf an electrical engineer had founded the race team Electramotive Engineering in 1975 with friend John Knepp (1942-2017). This car inspired Takara to release a very similar model in their Diaclone toyline in May 1983 simply called "Fairady Z Racing". This release made alterations from the real world version a few which include: the car number switched from 83 to 38, the Bosch logo on the air dam was replaced with the text "280 ZX Turbo" and the "Electramotive" text in the windscreen was replaced with "Real & Robo".

When the Fairlady Z Racing was released in the Transformers toyline in 1985 a lot of the text on the stickers were removed making the car mode look quite plain in comparison with the Diaclone version. The Masterpiece version, although not completely cartoon accurate, includes some "sponsorship" and text on the car mode and this certainly helps this look like a real race car. Some of the text does relate to Smokescreens exploits in the cartoon series such as the "Devcon Oil" on the car door (instead of the name Don Devendorf). Devcon is the Autobot bounty hunter Smokescreen met in episode 46 "The Gambler". Over the front wheels instead of "Goodyear" it says "Slot Fever", another reference to "The Gambler". Over the rear wheels instead of "Electramotive" it says "Smoke Tactics" and on the air dam "Huck and Disturbance" replaces "Bosch and Valvoline". Incidentally the one off alien character "Bosch" also appears in "The Gambler", unrelated to the German company. 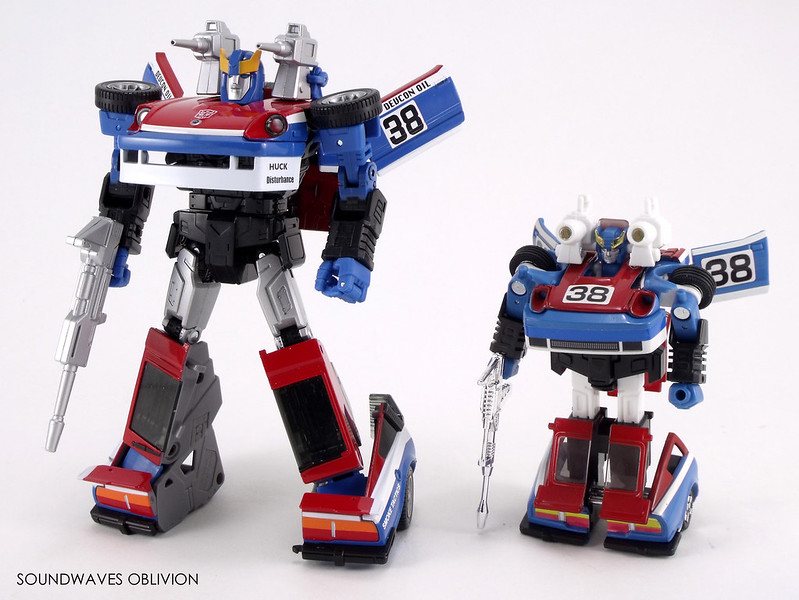 Transformation to robot mode is similar albeit the same as MP-17 Prowl and MP-18 Streak, however as the top of the arms have been retooled to accommodate the tyres on the top of Smokescreens shoulder rather than behind, the transformation differs slightly here. In robot mode Smokescreen is not entirely cartoon accurate seeing as the cartoon model is "thicker" in appearance with quite a long "backpack". However an attempt was made such are the aforementioned shoulder tyres, new head sculpt and the built-in shoulder launchers have been removed and replaced with flip out tabs where the new Jamming Launchers slide onto. The handgun is also a new mould replicating the simplified design seen in the cartoon. 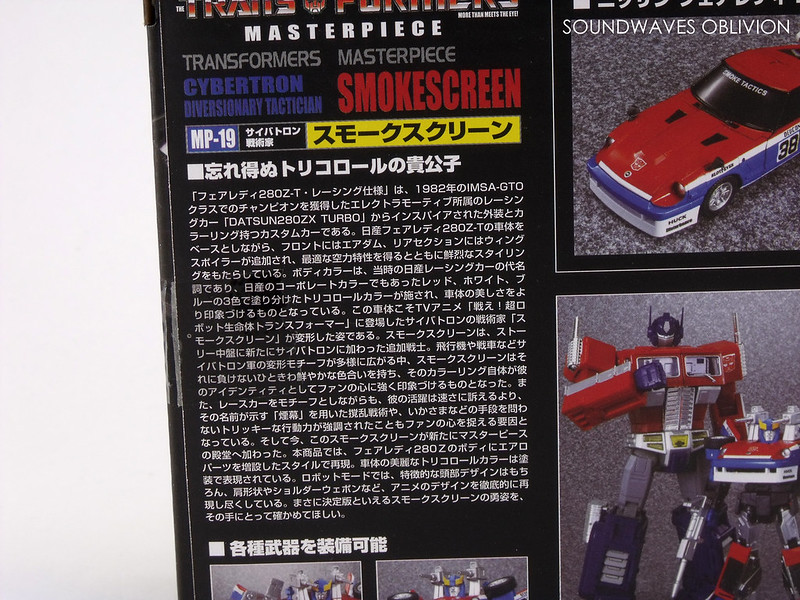 ■An unforgettable tricolour prince. (Translated from the back of the box)
The “Fairlady 280Z-T Racing Specification” is a custom car with an exterior inspired by the Electramotive Datsun 280ZX Turbo that won the 1982 IMSA-GTO Championship. It is based on the body of the Nissan Fairlady 280Z-T with an added front air dam and a wing spoiler on the rear optimising its aerodynamics as well as providing spectacular styling. The colour of the bodywork was synonymous with Nissan at the time as the red, white and blue were Nissan’s corporate colours. Being painted in these 3 colours makes the car even more beautiful to behold. This car appeared in the cartoon series “Fight! Super Robot Lifeform Transformers” as the alternate mode of the Cybertron Tactician, Smokescreen. Smokescreen was an extra warrior who joined the Cybertrons in the middle of the series. Amongst the other newcomers to the Cybertron ranks such as tanks and airplanes, Smokescreen vivid colouring helped him stand out and win over the fans. Despite having a race car as his alternate mode Smokescreen did not just rely upon his speed but also his tactical skill with the use of his smoke screen, and it was his deceptive manner that captivated fans. Now Smokescreen has been added to the Masterpiece lineup. This product features faithfully reproduced aerodynamic parts onto the body of the Fairlady 280Z as well as the beautiful tricolour bodywork. The robot mode features his characteristic head design and the shoulders and weapon have been reproduced in his cartoon appearance. This valiant figure of Smokescreen is a sure purchase. 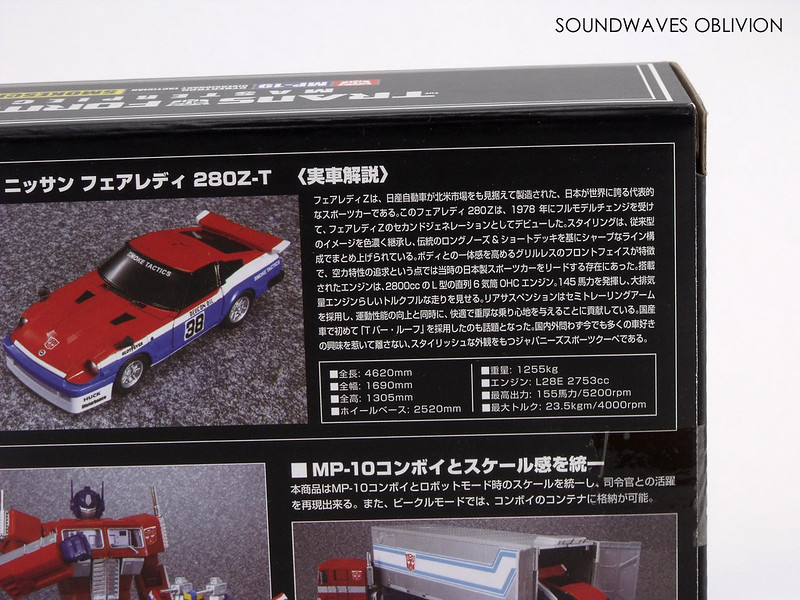 Nissan Fairlady 280Z-T (Actual Car Notes) (Translated from the back of the box)
The Fairlady Z was built with a view to capture the North American market, a sports car of which Japan is proud. The Fairlady Z 280Z received an overhaul and debuted in 1978 as the second generation of Fairlady Z. Its overall style has inherited the traditional image of the long nose and short deck with a sharp edged look. The front face of the grill enhances the integration with the car body and its aerodynamic characteristics made this a leading sports car in Japan at the time. The installed engine is a 2800cc L-type inline 6 cylinder with an overhead camshaft engine. Delivering 145 horsepower it is almost like driving a car with a much larger engine. Its rear suspension uses a semi-trailing arm which improves performance and comfort. This became the first domestic car to adopt the “T-bar roof”. A Japanese sports coupe which has attracted the interest of many car lovers both domestically and overseas. 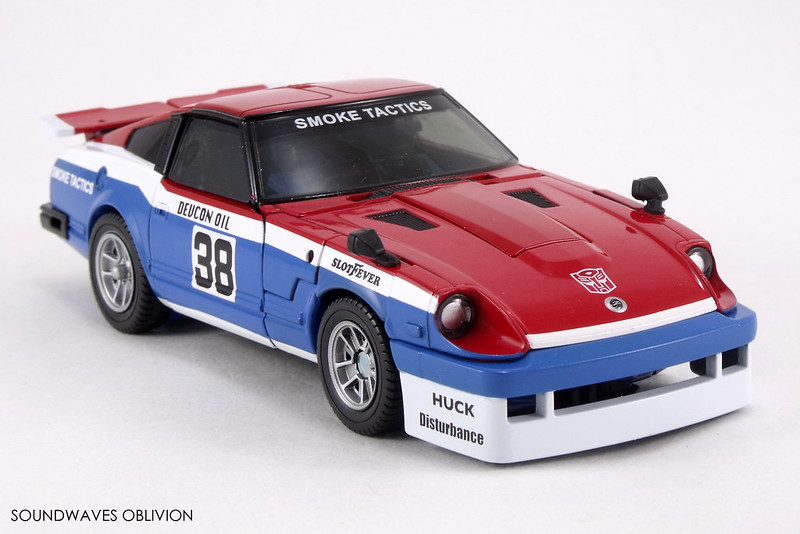 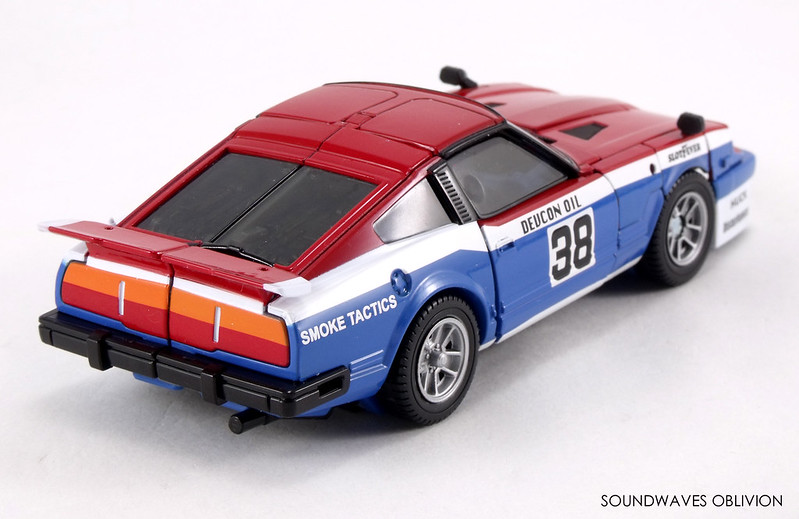 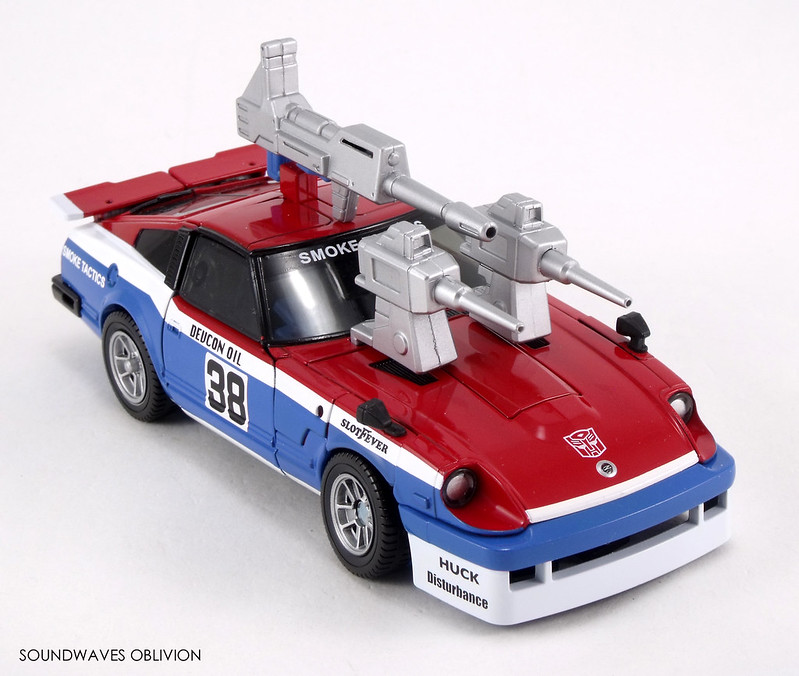 Vehicle Mode: Nissan Fairlady 280Z-T (Translated from the instruction pamphlet)
Smokescreen transforms into a Fairlady 280Z-T outfitted in a race car specification. Although based on the same Fairlady 280Z-T body type as Prowl and Streak, his appearance differs due to the aerodynamic parts included on the front and rear sections. The body is painted in three vivid colours of red, white and blue with the number “38” adorning the side of the car body. Smokescreen transforms into vehicle mode to use his best skill “Smoke Screen Disturbance Tactics”. This technique sprays thick black smoke from the vehicle's rear exhaust; the smoke sticks to metal blocking the enemies view and causing confusion allowing the Cybertrons to launch surprise attacks. Smokescreen being a race car helps spread the smoke faster over a vast area increasing the success of this disturbance tactic. Smokescreen’s name literally means “smoke screen” as a race cars emit exhaust, friction smoke and clouds of dust that follow the car. Based on his name it was decided that in the cartoon he would have a “smoke screen” ability. 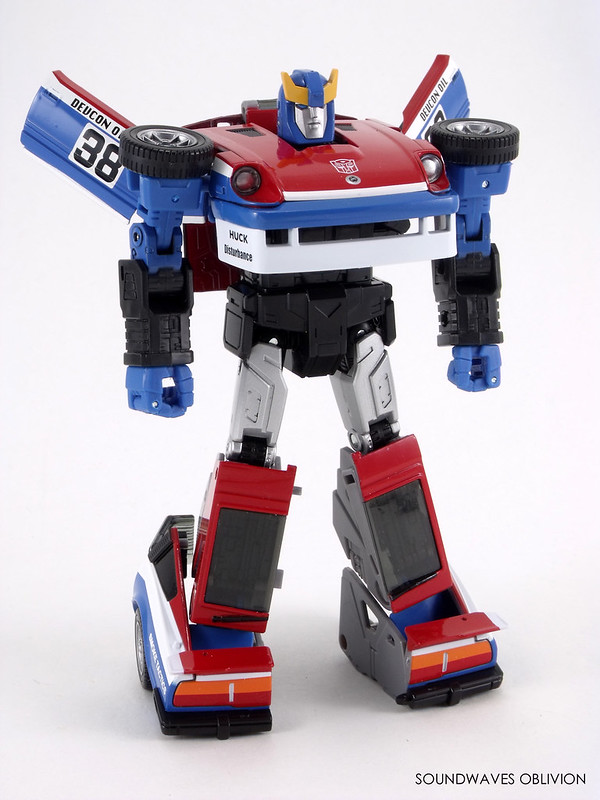 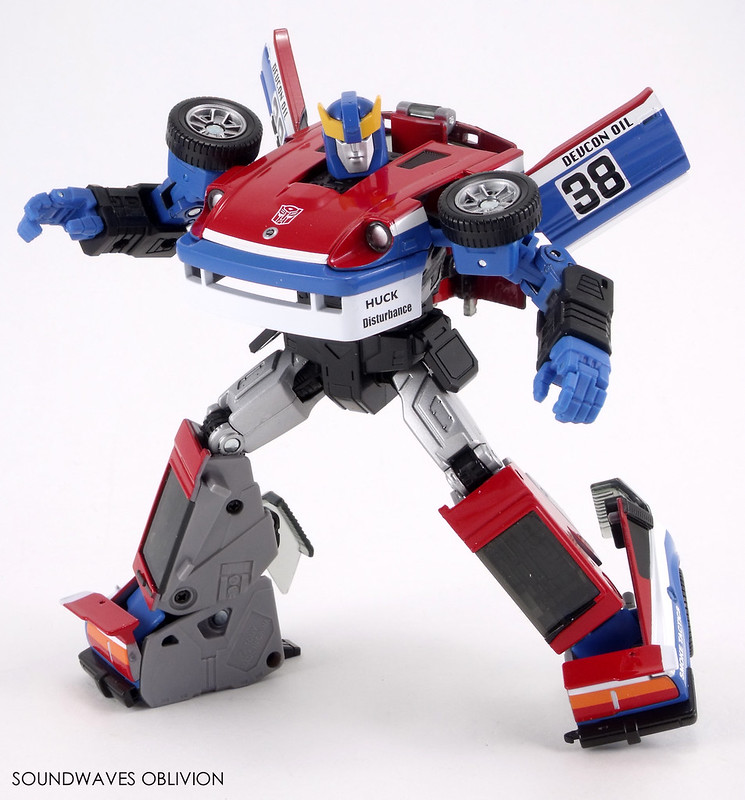 Robot Mode: Smokescreen (Translated from the instruction pamphlet)
Function: Tactician
Motto: "A look can be deceiving; a touch can be lethal."
Profile:
Smokescreen is a Cybertron tactician who as his name implies uses smoke screen disruption tactics. His main responsibilities are to hinder enemy attacks on the battlefield, disrupting their chain of command and to hide the whereabouts and activities of the Cybertrons. As well as his smoke screen injectors, he possesses an arsenal of weaponry which are specifically designed to obstruct the enemy's field of vision, such as his Disruptor Rifle, Black Beam and Jamming Launchers. As such Smokescreen has a limited amount of firepower and is not suited for head to head battles with the enemy. He would never attempt a head on battle, by studying his surrounding environment such as terrain and buildings, he would use his cunning to guide his enemy in the wrong direction to an unfavourable situation. His unconventional actions on the battlefield has the power to turn the tide for the overwhelmingly disadvantaged Cybertron forces. Due to his charm and affability, Smokescreen is one of the most trusted Cybertrons. 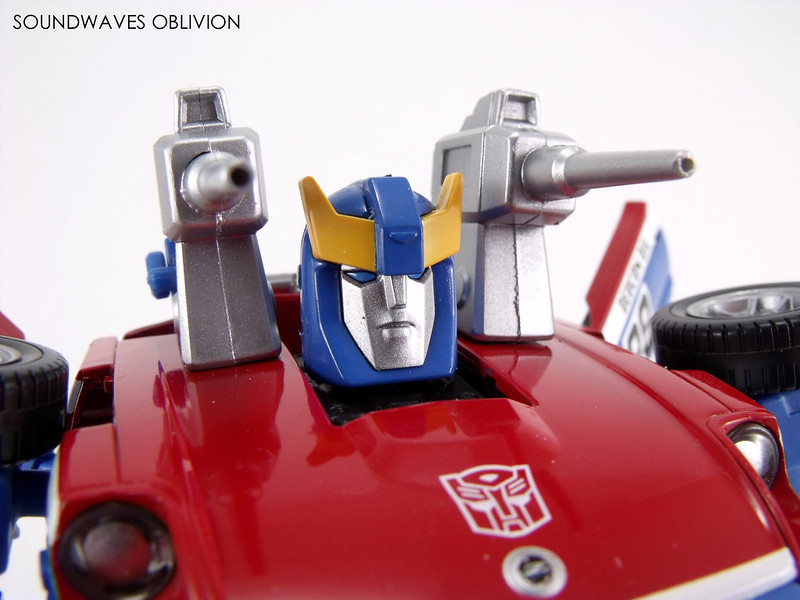 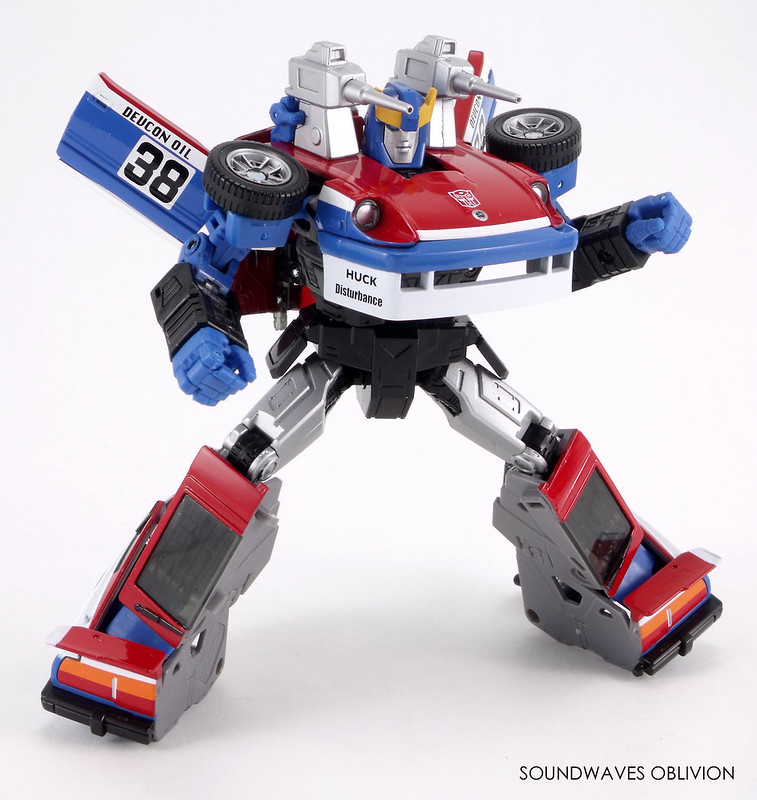 Weapon: Jamming Launcher (Translated from the instruction pamphlet)
These are beam weapons mounted on each shoulder. Emits a multitude of fine particles, infrared rays and energy waves which disrupt the guidance systems of targeted aircraft. This weapon can also be used in vehicle mode as seen in Episode 31 “The Mystery of the Golden Lagoon”. 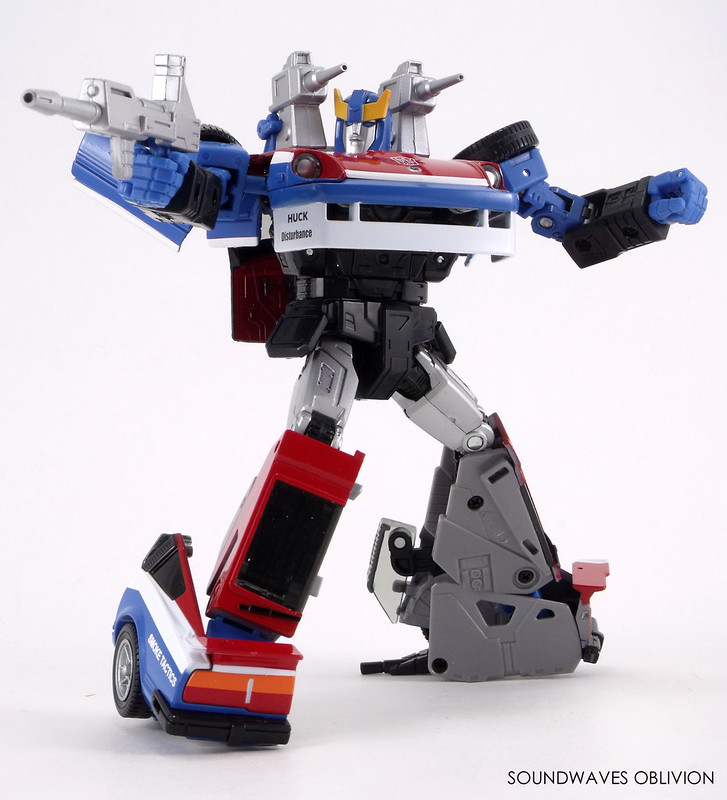 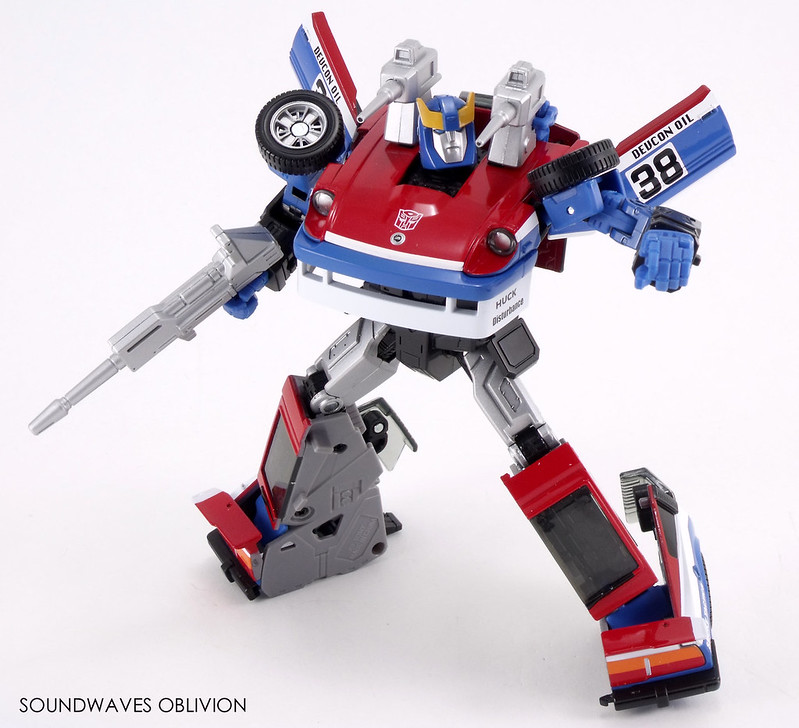 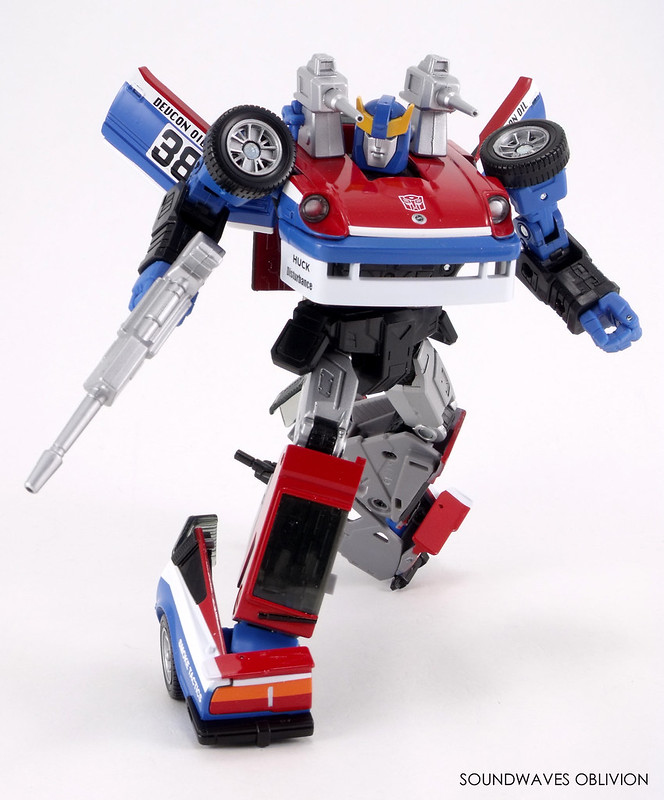 Weapon: Disruptor Rifle (Translated from the instruction pamphlet)
Smokescreen handheld weapon which projects an energy web which inhibits or shorts out the function of its targeted electronic device. In Episode 42 “The Key to Vector Sigma Part 1” Smokescreen uses it to distract and incapacitate Megatron. 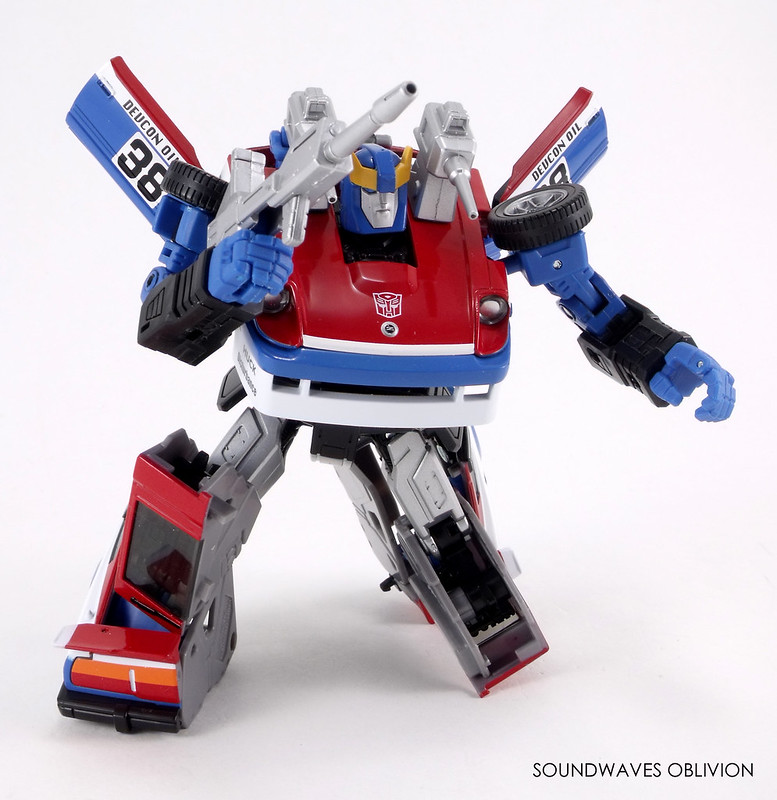