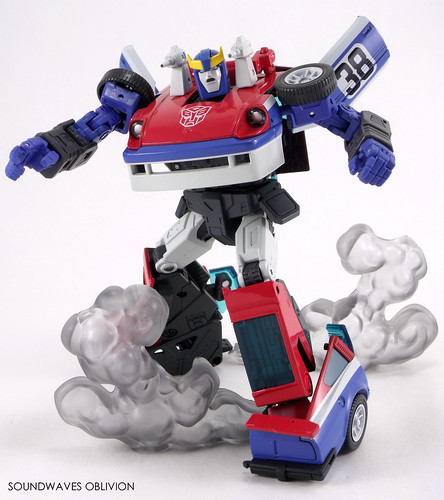 Profile (Translated from the Trading Card)
MP-19+ Cybertron Tactician Smokescreen
Function: Tactician
Motto: "A look can be deceiving; a touch can be lethal."
Profile:
Smokescreen is an excellent tactician for both disruption and battle withdrawal tactics . His special game changing skill is emitting a smoke cloud from his vehicle mode's exhaust pipe to blind the enemy. His judgement calls have saved his comrades on many occasions; highly valued by Commander Convoy.
STR...4; INT...8; SPD...7; END...5; RNK...6; CRG...8; FBL...6; SKL...9 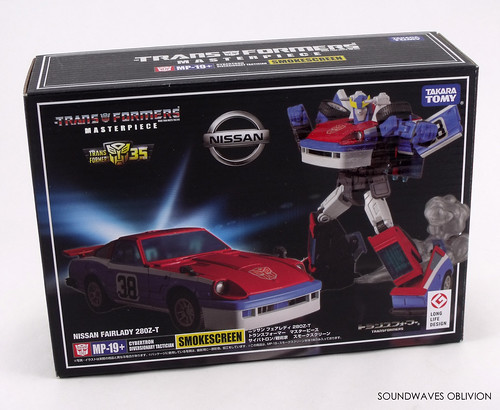 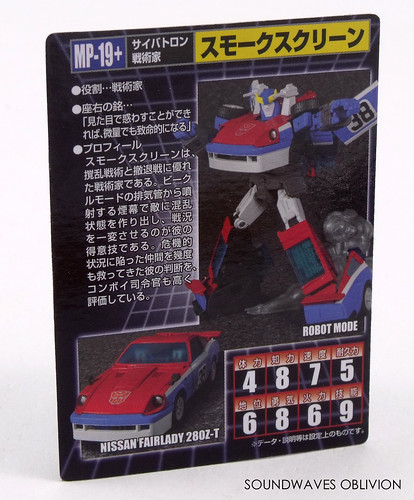 MP-19+ Smokescreen was released at the end of January 2020 and is the last of the Fairlady cars to receive the cartoon update. I really like the original MP-19 Smokescreen (article link here) and was initially concerned with how a simpler looking vehicle mode would turn out. 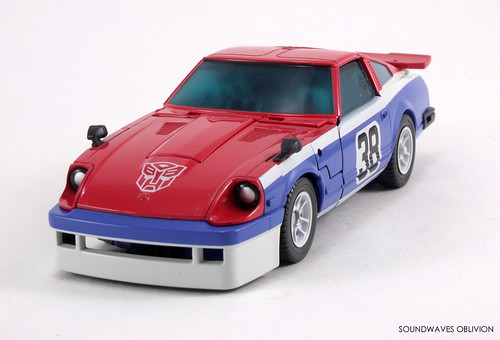 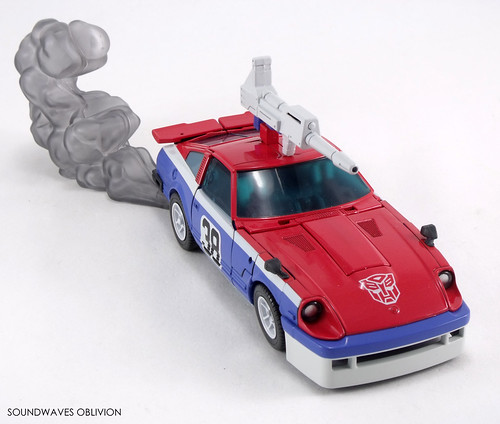 The original has plenty, but not enough in my opinion, sponsor logos plastered over the vehicle just like the real rally car with a few "Easter Egg" references. MP-19+ however does not have any sponsor logos, only retaining the number 38 on the car doors, and despite this the vehicle mode does still look rather good. 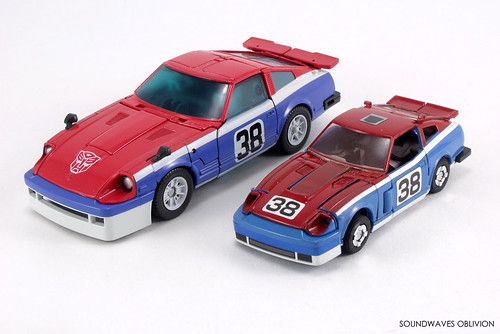 Smokescreen comes with a new translucent grey smoke effect accessory which is a nice addition. The smoke effect can split in half allowing you to use this in a number of poses in vehicle or even robot mode. 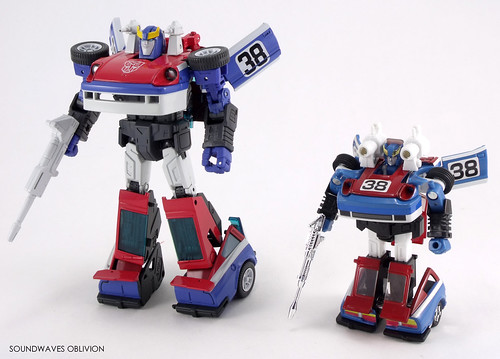 As well as having a really good vehicle mode, Smokescreen has a stand out robot mode which work especially well with the cartoon colours. One thing that Takara have improved is that Smokescreen can now firmly hold his gun. The Fairlady cars since MP-17 Prowl have not had much lock being able to hold their guns firmly, at least with my copies. Like MP-18+ Streak, Smokescreen has a new updated headsculpt. I didn't think that the original could be improved upon but this new sculpt does a good job and he comes with an additional 2 faces, one smiling face and one shouting face. 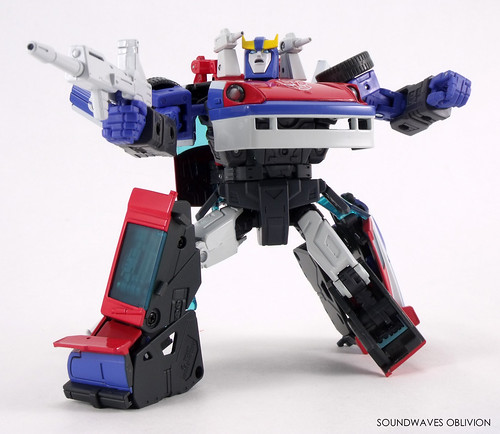 The last mould change are the two shoulder jamming launchers. These are now integrated into the design so you can transform from vehicle mode to robot mode without removing them like the original MP-19, they can however get in the way slightly but not by much but you need to make sure they are positioned correctly when transforming back into vehicle mode. 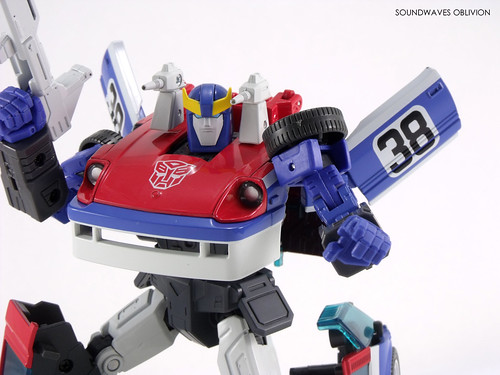 Overall this is a fantastic release and a welcome addition to the collection and is well worth picking up. 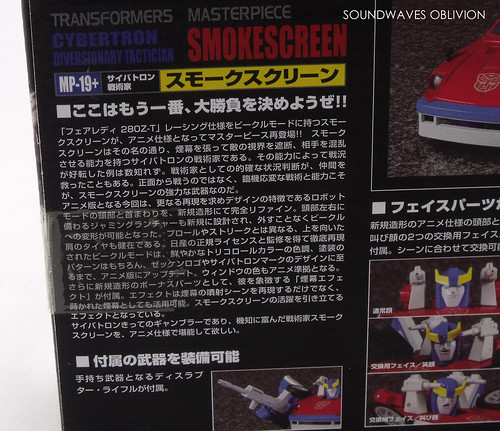 ■ Let’s choose which game we’re going to play here!! (Translated from the back of the box)
Smokescreen, the “Fairlady 280Z-T” race car, has returned to the Masterpiece series, and is based on the cartoon version!! Smokescreen is a Cybertron tactician and as his name implies he has an ability to blind and confuse his opponents with a thick cloud of smoke. There are countless examples of when this special ability has turned the tide in battle. His accurate judgement as a tactician has also saved his friends on many occasions. Smokescreens tactics and abilities are powerful weapons that he uses instead of rushing headfirst into battle. This new cartoon version has been further refined with new sculpting to the robot modes head and neck. The shoulder Jamming Launchers have been completely remade allowing Smokescreen to transform into vehicle mode without the need to remove them. Still present and unlike Prowl and Streak the tires on his shoulders face upwards. The officially licenced vehicle mode which was designed under supervision from Nissan has been updated with the cartoon colouring which includes the rich tricolour tone, painting pattern, number logo and the Cybertron insignia. The windows have also been updated to the cartoon colouring. As a bonus accessory, Smokescreen comes with a brand new smoke effect. Not only can you recreate Smokescreen emitting the thick cloud of smoke you can also position this as a smoke trail. This new effect more than compliments Smokescreen. We would like you to enjoy this new cartoon styled Smokescreen, the Cybertrons best gambler and resourceful tactician. 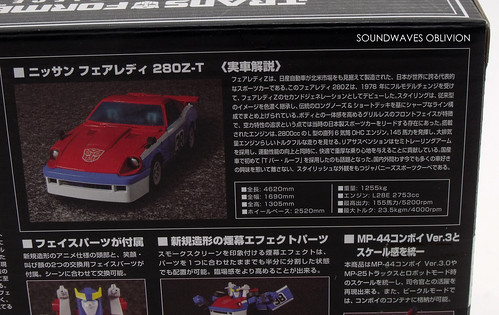 Nissan Fairlady 280Z-T (Actual Car Notes) (Translated from the instruction booklet)
The Fairlady Z was built with a view to capture the North American market, a sports car of which Japan is proud. The Fairlady Z 280Z received an overhaul and debuted in 1978 as the second generation of Fairlady Z. Its overall style has inherited the traditional image of the long nose and short deck with a sharp edged look. The front face of the grill enhances the integration with the car body and its aerodynamic characteristics made this a leading sports car in Japan at the time. The installed engine is a 2800cc L-type inline 6 cylinder with an overhead camshaft engine. Delivering 145 horsepower it is almost like driving a car with a much larger engine. Its rear suspension uses a semi-trailing arm which improves performance and comfort. This became the first domestic car to adopt the “T-bar roof”. A Japanese sports coupe which has attracted the interest of many car lovers both domestically and overseas. 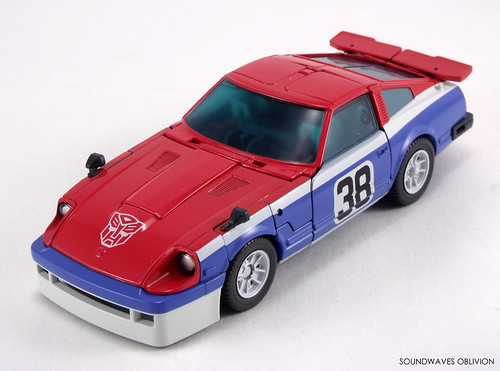 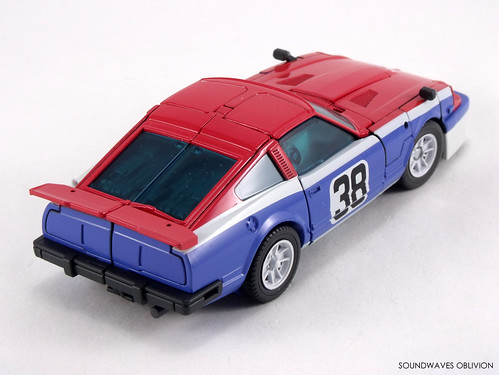 Vehicle Mode: Nissan Fairlady 280Z-T (Translated from the instruction booklet)
The Fairlady 280Z-T is Smokescreen’s vehicle mode which has been tuned for racing, using a front cowl and rear wing. The number 38 adorns the bonnet and the right and left doors. Just like a race car he participated in a Trans-Europe charity race. In vehicle mode his greatest weapon is his “smoke screen” / “smoke cloud” emitted from the injectors in his rear exhaust. This smoke cloud has a special property of gravitating towards metallic objects like the bodies of Super Robot Lifeforms. When friends are in peril on the battlefield, Smokescreen will use his “smoke cloud” to confuse the enemy and turn the tide of battle. 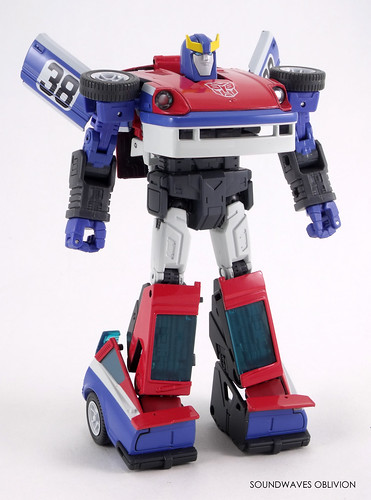 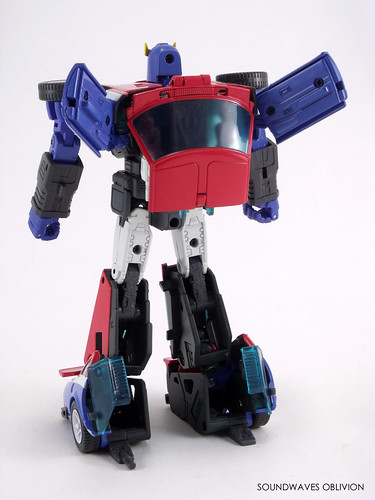 Robot Mode: Smokescreen (Translated from the instruction booklet)
Function: Tactician
Motto: "A look can be deceiving; a touch can be lethal."
Profile:
Smokescreen is a Cybertron who appears in the second season of “Fight! Super Robot Lifeform Transformers” and specialises in diversionary tactics. His weaponry such as his smoke screen, Disruptor Rifle, Black Beam emitted from his arms and Shoulder Jamming Launchers are all dedicated to confuse and distract his enemies. It’s his style to take advantage of the turmoil he causes in battle. As a tactician, judgement is another skill in his arsenal and he will quickly direct a strategic withdrawal in order to minimise casualties when he calculates the Cybertrons are at a disadvantage. With these skills he is greatly respected by his comrades. You can’t talk about Smokescreen's character without mentioning gambling. Using his wrist sensor to read slot patterns and keeping a straight poker face, his analytical skills make this easy. On the other hand he doesn't know when to quit while he’s ahead; at the casino on planet Monacus, he ended up losing all his winnings (despite cheating in the first place). Smokescreen is a unique Cybertron with his name representing his abilities, his personality sets the mood and the fact he loves to gamble. 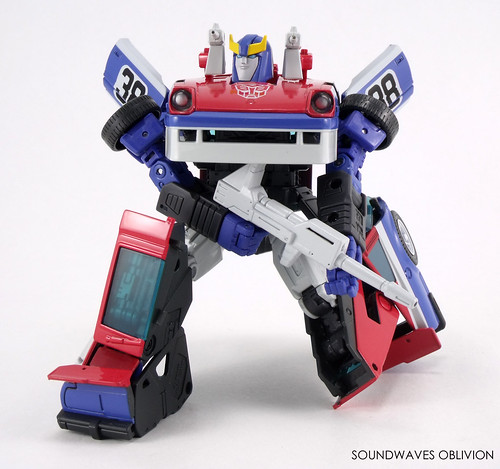 Weapon: Disruptor Rifle (Translated from the instruction booklet)
Smokescreen handheld weapon which projects an energy web which inhibits or shorts out the function of its targeted electronic device. In Episode 42 “The Key to Vector Sigma Part 1” Smokescreen uses it to distract and incapacitate Megatron. 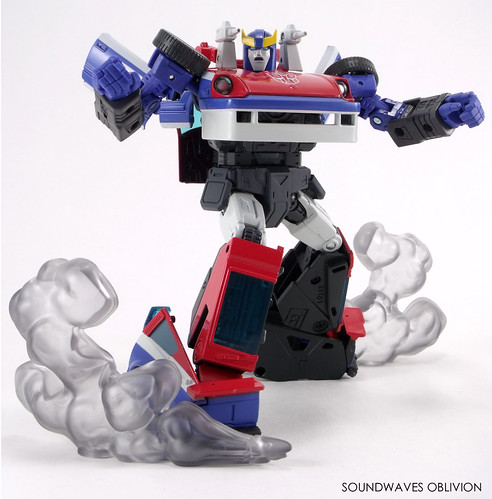 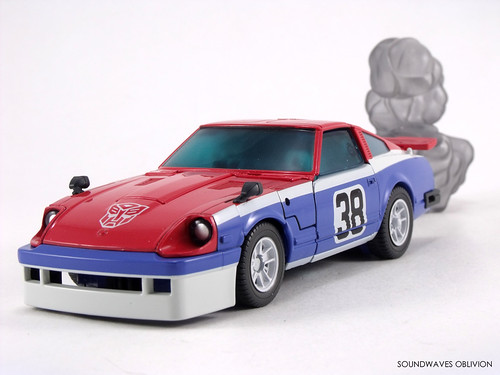 Effect: Effect Parts (Translated from the instruction booklet)
By combining the two effect parts you can recreate the “smoke cloud” that Smokescreen tactically uses. In episode 24 “The Micro Suicide Squad” he blinded Megatron, who had been powered-up with the Heart of Cybertron, giving the Cybertrons time to counter attack.
Posted by Jeremy Barlow at 12:30