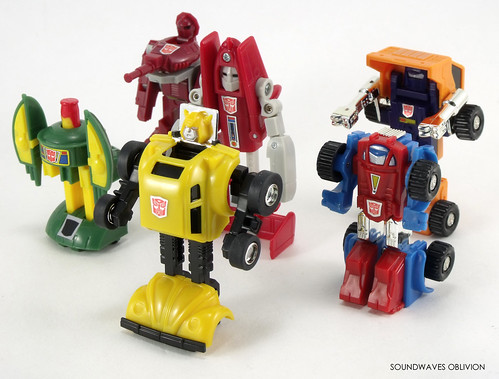 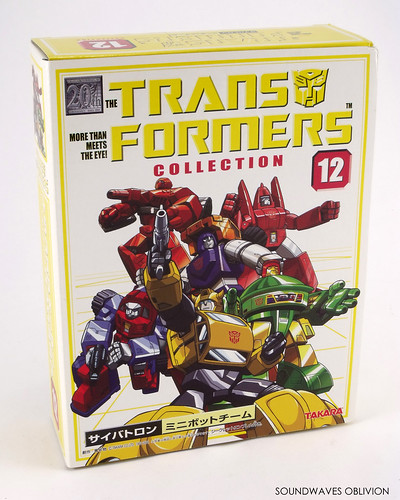 This was the first and only Minibot "gift set" released in the Transformer Collection series and it's a shame we didn't see other Minibots, although Wheelie was released in the "Future Cybertrons" set alongside Kup (Chear). 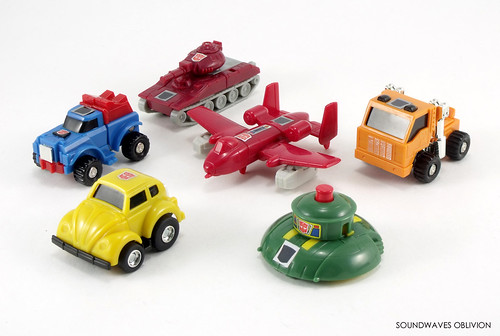 The set is a seemingly random collection of Minibots (3 from season 1 and 3 from season 2 of the animated series) and it's surprising we didn't get Cliffjumper, Windcharger or Brawn considering their release as key chains. We did receive the retools of Windcharger and Brawn (Tailgate and Outback respectively) in the 2008 Encore reissue set.

Collection 12 11 Cybertron Spy Bumble (Translated from the collectors card)
Function: Spy
Transformation: Wagen
Ability: When spying, uses his small body to his advantage. He can also operate underwater.
Character: Amongst the Cybertrons he has the best of intentions and personal conduct.
STR…2; INT...8; SPD...4; END...7; RNK...7; CRG...10; FPR...1; SKL...7; TTL...46 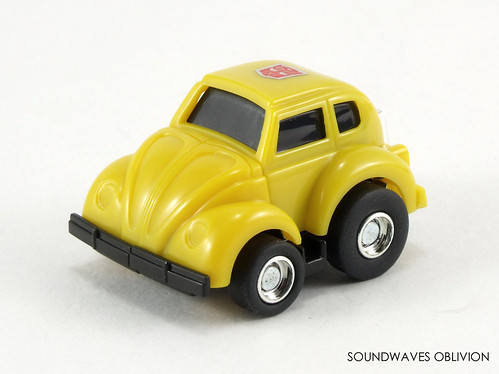 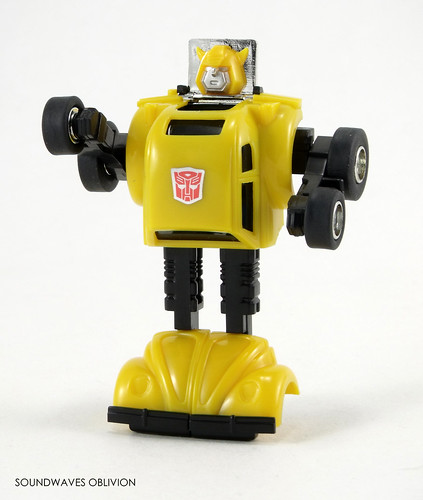 Bumble is the only figure in this collection to receive a significant modification. A key chain of Bumble was released the previous year in 2003 in Japan as a 7-Eleven store exclusive with a modified bumper to attach the key chain. This new release of Bumble features an updated head sculpt to better represent the original G1 cartoon, and to be fair it does a good job. There is a Cybertron  / Autobot logo sticker on the roof of the car with the rub sign being placed on the back of the robot head. The rear bumper remains unpainted like the 1990 Chinese reissue. The Encore release of Bumble 4 years later in 2008 would also reuse the new head sculpt as well as adding a few new paint details. 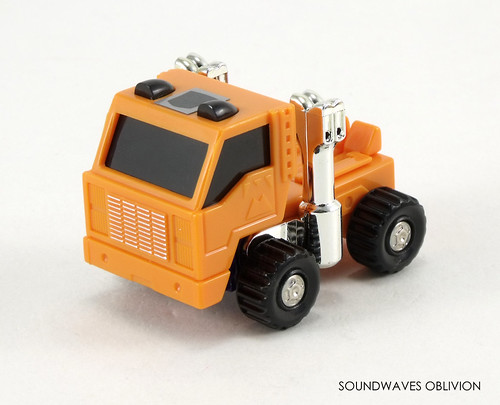 Drag (aka Huffer) is an orange semi-truck whose origins may not lie in Takara's Micro Change line but another toy line altogether. There is evidence to suggest Drag (along with Brawn, Windcharger & Gears) came from the unreleased Knickerbocker "Mysterians" series and was named Truckar. There is an "M" moulded on Drags cab door which you could be excused for thinking it stands for "Micro Change" but this same stylised "M" appears on the "Mysterian" figures released by Marchon inc in 1984. The figures released by Marchon were supposed to be released in Knickerbockers toy line before being cancelled, Marchon more than likely bought the rights from Hasbro who has acquired Knickerbocker toys. It is certainly worthwhile watching this brilliant video from Chris McFeely on the subject. 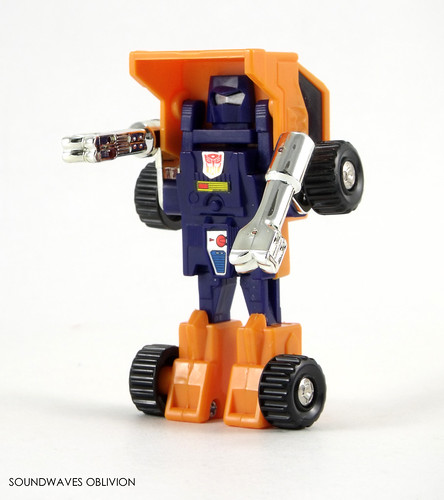 Collection 12 86 Cybertron Reconnaissance / Correspondent Adams (Translated from the collectors card)
Function: Reconnaissance / Correspondent
Transformation: UFO
Ability: Operates better in outer space; his high-powered particle beam is accurate enough to pass through the eye of a needle. Not suited as a robot on the ground.
Character: He gets lonely on his space travels. Enjoys showing of his flying skills.
STR…2; INT...8; SPD...10; END...6; RNK...6; CRG...7; FPR...6; SKL...9; TTL...54 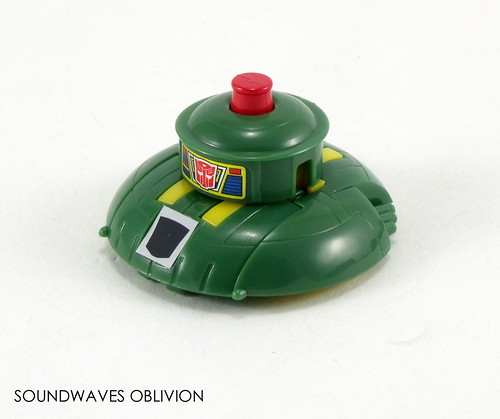 Quite often Takara opted for different names over Hasbro's names and Adams is one of them. Only names "Adams" on the mailaway leaflets, the toy that turned up was on Hasbro's card with the original "Cosmos" name. Adams is a green UFO based on the design photographed by George Adamski in the early 1950's, hence why Cosmos was called "Adams" - possibly. Adams was only available in Japan as a mail-away figure between 1985 and 1987. 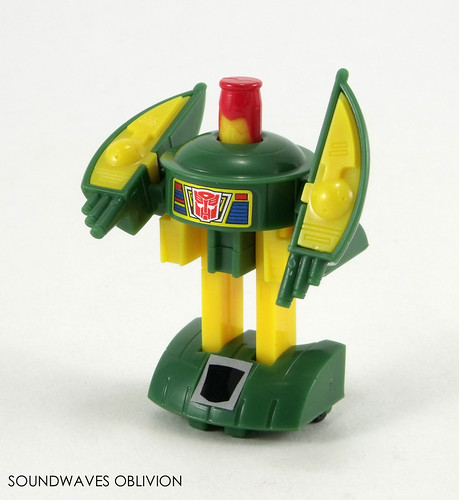 Collection 12 87 Cybertron Warrior Warpath (Translated from the collectors card)
Function: Warrior
Transformation: Tank
Ability: Has a wide variety of shells, explosive, thermal, cryogenic, acid, sonic, among others.
Character: An excellent shot and very strong, although if upended in tank mode, he is helpless. Is devastated if his gun barrel gets the slightest of scratches.
STR…9; INT...5; SPD...2; END...8; RNK...5; CRG...9; FPR...7; SKL...10; TTL...55 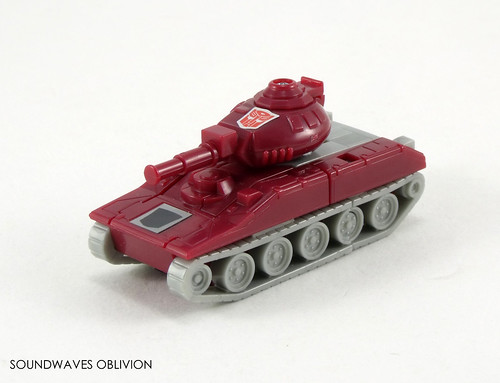 Warpath was another figure only available in Japan as a mail-away figure between 1985 and 1987 and was only released on Hasbro's card. Warpath transforms into a M55A1 Sheridan ARAAV tank with a rotating turret. 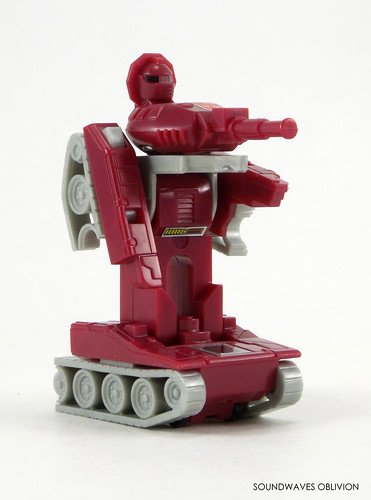 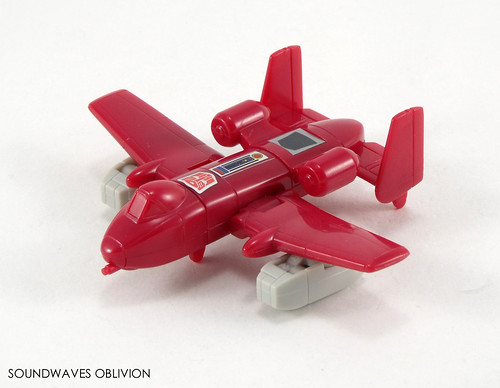 Powerglide was released in 1986 in Japan and had two different styles of packaging. The first released was on card similar to Hasbro's version but the second release came boxed like the 1985 Minibots. For some reason (possibly continuity for the set, or a mistake) Powerglide's designation number on the collectors card drops the C and is just numbered 62 instead of C-62. 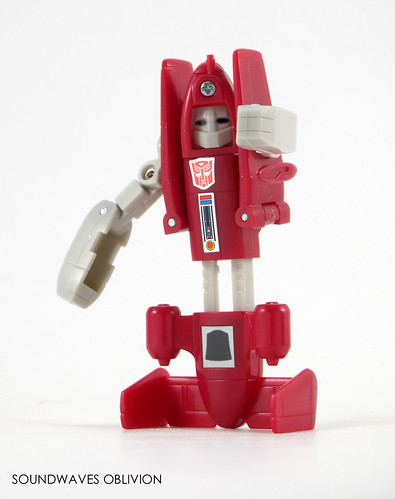 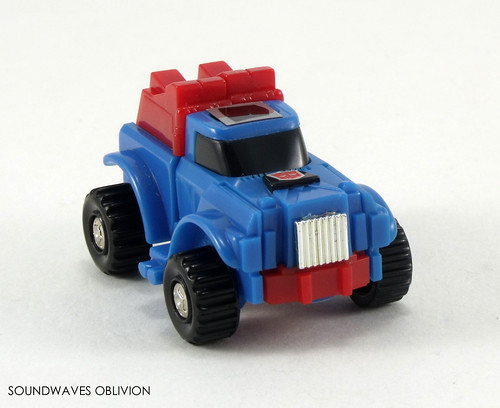 Gears is the second Transformer in this set with a link to the Mysterians toyline (note the "M" moulded in the trucks bonnet) and would have been known as "Blazar". Due to a delay for whatever reason, Gears never saw a release in Japan outside of the initial Micro Change version so this reissue marks the first time Gears finally sees a release. 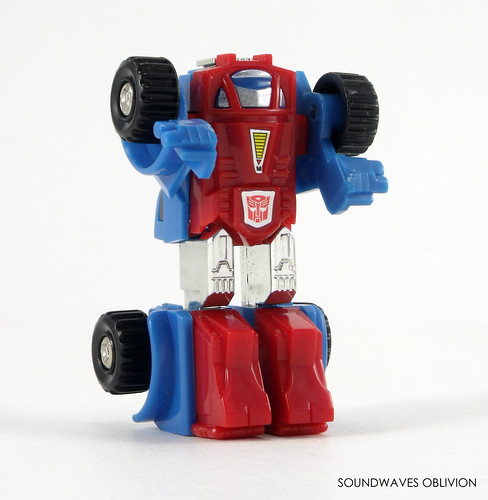 The Transformers Data Files that come with the Transformers Collection Minibot Team include Warpath, Gears and Drag. Below are translations from the included pages:- 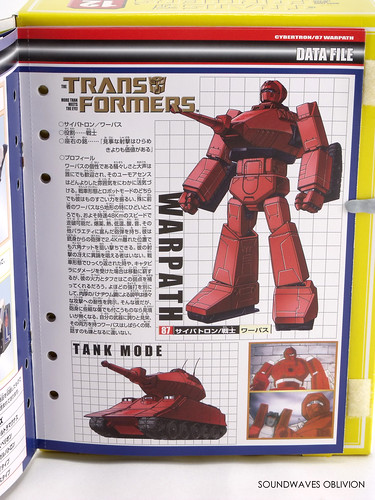 ○ Cybertron Warpath
○ Function: Warrior
○ Motto: “A good shot is worth more than a good intention.”
○ Profile:
His boisterous, loud-mouthed personality is welcomed by everyone and his sense of humour invigorates an overwhelmingly gloomy atmosphere. Exerts tremendous power in both tank and robot mode. In his tank mode, Warpath can travel over the roughest of terrains at speeds of 48 km/h. Has a wide variety of shells at his disposal such as explosive, thermal, cryogenic, acid and sonic. Can hit a hex-nut at a distance of 2.4 km with a shell from his barrel. No one would argue with his sharpshooting ability. Unable to move if he is upended in tank mode or his treads are damaged, however his firepower and toughness more than make up for this weakness. His thick vanadium-steel armour is resistant to all but the heaviest of blows. Will lose his mind if his barrel gets even the slightest of scratches. Warpath takes pride in the appearance of his weapon that if it gets damaged he would be too depressed to talk. 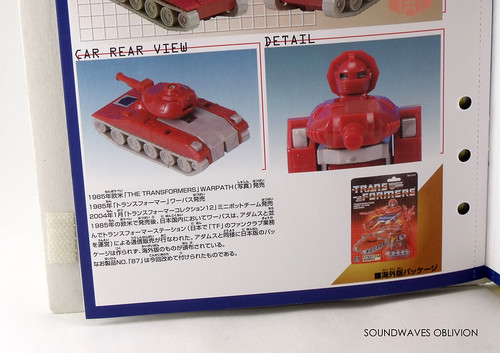 - Western release in 1985 “The Transformers” Warpath
- Released 1985 “Transformers” Warpath
- Released January 2004 “Transformers Collection 12” Minibot Team
After being sold in Europe and North America in 1985, Warpath was made available in Japan as a mail away release alongside Adams through Transformer Station (the fan club in Japan). Like Adams, Warpath was distributed in western packaging. The No. 87 product numbering has been added for this new release. 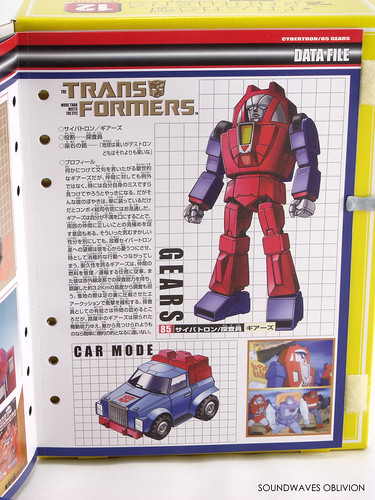 ○ Cybertron Gears
○ Function: Reconnaissance
○ Motto: "Earth stinks, but Destrons stink worse."
○ Profile:
The pessimistic Gears is always complaining and tells anyone, he even tries to find fault with himself. Convoy however knows this is all an act. His complaining forces others to see the good out of a situation. Although his sour personality is mostly an act, thinking of his homeworld of Seibertron will depress him, negatively affecting his performance. Gears has tremendous endurance and will carry his comrades so they can conserve their fuel. Able to detect infrared wavelengths and excels at reconnaissance missions as he is able to jump 3.2km. For a soft landing he creates a compressed air cushion under his feet. Comrades appreciate his reconnaissance ability but due to his poor maneuverability when he launches, he is an easy target for the enemy. 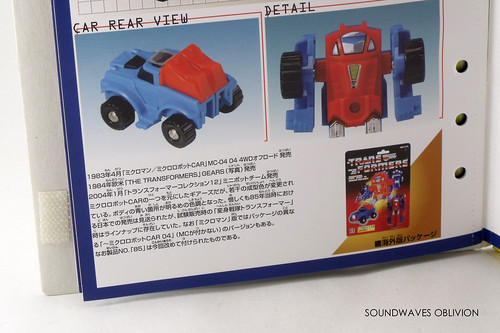 - Released April 1983 “Microman / Micro Robo CAR” MC-04 04 4WD Off-Road
- Western release in 1985 “The Transformers” Gears
- Released January 2004 “Transformers Collection 12” Minibot Team
Gears was based on one of the Micro Robo CAR releases but features some moulding colour differences. Unfortunately the Japanese release of Gears in 1985 was postponed yet he did appear in the lineup during the market test sales of “Henshin Sentai Transformers”. Additionally there are two versions of the “Microman” Micro Robo Car 04 packaging, one version does not include the MC designation number. The No. 85 product numbering has been added for this new release. 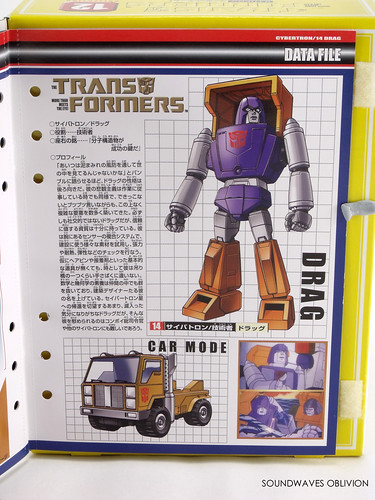 ○ Cybertron Drag
○ Function: Engineer
○ Motto: “Molecular structure is the key to success.”
○ Profile:
Bumble says that Drag looks at the world “through a sludge-coloured windscreen”. Pessimistic, says it can’t be done yet builds the most complicated fortress. Drag is not very sociable but incredibly reliable. His arms contain a complex system of sensors which allows him to test a variety of materials, some used for construction allowing him to test for tensile strength, heat resistance, elasticity etc. Even without the most basic of tools, he could construct a suspension bridge using hairpins and glue. His mathematical and geometrical abilities far exceed those of his peers aiding him with his construction designs. Drag misses Seibertron and longs to return, so much so that it would be difficult for Commander Convoy and the Cybertrons to offer him any solace. 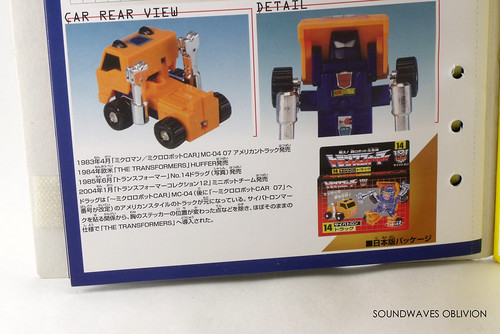 - Released April 1983 “Microman / Micro Robo CAR” MC-04 07 4WD American Truck
- Western release in 1984 “The Transformers” Huffer
- Released June 1985 “Transformers” No.14 Drag
- Released January 2004 “Transformers Collection 12” Minibot Team
Drag is based on the “Micro Robo Car” MC-04 American styled truck (the numbering was later changed to Micro Robo Car 07 on the box). When released in the Transformers series it was almost identical apart from the chest sticker that had to be moved due to the placement of the Cybertron insignia.
View the full gallery here.
Click here to view the other Transformer Collection Series releases.
Posted by Jeremy Barlow at 09:24