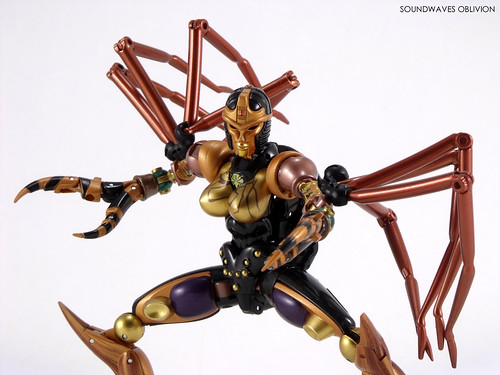 Profile (Translated from the Trading Card)
MP-46 Destron Espionage Black Widow (Beast Wars)
Function: Espionage
Height: 2.4m (In Robot Mode)
Weight: 1.5t (In Robot Mode)
Profile:
A Destron warrior who transforms into a “Jorō Spider” with toxic looking patterns and razor sharp fangs. In beast mode she can weave long threads to hang from. Enthusiastic over infiltration and information gathering and is strong in the field of hacking and mechanics. An excellent martial artist, enemies had better beware this Spider Woman’s deadly kicks. Even though she is a Destron she is ambitious, wise and schemes to overthrow Megatron.
STR:4; INT...7; SPD...6; END...6; RNK...5; CRG...8; FBL...7; SKL...8 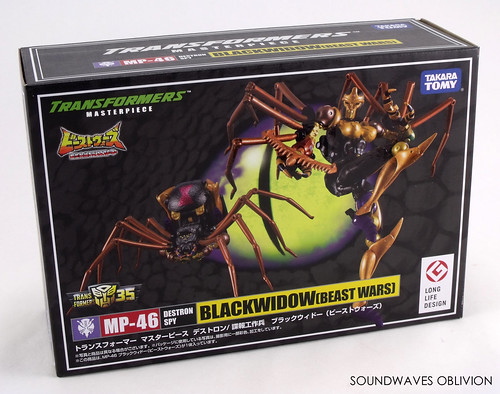 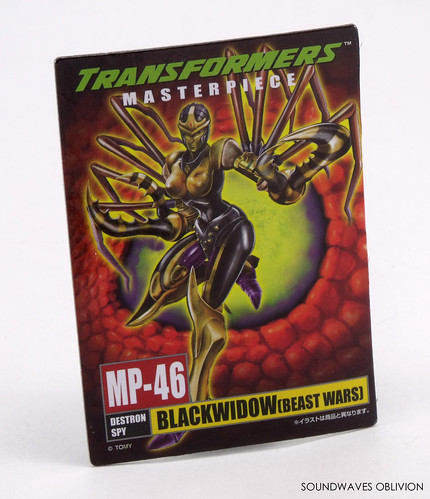 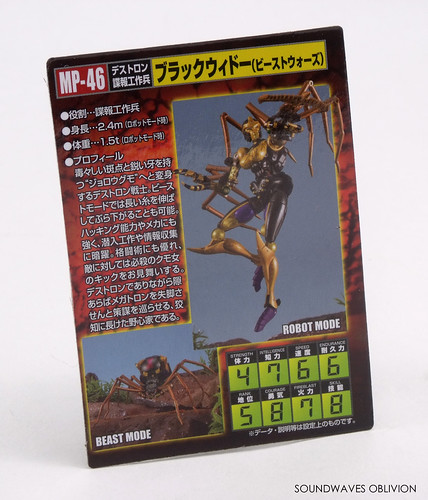 MP-46 Black Widow (aka Blackarachnia) was revealed at the 2019 Winter Wonder Festival at the Makuhari Conference Centre in Japan on the 10th February alongside MP-45 Bumble. On show was a grey prototype fixed to a translucent spiders web and this was a very show accurate figure which made many wonder how this actually transformed. The cartoon certainly cheats with the transformation and when the beast mode was eventually revealed you could see the compromise.
Released November 2019, Black Widow sold for 15,000 Yen ($140 / £105) which is quite expensive for the size and what you get with the figure. Black Widow comes packaged in spider mode and a number of accessories which include:- 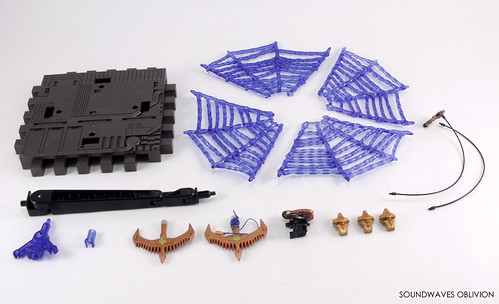 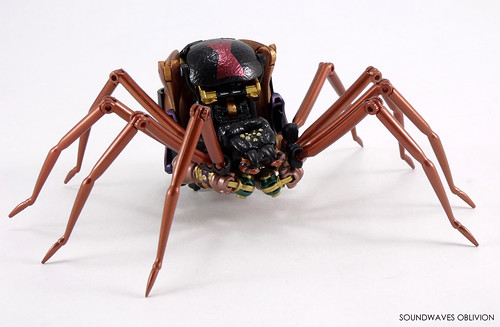 Despite her name, Black Widow is a jorō spider (a species of Golden Orb Spiders) as referenced in her profile on the character card, yet looking at the actual spiders, Black Widows spider form does more resemble a black widow spider than a jorō spider. Just like the original Beast Wars figure, the spider mode has the red hour glass marking which is associated with the black widow spider yet on the actual spider this marking is on the underside of the abdomen.


The initial photographs of Black Widow in spider mode looked rather clumsy but in hand spider mode is actually alright. In beast mode the eight spider legs are articulated as is the spiders head and mandibles. The spider legs are also strong enough to hold the figure up. Once the web has been set up on the Power Base, you can attach the Anchor Missile on two notches on the underside of the beast mode (on Black Widows robot arms) and then attach the missile to the adapter on the web so give the impression of a spider sitting on the web. Actually doing this is easier said than done, attaching the missile to the beast mode is hard enough but when attaching it to the adapter, the force pushes the missile off the notches. 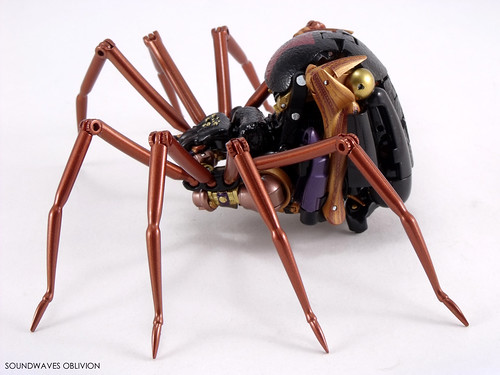 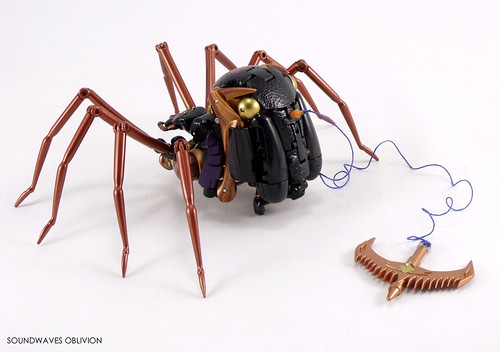 The thread on the Poison Anchor can attach to the rear of the spider mode to give the impression of a spider spinning a web or you can hand the spider from the thread, though on my copy this pulls out very easily. 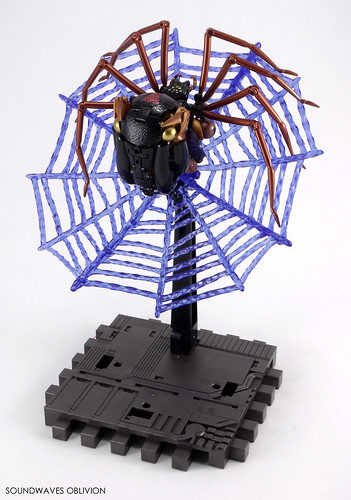 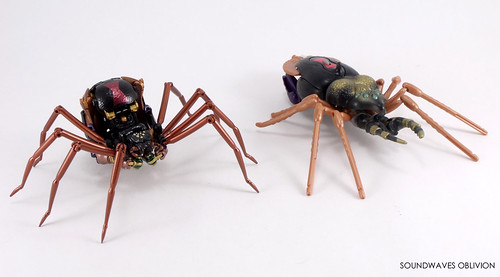 Transformation into robot mode is certainly easier than transformation back into beast mode. The figure does feel rather fragile so care is required. Robot mode is where this figure shines as Black Widow is stunningly screen accurate as well as incredibly articulated. 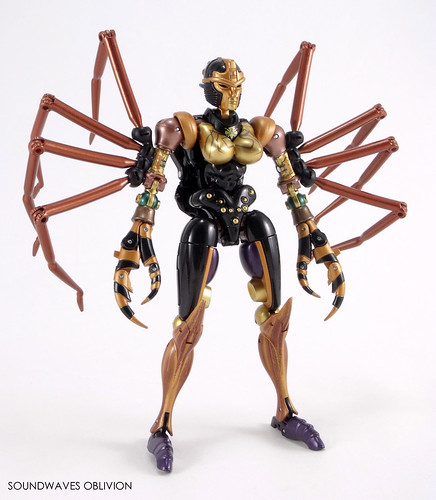 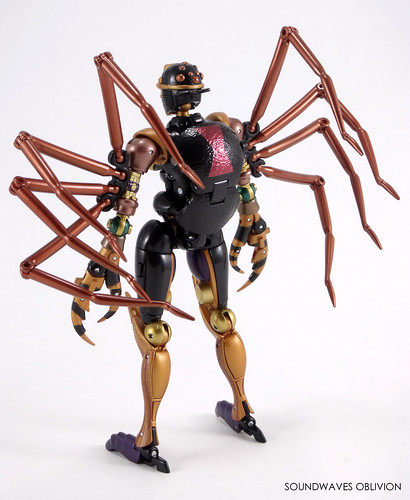 Like most Masterpiece figures Black Widow comes with additional faces. One of which as mentioned above is rather similar to her standard face. The instructions say this is a smiling face but the mouth looks identical to the standard face but the eyes are slightly wider. Other than that it is difficult to tell them apart. 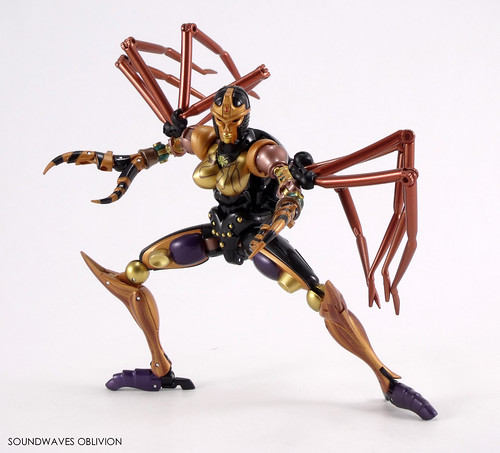 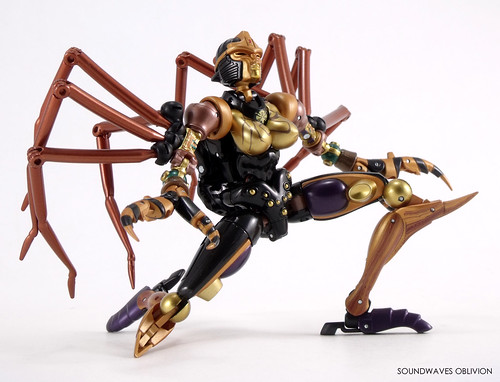 The other face is simply a screaming face with green eyes replicating her appearance in the episode "Other Voices Part 2" / "To Protect the Peace..." when she is possessed by Tarantulas / Tarans. Black Widow also comes with a visor from this same episode which is a pain to get on I find but once attached it does stay in place. 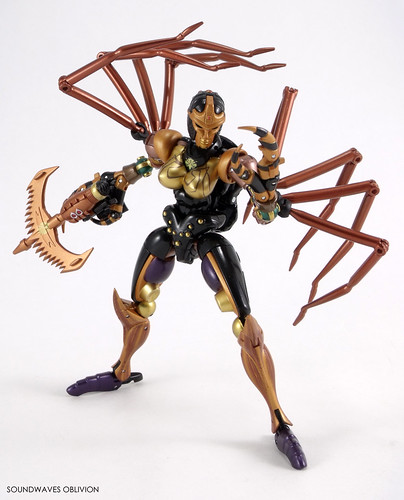 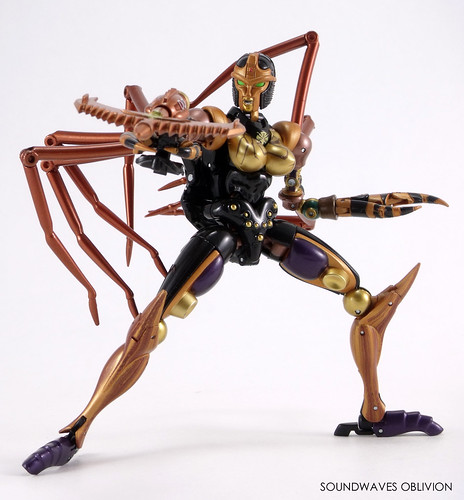 Black Widow's primary weapon is the Anchor Shot. The gun section transforms from a section of the spider abdomen and the anchor shaped missile plugs in rather tightly. There is a grey painted section of the missile which plugs in first and I can see this paint wearing off if used to often.

Overall this is a great figure for Beast Wars fans, if a little on the expensive side. There is however, at the time of writing a new Deluxe Class Blackarachnia figure in the War for Cybertron: Kingdom line which looks as articulated and screen accurate as the Masterpiece version for a fraction of the price ($22.99 USD). 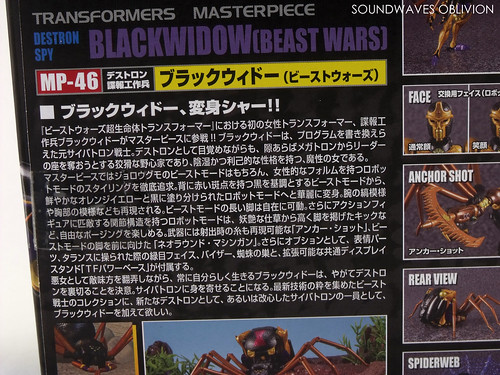 ■ Black Widow, transform!! (Translated from the back of the box)
Black Widow, the spy, was the first female Transformer in “Beast Wars: Super Robot Lifeform Transformers” and she has now debuted in the Masterpiece series!! Black Widow was originally a Cybertron warrior but her core program was rewritten when she was a protoform. When she woke as a Destron, she became a selfish femme fatale with ambition to usurp Megatron if she is given the opportunity. For this Masterpiece item we aimed to reproduce both the feminine styling of the robot form as well as the Jorō Spider beast form. Amazingly this transforms from a black beast mode with red markings on the back to a bright gold and black robot mode. The striped patterns on the arms and chest have been carefully reproduced. The beast mode legs are long and articulated. Additionally the robot mode joints are comparable to an action figure as it is highly articulated allowing such poses as bewitching gestures to high kicks. You can recreate the “Anchor Shot” weapon firing thread as well as the “Neo Round Machine Gun” by rotating the beast mode legs forward. There are also additional optional accessories such as facial expressions like the green eyed face when she is under the control of Tarans, a visor, a spiderweb and the expandable “Transformer Power Base” display stand. Black Widow does what she wants from toying with enemies and allies alike to deciding to betray the Destrons seeking refuge with the Cybertrons. Add Black Widow to your Beast warriors collection either as a Destron or a newly converted Cybertron. 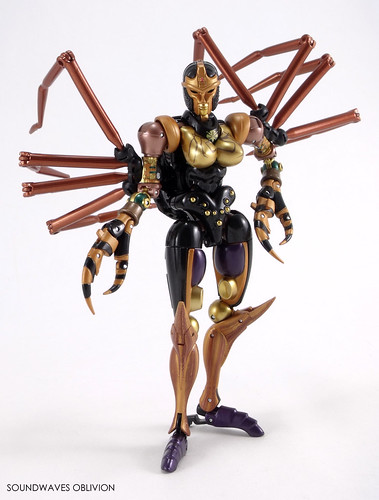 Transformers: Black Widow (Beast Wars) (Translated from the instruction pamphlet)
Function: Espionage
Height: 2.4m (Robot Mode)
Weight: 1.5t (Robot Mode)
Profile:
Around 20 stasis pods were jettisoned from the Cybertrons spacecraft, the Axalon and left to safely orbit planet Energoa. One of these pods crash landed in episode 8 of “Beast Wars Super Robot Lifeform Transformers”: “Kick of the Spider Woman”. Tarans got to the pod before the Cybertrons and reprogrammed the protoform inside as a Destron; inspired he gave her a spider alternate mode. This protoform became the Destron Spy, Black Widow. She was perhaps the most evil of the Destrons. The brutal and ruthless Black Widow pledged her loyalty to Megatron but in the background, plotted to lead the Destrons herself. Not only intelligent she is a skilled martial artist, Black Widow may be small but can easily overwhelm larger opponents. Determined to survive the Beast Wars, she will do anything to follow through with her ambitions. It appeared that Tarans had an unrequited crush on her and was smitten, often referring to her as “darling”, this odd relationship did not last long. In the battle for the floating islands, Black Widow outwitted her allies and took control of the island for herself. When Waspitor was possessed by the evil Starscream’s spark, he worked together with Black Widow to ensnare Megatron. ” After teaming up with Tarans to escape the planet at the climax of “Beast Wars”, she connected to Tarans mind and stole the data necessary to complete the evacuation. In the sequel “Beast Wars Metals”, it was revealed that Tarans’ consciousness had transferred to Black Widow. Black Widow was constantly courted by the new Fusor Warrior, Silverbolt who made her reassess her Destron lifestyle. When she discovered Megatron’s true intentions for the buried spacecraft, the Ark, she finally moved over to the Cybertrons. However, could the shell program implanted in her brain by Tarans threaten her life……...!? 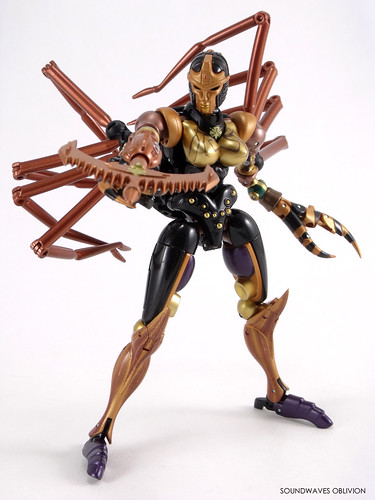 Weapon: Anchor Shot (Translated from the instruction pamphlet)
Black Widow’s hand-held weapon which doubles as the Widow Machine Gun. The anchor shaped missile explodes on contact. In beast mode it is stored in the abdomen. If you use the missile with a thread you can replicate the appearance of a spider hanging from a thread. 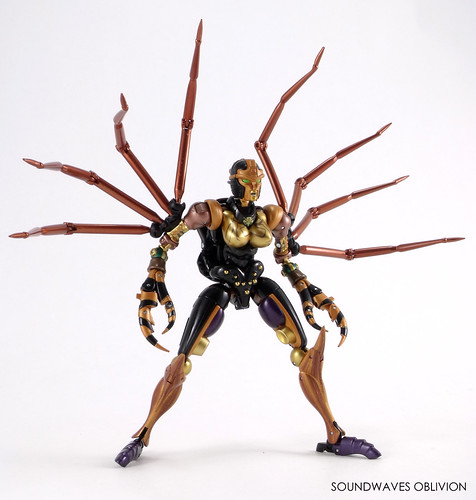 Weapon: Neo Round Machine Gun (Translated from the instruction pamphlet)
In robot mode when the beast mode legs spread and rotate forward they become 8 machine guns. These enhanced machine guns were installed by Tarans. 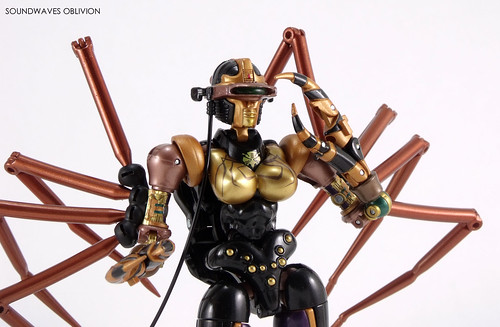 Item: Visor (Translated from the instruction pamphlet)
This visor was used by Black Widow in episode 26 “To Protect the Peace…” as she tried to see inside Tarans’ mind. It was later used to return Tarans’ consciousness back to his own body. This is actually Tarans’ equipment but was borrowed by Black Widow. 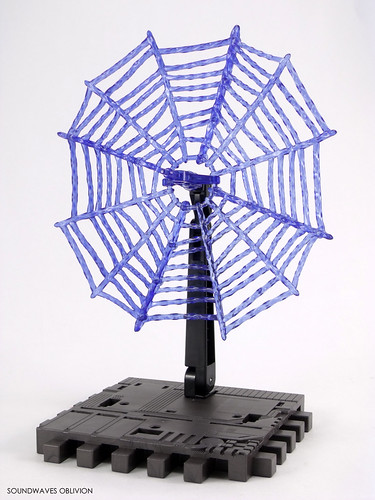 Item: Spiderweb (Translated from the instruction pamphlet)
A spiderweb which seats the beast mode. It can also be used as a net to catch enemies. Seen in the first episode of “Beast Wars Metals”: “We’re Back!”, you can recreate the image of Black Widow trapped by Tarans. 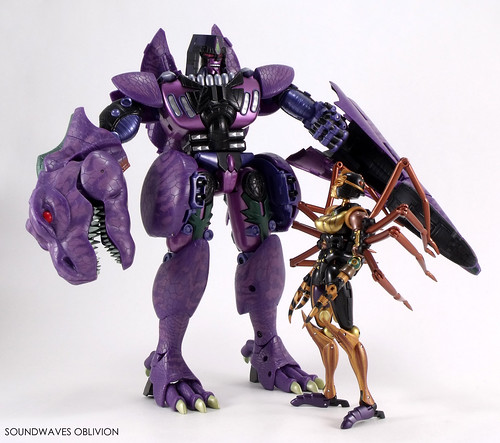