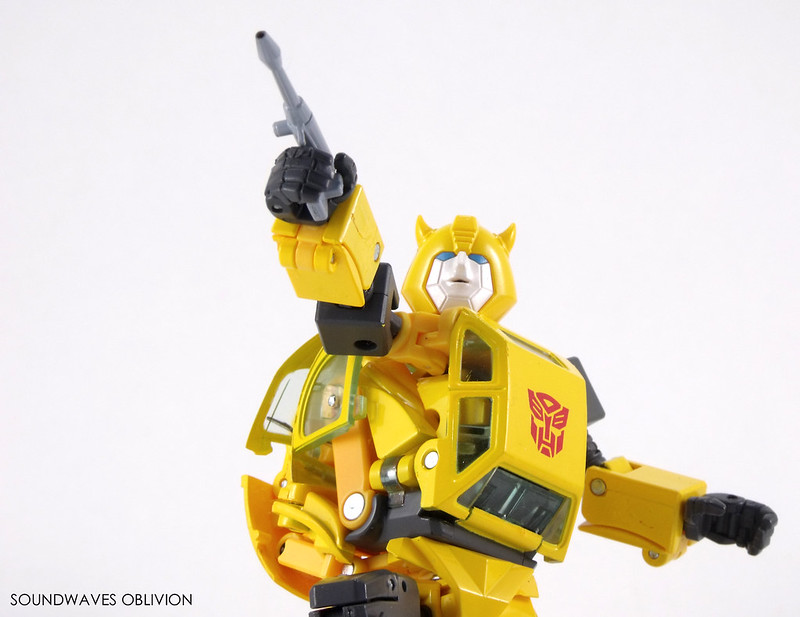 Profile (Translated from the Trading Card)
MP-45 Cybertron Intelligence Agent / Bumble Ver.2.0.
Function: Espionage
Motto: "The least likely can be the most dangerous."
Profile:
Bumble is the smallest Cybertron warrior. His size however is an advantage as he's able to infiltrate where others are reluctant to go. Has exceptional vision enabling him to detect enemy sensors in hostile territory. Bumble admires Commander Convoy and although he lacks the speed and strength he is always keen to make the effort in order to be recognised.
STR...2; INT...8; SPD...4; END...7; RNK...7; CRG...10; FBL...1; SKL...7 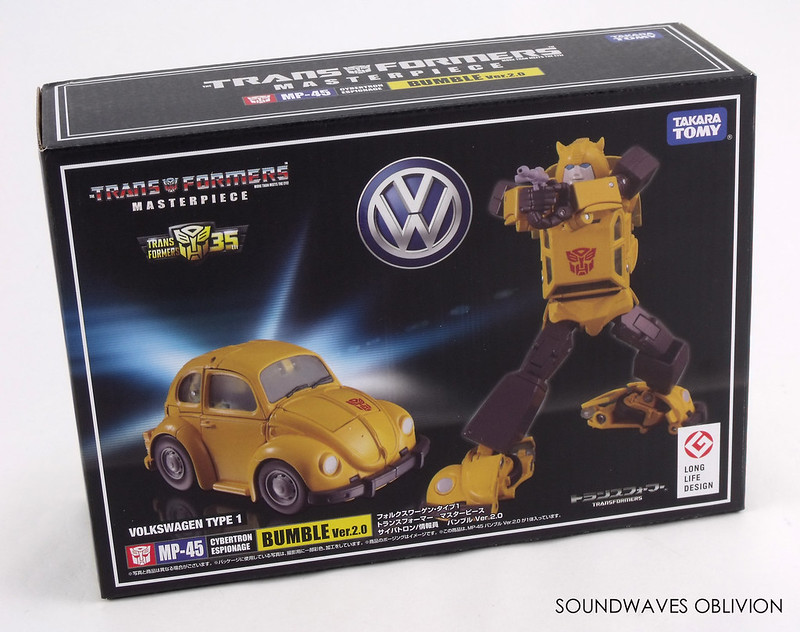 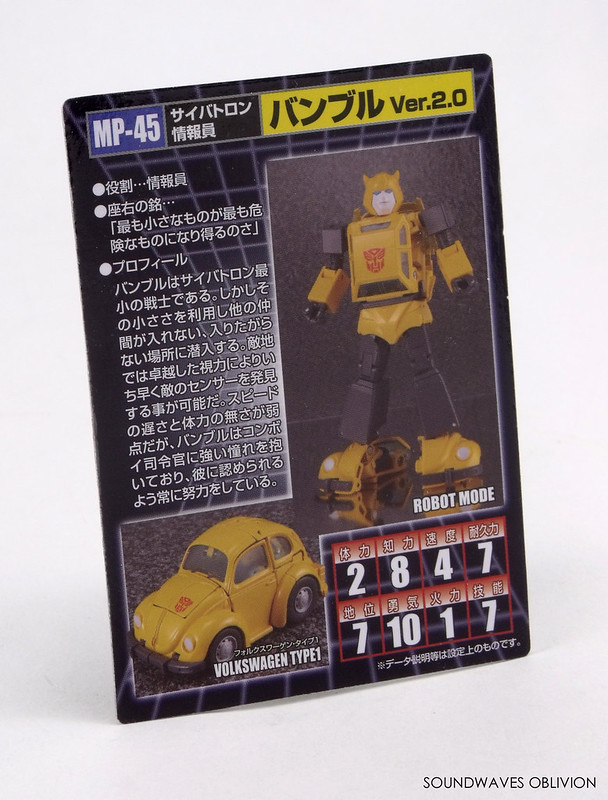 Originally slated for release at the end of September 2019, the second version of Masterpiece Bumble (aka Bumblebee) was released two months later in November 2019. The announcement of this new version of Bumblebee was supposed to be at the 2019 Winter Wonderfest on the 10th February where Takara Tomy were pushing the 2018 Bumblebee Movie which was yet to be released in Japan. Unfortunately details of the new Bumble figure were leaked a few days beforehand an the one thing that got people talking was the price - 13,000 Yen ($120 / £92). This price point was around the asking price of MP-33 Inferno; even the impressive MP-39 Sunstreaker was cheaper at 12,000 Yen.

The price point aside, the Wonderfest reveal confirmed that Bumble was true to the cartoon model whose car mode was based on the Choro-Q / Penny Racer version of the Volkswagen rather than the actual car model which was what MP-21 Bumble was based on.


Later down the line, stolen loose copies of MP-45 were being sold on auction sites and these copies had very loose joints. Fortunately in hand, the retail versions of MP-45 Bumble are not as loose however what you get for the price is very limited considering the original MP-21 Bumble (which cost half the price) came with a transformable Exo-Suit Spike, which admittedly was not very good anyway. 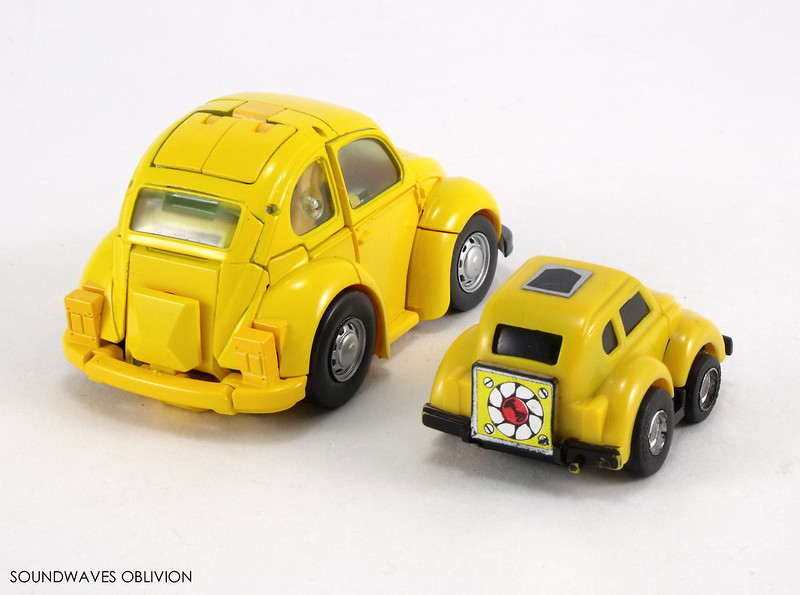 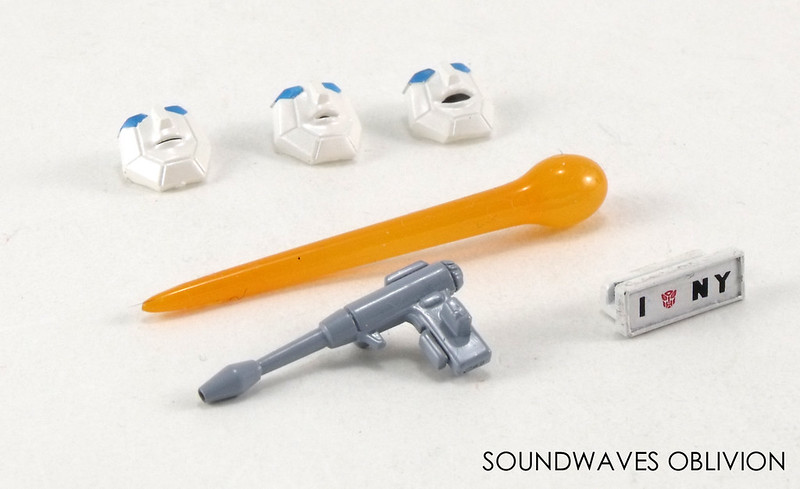 Bumble comes packaged in his vehicle mode and it is really small and it does an excellent job to represent Bumble from the original cartoon as well as the original toy. I have found there are a few parts which don't align very well although this could be my copy or me not transforming it as it was intended, but the clearances are not as forgiving as other figures. An additional feature of Bumble in vehicle mode is that you can seat the accompanying Spike figure inside. Unfortunately due to the transformation you have to almost transform car mode to open the doors and in order to sit spike inside you have to raise the roof section. Although this is quite frustrating to achieve, it is a nice touch to add. One thing to note with Spike, the figures arms do pull off very easily just like the MP-44 version. I do like this vehicle mode and at least the yellow colour used is much better than the colour used for MP-21. It is a shame the windows were not painted blue like the prototype seen at the Winter Wonderfest. 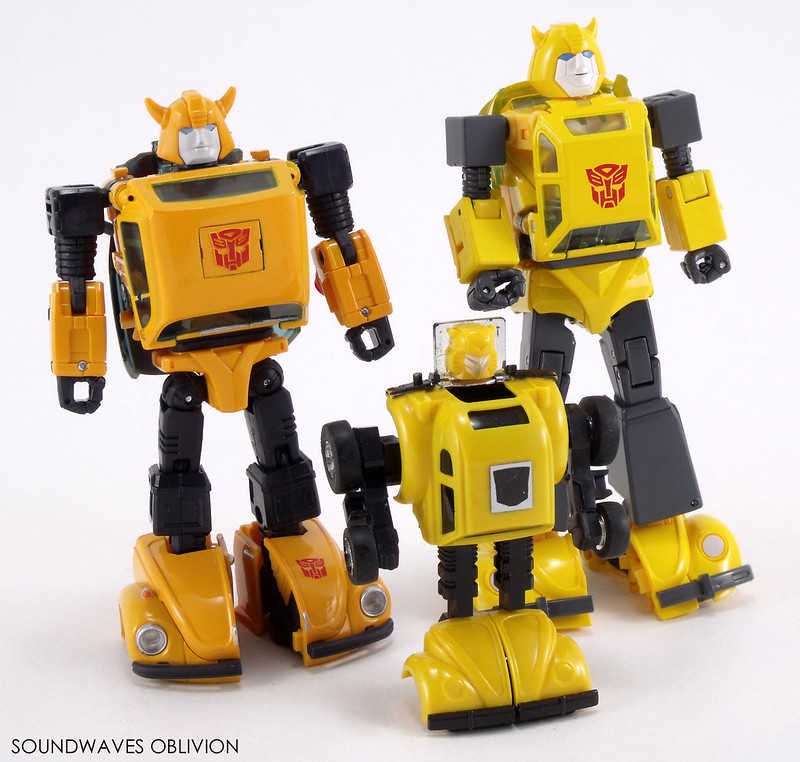 Transformation is not as simple as MP-21 Bumble and there are lots of parts which overlap others and as most of the plastic is painted clear plastic you need to be careful as this can be very brittle. 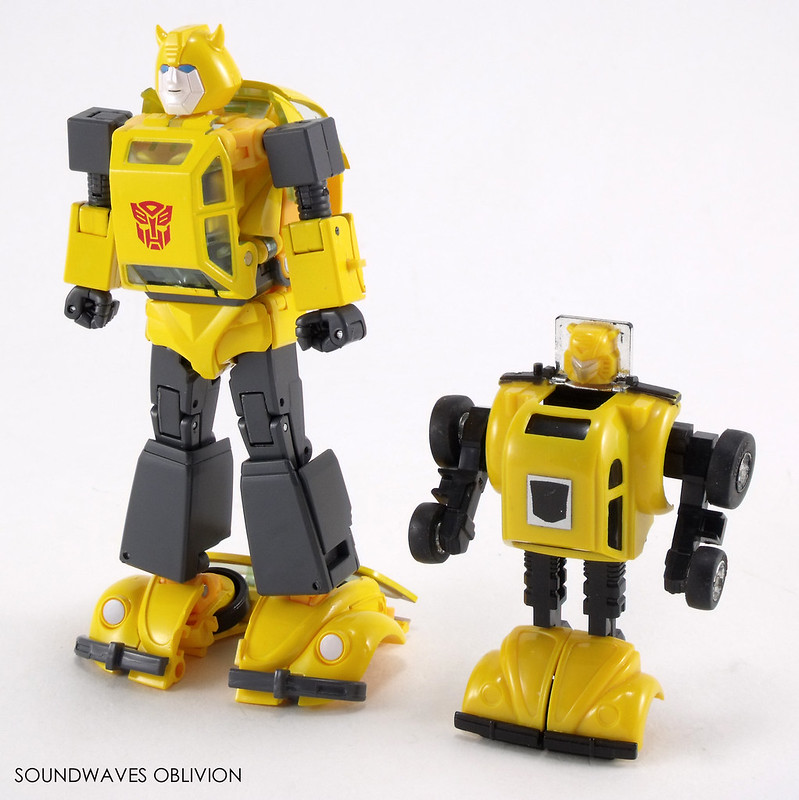 In robot mode, front on Bumble is as cartoon accurate as you can get. There are some complaints about the feet and the back of the figure however personally it doesn't bother me but I can appreciate how this can be an eyesore for others. Bumble is scaled with the other Masterpiece figures and is very small although is just a bit taller than MP-21 Bumble.


I do like this figure, the only sticking point is the price, although I paid for it I just can't justify the price for its size. I appreciate it will have more parts than MP-21 Bumble and rising manufacturing costs need to be passed on to the consumer. For now it seems the high price points seem to be staying; especially seeing as the next release being MP-46 Black Widow retailed at 15,000 Yen and this is another small figure (although this does include a spider web stand). 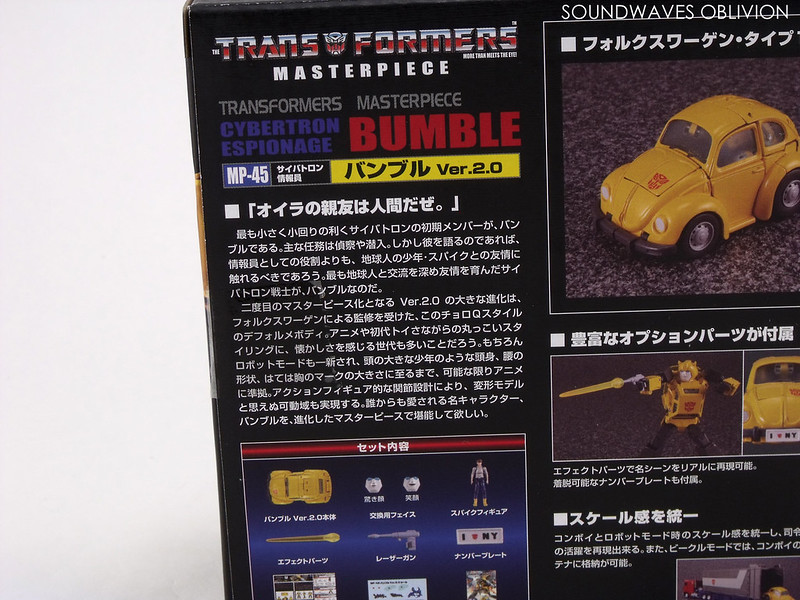 ■ My best friend is human. (Translated from the back of the box)
Small, manoeuvrable and smart, Bumble is one of the first Cybertrons we meet. His job is reconnaissance and infiltration. But rather than talk about his function of espionage we should mention his friendship with the Earth boy Spike. Bumble is the Cybertron warrior who had the most interaction with the humans and came to know them as good friends.
The main change for this Masterpiece Version 2 is the Choro-Q body style whose design was supervised by Volkswagen. Many generations will be flooded by nostalgia as this figures styling is just like the original toy and cartoon model. The robot mode has also been updated and is as close to the cartoon model as possible with a large head on his body like a growing boy, the shape of his waist and the large emblem on his chest. With a range of articulation like other action figures, you wouldn’t think that this is a transforming model. Bumble is a character loved by all, we would like you to enjoy this updated Masterpiece. 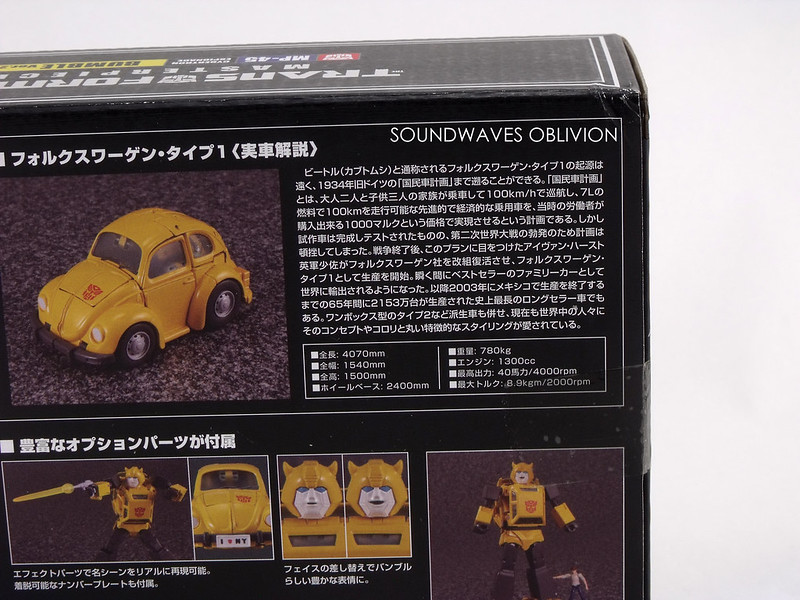 Volkswagen Type 1 (Actual Car Notes) (Translated from the back of the box)
The origin of the Volkswagen Type 1, more commonly known as the Beetle, can be traced back to 1934’s “People’s Car Plan”. The “People’s Car Plan” was envisaged that a family of 2 adults and 3 children could cruise at 100km/h. It was going to be an economical passenger car which could run 100km on 7 litres of fuel; as well as being an affordable price of 1,000 Marks. Although a prototype was tested and completed, the plan was aborted due to the outbreak of World War II. After the war, Major Ivan Hirst found the plan and revived Volkswagen and started production of the Volkswagen Type 1. It was exported worldwide and quickly became a best selling family car. It also made history for having the longest running production with 21.53 million units produced over 65 years with production ending in Mexico in 2003. This includes other derived cars such as the Volkswagen Type 2. Even today people are captivated with its concept, colours and characteristic round styling. 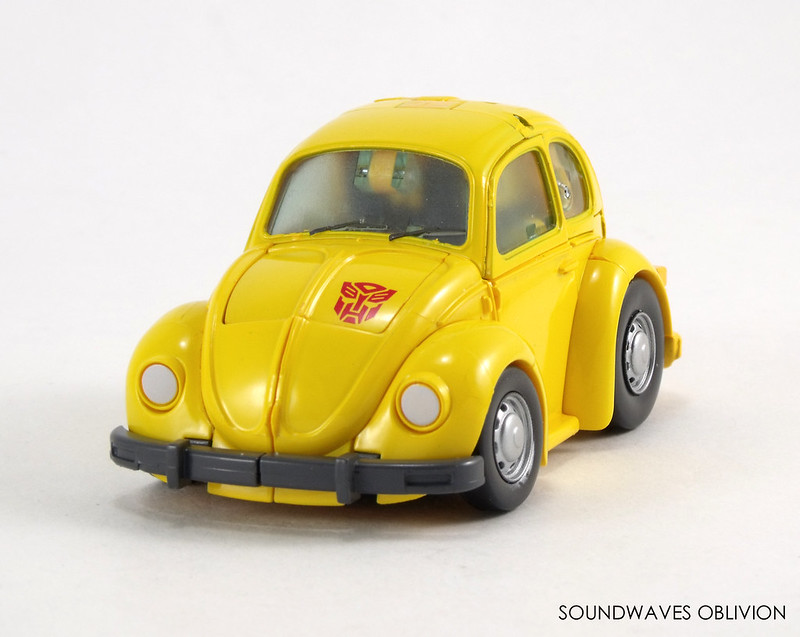 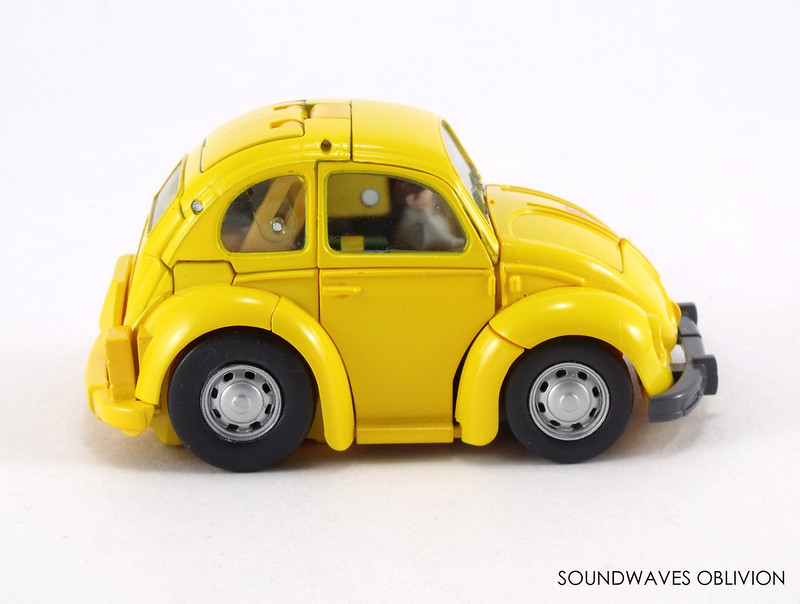 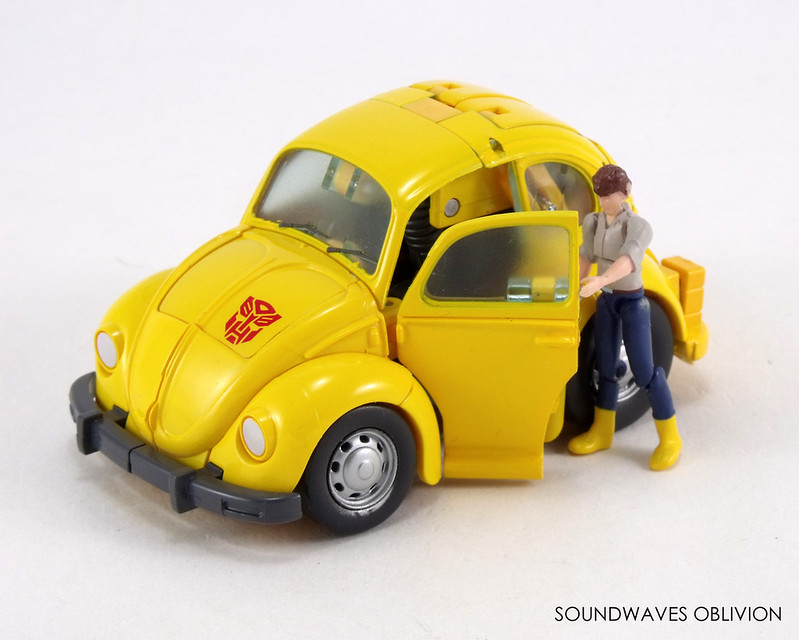 Vehicle Mode: Volkswagen Type 1 (Translated from the instruction pamphlet)
Teletraan 1’s regeneration unit chose the form of a yellow Volkswagen Type 1 Beetle for Bumble. The car mode however is not a regular car but is based on a deformed pullback “Choro-Q” car, popular in the United States under the name “Penny Racers”. This was the origin of the Micro Robot CAR from the “New Microman” toy line where a toy would transform into a robot.
His motto is drive safely; dislikes speeding and rough roads. Despite this though, in the Trans-European Race he had to overcome many obstacles laid out by the Destrons and he demonstrated his ability to keep pace with the Cybertron Super Cars. As a Cybertron vehicle he can operate both on and under water. Bumble is mainly used as a taxi, driving around father and son Sparkplug and Spike as well as Carly and Chip. Bumble’s deformed car mode looks great zipping quickly around. 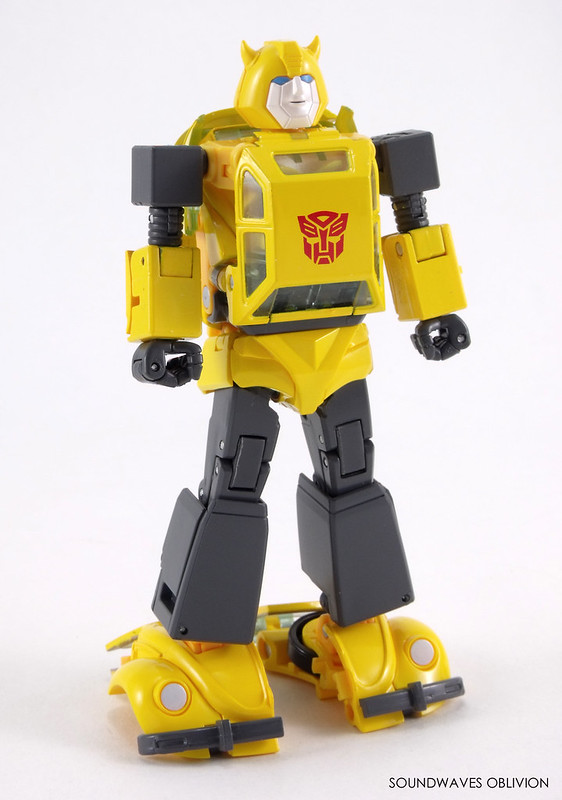 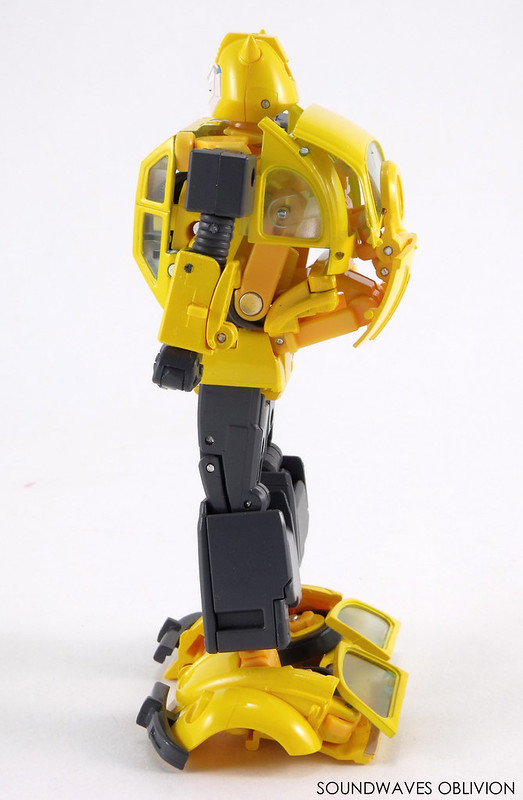 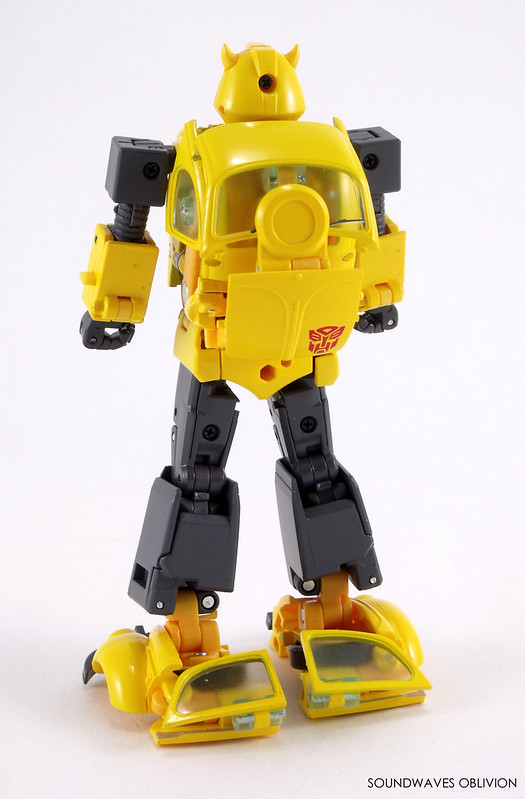 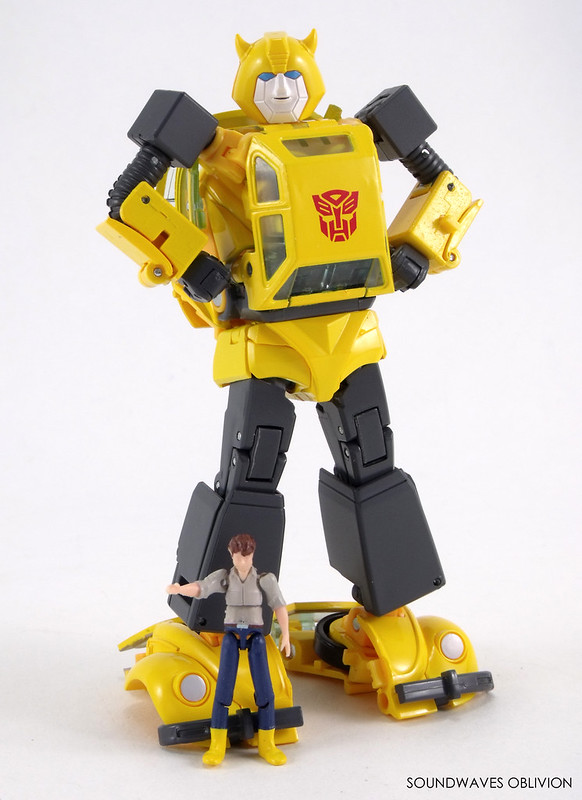 Robot Mode: Bumble (Translated from the instruction pamphlet)
Function: Espionage
Motto: "The least likely can be the most dangerous."
Profile:
Although he isn’t the strongest, his quick wit can turn the tide in battle. Incredibly brave, he would challenge a larger opponent such as Megatron without hesitation. On the other hand, personality wise he comes across as child-like, often dawdles around and is late and often gets captured by the enemy. Greatly admires Commander Convoy, Bumble is cheerful and friendly; it could be said that this super robot lifeform is more than just a robot. Bumbles first mission on Earth was to infiltrate the ruby crystal mine. The first mission he went on with Spike was when they both performed reconnaissance on the Destron’s operation of the Space Bridge. They immediately struck up a friendship and the two eventually became best friends. Following one of Megatron’s schemes which made the Earthlings hostile towards the Cybertrons, only Bumble defended the humans and was proud to call Spike his best friend. Their friendship flourished and continued as Spike grew up. As the only Cybertron who was close with Spike, he was the most relatable to the audience. 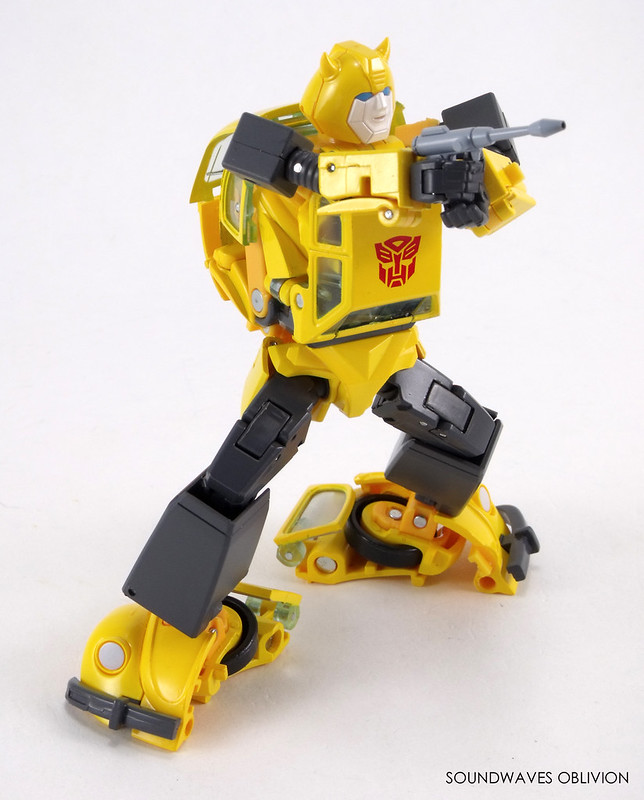 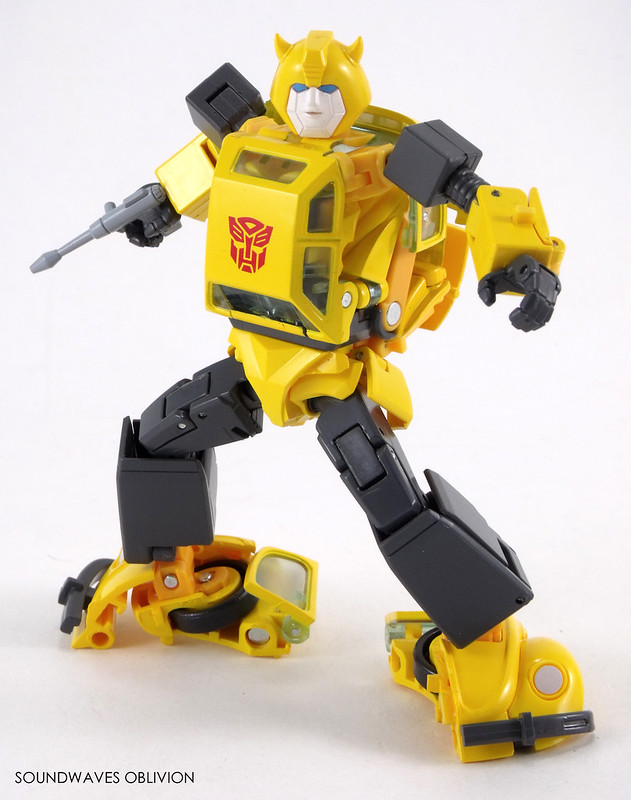 Weapon: Laser Gun (Translated from the instruction pamphlet)
Bumble mainly undertakes non-combat related missions such as reconnaissance but sometimes uses a gun in battle. In the first episode “The Road to Earth” he used a gun in a battle with the Jetrons. 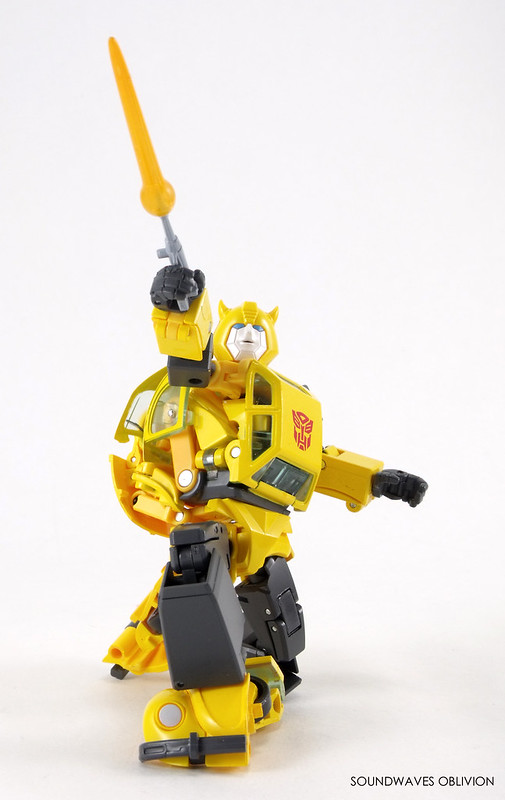 Weapon: Effect Parts (Translated from the instruction pamphlet)
Laser Blast effect part which replicates the shooting scenes. It is a beam extending from a ball of light out of the gun barrel as seen in the cartoon. 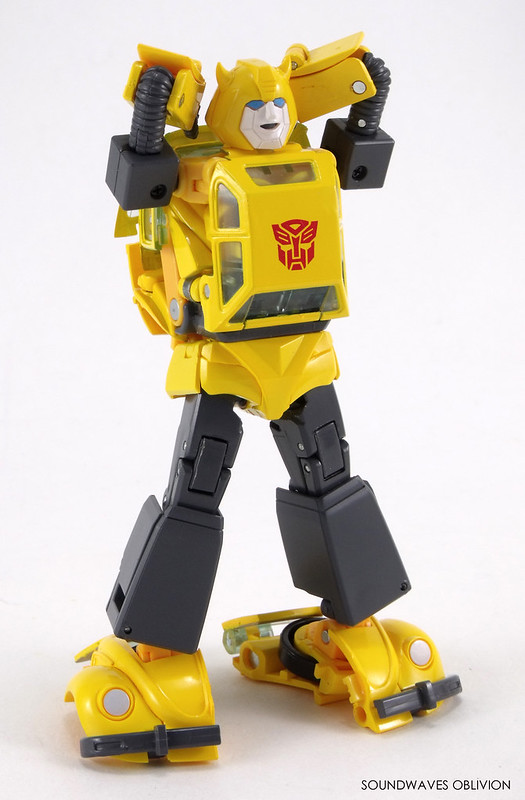 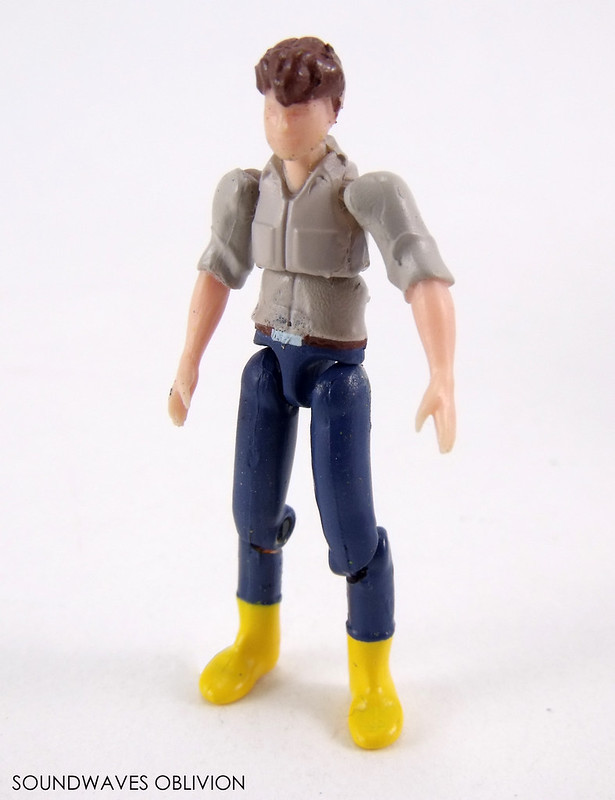 Option: Option Parts (Translated from the instruction pamphlet)
Optional faces with a smile or a surprised look to give Bumble expression. An articulated figure of his best friend Spike is also included. You can reproduce the scenes of him opening and closing Bumbles doors and even sit him inside.