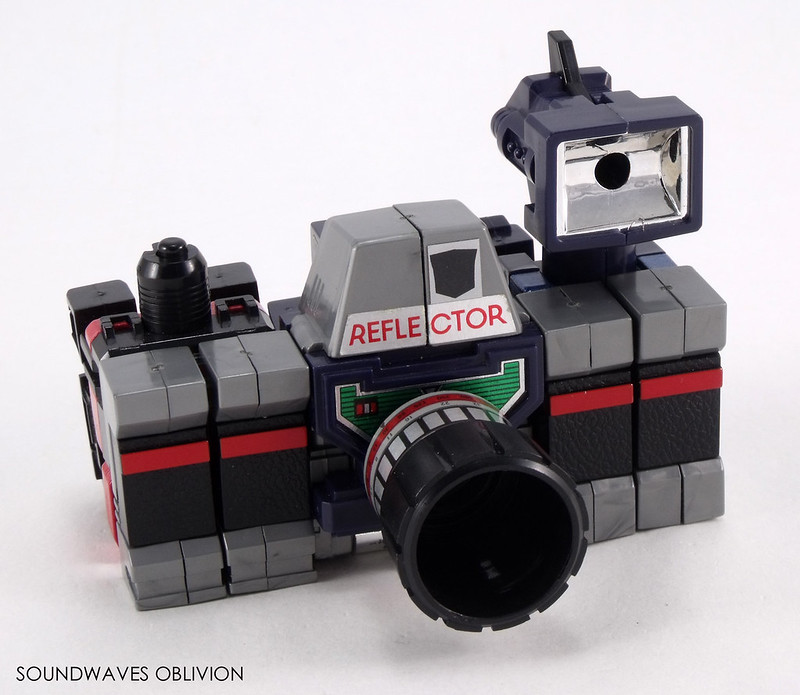 Decepticon Reconnaissance Reflector
Function: Reconnaissance
Motto: "See and you can know, know and you can destroy."
Loves to observe things: vegetation, architecture, Earthen topography, and particularly comrades' mistakes. Likes to blackmail his associates and is impressed with his own ability. Has highly-developed infra-red vision that can record images in darkness through camouflage and at great distances. In camera mode, can emit powerful flash explosion that leaves enemy blind and disorientated for up to 15 seconds.
STR:7; INT:8; SPD:2; END:6; RNK:6; CRG:7; FPR:6; SKL:9 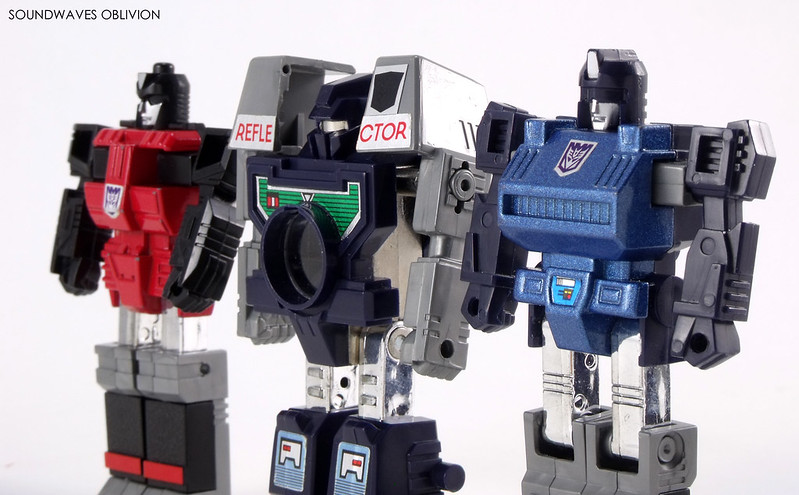 Reflector debuted in the first animated episode "More Than Meets the Eye Part 1" which aired September 1984, the toy however was only made available between 1986 and 1987 in North America and Canada as a mail-away only figure. In Japan Reflector was released by Takara as a mainline figure a year earlier in 1985 amongst the rest of the first wave of toys. For some reason Hasbro were reluctant to release the figure as a mainline toy which was an odd decision seeing as how Reflector was quite a prominent character, at least in the first few episodes anyway. 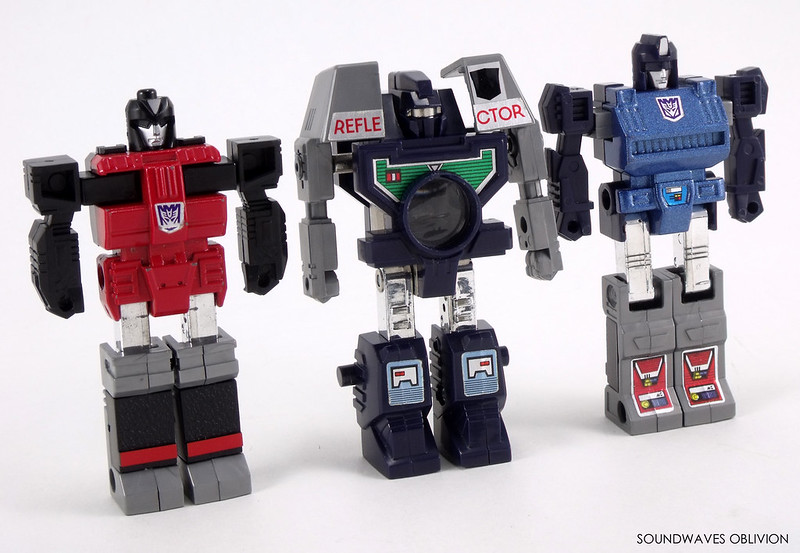 Reflector was intended to be portrayed as separate robots with one hive mind and in the show all three robots spoke simultaneously (voiced by Chris Latta (aka Starscream) in the series). Reflectors memorable scene was in the first episode when Thundercracker wanted a better look at an approaching vehicle. Reflector transformed and mass shifted into his camera form landing in Thundercracker's hands who in turn took a photograph of the vehicle and Reflector printed it out.


Reflector is comprised of three separate robots, Spectro, Viewfinder and Spyglass, each transform into a cube-like shape and they combine with each other to form an early 1980's style camera. The animation models were simplified versions of Viewfinder (other than the lens on Viewfinders chest) sharing an identical colour palette however with the original toy the three figures are different from one another and feature different transformations. 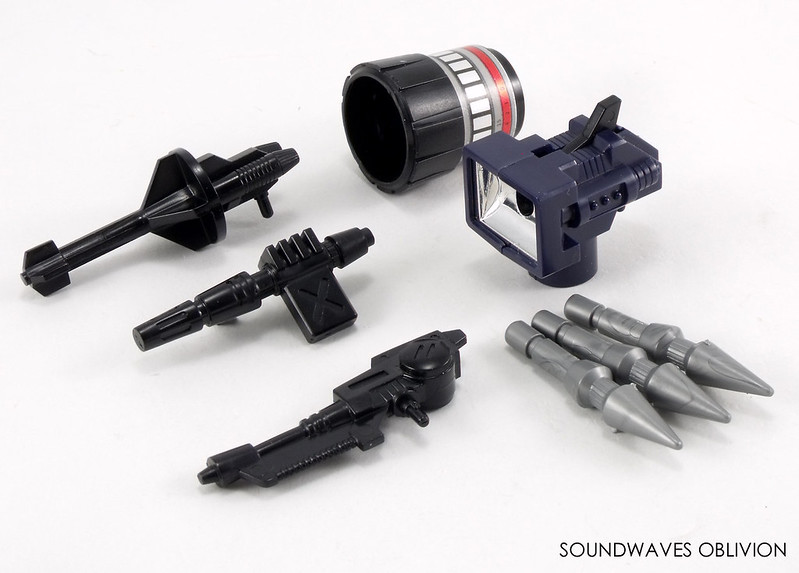 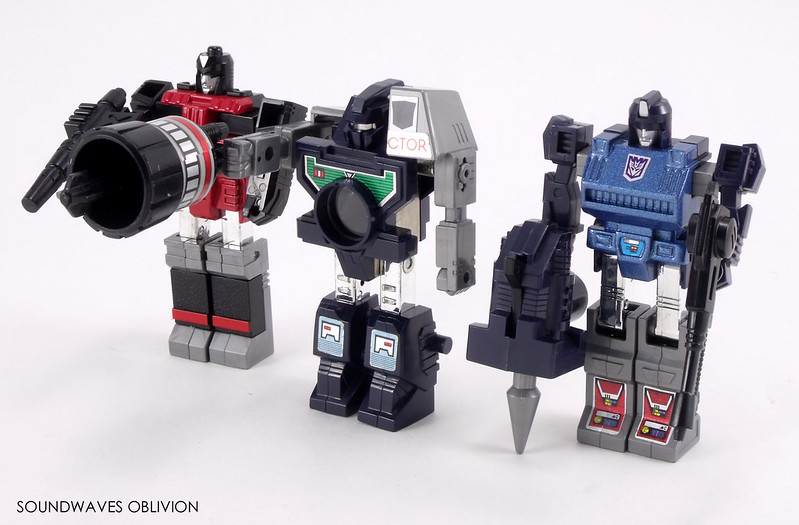 Each robot has an individual weapon, Viewfinders weapon can combine with his telephoto lens accessory which is not depicted in the official instructions. Spyglass can also hold the flash cube with a missile plugged in, unfortunately Hasbro removed the spring so the missiles do not fire. 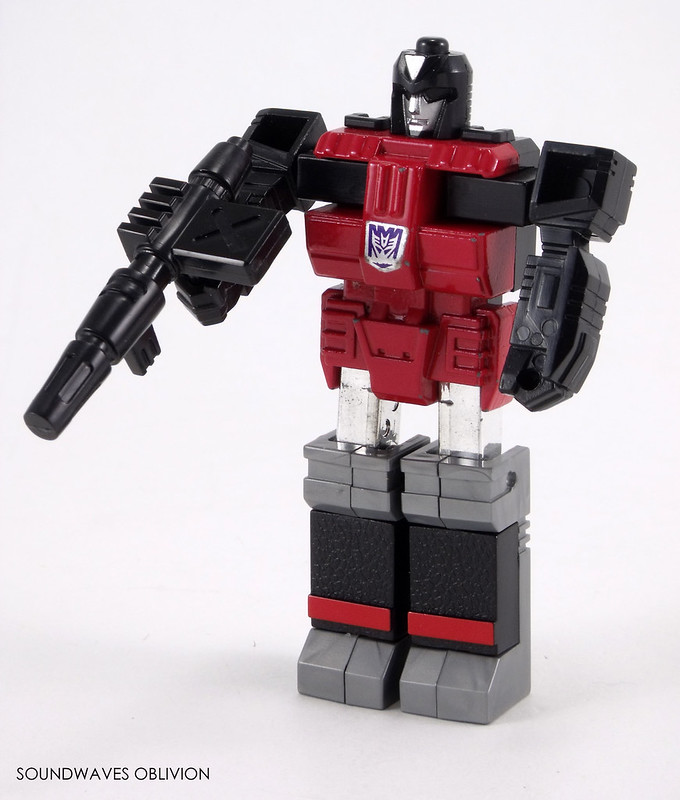 In camera mode there is a button on top of Spectro's head which when depressed gives a satisfying "click" noise. You can also peer through the lens on Viewfinders back just like a working camera which is a nice inclusion. The camera also has an "attack mode" where Viewfinders weapon is plugged into the telephoto lens and a missile can be placed into the flash cube. 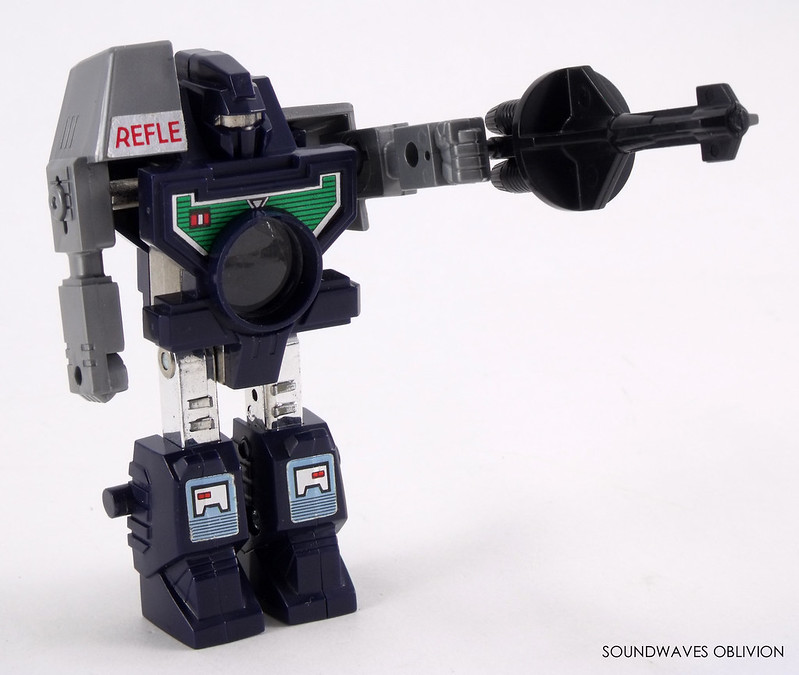 Reflector went 28 years without another toy incarnation; in 2014 a small Targetmaster type figure was packaged with Skrapnel (aka Shrapnel) from the Generations Thrilling 30 toy line. For Botcon 2016 Reflector was released as a Souvenir exclusive, this included three figures who were repaints of the Legends Class Combiner Was Shockwave with new head sculpts. 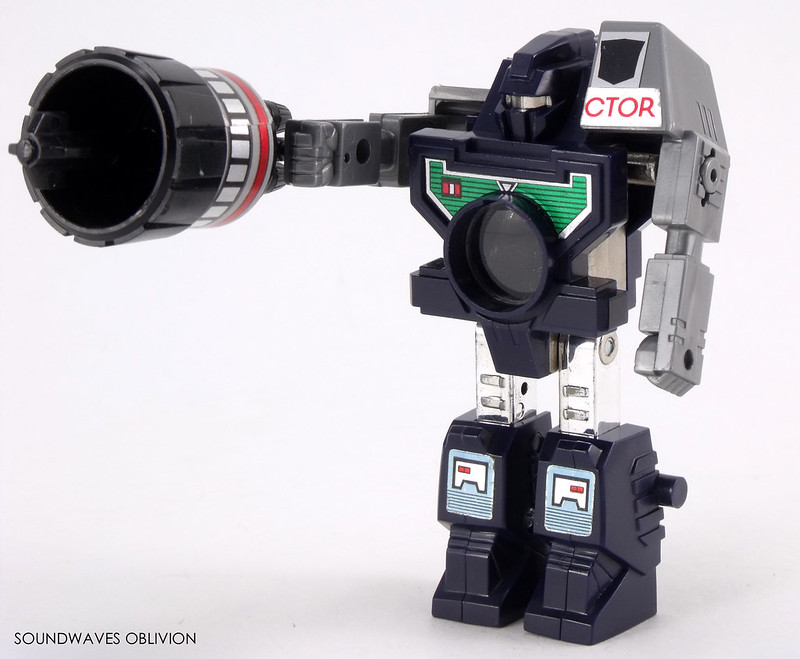 Then in 2019 under the Transformers War for Cybertron: Siege line, Reflector, now called "Refraktor" was released as a deluxe sized figure. This was only the one robot based on the G1 animation model; its alternate mode was a sort of Cybertronian gunship. If you bought 3 individual Deluxe figures you could combine them into a camera mode although this was not shown in the instructions. 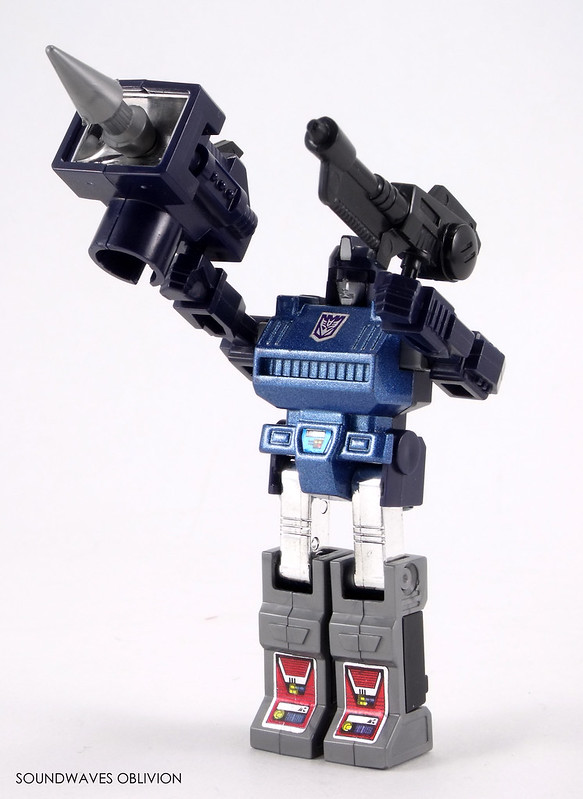 Following this release the "Refraktor Reconnaissance Team 3-Pack" (intended for the cancelled HasCon 2019 event) was released as an online exclusive. This set came in a nice camera styled box and Reflector comes packaged in camera mode along with a small Kremzeek figure. The figure is based on the original G1 Reflector and comes with additional accessories to make the camera mode more authentic, including a flash cube, a grip and shutter button and a vewfinder. 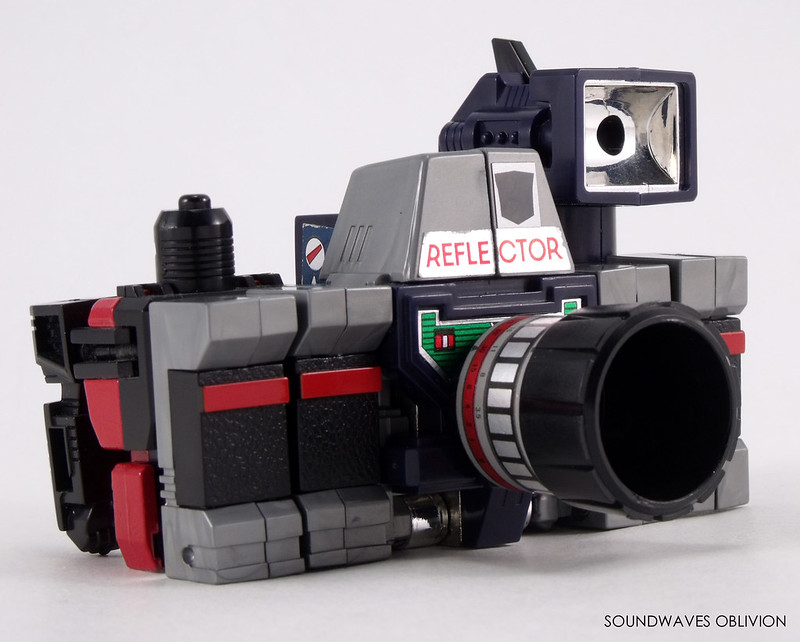 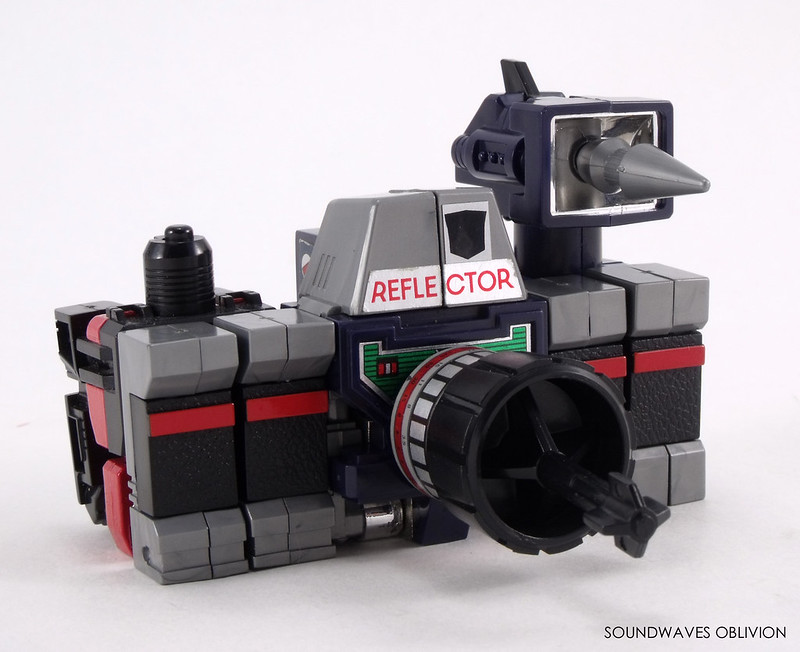 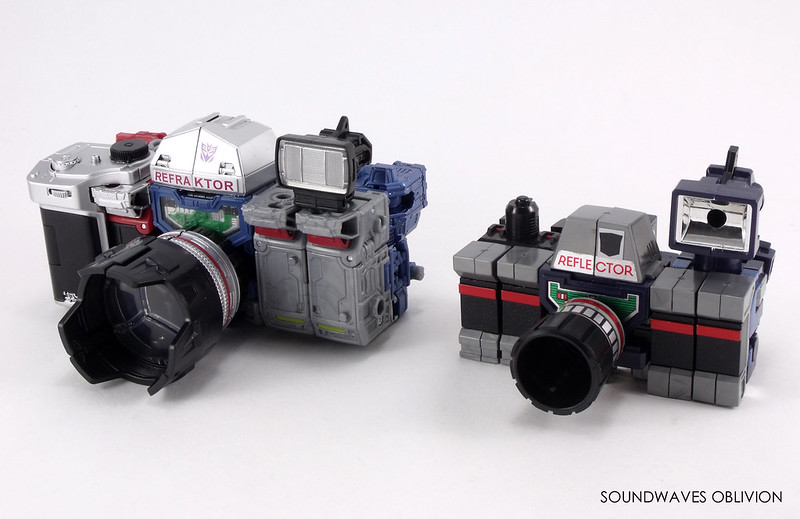 Reflector was originally created for Takara's Micro Change line and was released in 1983 for 1,980 Yen under the name MC-05 Camera Robo. An early design sketch shows that Camera Robo was originally conceived as one robot before the decision was made to split it into three individual robots.


Later design stages show the more familiar Camera Robo design. The images below show the resin prototype and the catalogue shows a coloured drawing of a further prototype which looks very similar to its final release. Note this prototype does not feature the flash cube which is also absent on the final box art for the Micro Change release. 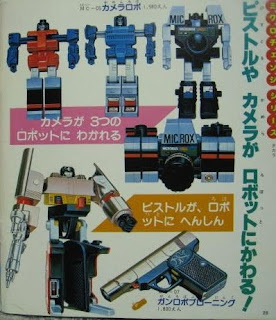 The premise of Camera Robo in the Micro Change series was that originally it was a real camera owned by a boy but it was "modified" by Microman Salam when it was discovered the boy was in danger. The Micro Change figures were inconspicuous household objects that would transform and protect the humans from the evil Acro Aliens, each of the robots had their own special abilities. The individual robots with Camera Robot also had their own names: Micro Shutter (Spectro), Micro Finder (Viewfinder) and Micro Winder (Spyglass). 15 collectors cards were also available by mail order and were similar to the later Transformer collector cards; each of these cards were a secret mission for the owner of the Micro Change figure.


The back of the box features the Micro Change Story for MC-05 Camera Robo Flash Combination with some blurb for each robot. I've translated this below:-


Microman Story
Micro Change alter their appearance into familiar objects. When we are in danger Microman will be alerted through telepathy and come to our aid. The young boy who befriended Salam had taken a photograph one day which showed an Acro Alien shadow. Salam realised the Acro Alien could have attacked so he repurposed the boy's camera into a “Microx”. “Microx” is an ultra high performance camera that can take pictures of other dimensions. The camera can separate into 3 robots (Micro Shutter, Micro Finder and Micro Winder) to face the Acro Aliens and protect the boy!!


The collectors card features similar information as well as detailing the "secret mission":

Secret Instruction No.-06
DATA
Flash Combination
Micro-Shutter: High Speed Offence.
Micro-Finder: Dimensional interception.
Micro-Winder: Battles other dimensional beings.
TOP SECRET
Acroyer is hidden amongst the crowd at today's science show and may cause harm to people. Go to the venue with Takashi and protect people from the evil Acroyer with your dimensional shooting ability.


As well as its release in Japan, Camera Robo was released the following year in 1984 for Joustra's Diaclone line called "Caméra robot".

The box also features a few errors, the photographs of the camera mode show the flash cube on the "Micro Shutter / Spectro" robot and the face of "Micro Winder / Spyglass" is prominently facing forward. On the underside of the box where the included accessories are laid out, the hand gun for Porsche 935 / Jazz in included in place of "Micro Finder / Viewfinders" weapon.

21 Destron Reflector (Tech Spec Translation)
Function: Optical Intelligence Soldier
Transformation: Camera
Ability: With high powered infrared vision he can detect enemies in the dark, even at long distances. Dazzles and confuses enemies with his powerful flash.
Character: Likes to observe the details in Earth’s geography; also has an interest in watching over his comrades. The complexity of his vision however often confuses him.

Takara released Reflector amongst the mainline of Transformer figures and other than the stickers the set was near identical to the Micro Change version. This box set had updated box art, although similar to the Micro Change release, but this artwork now included a flash cube. The name on the camera though had a spelling error saying "REFLECTR". Later releases in Japan used the same moulds as Hasbro's later releases (grey pegs on Viewfinders shoulders to stop the arms sliding off and the hollow section of Spyglass's gun was solid - the photograph above shows the earlier hollow gun).


Early releases of Reflector appear to be identical to the initial Japanese releases with no plastic pegs on Viewfinders arms and Spyglass had a hollow gun. The later and more common releases included the pegs and solid gun.

As with many of the early Transformer / Micro Change and Diaclone figures, high quality knock off's were produced. Some of these examples were even sold at Toys R Us and Kay Bee toy stores in North America. From 2007 a few "high quality" knock offs were being produced in China, one of these was Reflector with two different versions, one was in the white mail-away box and the other was a replica G1 styled box. The mail-away box is very hard to tell apart from the original just from the box alone, the cardboard on the knock off is thinner but this is difficult to see in photographs. As Reflector was not released in a Hasbro G1 styled box the other knock off is easy to spot.

The Convertible Robot to Camera #3


The Variables Robot to Camera #5

This is a slightly over-sized version of Reflector which comes in two different colours. The packaging also varies between Chinese or English text. 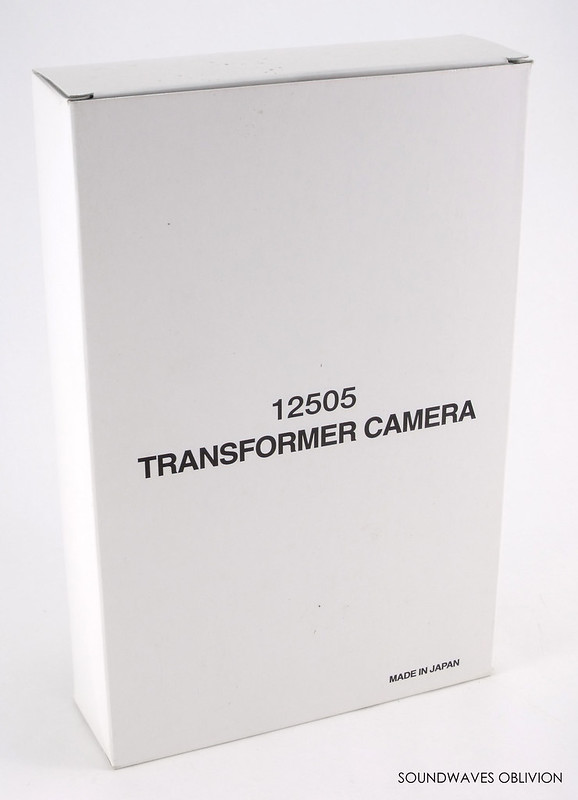 Although the mail-away knock off is hard to tell apart from the original with the box alone, the main give away are the missiles within the sprue. The original missiles are within a square sprue, the knock off does not have a complete square sprue (see photograph below for the comparison).