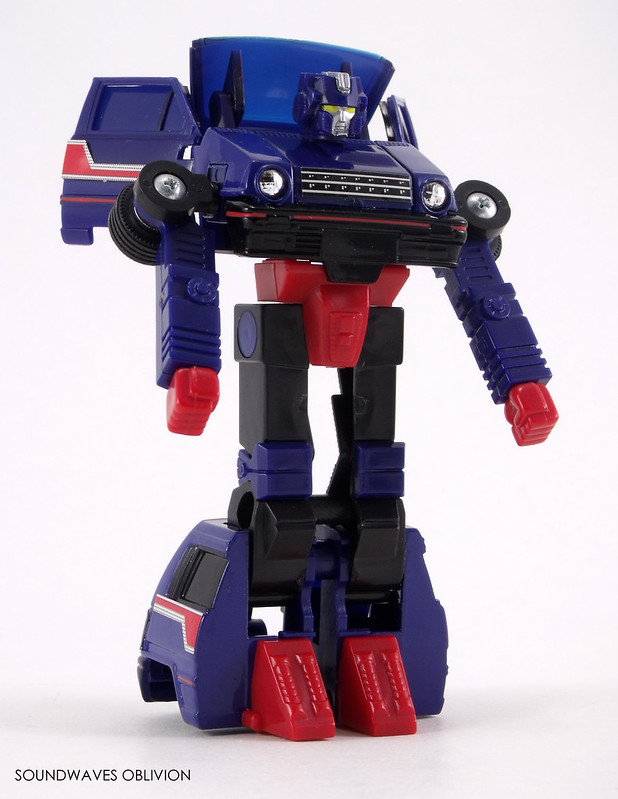 (*Note: The 560 mph is an error present in the tech spec which was corrected by Marvel in their Transformers Universe publications which stated this value should be 50 mph) 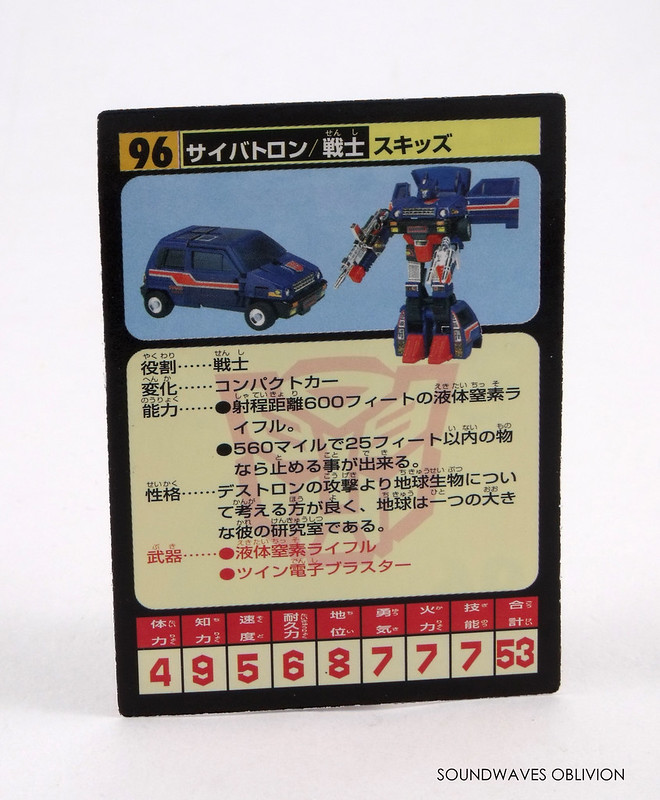 The 2002 reissue of Skids came on the standard "book-box" styled packaging with a front flap held in place by Velcro. When opened there are a series of pages with toy checklists, extended profiles, episode summaries and artwork. These pages can be carefully torn from the perforations and stored in the binder that came with Collection #0 Convoy that was released in 2003. Through the box window you can see Skids laid out with his weapons. 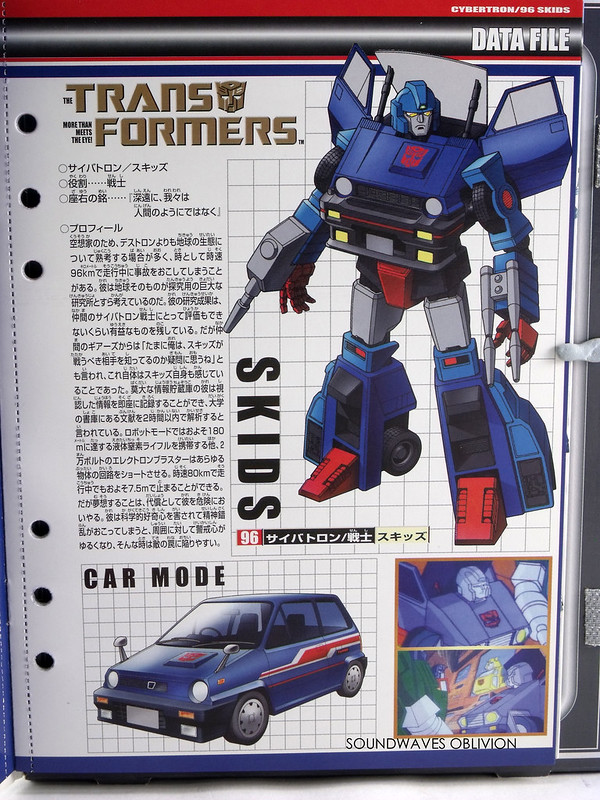 ○ Cybertron Skids
○ Function Warrior
○ Motto: “Deep down, we are more like than unlike humans.”
○ Profile:
A daydreamer, often bumps into things at 96 km/h mph while pondering Earth’s ecology instead of a Decepticon attack. Considers Earth to be one vast laboratory. His research has proven invaluable for his fellow Cybertron warriors. "Sometimes I wonder if he knows who we're fighting," says Gears. Sometimes Skids wonders too. Has an enormous memory storage capacity. He can record visual information virtually instantaneously. has been known to scan an entire university's library literature within two hours. In robot mode he carries a Liquid Nitrogen rifle with a range of 180m and an Electron Blaster which emits 20,000 volts that can short circuit his enemies. Even when travelling at 80 km/h he can stop within 7.5m. His daydreaming often lands him in dangerous situations. When he becomes distracted out of scientific curiosity he loses interest in his surroundings and can fall into enemy traps. 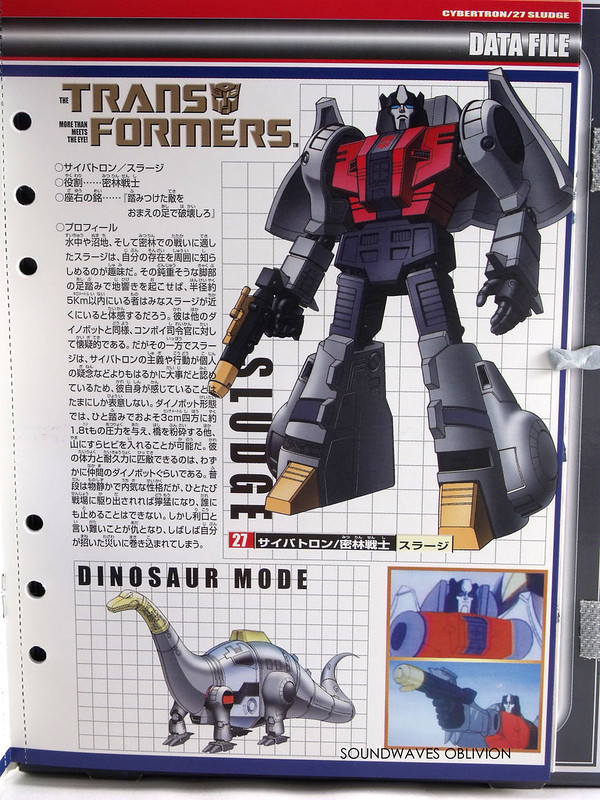 ○ Cybertron Sludge
○ Function: Jungle Warrior
○ Motto: “Stomp your enemy, crush him under your feet.”
○ Profile:
Sludge is adept at fighting in water, marshes and in jungles; likes to make his presence known to everyone. The ground tremors when he makes a few steps with his lumbering legs, anyone in a 5km radius will feel that Sludge is nearby. Like the other Dinobots he is sceptical of Commander Convoy. Sludge however acknowledges the Cybertron cause is far more important than any personal doubts and rarely exhibits his feelings. In Dinobot form he can exert 1.8t of pressure per 3cm2 in a single step, this is enough pressure to crush bridges and crack mountains. Only a few fellow Dinobots can match his strength and endurance. Naturally quiet and shy but when rushing to the battlefield he becomes a ferocious and unstoppable force. He is however not very clever and often falls victim to the calamities he causes.

On the other side of the extended profiles pages are photographs of toys for Skids and Sludge along with details for their previous releases as well as some basic trivia.

Skids:
Released February 1983 “Diaclone Car Robot” No.9.
Released 1984 “The Transformers” Skids.
Released September 1986 “Transformers” VSZ Set (photo*).
Released September 2002 “Transformers Collection 4**” Skids.
In Japan, Skids was initially delayed along with the Cybertron Warrior Sunstreaker, with both not seeing a domestic release individually they were eventually released in a set with the Destron Buzzsaw. Additionally this item is a retooled “Diaclone Car Robot” No.6 with new parts such as a new robot head.

(Note: * refers to an image of the VSZ set on the page. **Incorrectly references this set as  #4 which was Tracks)

Sludge:
Released April 1984 “Diaclone / Dinosaur Robot” No.3 Brontosaurus.
Released 1985 “The Transformers” Dinobot Sludge.
Released August 1985 “Transformers” No.27 Sludge (photo*).
Sludge was released in “The Transformers” line and was near identical to the “Diaclone” release unlike the other Dinobots. In Europe, predominantly the United Kingdom Sludge was reissued in 1991 under the “Transformers Classic” line. Additionally in Japan that same year the Dinobots in the US packaging were offered as Robot Point items and mailed to applicants. 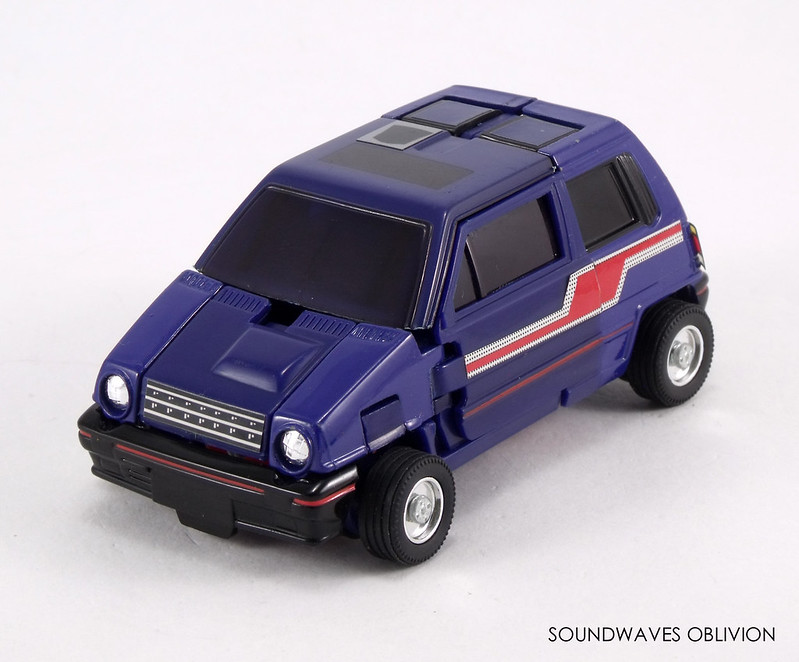 In Japan the Transformers were given designated numbers such as Convoy (Optimus Prime) was "01", Megatron was "16"; however with the initial VSZ set Sunstreaker and Skids were not give numbers. With this 2002 reissue Skids was given the designation "96" which adorned the updated sticker sheet and collectors card. 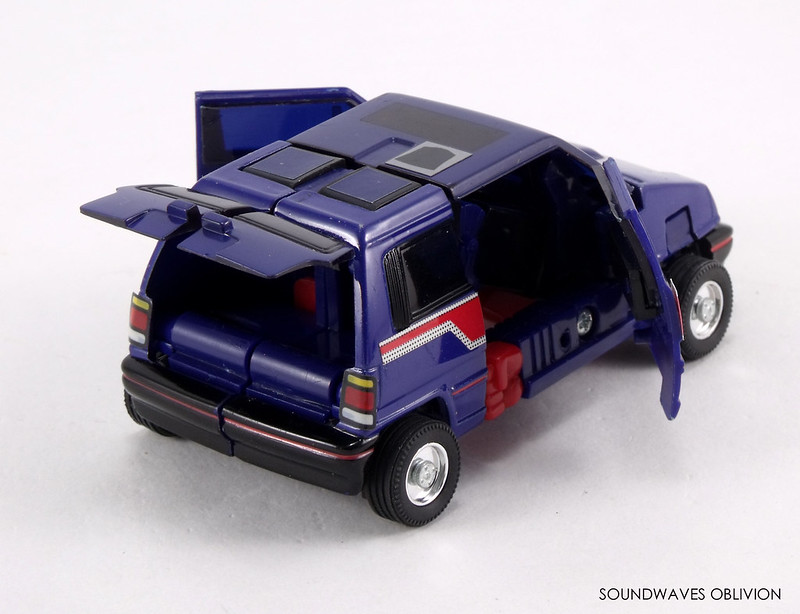 The Skids toy itself is a very small car and apart from the missing wing mirrors it is a very accurate model of the Honda City Turbo. Unfortunately Takara did not include the scooter that came with the original Diaclone but they did include it with the e-Hobby exclusive Crosscut which was also released in 2002. 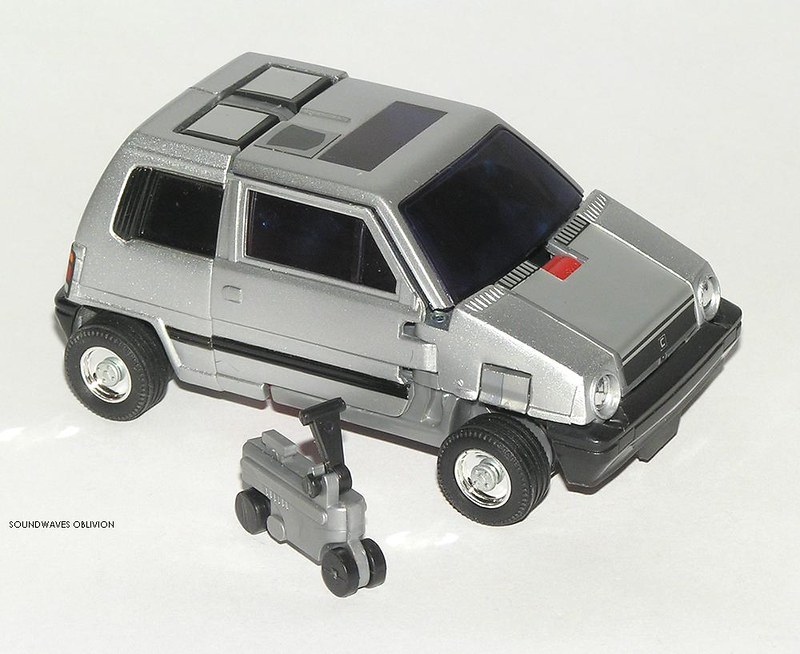 Skids has a few features in vehicle mode such as the opening boot as well as opening doors and bonnet, although the latter two are part of the transformation. Skids has a great transformation and looks good in robot mode and benefits from the added chrome weapons. Unfortunately both Skids and Crosscut do not stand too well because of the wheels that fold under their feet. This is due to excess plastic on the reissues but this can be remedied with careful use of a craft knife. 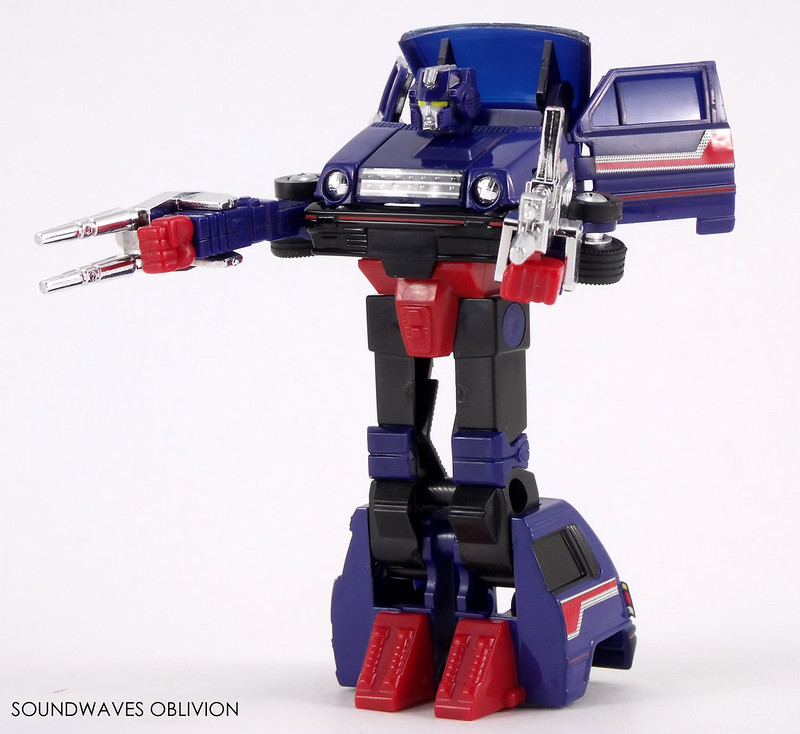 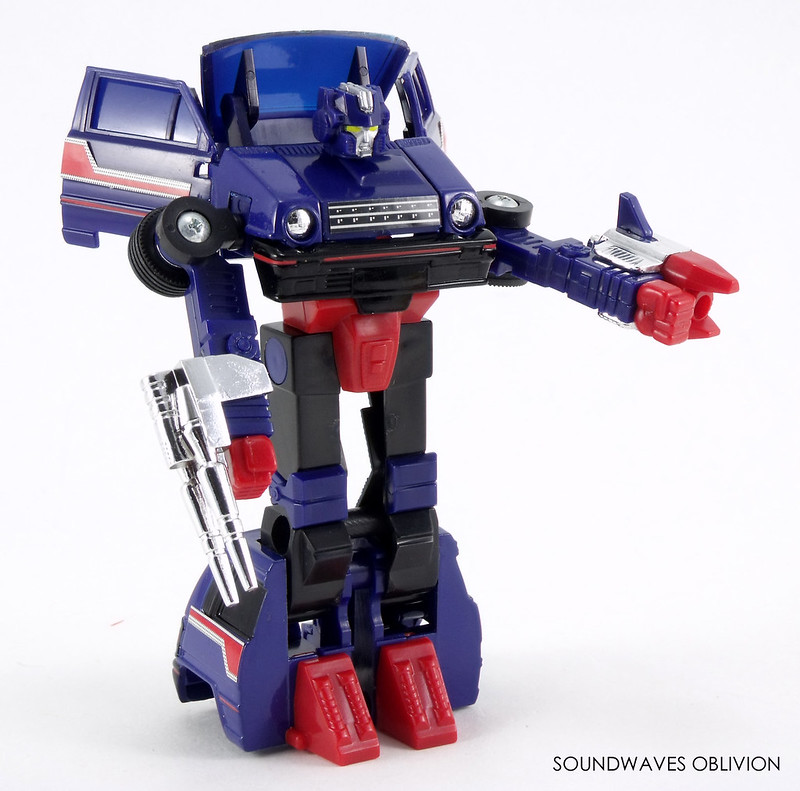 Skids face has nice and sharp details which is nice to see after the mess Takara made of Meister's (Jazz) face (Collection #1). 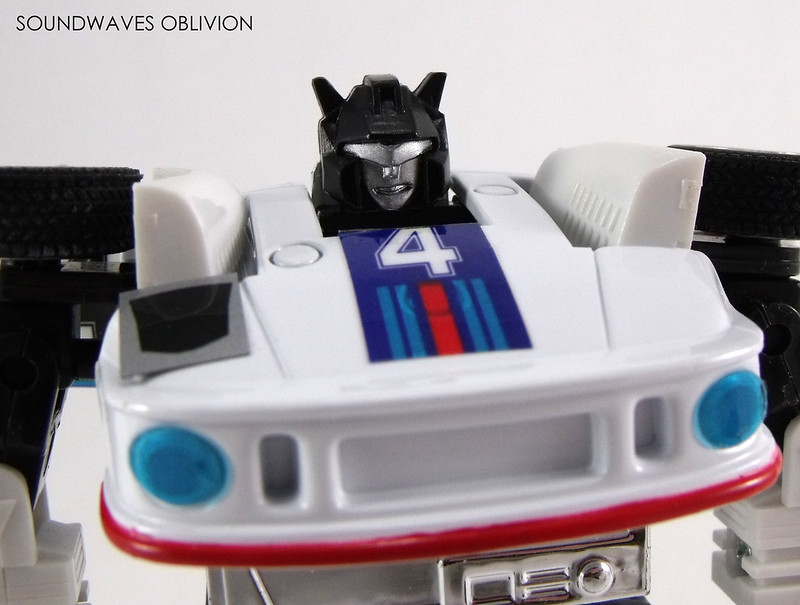 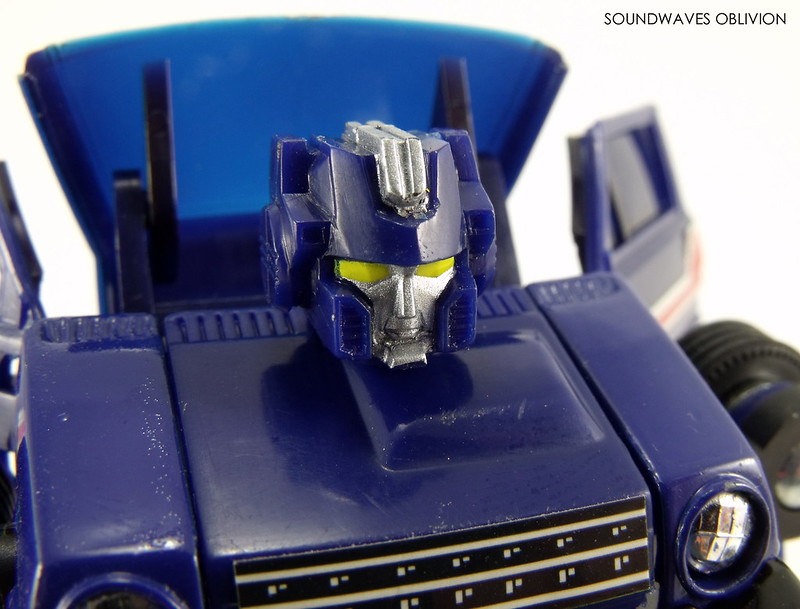 Skids was originally released in Takara's Diaclone Car Robo line called "Honda City Turbo" in early 1983, this itself was a slight remould of the Diaclone "Honda City R" (aka Crosscut) which was released in 1982. The original design for the Honda City Turbo looked slightly different from the finished product as shown in the June 1982 issue of the Japanese Toy Journal magazine. This design was also present in early promotional Diaclone catalogues.

GiG would also release the Honda City Turbo in their Trasformer Auto Robot line up. The blue and red versions with a yellow & orange stripe sticker on the side of the car were released in 1984. In 1985 the Transformers version was packaged in the Diaclone styled box and this also came with a Transformers sticker sheet.

Hasbro would release the blue version of the Honda City Turbo (minus the scooter) as Skids in late 1984 as a mainline character. In the accompanying cartoon series Skids was only seen in two episodes (Quest for Survival & Triple Takeover) and even then was only used as a background character; luckily Skids was fleshed out in the Marvel comics series.


In Japan, Takara would release Skids in 1986 along with Sunstreaker and Buzzsaw in the VSZ giftset. Skids was packaged in robot mode without the roof attached so you would have to clip this on yourself. 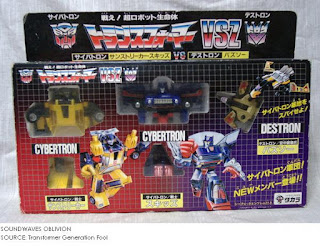 In The Transformers Collection Series in 2002 Skids was released once again in Japan and after this Skids was reissued by Hasbro in 2004 and again by Takara Tomy in 2009 under the Transformers Encore line. Accompanying the 2009 Encore reissue was the Million Publishing exclusive reissues of Skids and Crosscut but in the colours of Skids and Mudflap from the Revenge of the Fallen movie. Mudflap was renamed "Screech" for this release and the set was limited to 2000 pieces. 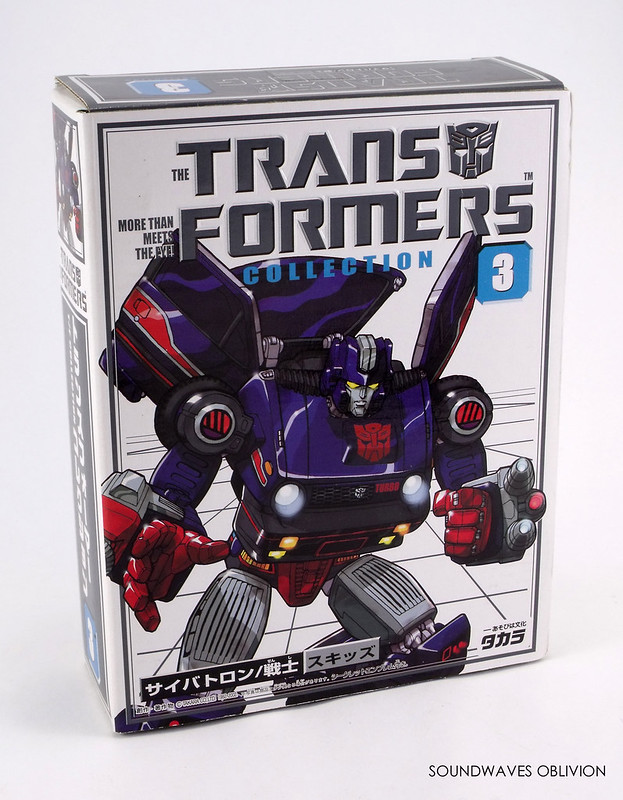