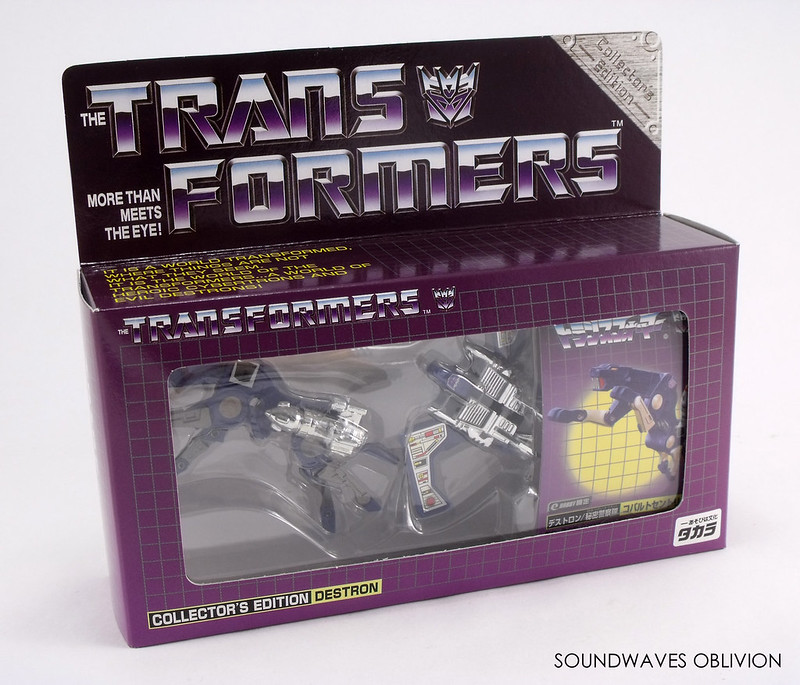 (Profile from e-Hobby.co.jp)
Destron Secret Police Force Cobalt Sentries
A public safety mechanism comprised of elite Destron soldiers. Every member wears blue armour, and they all keep watch on the maintenance of public order on occupied worlds or the activities of traitors within the Destron forces. 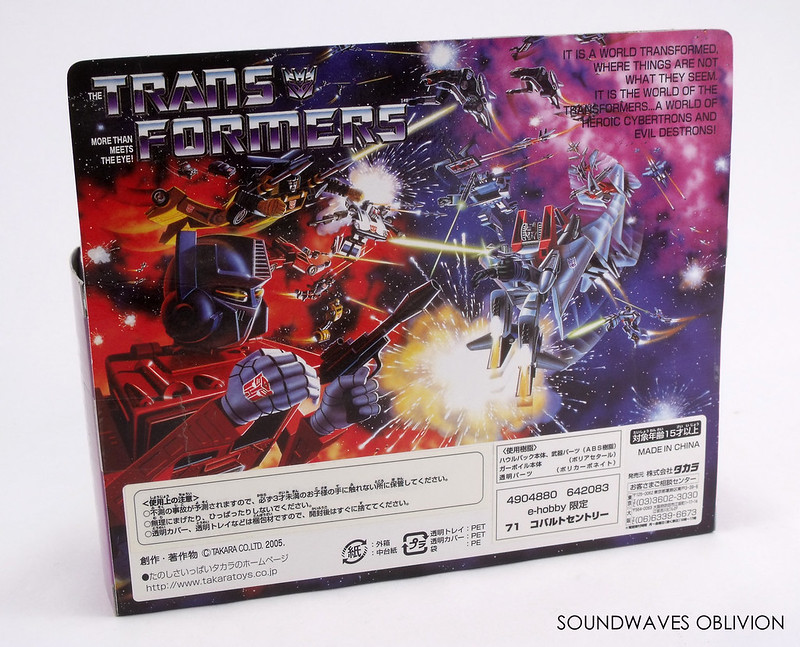 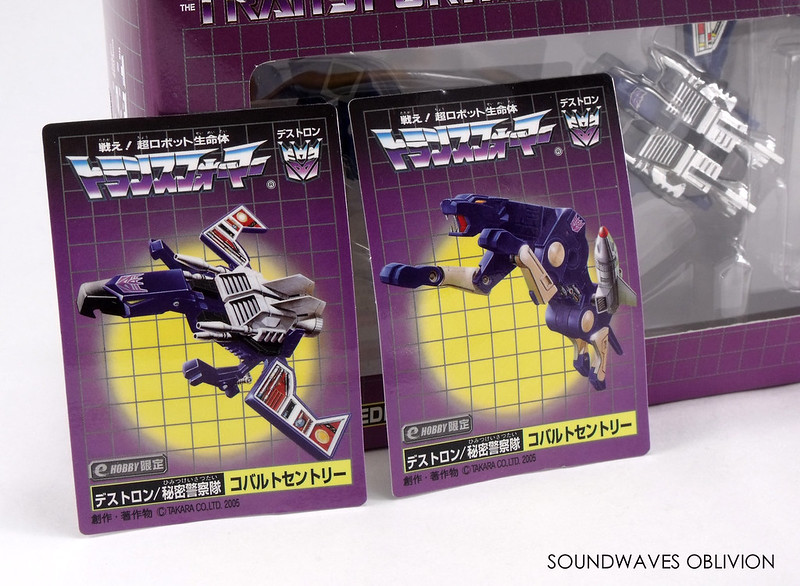 The Cobalt Sentries are an e-Hobby store exclusive first released in 2005 for 2,100 Yen. Comprised of Howlback and Garboil, both are blue repaints of Jaguar (Ravage) and Buzzsaw which had seen a release that same year in the Transformers Collection Series packaged with Soundblaster. As these are straight repaints they retain the Fortress Maximus schematic sticker which can be activated when the cassettes are placed in Soundblaster and viewed through the red door. There was a QC issue with a few of these releases, mainly that a few sets came without Howlback's weapons prompting e-Hobby to send out extra sets to all their customers who purchased the sets, even to those who weren't missing weapons. Now that's good customer service!


The "Cobalt Sentries" are described like a Destron version of the Gestapo. The name cobalt derives from the chemical element of the same name and is used to make the pigment cobalt blue which has been used in Chinese porcelain for hundreds of years. The pigment is toxic is inhaled or ingested. Both their individual names relate to their unique abilities; Garboil is an old English phrase meaning "archaic confusion or disturbance; uproar" and Howlback is a British term for feedback from an auditory channel. 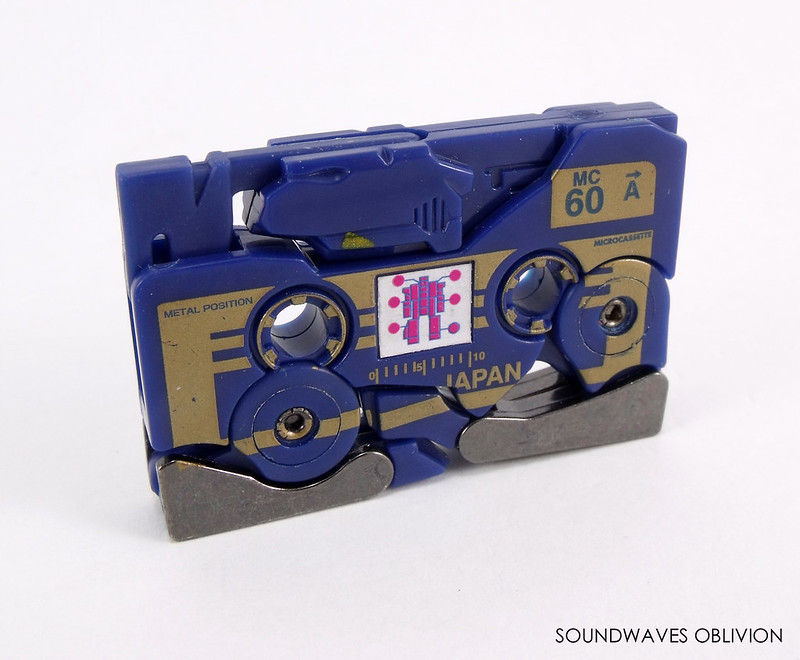 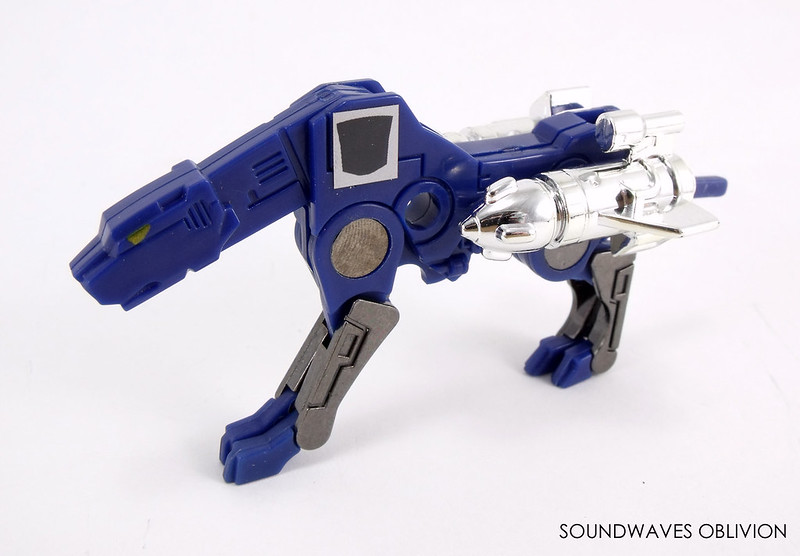 69 Destron Information Control / Howlback (Translated from the character card)
Function: Information Control
Transformation: Cassette Tape
Character: A member of the Cobalt Sentries, a public safety unit attached to the Destron Secret Police, comprised of elite soldiers regularly clad in blue armour. She exercises her abilities suppressing insurgents or exposing resistance activities in the Destron-controlled regions of planet Seibertron or on occupied worlds, and has the unconditional authority to arrest and execute any citizens suspected of disrupting the Destron's steel order. Possessed of graceful bearing and elegance, she is also extremely severe and uncompromising, and will silence back talking subordinates with a sharp roar. In combat, she employs a Feedbacker Shield, which absorbs, modulates, and redirects energy weapons back at enemies.
Weapons: Multi-Track Missiles
STR:5; INT:8; SPD:6; END:7; RNK:8; CRG:10; FPR:7; SKL:6; TTL: 57 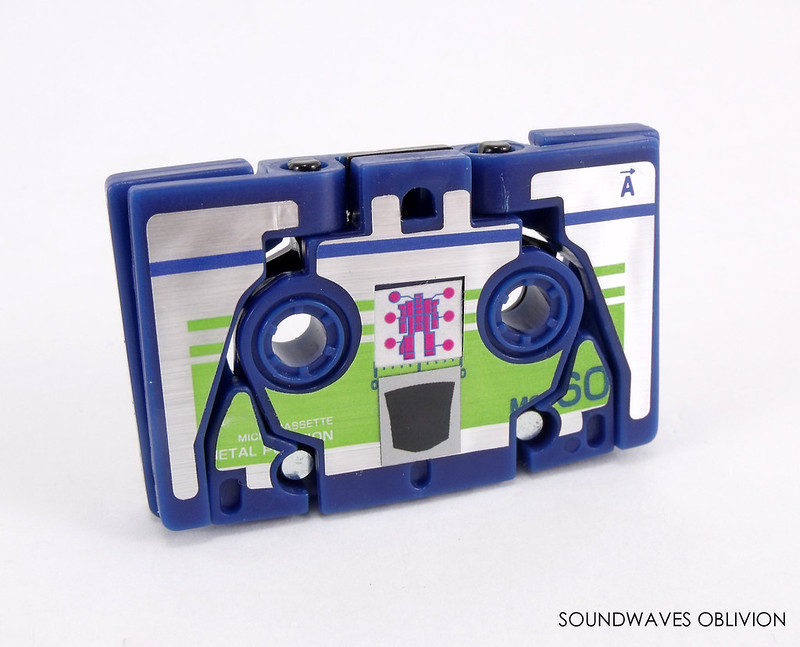 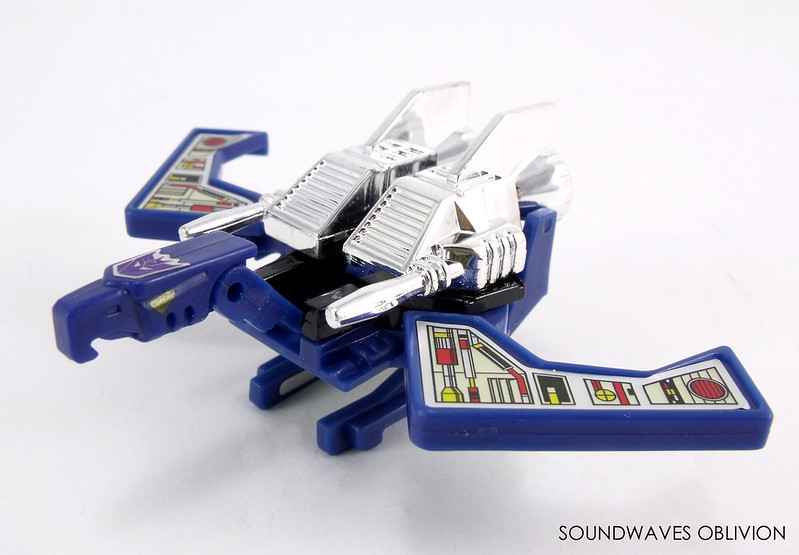 70 Destron Information Control / Garboil (Translated from the character card)
Function: Information Control
Transformation: Cassette Tape
Character: A member of the Cobalt Sentries, the public safety arm of the Destron Secret Police, Garboil is familiar with the personal information of countless Destron soldiers, and observes in detail each one's ulterior motives, plots being executed, or treasonous conduct. His duty is to ascertain the results and select those evaluated as suitable for the evil elite. However, he tolerates absolutely no resistance in the nations and worlds under Destron government and suppresses the controlled citizens through fear, pain, and total management of information. When in battle, he can blare out from his vocal processors a directional, cacophonic blast that includes an override signal, using it to render enemy robots into a state of panic.
Weapons: Photon Masers
STR:5; INT:8; SPD:7; END:8; RNK:8; CRG:6; FPR:3; SKL:9; TTL: 54 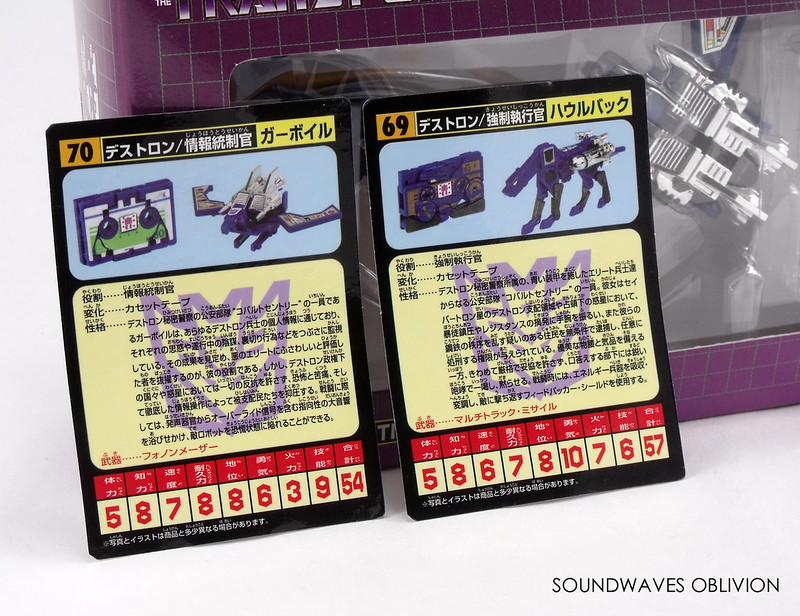 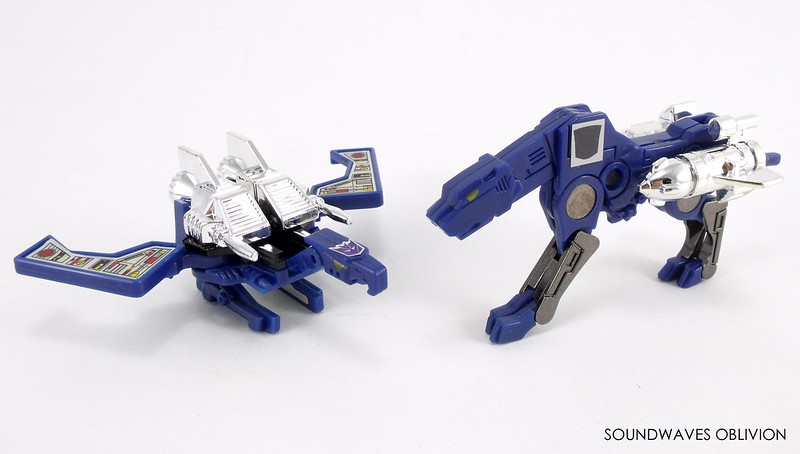 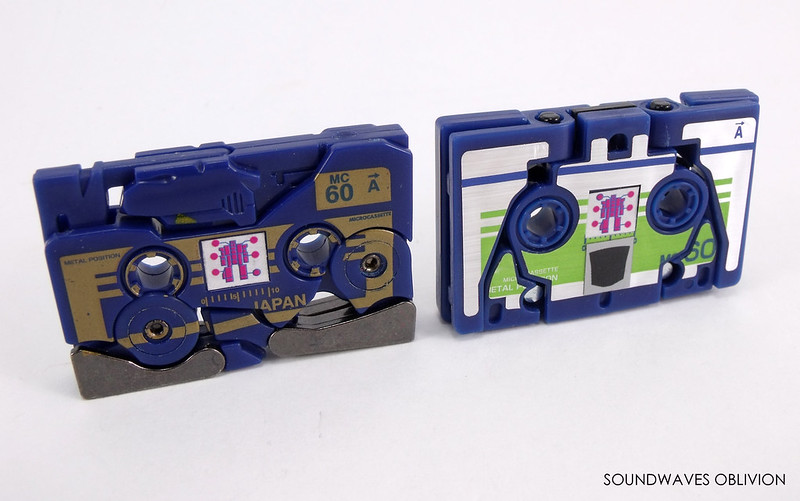 In Takara's original 1983 Micro Change toy line, the Micro Cassettes Condor and Jaguar were released in different colours to bulk up the series, Jaguar in black and blue and Condor in red and blue. The Micro Cassettes had their own tech specs printed on the paper within their cassette cases. The originals do have a better quality about them compared to the reissues, the plastic is solid and glossy, the eyes are shiny gold in colour instead of a matt gold finish. 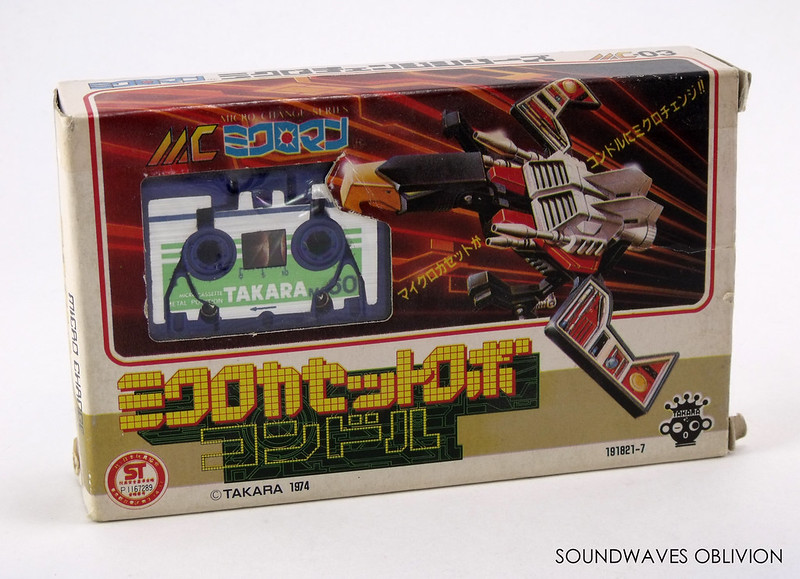 MC-02 Micro Cassette Robo Jaguar
Running Speed: 80 km/h
Operational Time: 60 minutes
Radar Radius: 10km
When in its cassette state place it in the designated barrier case.
Do not put this item in a real tape recorder.

MC-03 Micro Cassette Robo Condor
Flight Speed: 150 km/h
Operational Time: 60 minutes
Radar Radius: 15km
When in its cassette state place it in the designated barrier case.
Do not put this item in a real tape recorder. 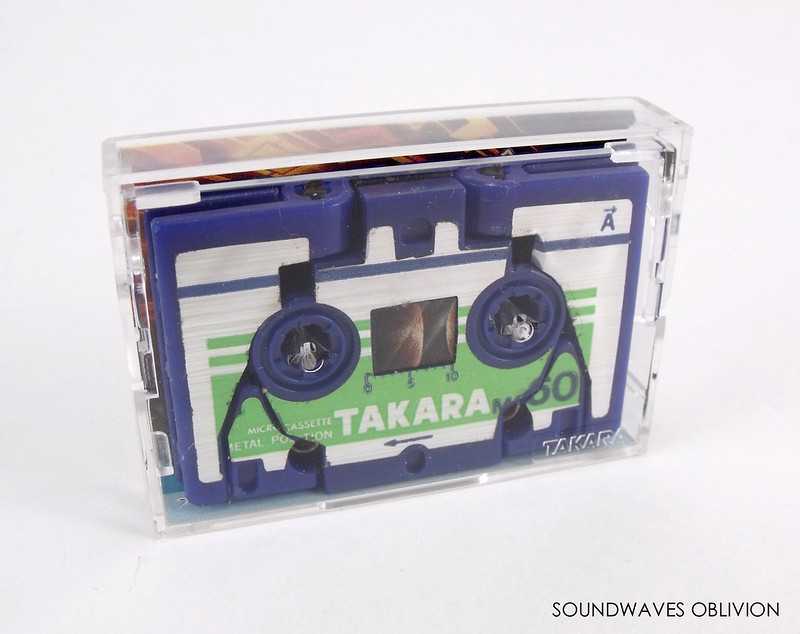 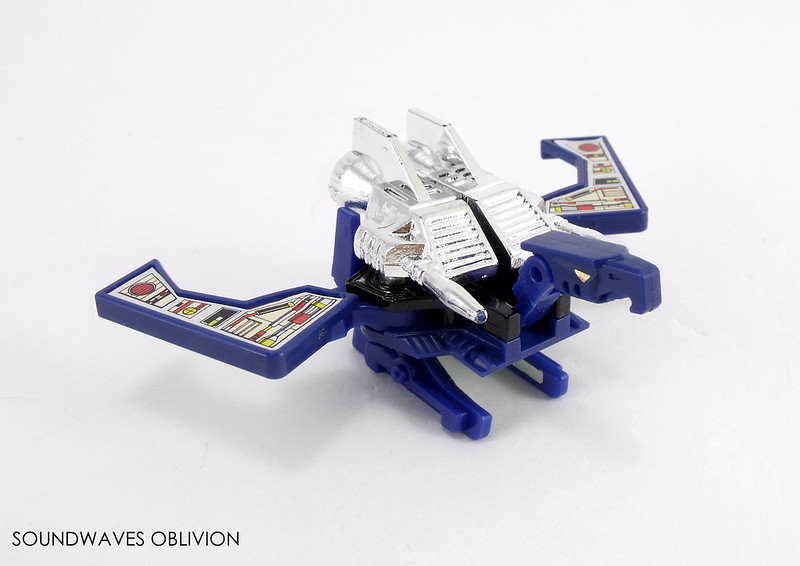 Since these e-Hobby releases, Garboil has not seen an updated toy release but he was mentioned in Masterpiece MP-42 Cordon's bio when he attempted to recruit Cordon for the Cobalt Sentry unit. Howlback has seen one further toy update in 2018 being released with the Bumblebee Cassette Pack which was a blue redeco of the Titans Return Legends Class Ravage. 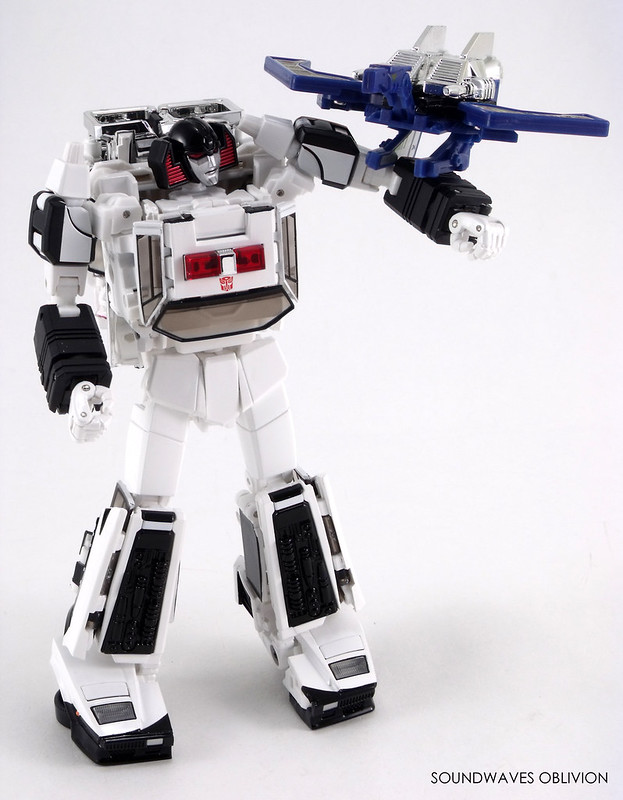