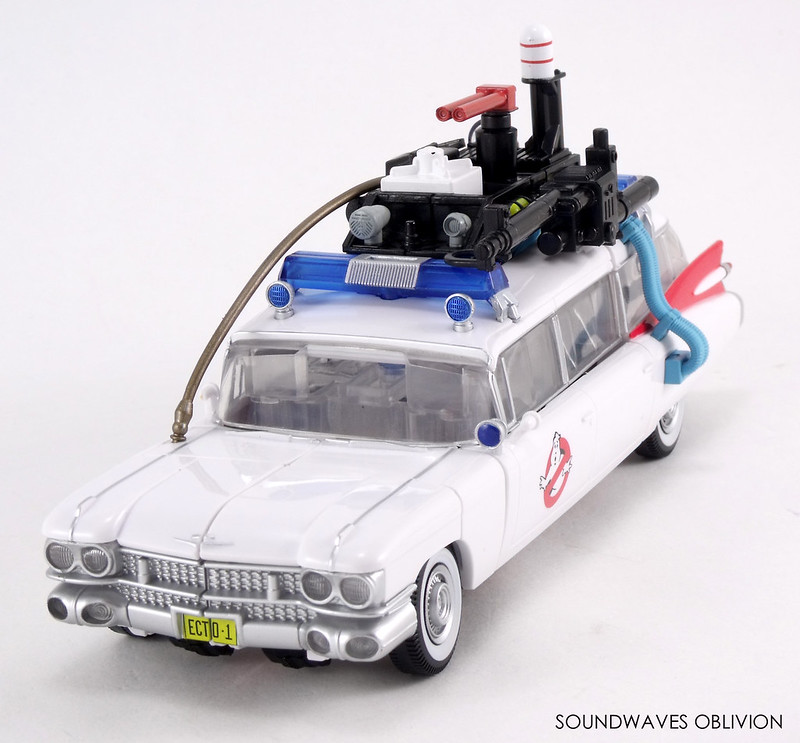 Autobot Ectotron
Function: Paranormal Investigator
"When life splatters you with marshmallow goo, just go with it."
When the Ghostbusters need a ride to the next paranormal hotspot, it's nice to have one who can also handle a Proton Pack.
STR: 8; INT: 7; SPD: 7; FBL: 6; GTR*: 10; GBU**: 7 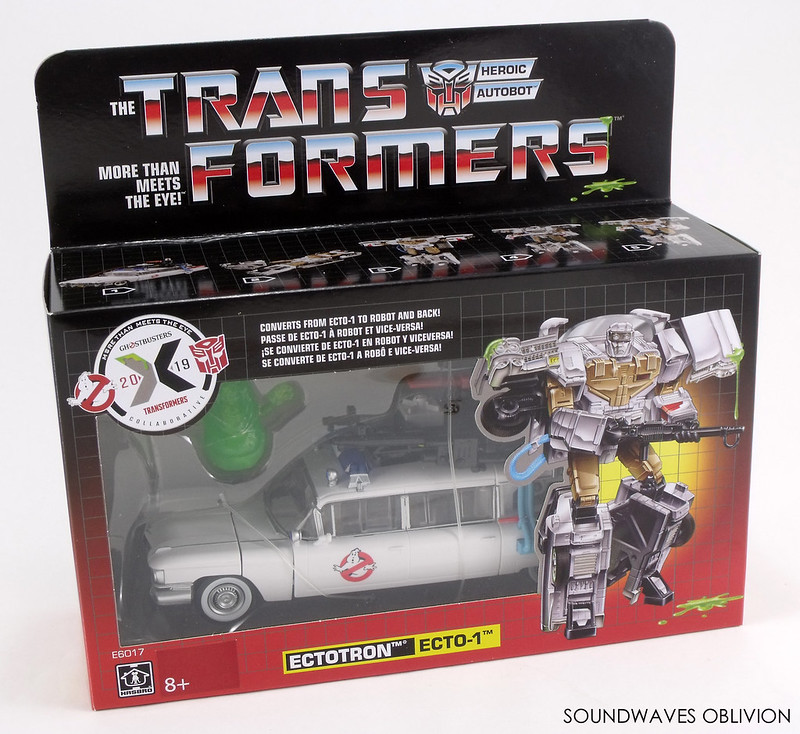 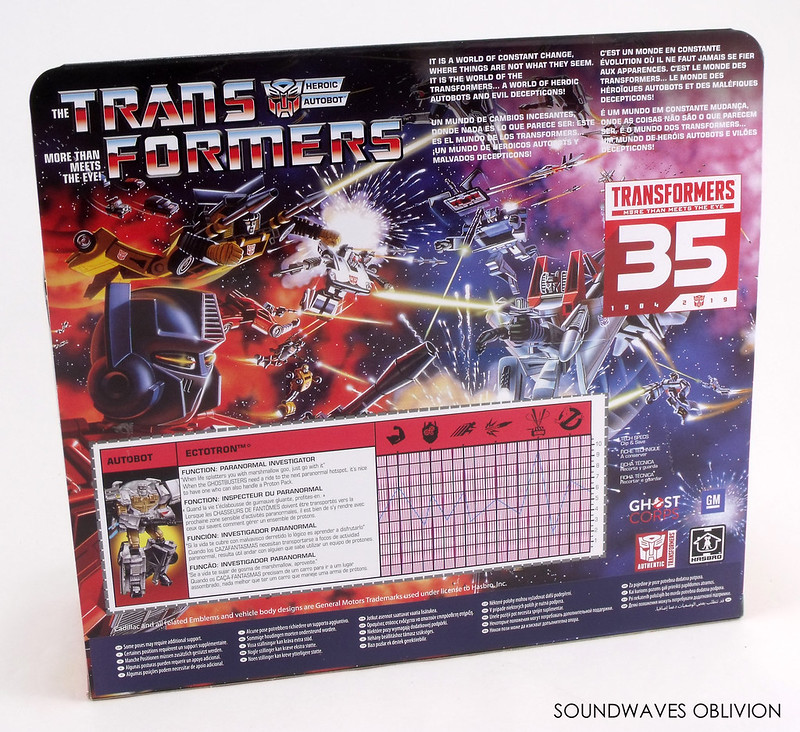 Released February 2019 on Hasbro Pulse Ectotron was the first Ghostbusters / Transformers crossover (the second being MP-10G Optimus Prime) and is based on the Ecto-1 vehicle as seen in the original 1984 Ghostbusters film. 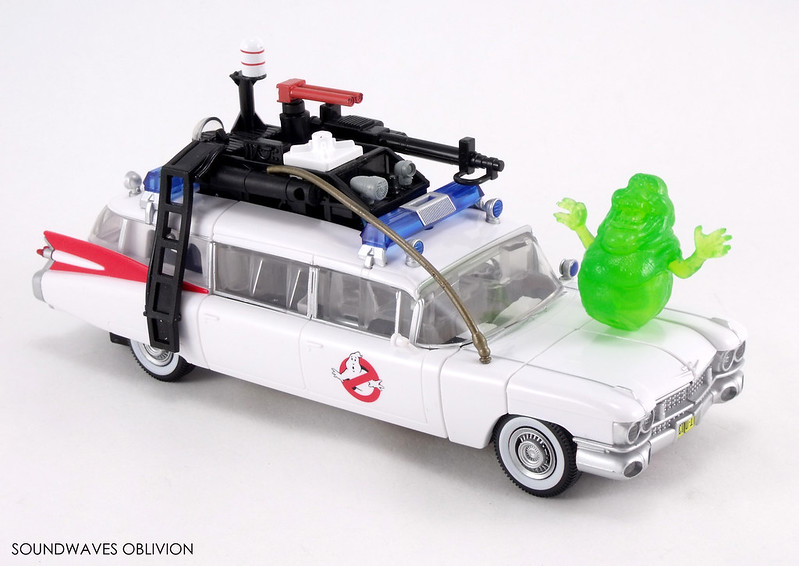 The Ecto-1 (aka Ectomobile) designed by Stephen Dane in 1983 and built by prop masters from the Burbank Studios Mill, was created from a 1959 Cadillac 6890 which had been outfitted as an ambulance / hearse combination by the Ohio based Miller-Meteor coach company. Stephen Dane also designed the Proton Packs and the Ghost Trap.


The first time the vehicle is seen, it is black with coats of grey primer on the body work and was being driven by Dan Aykroyd (Ray Stantz in the film). However the black and grey primer car was not turned into the Ecto-1 in real life. That vehicle was originally operated by the Bellwood (Chicago, Illinois) Fire Department  and was painted red and in 1982 was sold into private hands. When the vehicle was rented to Columbia Pictures it was painted in the black and grey primer for the short scene. The vehicle was later sold to a Illinois paramedic; other sources state Columbia Pictures bought the vehicle which contradicts statements from the original owner.


The studio only bought the one vehicle, a Desert Rose coloured Cadillac which would end up being turned into the now famous Ectomobile. The actual car is quite large in size being 21 foot long, 6.5 foot wide and 8 foot tall. 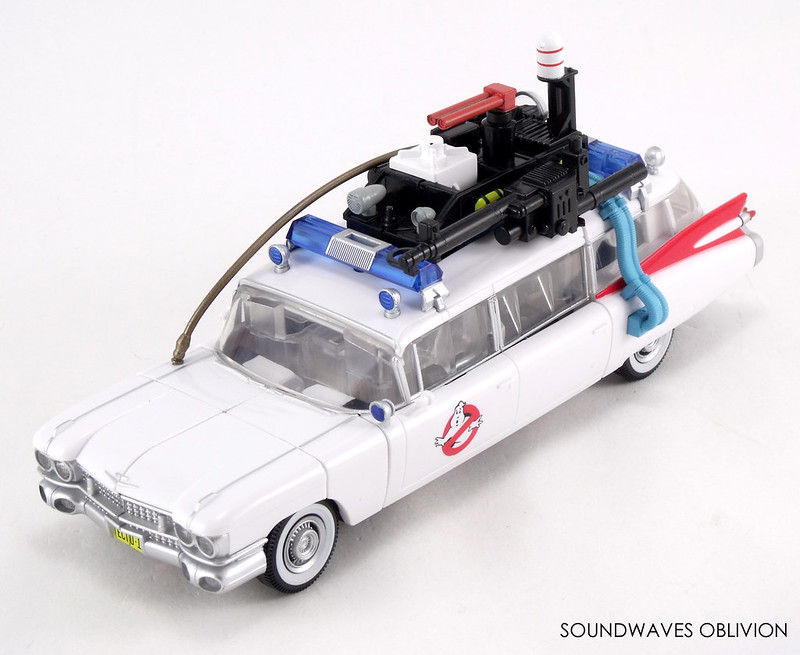 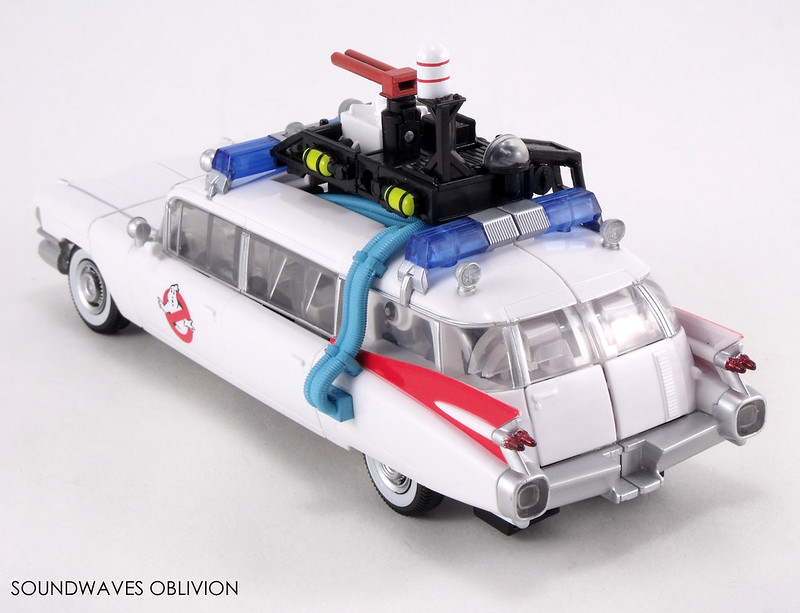 In 2019 both Ghostbusters and Transformers celebrate their 35th anniversary and because of this Ectrotron comes in a 1984 styled box which is a nice touch. Ectotron is packaged in his fully licensed Ecto-1 alternate mode and also comes with a translucent green "Slimer" figure made out of a hard rubber which is a nice representation of the ghost as seen in the original film. This same Slimer figure was reused in the Masterpiece MP-10G Optimus Prime release albeit that Slimer was now painted.


The vehicle mode is an excellent representation of the Ectomobile compete with the roof equipment and hoses sunning down the vehicle. Ectotrons Blaster also attaches to the side of the rack for storage. The vehicle mode includes a lot of details Hasbro would usually leave out of their Transformers such as painted wheel rims. The roof rack however is not fully detailed as the long cylinder has not been painted yellow despite the smaller cylinders on the other side being painted. Additionally the vehicle is missing the Ghostbusters logo from the rear door. 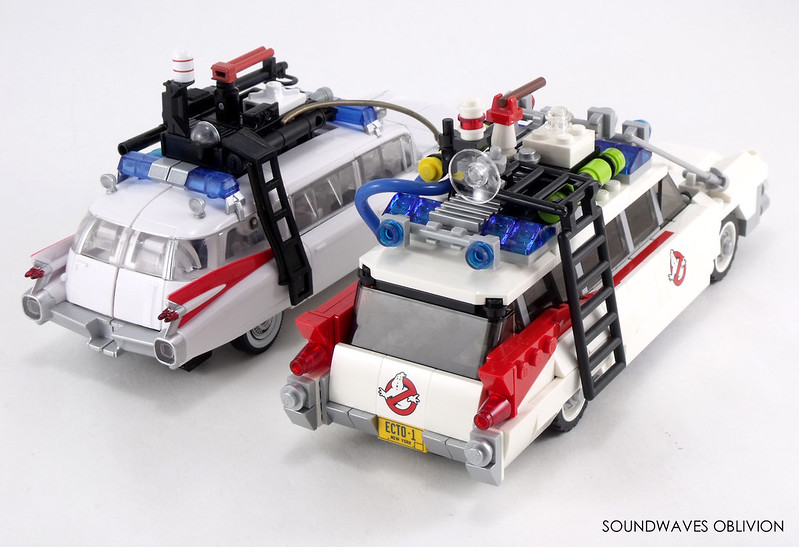 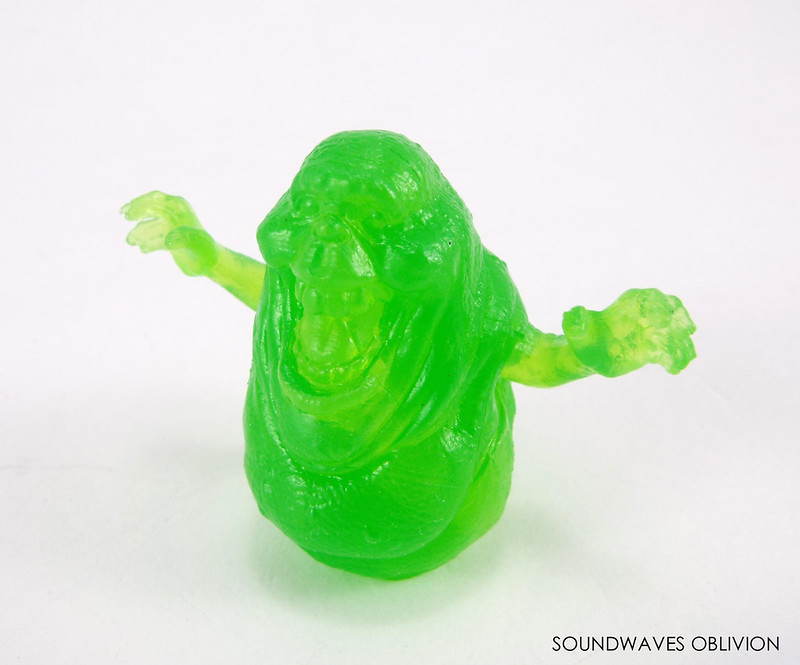 Transformation to robot mode is quite simple and seeing as this figure is an extensive retool of Combiner Wars Hot Spot, it is not immediately obvious. Ectotron is almost a "parts-former" as the roof rack is completely removed from the vehicle mode but this does transform into his Proton Pack. 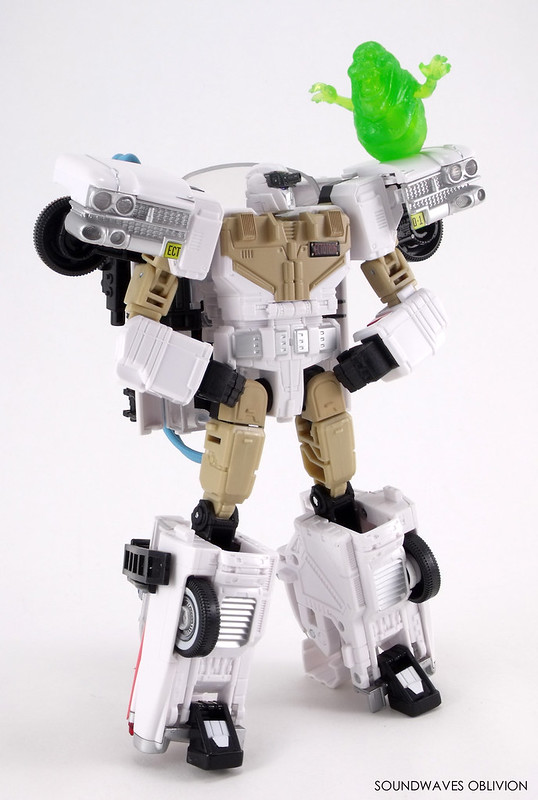 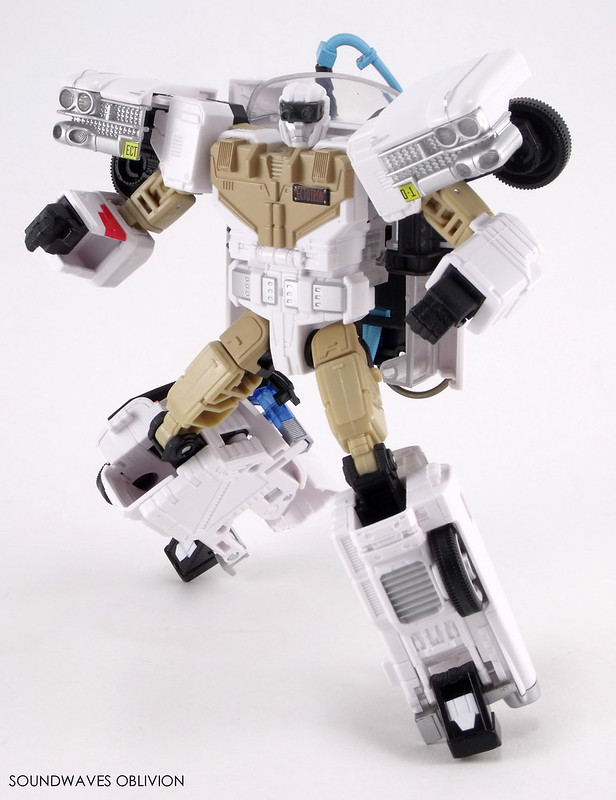 In robot mode Ectotron's torso and waist has a similar design to the Ghostbusters overalls and even has a name badge in the same style on his chest. The beige colouring in robot mode is based on the colour of the Ghostbusters overalls. Ectotron is even wearing a pair of Ecto Goggles that Ray Stantz wore. The goggles do not completely cover Ectotron's eyes are are not removable. 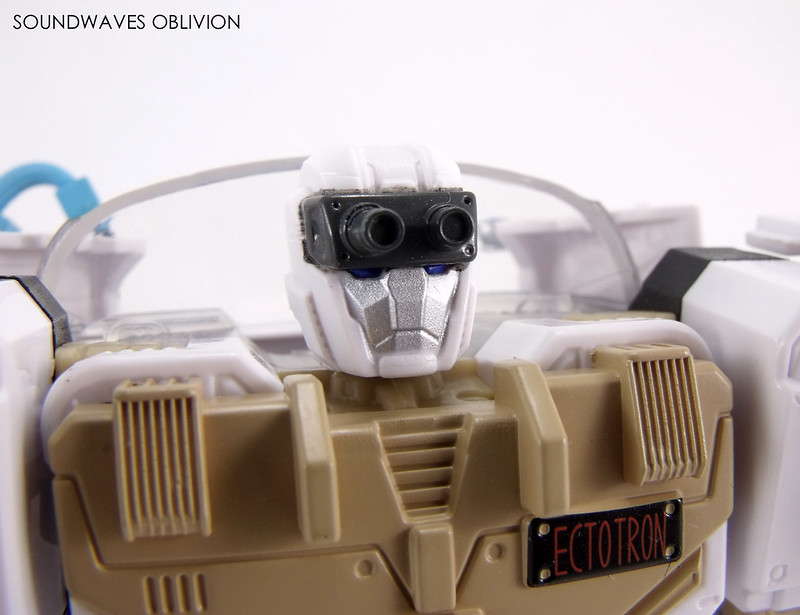 The figure has reasonable articulation but obviously not Masterpiece standard. The Proton Pack does not stay on very well and when Ectrotron holds the blaster the rubber hose that plugs in does not stay attached very well. The rubber is painted blue and I can see that rubbing away over time. When the hose is attached it does limit the robots posability with the weapon. 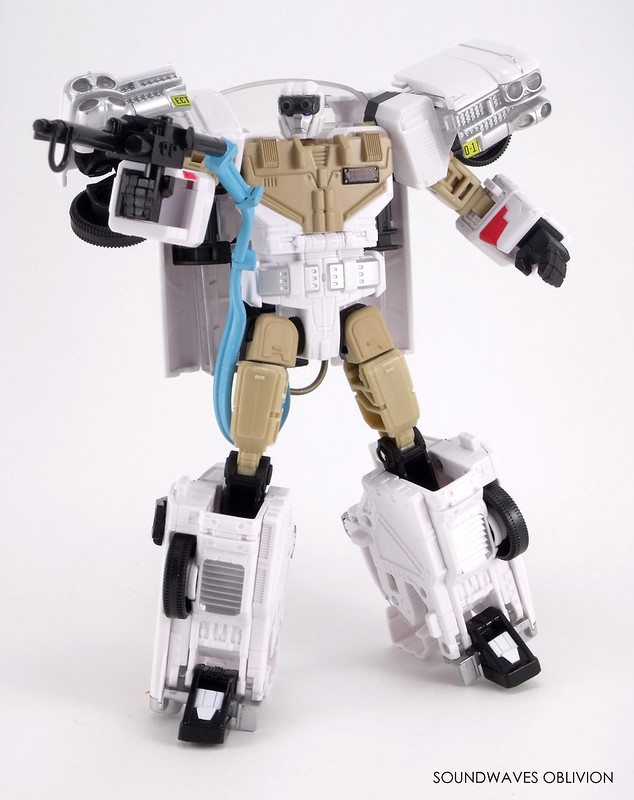 Overall this is an excellent figure, the robot mode is okay but the big selling point is that this is the Ectomobile in a G1 styled box. 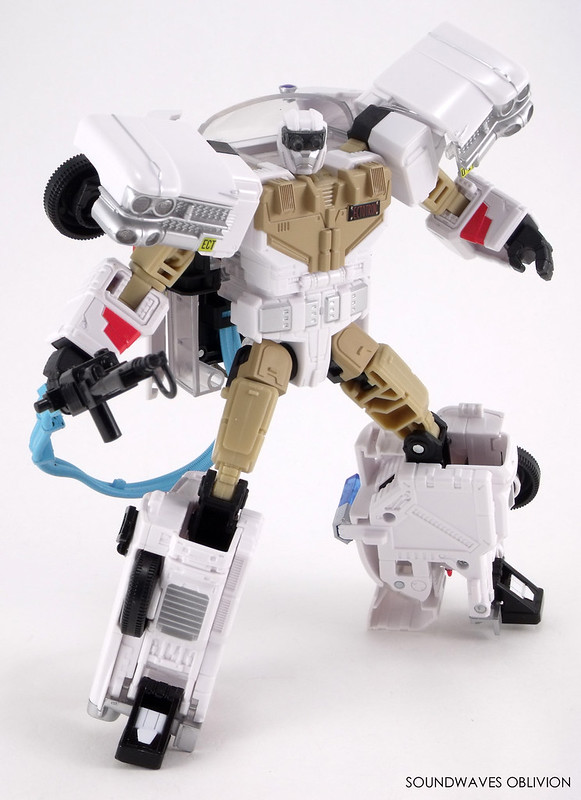 View the full gallery here.
Posted by Jeremy Barlow at 08:32