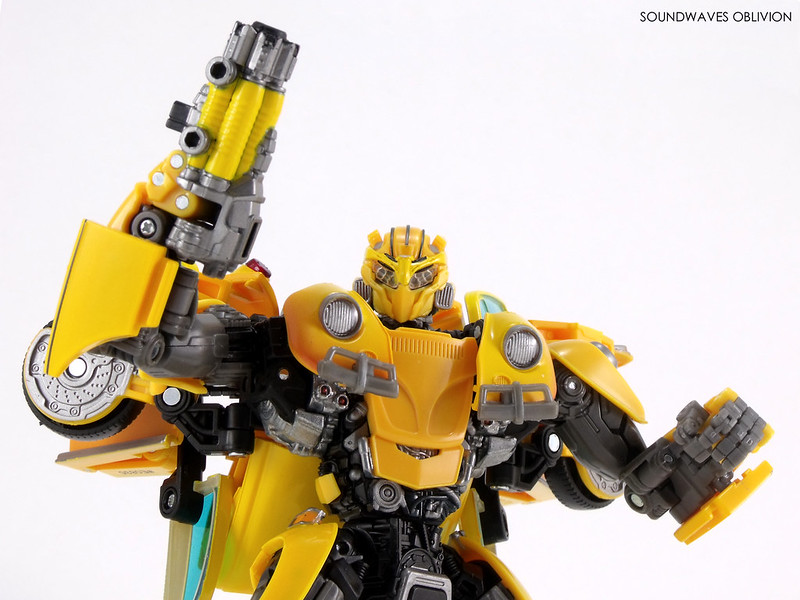 Released in October 2018, this figure is based on the version of Bumblebee as seen in the 2018 film (released December 2018). As this figure was released before the movie came out, the robot mode seems to be based on an earlier concept design of Bumblebee than the one seen in the film which is mostly obvious with the prominent door "wings". 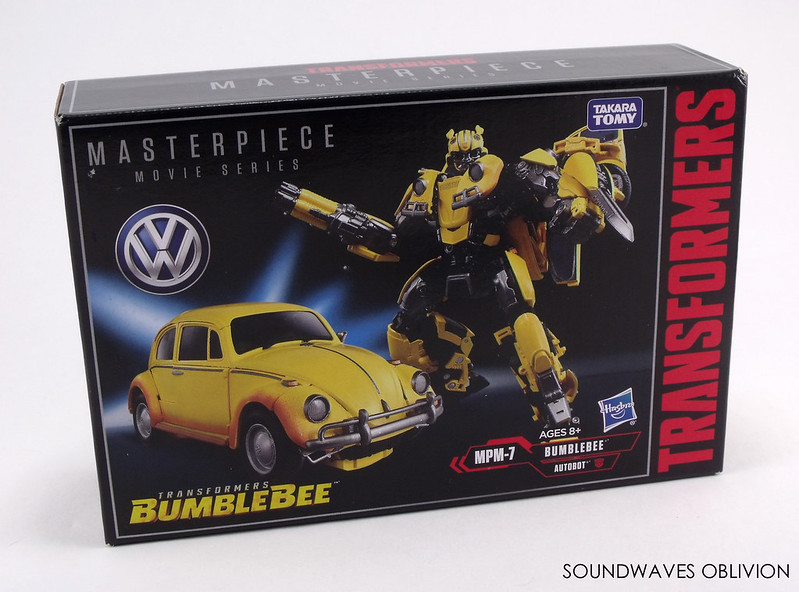 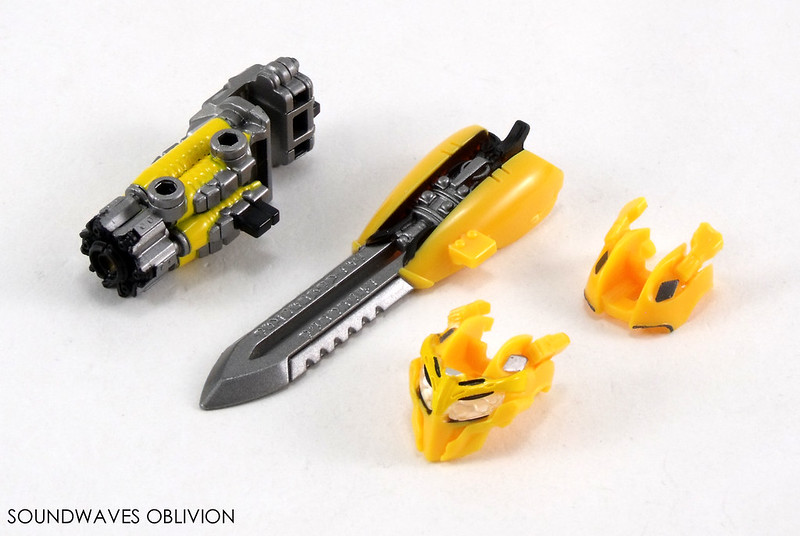 Bumblebee is packaged in robot mode and comes with an additional three accessories, a gun, sword and battle mask which can be combined in a fashion and plugged into the rear of the vehicle mode for storage. 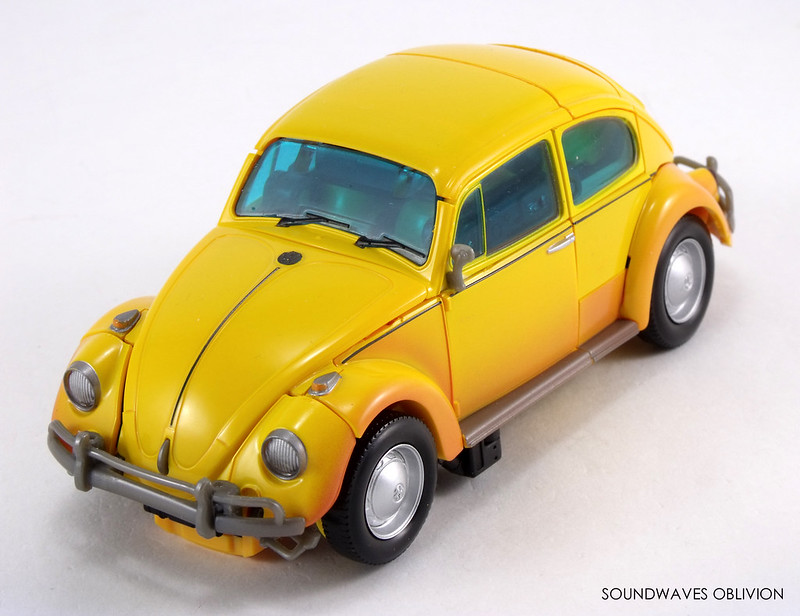 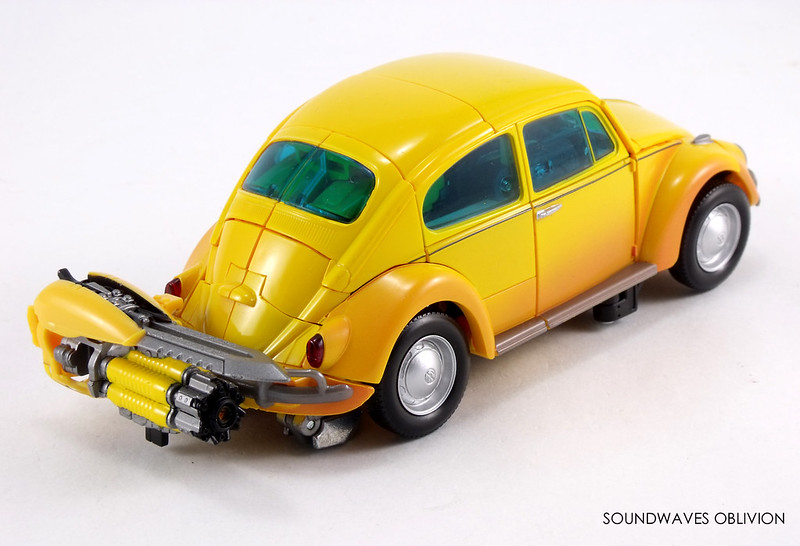 In vehicle mode, Bumblebee has returned to his original Volkswagen Type 1 / VW Beetle. This specific model is based on the 1967 VW Beetle; the G1 MP-21 Bumble version was based on the 1972 1302 VW Beetle. Seeing that this is a Masterpiece figure it is slightly disappointing that the front and rear bumpers are not chromed or a painted silver and are a dull grey plastic instead. The VW Beetle features a two tone colour scheme rather than being a straight yellow colour. The lower half of the car is an orange colour which blends into the yellow colour, however one panel near the rear wheels is just orange and the panel above is yellow so the effect is quite jarring here. Instead of being clear, the windows are tinted blue which is possibly to hide the internal jumble of parts. 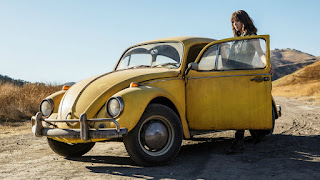 Overall the vehicle mode fits together quite well and rolls easy enough with the wheels despite the low hanging robot parts beneath the vehicle. 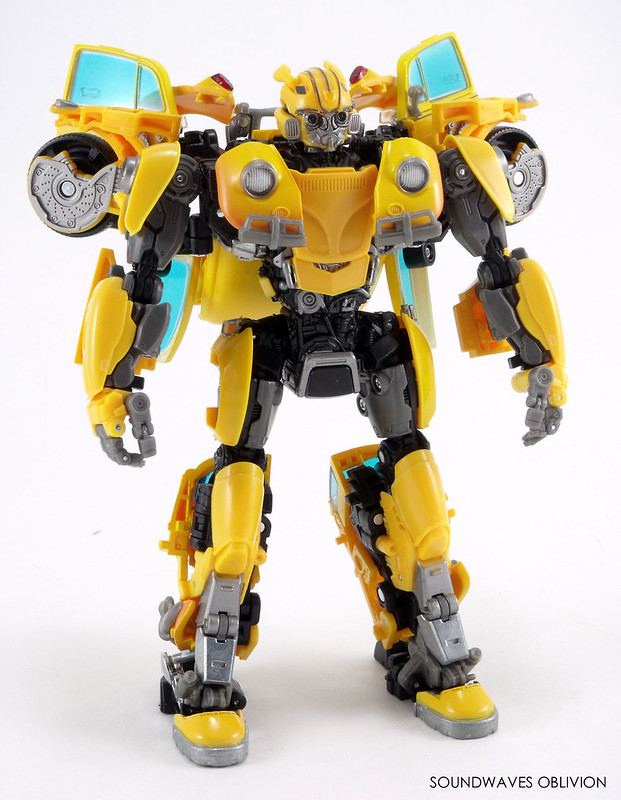 Like the other Movie Masterpiece figures, Transformation is fiddly and the instructions are of no use so it would probably be ideal to watch the video reviews which focus on the transformation steps. The robot mode is the highlight and not being entirely screen accurate is a minor quibble. Despite the complicated transformation, compared with the Studio Series version, this figure is on another level. 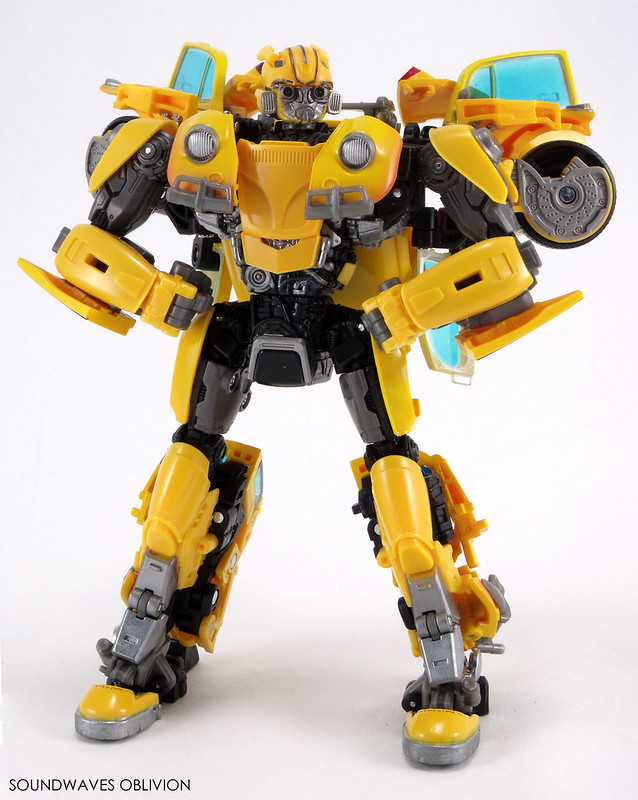 Bumlebee also features diecast metal chest missiles which are exposed when the chest halves are raised. These are not shown in the movie but are similar to MP-3 Starscream (and all other Seeker moulds). 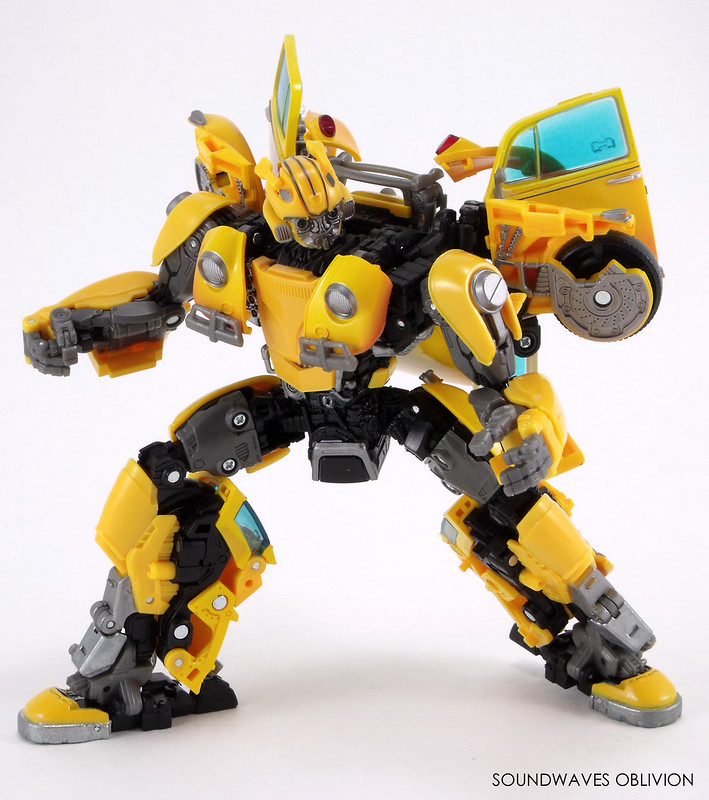 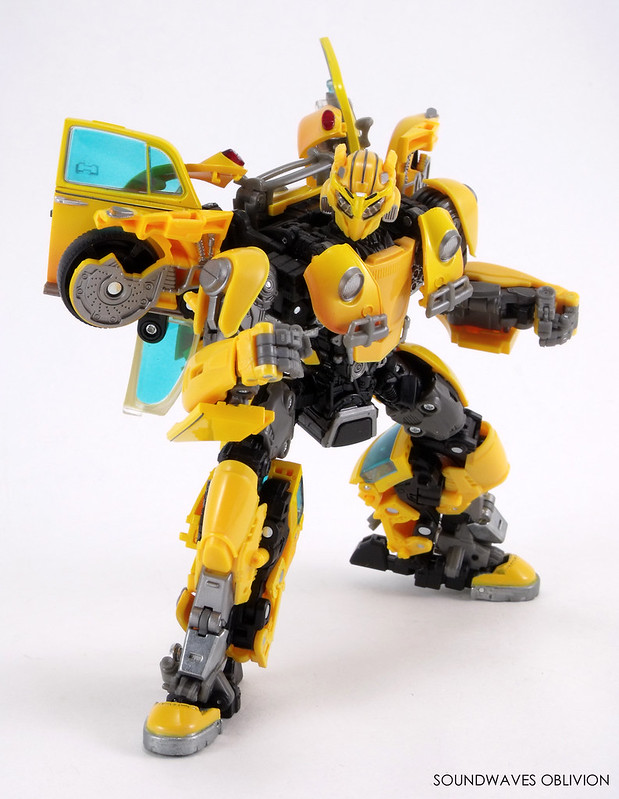 Though shorter than MPM-3 Bumblebee in robot mode both share similar design features and like the car mode the additional accessories can store on the robot modes back. The gun can attach to Bumblebees right hand and the sword can attach to either forearm. Unlike MPM-3 with an integrated battle mask, with MPM-7 the face has to be swapped out. The mask itself is quite detailed with honeycomb styled eyes and the actual face is similar in style to the original G1 Bumblebee face. 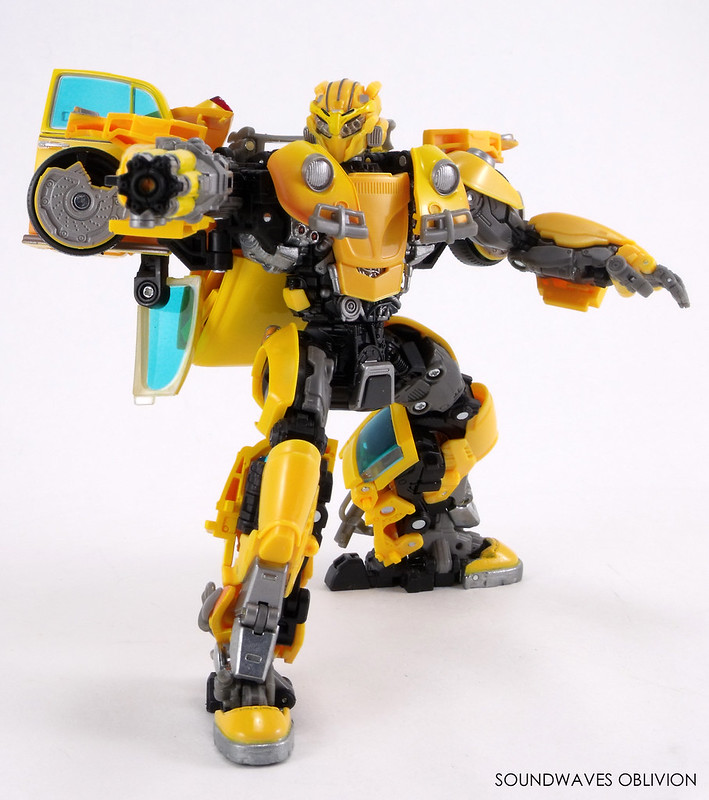 Overall this figure is not as good as MPM-3 Bumblebee, the transformation is overly complex and the robot mode is not as polished as MPM-3. Additionally I feel the figure is overpriced at $89.99, though not as overpriced as the tiny MP-45 Bumble which will retail for $119.99 (more on MP-45 to come). 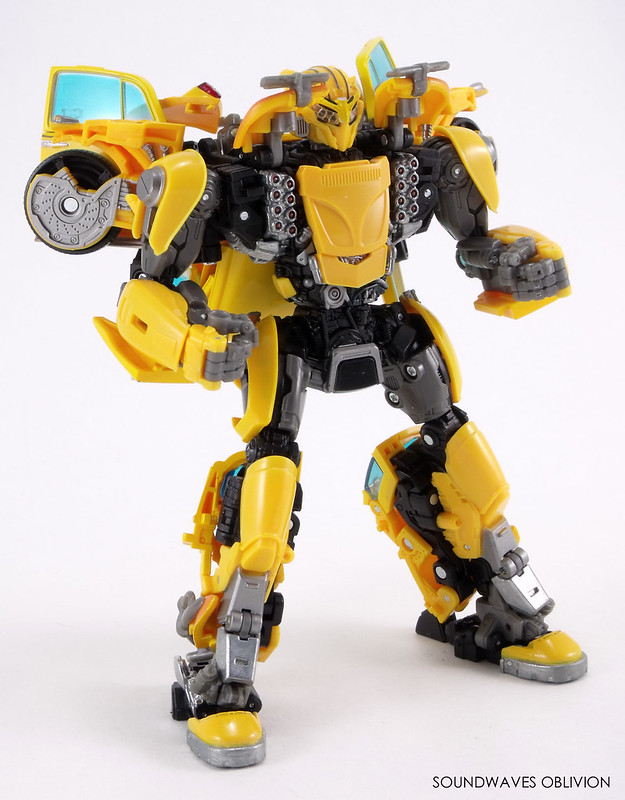 View the full gallery here.
Posted by Jeremy Barlow at 17:58