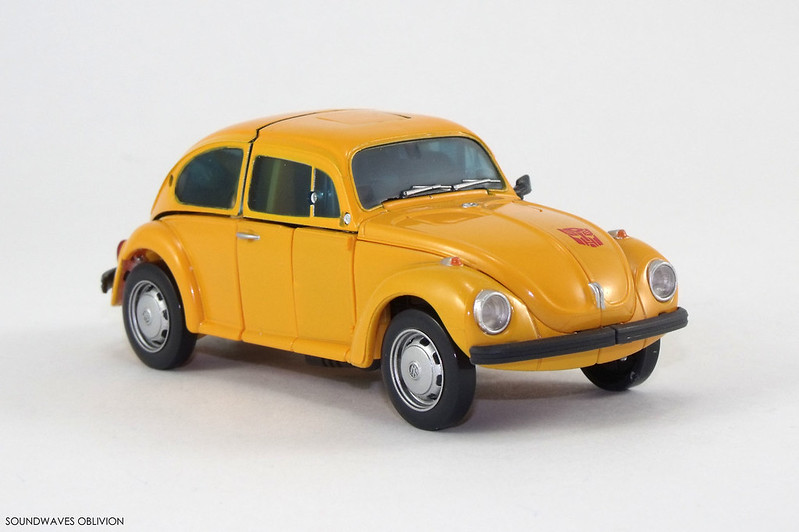 Profile (Translated from the Trading Card)
MP-21 Cybertron Intelligence Agent / Bumble
Function: Espionage
Motto: "The least likely can be the most dangerous."
Profile:
Bumble is the smallest Cybertron warrior. His size however is an advantage as he's able to infiltrate where others are reluctant to go. Has exceptional vision enabling him to detect enemy sensors in hostile territory. Bumble admires Commander Convoy and although he lacks the speed and strength he is always keen to make the effort in order to be recognised.
STR...2; INT...8; SPD...4; END...7; RNK...7; CRG...10; FBL...1; SKL...7 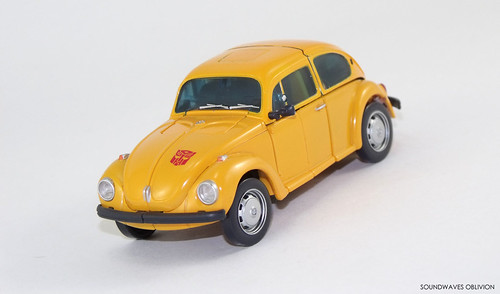 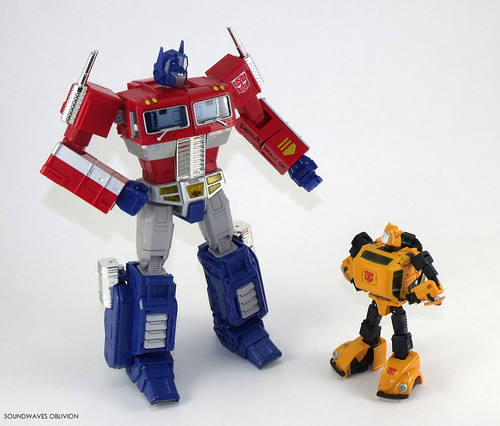 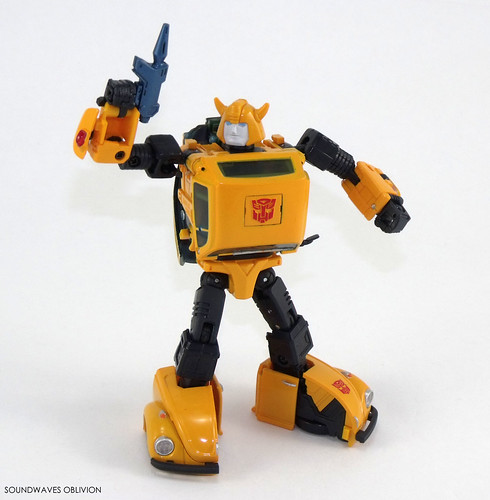 Bumblebee (or Bumble in Japan) was one of the first Autobot Minibots released in 1984 and was a prominent fixture in the original animated series.
The original Bumblebee toy was taken from Takaras 1983 Micro Change toyline was was designated the name MC-04 03 VW Bug in the sub-line "Mini Car Robo" and came in either red yellow or blue. The vehicle mode was loosely based on a "super deformed" Volkswagen Beetle Choro-Q toy. (These toys were marketed as Penny Racers outside of Japan. They had a pull back motor and a small coin could be inserted in  slot at the rear to give a wheelie effect).

After 1995 with the Generation 2 Gobot line, Bumblebee disappeared from the mainline Transformer toyline. He reappeared in 2001 as a keychain licensed through Hasbro and released by Fun4all. This was a remoulded 1984 Bumblebee with a keychain attached. (The keychain figure had a second release in 2006 under the "Heroes of Cybertron" banner).

Takara reissued the 1984 Bumblebee in 2004 in the "Minibot Team" set under the Transformers Collection Series. 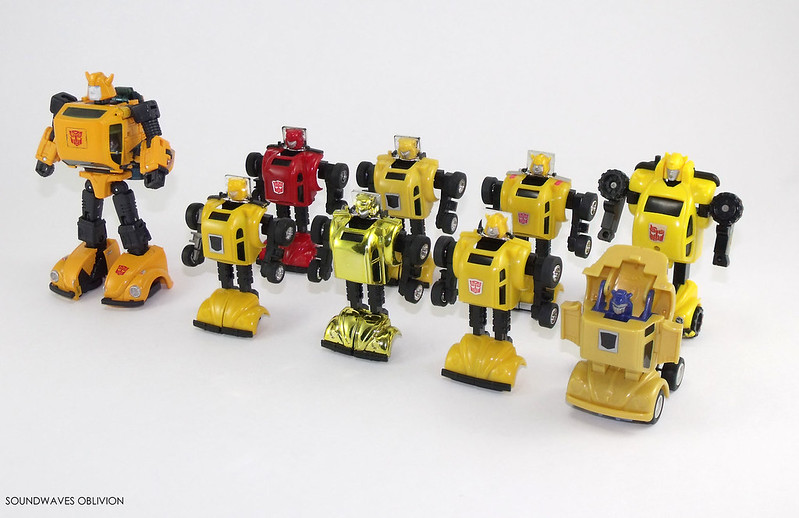 Bumblebee once again came into the mainline Transformer line in 2006 under the Transformer Classics line. This time round he was not a Beetle but a hatchback sports car; this paved the way for his appearance in the 2007 Transformers movie and Bumblebee has been in the forefront of the Transformers toy line ever since.

Moving forwards to 2014, Takara Tomy released Masterpiece MP-21 Bumblebee after finally acquiring the licence the make an accurate representation of the original Volkswagen Bumblebee. To make up for being smaller than the other Masterpiece Autobot cars, a transformable Exosuit also came with Bumblebee which is a representation of the Exosuits worn by Spike Witwicky and his son Daniel in the 1986 animated movie. In the "Transformers Masterpiece Official Guide" book, lineart depicting Bumble and the Exosuit makes mention that it is Daniel in the suit, however on the released MP-21 box it mentions that is Spike in the suit. It makes more sense being Spike for sake of continuity with the cartoon seeing that Spike was always with Bumblebee. 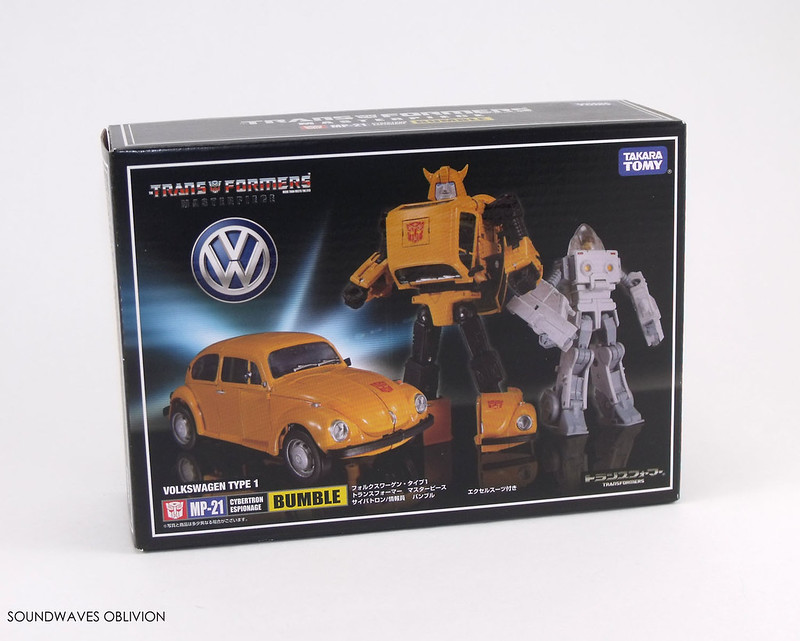 Masterpiece Bumblebee transforms into a 1972 1302 Volkswagen Type 1 (aka Volkswagen Beetle). Out of interest this is a similar model to the Volkswagen that had a cameo appearance in the 2007 film but that was a 1974 1303 "Super Beetle". When applying for the licence to make Masterpiece Bumblebee, in an interview with one of Takara's designers, Shogo Hasui, in the Transformers Masterpiece Official guide he mentions Volkswagen wanted to know the exact model, year and scale of the car. Possibly the 2007 movie had some bearing on the choice or maybe its just coincidence? 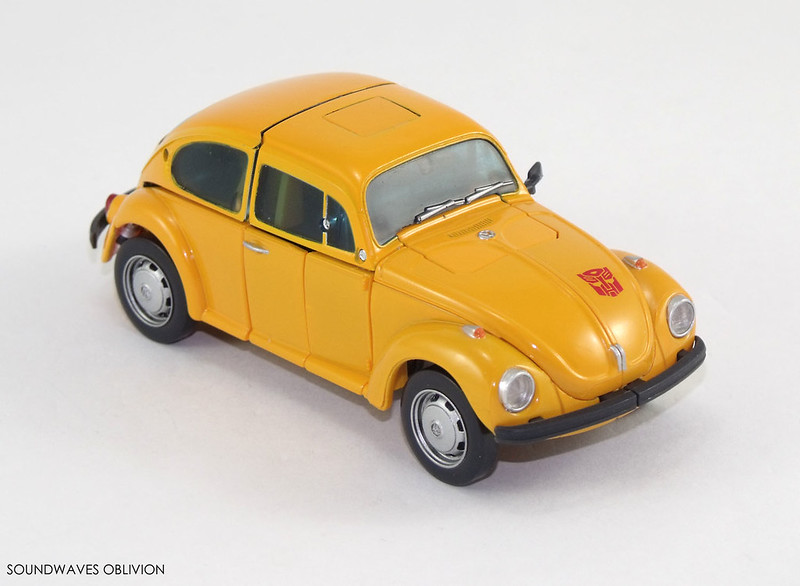 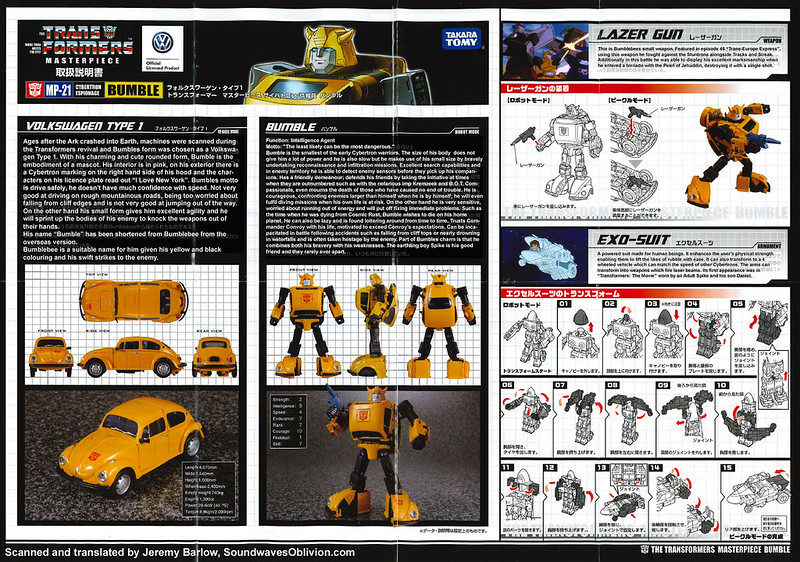 Vehicle Mode: Volkswagen Type 1 (Translated from the instruction booklet)
After the Ark had crash landed on Earth, a Volkswagen Type 1 was scanned for Bumble. With his charming and cute rounded form, Bumble is the embodiment of a mascot. He has a pink interior and on his exterior there is a Cybertron emblem on the right hand side of his hood; the characters on his licence plate read out “I Love New York”. Bumble’s motto is drive safely, he hates driving too fast. Doesn’t drive well on rough mountainous roads as is liable to fall from cliffs if he mistimes his jumps. On the other hand his small form gives him excellent agility and he will sprint up the larger bodies of his enemies and take the weapons from their hands.
His name “Bumble” has been shortened from Bumblebee from the overseas version.
Bumblebee is a suitable name for him given his yellow and black colouring and his swift strikes to the enemy. 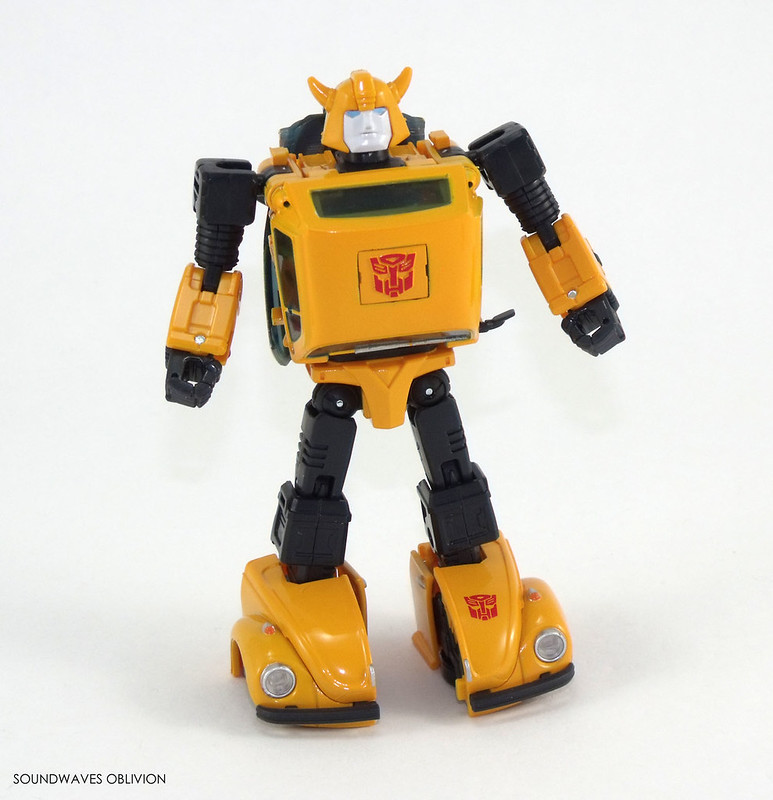 Robot Mode: Bumble (Translated from the instruction booklet)
Function: Espionage
Motto: "The least likely can be the most dangerous."
Bumble is the smallest of the early Cybertron warriors. Despite not being very strong or fast, he bravely undertakes reconnaissance and infiltration missions taking advantage of his small size. Excellent search capabilities; in enemy territory he is able to detect enemy sensors before anyone else. Friendly and gentle, he will protect his friends despite his size disadvantage. He even mourns the death of those who have caused no end of trouble such as the nefarious imp Kremzeek and BOT. He is courageous, confronting enemies larger than himself and takes action at risk to his own life. On the other hand if he has enough energy he will put off fixing immediate problems. When infected with Cosmic Rust, Bumble wishes to return to his home planet to die. Lazy from time to time with poor time keeping and often loiters around. Trusts Commander Convoy with his life, motivated to exceed Convoy’s expectations. Often taken hostage in battle following incapacitating incidents such as falling from cliffs or nearly drowning in waterfalls. Part of Bumble's charm is his bravery and human-like weaknesses. Close friends with the human Spike and they rarely apart from each other. 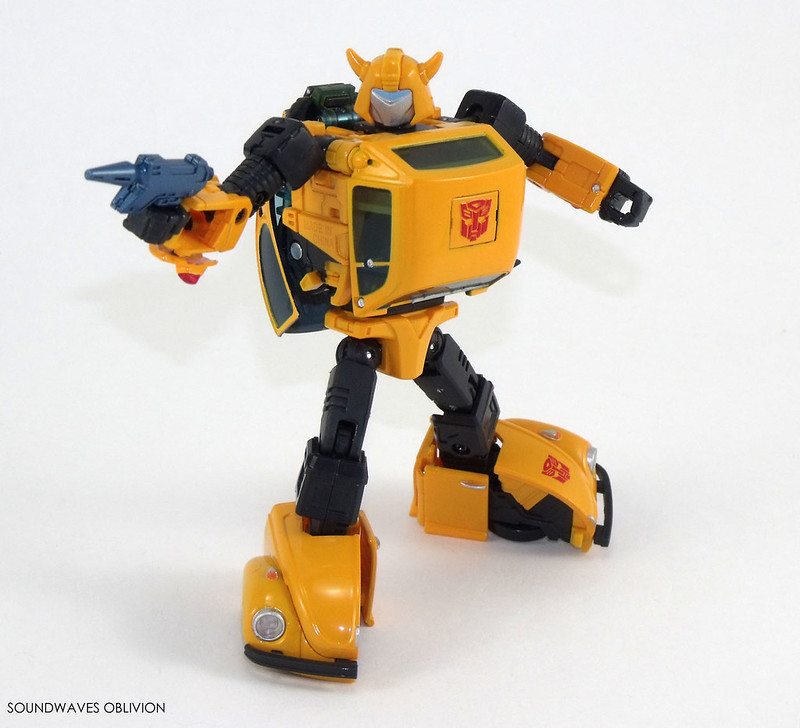 Weapon: Lazer Gun (Translated from the instruction booklet)
This is Bumblebee's small weapon. Featured in episode 46 “Trans-Europe Express”, he used this weapon to battle the Stuntrons alongside Tracks and Streak. It was in this battle he was able to display his excellent marksmanship when he entered a tornado with the Pearl of Jehuddin and destroyed it with a single shot. 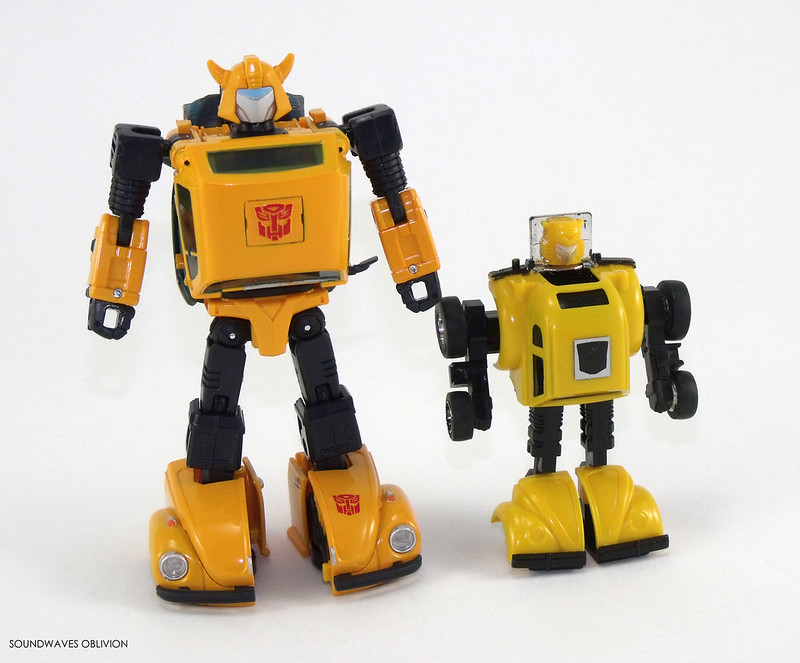 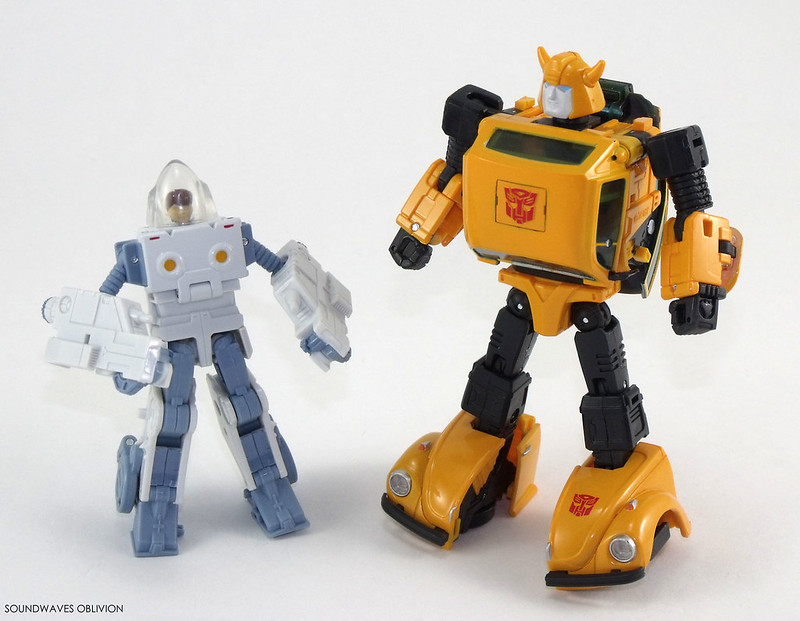 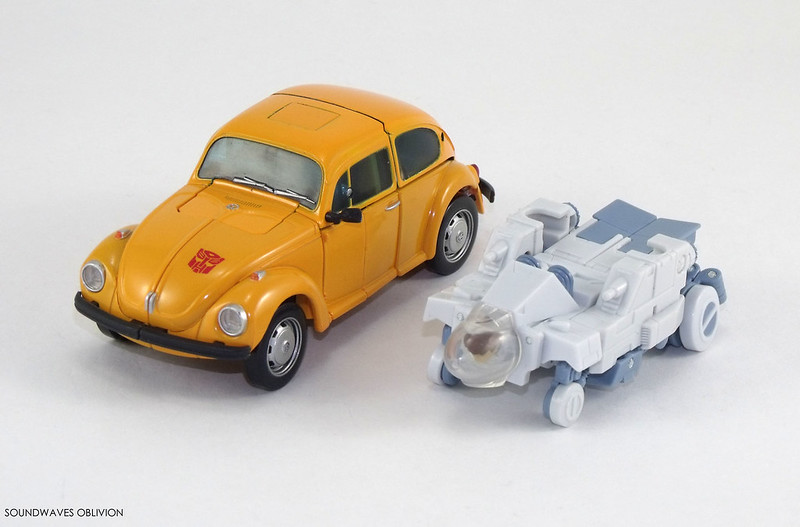 Armament: Exo-Suit (Translated from the instruction booklet)
A powered suit made for humans. It enhances the user's physical strength enabling them to lift the likes of rubble with ease. It can also transform to a 4 wheeled vehicle which can match the speed of other Cybertrons. The arms can transform into weapons which fire laser beams. Its first appearance was in “Transformers: The Movie” worn by an Adult Spike and his son Daniel. 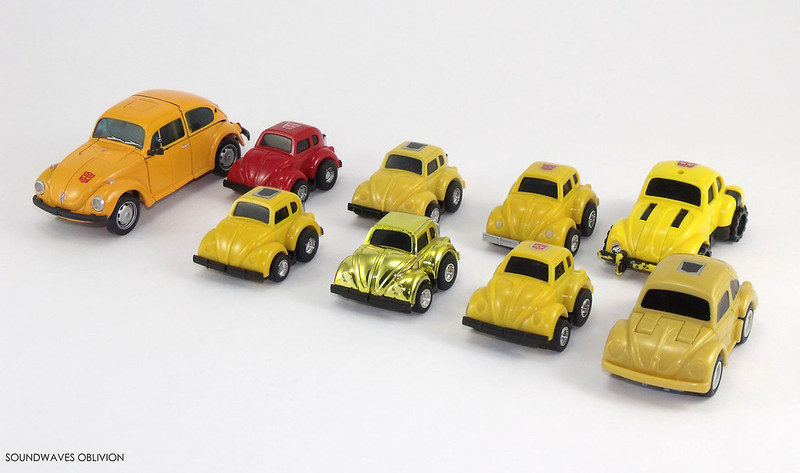