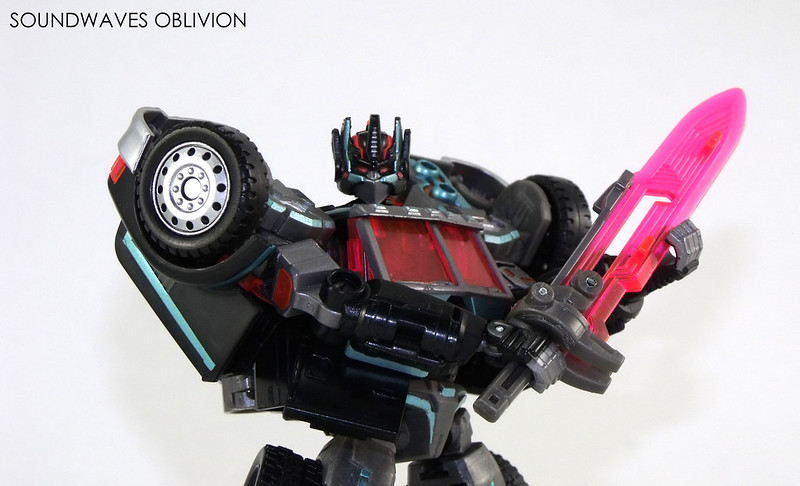 Profile (Translated from the instruction sheet)
LGEX Black Convoy
Dark Commander
Profile
Black Convoy escaped prison on Seibertron and scoured the universe to settle things with his longtime rival. When he came to Earth he scanned a new vehicular form. Burning with obsession he polishes up his Black Sword dreaming of targeting Fire Convoy with his blade, all whilst continuing his travels.
STR:10; INT: 10; SPD: 10; END: 8; RNK: 10; CRG: 10; FBL: 10; SKL: 10 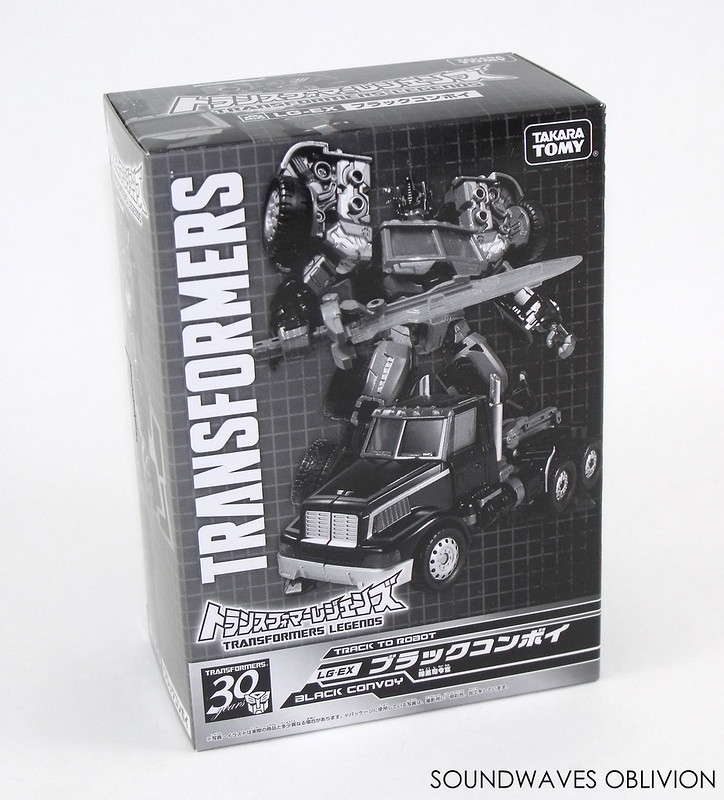 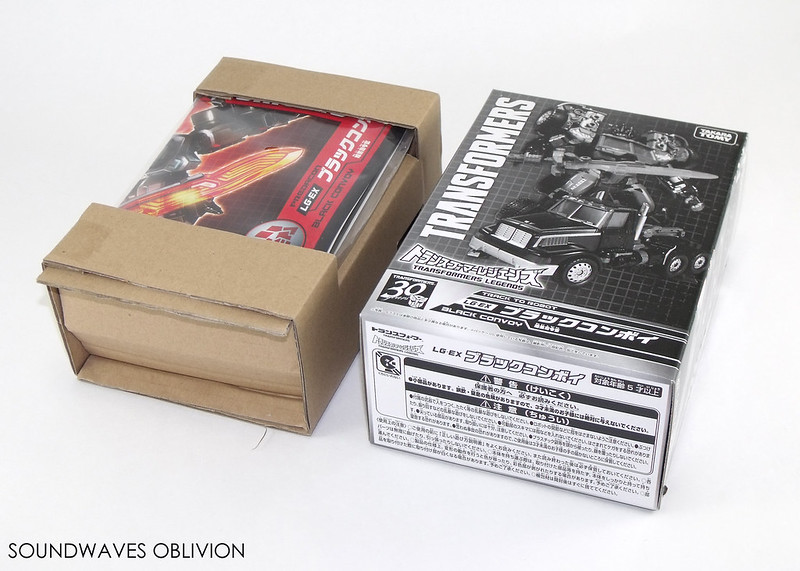 A Tokyo Toy Show exclusive in 2015 and limited to 1 per customer, Black Convoy is a black redeco of Transformers United UN-22 Laser Optimus Prime from 2011 which is a slight retool and redeco of the Transformers Reveal the Shield Optimus Prime, also released in 2011. 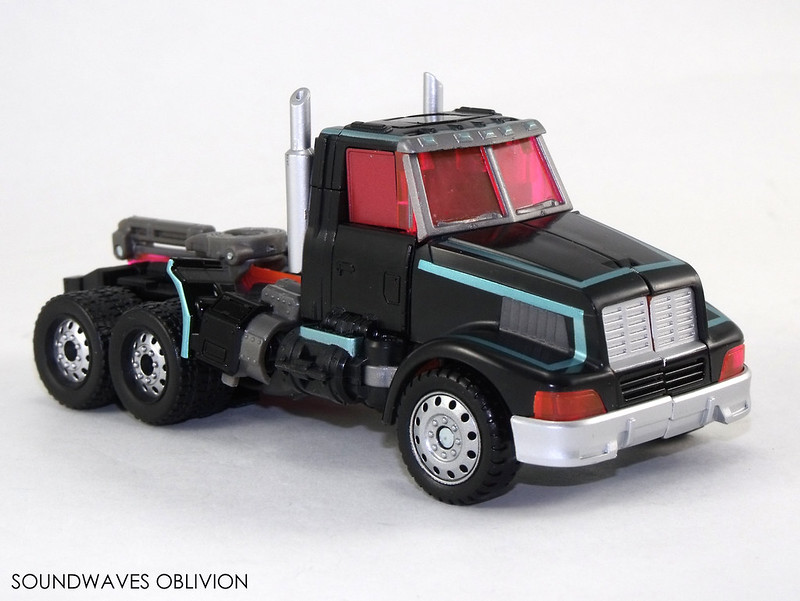 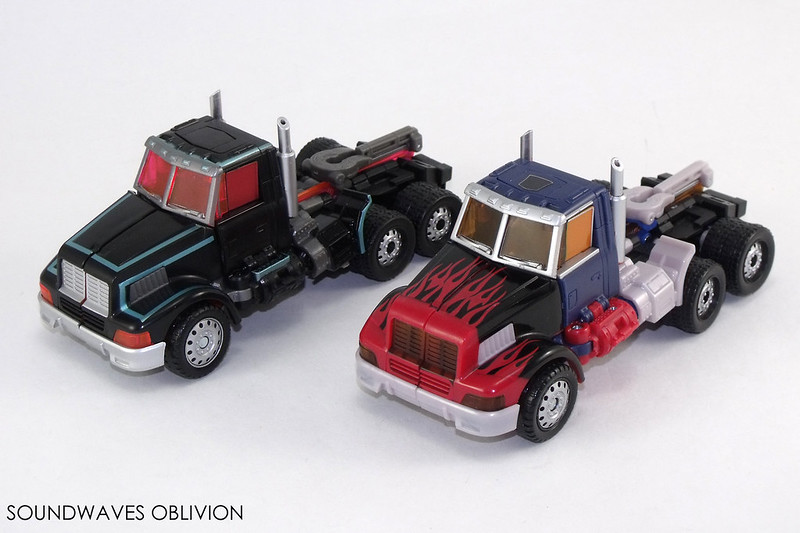 In 2013 Hasbros Transformers Collectors Club released Scourge (Black Convoy) as part of their subscription service which is very similar to Takara Tomys 2015 version but with a few minor paint differences. 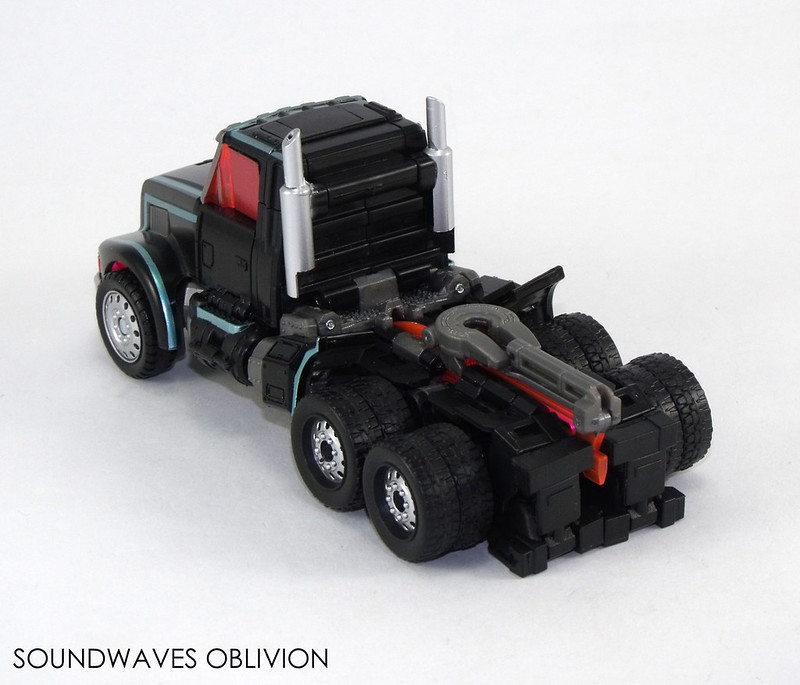 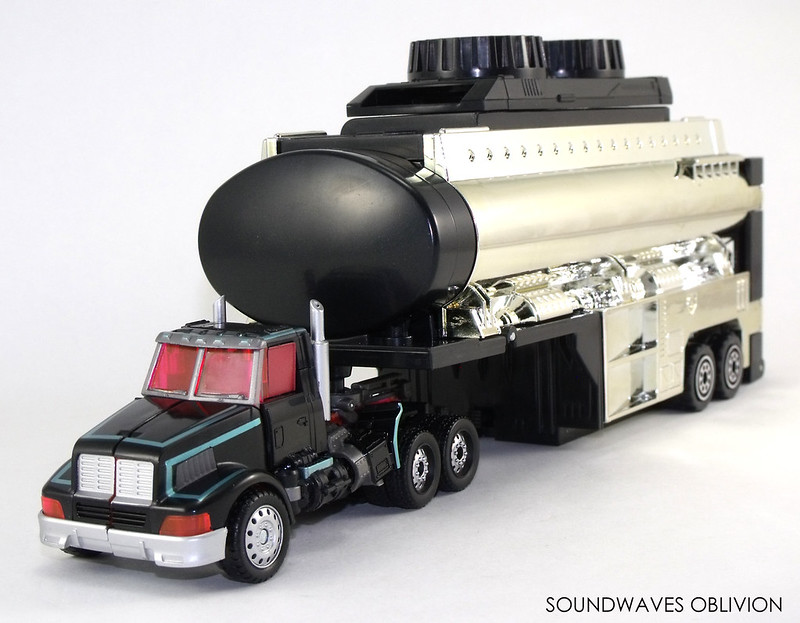 Black Convoy is based on the Car Robots from 2000, this particular figure was a repaint of Laser Optimus Prime from the Generation 2 toyline in 1995. When figures are usually updated they are improved upon but sometimes they are worse. The original Laser Optimus Prime / Black Convoy set the bar high at the time, however in my opinion this figure is not a good figure, however at the same time it isn't a bad figure. 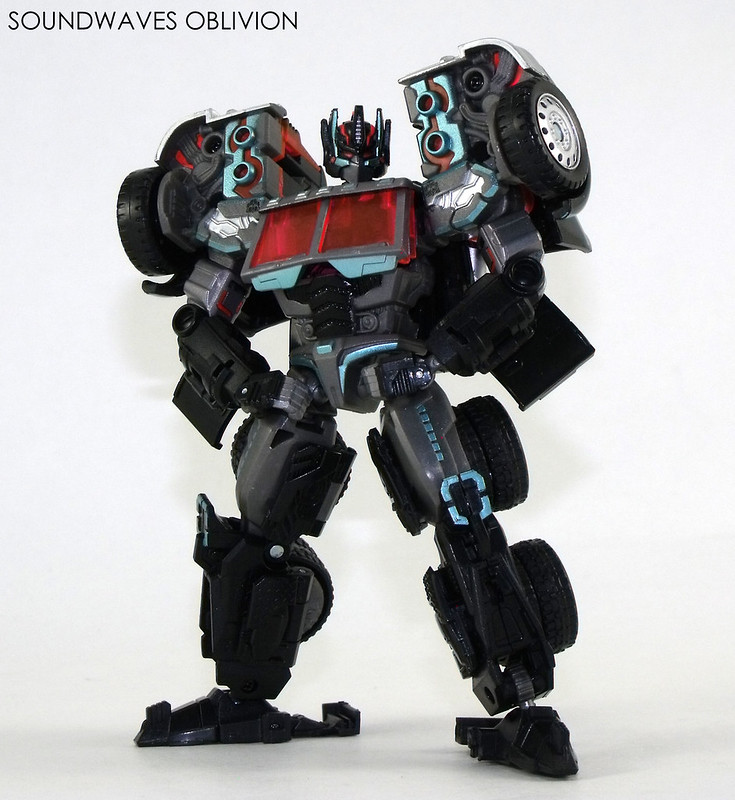 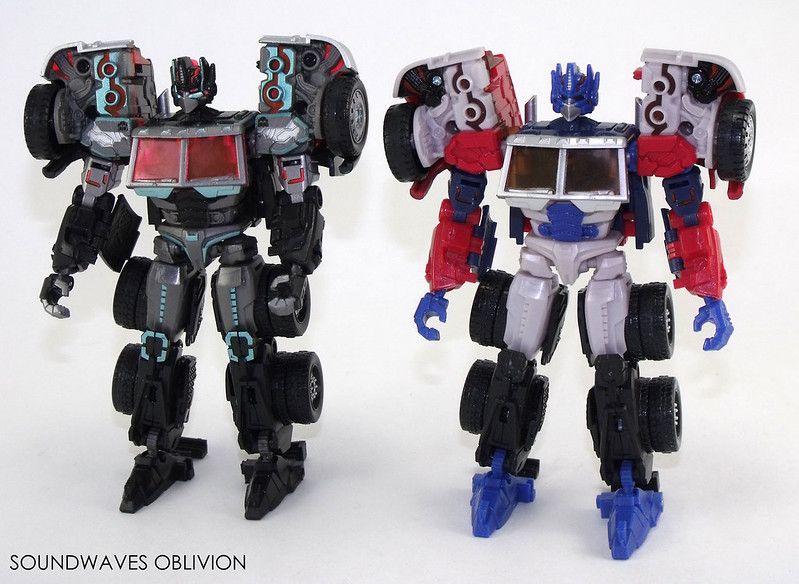 The robot mode is reasonable and has a few decent poses, more than the 1995 mould, but in vehicle mode the figure falls apart. The good thing about this mould is the trailer hitch. Black Convoys "Black Sword" transforms into the trailer hitch and the original Black Convoy trailer fits and can be towed. Another decent feature of this mould is when transformed into robot mode, the side windows of the cab fold inwards and the Matrix of Leadership is moulded on the inside of the windows. 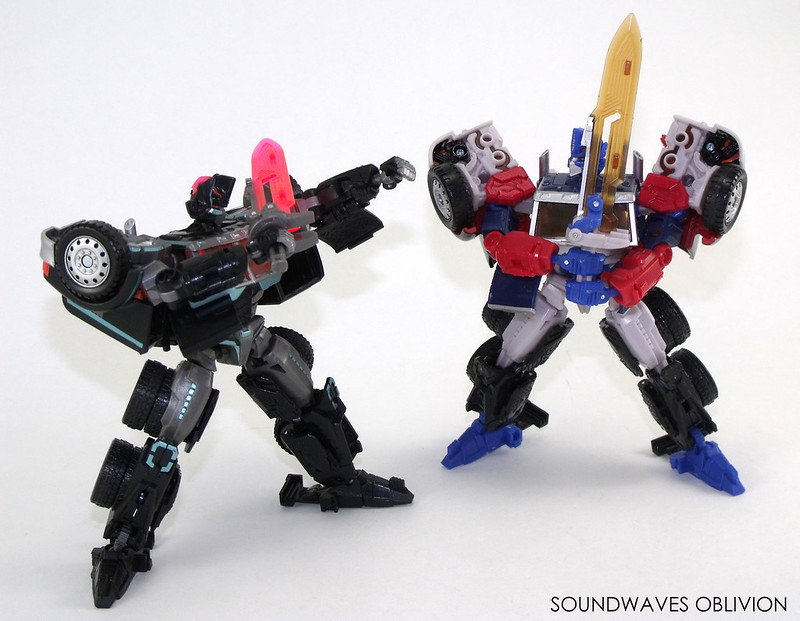 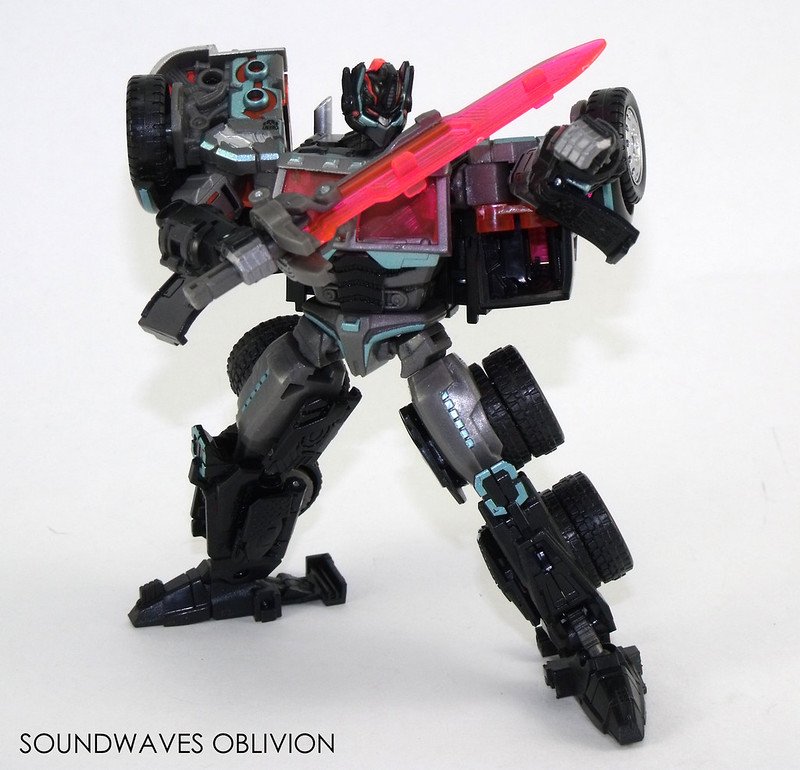 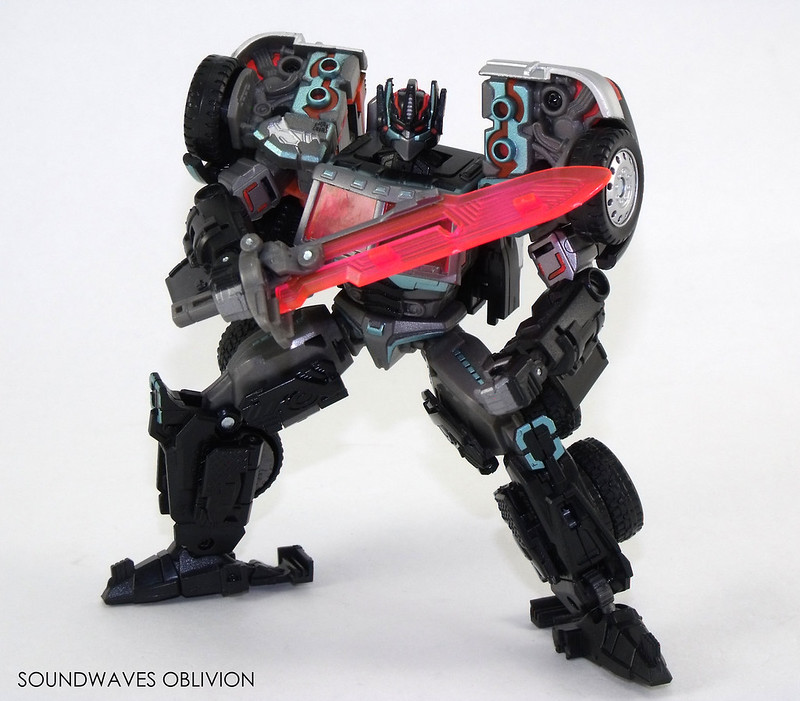