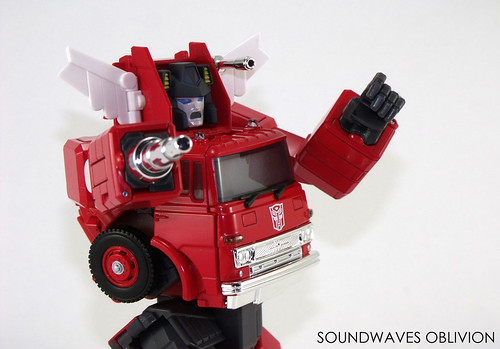 Profile (Translated from the Trading Card)
MP-33 Cybertron Search & Rescue / Inferno
Function: Search & Rescue
Motto: "Where there's smoke, there's me."
Profile:
Cybertron Search & Rescue Inferno is an excellent team member, patient and sincere, he can sense when his friends are in trouble and will rush to the scene. His love of combat increases with intensity, however he still pays attention to damages sustained to his companions and he will carry out rescue missions to ensure their safety. Together with his partner Alert, they quickly control any disaster.
STR...9; INT...6; SPD...4; END...8; RNK...5; CRG...9; FBL...6; SKL...6 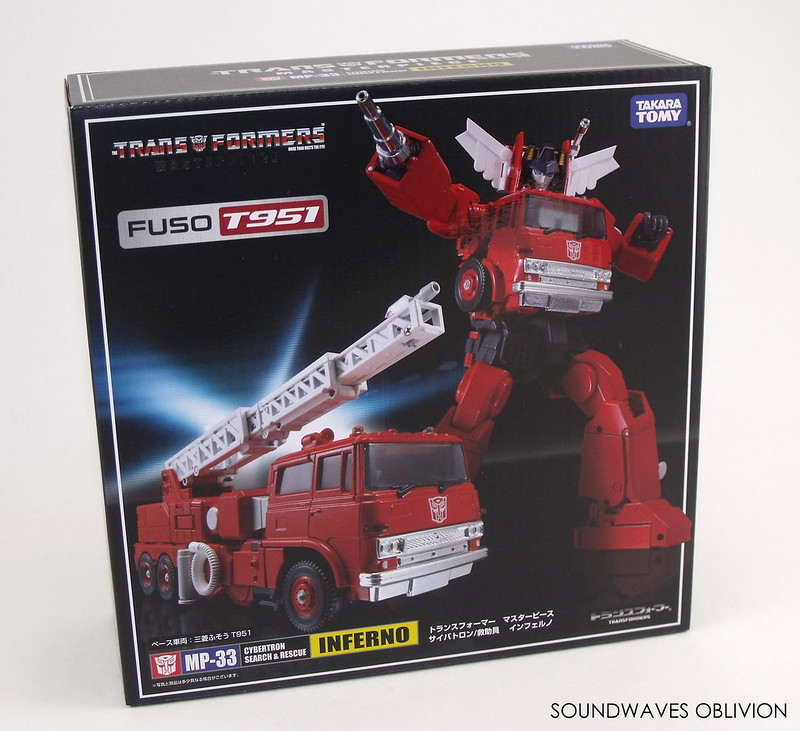 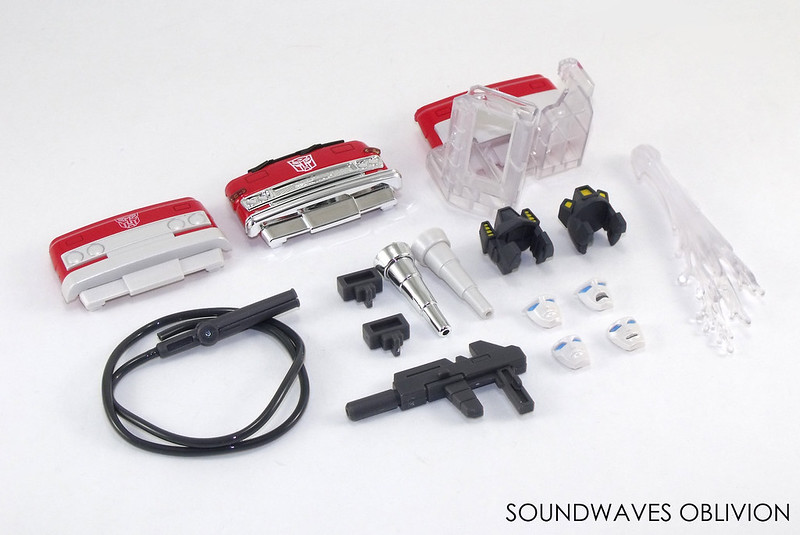 Released in November 2016, MP-33 Inferno came with several accessories including: 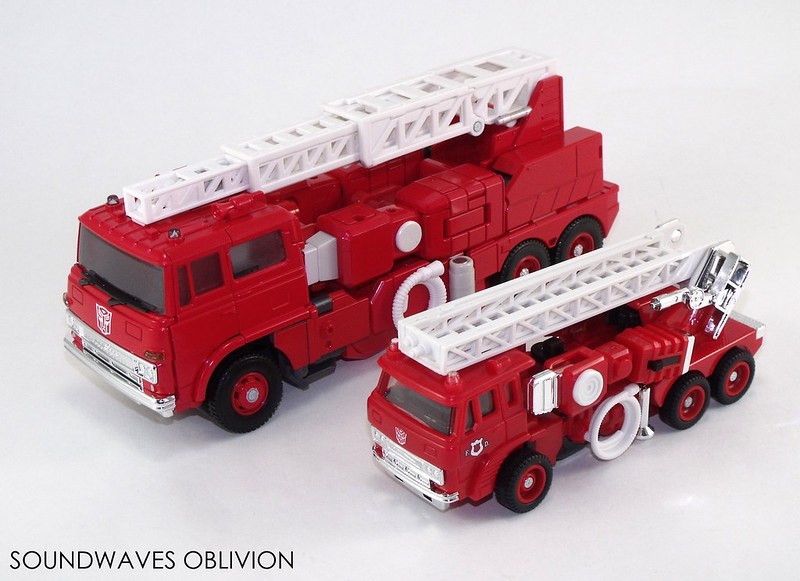 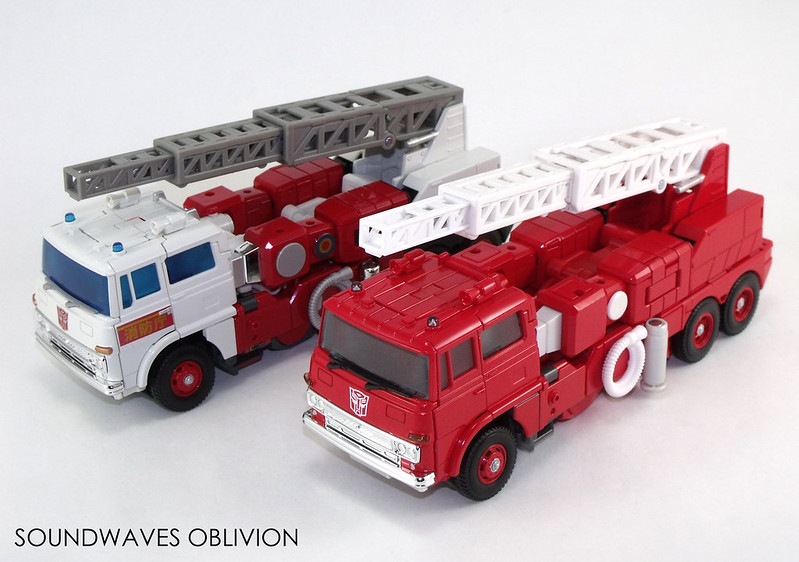 Following the direction of the current Masterpiece toy line, Inferno is heavily based on the animated version from the second series of the animated cartoon. As with the other Cybertron cars, Inferno originated from Takaras Diaclone toy line in 1983 and was brought into the the Transformers series in 1985. The vehicle mode cab is based on the Mitsubishi Fuso T951 fire engine; the rest of the vehicle is based on the simplified animation model design. 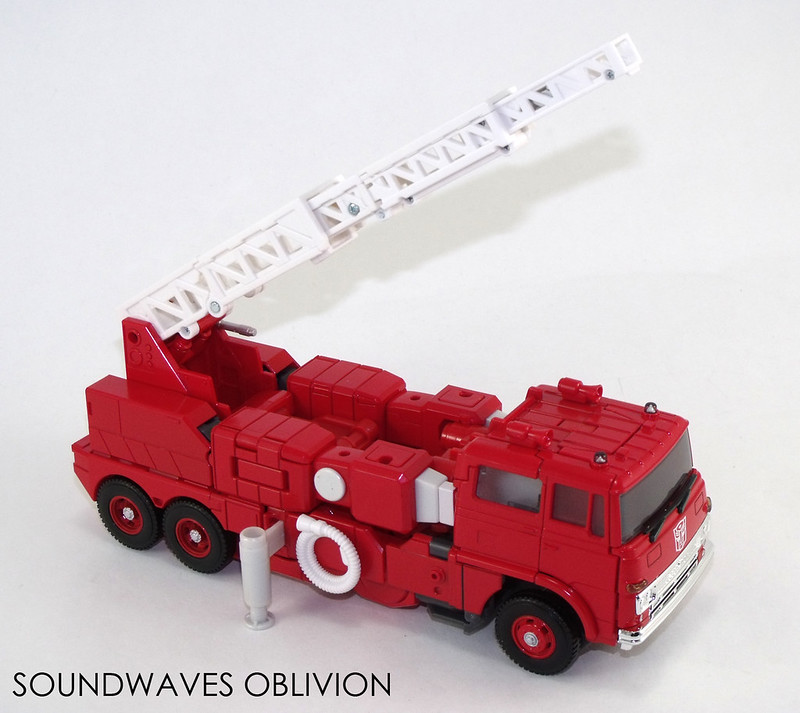 The vehicle mode is the largest of the Cybertron cars (along with MP-35 Grapple & MP-37 Artfire), although not quite as big as Convoy. Inferno features an extendable ladder which has a nozzle hidden at the front of the ladder which can be flipped out and the water spray effect can be plugged in. The extinguisher rifle can either be plugged into the top of the cab, the rear of the ladders and can be stored in vehicle mode underneath the ladder in between the robot arms. The outriggers which were previously just added detail on the original figure extend outwards and downwards to the ground. 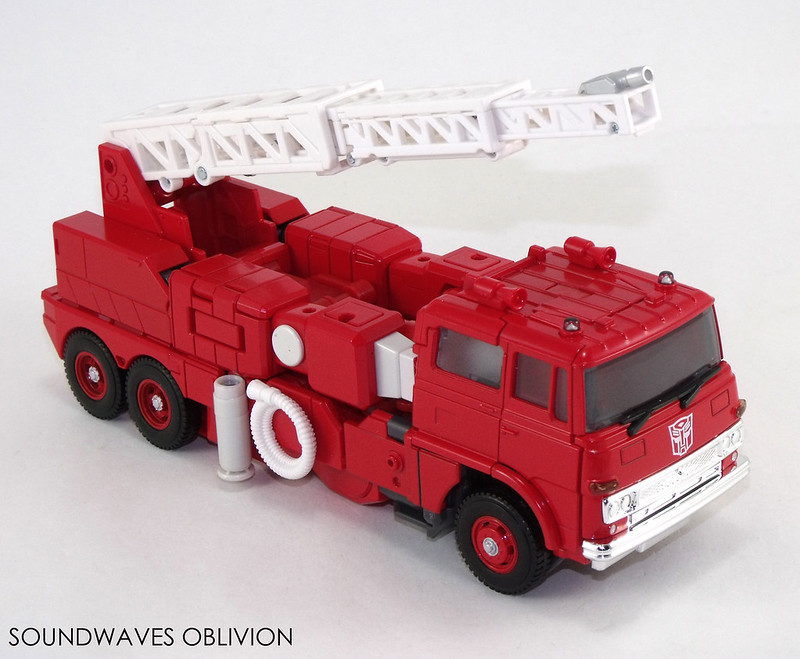 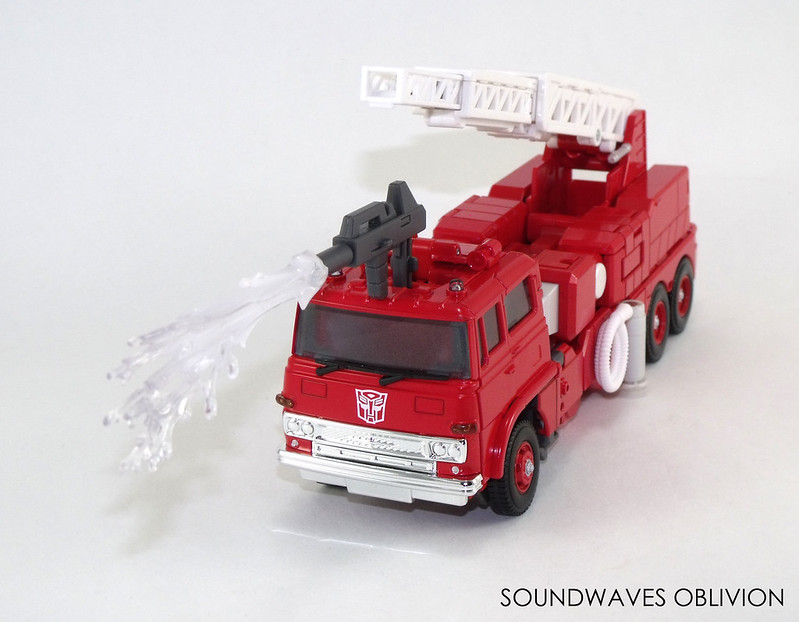 The vehicle mode also comes with a detailed chromed grill already attached, this can be removed although it is tough to do so without thinking you'll break it. The animated grill can then be put in place for the simplified animated look. 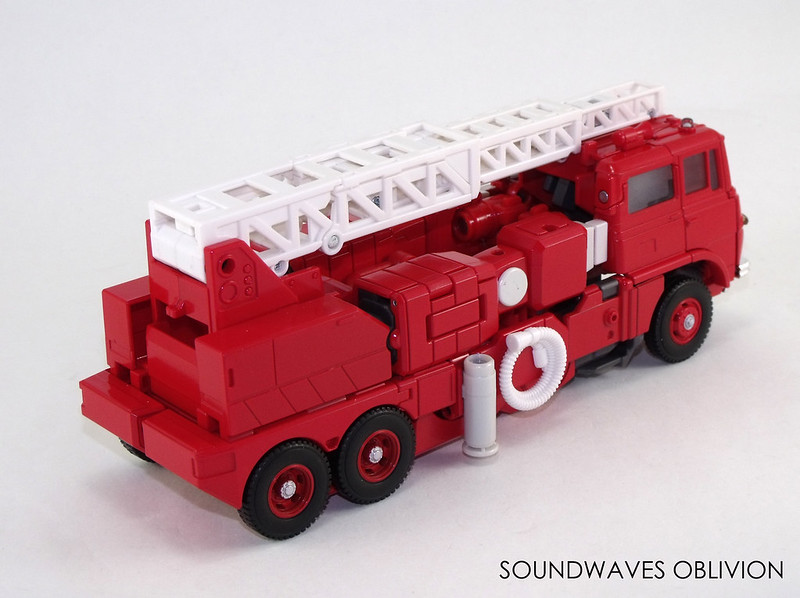 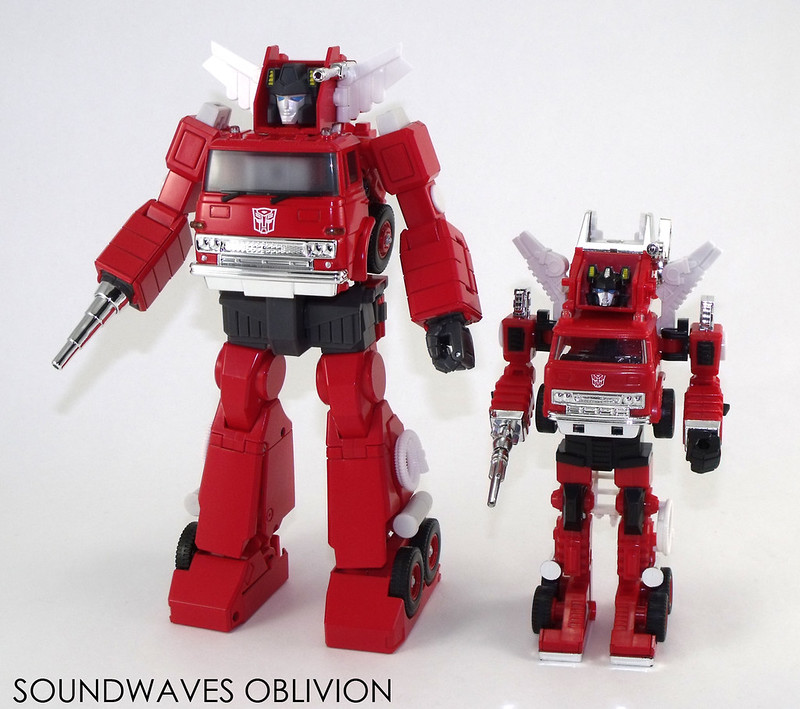 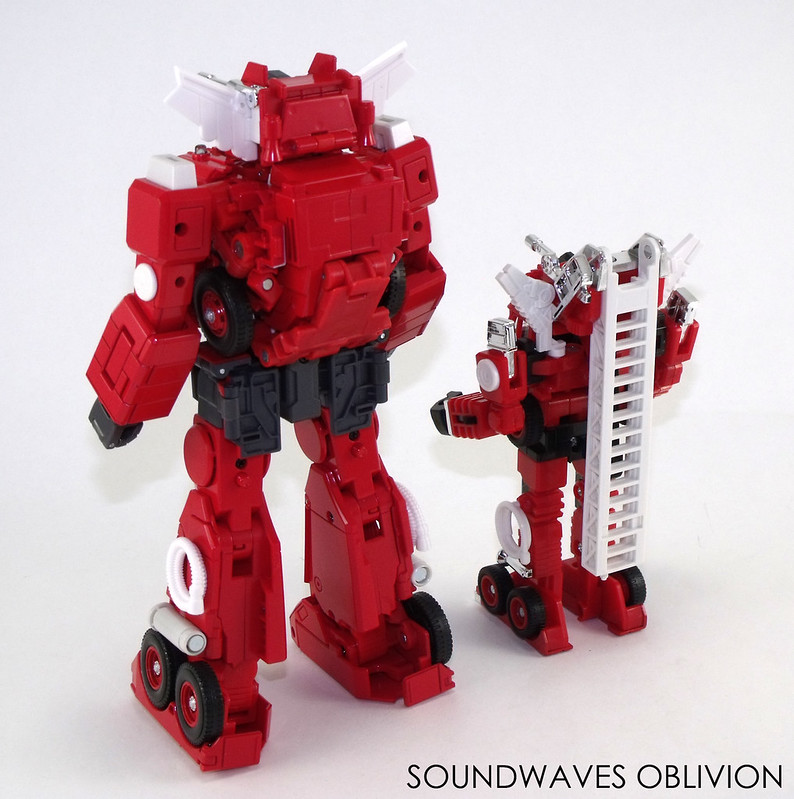 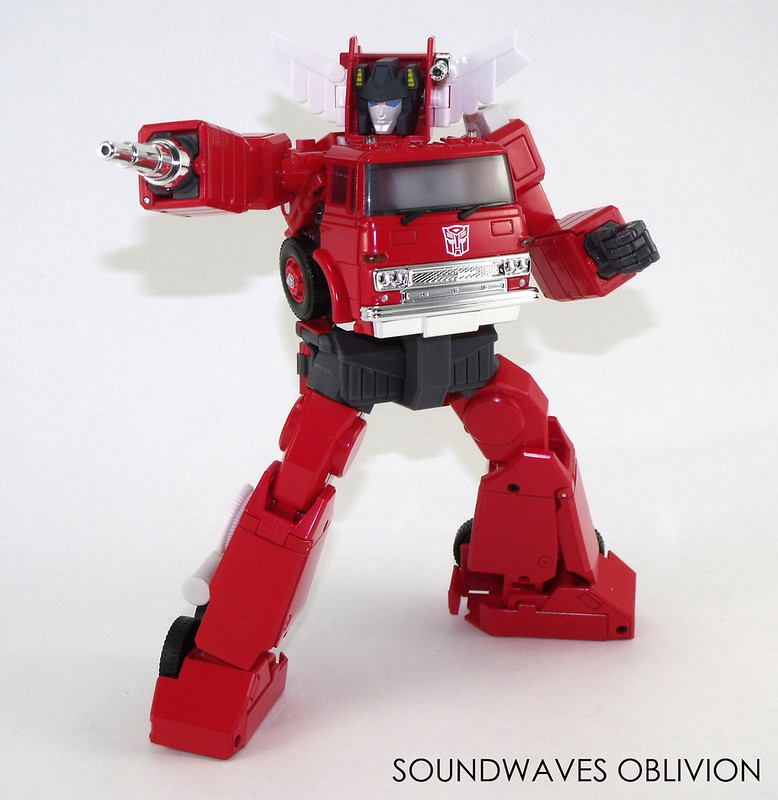 In robot mode Inferno (with MP-35  & MP-37) is the joint tallest of the Cybertron cars (not including Convoy) but is very close to Ironhide, which just shows how compact Ironhide's vehicle mode is. Inferno comes fitted with the G1 toy styled head which comes with two expressions, neutral and screaming; the animation styled head also has to faces, neutral and smiling. Both head styles were seen in the G1 cartoon depending on who the animation studio was. 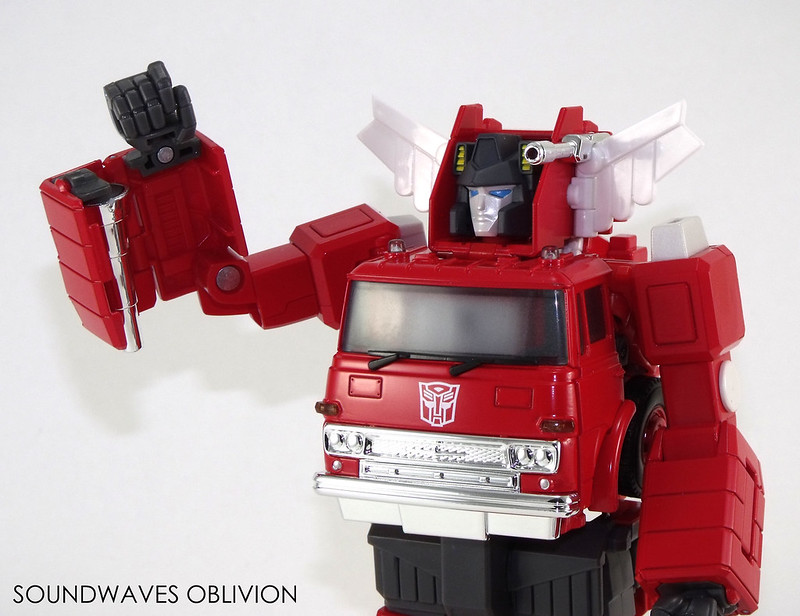 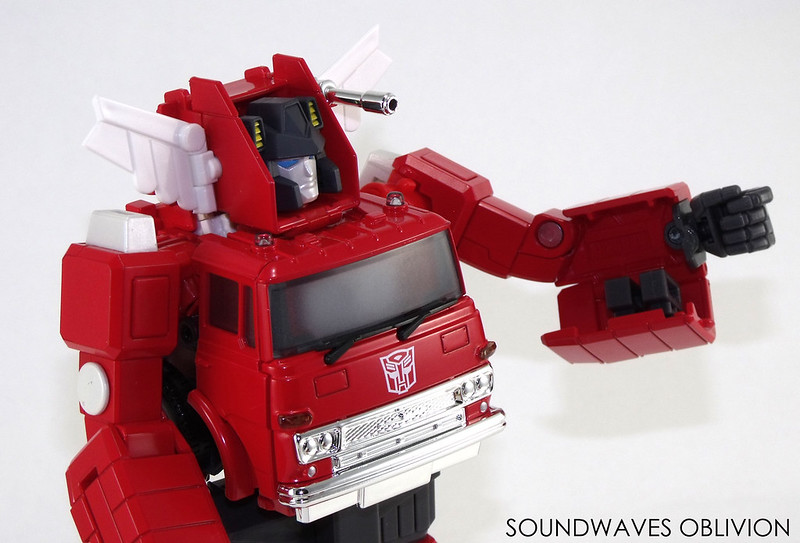 Infernos right forearm opens out where you cab rotate the hand into the forearm and fold out the chromed muzzle. The chromed muzzle can be removed and the animated styled muzzle can be fitted. Inferno's left forearm stores the two communication devices which appeared in the cartoon episode "The Target is Convoy" / " Prime Target". In this episode Inferno gets trapped by a robotic hose so calls for help on his wrist communicator, this is snapped off by the hose so other communicator appears which also gets snapped off. 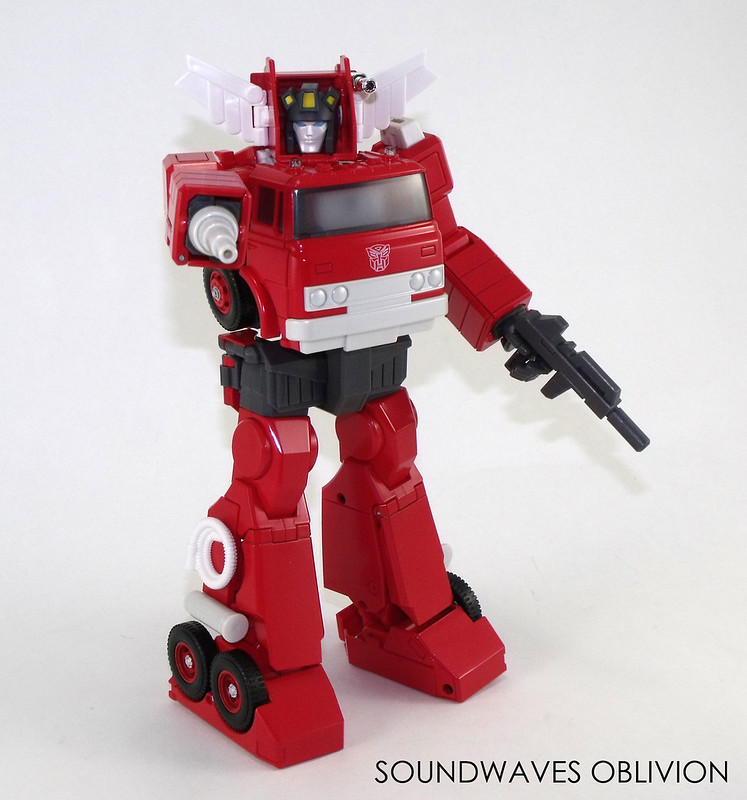 The third grill Inferno comes with is in the animated style and features a clear plastic holder meant for MP-14 Alert which can be used to replicate the final scene from the episode "Capture the Negavator" / "Auto Berserk". 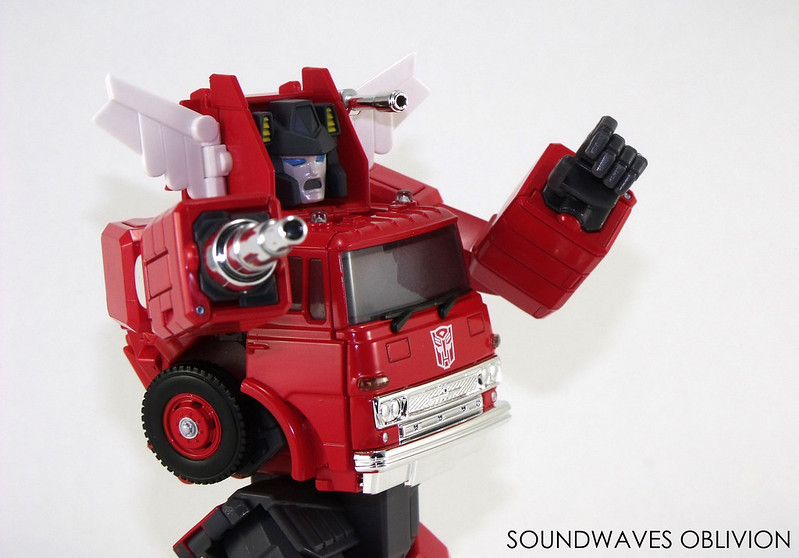 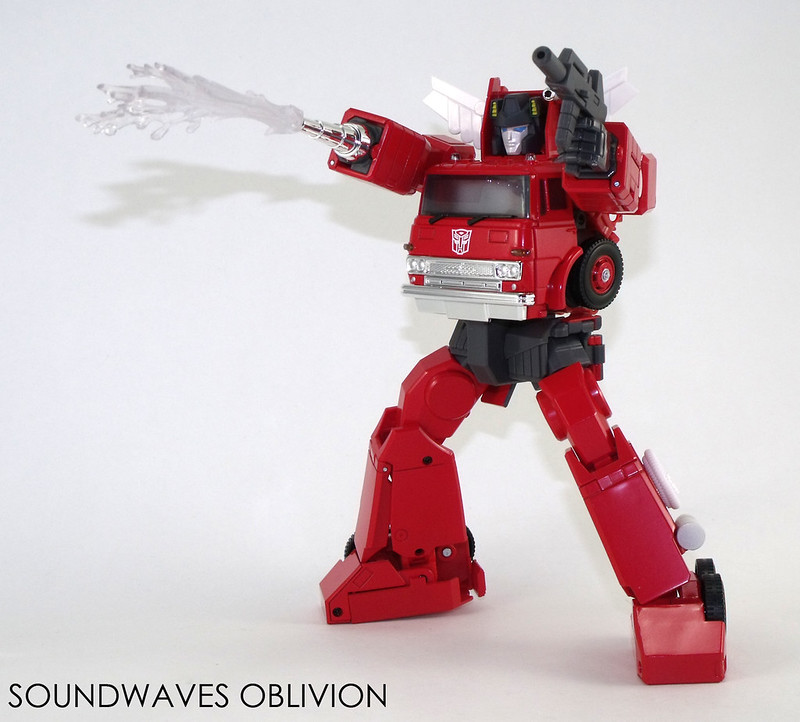 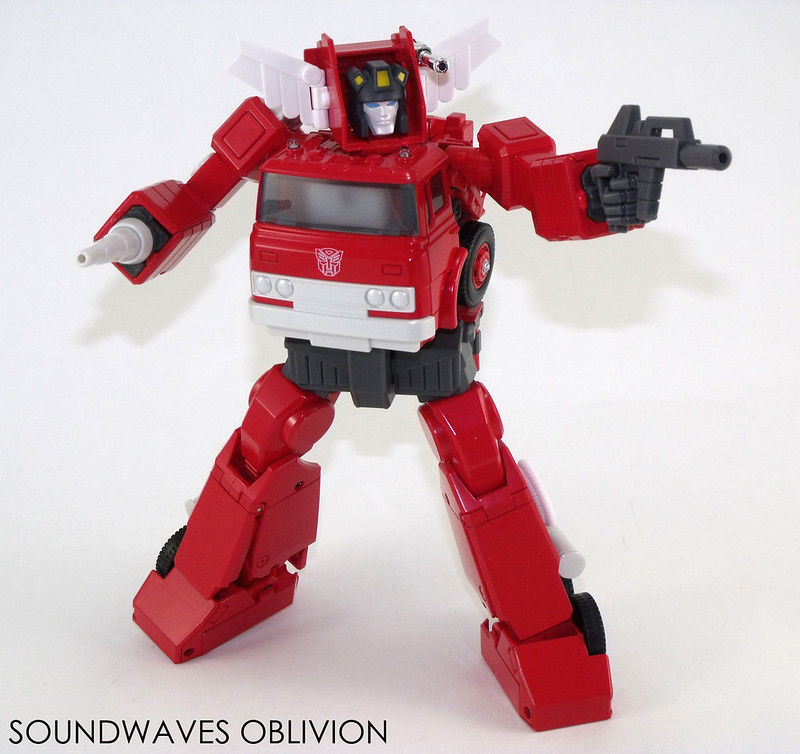 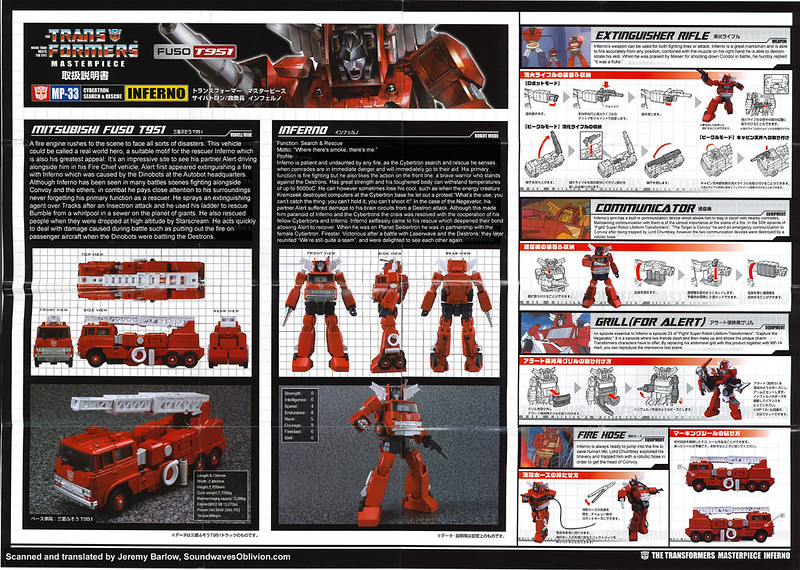 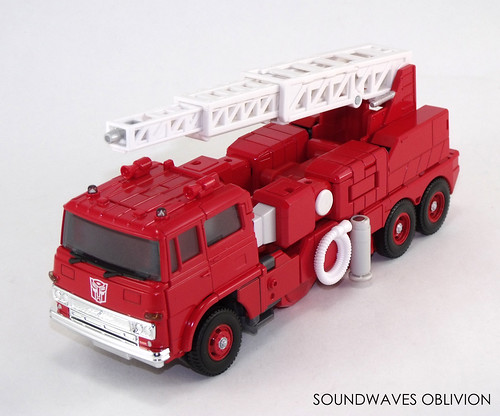 Vehicle Mode: Mitsubishi Fuso T951 (Translated from the instruction pamphlet)A fire engine rushes to the scene to face all sorts of disasters. This vehicle could be called a real world hero, a suitable motif for the rescuer Inferno which is also his greatest appeal. It’s an impressive site to see his partner Alert driving alongside him in his Fire Chief vehicle; Alert first appeared extinguishing a fire with Inferno which was caused by the Dinobots at the Autobot headquarters1. Although Inferno has been seen in many battles scenes fighting alongside Convoy and the others, in combat he pays close attention to his surroundings never forgetting his primary function as a rescuer. He sprays an extinguishing agent over Tracks after an Insectron attack2 and he used his ladder to rescue Bumble from a whirlpool in a sewer on the planet of giants3. He also rescued people when they were dropped at high altitude by Starscream4. He acts quickly to deal with damage caused during battle such as putting out the fire on passenger aircraft when the Dinobots were battling the Destrons5.NOTES: 1 "Dinobot Showdown! Part 1" / "Dinobot Island Part 1"; 2 "Insectron Syndrome" / "The Insecticon Syndrome"; 3 & 4 "Children Play" / "Child's Play"; 5 "Desertion of the Dinobots Part 1" 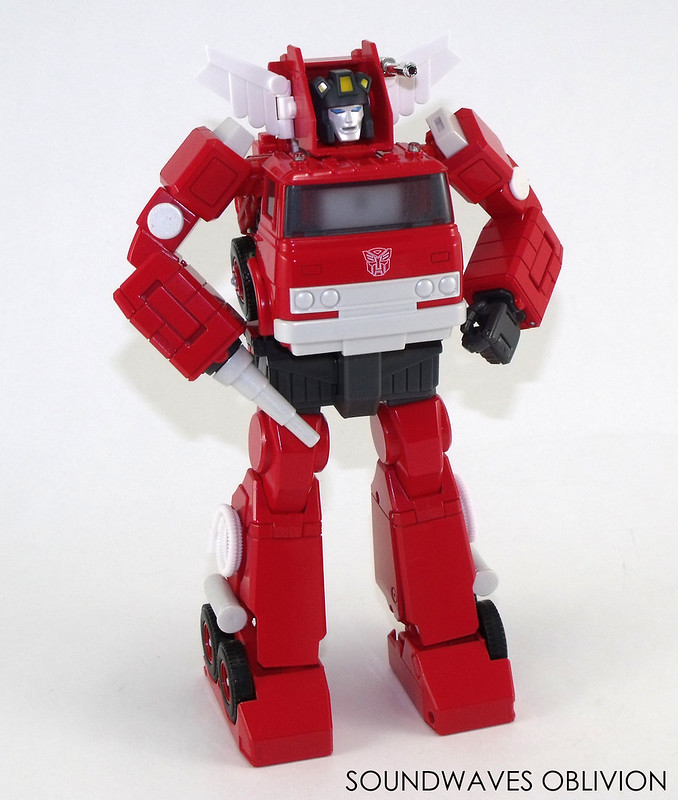 Robot Mode: Inferno (Translated from the instruction pamphlet)Function: Search & RescueMotto: "Where there's smoke, there's me."Profile:Inferno is patient and undaunted by any fire; as the Cybertron search and rescue he senses when comrades are in immediate danger and will immediately go to their aid. His primary function is fire fighting but he also likes the action on the front line; a brave warrior who stands against the Destrons. Has great strength and his toughened body can withstand temperatures of up to 8000oC. He can however sometimes lose his cool, such as when the energy creature Kremzeek destroyed computers at the Cybertron base he let out a protest “What’s the use, you can’t catch the thing, you can’t hold it, you can’t shoot it!”6 In the case of the Negavator, his partner Alert suffered damage to his brain circuits from a Destron attack7. Although this made him paranoid of Inferno and the Cybertrons the crisis was resolved with the cooperation of his fellow Cybertrons and Inferno. Inferno selflessly came to his rescue which deepened their bond allowing Alert to recover. When he was on Planet Seibertron he was in partnership with the female Cybertron, Firestar. Victorious after a battle with Laserwave and the Destrons; they later reunited “We’re still quite a team”, and were delighted to see each other again8.NOTES: 6 "Panic the Kremzeek" / "Kremzeek!"; 7 "Capture the Negavator" / "Auto Beserk"; 8 "Search for Alpha Trin" / "The Search for Alpha Trion" 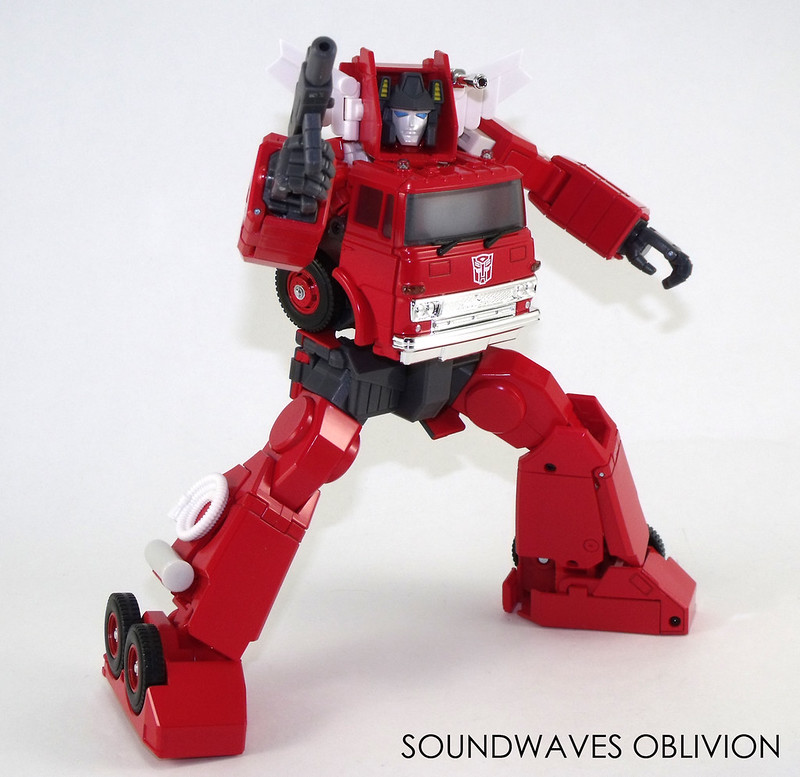 Weapon: Extinguisher Rifle (Translated from the instruction pamphlet)
Inferno’s weapon can be used for both fighting fires or attack. Inferno is a great marksman and is able to fire accurately from any position, combined with the muzzle on his right hand he is able to demonstrate his skill. When he was praised by Meister for shooting down Condor in battle, he humbly replied “It was a fluke.”9
NOTES: 9 "Insectron Syndrome" / "The Insecticon Syndrome" 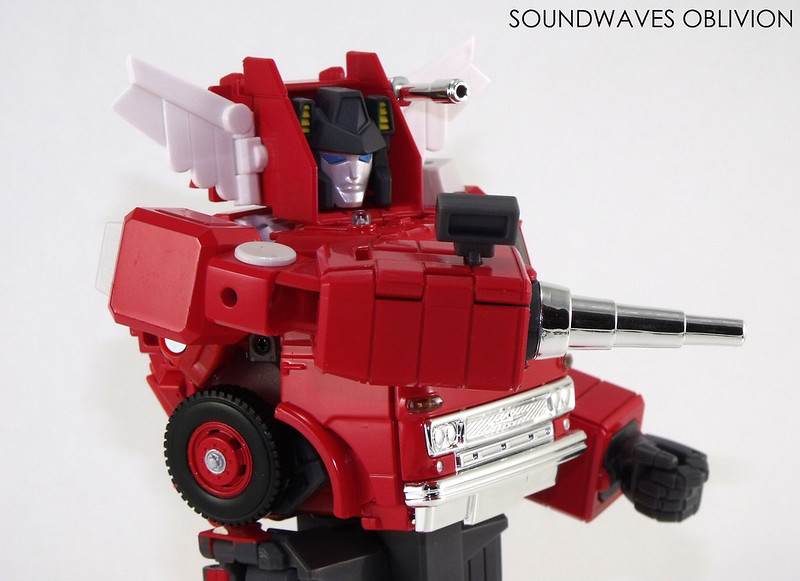 Equipment: Communicator (Translated from the instruction pamphlet)
Inferno’s arm has a built in communication device which allows him to stay in touch with nearby comrades. Maintaining communication with them is of the utmost importance at the scene of a fire. In the 50th episode of “Fight! Super Robot Lifeform Transformers”, “The Target is Convoy” he sent an emergency communication to Convoy after being trapped by Lord Chumbley, however the two communication devices were destroyed by a robotic hose. 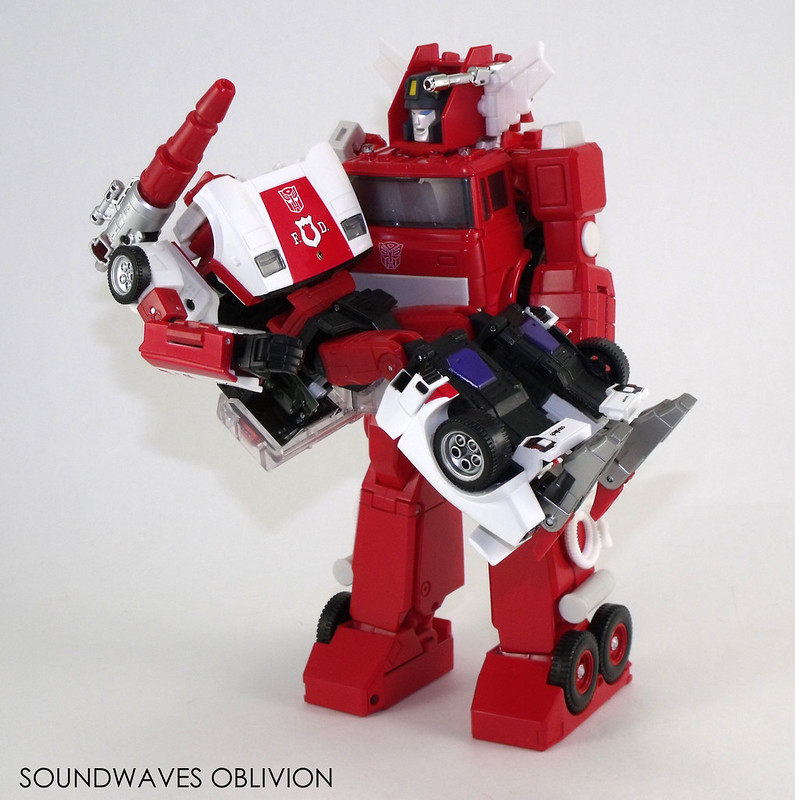 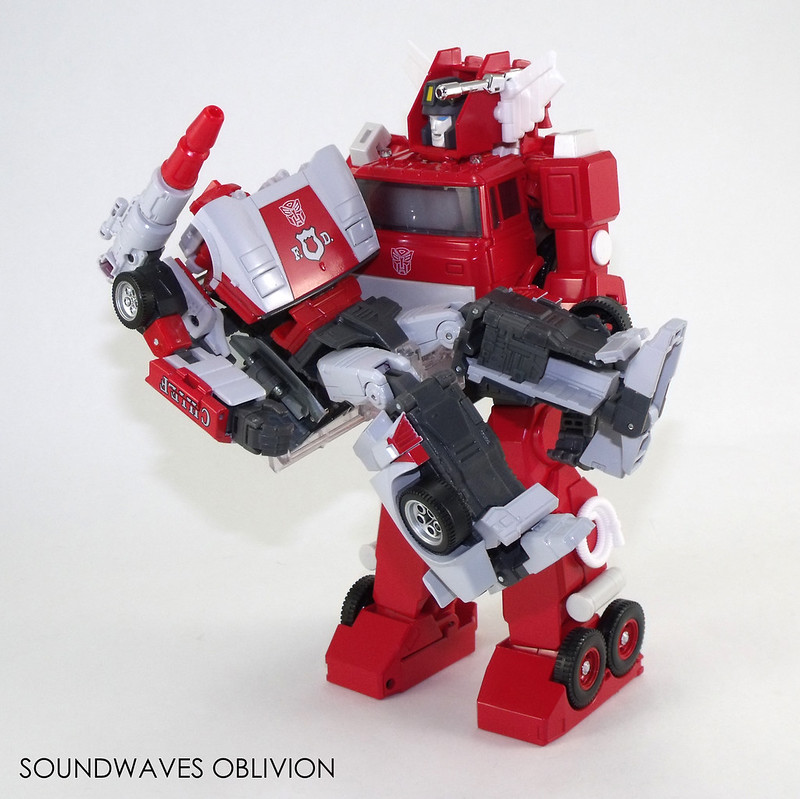 Equipment: Grill (For Alert) (Translated from the instruction pamphlet)
An episode essential to Inferno is episode 23 of “Fight! Super Robot Lifeform Transformers”, “Capture the Negavator.” It is a episode where two friends clash and then make up and shows the unique charm Transformers characters have to offer. By replacing his abdominal grill with this product together with MP-14 Alert, you can reproduce the impressive last scene. 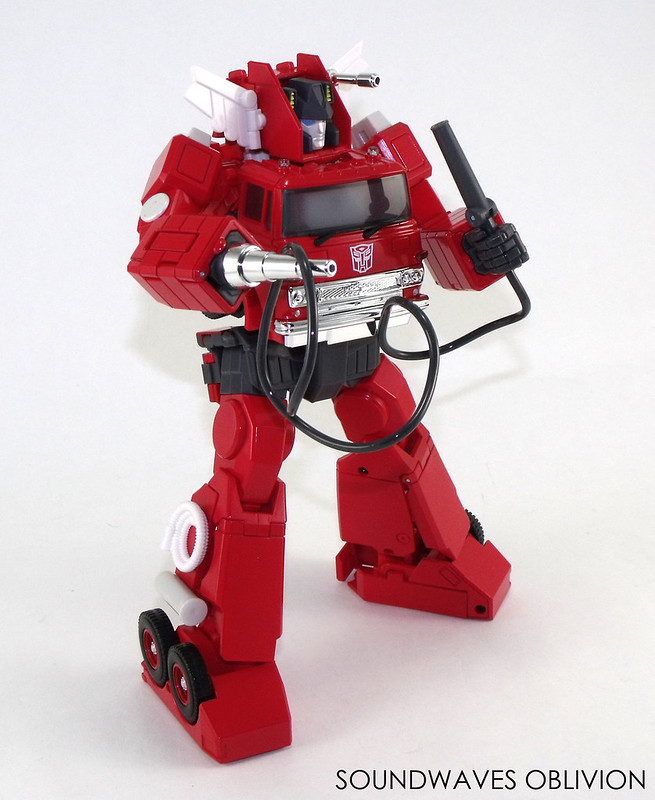 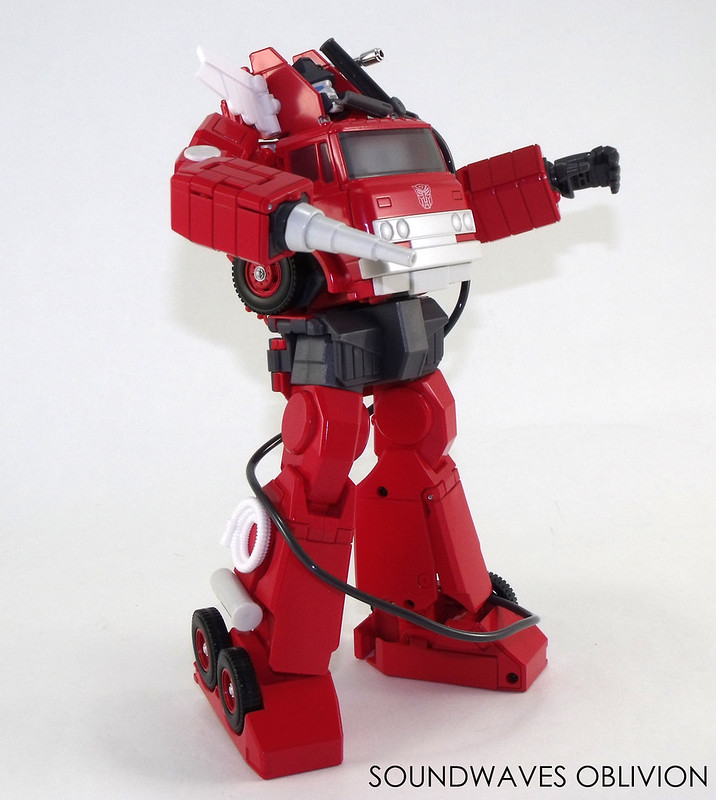 Equipment: Fire Hose (Translated from the instruction pamphlet)
Inferno is always ready to jump into the fire to save human life; Lord Chumbley exploited his bravery and trapped him with a robotic hose in order to get the head of Convoy.
Posted by Jeremy Barlow at 23:07