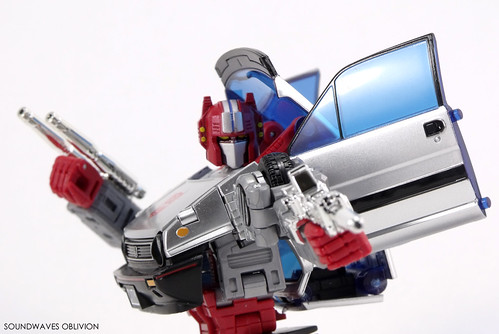 MP-53+ Cybertron High Councillor Senator Crosscut
● Function: High Councillor
● Motto: “Agreements are achievable illusions.”
● Profile:
As the Cybertron’s premier ambassador, he dominates the battlefield without the need for weapons, using his extensive linguistic abilities and excellent negotiation skills. Long ago, in the distant past, he was a member of the government, the Cybertron Senate. He has now become Senator Crosscut, reinstating his dormant office as part of his mission to influence the destiny of the Transformers.
STR...5; INT...10; SPD...6; END...7; RNK...9; CRG...9; FBL...8; SKL...4 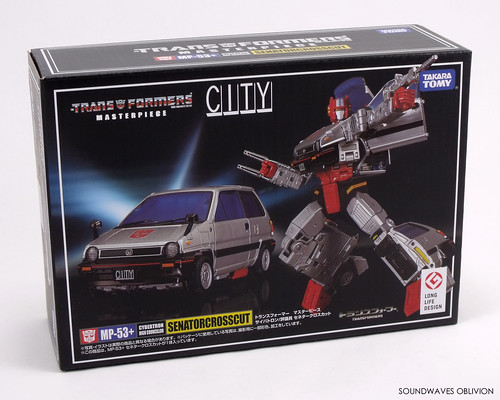 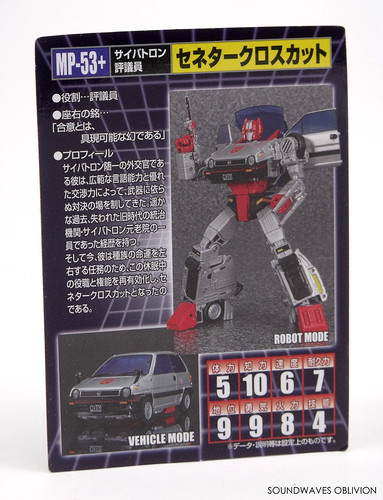 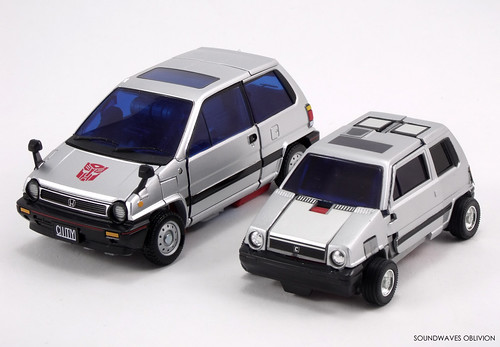 After Masterpiece Skids and Reboost were released in 2021, it was only a matter of time until Crosscut was announced and in July 2021, Takara Tomy revealed MP-53+ Senator Crosscut. 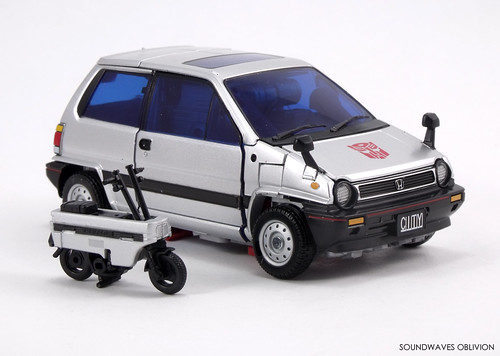 Crosscut was released in March 2022 and is a straight repaint of MP-54 Reboost which comes with identical accessories minus the holographic driver. As mentioned on the reverse of the box (translation below) he now has the "Senator" title as a homage to his appearance in the IDW comics. 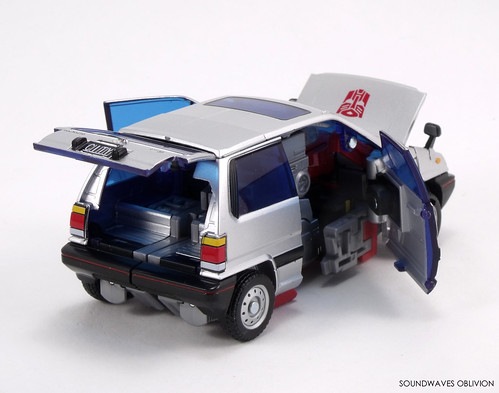 Crosscut is packaged in vehicle mode and the light silver paint with the red Cybertron logo on the bonnet looks great. The translucent deep blue windows have a nice contrast against the silver paint. 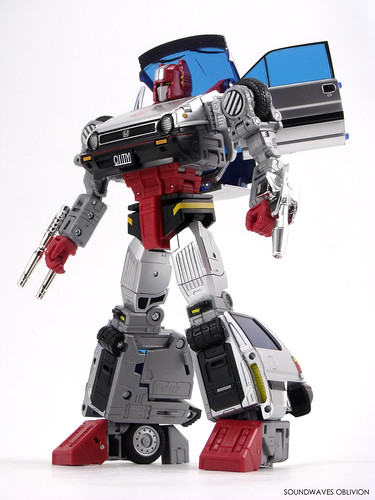 Just like the other Honda's, the bonnet, doors and boot open up. My copy was rather stiff when compared to the others which I've found overall with this figure. 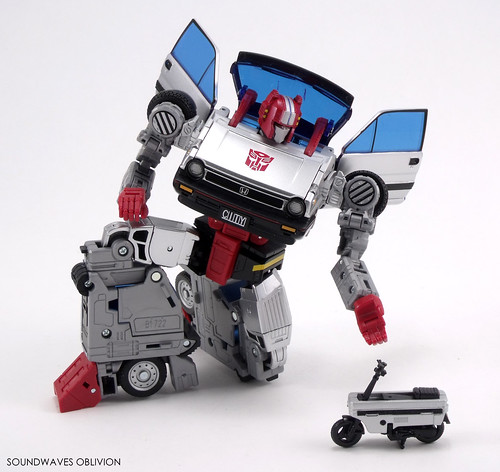 Clutch, the Motocompo and the weapons fit inside the boot, albeit not altogether at the same time. 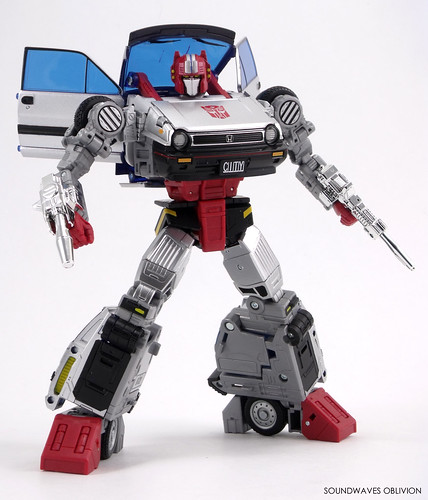 When transforming Crosscut into robot mode I found the roof would not fully peg into the tab in the back. I also noticed what I thought were cracks in the windscreen but they turned out to be red paint from the robots head which must have happened as it was being assembled in the factory. I can't see any paint wear on the head though. 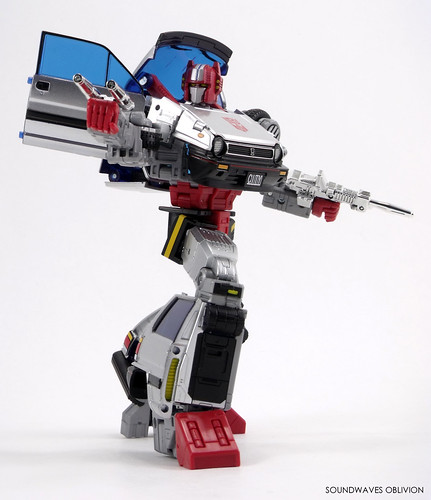 Robot mode looks great and I prefer the overall silver colour to the original red. Crosscut still holds all the weapons well. It's a shame I couldn't find where I left Road Rage when I took the photographs. 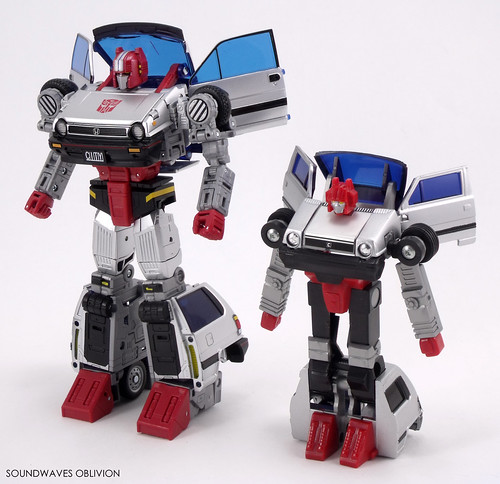 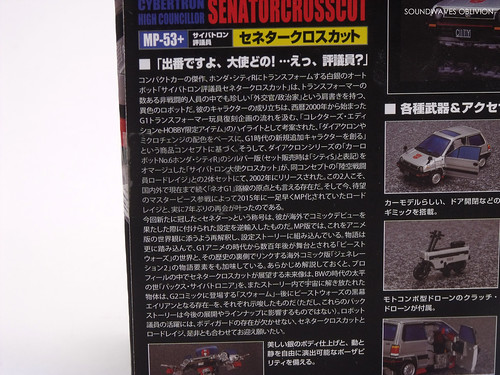 “You’re up Mr Ambassador!...err, councillor?” (Translated from the back of the box)
The silvery white Autobot, “Cybertron High Councillor Senator Crosscut”, transforms into a Honda City-R, a masterpiece of a compact car. He is a unique robot who uses the title of a “diplomat / politician” which is rare amongst the non-combative Transformers. His origins stem from the concept of creating new additional characters from the G1 era based on the Diaclone and Microchange colour schemes. They were conceived as a highlight of the “Collectors Edition e-Hobby Limited Item” series which followed on from the G1 reissue project which began in 2000. The “Cybertron Ambassador Crosscut” was a homage to the silver version of “Car Robot No.6 Honda City R” from the Diaclone series (when it was sold in a set it was called the City S). He was released in 2002 in a set alongside “Land and Air Combatant Road Rage”. These two characters are the originators for the “Neo G1” series which continues to this day in Japan and abroad. And now with his long awaited debut in the Masterpiece series, he is once again reunited with Road Rage after seven years (Road Rage entered the Masterpiece series in 2015). His new title of “Senator” is a homage to the title he was given in his overseas comic book debut. This Masterpiece version reinterprets the title to match the worldview of the animated series and incorporate it into his main story. The story goes further still by adding story elements from “Beast Wars” which is set hundreds of years after the G1 animated series. It also incorporates story elements from the overseas Generation 2 comic. To put this in context, Senator Crosscut’s vision of the future in his profile alludes to the “Pax Cybertronia” from the Beast Wars era, and the object released into space in the story alludes to the “Swarm” from the G2 comic which would later become the alien masterminds from the Beast Wars series (however, these backstories do not affect future developments or the current lineup). We hope you join us in welcoming Senator Crosscut and Road Rage, the bodyguard who is vital to the success of the robot councillor. 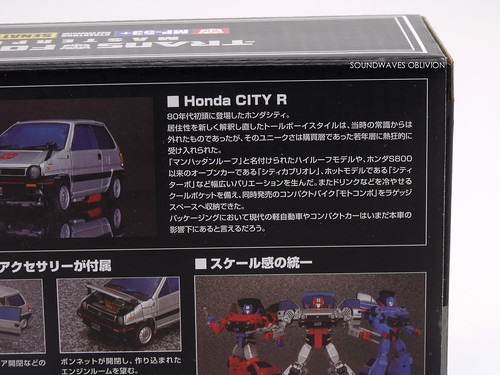 ■ Honda CITY R (Translated from the back of the box)
The Honda City debuted in the early 1980’s. The Tall Boy style was a new reinterpretation of comfort. Although at the time it was out of the ordinary, its uniqueness appealed to the younger generation who were the target market. A wide range of variations were produced such as the high roof model named the “Manhattan Roof”, the “City Cabriolet”, the first convertible since the Honda S800 and the latest hot model, the “City Turbo”. As well as an inbuilt refrigerated glove box to keep food and drinks cool, it had a compact scooter, the “Motocompo” which could be stored in the boot. It could be reasoned that the present day compact cars are still influenced by this car in terms of design. 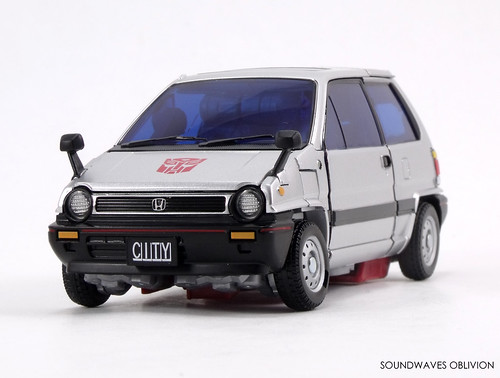 Vehicle Mode: Honda City-R (Translated from the instruction pamphlet)
A silver Honda City-R and several other vehicles are driving around on a strange planet. They are Senator Crosscut and his team; Delta Magnus summarises their mission.
“Beneath Planet Foreston, there is a game changer which could turn the tide of battle. It is estimated there are one million reinforced body frames. When our ancestors were liberated from Quintessa, they were reborn when they created new bodies of their own design. This second generation G2 project went well to begin with, however…..the Diadem Base, which was used as a conversion testing facility, was blown up by a splinter faction called “Regiment” and a large number of these conversion bodies were stolen. Although the G2 project was lost in the subsequent civil war, the design and development plant is still here and functioning on this planet. We have to get there quickly.”
The rock face near the underground plant had a large hole in it, as if it were blasted from the inside. They had an uneasy feeling.
“Let’s go to the main gate and see who's in charge.”
The group descended to the underground entrance and were met with a heavily reinforced door and defensive weaponry. The facility's Artificial Intelligence will only obey commands from the ancient overlords and high ranking officials from the Cybertron senate. Therefore, Crosscut was essential for this mission.
“I am Senator Crosscut, senate affiliation ID: Beta 1002-EHCE-95. Respond.”
“Code error. The name is not in the database.”
“Send an information request, your database is out of date. Verify the current command structure through our ship.”
“We have received an official statement, according to the update, the senate no longer exists.”
“That is correct. However my senatorial status is a permanent appointment. As long as I function, my status is valid.”
After a short pause “...Authentication complete. At your service senator.”
As the heavy door opened, Road Rage cheered.
“Congratulations ambassador, you’ve convinced the ancient AI!”
Without a stop order, the automated planets have continually worked and improved the G2 bodies for millions of years. The results were phenomenal but the problem was the large hole in the surface. They found it was made by a rampaging swarm of prototypes who had evolved abnormally without any defined form. Something bad has been released into the universe…. Road Rage said,
“Well, Lambor’s excited, he’d definitely love to try the G2 upgrade. How about you Cordon? Surely you have the right as well.”
Cordon used to be a G2 conversion tester at the Diadem Base.
“No, I don’t deserve it. Listen Ambassador, I’m the one who arranged the bombing at Diadem. I can’t remember but maybe I was a member of Regiment.”
Cordon’s confession made Crosscut involuntarily look to the sky. What other problems were going to crop up? 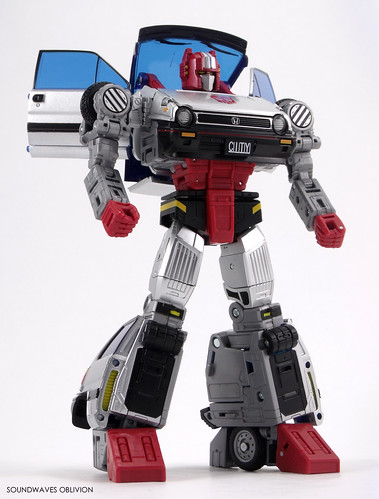 Robot Mode: Senator Crosscut (Translated from the instruction pamphlet)
● Function: High Councillor
● Motto: “Agreements are achievable illusions.”
● Profile:
“Senator” is a title bestowed on members of the Cybertron senate, one of the governing bodies on ancient Seibertron. Senator Crosscut is the lone surviving member of the ancient dignitaries. They were founded aeons ago during the brief period of peace which stemmed from the defeat of their evil creators. Having only known oppression, they finally began to build their own society. Due to their inexperience they ran into many problems and became dysfunctional having been tainted with a social class and authoritarianism. Their society fell apart without seeing the end of the civil war which had broken out. Crosscut was elected a senator toward the end of the senate so he escaped the corruption. Even after his title had lost its meaning, he continued proving his abilities by negotiating with various foreign powers on behalf of his fellow colonists who had fled the war. After a career spanning tens of thousands of years, he received a request from Commander Convoy to establish an alliance with the people of Earth and negotiate the construction of Cybertron City. During diplomatic settings he never carries any weapons, trusting his wellbeing with his personal bodyguard and advisor, Road Rage. However, should the need arise he can deploy multiple defensive weapons using the transfer markers built into the hardpoints on his arms. These light weapons utilise power rectifiers which make them more destructive in the event of an emergency. He sees his reinstatement as a senator for the mission on Planet Foreston as the ideal opportunity for him. Politically the Cybertrons never saw a victory, and he now looks to the future to rebuild a new establishment. To do this the Cybertrons must change their current military structure. He will facilitate the installation of a new high council bringing together great leaders, colonial deputies, warriors and neutral representatives. He is convinced and believes they are ready for it now. 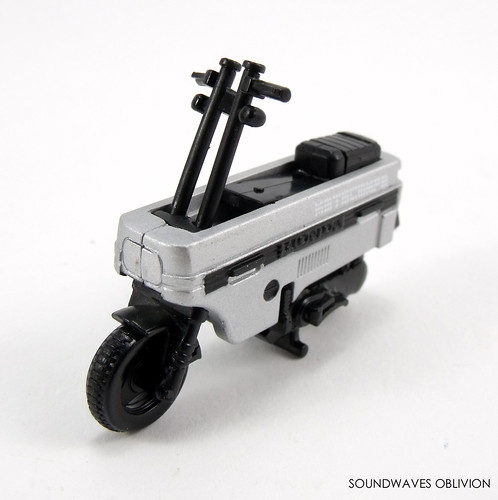 Equipment: “Clutch” Drone & Loadout (Translated from the instruction pamphlet)
The Clutch Drone (Motocompo) is Senator Crosscut’s self-defence and security system. Clutch is equipped with a medium powered electrostatic projector and usually follows discreetly in the background. When the Senator is in impending danger, Crosscut's memories and classified diplomatic data are transferred to Clutch who will then make an emergency escape.
Posted by Jeremy Barlow at 23:55