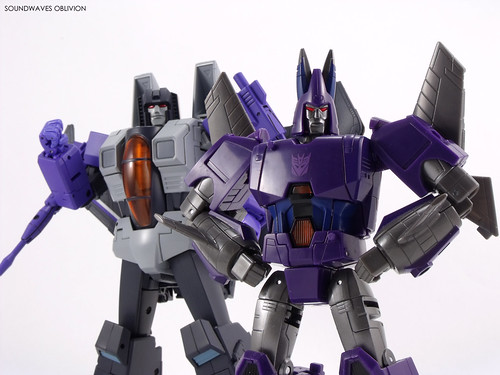 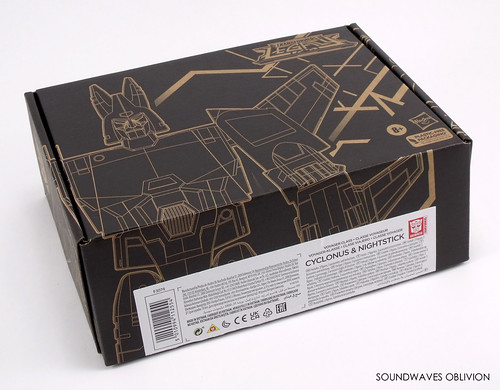 Transformers Legacy Cyclonus was scheduled for release in August 2022 but ended up seeing a release  3 months earlier in May. Cyclonus is a straight repaint of Kingdom Voyager Class Cyclonus and the colours certainly make a difference with this release. 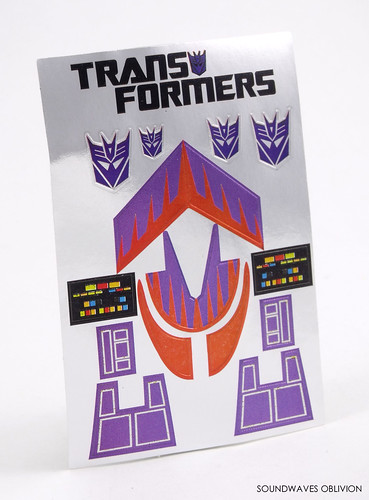 Kingdom Cyclonus is generally thought of as a stand out figure in the Kingdom line but I was lukewarm over the release. The joints on mine were super tight and the rear leg panels had a lot of stress marks out of the box. To transform it I had to loosen several screws but I'm still unable to compress the legs fully for jet mode. The Kingdom colour scheme also has the light purple Takara Tomy usually favour with their domestic Cyclonus and Galvatron releases. 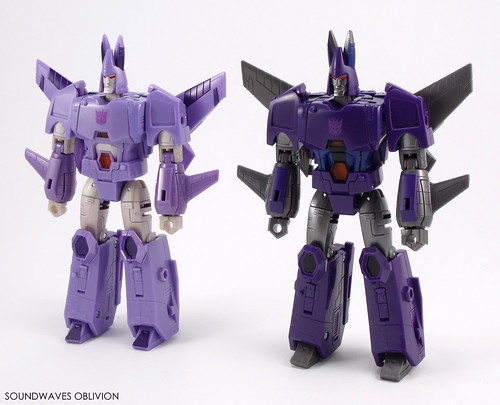 Legacy Cyclonus comes packaged in a windowless cardboard box and is strapped in robot mode to a piece of card along with Nightstick, his other gun and purple blast effects. Cyclonus also comes with a very G1 inspired sticker sheet which I'm in two minds over applying. 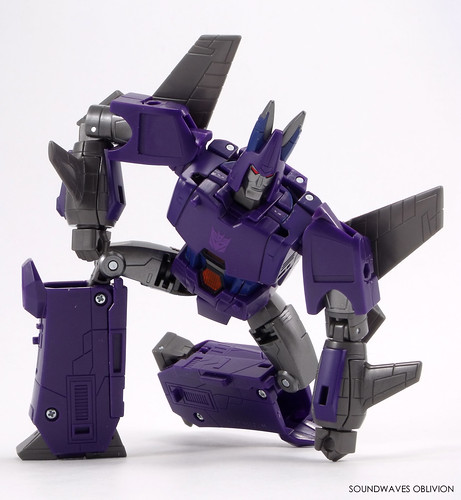 For me the Legacy Cyclonus is far superior. Unfortunately compared to the tight joints on my Kingdom Cyclonus, the Legacy version is rather loose but I can transform it at least and luckily I can tighten the joints myself. 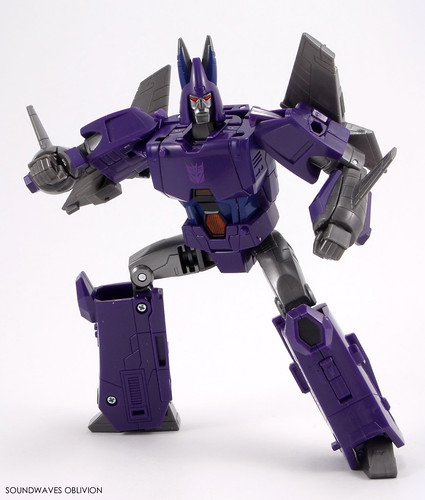 The colour scheme is based in the original 1986 "blue eared" variant of Cyclonus and the dark purple and stony grey face do wonders for this figure. I'm not 100% sold on the face sculpt but the darker grey colour makes it look a lot better than the Kingdom version. 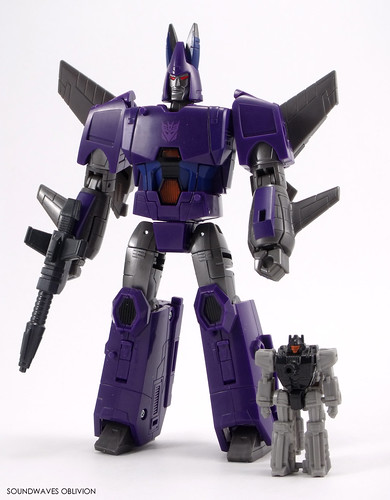 The light piping with Cyclonus, both Kingdom and Legacy work really well. Even with minimal lighting the eyes glow red and the rear of the head has a faux cockpit moulded in with a translucent orange canopy which lets in the light. 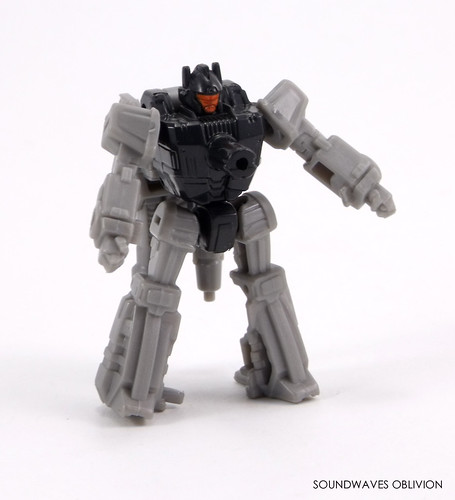 Cyclonus has fantastic articulation which I can now appreciate with the looser joints, especially the ankle tilts. The standard gun is painted a dark metallic grey and the blast effects can be attached to the end of the barrel. 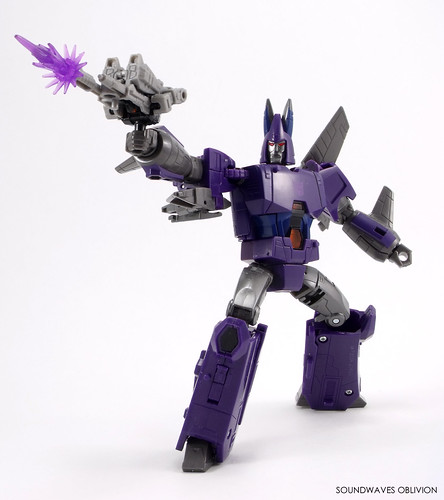 Nightstick is a redeco of Transformers Siege Blowpipe and comes with a purple redeco of the blast effects. Blowpipe has limited articulation and transforms into a gun which can be held by Cyclonus in robot mode or pegged on the top of the jet mode. 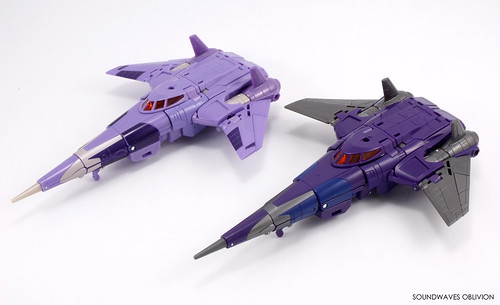 Transformation is where this figure really shines. Much like the 2008 Transformers Universe Deluxe version, the jet's long nose is folded up inside the chest. The legs transformation is simple but achieves a clean rear version of the jet. 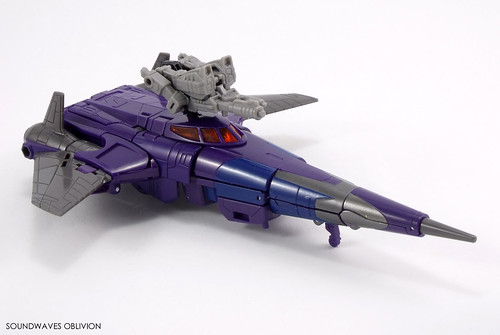 There are three fold able landing gears which are just solid plastic and do not roll. 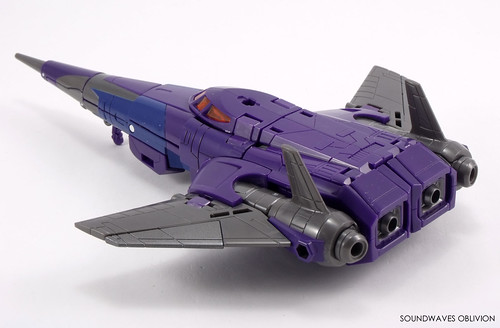 Overall this is a fantastic figure and I'd recommend this over the Kingdom version especially as it comes with a few more accessories and a much improved colour scheme. 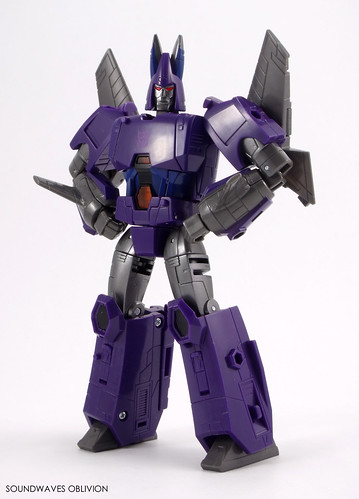