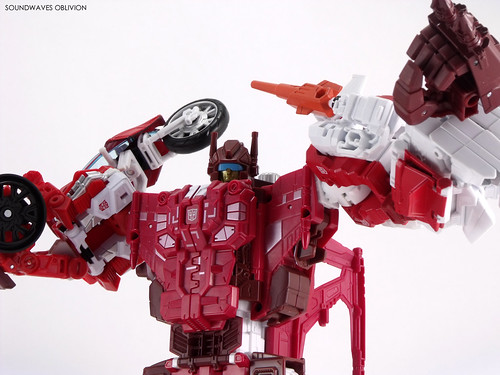 UW-08 Techbot Combiner Warrior Computicon
When Grimlock temporarily became a great genius, he used his new knowledge to gather technological parts from space and built them into 5 high tech warriors, the Techbots. They could unite into Computicon, a force to counter the Destrons new combiner warrior. This giant robot is composed of the Attack Commander “Scattershot” who transforms into the torso; “Afterburner” the right arm; “Strafe” the left arm; “Lightspeed” the right leg and “Nosecone” the left leg. Makes full use of his high-speed data processing capability and his memory banks are said to have unlimited capacity. Calm in battle and deadly accurate; additionally he has high performance communication functionality and is equipped with a radar device. Incredibly advantageous during electronic warfare.
STR…9; INT…10; SPD…2; END…8; RNK…7; CRG…10; FBL…7; SKL…9 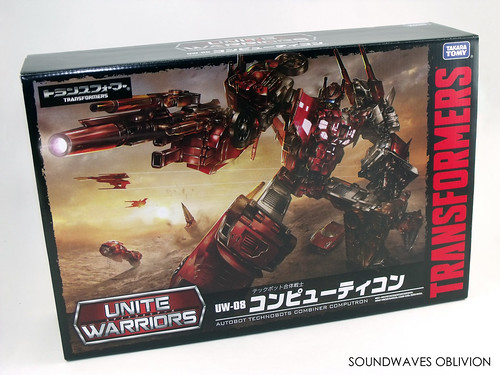 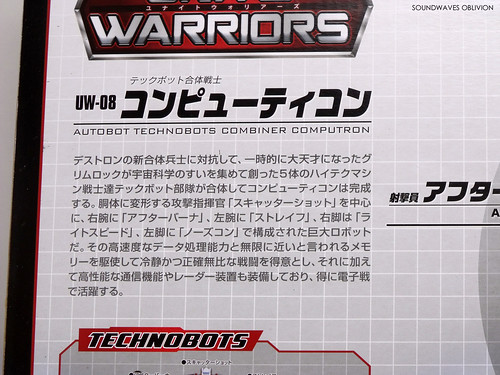 Combiner Wars and Unite Warriors Computron were released around the same time in August 2016, both as box sets and both very different from each other. The Takara Tomy version stayed very close to the original G1 version with a colour scheme based on the cartoon while Hasbro's version. Whereas I do prefer the Unite Warriors version over the Combiner Wars version, Hasbro's version did come with better feet and hands for Computron as well as the first, and so far only, toy version of the Transformer Scrounge, a character first seen in the 1980's Marvel comics. 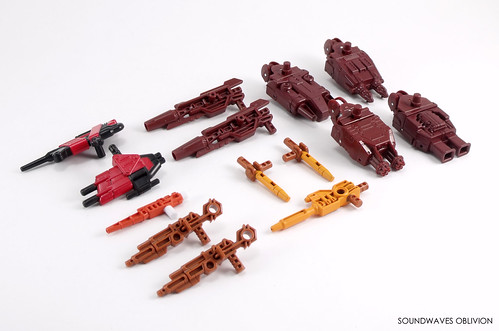 The Unite Warriors are excellently presented in a large box with incredible artwork and a front flap held in place by magnets which when lifted you can see the individual vehicles inside and on the other side of the box flap are the details of the robots including the tech spec and profile. The front of the box has Computron's name in English whereas the katakana text reads "Computicon", his original Japanese name. 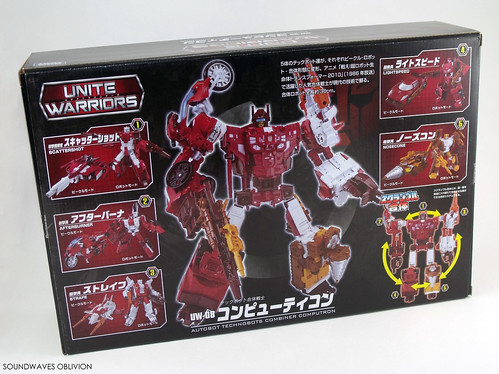 The text from the back of the box at the top reads:

The 5 Techbots transform into vehicles, robots and combine. This popular combiner warrior from the cartoon “Fight! Super Robot Lifeform Transformer 2010” (broadcast from 1986) has been recreated using the latest technology. The height of the combined robot is around 30cm.

Inside the box are the instructions which include a comic panel from the Unite Warriors Offshot story, entitles "Fathers Day Surprise Party!!" featuring the Techbots celebrating with Grimlock. 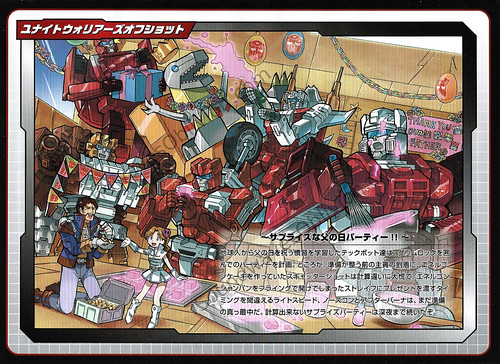 Unite Warriors Offshot: Fathers Day Surprise Party!! (Translation)
After learning of the human custom to celebrate Fathers Day, the Techbots planned a party for Grimlock. However, Grimlock arrived right in the middle of the preparations. Scattershot was rushing to make the Energon cake due to a timing miscalculation, Lightspeed chose the wrong time to pass the gift to Strafe who had just popped the cork on a bottle of Energon Champagne while Nosecone and Afterburner were still in the middle of their preparations. 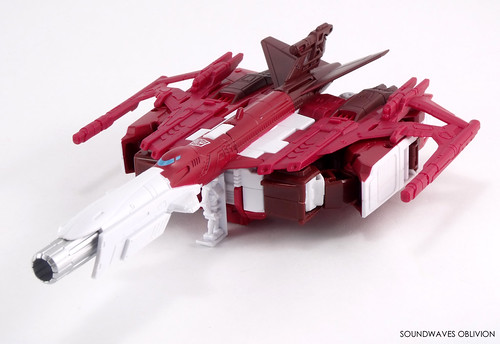 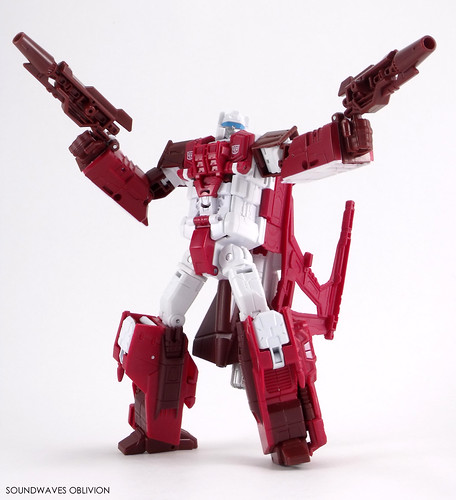 Scattershot, the leader of the Techbots is a retool and recolour of Unite Warriors Silverbolt. The Combiner Wars version also retooled from Silverbolt, yet both look incredibly different. The Unite Warriors version is closer to the cartoon look, especially the remoulded combiner chest. Whereas the jet mode looks very different from Silverbolt, you can see they are the same mould in robot mode, yet the new head, chest and colour scheme look really good. 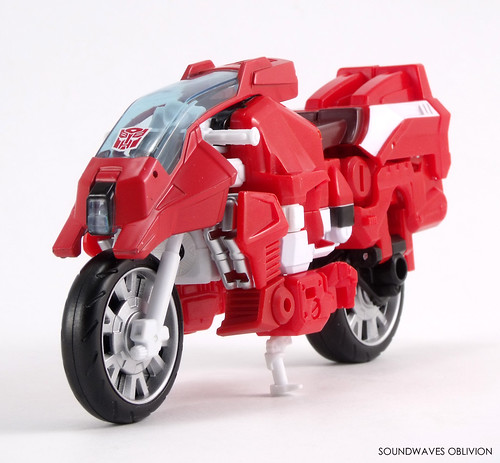 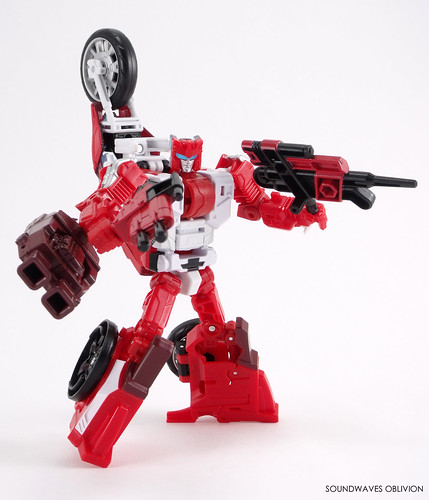 Like Scattershot, Afterburner is a repaint (this time without any tooling differences) of Combiner Wars Afterburner who in turn was a retooled Protectobot Groove. Afterburner is a futuristic motorcycle and doesn't really look like the G1 version. Afterburner's vehicle mode is very different than Groove but in robot mode other than the colours, the only real difference is the new head sculpt which is cartoon accurate. 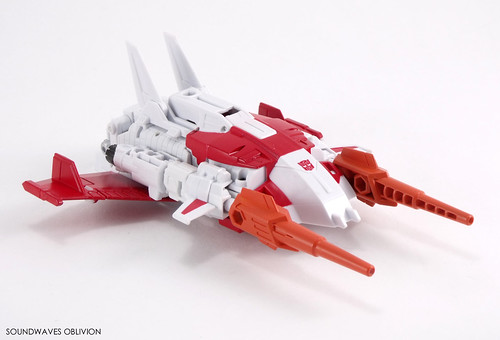 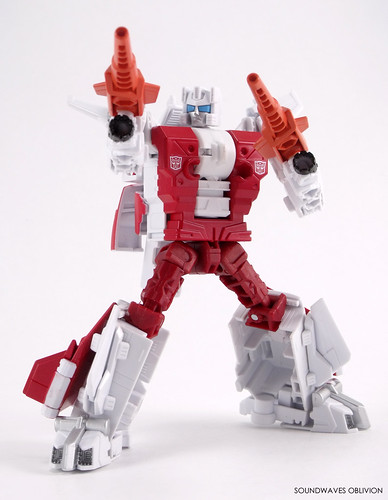 Strafe is a heavy retool and recolour of Unite Warriors Blast Off and for me is the weakest of the set, mainly as the robot head on mine keeps falling off. Strafe looks very close to the G1 model and the vehicle mode looks great. The Combiner Wars version was a heavy retool of Air Raid and it doesn't look as good as Takara Tomys version. The robot mode looks great as well and you can detach the orange guns from the jet mode and use them as hand held weapons. 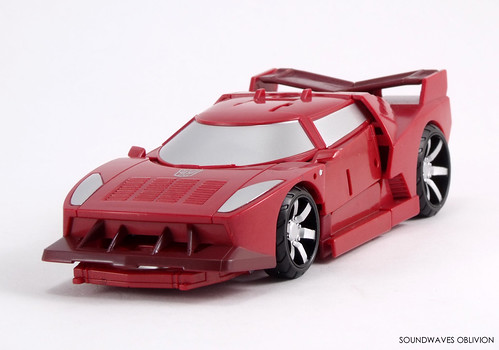 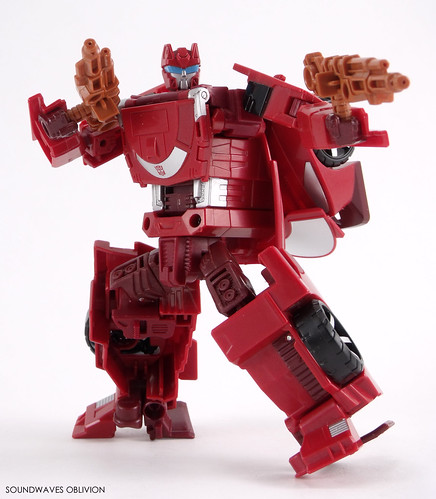 Lightspeed is a retool and redeco of Combiner Wars Wheeljack. The Combiner Wars version is a redeco of Protectobot Streetwise. To me I can't see past that Lightspeed just looks like a red Wheeljack in vehicle mode. Robot mode is decent although I'm not a fan of the robot elbows. 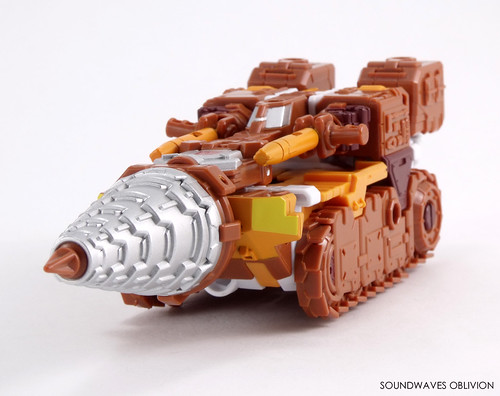 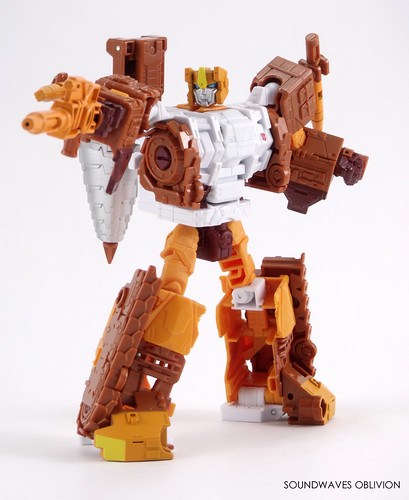 Nosecone is much better than Hasbro's offering which is a retool of Combaticon Brawl. The Unite Warriors version is a heavy retool of Combiner Wars Rook which looks fantastic as the drill vehicle. The drill can turn around and its pointy tip is on a spring which can be pushed inwards so this is probably a safety feature. Robot mode is big and bulky and the drill can be removed and used as a hand held weapon. 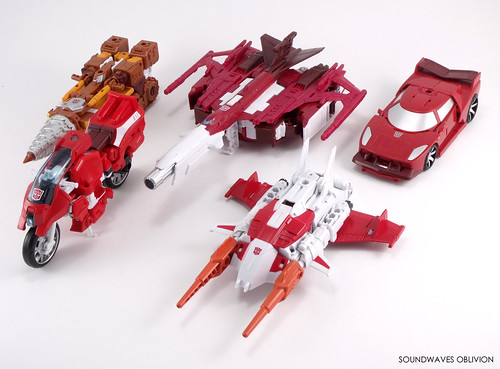 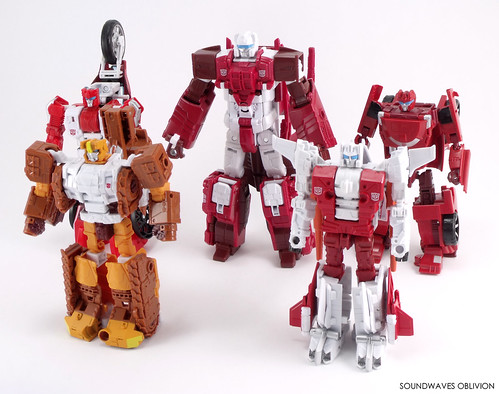 All 5 Techbots transform and combine into Computicon and this robot is the highlight of the set. The robot mode does a great job of looking similar to the cartoon version. The gun is made up of the Techbot guns, a feature I'm not overly enamoured with as it looks rather clumsy. Posability is limited just with the nature of being a combiner. I would have liked to see the Combiner Wars Computron fists and feet used in this set. 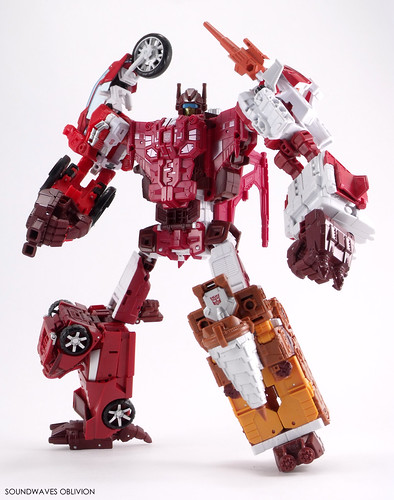 While I'm not a big fan of the Unite Warriors series my favourite  is Devastar, but I have a soft spot for G1 Computron which is why I bought this set. One thing I have noticed with my Computicon is a few of the robots are becoming slightly discoloured, particularly where the red plastic is against the white plastic. The two robots affected are Strafe and Scattershot and some of the white plastic is slowly turning pink. 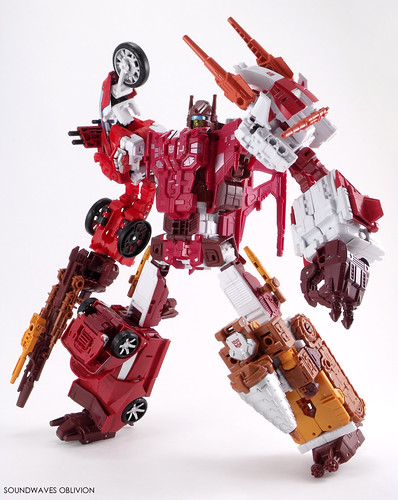 Overall Unite Warriors Computicon is a great reinterpretation of the G1 figure and it is far better than the version released by Hasbro. 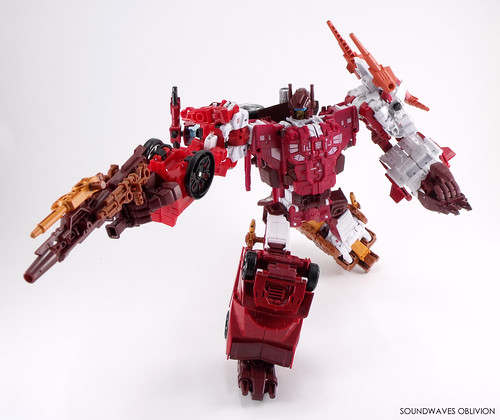