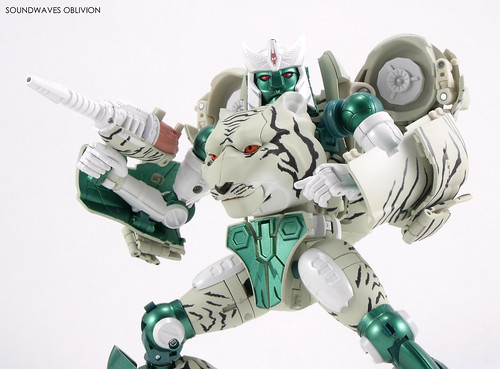 Profile (Translated from the Character Card)
MP-50 Cybertron Polar Reconnaissance Tigatron (Beast Wars)
● Function: Cybertron Polar Reconnaissance
● Height: 2.3m (In Robot Mode)
● Weight: 1.5t (In Robot Mode)
● Profile
This Cybertron warrior loves nature and his solitude. Transforms into a white tiger. Waking on the planet's surface alone probably gave him the strong connection he has with his beast mode. Scours the wild in his animal form, performing solitary reconnaissance missions in the polar sectors escaping detection from base detection sensors. Quiet yet compassionate and respectful. This reclusive samurai has a habit of recounting memories to himself without anyone else around to listen.
STR...8; INT...3; SPD...8; END...7; RNK...4; CRG...10; FBL...7; SKL...6 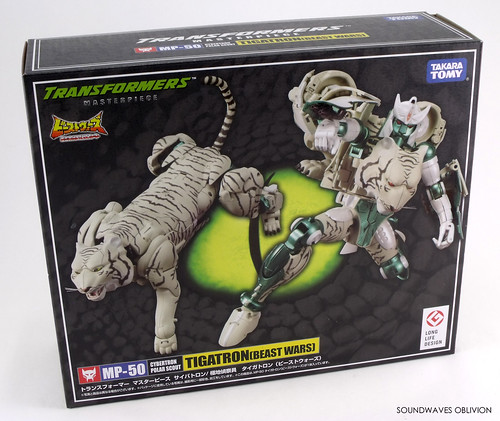 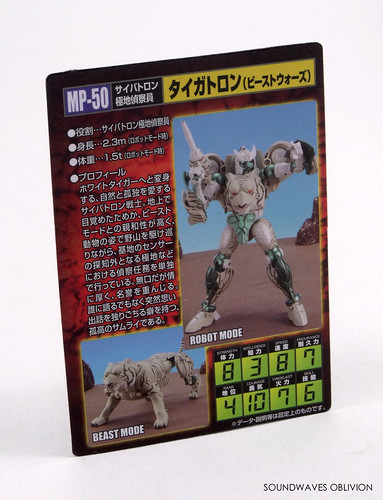 MP-50 Tigatron was unveiled alongside MP-51 Arcee at the 2020 Winter Wonder Festival and initially sparked a bit of speculation. A Masterpiece Tigatron was an inevitable release and many had initially thought Tigatron would be a retool of MP-34 Cheetus (Cheetor). However this Tigatron was a brand new and much larger mould. 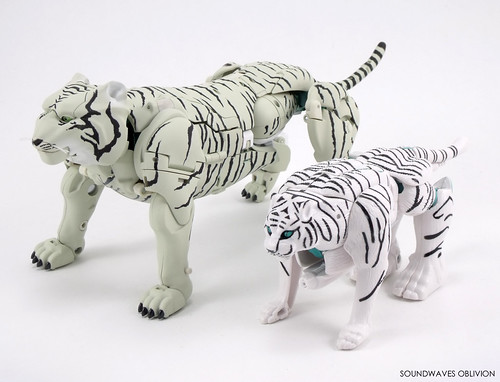 The original Tigatron toy was a straight repaint of Cheetor and was released in 1996. The Hasbro release was an off-white colour with silver accents and a silver face. The Tigatron released by Takara the following year in 1997 was much more show-accurate in colour. 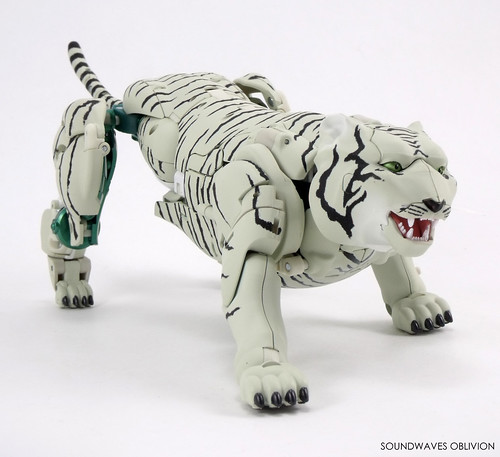 Interestingly Tigatron was initially going to be a standard tiger instead of a white tiger as shown in the 1996 Toyfair catalogue. The name was also spelt "Tigertron" which may be an early version of the name or just a misspell.

Tigatron comes packaged in beast mode and this mode is very close to the original CGI and does a good job at hiding the robot mode parts. You can see the robot mode hands sticking out on the underside and the Tiger Shot gun is not attached to the abdomen so there is a gap on the underside but this is only noticeable when you look for it. Folding up the Tiger Shot gun and attaching it is easy enough and there is nothing else to store in this mode. 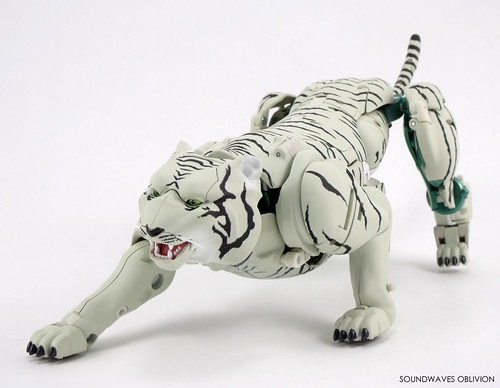 The tiger mode is relatively posable but not to the extent of MP-34 Cheetus. The eyes can mode independently and the mouth can also open revealing a painted interior. The eyes themselves are very loose and will move as you handle the figure, at least they are with my copy. 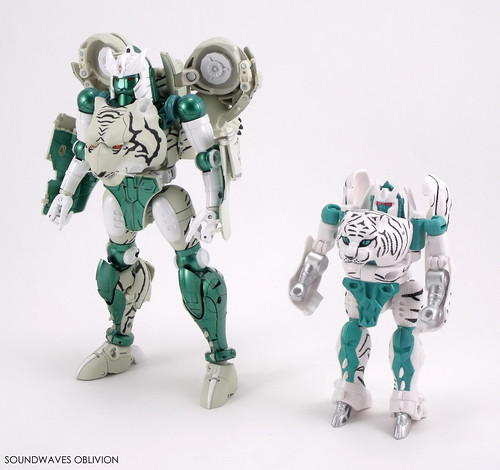 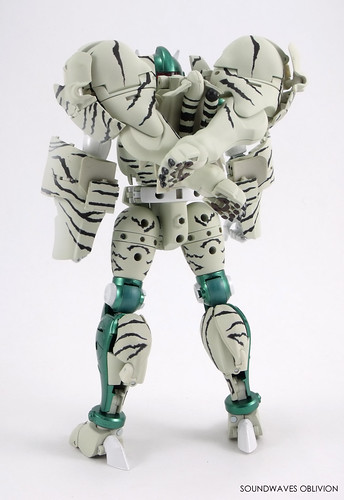 Transformation is straightforward with a lot of panels but it is completely different than MP-34. One of the good things about this transformation is the actual tiger head is used as the chest unlike MP-34 which used a faux cheetah head. The only fragile part of this transformation are the ankles because of the thin plastic and if you aren't careful these parts could easily get broken. 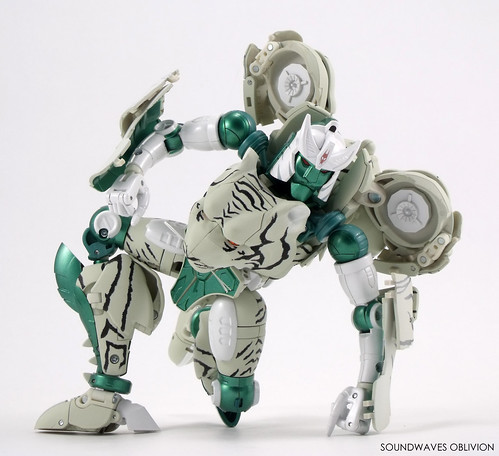 Robot mode is very faithful to the CGI model and looks very impressive. Tigatron has a lot of articulation in this mode including a very stiff ab-crunch, so much so I didn't risk trying it. The panels do get in the way when moving the arms especially with the elbows on my copy being very tight. The knees however are very odd; the hip joint for beast mode is just below the robot knees and provides additional movement whether you want it or not. This is the only negative point of the figure. 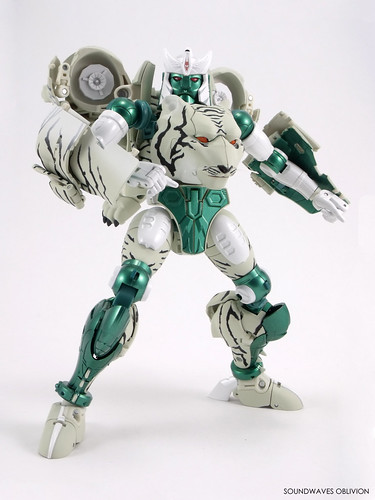 As well as the Tiger Shot handgun, Tigatron also comes with the Tiger Cannon, a small weapon which clips onto Tigatron's right hand side arm panel. You are supposed to fit this over the tab of the arm panel but it looks like it could break the tab if you do this. 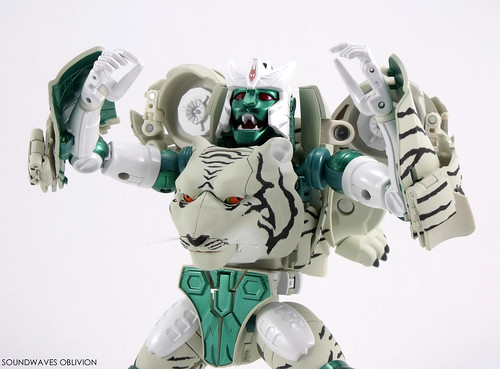 The "Hacking Device" is a translucent purple rubber hose with one end being able to slot into the side of Tigatron's head. Tigatron also comes with a Megatron head cube puzzle which featured in the same episode as the Hacking Device. Megatron's head has two side panels which just rotate around; the head itself is roughly the same size as MP-43 Megatron's head. 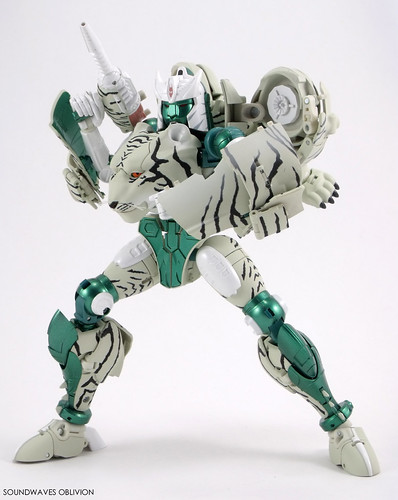 Tigatron comes with 4 additional faces which are described as anger, sorrow, surprise and hacking. The hacking face is identical to Tigatron's neutral face apart from the blue eyes. On my copy I found these faces difficult to fit because of the cheek guards. 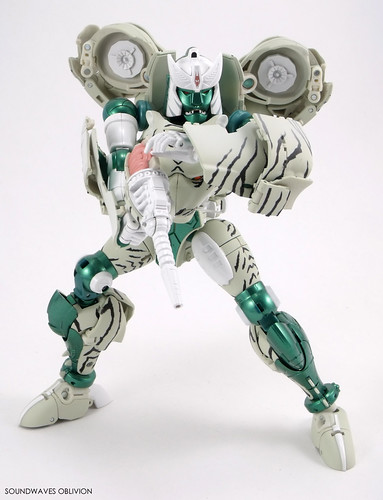 Overall Tigatron is a fantastic figure and definitely one to pick up. 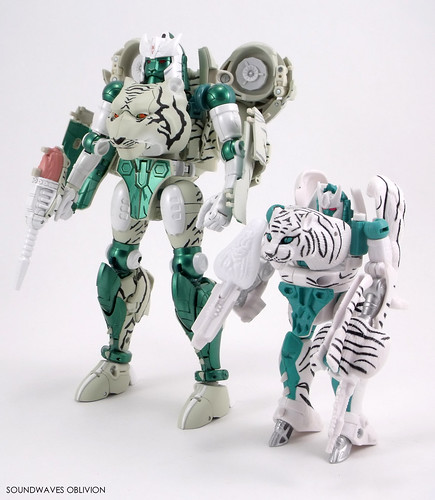 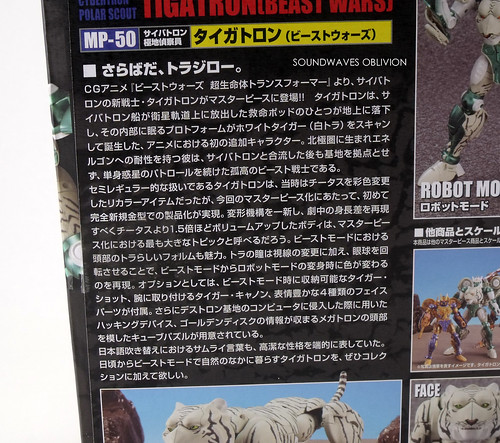 ■ Farewell Torajiro. (Note: Torajiro is Snowstalker) (Translated from the back of the box)
From the CG cartoon, “Beast Wars Super Robot Lifeform Transformers”, comes a new Masterpiece Cybertron warrior, Tigatron!! Tigatron was the first extra character introduced in the cartoon after one of the orbiting stasis pods which had been released by the Cybertron ship, landed on the planet's surface and the protoform inside scanned a white tiger. Born in the Arctic and resistant to Energon, he is a solitary beast warrior who patrols the planet without being tied to the other Cybertrons. Tigatron, a semi-regular in the show, was a recolour of Cheetus but for this Masterpiece it was decided a new mould will be created. The body has a brand new transformation and is 1.5 times larger than Cheetus to reproduce the size difference from the cartoon which is the most significant feature of this Masterpiece model. In beast mode the tiger's head is captivating. As well as being able to alter the tigers line of sight, you can change their colour when transforming from beast mode to robot mode by rotating the eyeballs. Optionally, the Tiger Shot can be stored in beast mode and it also comes with a cannon which attaches to the arm as well as four additional expressive faces. There is also a puzzle cube in the form of Megatron’s head which contains information on the Golden Disc as well as the hacking device used to break into the Destron’s computer. He is played as a samurai in the Japanese dub which expresses his noble personality. Tigatron regularly lived in nature in his beast mode and we hope you add him to your collection. 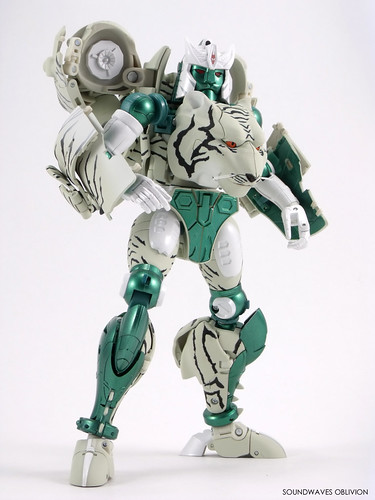 Tigatron (Beast Wars) (Translated from the instruction pamphlet)
● Function: Cybertron Polar Reconnaissance
● Height: 2.3m (In Robot Mode)
● Weight: 1.5t (In Robot Mode)
● Profile
Just before the Cybertron’s spacecraft crash landed on Planet Energoa, Convoy released the stasis pods into orbit, saving their lives. In episode 7 “Solitary Warrior Tigatron”, one of the stasis pods landed in the frozen northern sector. Using the moon to bounce a laser pulse emitted from the Cybertron base, the stasis pod was activated and it scanned a white tiger which was in the immediate vicinity. The protoform was transformed into the Beast Warrior, Tigatron. When he awoke he didn’t know which side he was on due to faulty identity circuitry but he chose Convoy over the cowardly Megatron. He decided to live in the wild with Torajiro until he felt like a Cybertron Warrior again. This was the birth of the lone samurai warrior, Tigatron. Tigatron speaks in “gozaru” (classical Japanese) and loves his own company. He never fully settled at the Cybertron base, preferring to wander the wilderness in his beast mode and monitor the Destrons activities from afar. His regret over the floating island, a paradise rich in nature, turning into a battlefield was very touching. His resistance to Energon made him more in tune with his Beast Mode so when Convoy and the other Cybertrons were overtaken by their beast instincts, Tigatron was able to guide them through, finding balance allowing them to live in harmony with their beast side. During a battle, Torajiro died in a rock slide caused by Tigatron. This affected him so much that he vowed never to fight again. He doesn’t intend to fight, preferring peace and nature. He fostered a deep friendship with Airazor, another new Cybertron member. Because they were both born on the planet, neither were affected by the quantum surge which happened at the beginning of “Beast Wars Metals” so they avoided becoming metallic. When Tigatron and Airazor searched for other stasis pods they were abducted by aliens and went missing. What was their fate----!?
STR...8.0; INT...3.0; SPD...8.0; END...7.0; RNK...4.0; CRG...10.0; FBL...7.0; SKL...6.0 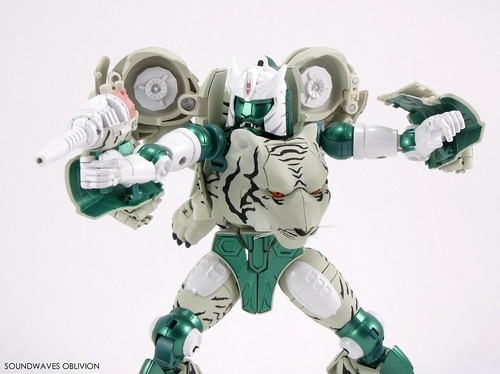 Weapon: Tiger Shot (Translated from the instruction pamphlet)
Tigatron’s hand-held rifle used for rapid fire attacks as well as sniping. A lightweight weapon and easy to handle; it can hit targets up to 10km away. It also has a freeze mode, firing icy laser blasts. It was once used to extinguish a forest fire. In beast mode it folds up and stores in his abdomen. 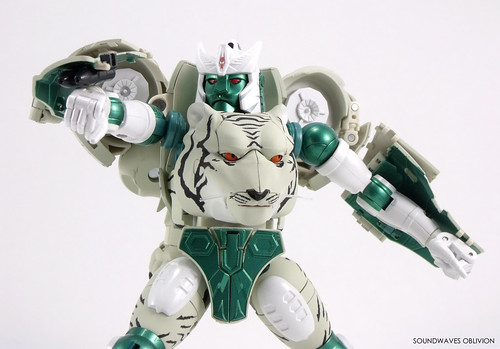 Weapon: Tiger Cannon (Translated from the instruction pamphlet)
A powerful double barrelled missile cannon equipped in Tigatron’s arm. It has a 5km range and was used in his first battle where he took out Megatron. 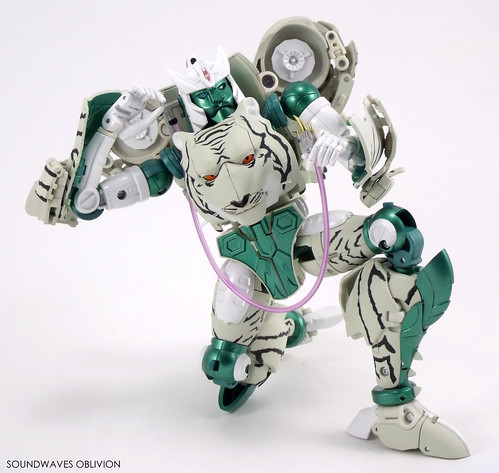 Tool: Hacking Device (Translated from the instruction pamphlet)
The covert Tigatron is an espionage expert. In episode 24 “They Come!”, he infiltrated the Destron base. He broke into the Destron computer using a hacking device which he attached to his head module. 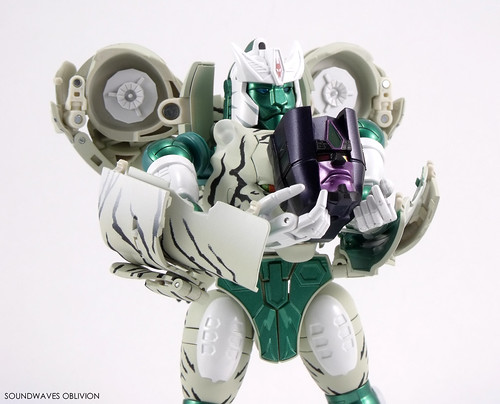 Tool: Megatron Cube Puzzle (Translated from the instruction pamphlet)
Within the Destron computer, Tigatron found data which looked like an altered version of Megatron’s head. By solving the puzzle and returning the cube to the image of Megatron’s head Tigatron was able to unlock the data which revealed that the Golden Disc was made by aliens.
Posted by Jeremy Barlow at 22:17