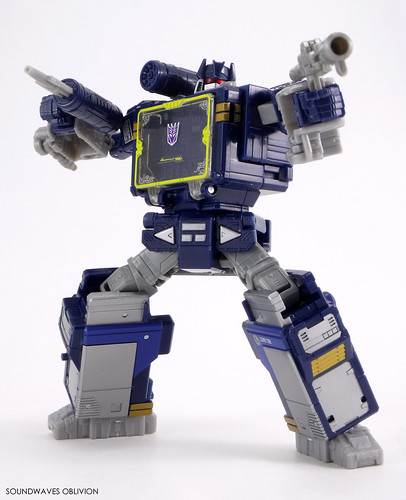 The Netflix War for Cybertron Trilogy Soundwave is a much welcome release. Once again Soundwave has returned to his original cassette player form which is almost a replica of the original 1984 version. Although the 2016 Titans Return Leader Class Soundwave had a cassette player mode, in my opinion it doesn't look as good as this latest release. 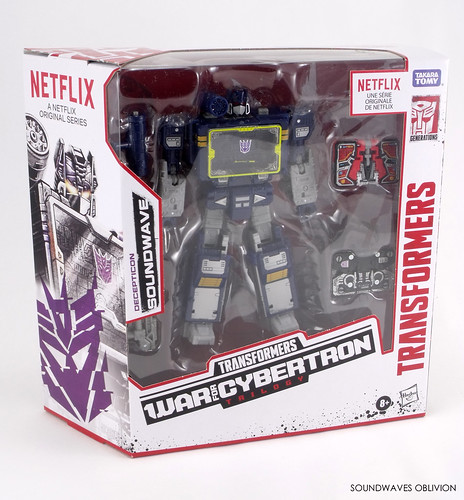 Potentially the recent growing popularity of the cassette tapes may have played a part in Soundwave returning to his original form other than another generic SUV type alternate mode. 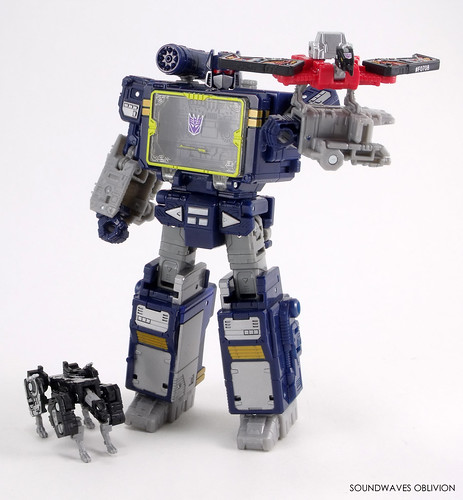 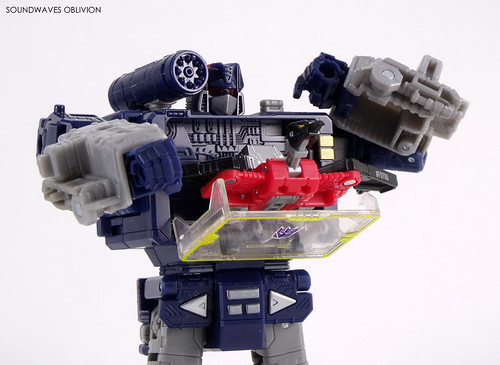 Soundwave comes in a giftset packaged with Ravage and Laserbeak who are on their Micro Cassette forms. All of these figures are retools and minor repaints of their previous 2019 releases in the Transformers Siege line. Both Ravage and Laserbeak feature new head sculpts and they have been repainted to replicate their G1 counterparts. 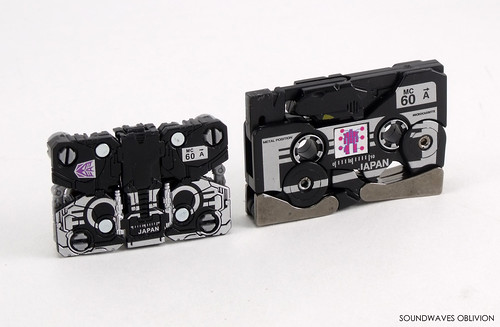 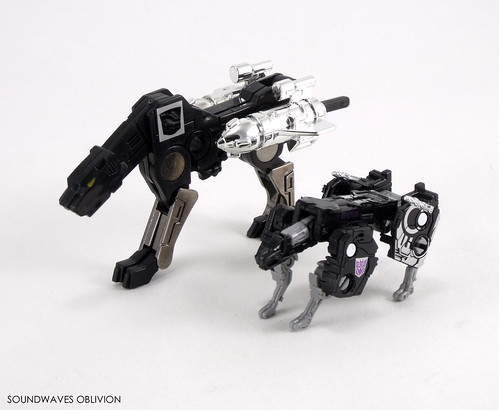 In cassette mode Ravage looks very close the the original cassette whereas Laserbeak looks like the rear of the original G1 version. Potentially the underside of the cassette mode could have been repainted to resemble the original Micro Cassette. Out of the two I prefer Laserbeak, he has a great transformation and feels solid in both modes. Ravage however looks great in cassette mode and that's about it. The transformation is almost like the Masterpiece version where you feel like something is going to break. Unlike the Masterpiece version however, the robot mode doesn't really look that good. Another minor niggle I have with my set is neither cassette fit particularly well in Soundwaves chest. 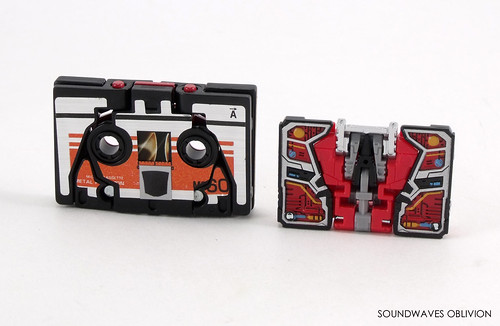 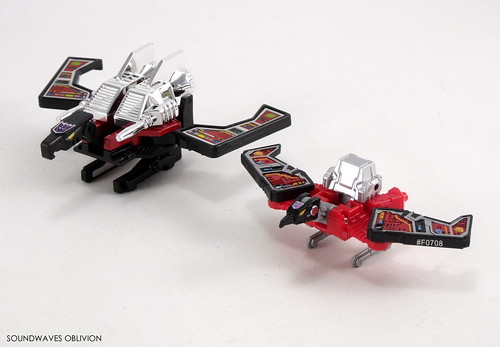 Soundwave is a major retool of the Siege version and comes packaged in robot mode. The noticeable differences in robot mode is the missing the distracting paint scuffs of the Siege version and the visor is now cartoon accurate red instead of yellow. The rocket booster backpack is now absent but there is the faux cassette player button section instead. Soundwave retains the sledge sections from his Siege vehicle mode which seem to be retained to clip the arms together in the cassette player mode. Soundwave also comes with the third grey weapon which could have been discarded for this release. It can either serve as a handheld weapon or can be used to combine Soundwaves other two weapons. 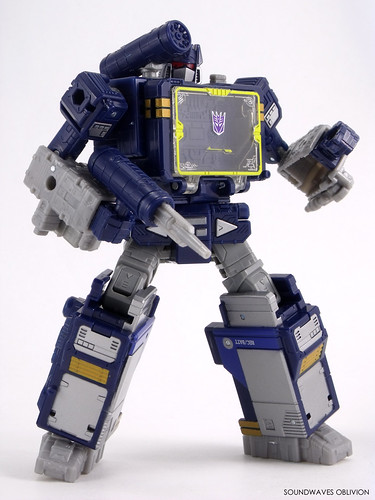 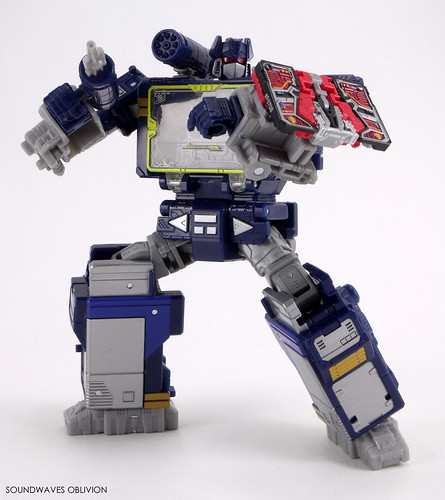 Soundwaves transformation is simple enough and in cassette player mode it does look very similar to the original G1 version and is pretty much the same size. Unlike the original the two main weapons do not store in the robots back as batteries but they can peg on the outside. 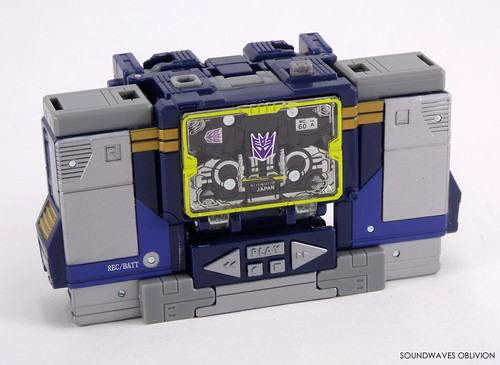 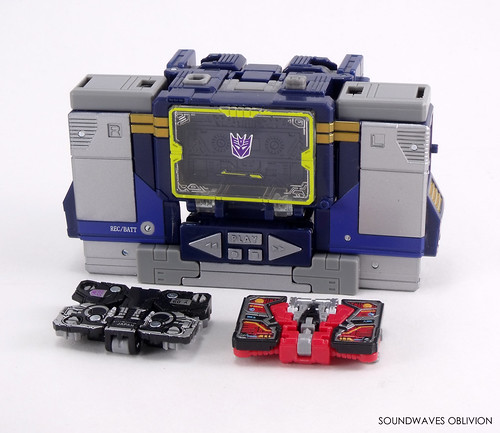 This figure is an absolute must have if you are a fan of Soundwave, if you can actually find a copy that is without paying an extortionate price. 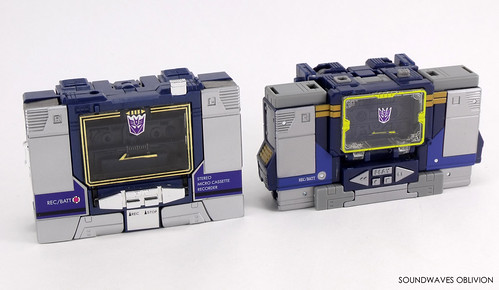 Email ThisBlogThis!Share to TwitterShare to FacebookShare to Pinterest
Labels: War for Cybertron: Netflix