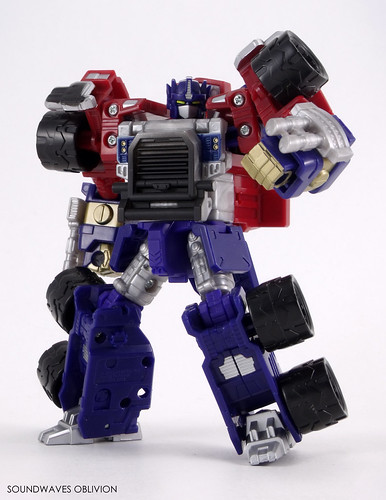 Transformers Armada marked a new beginning for the Transformers toy line with both Hasbro and Takara working together on the same series. This certainly raised the hopes of many and following on from the amazing Car Robots / Robots in Disguise (RiD) line I couldn't wait to see what was coming up. 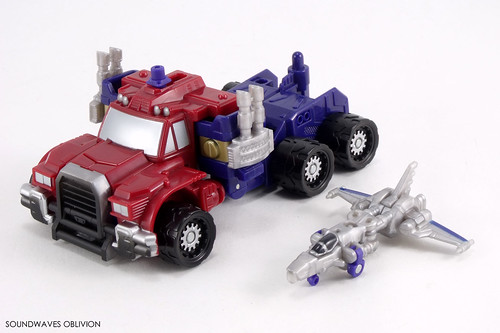 In 2002 there were reissues for collectors being released with Hasbro's Commemorative Series and Takara's Transformers Collection Series and with the new series Hasbro and Takara needed to concentrate on younger audiences. The earlier Car Robots / RiD figures had been criticised for being too complicated which is what Transformers Armada addressed. The main focus of the line were small Transformers called Mini-Con's (or Microns in Japan) which could attach to larger transformer figures via ports which could activate gimmicks. Each Transformer came packaged with a Mini-Con partner and the Mini-Cons were also sold in sets of three. 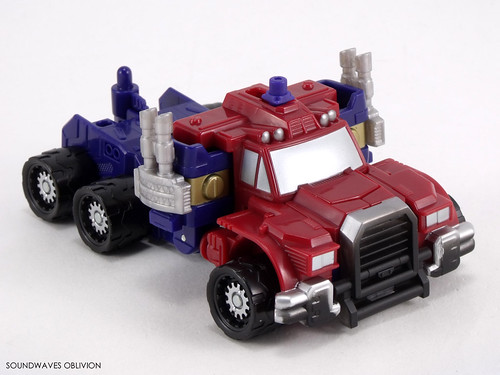 The new size classes were Mini-Con (Basic), Super-Con (Deluxe), Max-Con (Ultra) and Giga-Con. The "Super Base" Optimus Prime and "Supreme" Unicron were alone in their size classes. The Super Base Optimus Prime was touted as the must have figure of the series and on paper it looked great but in hand compared to the previous years RiD Optimus Prime (Super Fire Convoy) it was certainly lacking. Because of the gimmicks the figure suffered with poor articulation and an odd looking super robot mode. Luckily however Optimus Prime was also released in the Super-Con price point and this is a much better figure and still looks great to this day. 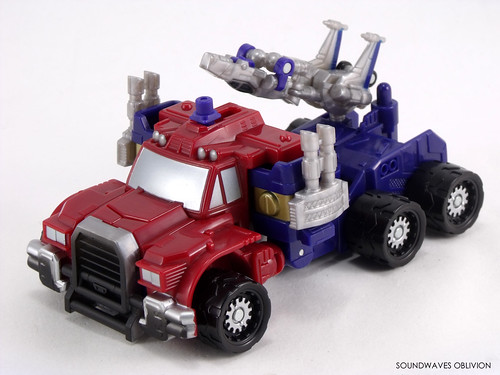 The initial releases of Super-Con Optimus Prime did not have the Autobot emblem but this was corrected with later releases. I own both versions but the figure pictured is the earlier release without the Autobot logo. Although the Super-Con Optimus Prime was without the trailer, it came with a new Mini-Con figure named Over-Run which was a grey jet that could also turn into a hand held weapon as well as a robot. 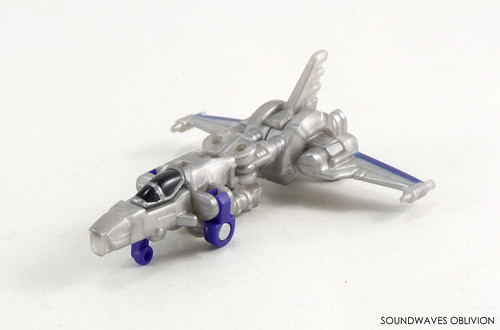 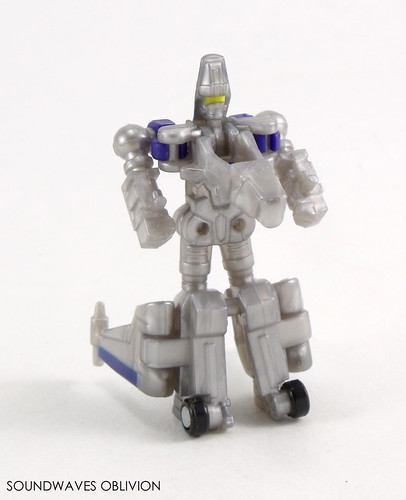 Optimus Prime does look sleek in the semi-cab mode and also has the advantage over the more expensive version by not having robot mode hands peeking out of the back of vehicle mode. 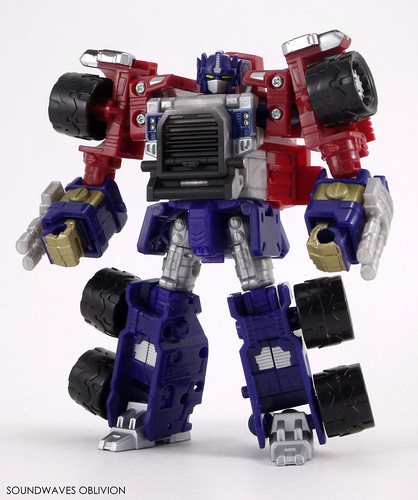 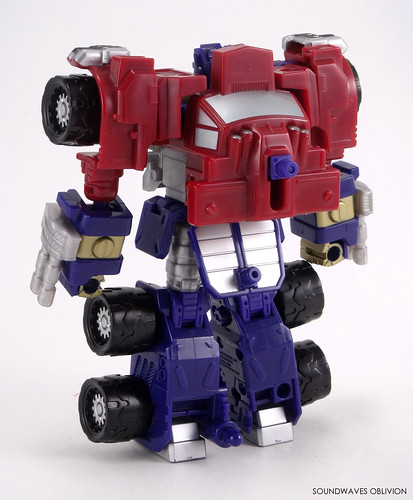 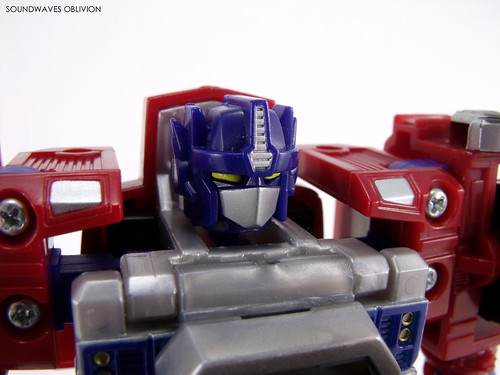 The forearm smokestacks do detach but unlike the Super Base version they don't combine into a hand held gun. Over-Run or any other Mini-Con can attach to the port on Optimus' back to activate the "punching" gimmick by moving the peg up and down. Optimus can also hold Over-Run in his gun mode. 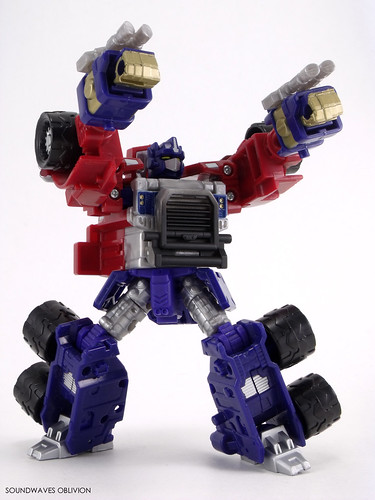 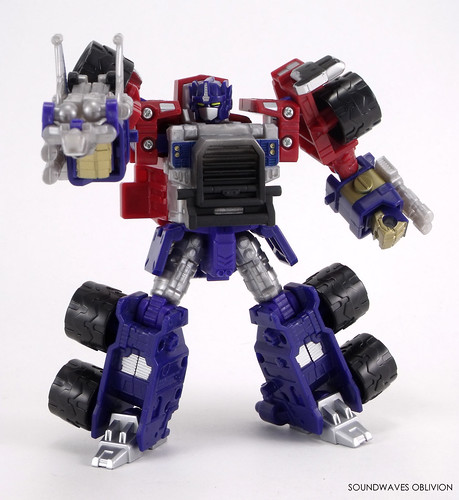 Overall this is a great figure and well worth hunting down; in my opinion next to Unicron, this is the best figure from the Armada series. There are various repaints of this mould to track down as well:- 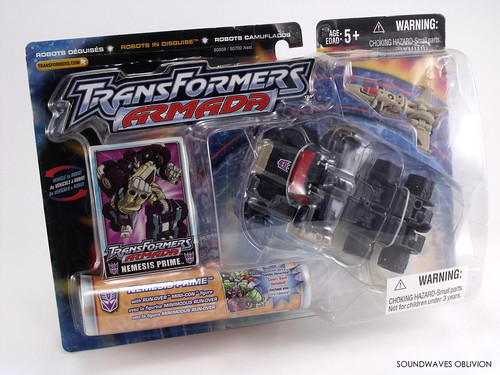 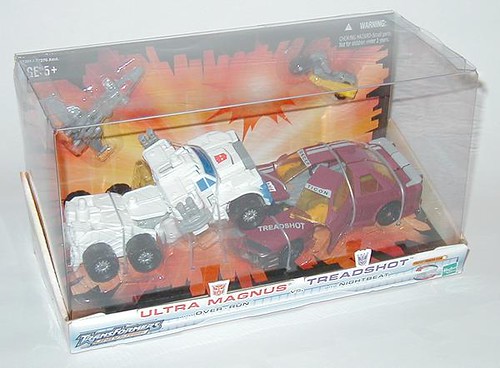