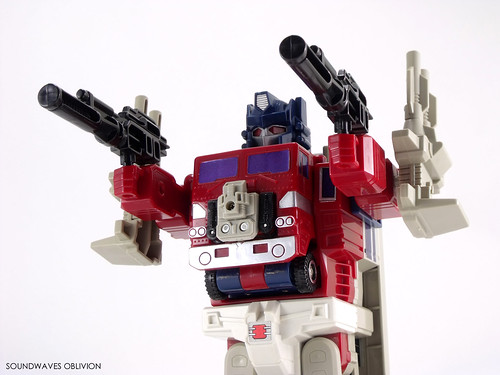 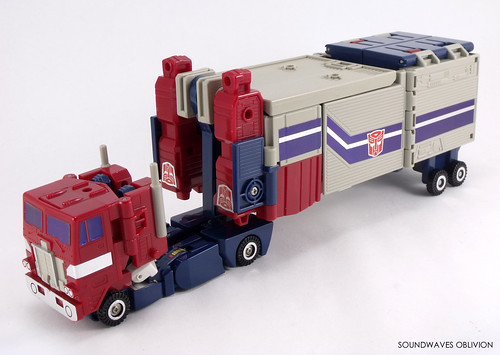 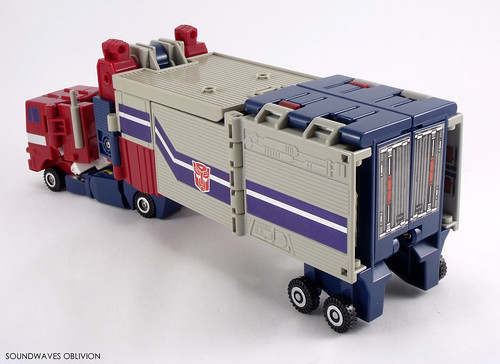 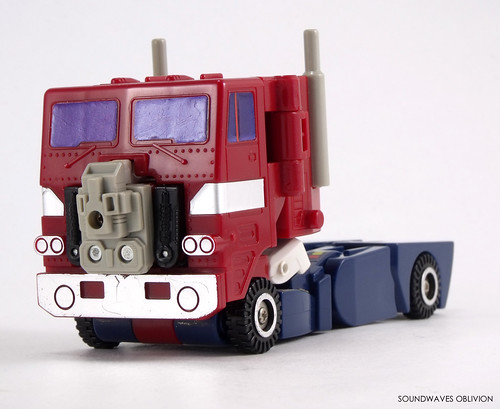 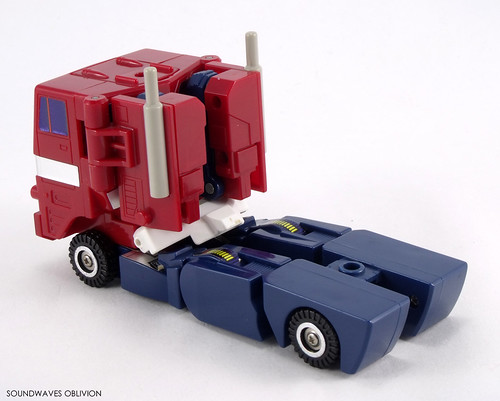 In Japan, Takara released Powermaster Optimus Prime as a brand new character called Super Ginrai but it was Hasbro's version came that first. In an interview (Transformers Generations, 2001, p126), Takara toy designer, Kojin Ono mentions how happy he was to be able to retool the mould. He added a die cast metal cab, translucent blue windows, new chromed shortened smokestacks, retractable fists for the larger robot mode and a new bumper. The updated removable bumper also appeared on later releases of Hasbro's Powermaster Optimus Prime. A second character, God Bomber, would also be released by Takara which could combine with Super Ginrai to form God Ginrai. 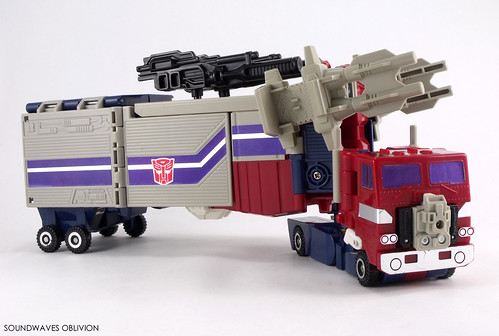 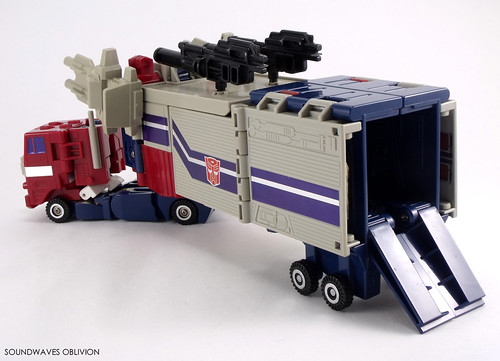 In 2003, Hasbro reissued Takara's God Ginrai as "Powermaster Optimus Prime with Apex Armor". A second Asian exclusive was released in 2012 in a different styled box.
Like the original 1984 version, Optimus Prime is a tractor trailer. The accompanying weapons can attach to the trailer for a "battle mode" and the Nebulan figure "Hi-Q" transforms into an engine which plugs into the front grill of the cab. An additional feature of the trailer is the opening rear doors of the trailer. I always used to store the larger robot head in there. You do need to be careful attaching the trailer to the cab as the plastic peg could easily snap off, something which happened to my original figure. Another fragile part of this figure are the smokestacks, the tips of which are particularly thin. 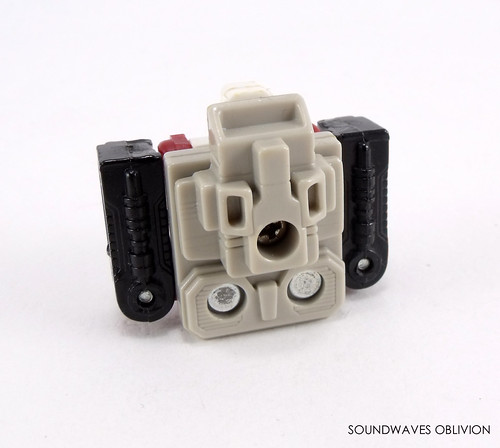 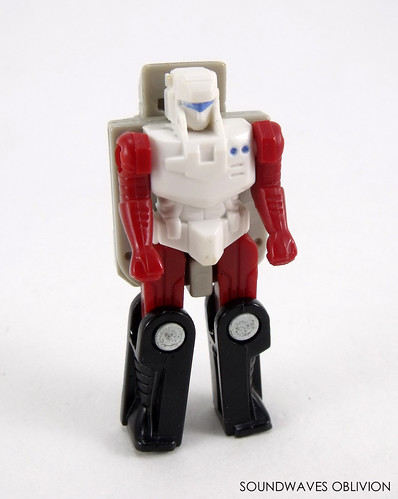 Transformation of the cab mode to robot mode is similar to the 1984 version however you need the Powermaster engine plugged in to unlock the legs to fold them down. The back of the cab is split apart to transform the arms revealing the faux window chest then the robot head is folded up. The robot mode is heavily influenced on the animation model of Optimus Prime. The false windows and grill of the robot mode allow for the angled chest of the animation model and this works quite well. The robot mode sports red eyes which are changed to blue for the reissue. 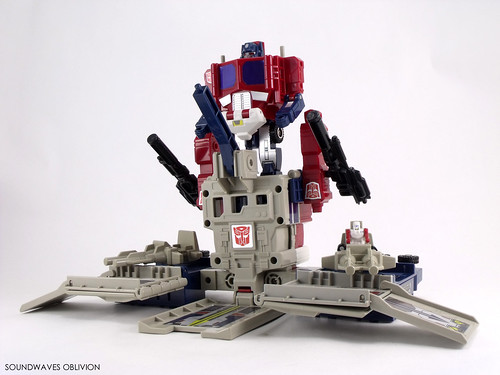 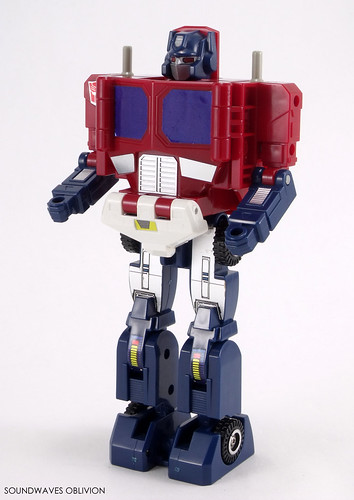 Unfortunately the robot mode has less articulation than the original 1984 version as the only moving parts are the arms at the elbows and that's only there for the transformation. Hi-Q is identical to the other Powermaster engine figures with a basic transformation. When in engine mode the legs are folded down at the knees and when in "robot" mode the arms can rotate forwards at the shoulders. 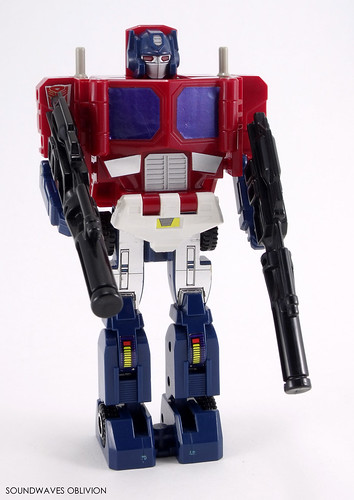 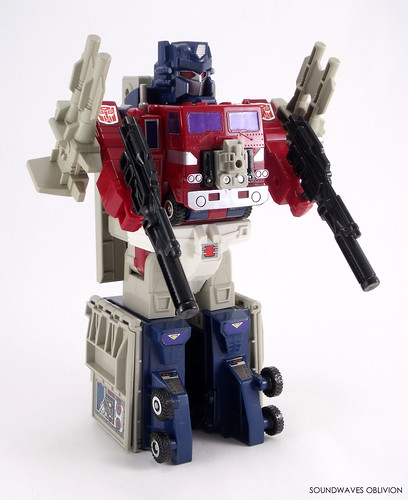 Much like the original 1984 trailer, this version can also transform into a command base. The grey cannons are also a seat that you can attach Hi-Q onto which is a great feature. 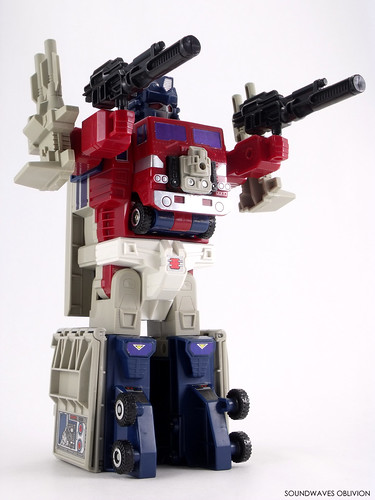 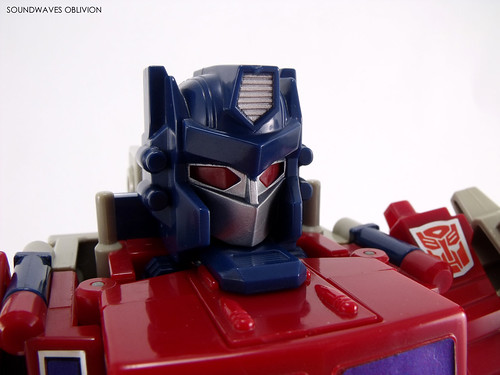 The main selling point of this figure is the large robot mode formed from the combination of the cab and trailer. The transformation is simple and the larger robot mode head is an extra accessory which plugs in to the top of the cab mode. The robot mode without the weapons attached looks particularly bare so I prefer the heavily armoured look. Although the robot mode is a brick is still looks great and particularly stands out on the artwork which features on the 1988 Transformers. The "recent" (2016) Powermaster Optimus Prime is a great update of the figure but lacks the smaller robot mode.
Posted by Jeremy Barlow at 20:25