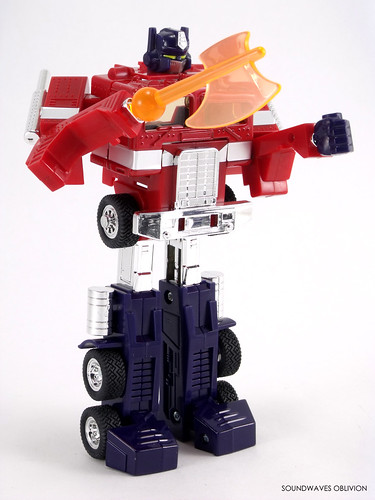 Collection 0
01 Cybertron General Commander Convoy
Function: General Commander (Cybertron Leader)
Transformation: Trailer
Ability: Can separate into 3 powerful machines. Commander Convoy is incredibly powerful and armed with a laser rifle. Buggy can undertake espionage activities up to 2000 km away. The Combat Container houses communication equipment and a cannon.
Character: His greatest strength is his intelligence. He has charged himself with the mission to protect Earth and the human race.
STR…10; INT...10; SPD...8; END...10; RNK...10; CRG...10; FPR...8; SKL...10; TTL...76 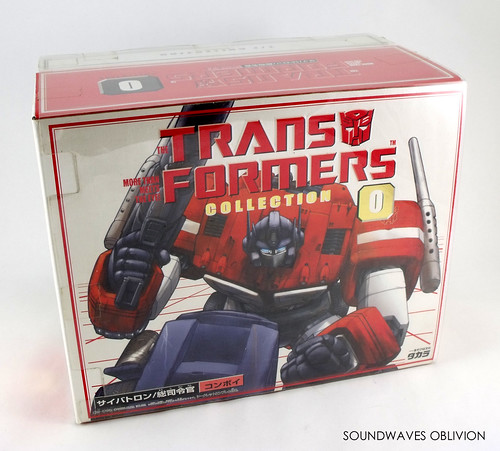 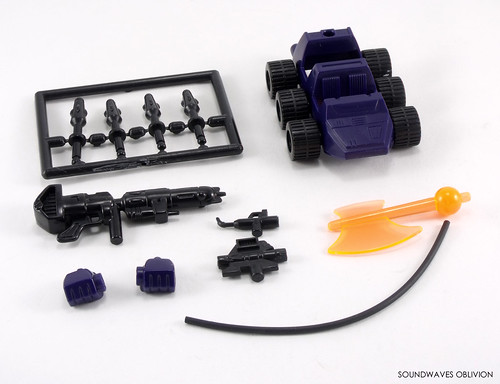 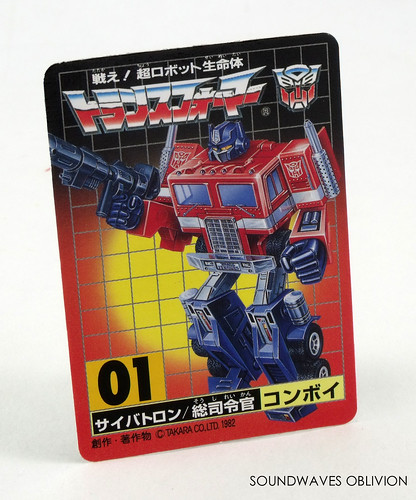 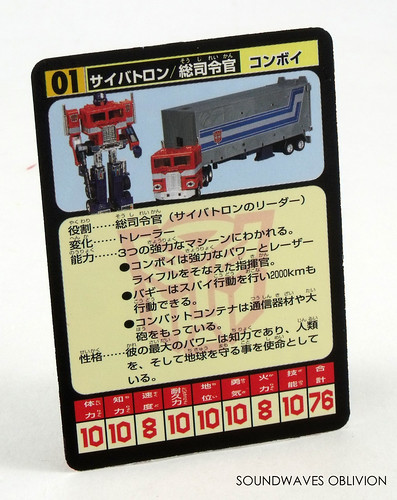 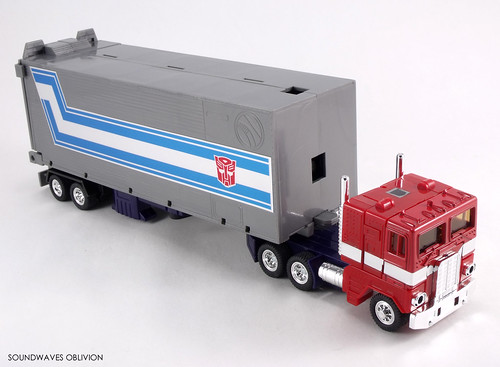 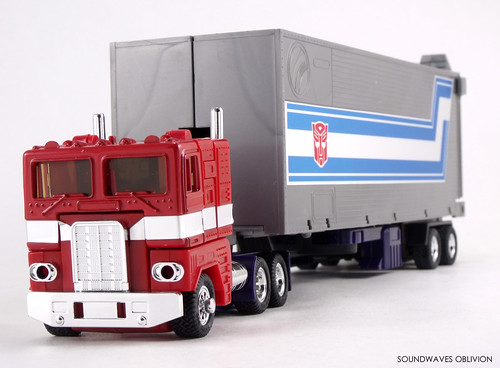 Convoy (Optimus Prime) saw a number of reissues following the Transformers 15th Anniversary reissue in 2000, the Convoy (Special Edition) in 2002 and Hasbro's Commemorative Series Optimus Prime in 2002. Therefore in order to release Convoy yet again within the Transformers Collection Series, Takara released it with a few extras to tempt collectors to make another purchase. Collection #00 Convoy was released in March 2003 for 6,500 Yen. 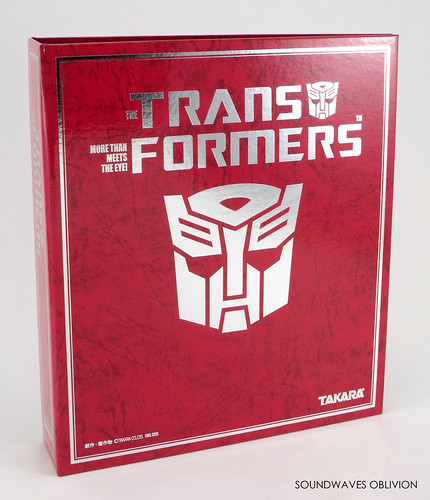 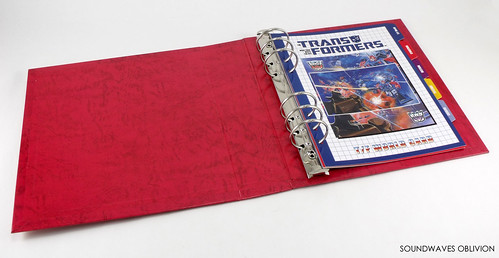 The Transformers Collection Convoy figure itself is a mixture of the earlier Japanese only reissues, with the standard cab and trailer of the 15th Anniversary reissue and the blue roller of the Special Edition version. 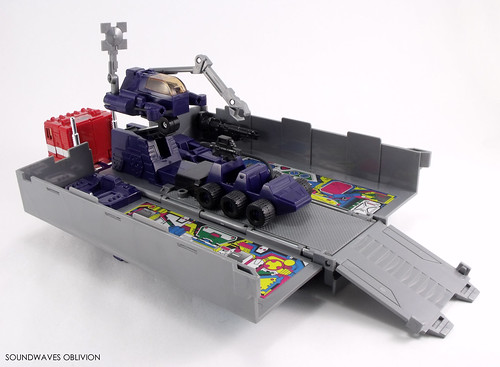 The Transformers Collection version came with the "fat" Diaclone / early 1984 Optimus Prime gun (this gun also came with the VSX 01 Convoy) which had been reissued the previous year with "Convoy (Special Edition)" as well as a brand new accessory, the "Energy Axe", a weapon which would be released with many more Convoy / Optimus Prime figures. 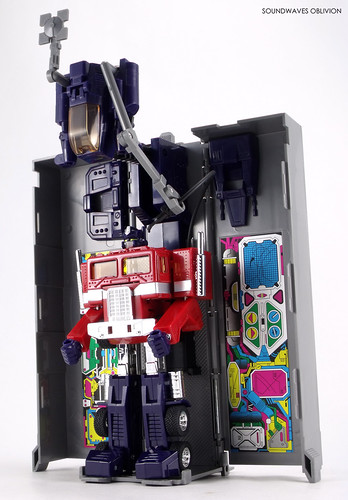 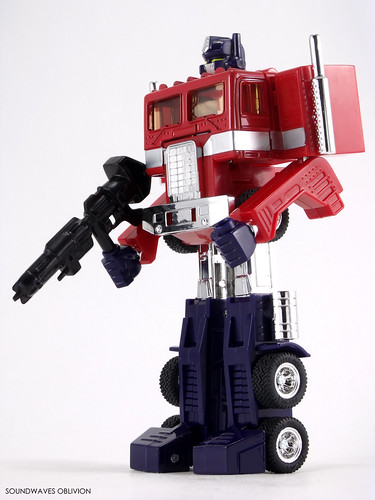 Overall this is a decent reissue with a few extra special features. The most recent reissue (the 2020 Walmart exclusive) is far superior to the 2003 reissue as it uses a brand new mould and the mould degradation is noticeable when you compare the two together; still the plastic quality on the 2003 version feels much stronger. 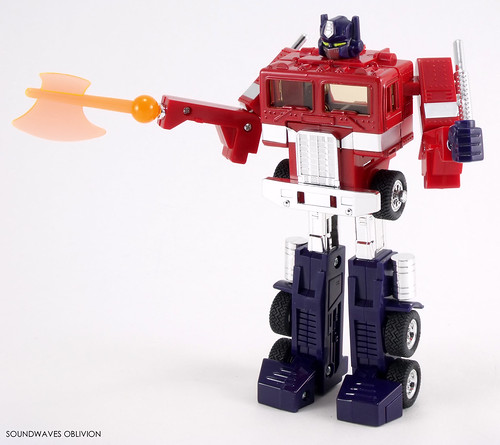 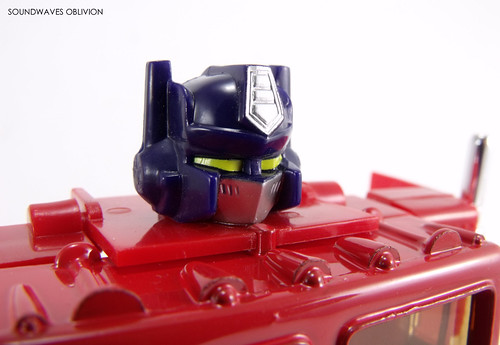 Convoy's own data file came with Meister but Convoy came with Adams (Cosmos) and Laserwave (Shockwave). 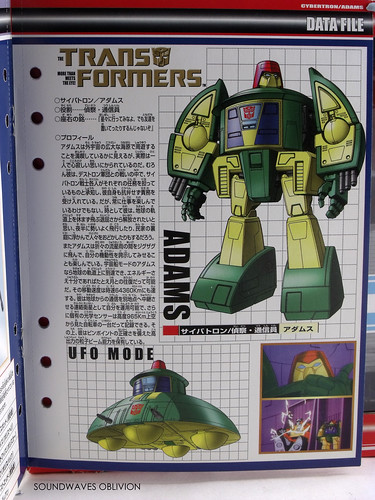 ○ Cybertron / Adams
○ Function: Reconnaissance / Correspondent
○ Motto: “Reach for the stars, but never leave your friends.”
○ Profile:
Adams appears to enjoy exploring the vast gulfs of outer space but in reality he is lonely. Of course, he understands that every Cybertron has a job to do in the battle against the Destrons, and he accepts his without argument. But he's not always happy about it. Sometimes, to relieve the boredom of a long vigil orbiting the Earth, he'll zip down at night and scare a few humans by hovering over their backyards. Adams also delights in showing off his manoeuvrability by zig-zagging through an occasional meteor shower. As a spacecraft, Adams can achieve Earth orbit and, with enough fuel, he can make a round trip to the moon. He can reach speeds of 64,360 km/h. He can use himself as a communications satellite by bouncing signals from one Earth location to another. His unique optical sensors can see and record objects as small as a bicycle from an altitude of 965 km. He has a high-powered particle beam capability that he can use with pinpoint accuracy. 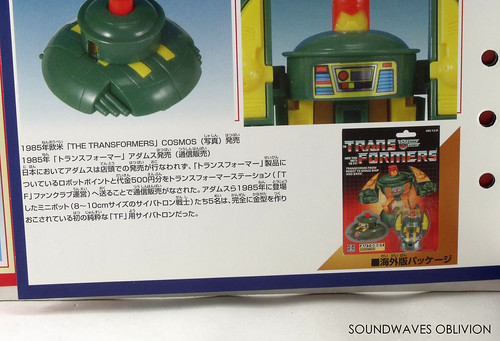 -Western release 1985 “The Transformers” Cosmos
-Released 1985 “Transformers” Adams (Mail Order)
Adams was not sold at stores in Japan, instead it was only available via mail order by sending off the robot points which were attached to “Transformers” products as well as 500 Yen to the Transformer Station (Transformer Fan Club). The five Minibots (8 to 10cm Cybertron Warriors) who appeared in 1985, such as Adams, were the first pure “Transformer” Cybertrons with brand new moulds. 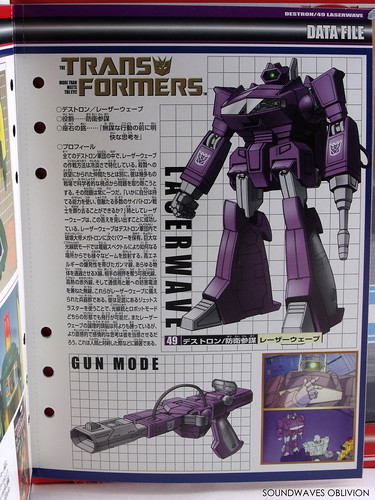 ○ Destron / Laserwave
○ Function: Military Operations
○ Motto: “Clarity of thought before rashness of action.”
○ Profile:
Of all the Decepticons, Laserwave's method of operation is most characterized by cold, brutal efficiency. He enters every battle not with the bloodlust of his comrades, but with a scientist's approach to solving a problem. The problem is always the same. “How can I most effectively use my abilities to eliminate the greatest number of my enemies, the Cybertrons?” All too often he finds the answer. Among the Decstrons, Laserwave's power is second only to Megatrons. His giant ray-gun mode emits a wide variety of beams from the electromagnetic spectrum. High-energy explosive gamma rays, x-rays that allow him to see through almost anything, blinding visible light, super-hot infrared rays and radio waves that can either send messages or jam other radio signals are but a few of the weapons in Laserwave's arsenal. He can fly in both ray gun and robot modes using powerful jet thrusters in the soles of his feet. Although his logical brain center is usually an advantage, more intuitive and emotional thinking processes often confound him. This is mainly demonstrated when he is against human adversaries. 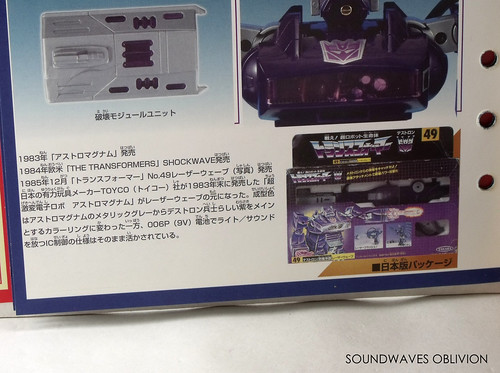 -Released 1983 “Astro Magnum”
-Western release in 1984 “The Transformers” Shockwave
-Released December 1985 “Transformers” No.49 Laserwave
The origins of Laserwave stemmed from the “Super Radical Change Robo Astro Magnum” which was released near the end of 1983 by Japanese leading toy manufacturer, TOYCO. While the mould colour was changed from the metallic grey of Astro Magnum to purple matching the Destron colours, the IC control specifications which emit light and sound with a 006P (9V) battery remained identical.
Posted by Jeremy Barlow at 07:03