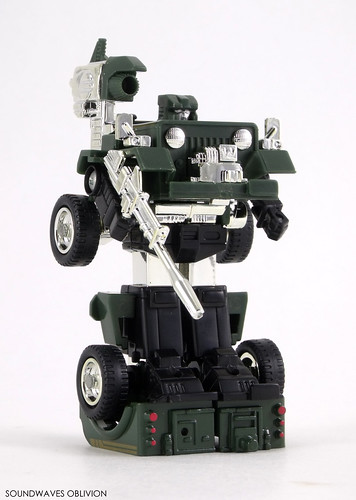 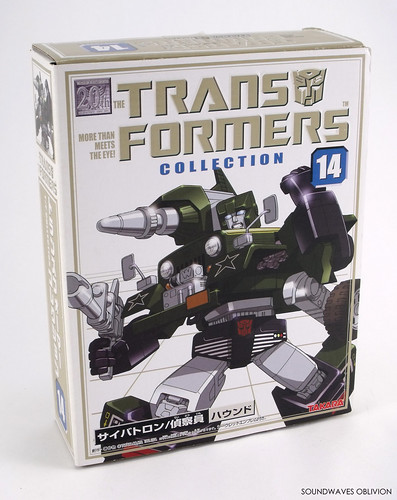 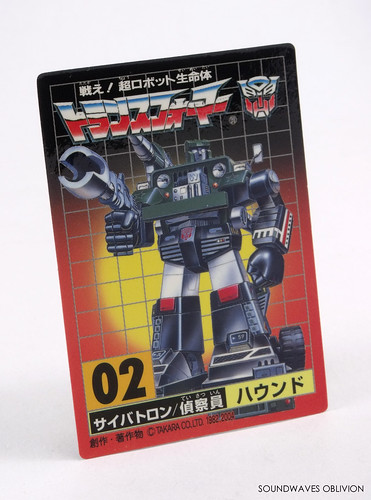 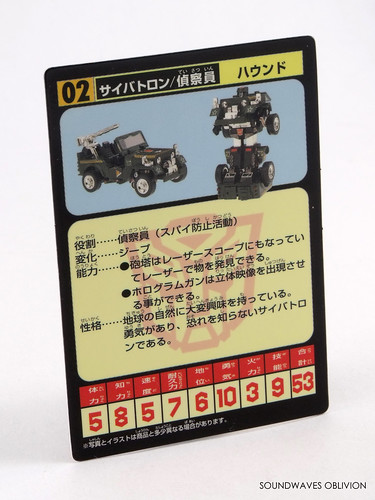 Transformers Collection #14 Hound was a welcome reissue and marks the only occasion Hound has been reissued at the time of writing (released in July 2004 for 3,000 Yen). Hound was originally released in the Diaclone toy line as Car Robot No.12 J59 Jeep which was released in June 1983. 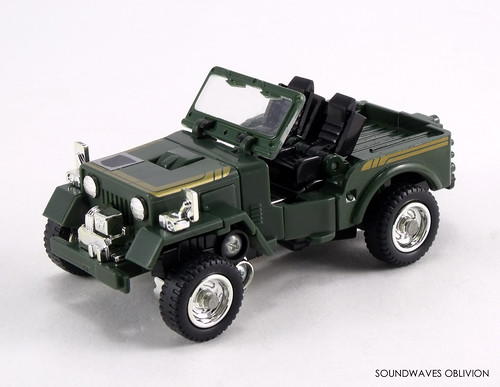 Interestingly the J59 Jeeps were built by Mitsubishi and were based and licensed on the Willys Jeep CJ-3B. It is the Willys Jeep that the more recent Masterpiece MP-47 Hound is based on. 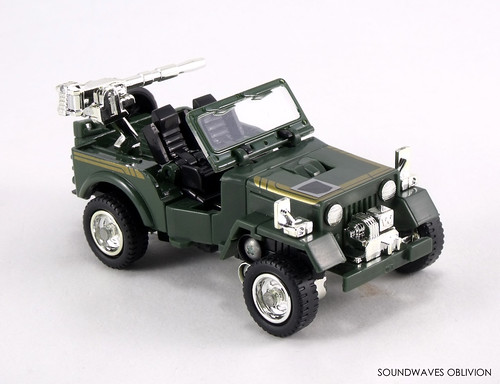 Hound is one of the smaller Autobot cars but makes up for it with the number of accessories he comes with which include a missile launcher, x3 missiles, turret gun, hologram gun, fuel can and a spare tire. Both the fuel can and spare tire don't have any function other than act as decoration for the vehicle mode so are a nice touch. The turret gun plugs in the rear of the jeep mode and can move 360o and the barrel can mode up and down although this movement is limited. Like most of the Transformer Collection reissues, Hound features gold stripes tampographed on his body instead of stickers like the original version. 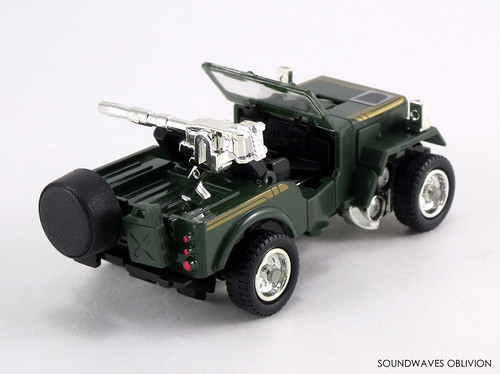 Despite his small size, Hound has a simple yet great transformation. The car seats fold up to become the back of Hounds feet, when you rotate the front of the jeep forward to form the upper body, the robot head automatically pops up. When you rotate the front wheels backwards, the shoulders will automatically slide outwards then you can fold the arms down. These "automatic" transformations are very similar to the "Automorph" features of the 2007 Movie figures. 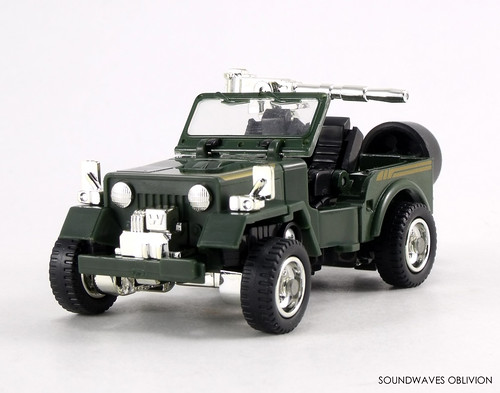 Just like his vehicle mode, Hound is also small in robot mode and admittedly his proportions are rather off. His head is rather small as are his arms and his feet are on the large side. The proportions have never bothered me in the slightest. Attaching Hounds weapons completes his overall look; the missile launcher slots onto either of his shoulders and he carries a rather long handgun which is his hologram gun. In the animated series Hounds handgun is much shorter and in turn the Masterpiece MP-47 version also copied the smaller gun. 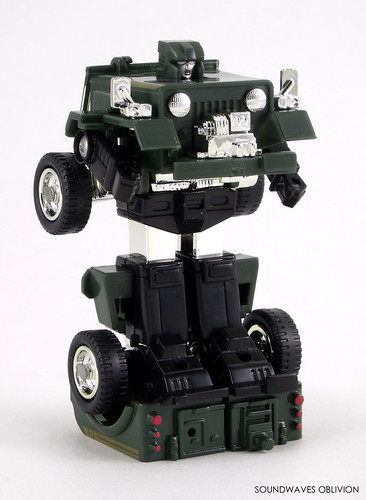 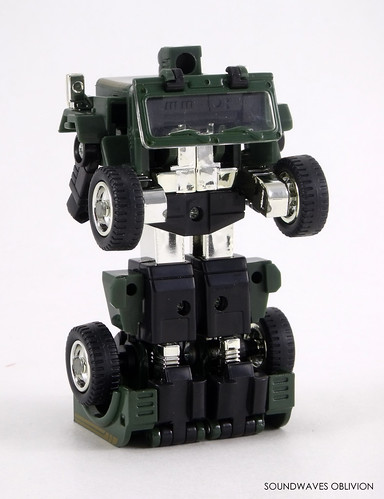 Overall this is a great release and worth picking up if you want a Hound in decent condition. Many of the early Hounds are hard to find in decent condition. One issue I've found with my reissue is that the chrome now has a gold tint to it (much like my Car Robots D-012 Black Convoy's trailer). I'm not sure whether that is an issue for all of the Transformer Collection versions or just a batch mine was a part of? 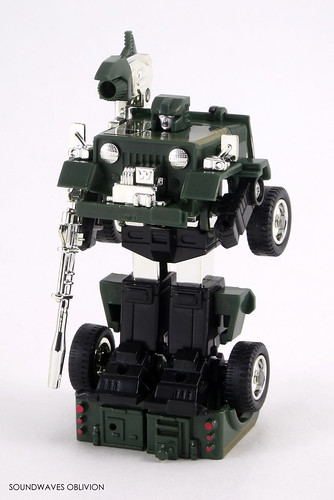 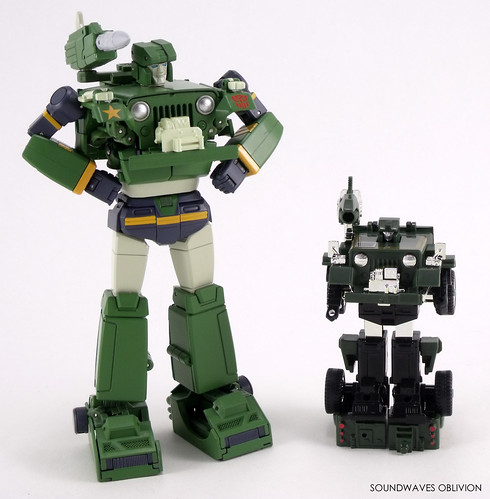 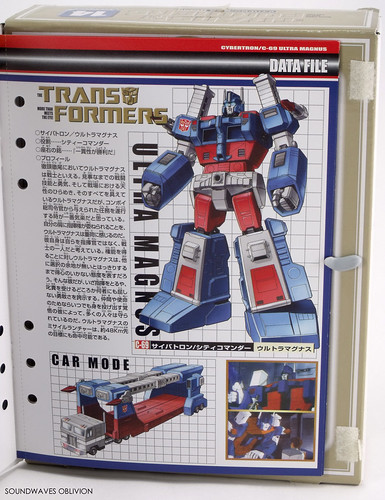 ○ Cybertron Ultra Magnus
○ Function: City Commander
○ Motto: “Consistency is victory.”
○ Profile:
Ultra Magnus is all soldier. He is most comfortable when he is carrying out Optimus Prime's orders - giving it all of his magnificent fighting skills, courage and gift for battlefield improvisation. He feels uncomfortable when the mantle of leadership is placed over his broad shoulders. He sees himself as one of the warriors, not a commander. He will show reluctance to assume authority until it is clear that he has no choice but to lead. When he takes command, he is resolute, fair and courageous beyond reproach. He is ever-ready to sacrifice himself for the good of his companions and mission, and unstinting in his preparedness so that his "people" will be as protected as possible. Ultra Magnus carries missile launchers capable of hitting a target 48k away. 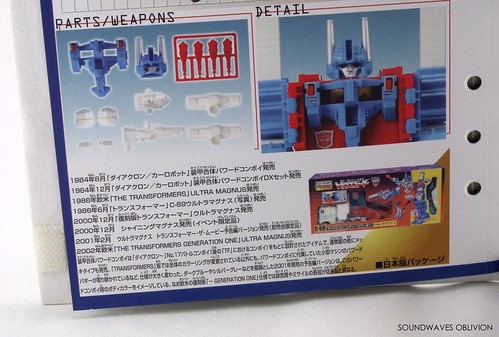 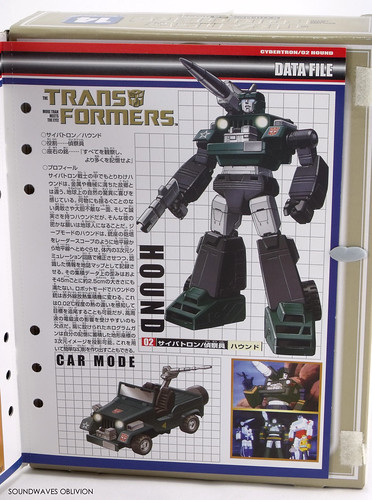 ○ Cybertron Hound
○ Function: Scout
○ Motto: “Observe everything, remember even more.”
○ Profile:
Of all the Cybertron warriors, Hound finds the natural wonders of Earth endlessly fascinating, unlike his home planet, which is entirely composed of metal and machinery. Hound has unwavering bravery, fearlessness, and loyalty, but his secret desire is to be human. While in his jeep mode, Hound uses his turret gun to sweep over the landscape from horizon to horizon, like a radar scope, and, with the help of internal 3-dimensional simulation circuitry, stores this information as a topographical map. Error distortion is no more than 2.5cm per 45m distance from point of data collection. In robot mode, Hound's turret gun becomes an infrared radiation collector. It can detect heat differentials as small as 0.02oC, however it can be affected by high-frequency electromagnetic waves. His shoulder-mounted hologram gun can project 3-dimensional grid laser light images of terrain maps stored in his memory. He sometimes also can use it to cast simple illusions. 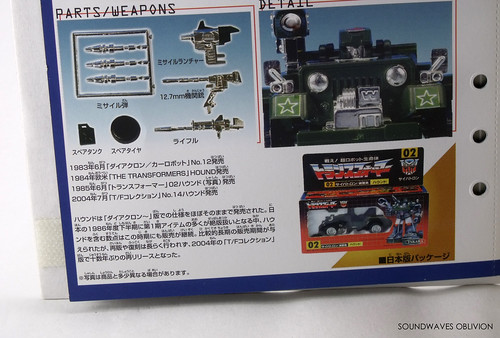 - Released June 1983 “Diaclone / Car Robot” No.12
- Western release in 1984 “The Transformers” Hound
- Released June 1985 “Transformers” 02 Hound
- Released July 2004 “Transformers Collection” No.14 Hound
Hound was released virtually identical to the original Diaclone version. While many of the first run of Transformers were phased out in 1986, several figures including Hound continued to be sold during this period. Although initially being made available for sale for a long period, Hound had not been reissued since and the “Transformers Collection” version released in 2004 marks the first time Hound has been available in over 10 years.
Posted by Jeremy Barlow at 19:35