Gigawatt (Back to the Future x Transformers, 2020) 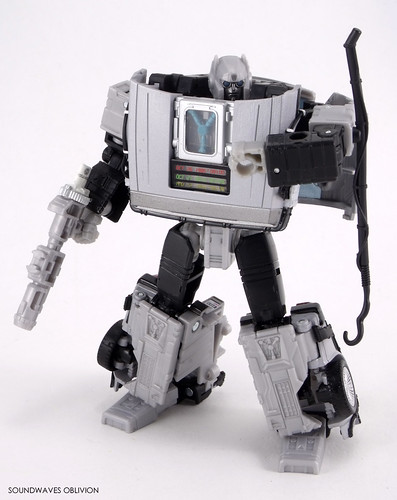 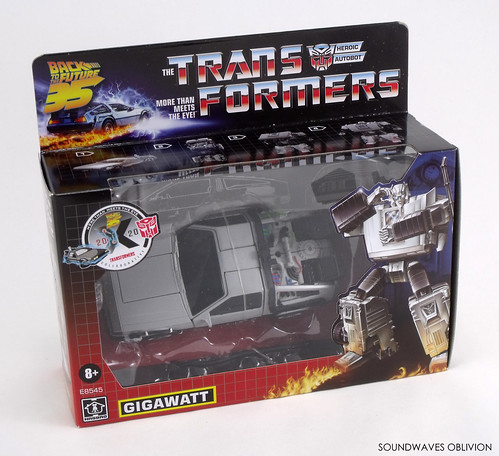 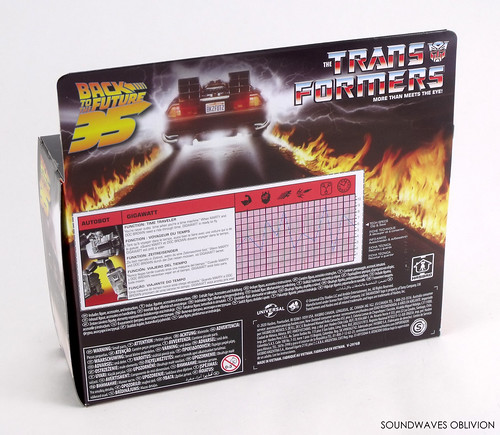 Following Ectotron's release in 2019, Hasbro's next 1980's film collaboration was with the "Back to the Future" movie trilogy. In keeping with the theme of the 80's, Gigawatt comes packaged in a Generation One styled box complete with box art replicating the 1985 poster of Marty (Michael J Fox) lifting up his sunglasses and checking his watch. On the rear of the box in a G1 styled tech spec but unfortunately lt's very short to accommodate multiple languages. 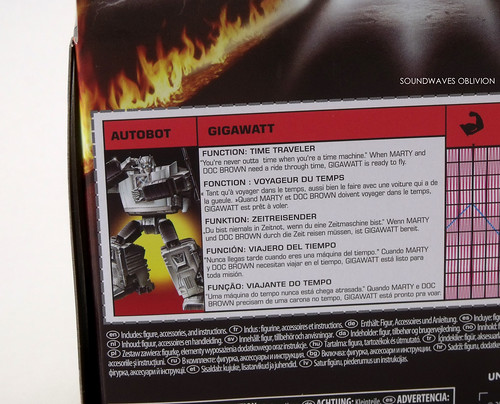 The name Gigawatt is an actual unit of power (1 gigawatt is equal to 1 billion watts) is pronounced as Jigowatt in the movies so as the Gigawatt Transformer comes from this universe I'd take a guess the pronunciation is the same. In the first movie 1.21 Gigawatts of power was needed to power the Flux Capacitor element of the DeLorean. 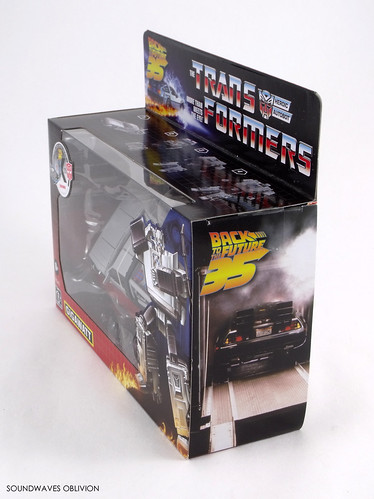 A nice touch to the box is the right hand side of the box has a photograph of the DeLorean and the box flap folds down rather than outwards just like the ramp of the truck when it was first revealed in the 1985 movie. 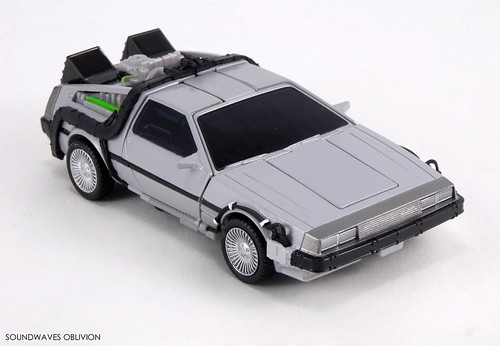 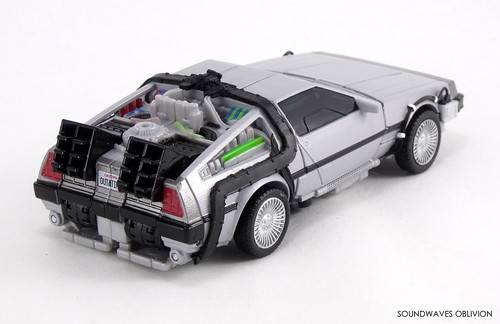 Gigawatt is packaged in his vehicle mode which like Ectrotron is the main selling point of this figure. Gigawatt is a DMC DeLorean where the DMC part stands for "DeLorean Motor Company". This was a sports car sold between 1981 and 1983 with unique gull winged doors. It was this iconic look that attracted the filmmakers to use the car. 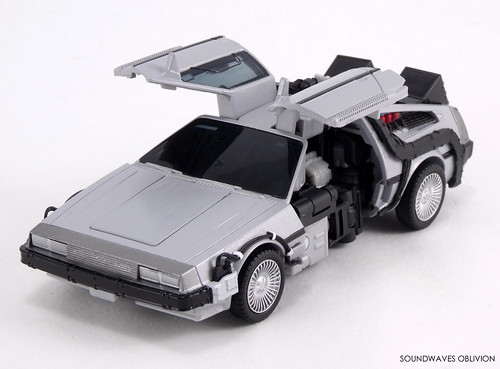 Gigawatt is a heavy resculpt of the 2018 Sideswipe from Transformers Siege which works quite well as a DeLorean. The car mode is very detailed for a Deluxe sized figure with brushed silver paint, thrusters, painted wires at the rear and a California "OUTATIME" number plate as seen in the film. The initial photographs of Gigawatt had clear windows showing an unsightly "interior", luckily for the final release the windscreen was darkened. Just as you'd expect to see with a DeLorean vehicle, the doors do open upwards just like the real car, though this is also part of the transformation. 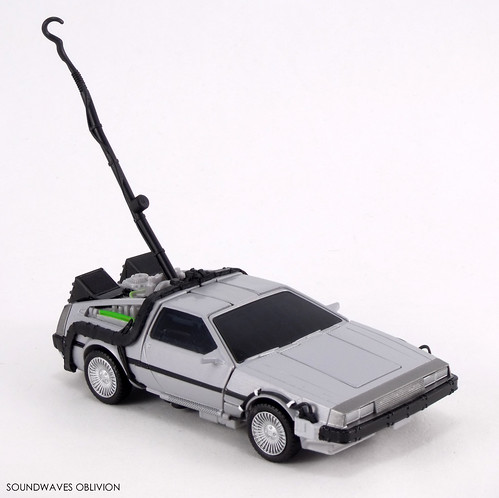 A lightening rod comes with the figure which can attach to the rear of the vehicle to replicate the scene where Doc Brown and Marty use it to harness 1.21 Gigawatts of power from the lightening that struck the clock tower to send Marty back to the future. 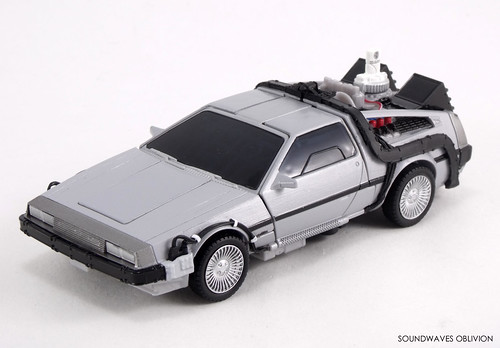 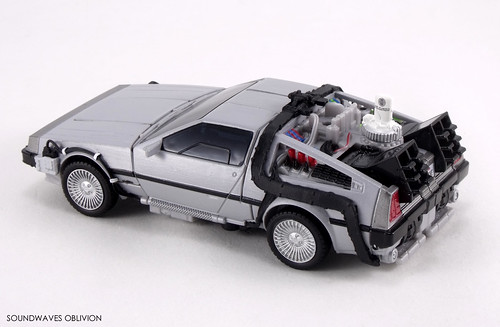 Gigawatt can also turn into the flying DeLorean as seen in the end of the first movie as well as "Back to the Future Part II". Another accessory is the "Mr Fusion", the replacement power source for the DeLorean. Unfortunately this does not peg in very well and the slightest movement makes it fall off, at least it does on my copy. All four wheels fold underneath the car for the "flying" mode. 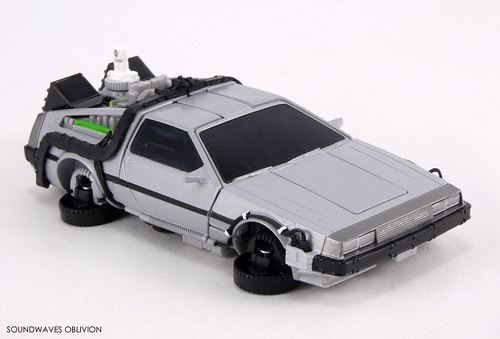 The final accessory, the handgun which looks very similar to Optimus Primes Ion Cannon is not used in vehicle mode but can store underneath the car. 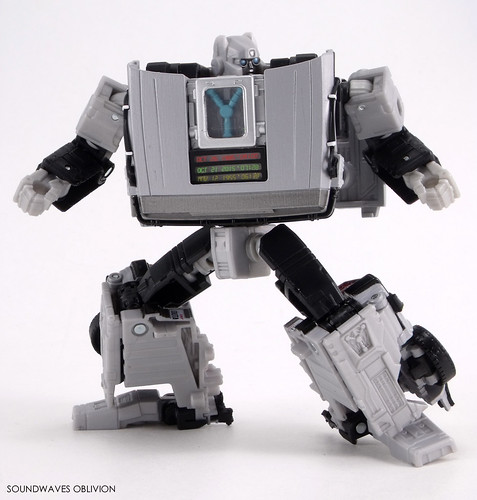 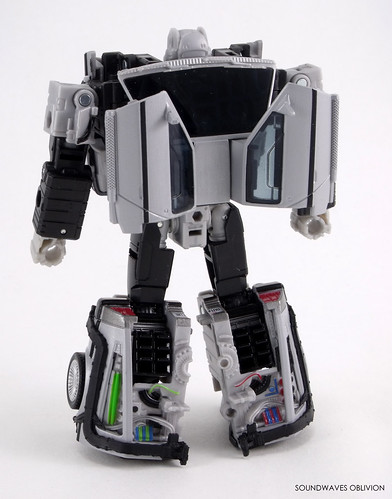 Although this is a heavy retool of Siege Sideswipe, Gigawatt does share a very similar transformation. Whereas the vehicle mode is great, the robot mode is not as impressive and its a shame the lower half of the body isn't painted up a bit more. Although the headsculpt is new, it does bear a resemblance with Sideswipe. A nice touch are the goggles as worn by Doc Brown in 1955 from the first film. Another positive for the robot mode is the chest. Although the whole torso of Gigawatt is the bonnet of the car, the centre flips around during transformation revealing the Flux Capacitor and the three dates and times from the first film. The shape of the Flux Capacitor is also sculpted on Gigawatts knees which is a nice touch. 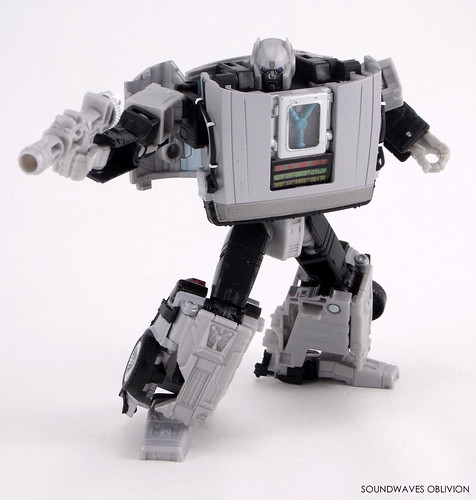 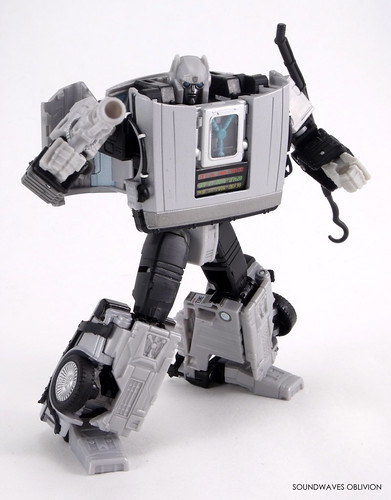 Overall this is a great and inexpensive figure and is well worth picking up especially if you are a fan of the Back to the Future trilogy. Vehicle mode is the main selling point but I just wish the robot mode had a bit more paintwork. 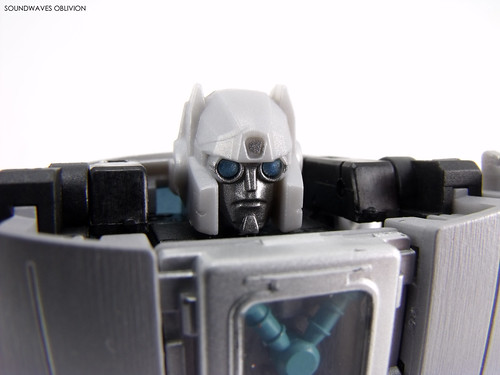