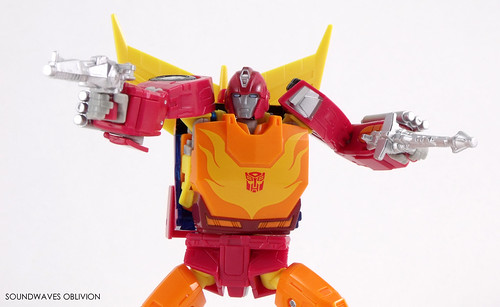 Autobot Hot Rod (Translated from SS-60 Hot Rod)
This youthful Autobot warrior transforms into a supercar. He enjoyed a short-lived peace on Earth with his young friend Daniel until the Decepticons launched their attack on the Autobot base. Guided by the Autobots Matrix of leadership, his many adventures saw him grow into the leader he was destined to be. 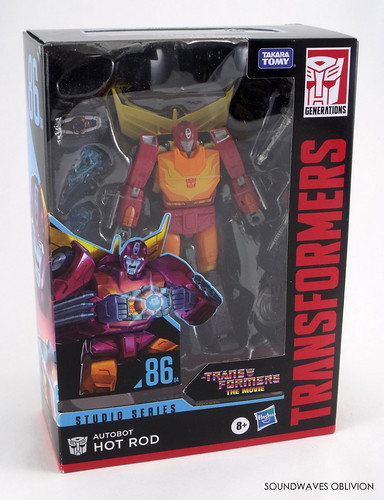 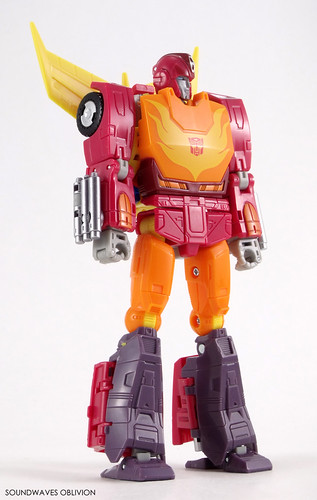 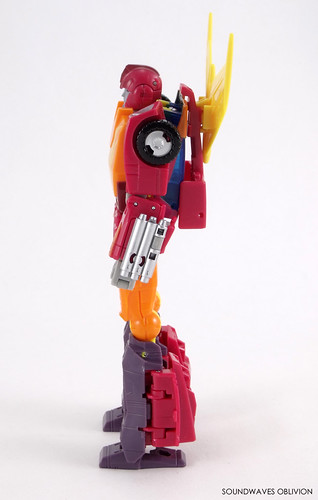 The Studio Series line began in 2018 focusing on the characters from the live action films. The figures released payed attention to screen accuracy and scale of the characters and has generally been well received. In 2020 however there has been a slight shift in focus with the inclusion of characters from the 1986 animated movie.
One of the early reveals was Hot Rod whose impressive robot mode caught the attention of many fans. Hot Rod comes packaged in robot mode and looks as if he walked straight out the movie. Hot Rod has a streamlined and well proportioned robot mode and does not have any vehicle mode kibble hanging off him. In comparison to the much more expensive 2016 Masterpiece MP-28 Hot Rodimus, this figure is by far more superior, in robot mode at least. In order to pull this off the figure features a "fake" bonnet chest which doesn't really bother me. 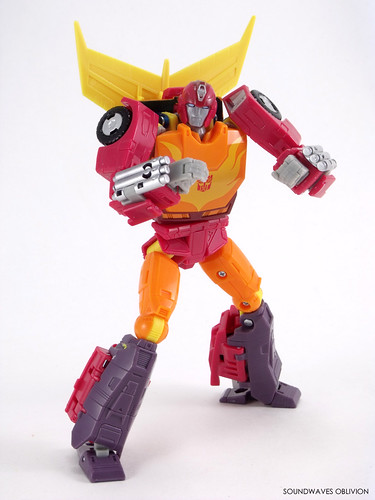 One of the main criticisms of this figure is the size. Hot Rod is a Voyager Class figure although he is a Deluxe sized figure and this is because of the complicated transformation. To compensate for this Hasbro have included several accessories including the two guns, the Matrix, a saw, two blast effects and the Matrix glow effect. 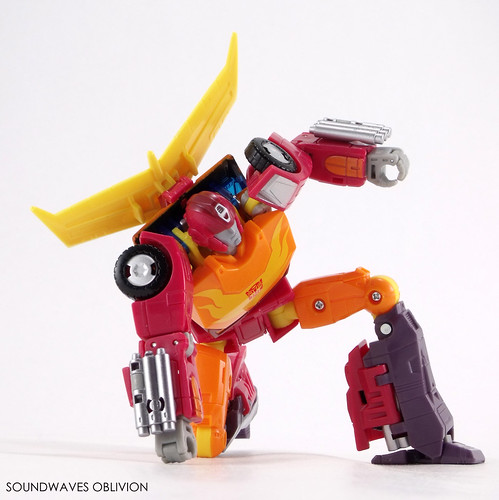 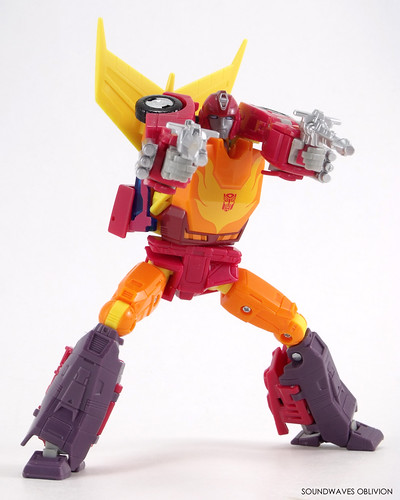 Hot Rod has excellent articulation and the additional accessories work very well with the figure. As with previous Hot Rod figures, the top of his head flips up allowing you to flip down his blue visor. You can also add the blast effects to the exhausts on his arms to recreate the scene from the movie where Hot Rod attacks the compromised Autobot shuttle. 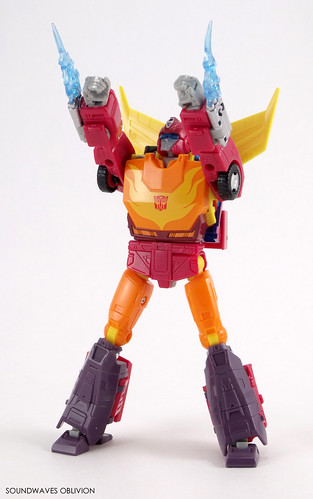 Hot Rod's saw blade attaches to his right wrist which he used to protect Kup from the mechanical squid on planet Quintessa and his right fist rotates to reveal the welder he uses to fix Kup. Another nice detail are the fists as the fingers are hinged. This detail is useful for holding the Matrix to recreate the iconic pose when he becomes Rodimus Prime. 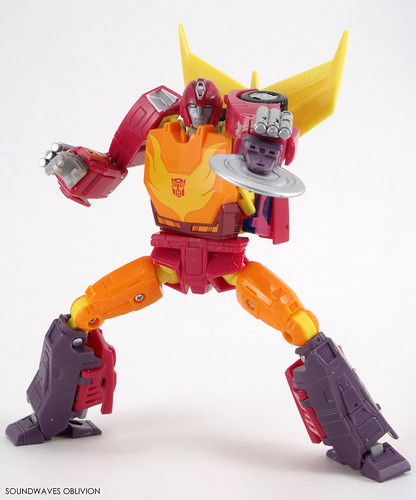 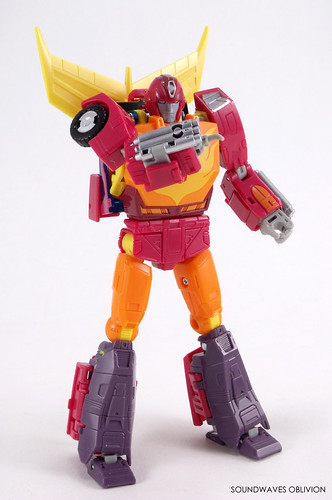 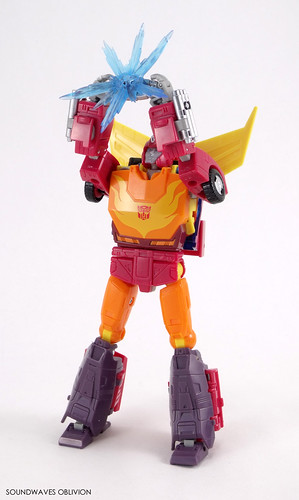 The car mode is where this figure doesn't quite get it right. It looks like it's a car mode based on Hot Rod rather than recreating the actual car model. The MP-28 car mode is excellent and arguably the best one we've gotten and it's a shame the Studio Series version didn't quite pull it off. Additionally my car mode doesn't quite hold together that well at the front of the car. I've seen the Takara Tomy versions holding together much better do it could just be my copy. When I got this figure I had to trim off some plastic flashing from the shoulder joint as well otherwise the car mode wouldn't have held together very well at all. Looking at the car mode from the rear destroys the illusion as well but it's to be expected at this price point. 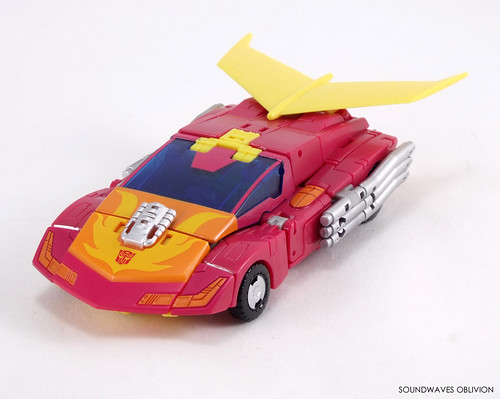 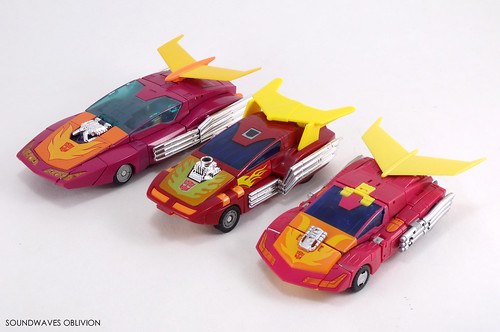 In car mode you can add the blast effects to the rear exhausts as well as attach the guns to the exposed engine or car roof. You can even attach the saw blade on top of the guns for a very odd look. 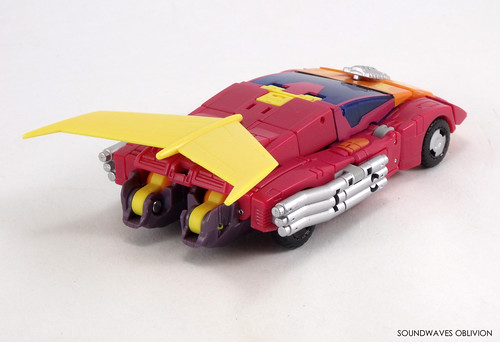 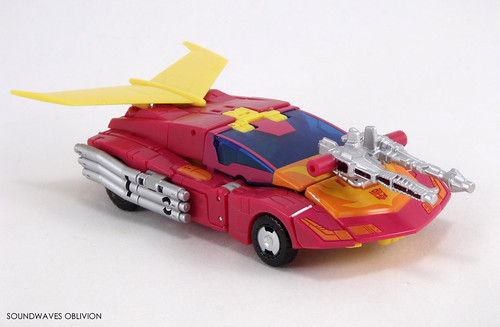 Overall this is a fantastic figure and is possibly the best Hot Rod figure released. The Studio Series has the best robot mode and the Masterpiece has the best vehicle mode, hopefully one day we will see one figure which combines the two. MP-9 Rodimus Convoy comes close but unfortunately it is not an enjoyable figure. 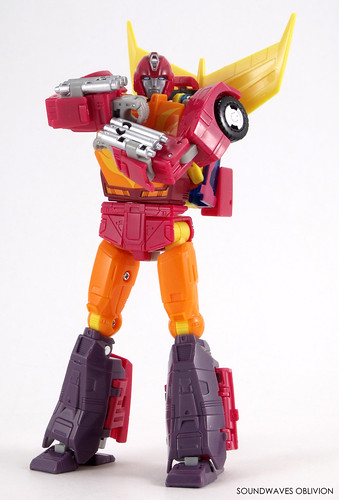