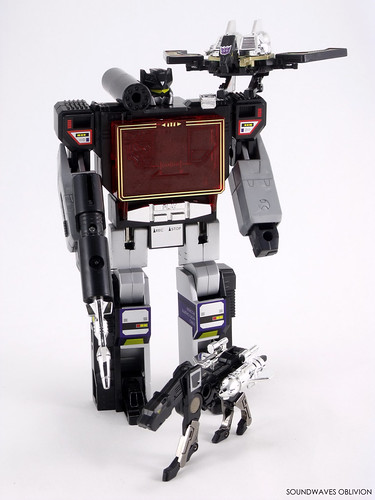 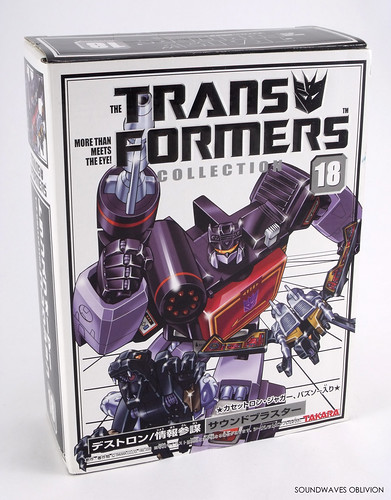 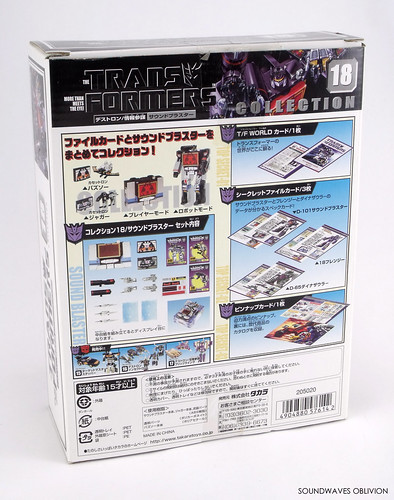 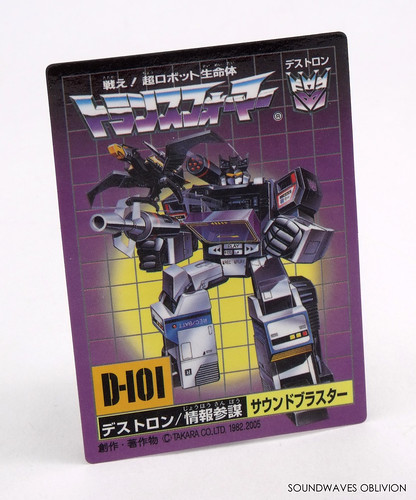 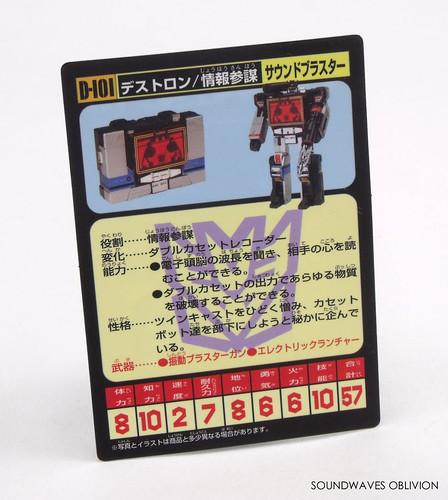 In the 1987 Transformers Headmasters animated series, it was the second episode "The Mystery of Planet Master" that saw both the death of Broadcast (Blaster) and Soundwave. In the fourth episode, "The Great Cassette Operation", both Broadcast and Soundwave were revived as Twincast and Soundblaster respectively. 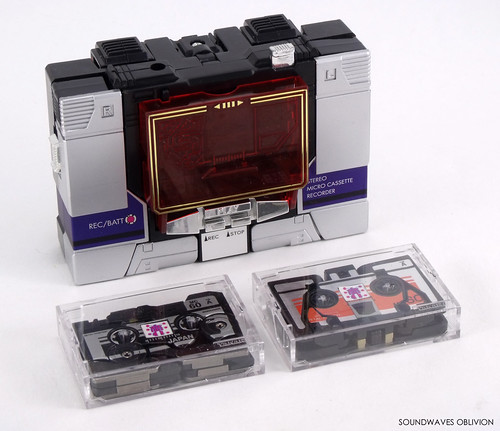 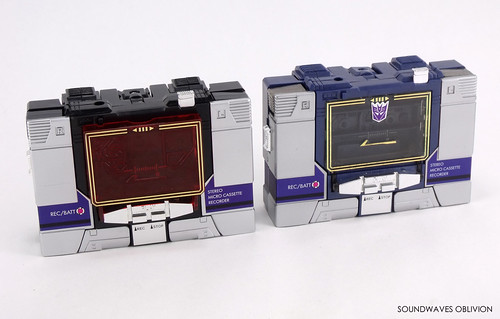 Soundblaster had for a long time been one of my must have Transformers and in 2005 Takara finally reissued him in the Transformers Collection series. Like most of the other reissues in the series this was not a straight re-release, but an improved one. 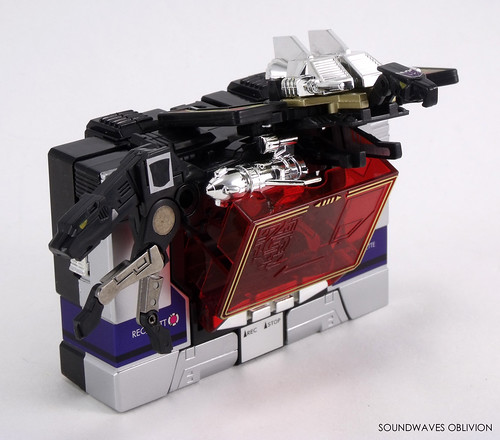 D-101 Soundblaster was originally sold in 1987 for 2,980 Yen and was packaged with D-106 Buzzsaw. Buzzsaw had never been released individually in Japan and was previously only available in the 1986 VSZ giftset alongside Sunstreaker and Skids. This newer version of Buzzsaw was slightly different as instead of a sticker visualising the internal cassette reels, there is a schematic of Fortress Maximus with dots pointing to various sections. When this sticker is viewed behind a transparent red screen (much like the tech spec decoders) Fortress Maximus' weak point is revealed. This weak point seems to be random with the original releases. 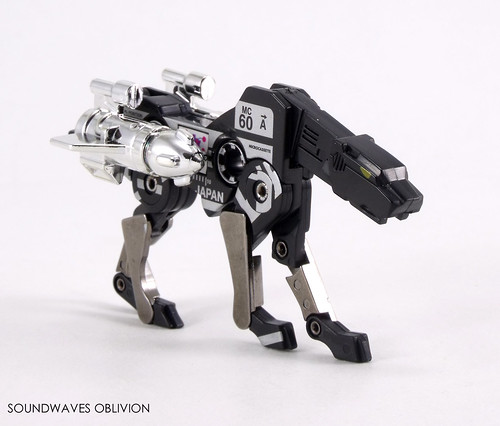 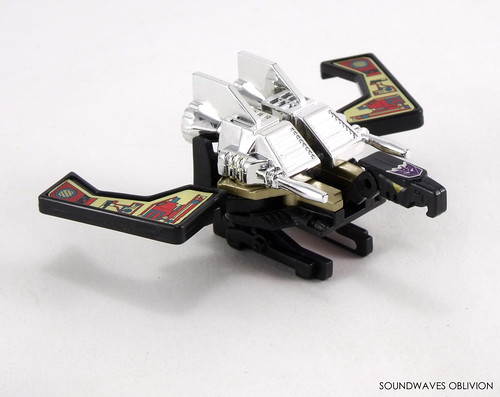 Soundblaster was a straight black repaint of Soundwave but the cassette door was remoulded to hold a cassette therefore Soundblaster could store two cassettes simultaneously. The cassette door was also made of transparent red plastic so when Buzzsaw was inserted the weak point of Fortress Maximus was shown. Despite being able to store two cassettes, Soundblaster only came with the one cassette which is something that the 2005 reissue improved upon. The sicker sheet Soundblaster came with was identical to the sticker sheet that came with Takara's Soundwave. It was nearly identical to Hasbro's version but it came with an additional Destron sticker.


The 2005 reissue of Soundblaster is near identical to the original however the set also comes with Jaguar as well as Buzzsaw. Buzzsaw's sticker schematic shows Fortress Maximus's weak point marked as the top left hand side of his chest. Jaguars sticker shows a weak point on Fortress Maximus' right leg. This weak point is identical throughout the reissues. Jaguar was supposed to have been released in 1987 with the designation D-104 but this release was cancelled. Jaguar's reissue comes with his original #19 designation instead of using D-104 which I think was a missed opportunity seeing as Takara reinstated cancelled designation numbers for Hot Rodimus and Chear. 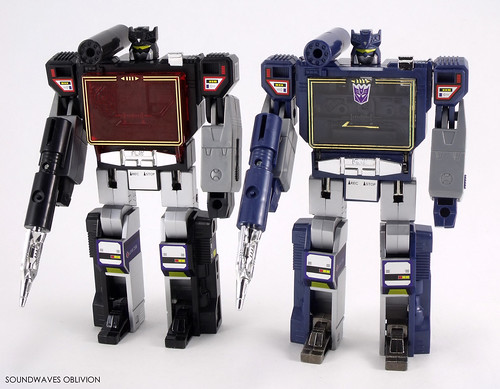 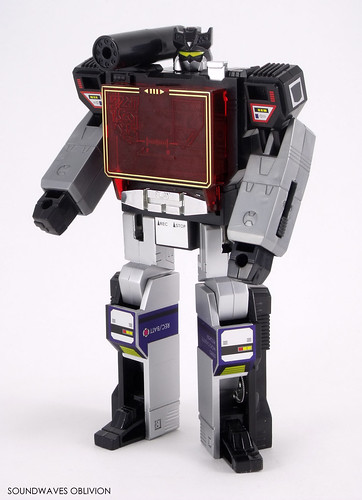 Soundblaster also comes with the same sticker sheet that came with the 2003 reissue of Soundwave. Soundblaster would get one more reissue 7 years later in 2012 under the Encore line. This version featured cartoon accurate paint detailing but the moulding is not as sharp as the original reissue. 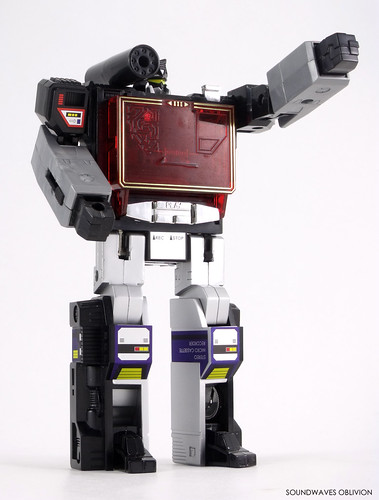 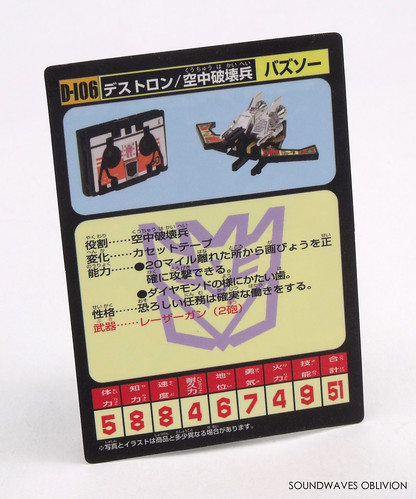 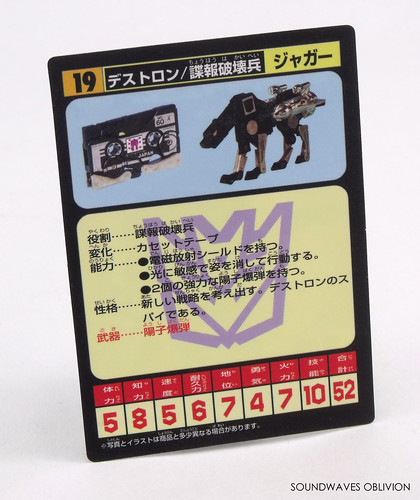 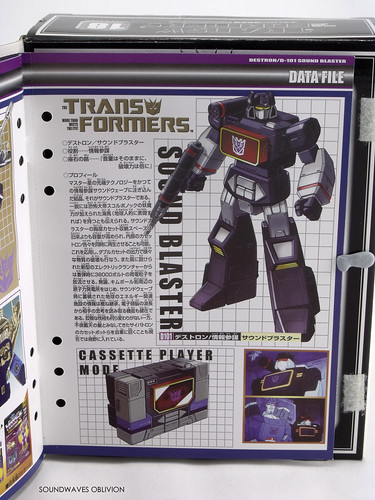 ○ Destron / Soundblaster
○ Function: Chief Information Officer
○ Motto: “Volume intact, destructive power doubled.”
○ Profile
Using Planet Master's advanced technology, the body of Chief Information Officer Soundwave was bombarded with an array of crystals resurrecting him as Soundblaster. One theory suggests that the Emperor of Fear, Scorponok, used a mystical power to give him a cerebral-cortex based on a human’s. Soundblaster’s internal chest storage increased and he can now play each of his internal Cassettrons simultaneously. The increased output of his Double Cassette enables him to destroy a variety of materials. He also has a new Electric Launcher installed on his shoulder which can release charged particles of 38,000 volts. Retaining Soundwave’s memories, he has information of all of Earth's energy generation facilities including nuclear power plants around the Kimuboru district. He has also retained the ability to read minds by monitoring electrical impulses in the brain. While his manipulative personality has not changed, he is now considering inviting the Cybertron Cassettbots (once considered mortal enemies) into his ranks. 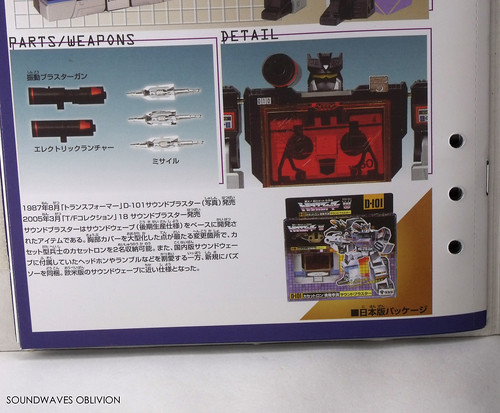 - “Transformers” D-101 Soundblaster released in August 1987
- “Transformers Collection” 18 Soundblaster released in March 2005
Developed late on in production, Soundblaster is based on Soundwave. The biggest change is that the larger chest can now accommodate two Cassettrons. Additionally the headphones and Rumble which came with the domestic release of Soundwave were omitted and Buzzsaw is included instead. This therefore makes the overall specification very similar to the Western release of Soundwave. 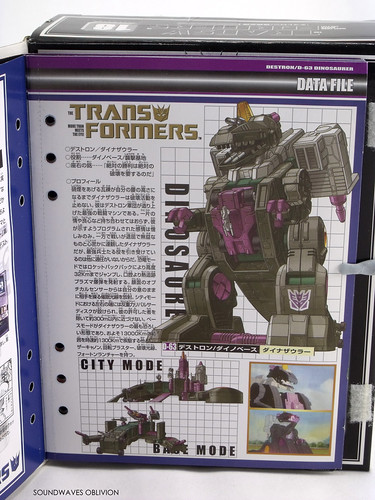 ○ Destron / Dinosaurer
○ Function: Dino Base / Attack Base
○ Motto: "Total victory requires total destruction."
○ Profile:
Dinosaurer doesn't stop blasting away until he's wading hip-deep in smoking rubble. He is the most powerful combat machine built by the Destrons. Without mercy or remorse, the only emotion he is programmed with is hatred. He secretly finds warfare boring and pointless and he only continues as there is no one better to do it but him. In dinosaur mode his rocket backpack lets him jump to an altitude of 32Km and can shoot heat seeking plasma bombs from his mouth. His optical sensors shoot high frequency hypno-beams. Anti-gravity repulsor disks are built in at either side of his city mode which prevents anyone from approaching closer than 300m unless he so chooses. Base mode is Dinosaurer’s most terrifying form, he has a range of 1300Km and can attain speeds of 13000Km/h. He also has a Laser Cannon, Rotating Blaster, Destructo Beams and a Photon Launcher. 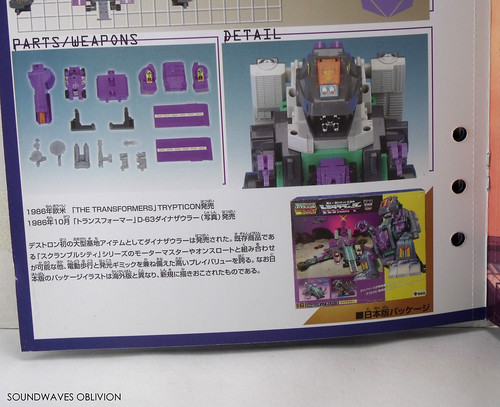 - “The Transformers” Trypticon released in 1986 in North America and Europe
- “Transformers” D-63 Dinosaurer released in October 1986
Dinosaurer was the first Destron base. As well as being able to combine with “Scramble City” products Motormaster and Onslaught, it boasts high play value featuring lights and electronics and is even able to walk. The Japanese box features newly drawn artwork which differs from the overseas release. 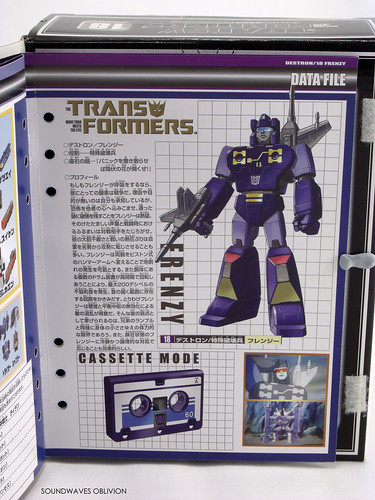 ○ Destron / Frenzy
○ Function: Specialist Saboteur
○ Motto: “Sow panic and surrender will bloom!"
○ Profile:
If it were necessary for him to breathe, war would be his oxygen. His lust for destruction knows no cause, no purpose - it only craves the fear it instills in others, the destruction it leaves in its wake. His screaming voice and belligerent manner alone could shake up an opponent. His boldness and enthusiasm is often enough to turn his army from beating a hasty retreat to launching a new offensive. Frenzy’s arms transform into pile drivers which he uses to generate earthquakes. Additionally he can spin drum-like devices in his torso at high speeds generating sounds of up to 200 decibels. This disrupts the circuitry of anyone in earshot. Frenzy is particularly adept at disorienting his opponents by neutralizing their auditory and balance centers. Like his brother Rumble, Frenzy's small stature limits his physical strength. A very cool, logical reaction to his manic onslaught is often an effective way of countering his intimidating effect. 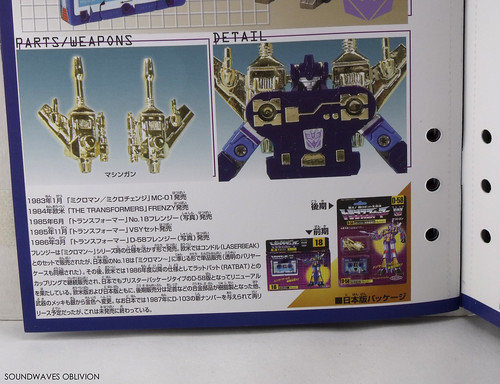