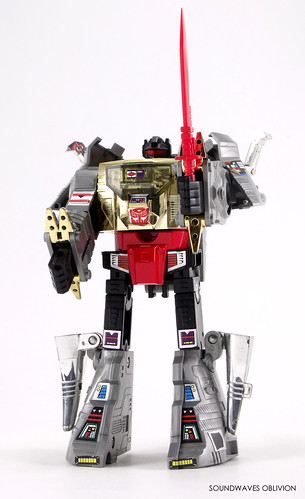 Grimlock
Function: Dinobot Commander
Motto: "Among the winners, there is no room for the weak."
Most fearsome and powerful Dinobot. Although dedicated to the Autobot cause, resents authority. Cold, merciless, but a valiant warrior. His contempt for the weak, including all humans. Great strength, uses jaws to break almost anything in two. Carries energo sword and galaxial rocket launcher in Dinobot mode. Other than arrogance and lack of speed, has no real weakness.
STR…10; INT...7; SPD...3; END...10; RNK...9; CRG...10; FPR...8; SKL...10 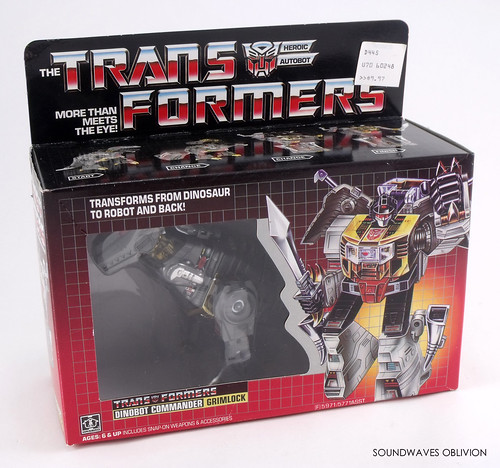 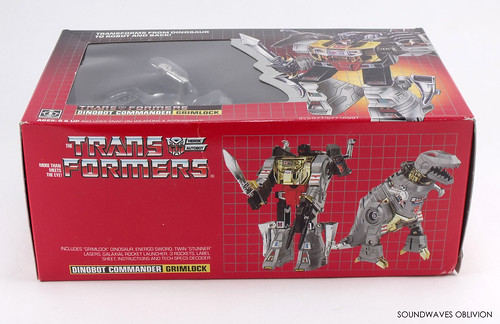 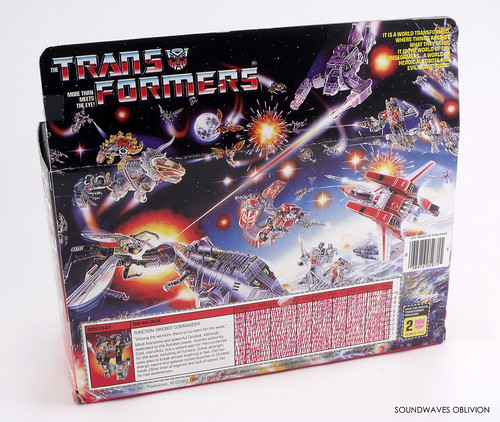 Grimlock is perhaps one of the most popular Transformers from the original series. That in part is possibly due to the 1984 cartoon and the brilliant Gregg Berger who brought Grimlock to life, the toy itself isn't too bad either and is still inspiring the current figures. 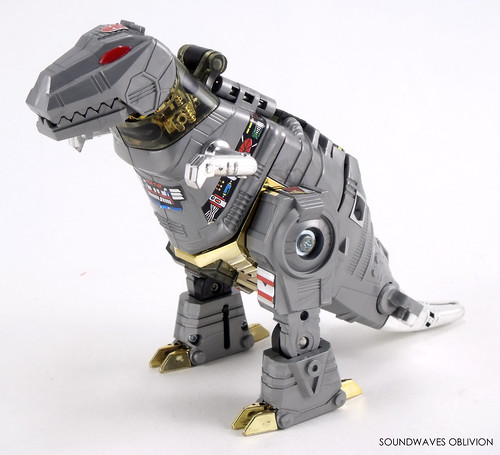 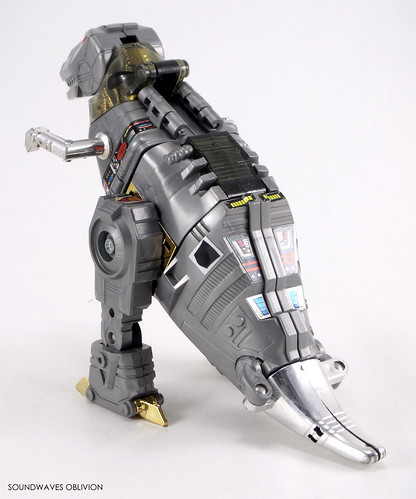 Grimlock comes boxed in his Tyrannosaurus Rex mode and comes with a missile launcher (with 3 missiles), a gun and a sword. The silver mechanical T-Rex has quite a bit of motion for a toy of its age, the legs can move, the small arms can rotate and the dinosaur head can lift up and down and the mouth can open. There is a dark opaque canopy on the dinosaurs back which can open and close which was originally a seat for the Diaclone pilot. 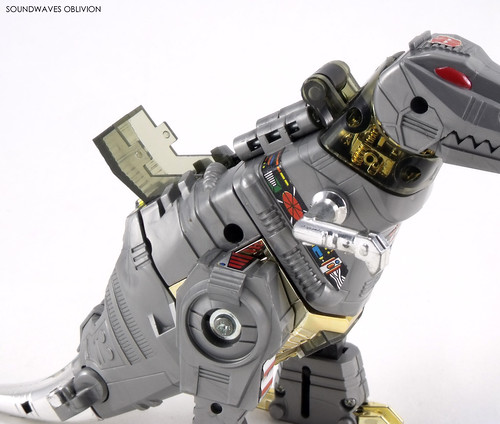 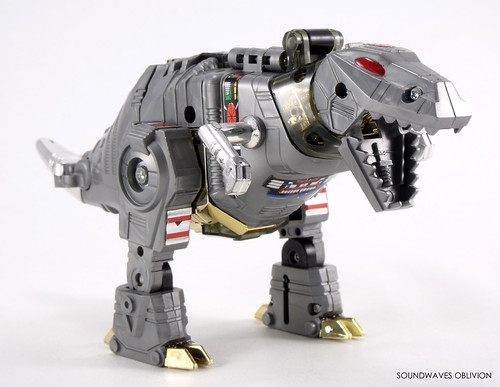 Transformation is simple enough and in robot mode Grimlock looks rather formidable. Grimlock's gold chest stands out on from the silver body and the head is set back quite a bit. You could have Grimlock hold either of the three weapons and the arms, which are also the dinosaur legs, can spin around. They spin around quite a bit if it is a well played with figure. 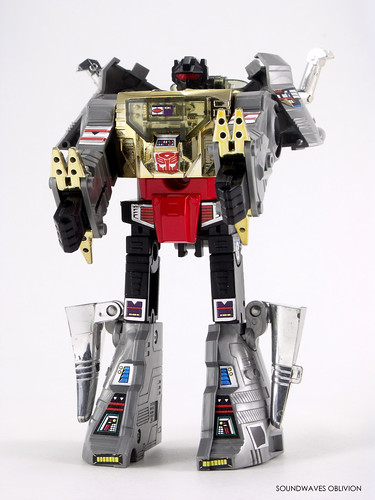 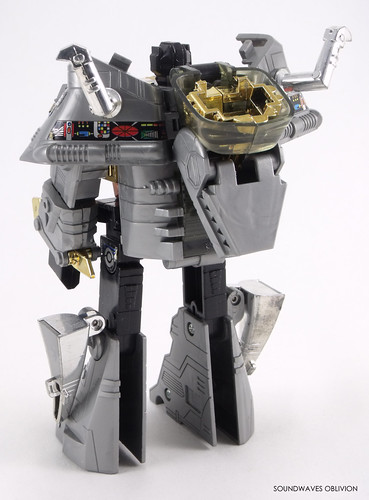 The robot legs can bend at the knee although this is part of the transformation. There is another joint in the legs which allow them to rock forwards and backwards slightly but not enough for this to be useful. 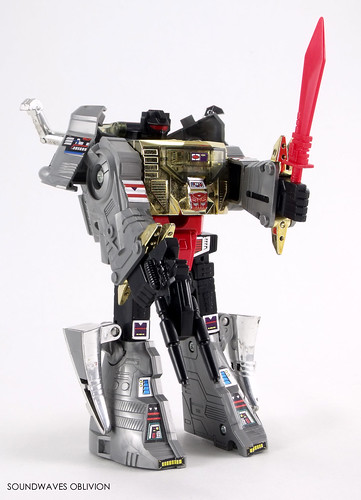 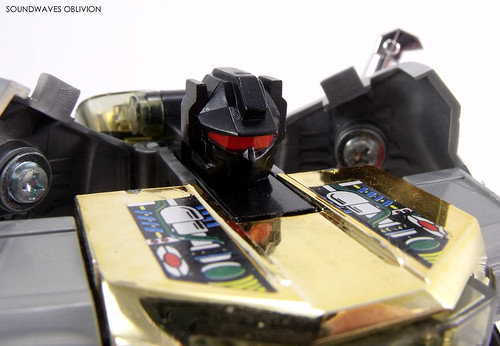 Overall Grimlock is a great early Transformer figure and is by far the best out of the Dinobots.

Grimlock started off in the "Dinosaur Robo" sub-line of Diaclone and was released as "No. 1 Tyrannosaurus" in March 1984. There are several main differences between the original Diaclone release and Hasbro's Transformers version.
When GiG licensed the Diaclone line from Takara in 1984, the Dinosaur Robos were also brought across to Italy (apart from Pteranodon aka Swoop, although this was sold in Italy in its Japanese box). The early versions of the GiG "Tyrannosaurus" were identical to the original Japanese release including the sharp teeth, chromed sword, blue waist and Diaclone driver. As with most of the Trasformer releases, GiG removed the missiles and included 2 "safety" missiles. The included sticker sheet was the same as the Japanese version but the logo in the top left of the sheet is cut out. Later releases saw the teeth rounded down and the red waist from the Transformers version.
Hasbro released Grimlock and the Dinobots either late 1984 or very early 1985. The early boxes feature the 1984 back of the box artwork and later releases featured the 1985 artwork. The fact the Dinobots debuted in episode 8 of The Transformers Season 1 cartoon which aired in October 1984, they might have been intended to have been released in the first wave.
In Japan, Takara released Grimlock in August 1985 and other than the box the figure was identical to Hasbro's version. Grimlock was released again in October 1985 in the "VSY" giftset which included Soundwave, Frenzy and an audio cassette. Below is the translation of Grimlock's bio from Takara's release:-
26 Dinobot Grimlock
Function: Dinobot Commander
Transformation: Tyrannosaurus
Ability: Powerful jaws can chew through anything. Equipped with an energy sword and double barrelled rocket launcher.
Character: A cool, ambitious Dinobot leader. Even his companions fear his powerful combat ability.


In 1990 Hasbro Europe released the "Gold Box" reissues and among them were three of the Dinobot's, Grimlock Sludge and Snarl. This Grimlock release was near identical to the earlier 1985 version. In Japan, all Dinobot's were made available in 1992 as a mail away exclusive. These were identical to Hasbro's 1985 releases right down to the box. As the early Transformers were being reissued for release in China, it is more than likely the Dinobots came from this stock.
Transformers Generation 2 saw the last use of the Grimlock mould and interestingly there were 3 variants. The first 1992 release of Grimlock was identical to the 1985 version apart from the packaging, the yellow Transformers tampograph on the right robot leg and the missile launcher was omitted. In 1993 Grimlock was released in a turquoise colour and then a blue colour. The blue Grimlock is the most common to find. In Europe only the blue Grimlock was released in 1994 on card instead of the plastic clam-shell of the North American version. There was a fourth colour variant planned for Generation 2 but it never made it past the a mock up as well as newly drawn artwork. This version of Grimlock would have been orange with blue stripes which was rather fitting for the colour choices used in Generation 2.

Although Generation 2 marks the last use of the original figure we have seen countless other Grimlocks released over the years including a Masterpiece version and more recently the 2021 Studio Series Leader Class version which is the most cartoon accurate version that has been released to date.
Posted by Jeremy Barlow at 22:13