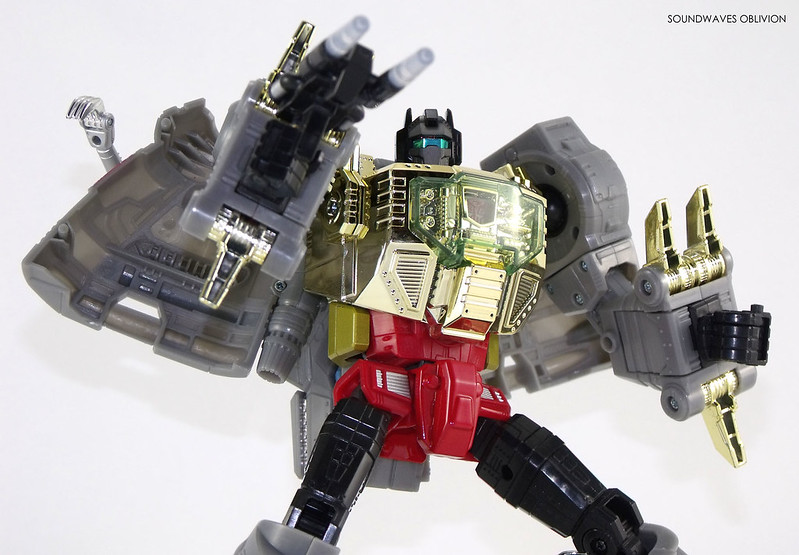 Weakness offends Grimlock. He considers none so weak as those who refuse to use their full strength to command victories. As a result, he's never had much respect for Optimus Prime. He barely even considers himself and his Dinobots to be part of the Autobot army most of the time. He only grudgingly helps the heroic Autobots because the tyranny of Megatron offends him even more than weakness. He longs for the day when Optimus Prime makes a final mistake, leaving a vacancy that Grimlock will be more than happy to fill. 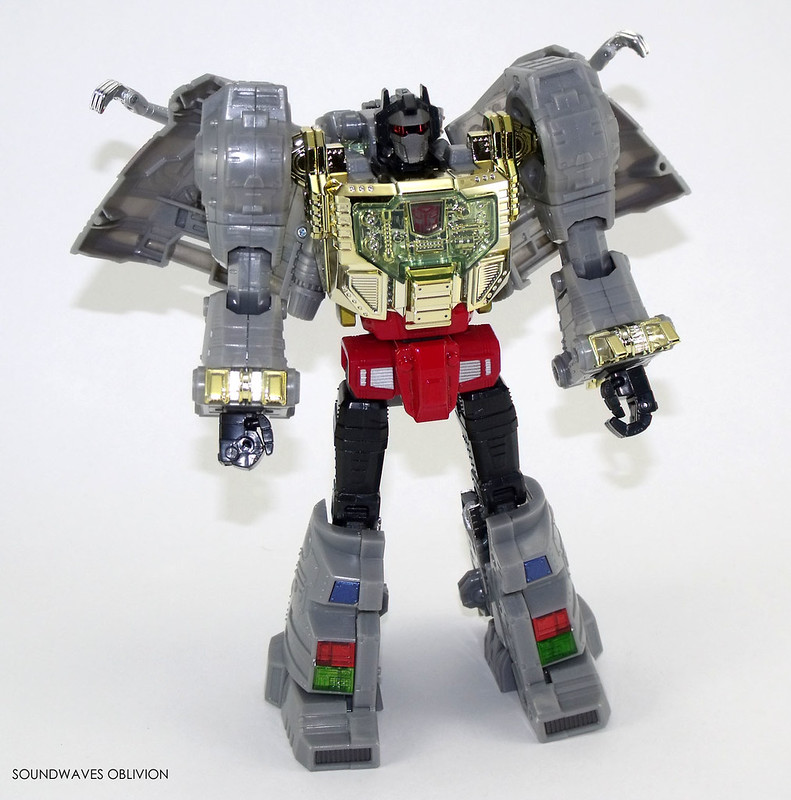 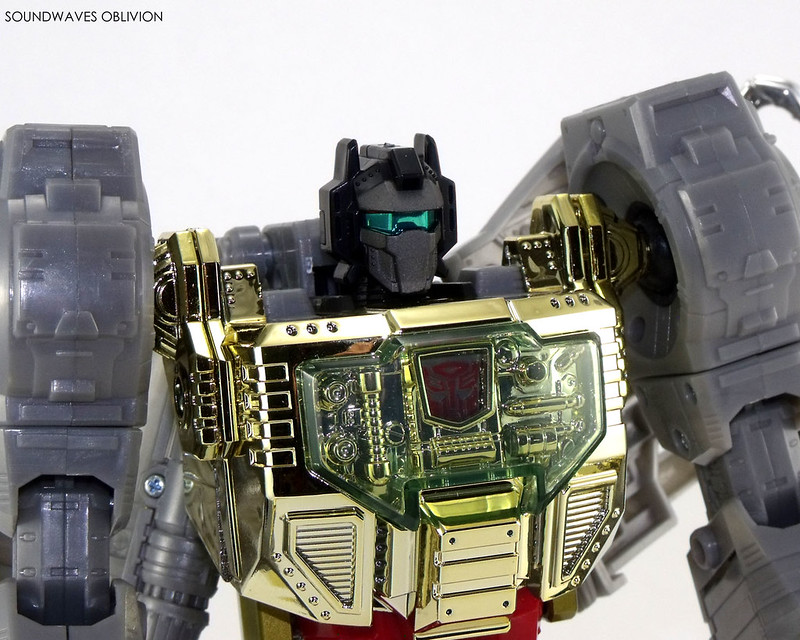 Grimlock is one of the earlier Masterpiece figures who still sits well amongst the post MP-10 Convoy and the Autobot car releases. When initially released in 2009 he was the most expensive figure to be released at the time, priced at 13000 Yen. As well as the sword and gun that you'd expect, it was also packaged with a mind transfer device and a waiter set - obscure references to individual episodes in the cartoon series and the figure could have done without unless Takara Tomy needed to add pieces to justify the high price. 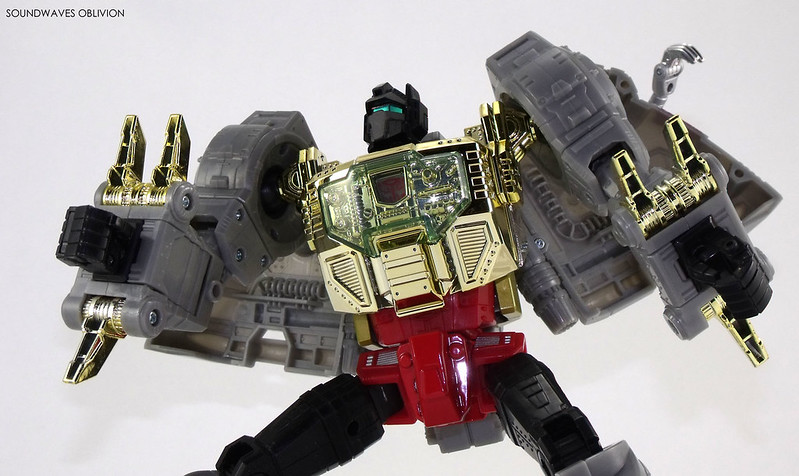 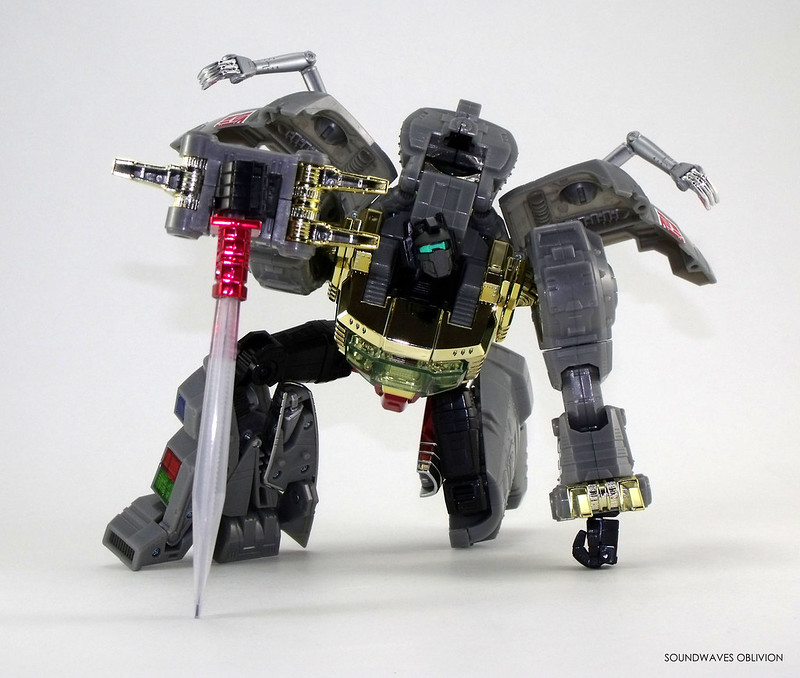 Fast forward to 2014, Hasbro re-released Masterpiece Grimlock in their re-branded Masterpiece line numbered MP-03, again as a Toys R Us exclusive. This was a welcome release to those who missed out seeing as this figure commanded a high price on the secondary market. However this itself came with a $99.99 USD RRP price tag; however when it was first released the price was dropped to $59.99 and then jumped to $79.99. In the UK however Grimlock was sold at £99.99, which dropped to £69.99 and later £34.99 in subsequent sales. Hasbro's original release in 2010 was priced at $59.99 and I'm unsure as to this price discrepancy unless Hasbro were capitalising on the knowledge that this figure was highly sought after. 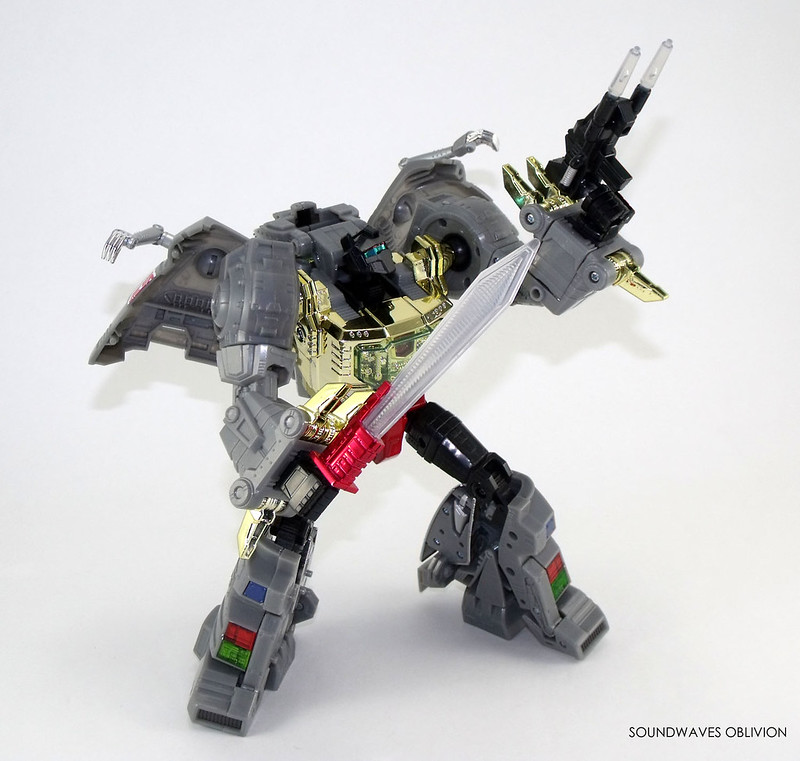 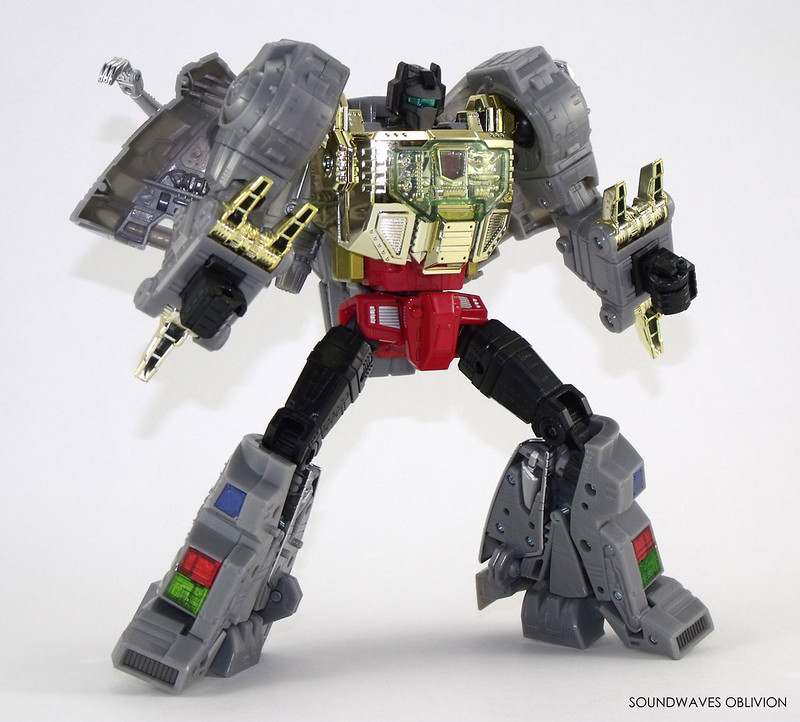 With a higher price you may expect higher quality but this 2014 version feels slightly cheaper and mine does have a few stress marks straight out of the box mainly around the robot legs. For accessories it comes with the same as Hasbros previous offering, the sword, gun and crown. One main difference with this figure is the translucent plastic has a green tint to it rather than the previous smoky tint, luckily in hand its not that noticeable nor does it detract from the overall figure. Grimlock is cast predominantly in grey plastic and it doesn't have the metallic look of the past releases which is one of the reasons it looks quite cheap. I've seen many complain that the figure is quite loose but certainly with my version compared with my 2009 MP-8 Grimlock I don't really see a difference with tightness. 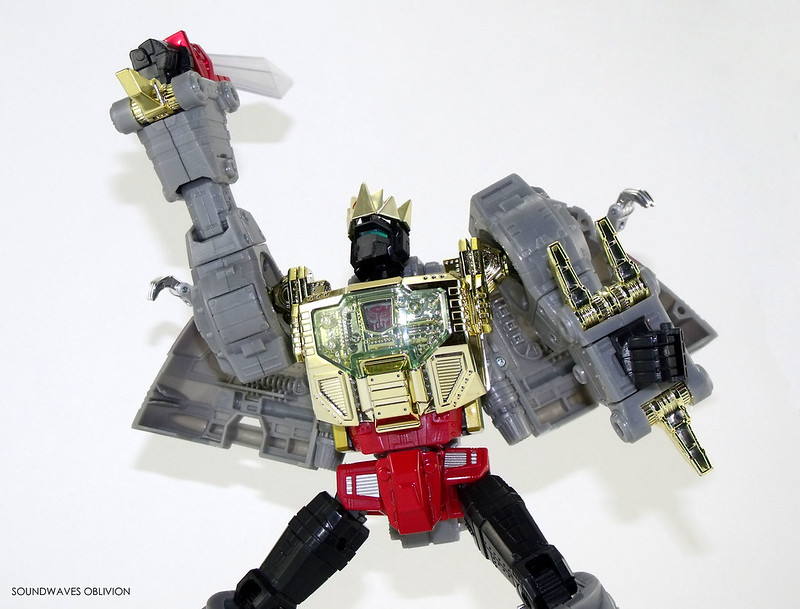 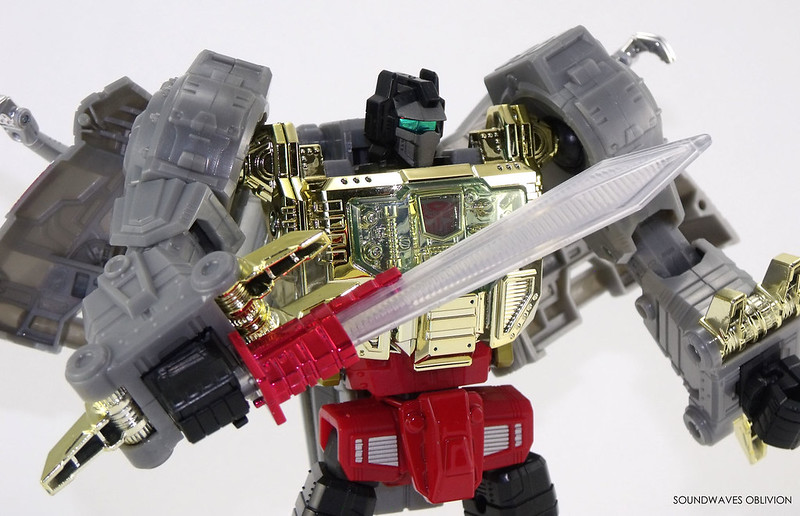 Robot mode and T-Rex mode remain impressive and retain all the original features. In robot mode the fists still lights up, though I'd rather be without this gimmick; the switch at the back of the robot head changes the eyes from red to blue or vice versa. 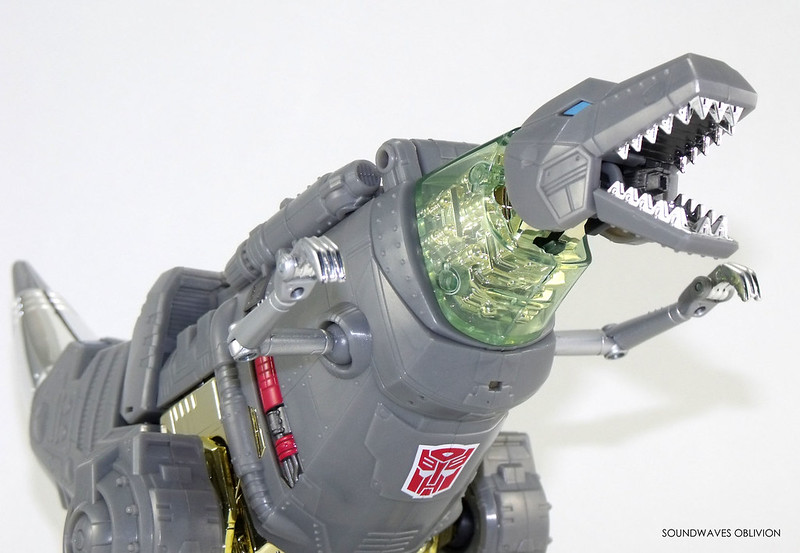 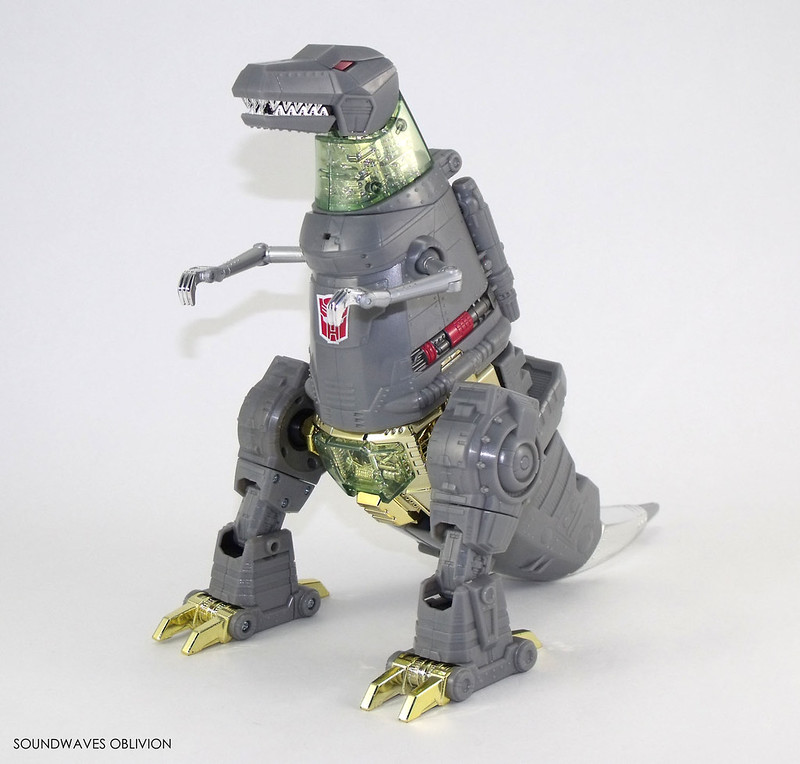 T-Rex mode is quite solid and as with the robot head, the eyes can be switched from red to blue, the teeth have also been rounded for safety reasons. The snapping jaw feature (open the jaw then press the left cheek to close) is quite stubborn and tends not to work that well; additionally when you move the tail from side to side it makes the dinosaur head move - another feature that the figure could have done without in my opinion. 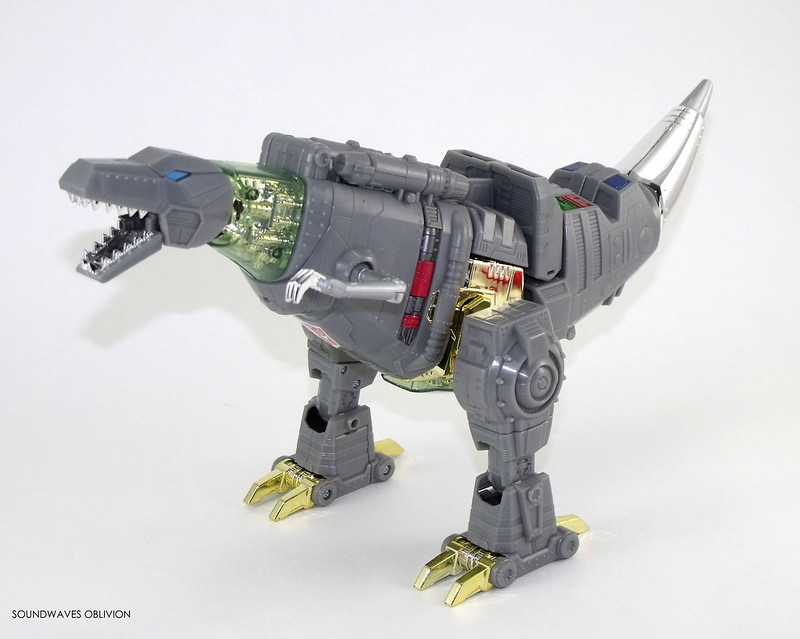 The interesting addition is the Diaclone Driver / Inch Man cockpit which this retains from the original 1985 release. There is even enough room for the MP-10 Spike to sit inside albeit not fully. 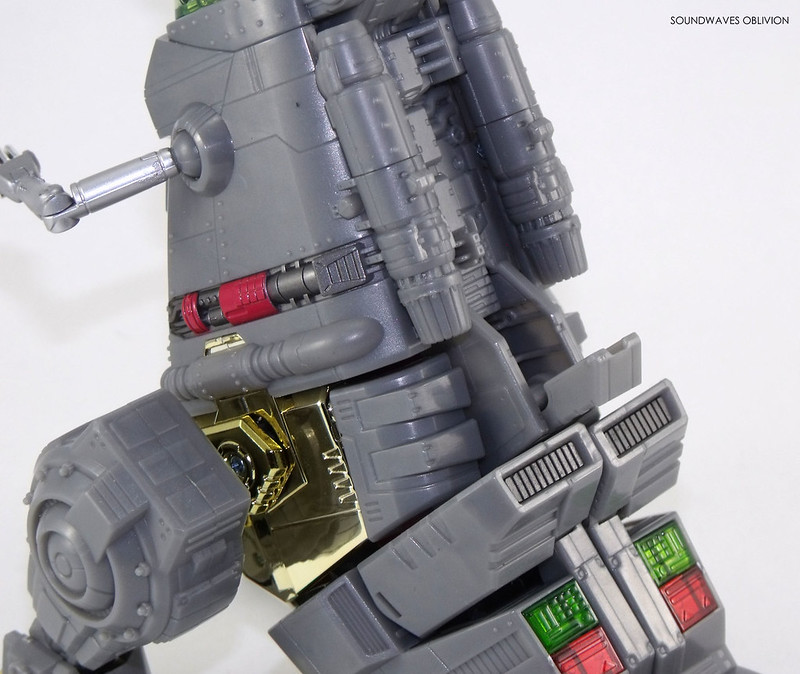 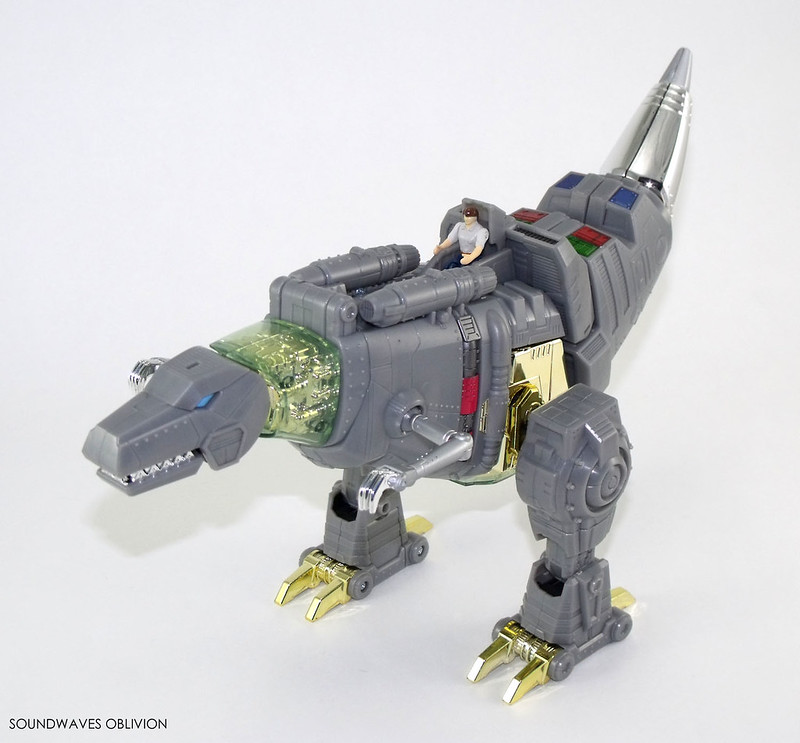 This figure is certainly one to pick up especially as its much cheaper than the other Masterpiece Grimlock releases (at the time of writing). 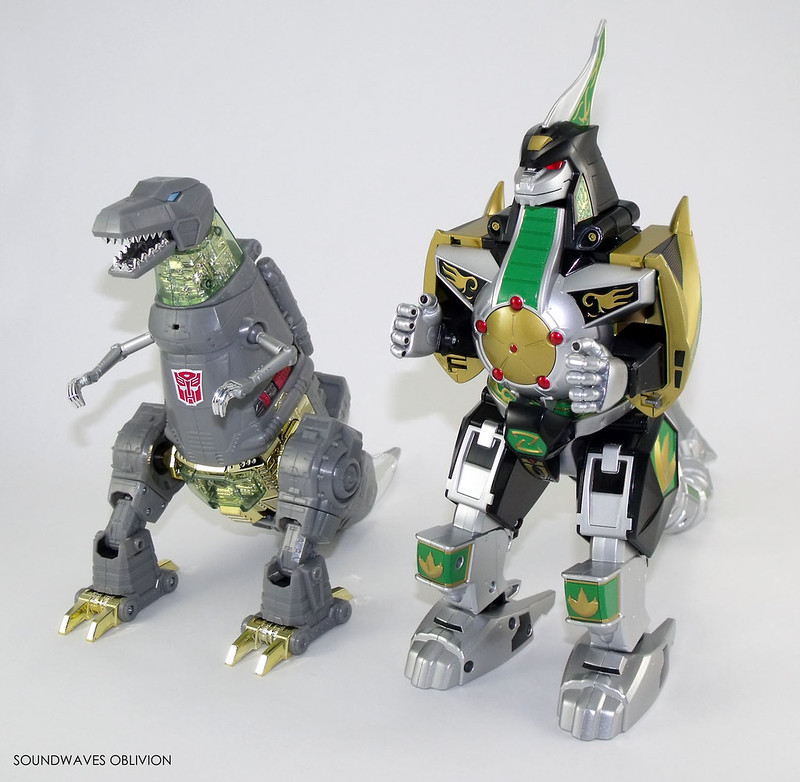 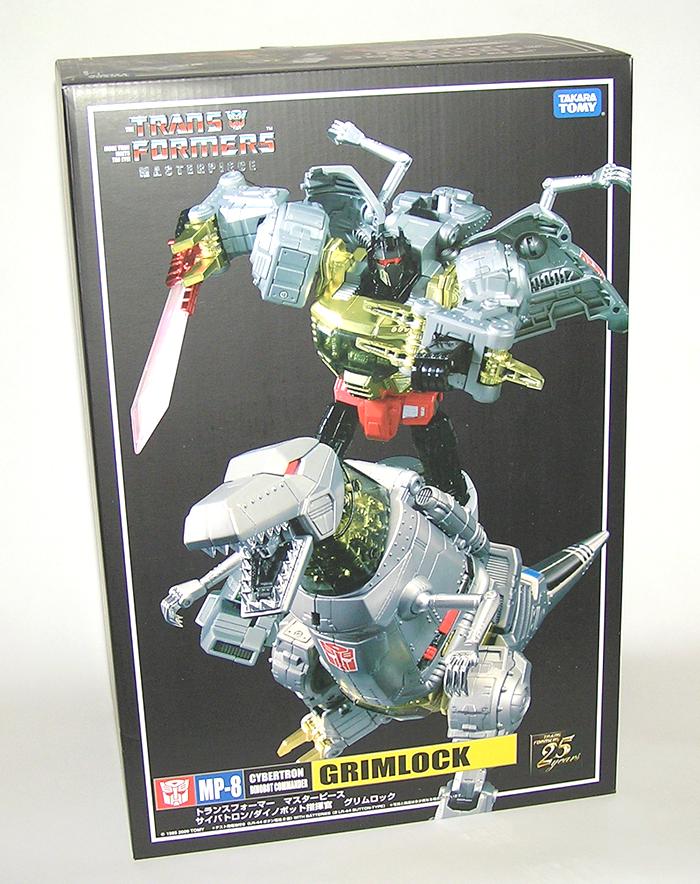 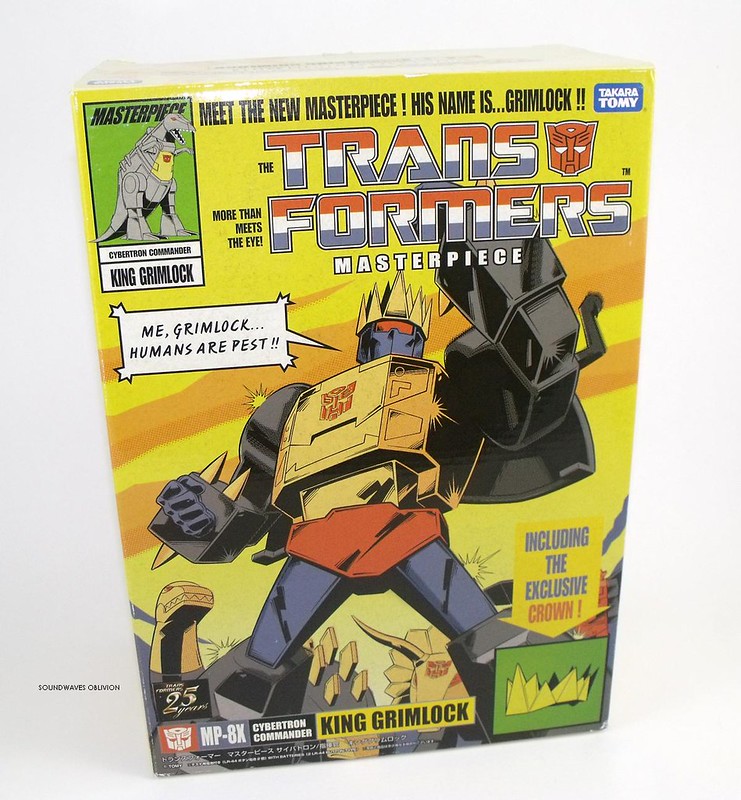 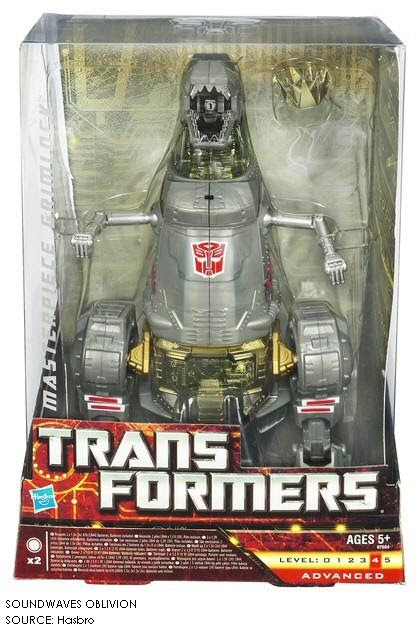 You can tell the 2014 reissue apart from the original as this one sports a 30th Anniversary logo on the bottom right hand side of the box. Additionally this came with a flame attachment which could either fit on the sword or flame thrower in the dinosaur mouth. It also came with a cheap looking crown. 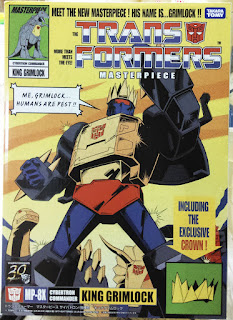 The second reissue from 2014, as with the MP-8 reissue this has a 30th Anniversary logo on the box. This also came with a plastic throne for Grimlock to sit on. 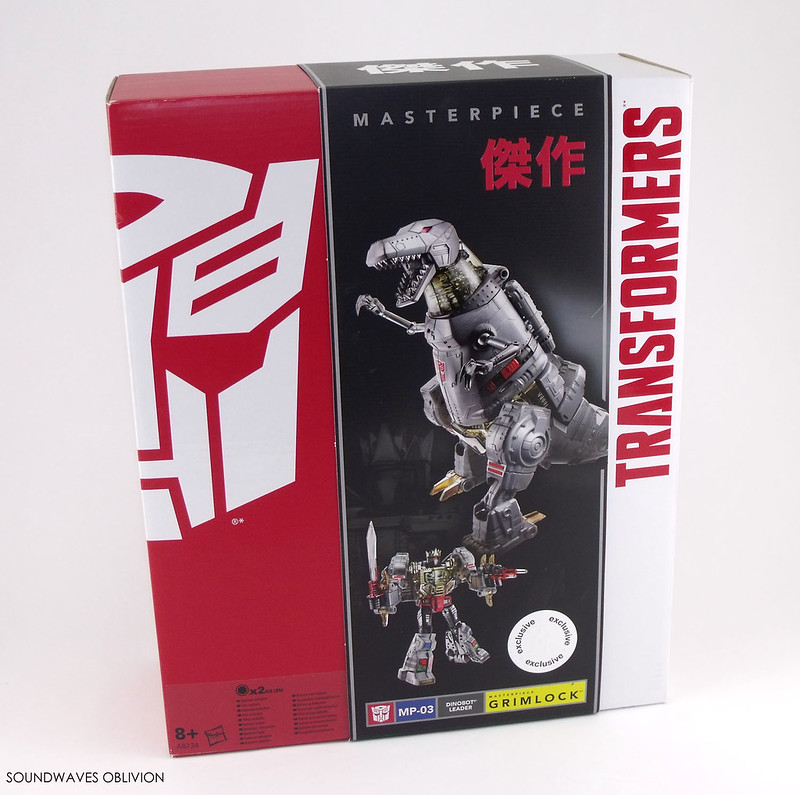