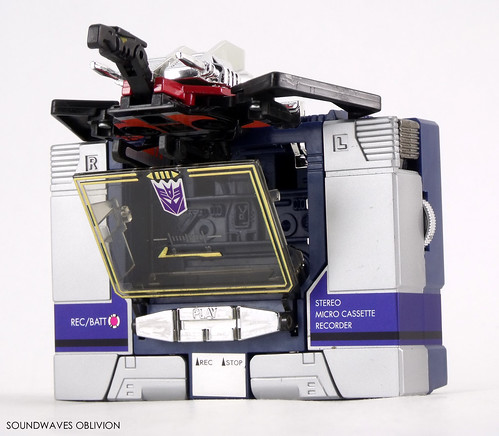 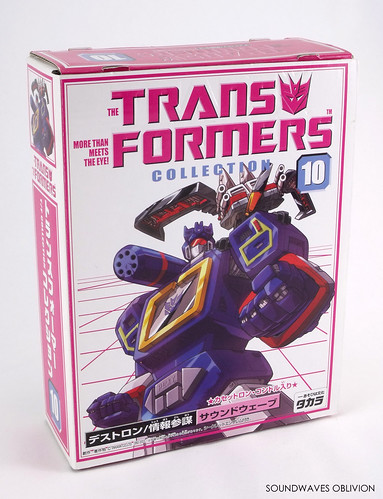 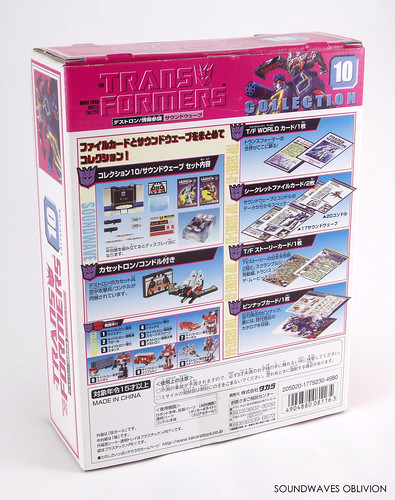 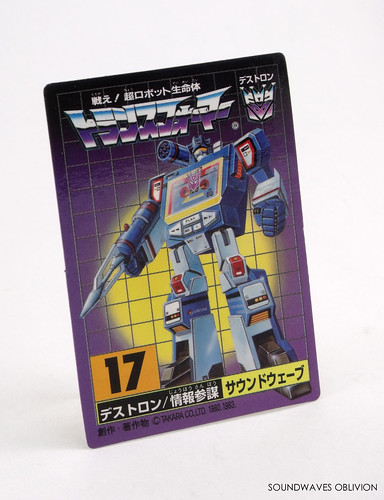 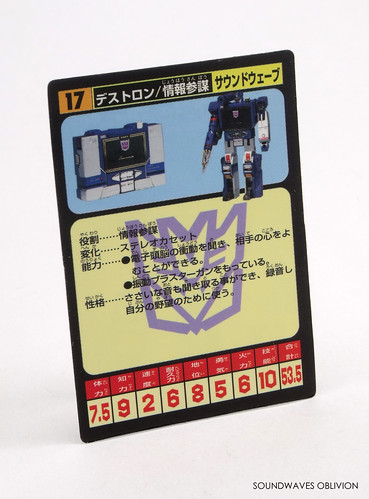 To date, G1 Soundwave has had many reissues but this is the first which was released in September 2003. Rather than a straight reissue of the 1985 version Takara released in Japan, this is almost identical to the version Hasbro released in 1984 in terms of included accessories although this comes with Condor (Laserbeak) rather than Buzzsaw. 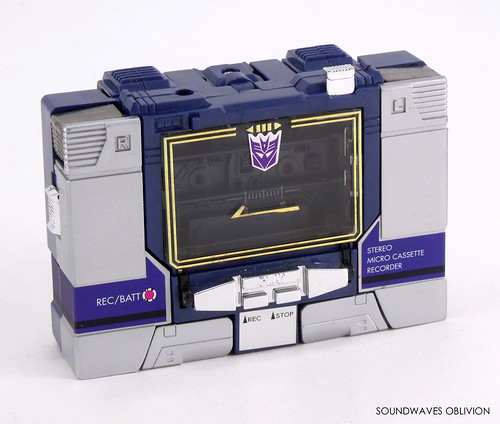 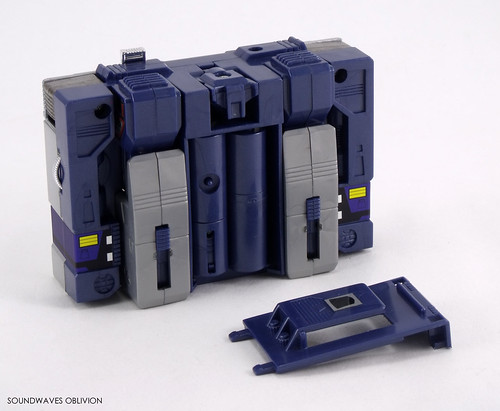 Takara's original Soundwave (like the original Micro Change release) came with the headphones and microphone as well as a wire to connect the headphones to the cassette player. Unfortunately these were omitted for the reissue. The reissue did however come with a cassette case for Condor which is an accessory that Hasbro did not release. 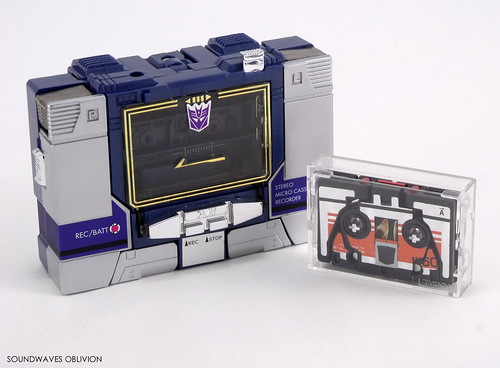 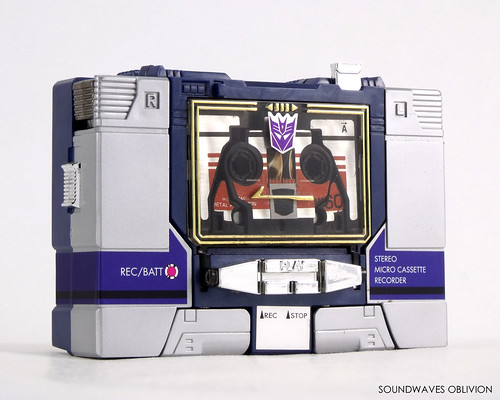 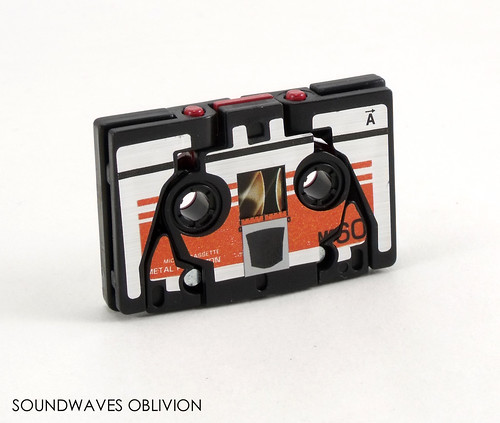 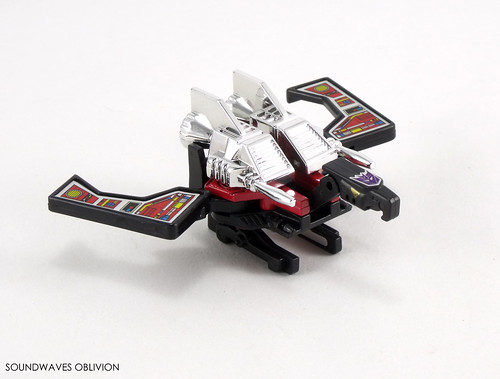 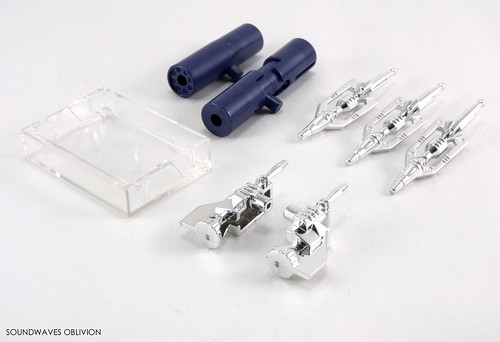 Soundwaves iconic cassette player is very loosely based on the 1979 Sony Walkman TPS-L2. The Walkman originally came in blue and silver, colours that would be borrowed for the Micro Change "Cassette Man" who would later become Soundwave.


Unlike the Sony Walkman which plays full size cassette tapes, Soundwave can only accommodate a Microcassette. Pressing the top chromed button will open the cassette door where you can insert the included Condor. On the rear of Soundwave is a removable belt clip, when removed you can insert the two faux AA batteries. These details give an overall authentic feel to the cassette player alternate mode and the similarities with the Sony Walkman are probably the reason many fans remember Soundwave so fondly. 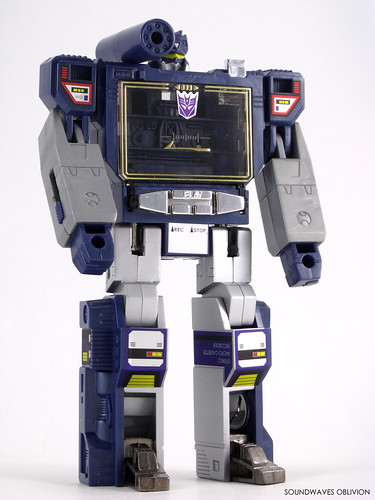 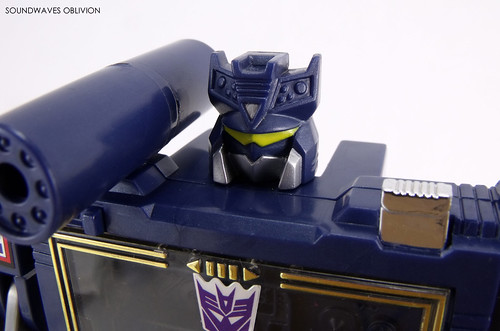 Transformation into robot mode is very straightforward with the sides of the cassette player folding down to form the legs, the arms folding from the back and the robot head flips up and rotates around. One of the batteries fits on the right hand side shoulder and the other battery extends and you can insert one of the three missiles. 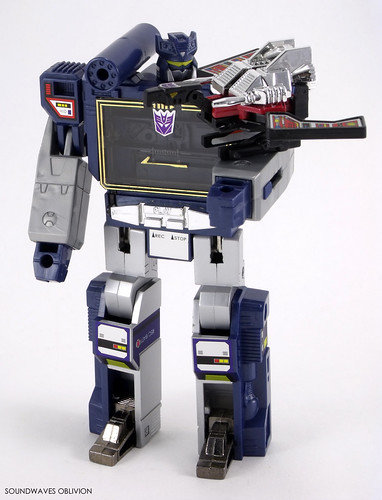 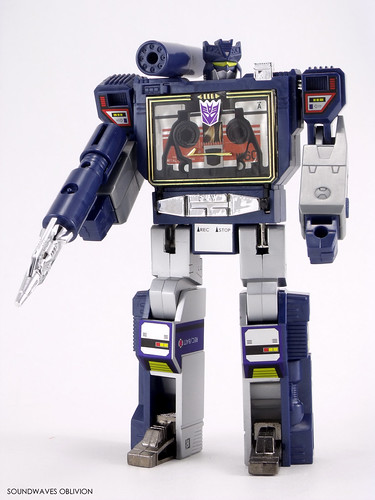 The Decepticon insignia is based on Soundwave's head sculpt. Although it's hard to imagine Soundwave with any other head, early Micro Change concept designs show Cassette Man with the Diaclone 4WD Hilux (Trailbreaker) head.

Compared to the original Soundwave, the blue colour is noticeably darker but it doesn't detract from the overall quality of this figure. If you were wanting to choose between the various Soundwave releases, other than going for an original, I would opt for the 2007 Encore version. The Walmart 2019 Soundwave reissue has an excellent box recreation of Hasbro's original 1984 release but the figure itself does not that that quality feeling of the earlier reissues. 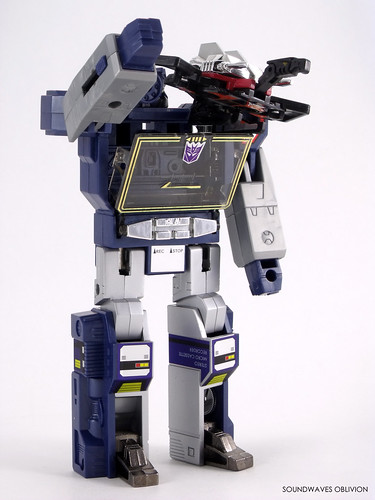 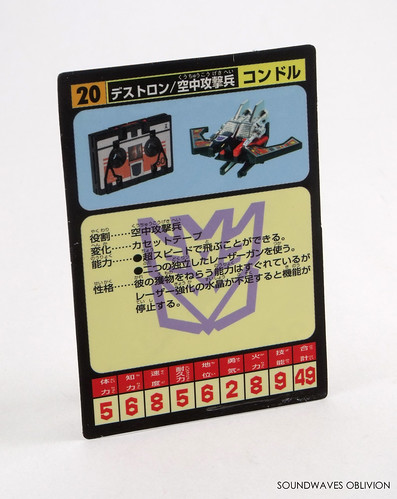 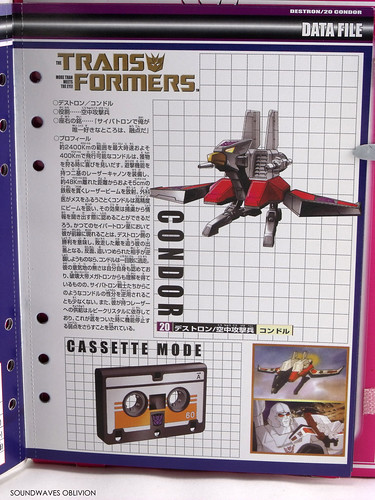 ○ Destron Condor
○ Function: Aerial Attack Soldier
○ Motto: “The only point I like in Cybertrons: melting point."
○ Profile
Takes pleasure when hunting for his prey. Condor can fly up to speeds of 400km/h with a range of 2400km. Equipped with two independently targetable laser cannons. Can fire a laser beam which will penetrate an iron plate 5cm thick from a distance of 48km. Condor uses these beams like a surgeon uses his scalpels - with extreme precision. He employs this talent when extracting information from his captives. When he used to appear on the battlefront on Planet Seibertron, it usually meant the Destrons were victorious and it was his turn to pick off the survivors. On the other hand however, should his prey strike out, Condor will run for safety. He makes no attempt to hide his cowardice but is still appreciated by Megatron, Emperor of Destruction. It is not uncommon for Cybertron warriors to use Condor’s lack of bravery for their own advantage. He has a serious dependency on ruby crystals which power his lasers. He is so terrified of this weakness that when his supply runs out, he will shut down. 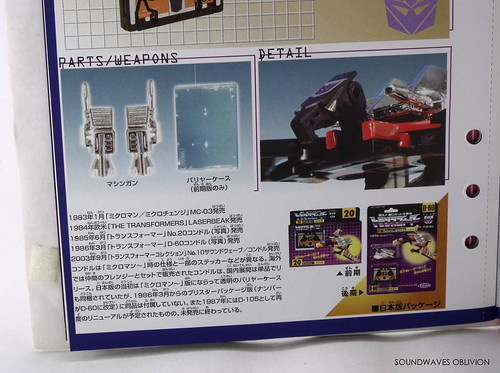 There was a different version of Condor in the Microman series which also featured different stickers. Overseas, Condor was sold in a set with Frenzy but was sold individually in Japan. The initial Japanese release came with a cassette case like the “Microman” version. When it was reissued in March 1986 in a blister package (now numbered D-60) the cassette case was omitted. Condor was scheduled to be released once again in 1987 as D-105 but this release was cancelled. 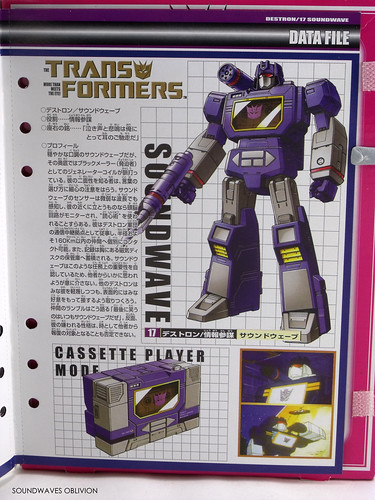 ○ Destron Soundwave
○ Function: Chief Information Officer
○ Motto: “Cries and screams are music to my ears.”
○ Profile
Beneath Soundwave’s affable tone beats the generator coil of a blackmailer (bully). Those who are aware of his duality pay close attention to their choice of words. Soundwaves sensors can detect even the weakest of wavelengths. If someone is standing nearby he can “read their mind” by monitoring their brain's electrical impulses. Serves as the Destrons communications relay station and can keep them all in radio contact within a radius of around 160km. His recordings are stored in the magnetic disks housed in his chest. Soundwave does not care what others think as he is well aware that he is indispensable. Although the other Destrons despise him, they pretend to like him to stay on his good side. A Rumble says “Soundwave always has the last laugh.” On the other hand, his hateful personality has sometimes resulted in retaliation from others. 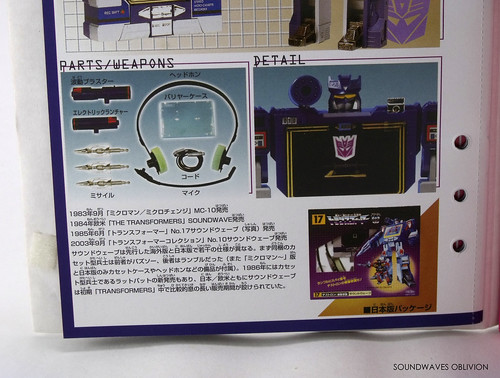 The domestic and overseas releases of Soundwave were quite different. Firstly the Western release included the cassette warrior Buzzsaw whereas the domestic release came with Rumble (the Microman and Japanese versions also came with additional equipment such as cassette cases and headphones). 1986 saw the release of a new cassette warrior, Ratbat. In both Japan and the west, Soundwave had a relatively long sales period in the “Transformers”.
Posted by Jeremy Barlow at 10:28