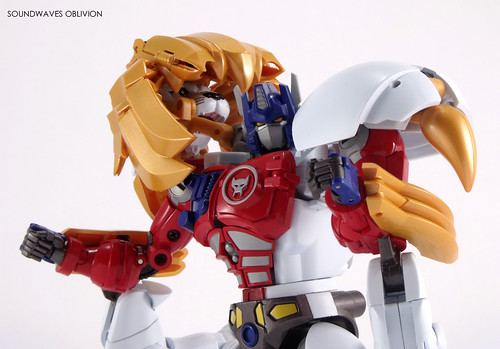 Profile (Translated from the Trading Card)
MP-48 Cybertron General Commander Lio Convoy (Beast Wars)
Function: General Commander
Height: 3.0m (In Robot Mode)
Weight: 2.0t (In Robot Mode)
Profile:
The Cybertron Military Commander and Space Guard of planet Gaia transforms into a white lion. Highly intelligent with a will of justice; he is the strongest Cybertron warrior and an excellent arbiter yet he loves peace and would rather not fight. Has his comrades deepest trust. There are times he is so serious he comes across as humorous. His specialist battle techniques are the Lion Typhoon and Lio Claw. The Energon Matrix in his chest is a symbol of a Commander.
STR...10; INT...10; SPD...10; END...10; RNK...10; CRG...10; FBL...9; SKL...10 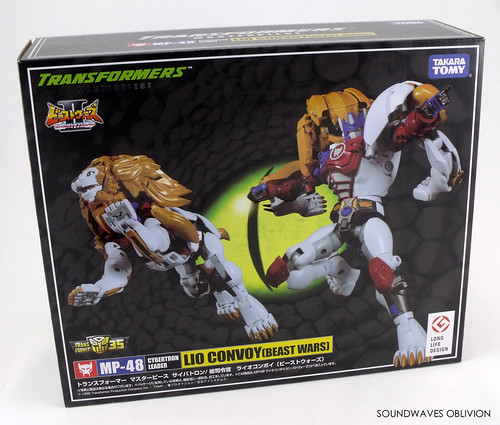 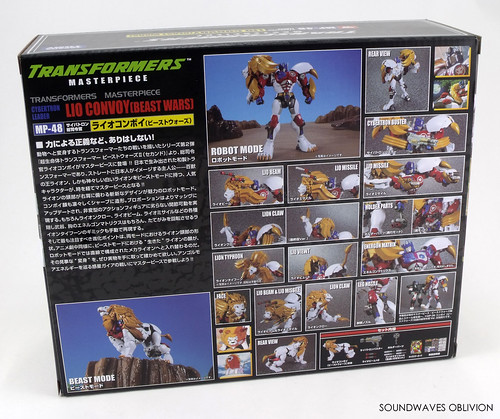 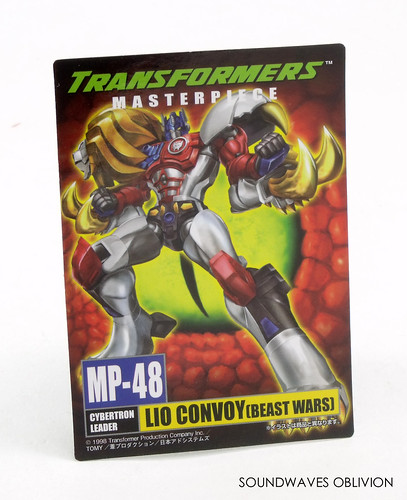 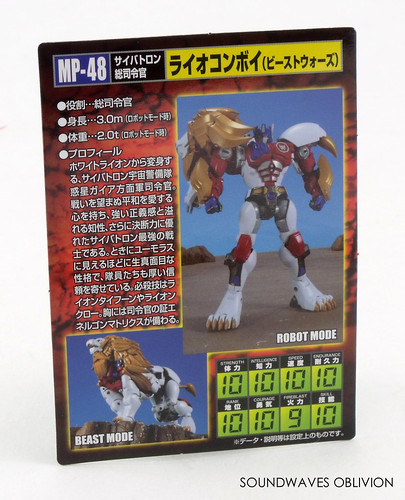 Lio Convoy was released at the tail end of February 2020 and retailed for 20,000 Yen. Hasbro also made Lio Convoy available on their Hasbro Pulse website for $184.99 USD. A painted prototype which looks very close to the final version was unveiled at the 2019 Tokyo Toy Show in June with the other Masterpiece Beast Wars figures. Considering Takara had been focusing on the Mainframe CGI Beast Wars series, Lio Convoy was an unexpected release. 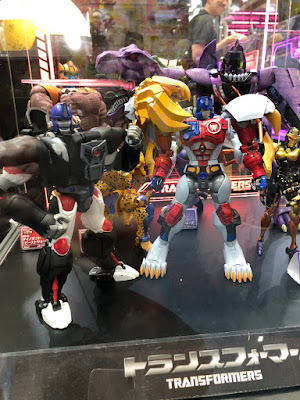 Lio Convoy comes from Beast Wars Second, a cel animation cartoon which only aired in Japan in 1998 after the first season of Beast Wars. Although it was not a direct sequel to the CGI Beast Wars it upheld the format of transforming animals for the Cybertrons, whereas the Destrons were a mixture of vehicles and animals. Lio Convoy and the Destron leader Galvatron were the only brand new toys created for the series, the other toys were either repaints or remoulds of Hasbro's Beast Wars or earlier toy lines. 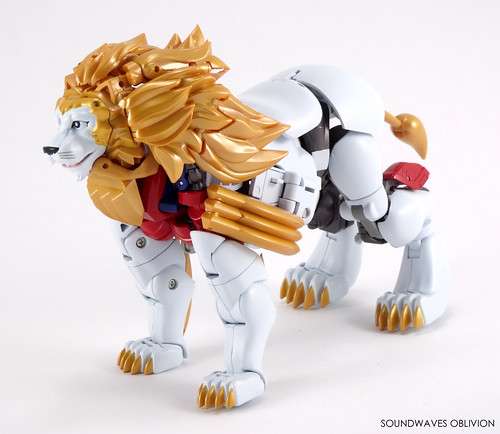 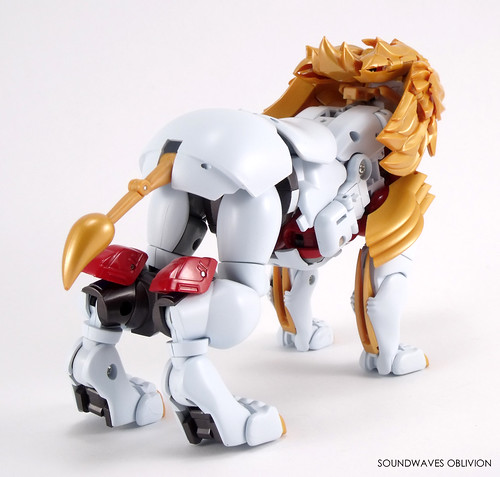 Technically MP-48 Lio Convoy is not the first Masterpiece from Beast Wars Second, that honour goes to MP-38 Convoy Legendary Leader Ver which was released in June 2017 and was a cel-animation repaint of MP-32 Convoy. 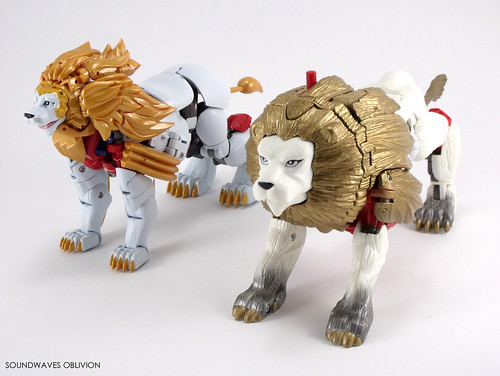 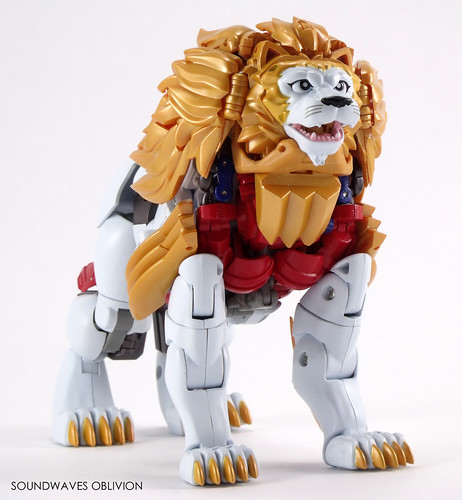 The back of the box is covered with Lio Convoys features however one accessory Lio Convoy did not come with was Artemis, a female android partnered with the rabbit "Moon" who monitored Planet Gaia in the cartoon. Artemis was pictured in July 2019's edition of Figure King (#257) and for whatever reason was not released. Seeing as though this is close to the finished article we may see this in a future release.


Lio Convoy comes boxed in beast mode and unlike the other Beast Wars figures I haven't taken to the lion mode and to me it doesn't seem as polished as the others. To appreciate the beast mode you will have to suspend your disbelief as there are very visible robot parts and panels, however when you compare this with the original Lio Convoy it certainly does stand out and you can tell it's based on the animation model. The lions mane and face are particularly animation accurate however the lions head is not as expressive as the other Beast Wars figures. The mouth can open and close and has paint detailing on the inside. Just like the original Lio Convoy you can flip up 2 launchers from the top of the mane and flip out the gold mane sections on the front legs to reveal missile launchers. Posability in beast mode is limited and certainly doesn't have the range of motion that MP-34 Cheetus has. 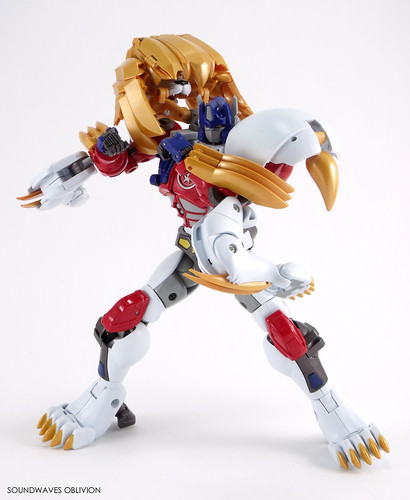 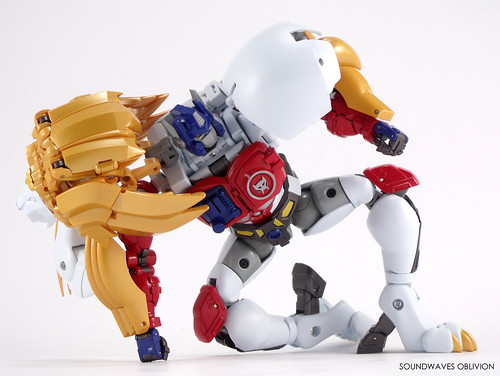 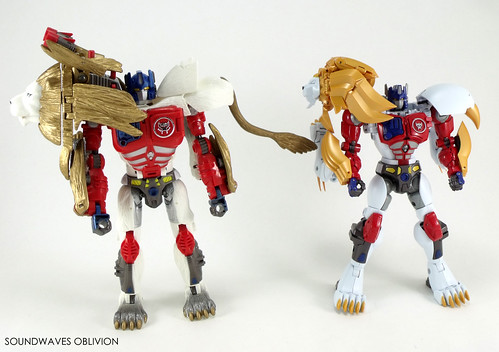 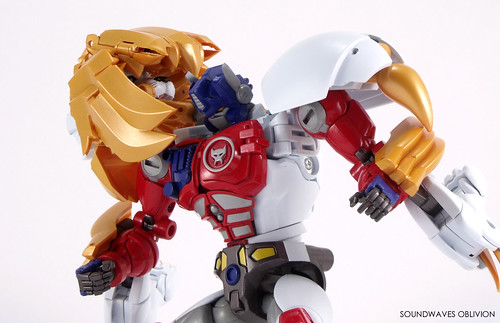 The robot mode is where this figure shines, it looks really good like it has just walked out of the cartoon and it certainly has presence. The proportions are spot on and the lion legs hanging off the robot arms don't get in the way (too much), and the lions tail which hangs from the shoulder folds neatly away. The joints in robot mode are scarily tight especially the double jointed elbows. I ended up loosening the elbow and the knee screws just to move them without feeling like I was going to break them but overall this is a very sturdy figure with great articulation. What it lacks in beast mode it more than makes up for it in robot mode, and that head sculpt is just amazing. The figure retains the Energon Matrix from the original 1998 toy. The door on the right hand side of the chest opens up to reveal the Matrix and on the inside of the door is a tiny sculpted Cybertron / Maximal insignia. On the original C-16 toy this was a heat-sensitive sticker. 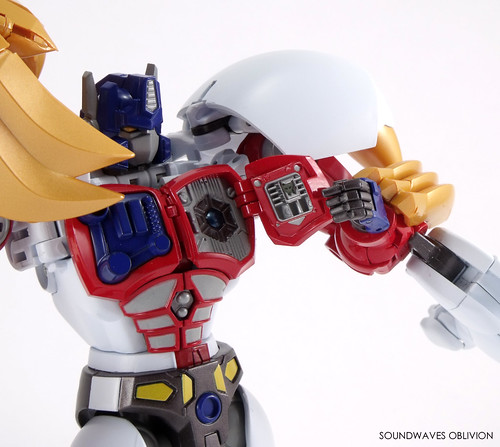 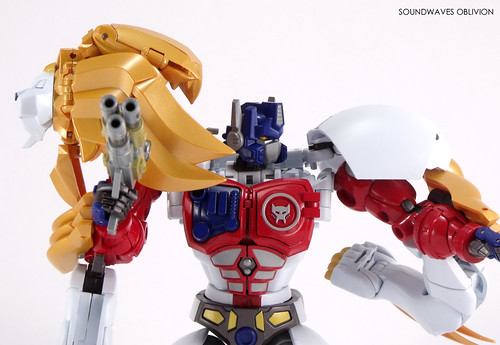 Another accessory which I find is an unusual inclusion is called the "Holder Parts" or Parts Holder which carries 4 of the 6 missiles that come with Lio Convoy. As well as a carry device, Lio Convoy can also use this as a hand gun. This was made specifically for the Masterpiece and was not seen in the cartoon. 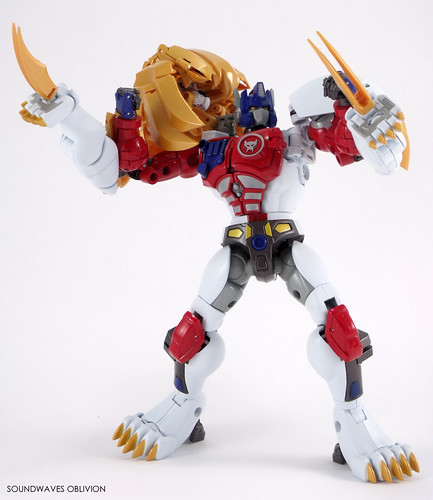 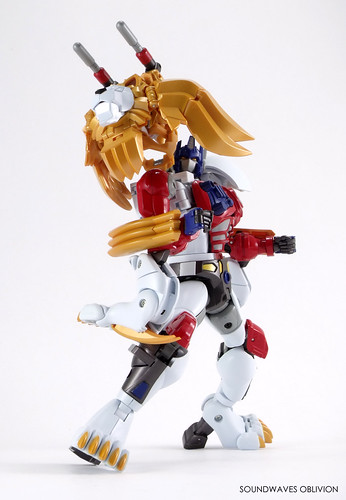 The rest of Lio Convoys weaponry is built in such as the "Lion Typhoon" where you spread out the lions mane and you can rotate this manually. The original C-16 toy included a red button which when pushed spins the mane around. The lion legs on the underside of the arms spin round and you can pull out the "Lion Claws" - these are incredibly sharp! The mane section son the robot arms flip forward and you can plug in a missile on each arm and you can flip up the hidden missile launchers in the lions mane and insert either the Lion Missiles or the Lio Beams. 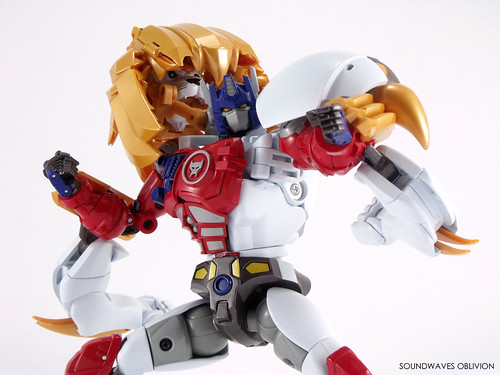 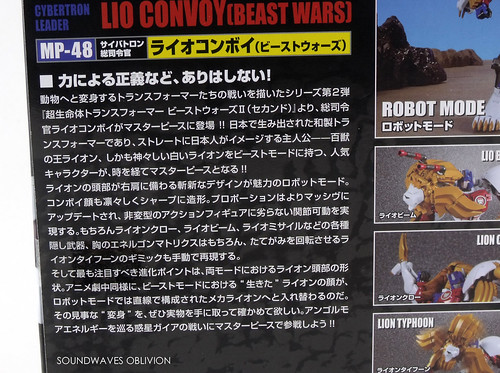 ■ You can’t have justice with the use of force!
General Commander Lio Convoy makes his debut in the Masterpiece Series!! He originates from the second series of Beast Wars, “Fight! Super Robot Lifeform Transformers Beast Wars II (Second)” which depicts the battle between Transformers who turn into animals. This Japanese made Transformer will spring straight into the Japanese imagination as the hero - a lion, king of the beasts. This popular character with the beast mode of a divine white lion takes his place as a Masterpiece!! His robot mode has a unique design with a lion's head on his right shoulder and Convoy's face has been precisely sculpted. His proportions have been greatly updated and has articulation on a par with action figures. He comes with various hidden weapons such as the Lion Claw, Lio Beam, Lio Missile and the Energon Matrix. You can also manually recreate the Lion Typhoon by rotating the mane. The most notable update with this version are the different lion heads in both modes. Just as seen in the cartoon, the “living” lion face in beast mode is replaced with a mechanical angular lion face in robot mode. We’d love you to pick this up and check out the spectacular transformation. Join the battle on Planet Gaia over the Angolmois energy with this Masterpiece!! 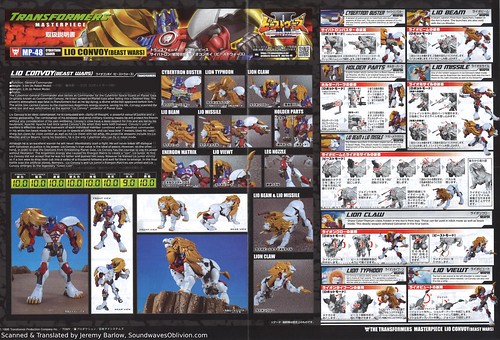 Lio Convoy (Beast Wars) (Translated from the instruction pamphlet)
●Function: General Commander
●Height: 3.0m (In Robot Mode) ●Weight: 2.0t (In Robot Mode)
●Profile:
The Cybertron General Commander also serves as Commander for the Cybertron Space Guard on Planet Gaia. Originally known as Commander Convoy, he crash landed on Planet Gaia after falling into a Destron trap. The planet's atmosphere was fatal to Transformers but as he lay dying, a divine white lion appeared before him. The white lion carried Convoy to the mysterious Angolmois energy source, saving his life. Convoy scanned the white lion and was reformatted as the warrior “Lio Convoy”, protector of Planet Gaia. Lio Convoy is an ideal commander, he is composed with clarity of thought, a powerful sense of justice and a strong personality. The combination of his kindness and strict military training means he will protect his friends without any consideration of his own wellbeing. Convoy’s crew have a deep respect for him and are led by his lieutenant, Apache. Apache had once saved Convoy’s life when they were both trainees. Convoy’s unit of warriors is effective due to the teamwork of each individual member combined with a steadfast commander. In his white lion beast mode he can run up to speeds of 200km/h and can leap over 7 meters. Uses his razor sharp lion claws for close combat as well as his Lio Viewt with tail whip. His projectile weapons include his Lio Missiles and Lio Beams. Using his boosters, he is the only Cybertron who can fly in robot mode. Although he is an excellent warrior he will never intentionally start a fight. He will never break off dialogue with Galvatron as justice is his power; Lio Convoy’s true value is the ideal of peace. However, on the other hand, in order to stop the Destrons from threatening Planet Gaia, Lio Convoy has the courage to use his power without hesitation. The Angolmois energy also caused his Energon Matrix to create a “son”, Lio Junior. At first Lio Convoy did not accept that he was his father and pushed him away. However he trained Lio Junior strictly as if a lion were to drop their cub into a valley of a thousand fathoms and wait for them to emerge. In the final battle over the artificial planet, Nemesis, Lio Convoy’s and Lio Junior’s Energon Matrices are united and Lio Convoy emerges as the legendary “Green Lion”. 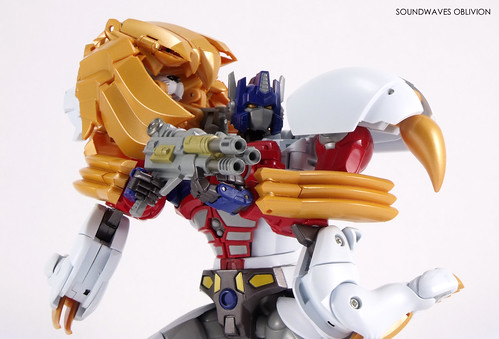 Weapon: Cybertron Buster (Translated from the instruction pamphlet)
A weapon of justice given to Cybertrons who do not have weapons of their own. This was a common weapon of its era and was mainly used by Big Horn and Diver as well as Lio Convoy. 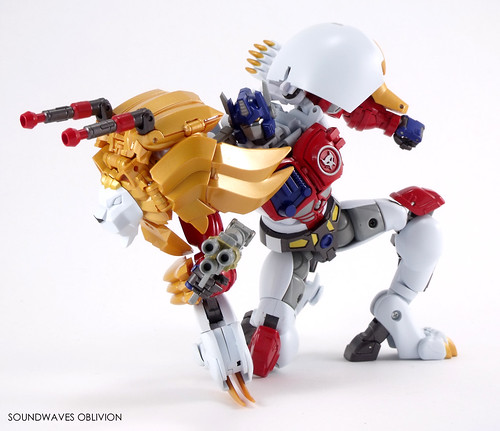 Weapon: Lio Beam (Translated from the instruction pamphlet)
A beam cannon fired from launchers hidden in the lion's mane. The launchers are also used with the Lio Missiles. 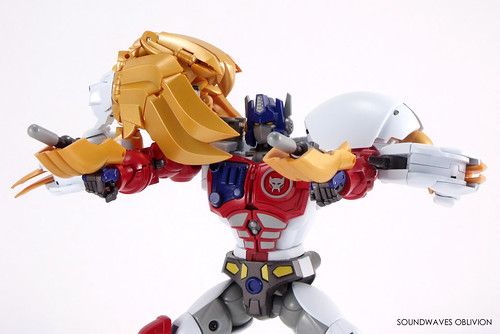 Weapon: Lio Missile (Translated from the instruction pamphlet)
One of the hidden weapons in Lio Convoy's robot mode. Missiles can be fired from the launchers built into the lion's mane on his right shoulder as well as his forearms. 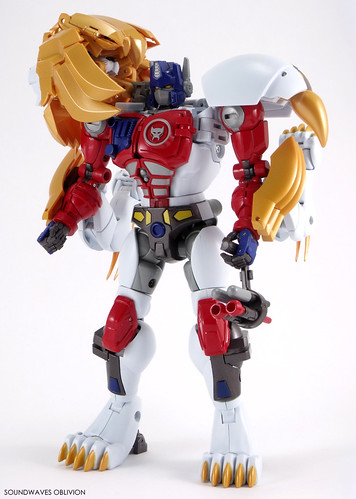 Weapon: Holder Parts (Translated from the instruction pamphlet)
A parts holder which carries the Lio Beam barrels and the Lio Missiles. As this is an original feature for this Masterpiece release, it can also be used as a hand-held weapon. 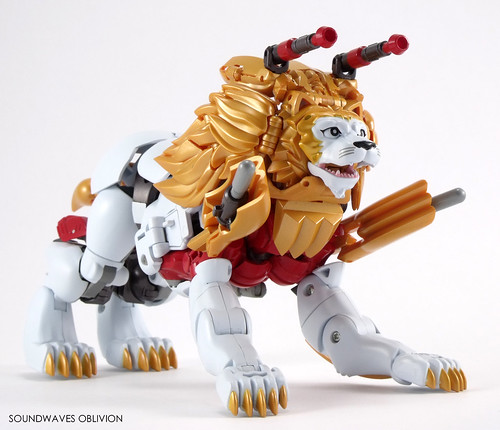 Weapon: Lio Beam & Lio Missile (Translated from the instruction pamphlet)
The hidden launchers in the lion's mane can be deployed In Beast Mode. This attack mode is completed with the deployment of the missile launchers hidden in the front legs. 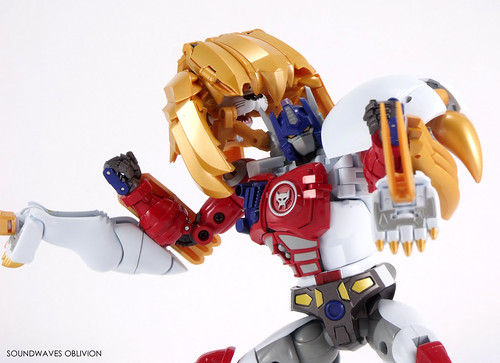 Weapon: Lion Claw (Translated from the instruction pamphlet)
Sharp Cyber-Titanium claws hidden in the lion's front legs. These can be used in robot mode as well as beast mode. This deadly weapon defeated Galvatron in the final battle. 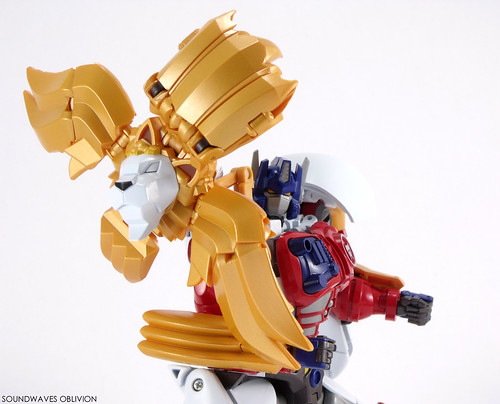 Weapon: Lion Typhoon (Translated from the instruction pamphlet)
Lio Convoy’s special ability where he is able to rotate the lion's mane at high speeds. This generates a powerful electromagnetic tornado which can blow Destrons away. It can also be used as a defensive shield. 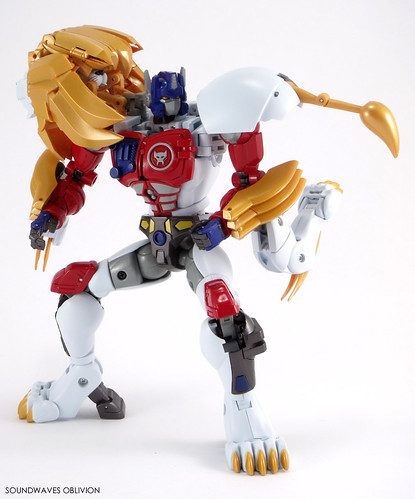 Weapon: Lio Viewt (Translated from the instruction pamphlet)
The lion's tail stored in his left shoulder in robot mode can be deployed when needed. Lio Convoy can also use this like a whip.
Posted by Jeremy Barlow at 08:53