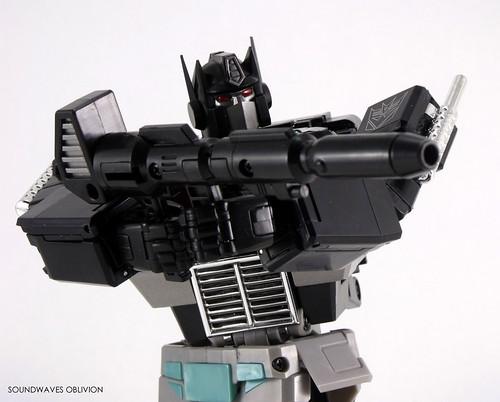 MP-49 Destron Unicronian Herald Black Convoy
Function: Unicronian Herald
Motto: “Demise is the destiny of all life forms.”
Profile:
Unicron created a killing machine in the image of Convoy. Although he possesses an identical combat ability to Convoy, his body is stained black from housing an evil spark. A formidable foe with incredible power and lacks any compassion or mercy. His mission is to obliterate any Transformer who stands against Unicron and he uses the destructive energy he collects to restore his master.
STR...10; INT...10; SPD...9; END...10; RNK...5; CRG...10; FBL...9; SKL...10 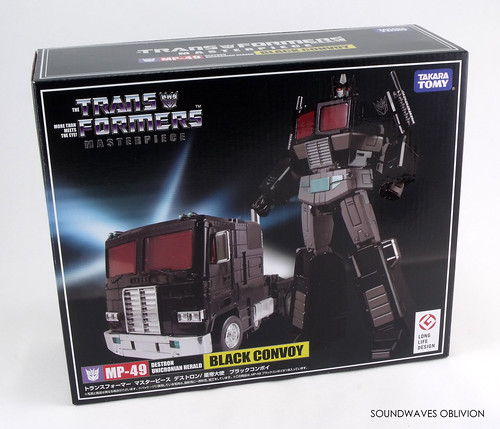 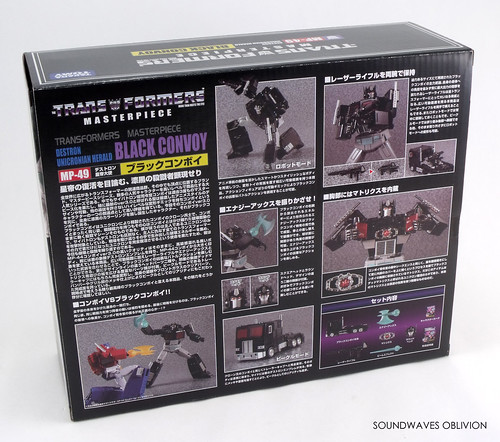 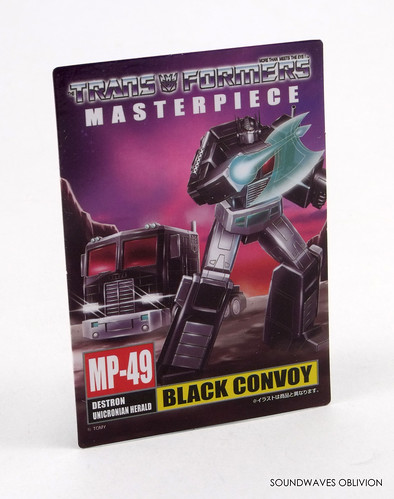 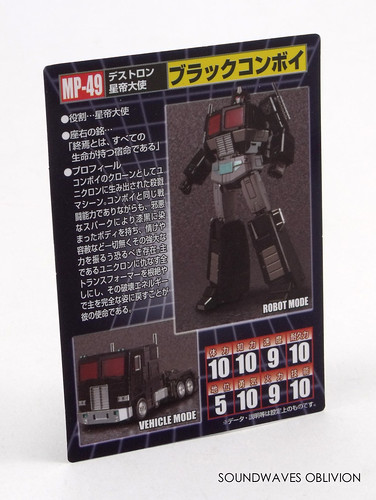 In November 2019, 2 images popped up on online retailers website, one a place holder image for MP-49 and the other a very pixelated image of the figure. MP-44 Convoy had only just been released in August 2019 so this announcement was rather underwhelming, although a Black repaint was inevitable, a more deserving character possibly should have been released instead. 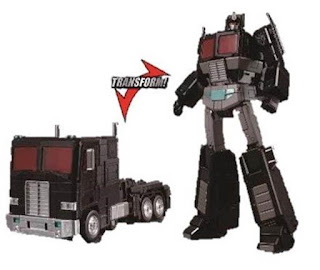 The first official images were revealed in December 2019 along with a reveal of the 22,000 Yen price tag. At almost half the price of MP-44, MP-49 allowed many fans who were put off by MP-44's price to own the mould. The official images revealed that MP-49 would only come with the Laser Gun, Blast Effect, Matrix, Energy Axe and additional head accessories. 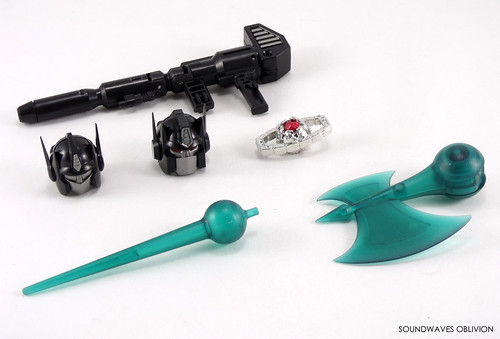 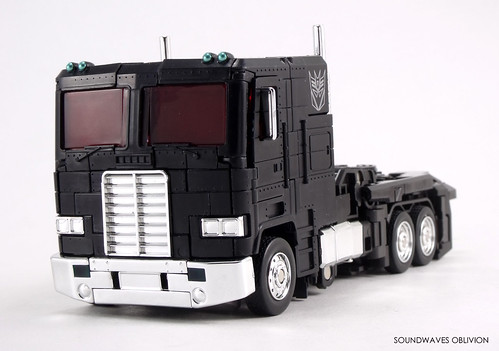 MP-49 Black Convoy was released in July 2020 and was packaged in vehicle mode. Straight out of the box MP-49 does not look as impressive as the original MP-10B from 2013 and this is due to the paint. MP-10B was painted in gloss black, MP-49 however is cast in black plastic. This does have its benefits (i.e. paint chipping) however it just does not look as impressive and for its price I thought it would have been painted. Although there is no trailer you can still hook up MP-44's trailer or you can just store the gun on the rear of the cab mode. Like MP-44 the faction emblem is not coloured but a white outline; this was cartoon accurate for MP-44 but as Black Convoy was never in the original cartoon I would have liked to see a purple Destron logo. 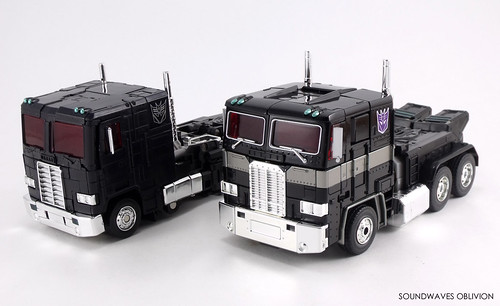 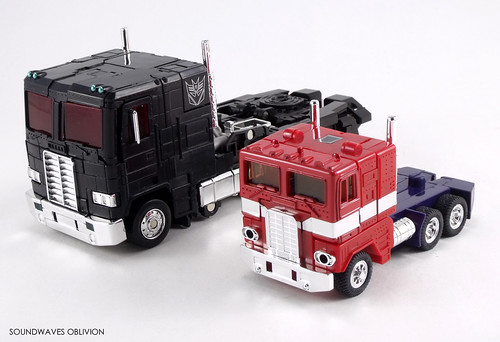 Both cab doors can open and you can seat in the small human figures that come with MP-44 Convoy or MP-45 Bumble. 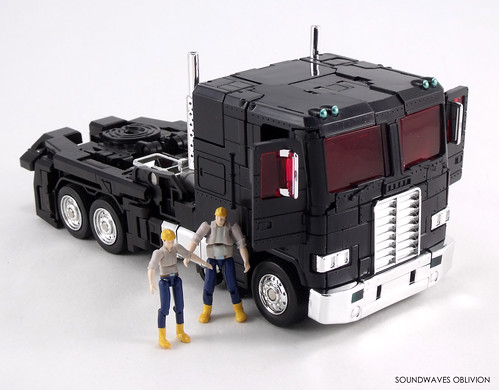 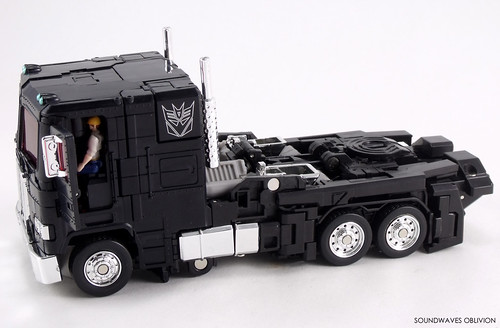 Transformation is identical to MP-44 and although it is long winded, it is not very complicated. I came unstuck when I tried to rotate the head out; for some reason the head was not connected to the ball joint on the neck so it took quite a while to rectify this. Other than this bit of poor QC I transformed it into the impressive robot mode. 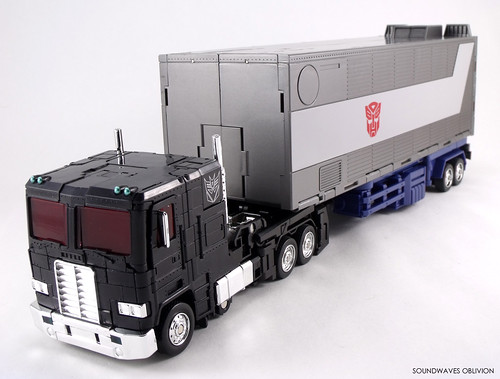 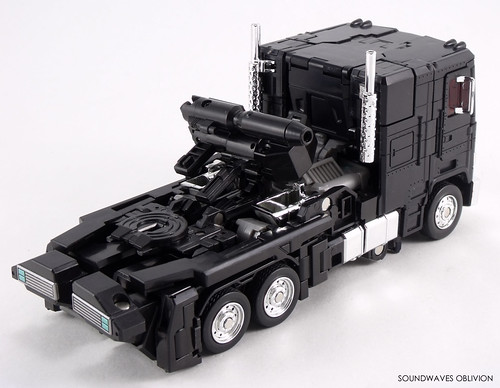 Where I said MP-10B looks better in vehicle mode, MP-49 is superior in robot mode. You don't even need to put the effort in to pose it, it just looks impressive whereas on the other hand MP-10B does show its age. 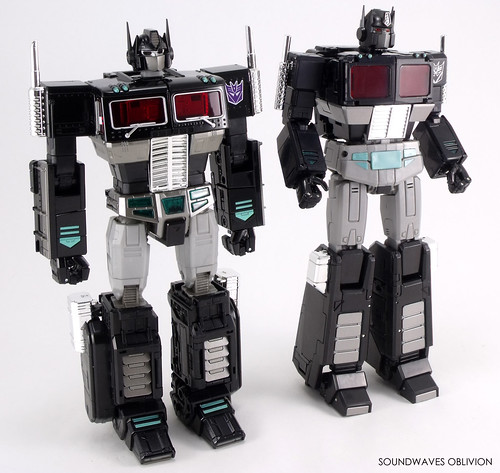 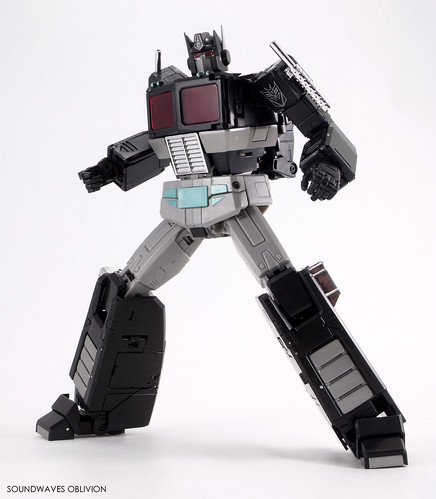 Robot mode does reveal mould differences from MP-44. The first noticeable differences are the lower knee joints which have been improved. Even after being careful with my MP-44 by rotating the top knee ratchets first before the lower knee ratchets the left knee of my MP-44 was unfortunately damaged. When I took it apart, the plastic was very soft. I haven't looked too closely at MP-49's knee joints but I was still weary of rotating those lower ratchets but in handling the figure you can tell they have been improved. 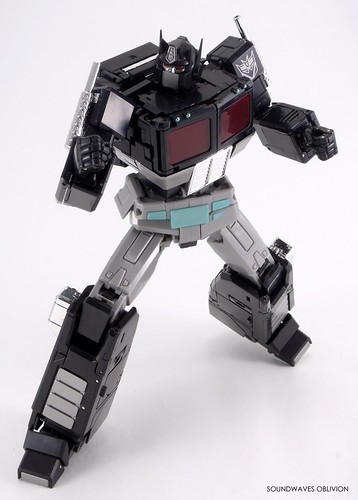 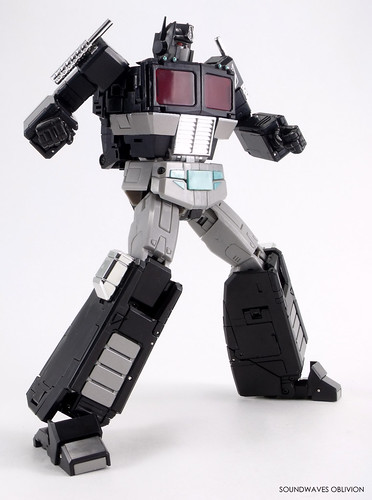 Another mould difference are the sound effects, the function has been completely removed from MP-49, so gone is the button on the back and the holes for the sounds. Another nice feature are the red eyes in comparison with MP-10B, as they are painted they can be seen unlike MP-10B where the eyes are made of a translucent dark red plastic which just look dark as there is no light piping. The antennae on the head are also made out of a stiffer plastic than MP-44's so they are straight and aren't bent like the original. Maybe down the line Takara Tomy will reissue MP-44 with the MP-49 mould with all the improvements? Overall MP-49 is an impressive upgrade to MP-10B, however I think the latter still holds its own with the glossy black paintwork. 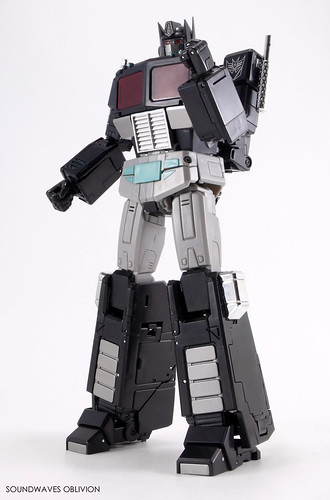 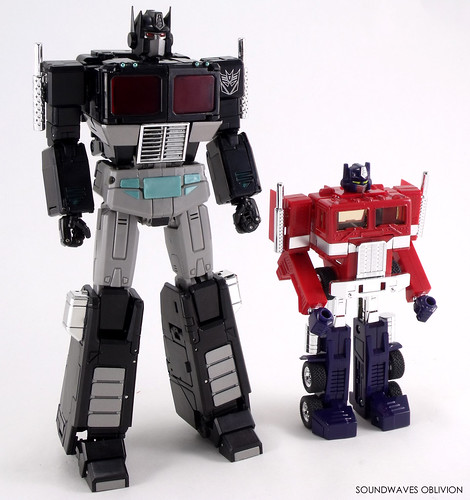 Unfortunately there is no extended bio in MP-49's booklet but if you are interested in the characters background you could visit MP-10B Black Convoy's entry here. 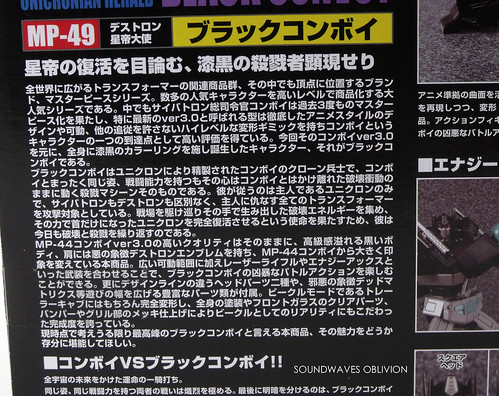 A jet-black assassin has appeared and plots the resurrection of the Star Emperor.  (Translated from the back of the box)
Transformers have spread worldwide with the Masterpiece series as the pinnacle of the brand. Incredibly popular, this series recreates popular characters to a very high standard. The Cybertron Commander Convoy has had three Masterpiece figures in the series so far. The latest, Ver 3.0, exceeded its predecessors and gained a reputation with the impressive animation design, incredible articulation and a high-level transformation. Black Convoy, a character created with a jet-back body, is now based on Convoy Ver 3.0. Black Convoy is a clone of Convoy created by Unicron, and although he shares the same appearance and combat abilities as Convoy, he is a ruthless killing machine which couldn’t be further from Convoy. He only follows his master Unicron, and targets Transformers regardless of whether they are Cybertron or Destron. He continues the slaughter and destruction on the battlefield, collecting the destructive energy he generates in order to revive the disembodied Unicron. Maintaining the high quality of MP-44 Convoy ver 3.0, the luxurious black body coupled with the evil Destron emblem certainly changes the impression from the original MP-44 Convoy. You can take part in Black Convoy’s ferocious battles using his laser rifle and battle axe together with his incredible articulation. In addition you also get two heads in differing styles as well as the Dead Matrix, the symbol of evil. You can of course transform it into its trailer cab vehicle mode which boasts realistic styling with clear windshields and a chromed grille and bumper. We hope you appreciate the charm of this figure which could be considered to be the best Black Convoy at this moment in time. 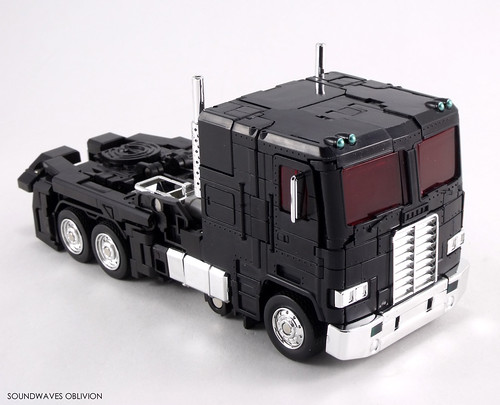 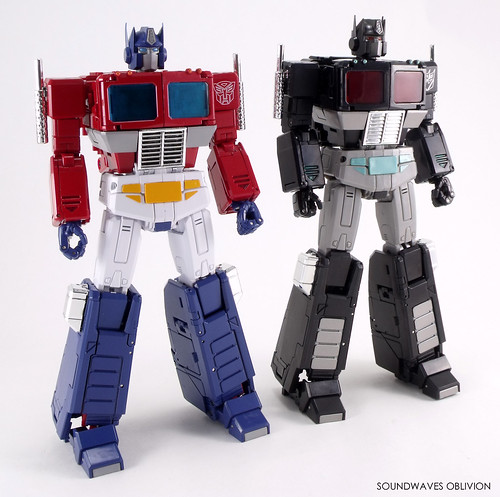 Ability: Transform (Translated from the instruction booklet)
When arriving on other planets, Transformers scan domestic vehicles and change their form allowing them to fit in unnoticed to avoid any unnecessary turmoil or conflict. However, Black Convoy did not scan an Earthen vehicle, and as a clone of Commander Convoy by default he was a trailer truck. From the beginning, due to his destructive nature Black Convoy has no intention to blend in, however he does use his vehicle mode to mimic Commander Convoy. 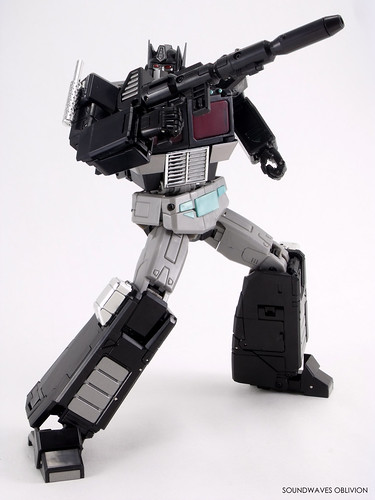 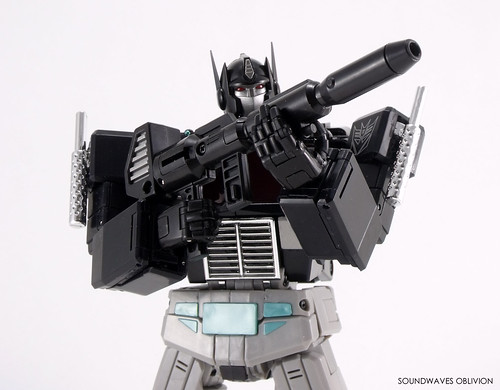 Weapon: Laser Rifle (Translated from the instruction booklet)
The handheld Laser Rifle is Black Convoy’s primary weapon. It is nearly identical to Commander Convoy’s Laser Rifle but with Black Convoy’s impulse to destroy, he keeps it on maximum output. He completely disregards the damage it could do to his nearby surroundings as well as to his own body. Its power can topple a medium sized Transformer with a single blast. He usually stores the rifle on his back but he will always wield it in battle. Once he takes aim he turns his surroundings into a scene of hell with its awesome firepower. 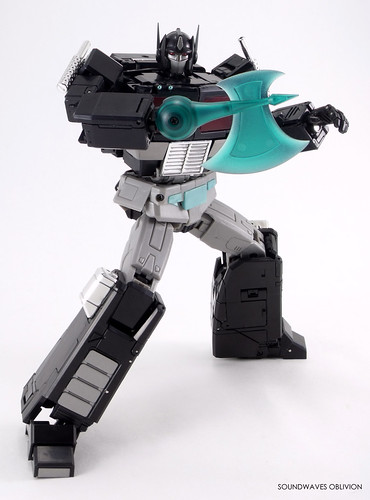 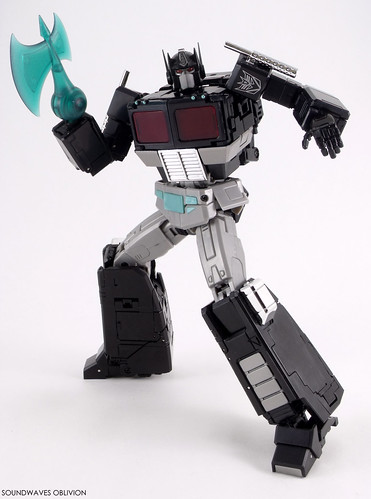 Weapon: Energy Axe (Translated from the instruction booklet)
As a clone of Commander Convoy as well as sharing the same appearance, he also shares the same fighting ability. Just like Convoy he has the ability to concentrate the energy that flows through his body and project it as an energy axe on his right arm. Black Convoy is a killing machine who enjoys slicing through his opponents with his axe. One after another, those who block attacks from his vicious blade are turned into scrap metal. The moment he tears apart his prey, he feels a justification for his existence. His prime target is none other than the head of Commander Convoy. 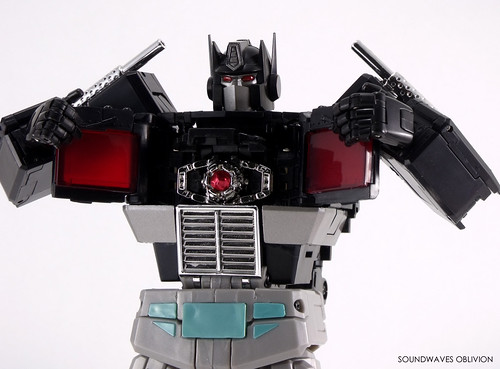 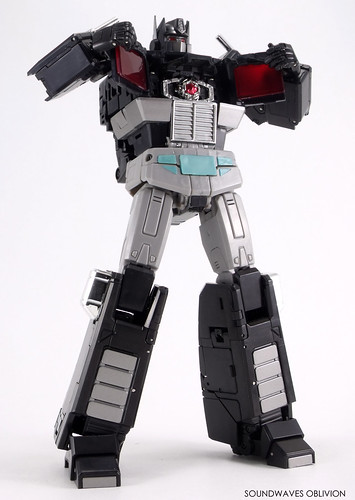 Item: Matrix (Translated from the instruction booklet)
The Matrix is proof of a Cybertron leader, it is a crystal which is housed in Commander Convoy’s chest. Black Convoy, a clone of Commander Convoy, also has an object which resembles the Matrix in his chest. Although it looks like the Matrix, its power is the exact opposite of the original Matrix which destroyed Unicron. This Matrix has the power to completely restore the disembodied Unicron. It’s name is the Dead Matrix. The destructive energy unleashed by Black Convoy is stored in the Dead Matrix and once it's completely filled, Unicron will be revived. 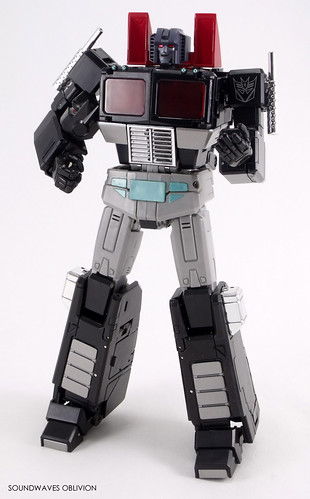