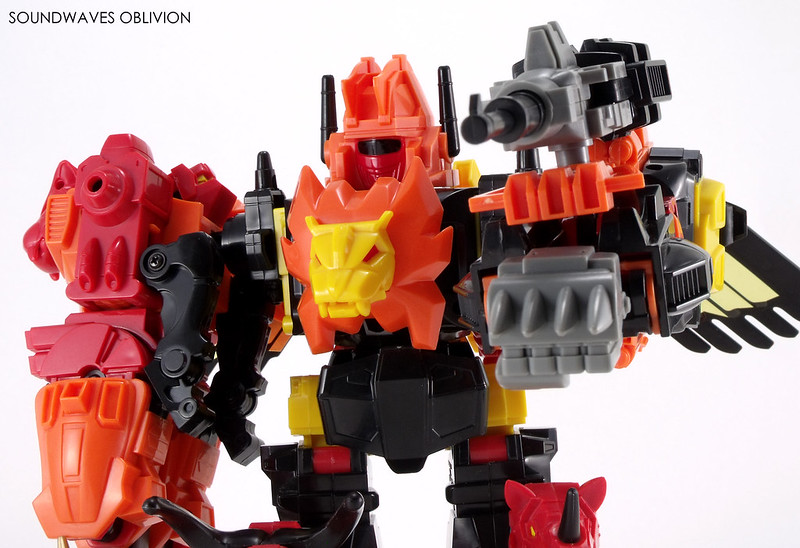 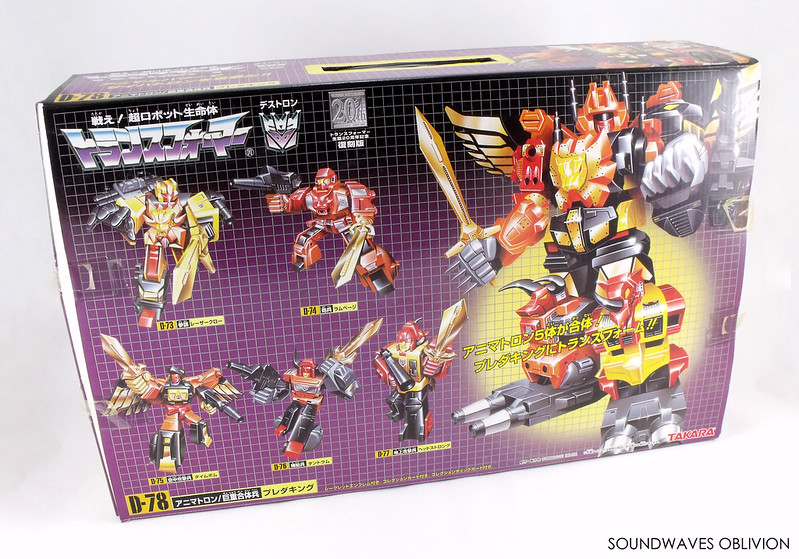 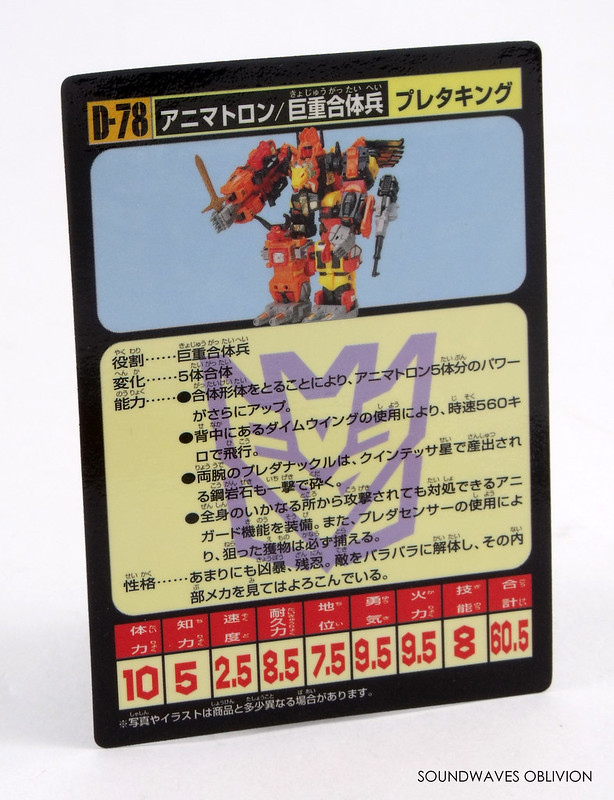 Predaking was first reissued and released in Japan at the beginning of December 2004 retailing for 14,700 Yen ($138 USD / £112). The giftset is near identical to the 1986 release which, as with this version, only saw a Japanese release. At the time this was a much welcome reissue seeing as Predaking was one of the most sought after figures and was very expensive to get hold of on the secondary market. The first time I came across Predaking was in the Transformers UK comics where I purchased a 1989 Summer special which was a collection of the "Prey" story line from 1987.

Hasbro's original release of the Predacons came with diecast metal parts, the later releases were all plastic. The Japanese versions (both the Predaking giftset and the individual boxed releases) were only released with all plastic parts. 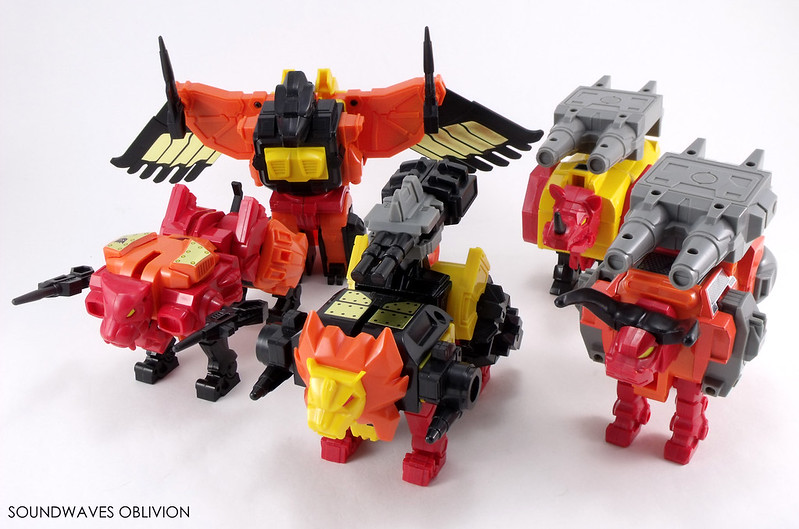 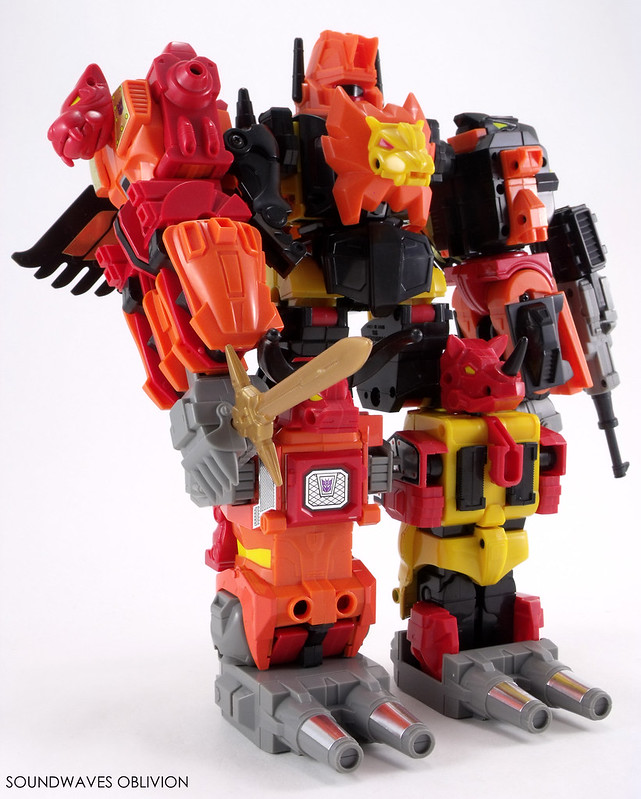 Before the reissue was released it was rumoured, or more likely assumed, the set would be all plastic (much like the original Japanese release from February 1987) however the reissue does include diecast metal. The reissue boxset also came with a cardboard checklist featuring the G1 reissues, Binaltech figures and the stand alone (at this time) Masterpiece MP-1 Convoy.

Unlike the other combiners released in 1986, Predaking is very different and this may be due to Predaking being designed specifically for the Transformers toyline. The Scramble City combiners were designed and planned to be released in a 1985 Diaclone sub-line entitled "Free Combination" (also including Metroplex). Predaking was designed by Akitaka Mika, an interview with him from Animeexpo 98 can be found here. This design may have intended to have been used in the Transformers the Movie as an early draft of the script coincidentally includes 5 very similar robotic animals called Anibots who were Autobots (Simba the lion, Shriek the eagle, Clump the rhino, Thump the buffalo and Pardo the leopard) however the Anibots combined into a large dragon, the "Mechano Beast" rather than a humanoid figure. The dragon was scripted to fight Devastator. 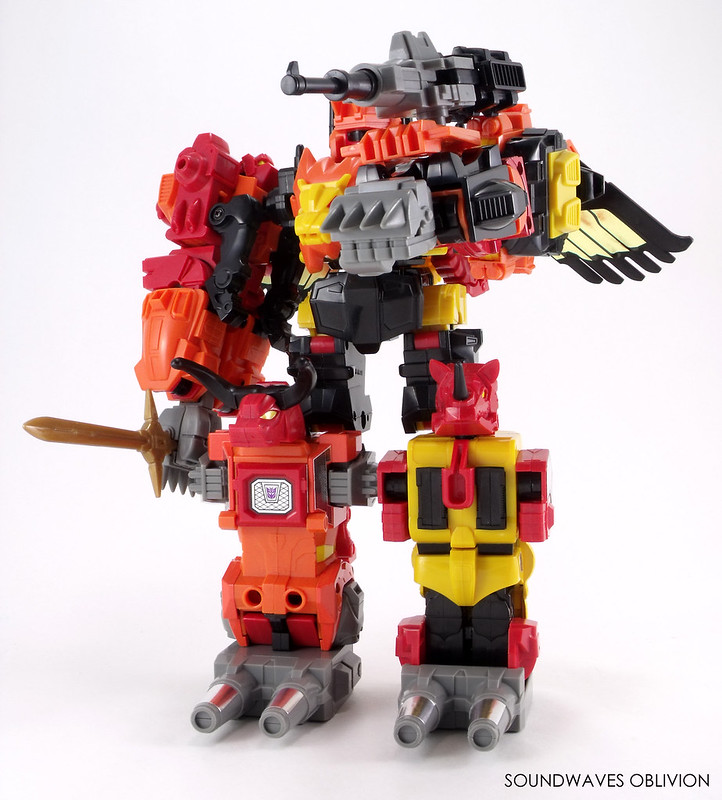 The Anibots became Decepticons and were renamed Predacons (or Animatrons in Japan). The individual Predacons are large and bulky figures themselves with each of them a similar size with one another unlike the Scramble City combiners  who feature a larger robot to form the torso and much smaller robots who form the interchangeable limbs. Due to this the combined form of Predaking does seem cumbersome but overall it's impressive due to its size. Articulation wise the arms can rotate at the shoulder and the arms can bend at the elbows (which are the individual robot waists) and the fists can rotate. 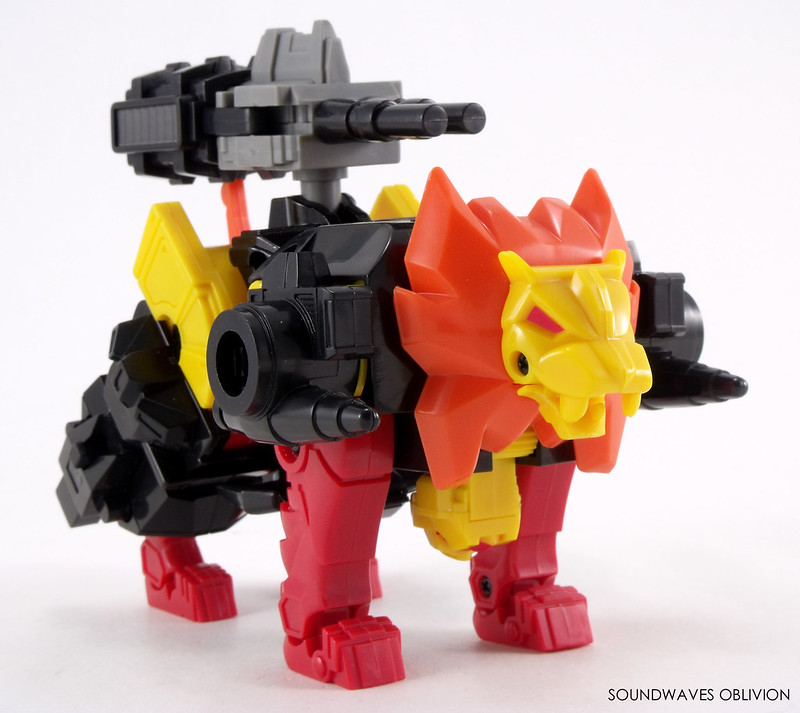 Profile (Translated from the Trading Card)
D-73 Animatron / Staff Officer Razorclaw
Function: Animatron Staff Officer
Transformation: Lion
Ability: Has incredible jumping ability in lion form, can easily leap over a stadium. His claws can tear through 32cm thick steel plate. Combines with fellow Animatrons to form “Predaking”.
Character: Always calculating to remove the need of waste.He therefore will not take any action until he is sure he will get the result. For this reason fellow companions think he is being negligent until he suddenly springs into action.
Weapons: Double Shock Gun, Sonic Blade
STR…8; INT...9; SPD...4; END...9.5; RNK...8; CRG...10; FPR...7; SKL...7; TTL...62.5 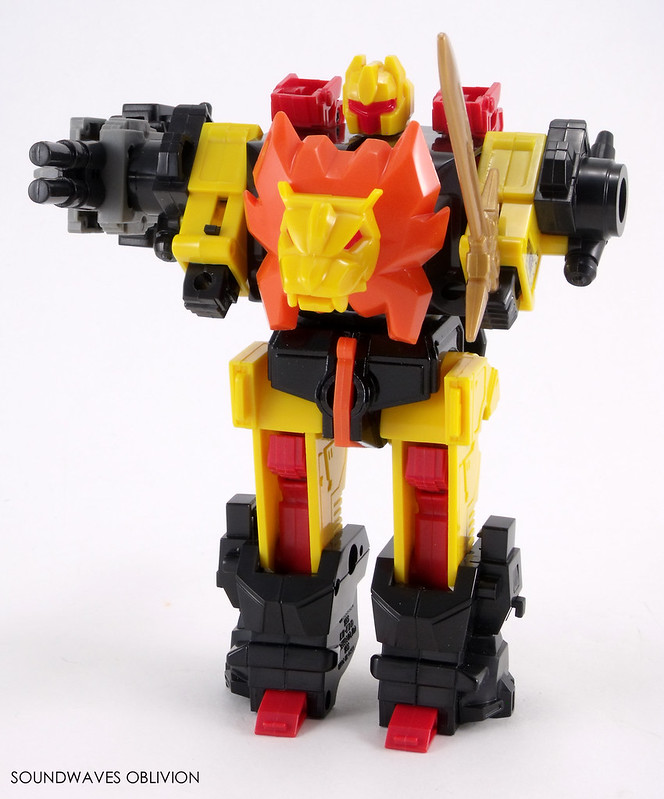 Razorclaw is the leader of the Predacons / Animatrons and transforms into a lion as well as Predakings torso. In robot mode, Razorclaw has the oddest proportions with a small head and very stubby arms; the lion mode on the other hand is very good and bulky. One of the problems with Razorclaw however is with the transformation. If you have applied stickers on the lions back, when the lions head slides over the stickers when transforming into robot mode, it will rub them causing wear. 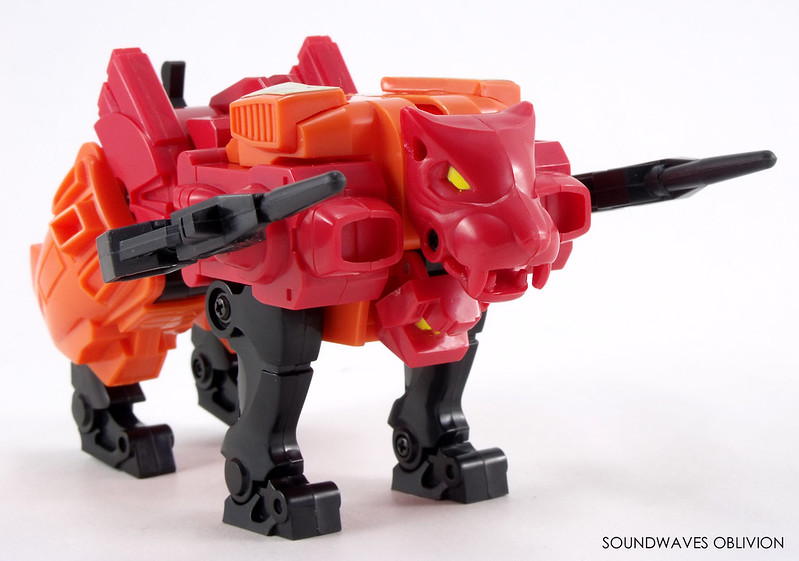 Profile (Translated from the Trading Card)
D-74 Animatron / Gunner / Rampage
Function: Gunner
Transformation: Tiger
Ability: In his tiger mode he can jump to a height of 91 meters and a distance of 152 meters. The kick from one of his forelegs in tiger mode can destroy an alloy wall. Combines with fellow Animatrons to form “Predaking”.
Character: Violent and quick to uncontrollable anger, even attacks his companions; however watching television calms him. Especially enjoys rock music videos and will sit and watch them for hours.
Weapon(s): 60,000 volt Lightning Rifle, 5000 degree Thermo Sword
STR…8; INT...3; SPD...5; END...6; RNK...5; CRG...9; FPR...9; SKL...6; TTL...51 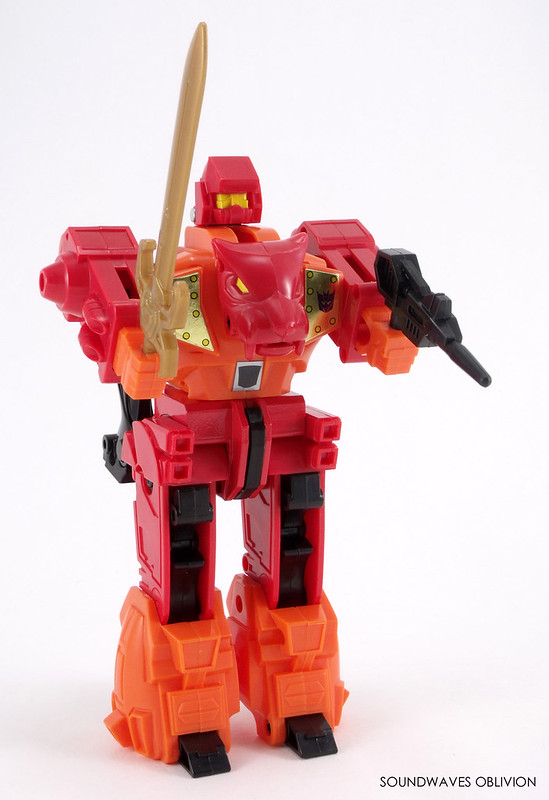 Rampage transforms into a tiger and in robot mode he has probably the best proportions out of the Predacons. Rampage also shares a similar transformation with Razorclaw. Rampage also transforms into Predakings right arm, attaching the fist is quite fiddly as it slots into holes on the inside of Rampages legs. 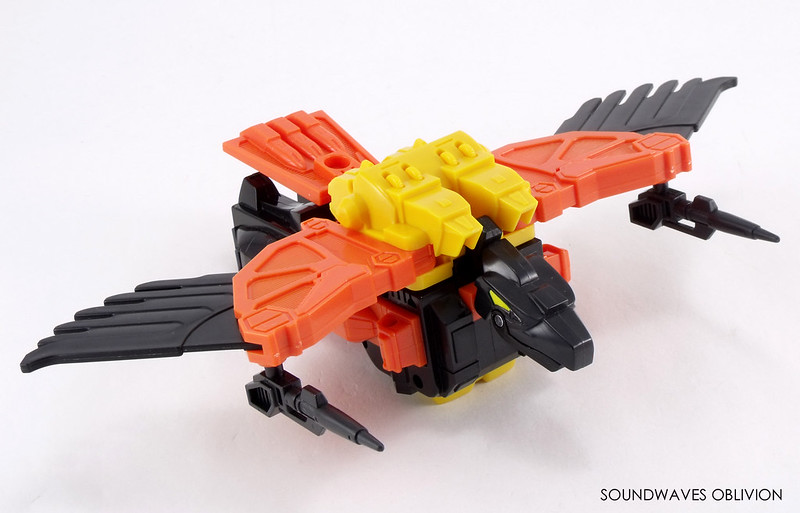 Profile (Translated from the Trading Card)
D-75 Animatron / Aerial Attack Soldier Divebomb
Function: Aerial Attack Soldier
Transformation: Eagle
Ability: Top speed of 480 km/h. Can capture enemies at a distance using radar with a 3200 km radius and can spot a coin from 3000m. Combines with fellow Animatrons to form “Predaking”.
Character: Ambitious and gets excited as a child with targets both in the air and on the ground. Builds mecha nests on top of buildings or mountain peaks made up of car and airplane parts.
Weapon(s): Laser Rifle with Infrared Scope, Laser Sword
STR…7; INT...7.5; SPD...6; END...7; RNK...6; CRG...7.5; FPR...7; SKL...6.5; TTL...54.5 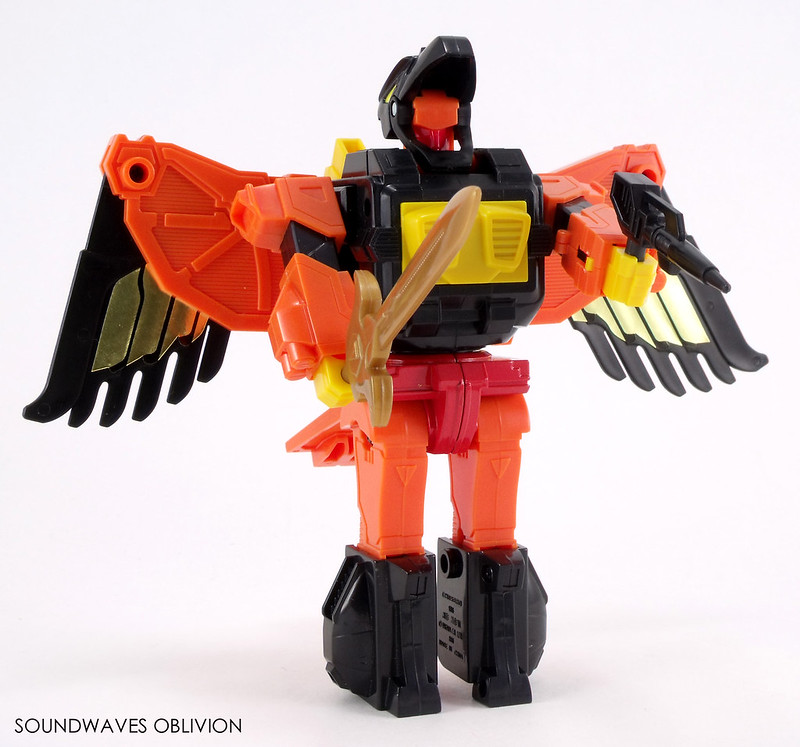 Divebomb is the odd one out of the group transforming into an eagle. In eagle mode you can either lie him down or stand him up. Divebombs wings can fold down up upwards and can also detach from his back to fit on the back of Predaking. Divebomb also transforms into Predakings left arm. Much like Rampage, attaching the fist is fiddly to do. 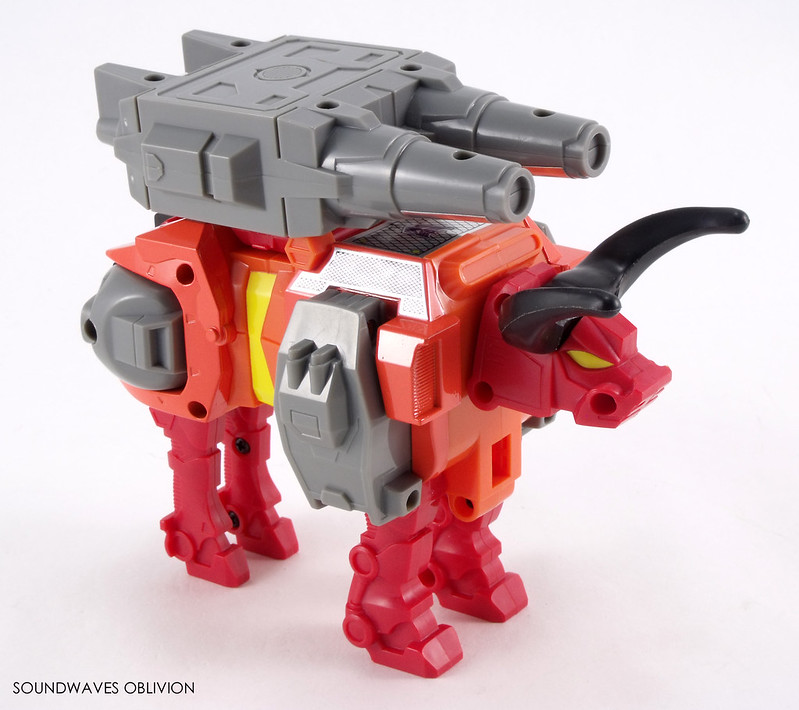 Profile (Translated from the Trading Card)
D-76 Animatron / Fueler Tantrum
Function: Fueler
Transformation: Buffalo
Ability: Has 4 fuel tanks, with a capacity of 6,056 litres to replenish himself and his comrades. Each of his horns can emit bolts of 20,000-volt electricity. Combines with fellow Animatrons to form “Predaking”.
Character: Angry, enjoys violence so much he feels its gives him more energy than fuel does. Destroys buildings to vent his anger. When he gets angry, steam blows out of his nose.
Weapon(s): Catalytic Carbine, Electro Sword
STR…8; INT...4; SPD...3; END...8.5; RNK...5; CRG...9; FPR...8; SKL...6.5; TTL...52 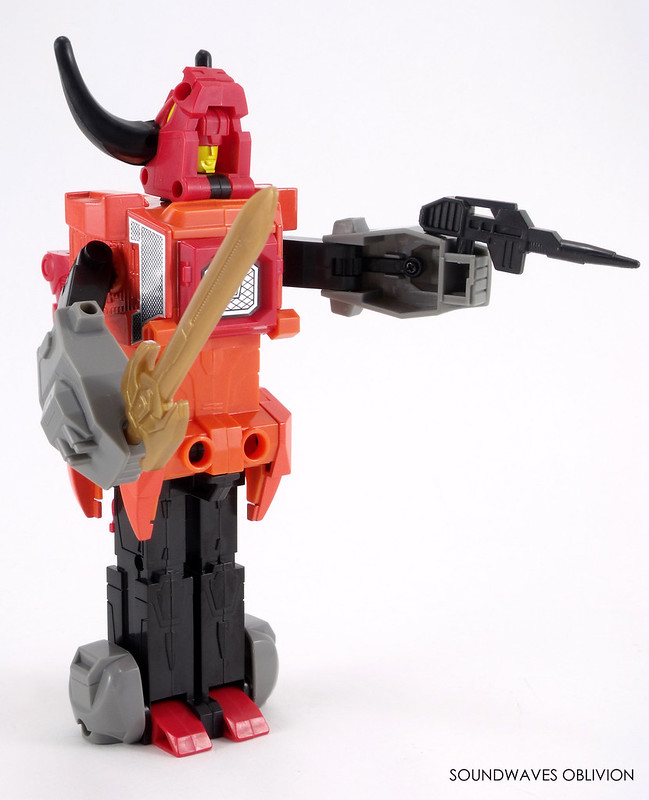 Tantrum transforms into a Buffalo and forms the right leg of Predaking. Transformation is quite easy but the clearance to turn the head switching between modes is quite tight. Articulation in robot mode is really limited to the arms but Tantrum is the only Predacon who can move his head although this is really part of the transformation. When Hasbro reissued Predaking 9 years later in 2013 Tantrum was renamed "Predacon Torox", with Torox being Tantrums Italian name when originally released through GiG. Tantrum is quite heavy as well with the back of the buffalo mode being made out of diecast metal but the heavy legs are certainly required to keep Predaking standing upright as when combined it has some heft. 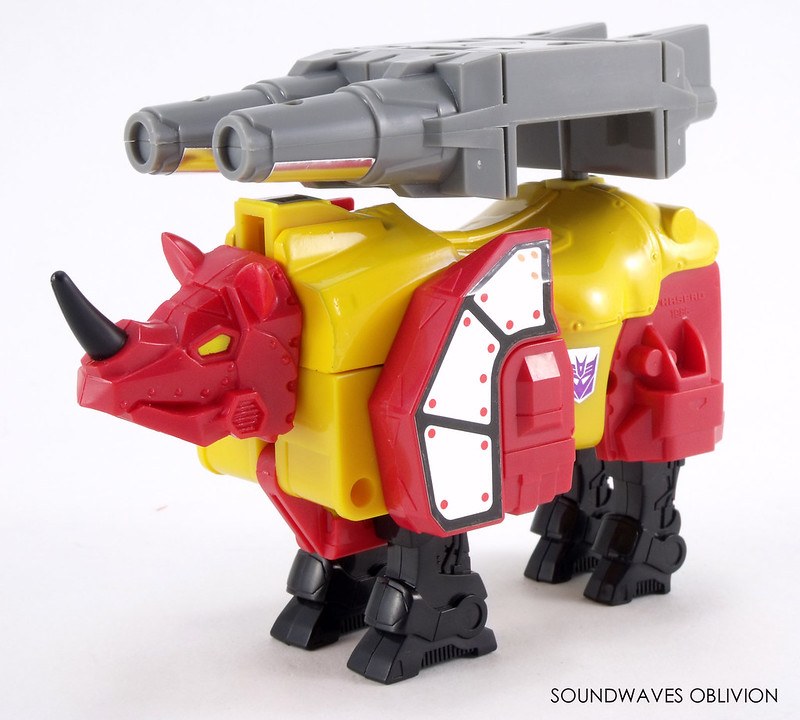 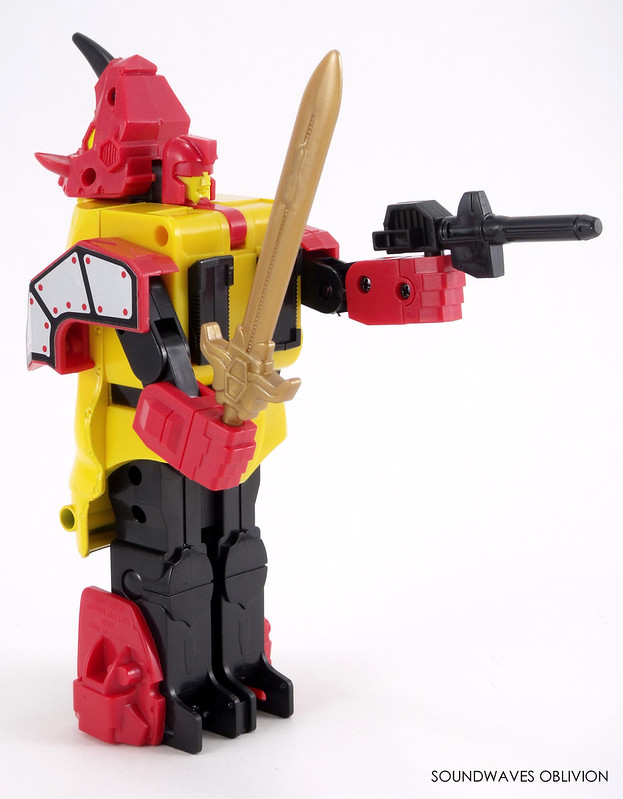 Headstrong transforms into a rhinoceros as well as Predakings left leg. Much like Tantrum Headstrongs back section is made out of diecast metal so is one of the heavier Predacons. Out of all the Predacons however, Headstrong has the weakest articulation with his arms only being able to move up and down; there is a bend in the elbow but this is part of the transformation. 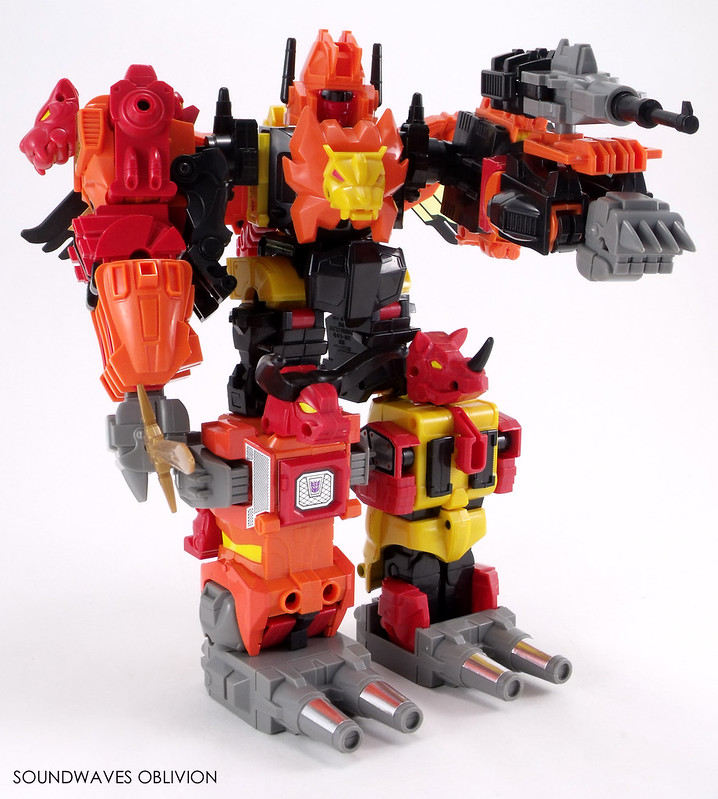 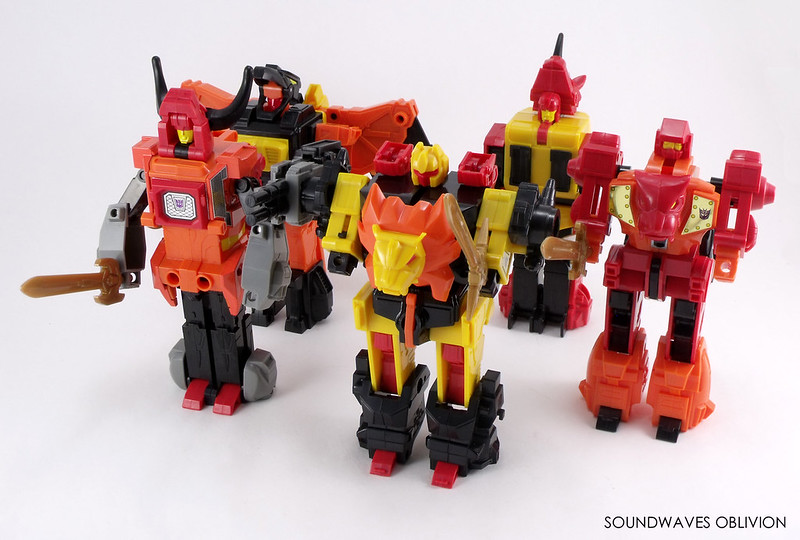 View the full gallery here on Flickr.com
Posted by Jeremy Barlow at 16:16