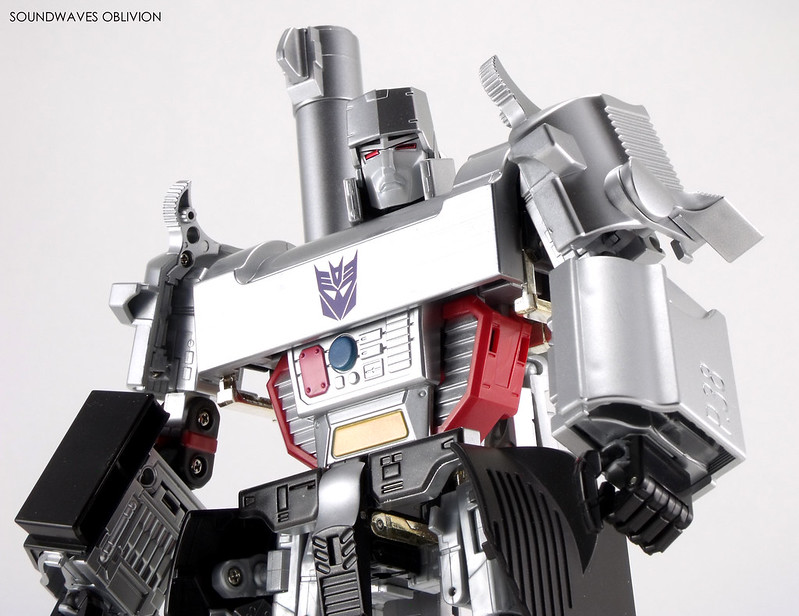 Profile (Translated from the Trading Card)
MP-5 Destron Emperor of Destruction Megatron
Function: Destron Emperor of Destruction
Motto: "Peace through tyranny."
”Everything is fodder.”
Profile:
Megatron combines ferocious power and cunning, he does not know the meaning of the words love or compassion. Plans to overthrow the Cybertron warriors on Earth and wishes to return and rule Planet Seibertron with the Destrons. Harbours ambitions to seize control over all of Earth's resources.
STR:10; INT:10; SPD:4; END:8; RNK:10; CRG:9; FPR:10; SKL:9 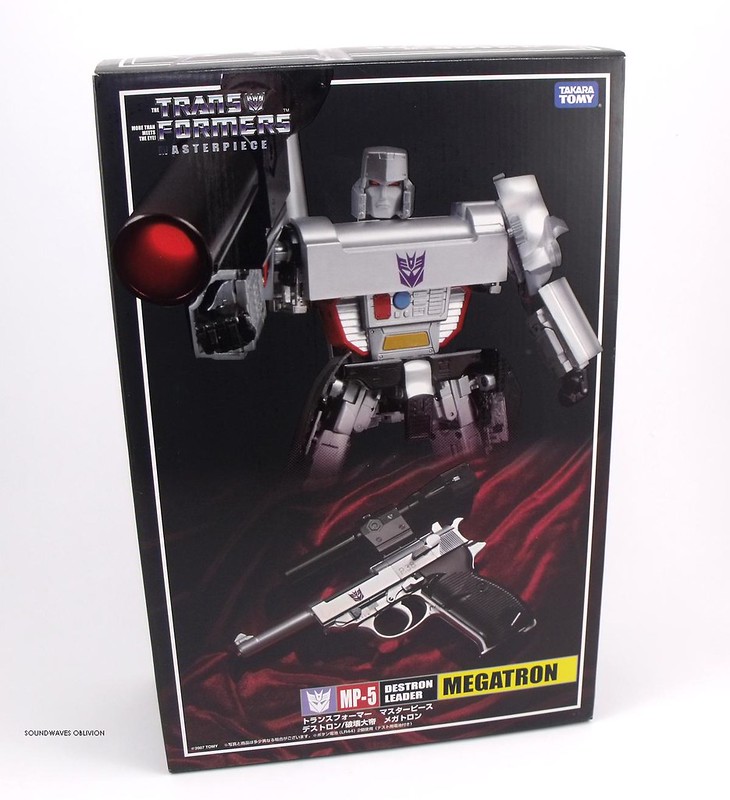 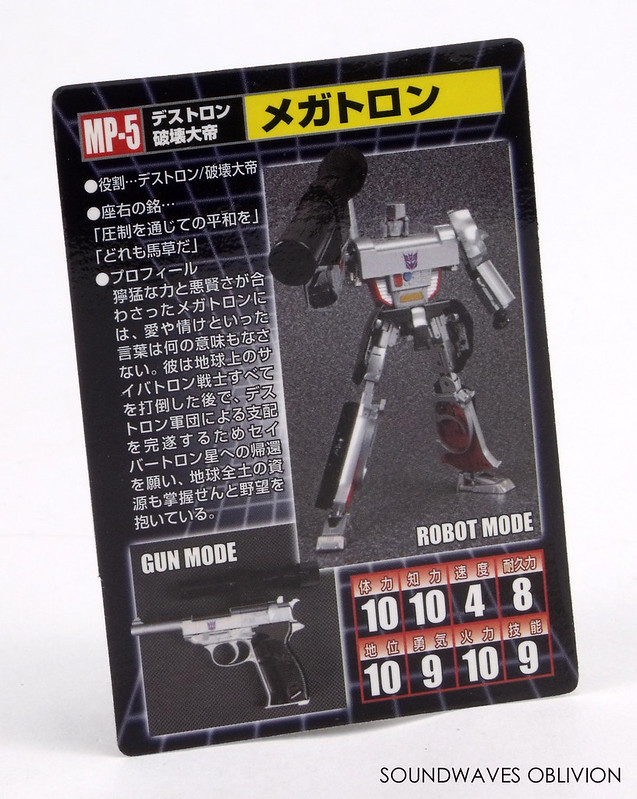 MP-5 Megatron was released on the 29th March 2007 and retailed for 9,800 Yen ($90 USD or £75). Prototype images started to appear around November 2006, one of the first was taken at a toy show with MP-5 Megatron on display in robot mode with figure stands to prop Megatron up. The main criticism of the figure were the thin legs.


MP-5 Megatron was designed by Hisashi Yuki who gave a few details about the design process for Megatron in a 2014 interview (link here) where he was also discussing his design for MP-24 Star Saber. In the interview he says he was given 12 days to design Megatron and was not initially told what size Megatron should be. Megatron was eventually scaled on MP-1 Convoy and would ultimately transform into an oversized Walther P-38 Pistol. Like MP-1 Convoy came without his trailer (fixed with MP-4), Megatron also lacked his gun extensions, namely the stock and scope. This was possibly to keep the cost down and Takara may not have seen it as a requirement seeing as the original Megatron released in Japan did not come with those accessories either. 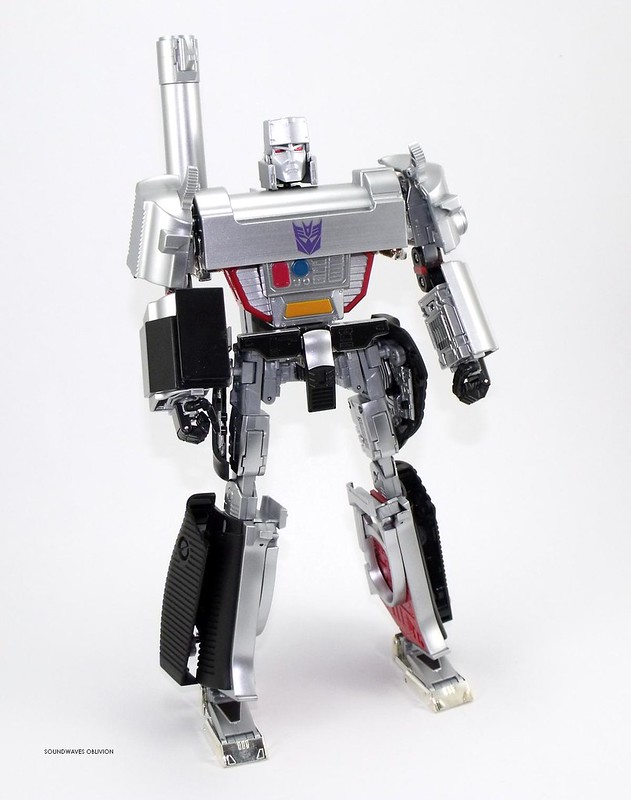 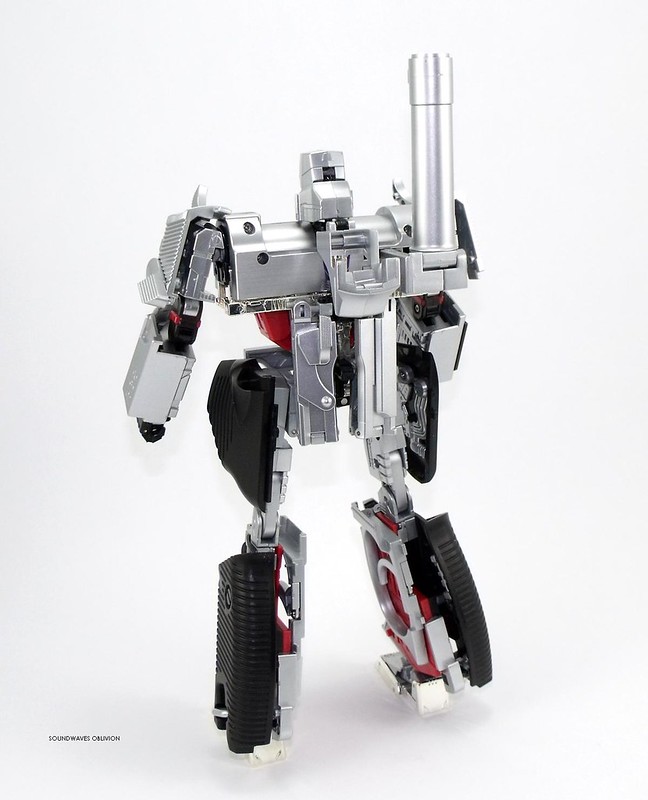 The accessories Megatron did come with were the Energy Mace from the second episode "More than Meets the Eye Part 2 / Secret of the Ruby Crystals" a similar one also came with the 2002 Transformers Collection reissue Megatron, a Laser Gun and Energy Saber which were seen in the 1986 Movie. A small translucent yellow figure of Kremzeek from the episode "Panic the Kremzeek!" also came with Megatron, a similar one was released with Autorooper in the questionable Kiss Players line in 2006. Megatron also came with his fusion cannon which was also fitted with a red LED light. This fusion cannon is oversized and far too big not to mention heavy which makes posing Megatron incredibly difficult and frustrating to do. Not to mention the double jointed elbows are only friction joints so the arms are not strong enough to pose Megatron aiming the cannon. Additionally the feet are on weak joints furthermore impacting on the figures ability to stand without toppling forwards or backwards. 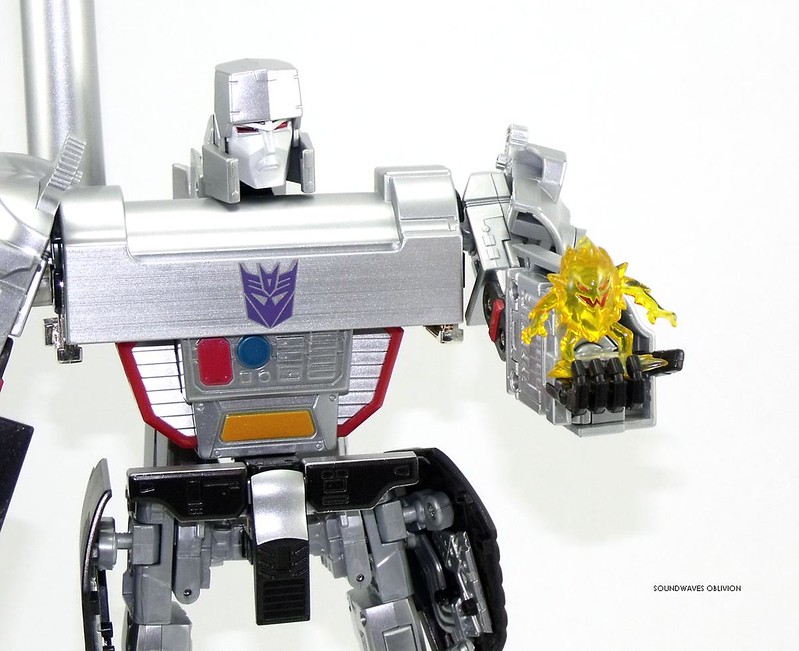 Megatron comes packaged in robot mode and at the time did look very impressive, it certainly would not be fair to compare this Megatron with MP-36 Megatron. Given that this Megatron was designed in 12 days it is even more impressive, however it does show in the design as the transformation borrows heavily from the original G1 Megatron. Megatron's face does not quite pull off the look from the cartoon which is unfortunate seeing as the initial design appeared quite faithful. 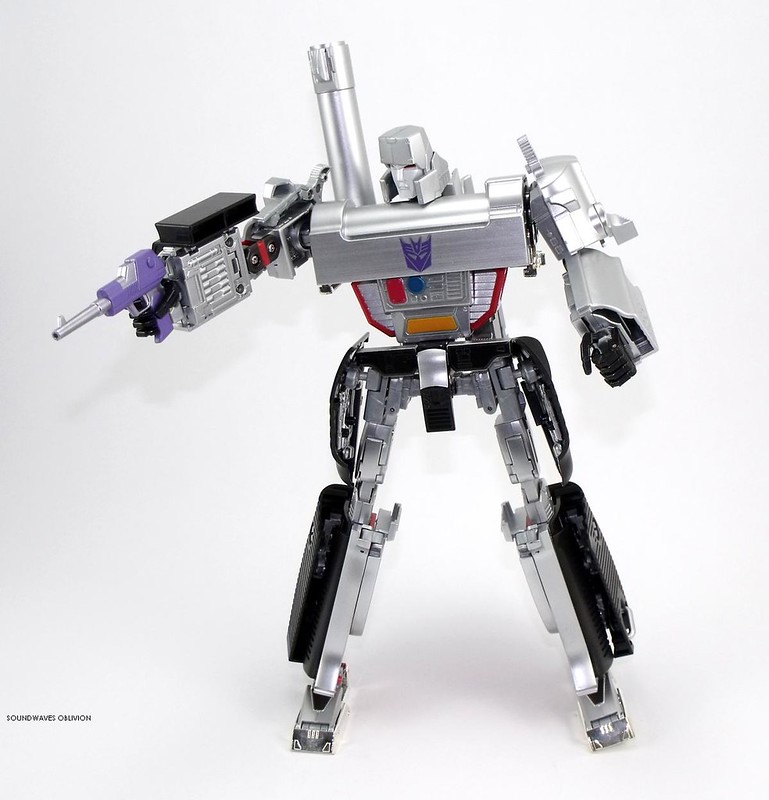 The back of the box does say the transformation of Megatron is challenging and this is an understatement. MP-1 Convoy is a solid figure with an easy transformation, in comparison Megatron is incredibly complex not to mention you have to be careful not to apply too much pressure or you will easily break this figure especially one or two of the many small clips. Additionally the hip pieces and shoulders have a tendency to pop off as they are on ball joints, however Megatron is much easier to transform with these removed. 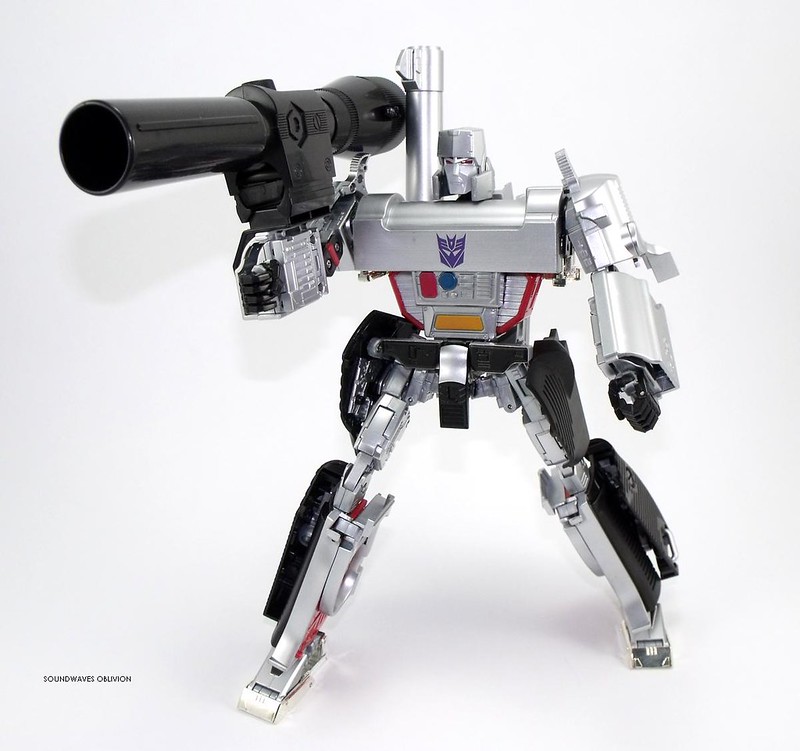 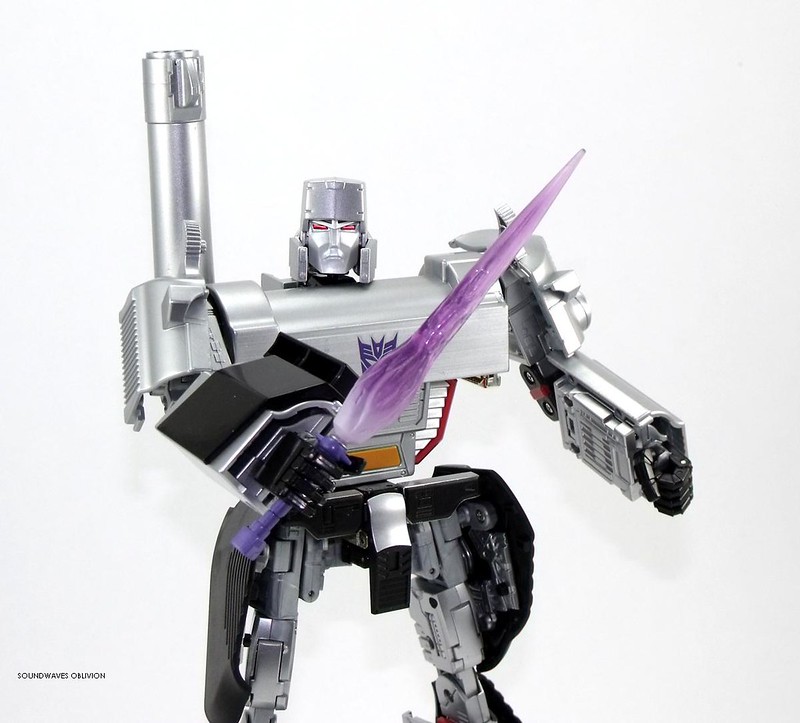 In gun mode Megatron is a faithful reproduction of a Walther P-38 pistol, albeit a little oversized and this is where this particular Masterpiece has leverage over MP-36 Megatron. Although MP-36 comes with the stock and silencer it has a lot of panel lines where MP-5 looks clean cut in comparison. The brushed silver looks very nice and the grip even has a lanyard loop which was only a moulded detail on the original G1 version. The safety lever can be moved and the trigger is also movable. The scope can be mounted on gun mode however its large size can be jarring to look at. 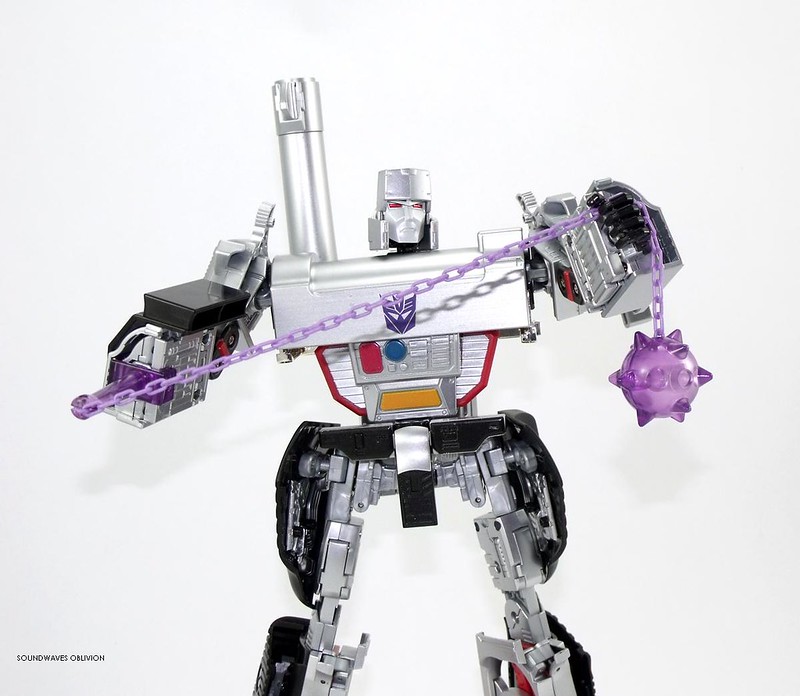 Considering the time scale for this figures design and the size it needed to be, it is a wonder that this figure turned out the way it did. Back in 2007 this was the best representation of G1 Megatron we had which has since changed with the introduction of MP-36. This figure is certainly not without its faults and was certainly not deemed popular considering the only other re-release of this mould was the Asian exclusive gold version 7 years later in 2014. Another thing to note is that the diecast parts will tarnish over time turning a yellow / gold colour. 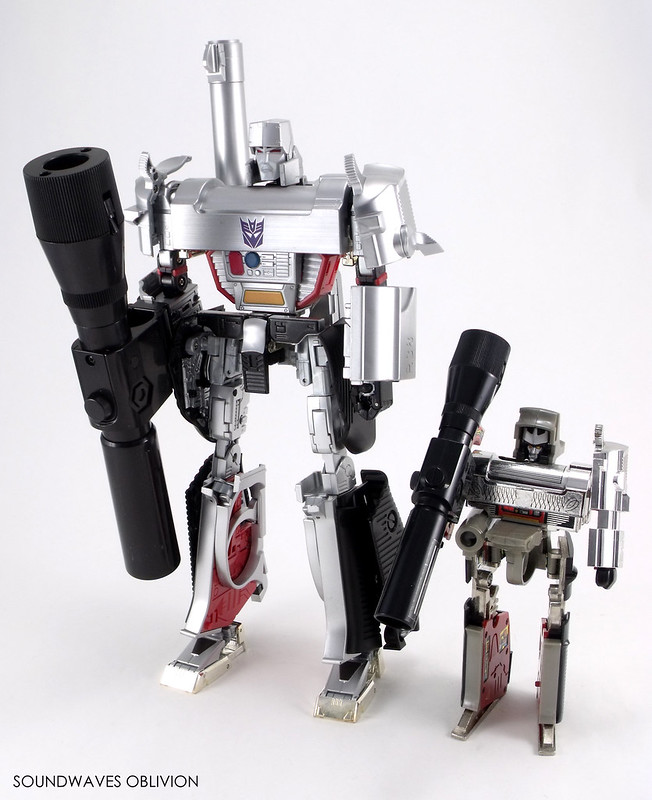 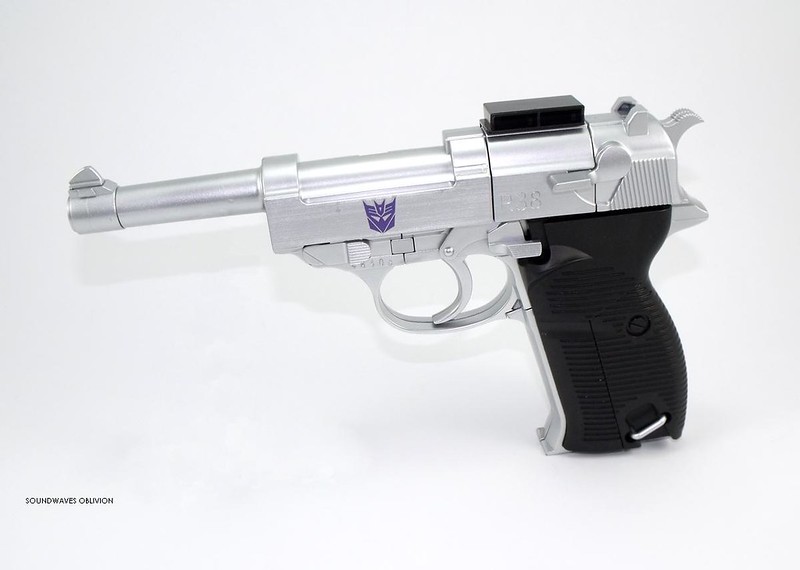 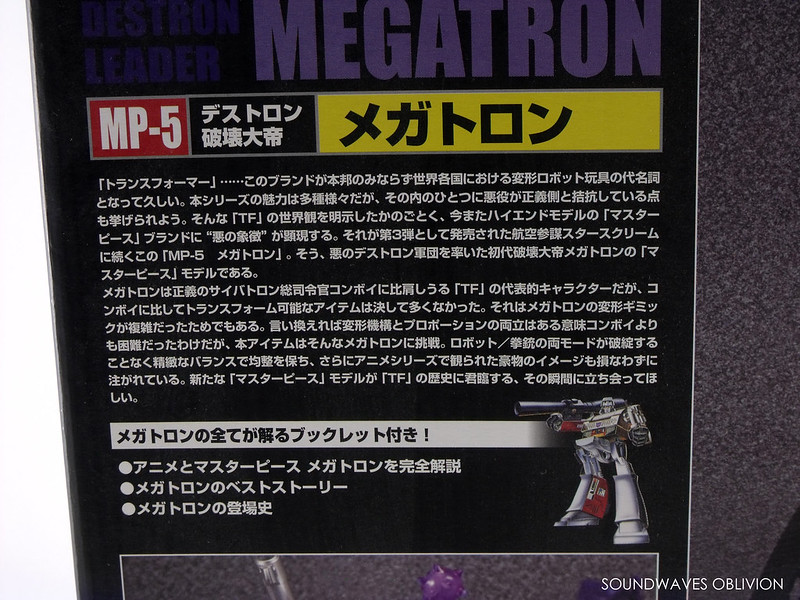 (Translated from the back of the box)
“Transformers”.......This brand has been representative of transforming robot toys not only in Japan but also globally. The series has various charms, one of which is the battle between good and evil. To clarify this view on the world of the “Transformers”, a symbol of evil has appeared within the high end “Masterpiece” brand. “MP-5 Megatron” follows the third release of Air Commander Starscream. Yes, this is the “Masterpiece” figure of the first Emperor of Destruction, Megatron, who led the evil Destrons.
Megatron is an iconic Transformer character, an equal to Cybertron General Commander Convoy, however there haven’t been many Megatron figures who could be transformed as easily as Convoy. This is because Megatron’s transformation is complicated. This is because the balance between the figures proportion and transformation gimmick is more difficult to achieve compared to Convoy. This Megatron offers a challenge. Both robot and handgun modes are kept in a precise balance and flawlessly represent Megatron as seen in the cartoon. A new “Masterpiece” figure has stepped into Transformers history. 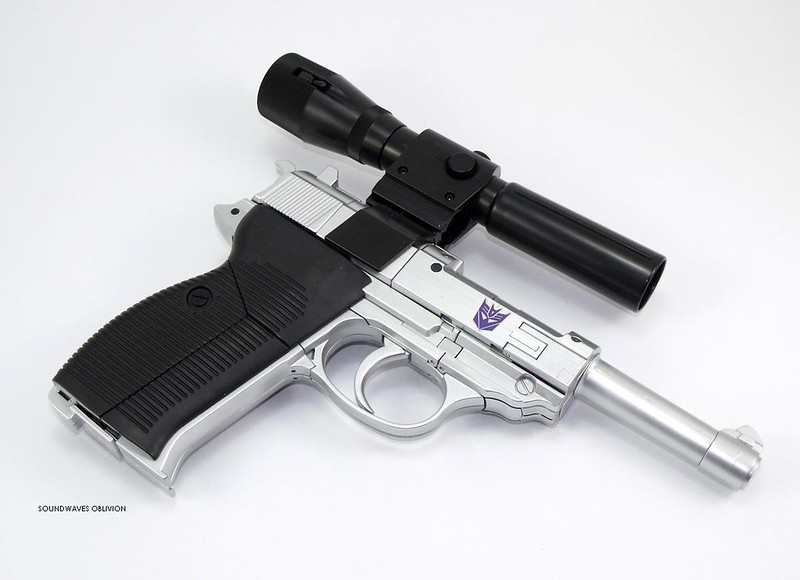 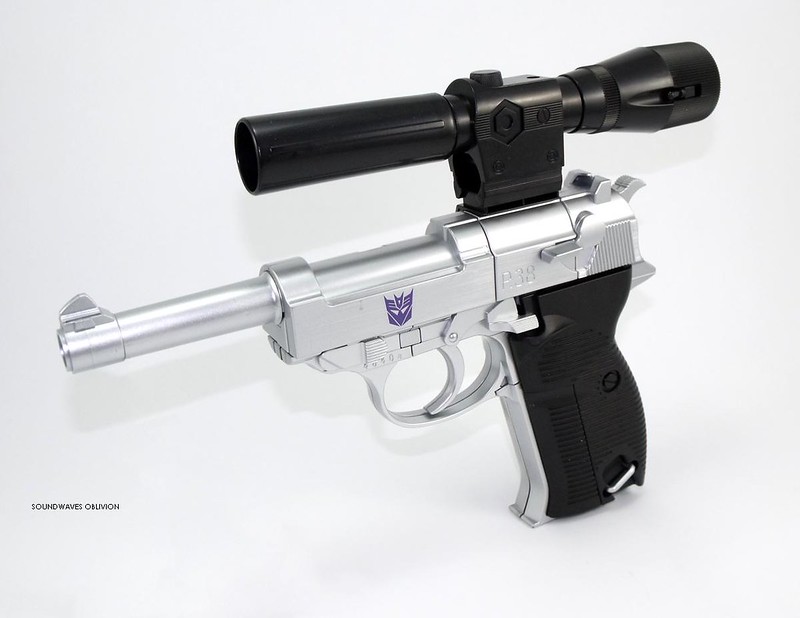 The below is translated from the instruction manual: 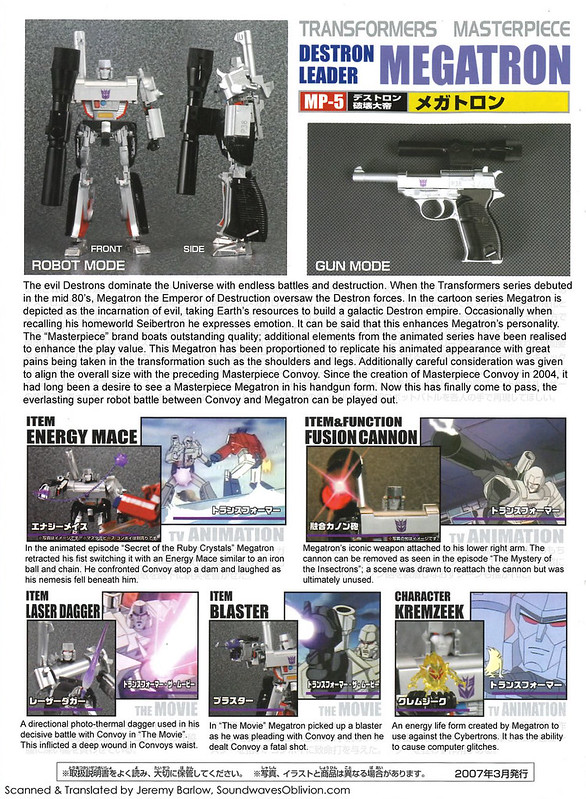 MP-5 Destron Emperor of Destruction Megatron
The evil Destrons dominate the Universe with endless battles and destruction. When the Transformers series debuted in the mid 80’s, Megatron the Emperor of Destruction oversaw the Destron forces. In the cartoon series Megatron is depicted as the incarnation of evil, taking Earth’s resources to build a galactic Destron empire. Occasionally when recalling his homeworld Seibertron he expresses deep feelings. It can be said that this enhances Megatron’s personality. The “Masterpiece” brand boats outstanding quality; additional elements from the animated series have been realised to enhance the play value. This Megatron has been proportioned to replicate his animated appearance with great pains being taken in the transformation such as the shoulders and legs. Additionally careful consideration was given to align the overall size with the preceding Masterpiece Convoy. Since the creation of Masterpiece Convoy in 2004, it had long been a desire to see a Masterpiece Megatron in his handgun form. Now this has finally come to pass, the everlasting super robot battle between Convoy and Megatron can be played out.

Item: Energy Mace
In the animated episode “Secret of the Ruby Crystals” Megatron retracted his fist switching it with an Energy Mace similar to an iron ball and chain. He confronted Convoy atop a dam and laughed as his nemesis fell beneath him.

Item & Function: Fusion Cannon
Megatron’s iconic weapon which he carries on his lower right arm. The cannon can be removed as seen in the episode “The Mystery of the Insectrons”; a scene was drawn to reattach the cannon but was ultimately unused.

Item: Laser Dagger
A directional photo-thermal dagger used in his decisive battle with Convoy in “The Movie”. This inflicted a deep wound in Convoys waist.

Item: Blaster
In “The Movie” Megatron picked up a blaster as he was pleading with Convoy and then he dealt Convoy a fatal shot.

Character: Kremzeek
An energy life form created by Megatron to use against the Cybertrons. It has the ability to cause computer glitches. 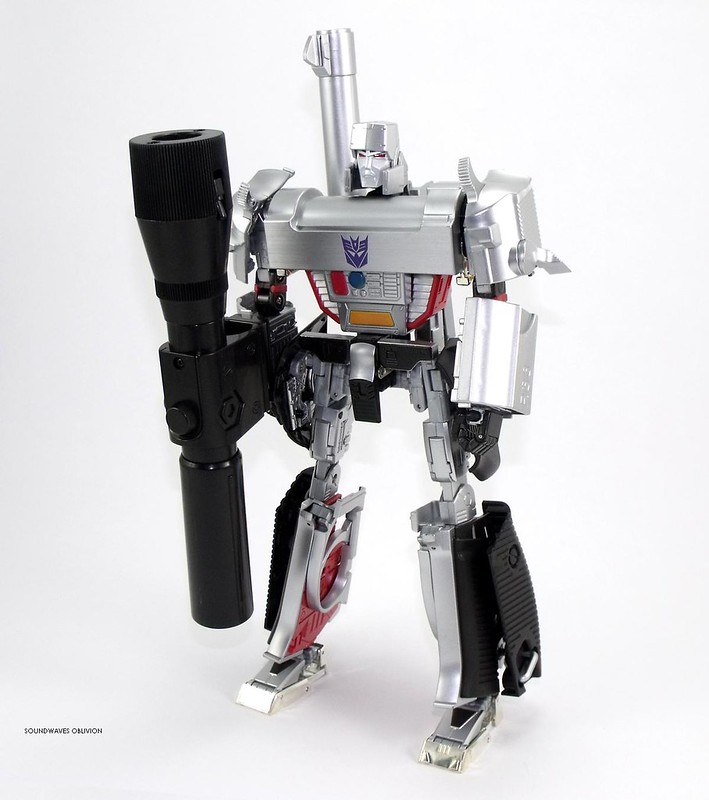 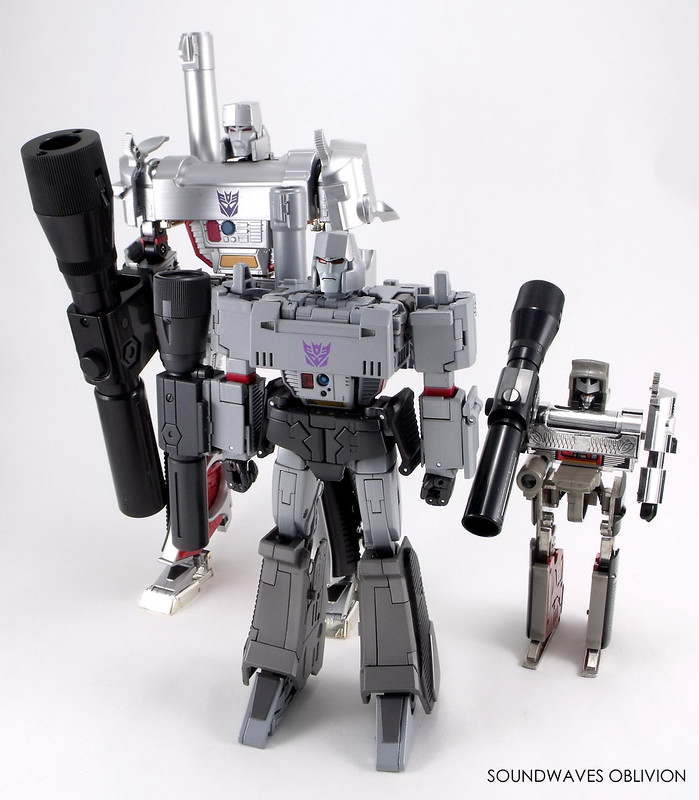 View the full gallery here on Flickr.com.
Posted by Jeremy Barlow at 12:54