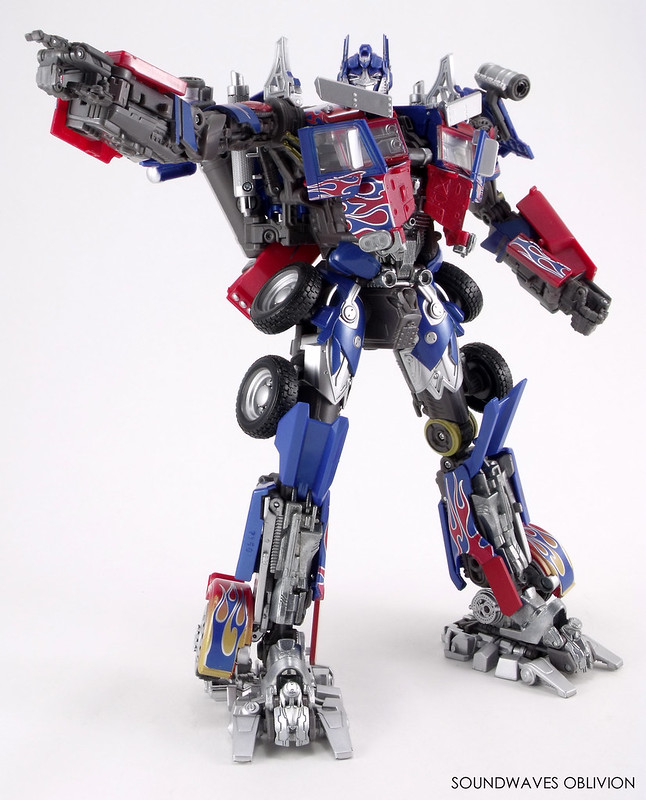 The Transformers Movie Masterpiece figures are a sub-line that sit comfortably outside of the main Masterpiece and many of these figures released so far have been hit and miss; two which stand out are Bumblebee and Barricade. Unfortunately there have been more misses than hits and Optimus Prime falls under the later. 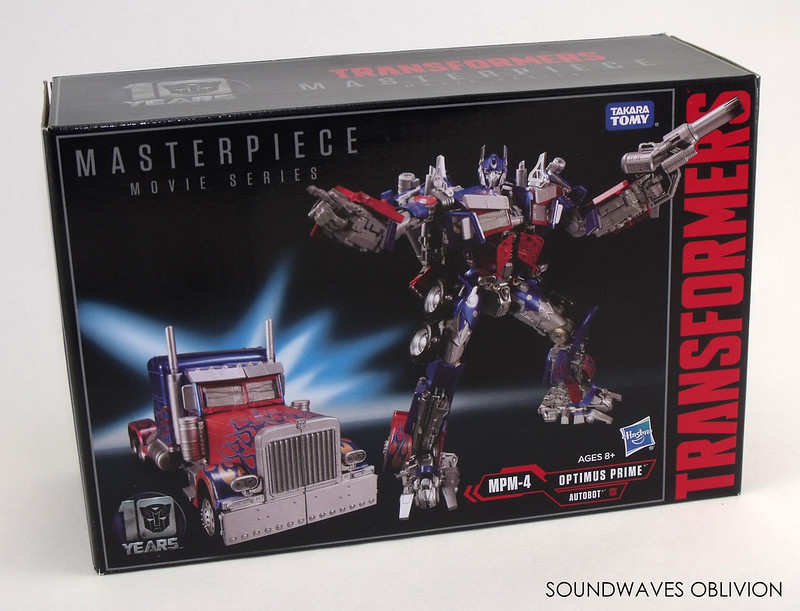 So far Hasbro figures are released first closely followed by Takara Tomy's versions; sometimes the differences are subtle with Takara Tomy using black screws instead of silver with the rest of the toy identical to Hasbro's release. Optimus Prime's Japanese release however stands out from Hasbro's in a number of ways touched upon further down. 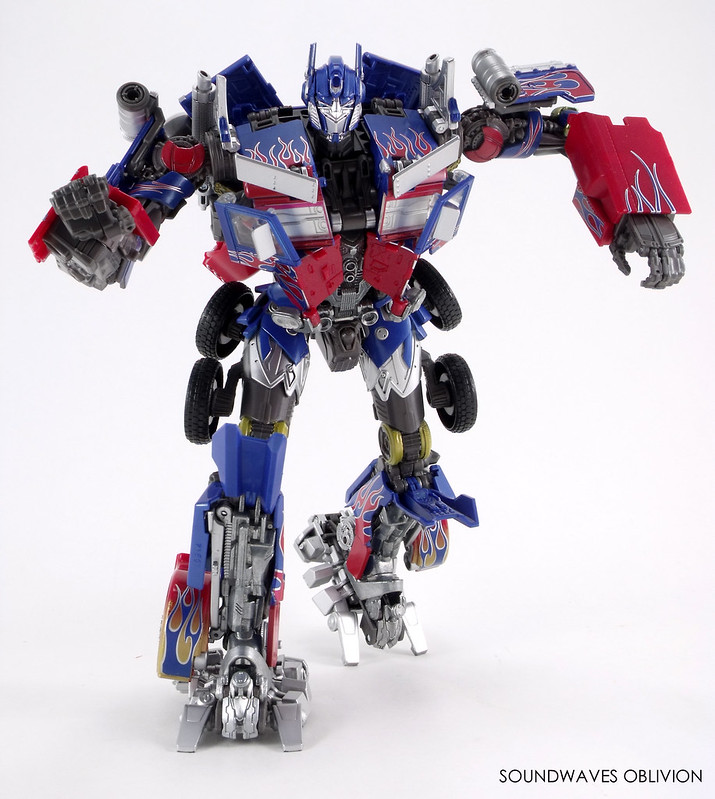 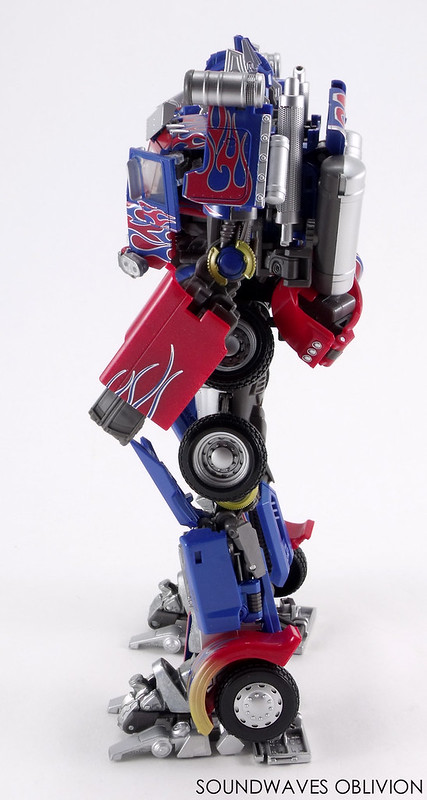 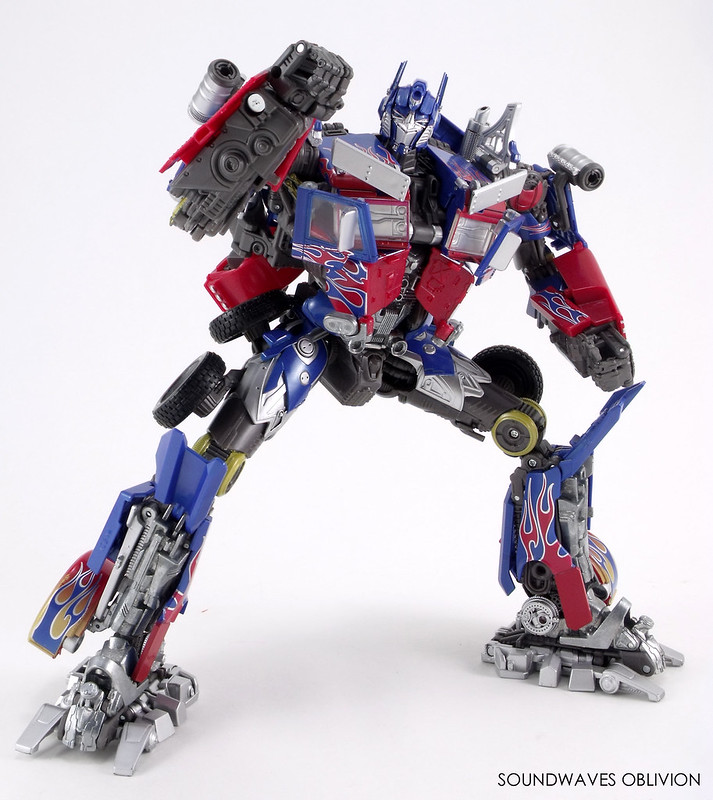 Optimus Prime was released late June 2017, the robot mode is near perfect to the CGI render of the 2007 movie Optimus Prime. He comes with two battle blades as seen in the first and second film as well as a die cast Matrix from the second film and the Ion Cannon gun. Packaged in robot mode the figure stands as tall as the excellent 2009 Revenge of The Fallen Leader Class figure, when looking at both figures side on, MPM-4 is thin unlike the chunkier leader class version. The figure also has a lot of posability which the Leader Class figure lacked including posable fingers. The robot head has a face swap gimmick which borrows from the Takara Tomy 2014 Age of Extinction Armor Knight Optimus Prime figure which swaps between the masked and unmasked faces. The energy swords are plugged into the forearms and the fists need to be turned in to accommodate however this compromise is much better than the spring loaded swords from the Revenge of the Fallen version. When not in use the swords and gun can be plugged into the back of the robot mode. Just like MP-1 and MP-10, MPM-4 has a Matrix compartment which can be opened in robot mode as seen in the 2011 Dark of the Moon film. This is fiddly and quite stiff to access but is a nice feature to have with the figure. 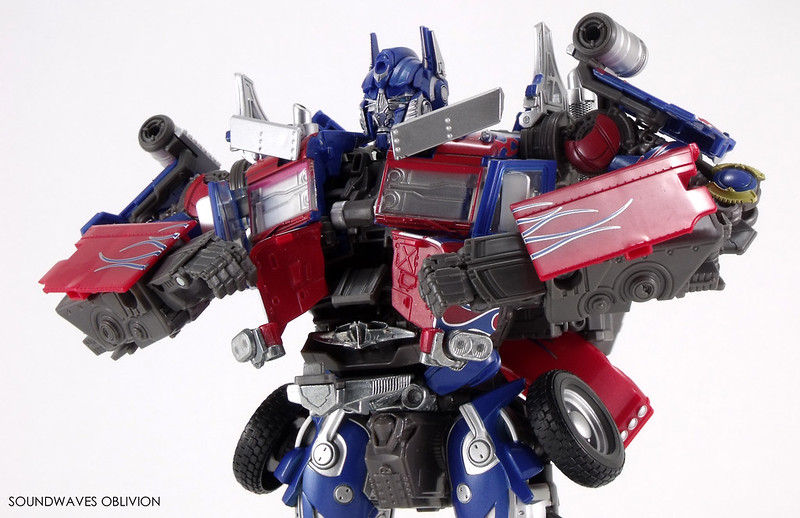 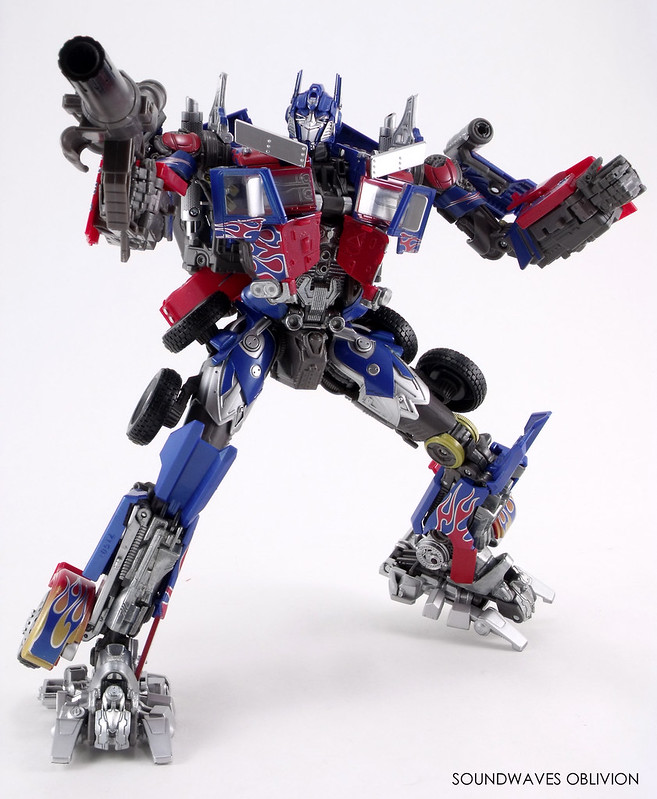 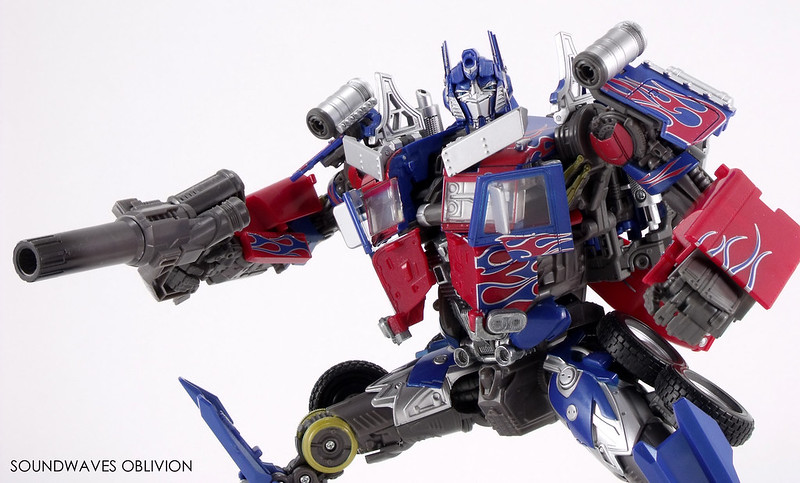 Unfortunately the robot mode is the only highlight of this figure; the transformation is similar to the Revenge of the Fallen version however it is a lot more frustrating and it is near impossible to get everything to tab in and stay tabbed in. The main snagging parts are the windows not tabbing in correctly to the body of the truck and the pipe connection to the smoke stacks do not tab in at all on either side of the cab beneath the doors. When you handle the truck mode you need to be careful as if you apply any pressure quite a few parts will untab. 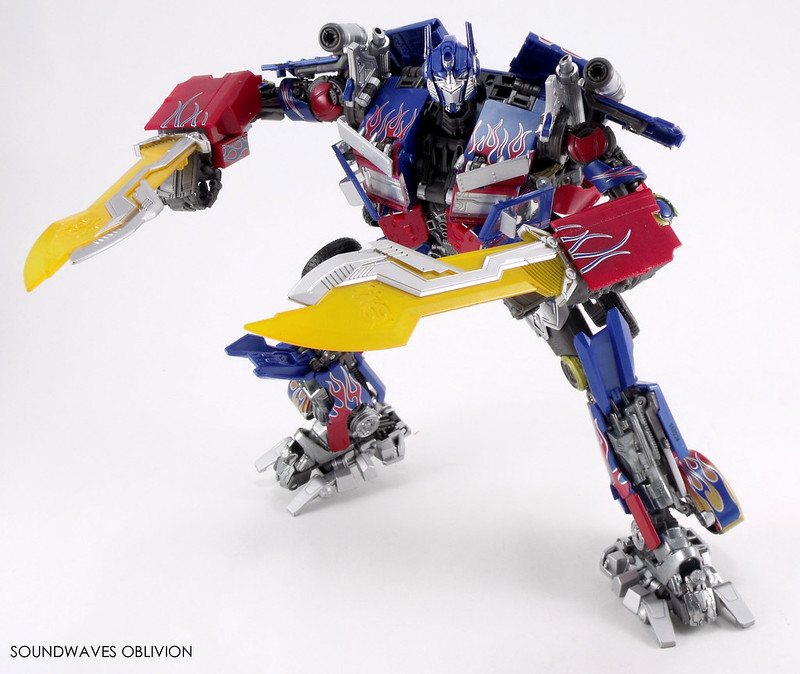 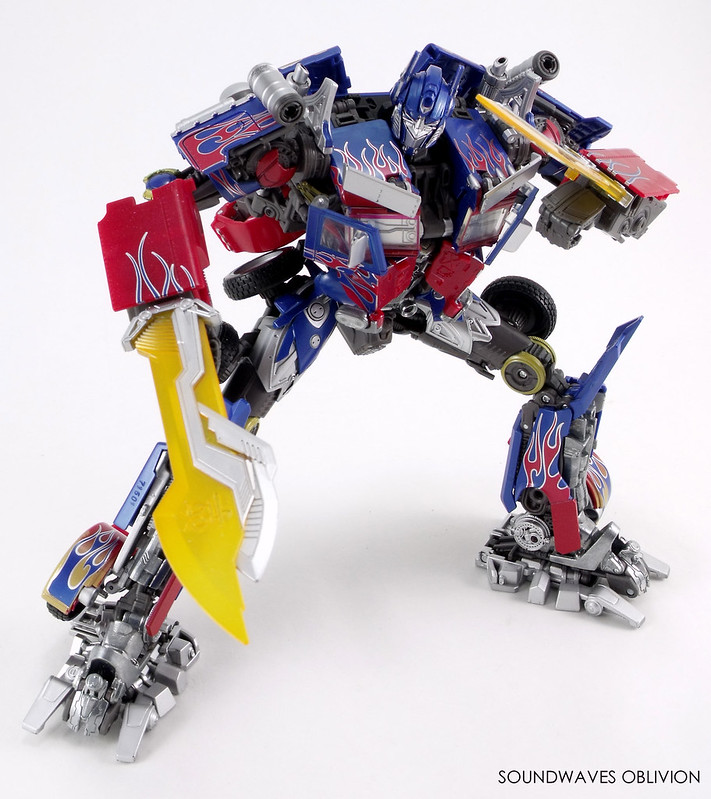 In vehicle mode Optimus Prime is a modified Peterbilt 379 truck but there is something not quite right about the look when compared to the Leader Class figures. An added bonus with the figure is that if you have the MP-10 Convoy / Optimus Prime, the trailer is compatible with MPM-4. Both swords and the gun can also attach to the back of the vehicle mode for storage which does look a bit silly really. 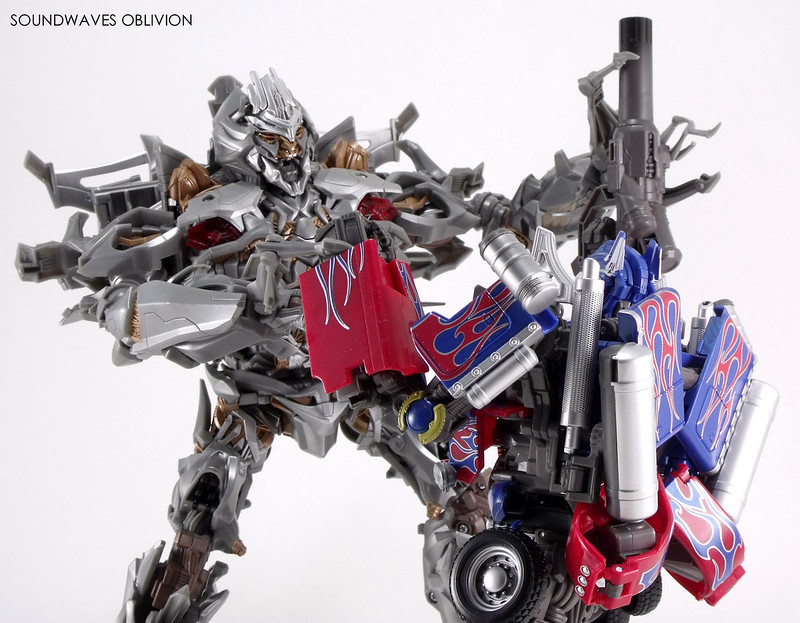 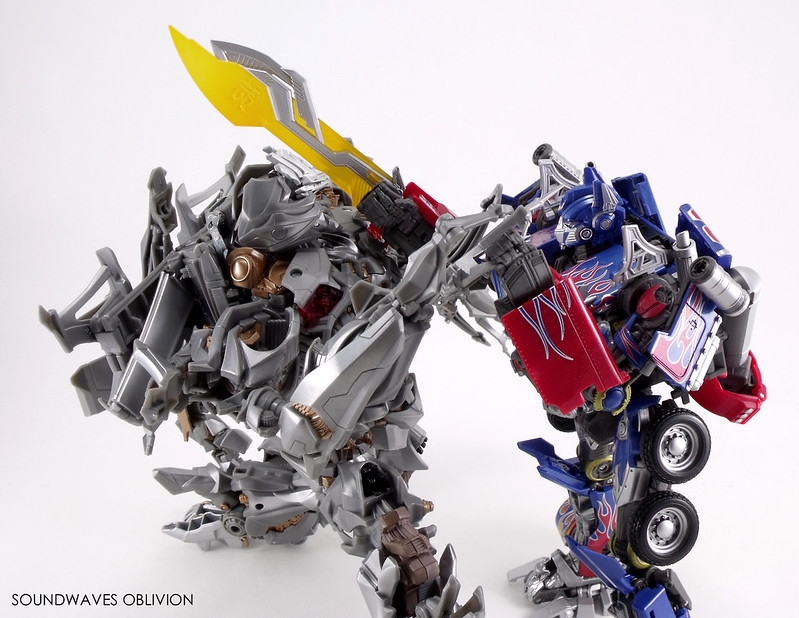 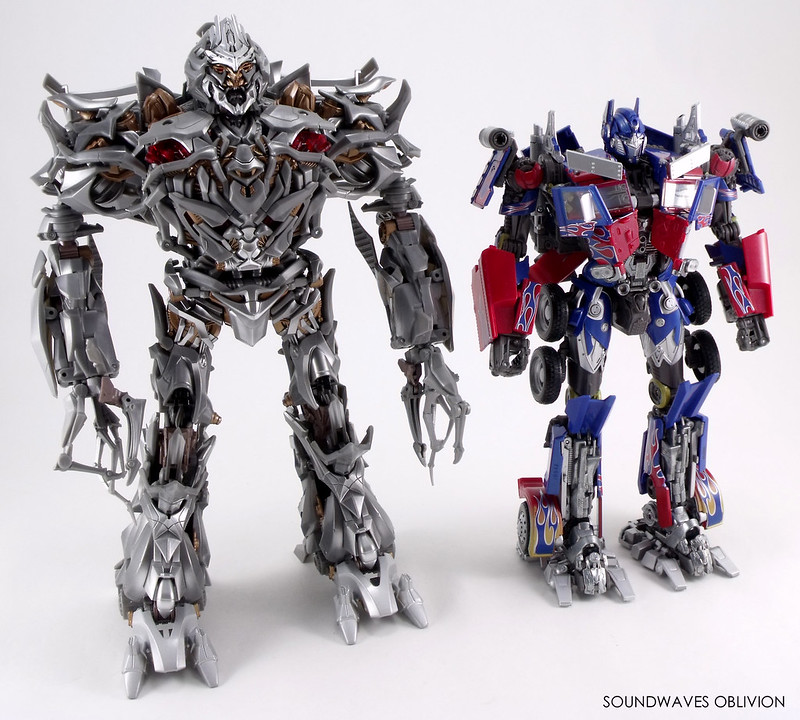 Takara Tomy released their version in September 2017 for 15,000 Yen. This version was packaged in vehicle mode and featured a few more paint applications than Hasbro's offering. Notable the figure has lighter grey plastic instead of the dark grey of Hasbro's version. The small Autobot logo on the robot modes mid section is also painted; this was left unpainted on Hasbro's version. Alignment issues are still present with this figure however the smoke stack connection issue in vehicle mode seems to have been resolved. 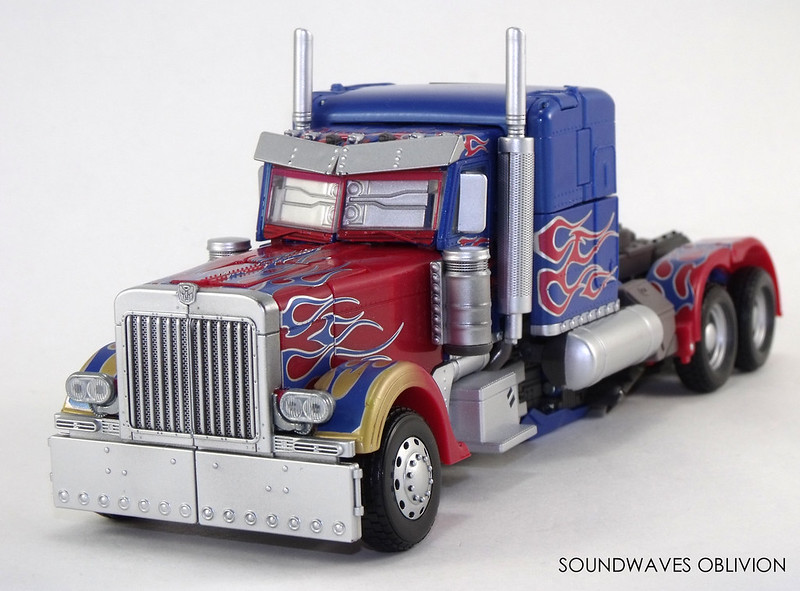 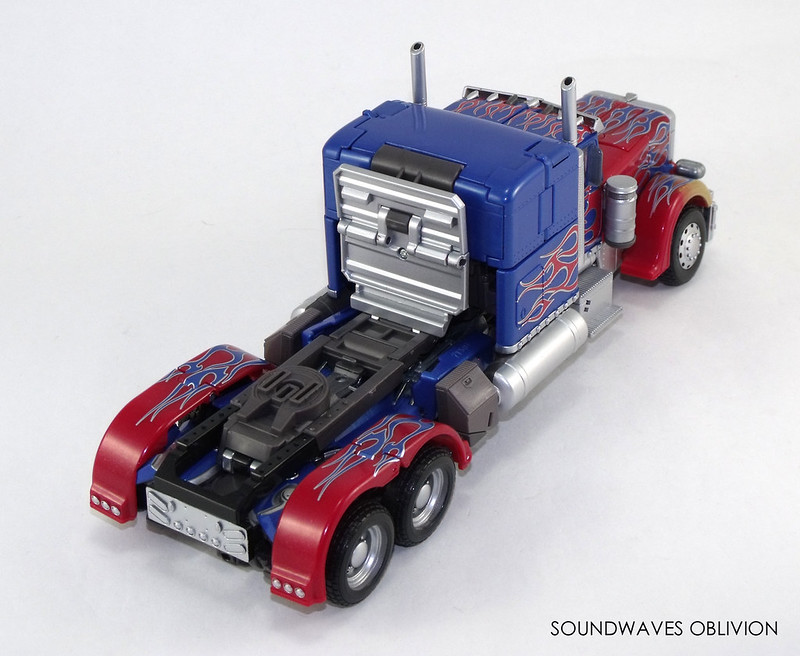 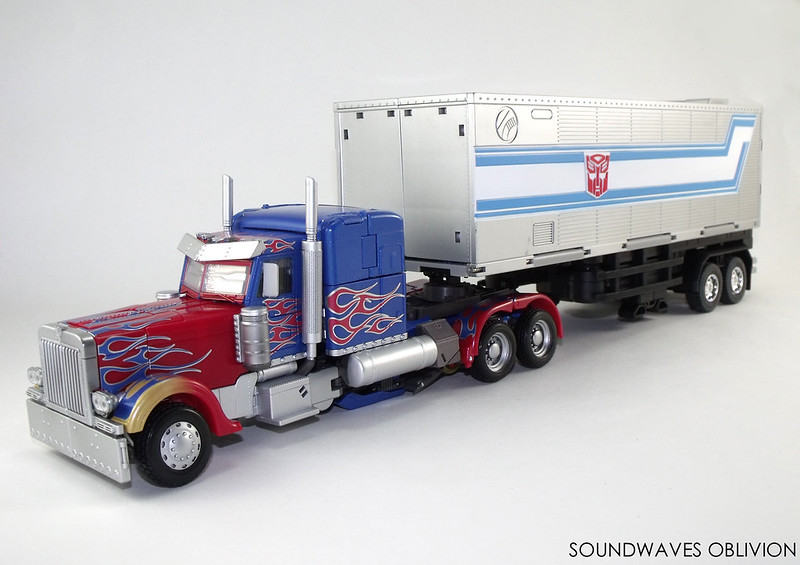 MPM-4 also has a factory misassembly which is across both Hasbro and Takara Tomy releases. The hinges on the roof section do not look flush with the vehicle mode as they have been reversed for some reason. They are held together by pins so it can be remedied however you would risk damaging the figure. This doesn't affect transformation and is really only noticeable of you look for it. 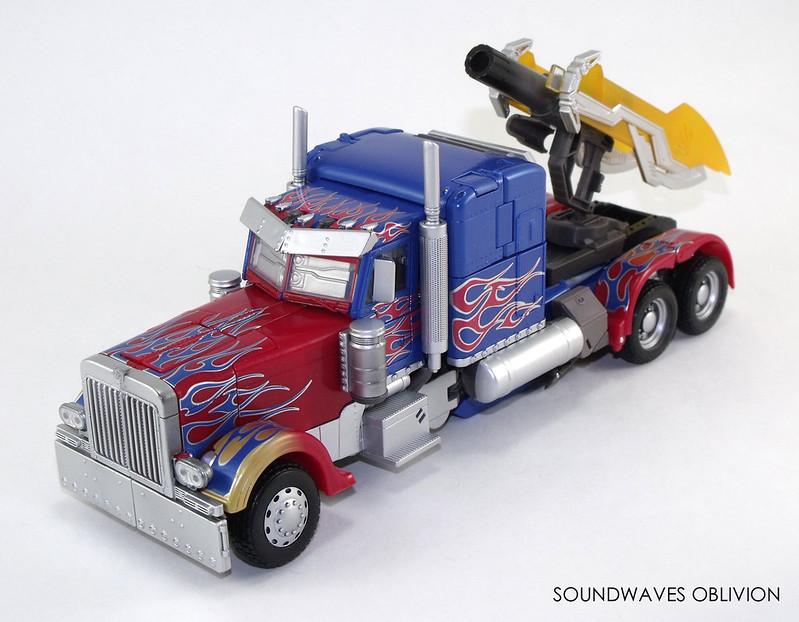 Overall this figure is not worth recommending, for the issues the price is too high and many would settle for the Leader Class mould. This figure had so much going for it but it fell short of the mark. 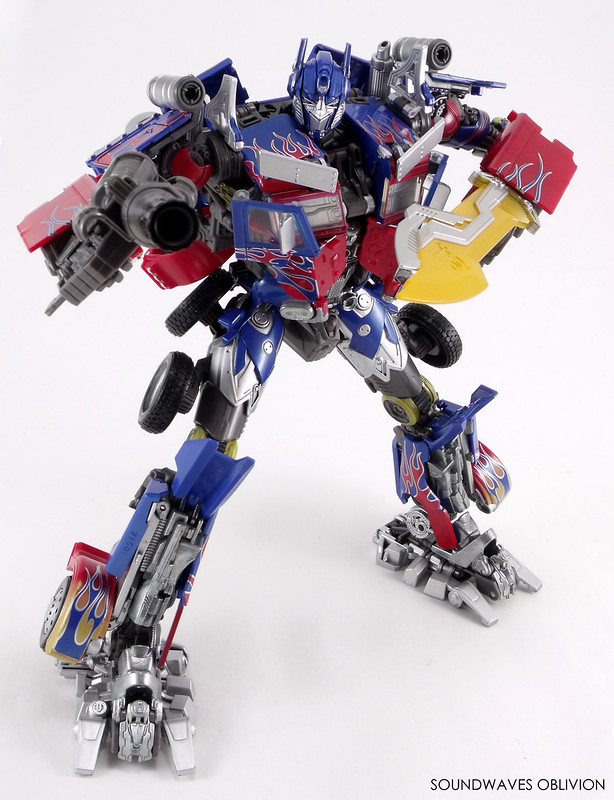